Assume the position ... means nothing 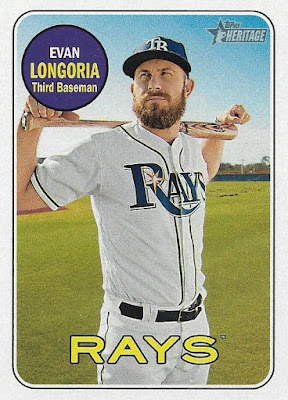 When 2018 Heritage came out a few weeks back, I was right in the middle of the collecting mob contrasting and comparing. That's what baseball card lovers with a taste for vintage do, each and every year.

I spotted the difference in position designations right away and pointed those out. But I knew this wasn't a first-time occurrence and mentioned that I didn't know why Topps keeps doing this. Is there some sort of unspoken, top-secret reason for these changes? 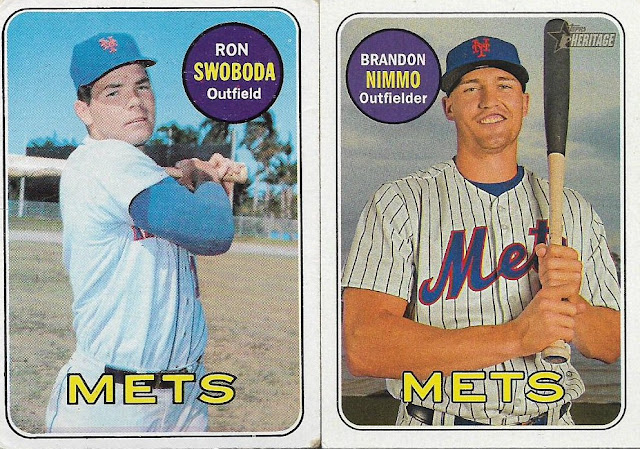 This is what I mean. Position designations in the 1969 Topps set provided the player's position: outfield.

But 2018 Heritage, for whatever reason, chooses to use the position designation to provide the player's job title: outfielder. 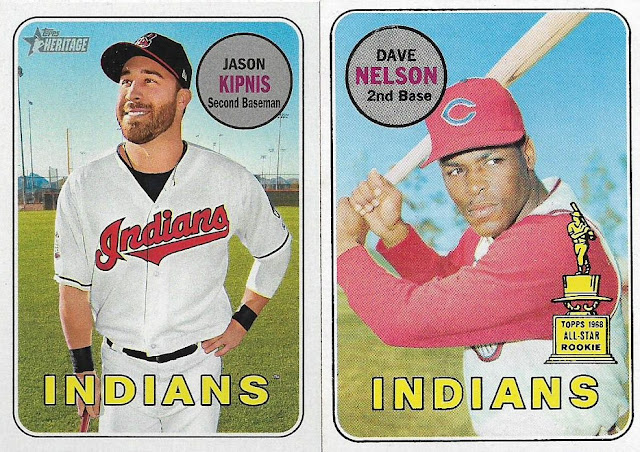 It gets very awkward with infielders. The '69 set sensibly abbreviated infield positions by using numbers, because Topps knew there was only so much territory in that colored circle.

2018 Heritage, though, doesn't care about limited territory because it can dial up the kerning on its computer program to whatever fits. Squeeze that baby to to minus 30! Does it fit? Can you sort of read it? OK, then! Print it!

Of course, very little kerning would be needed if the position wasn't spelled out, even if Topps still wanted to go with "job title" over "position name." Just call it "2nd Baseman."

Whatever the reasoning for changing things up, it is definitely a "thing" this year. 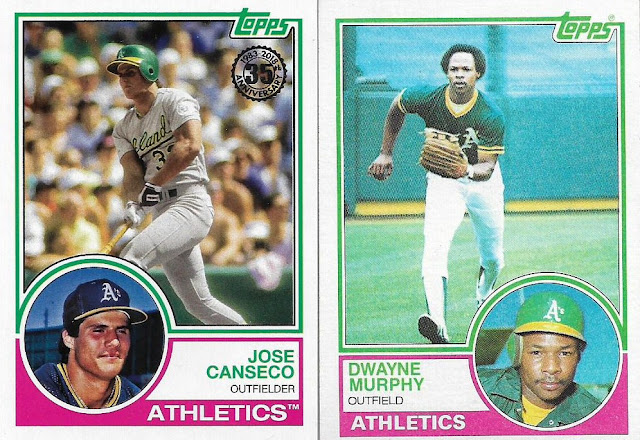 The 1983-themed inserts in Topps flagship are not only different in the fact that they're printed on slick, glossy "paper" and now feature a stamp, but the position designation also lists the player's job description instead of merely the position. 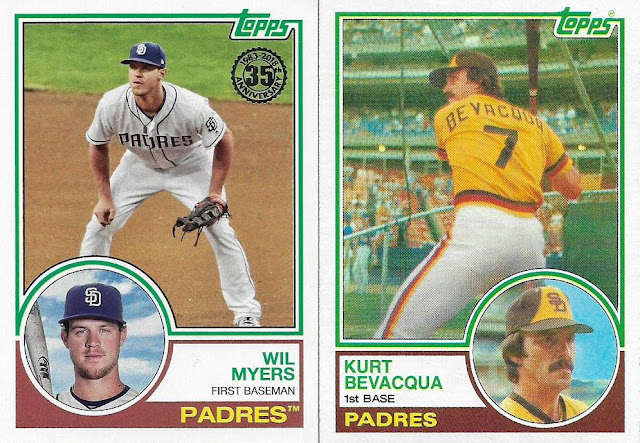 And it spells out the infield names, too. At least there's more space to work with this time.

2018 appears to be an exception, because with past Heritage sets, there was no position tinkering. 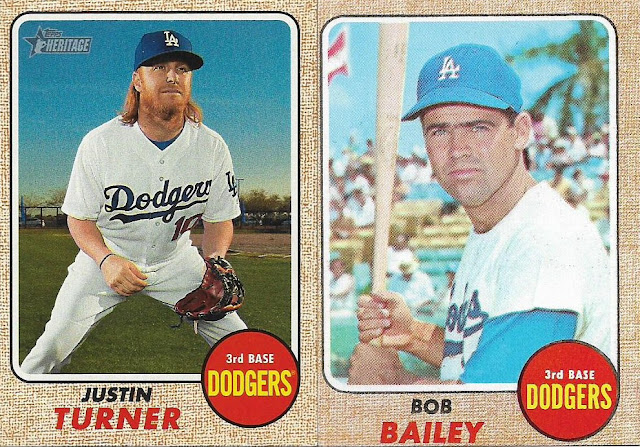 You can see that with last year's Heritage, "3rd Base" stayed "3rd Base." (Get me the head of Kendall Graveman). 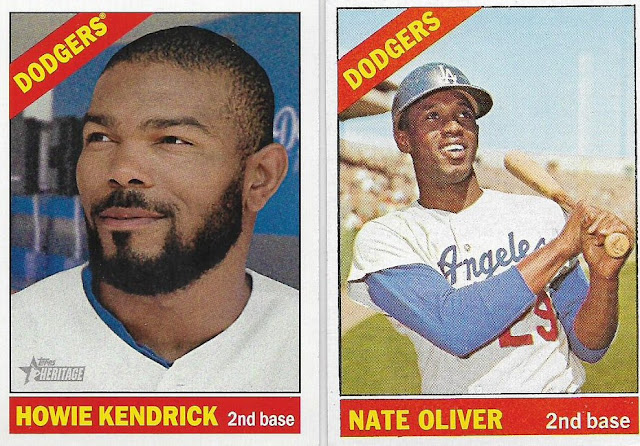 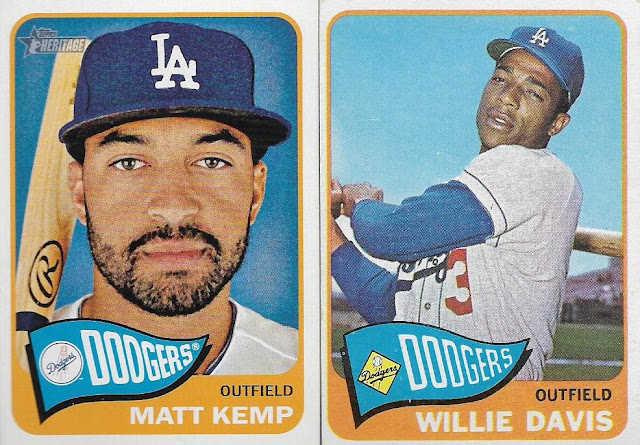 Yet, I knew I had witnessed the awkward spelling out of the positions in other retro sets. And I found it. 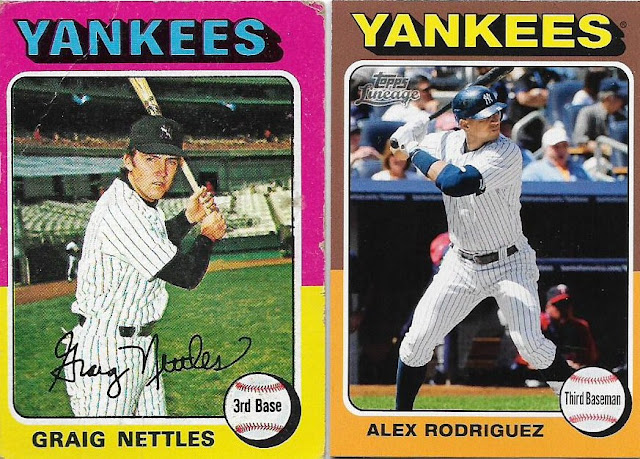 The 2011 Topps Lineage mini inserts, which pay tribute to the 1975 Topps minis, scraps the economy-sized "3rd Base" to cram in "Third Baseman" into that tiny baseball.

Before I looked through these cards I thought there had to be a reason.

Now I'm not so sure.

Take a look at a random Archives set, this one from 2014. 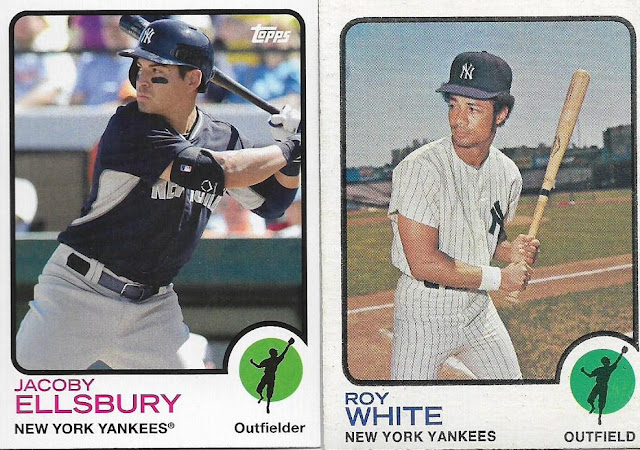 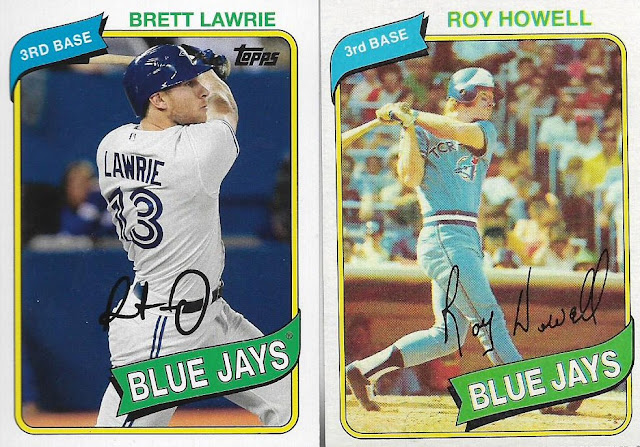 The most faithful matching when it comes to position designation seems to be the old All-Time Fan Favorites sets. 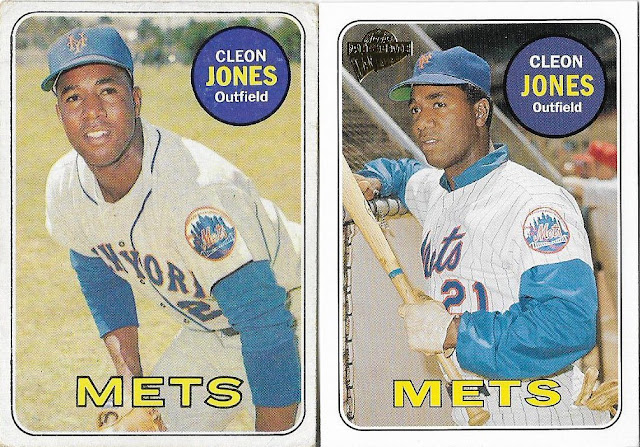 I didn't put a lot of time into examining various retro sets and how they handled the position designations. But this brief review makes me think that there's really no intent behind any of the changes.

I think with the sudden across-the-board difference in 2018 Topps, all it might illustrate is basic confusion among those putting the cards together over whether the designation is supposed to list the position or the player's job description. Maybe with turnover in the company, this gets re-addressed every few years.

If that's the case, a nice side-by-side comparison with cards from the set that you're using as your template, might be a good idea.

Jeremya1um said…
I swear they have college kids who know nothing about sports or baseball cards working for Topps and apparently since the cards are staying true to the original set wording some years and not others, they must be firing them at the end of the year.
March 20, 2018 at 9:31 PM

Nick Vossbrink said…
I don't mind the inconsistency as much as I find it baffling from a design point of view. If you know you're dealing with a limited amount of space why make things harder on yourself?

Also I really wish they'd swapped the location of the headshot circle in the 83 redos so that the ™ didn't screw up the text alignment.
March 20, 2018 at 9:37 PM

Hackenbush said…
I don't get it. Wouldn't Topps assume that a good enough portion of their customer base wants the new cards to be faithful to the originals? Is the company low on cash? Can't hire enough good people or give enough time to make things right? It doesn't seem like it would be difficult either.
March 20, 2018 at 10:06 PM

BaseSetCalling said…
What I have been wondering is -- when was the first time Topps ever wrote out "Third Baseman" completely? In the 21st Century?

Billy Kingsley said…
More than likely, it's so unscrupulous sellers can't claim it's a card from the original set, especially the sets that have players in both versions.
March 21, 2018 at 5:32 AM

The Lost Collector said…
Ellbury's position is incorrect regardless. Should be listed as "DL" or "Disabled List", not "Outfielder."
March 21, 2018 at 9:41 AM

Don said…
I also wonder about the people in charge of creating these sets. It is not just the position differences. It is the checklist, design, etc. In looking at the Gypsy Queen checklist, Anabel Sanchez is part of the Tiger team set. He was granted free agency by the Tigers on 11/2/17. I am not going to rehash my rant about Mike Aviles being in series 1 last year.

It is almost like someone looks at last year's team stats and just selects players based on the final stats, never taking the time to "revise" the checklist. If they follow baseball transactions then you would know that Sanchez was a free agent and probably should not be in this set.

I think that the company is more concerned about the bottom line than anything else. That would explain the lack of attention to detail, the difficulty in putting sets together (OPENING DAY has an insert set that the odds say are 1 in 3 cases. I will let that statement sink in).
March 21, 2018 at 9:57 AM

Once a Cub said…
This is a big reason I'm not a fan of sets like Heritage or Archives and prefer trying my own designs when making customs. If it doesn't match, what's the point?
March 21, 2018 at 12:00 PM

BaseSetCalling said…
The weirdest thing about that Aviles card last year is what it says on the back: How Acq: "Trade with Tigers"
March 23, 2018 at 12:21 AM