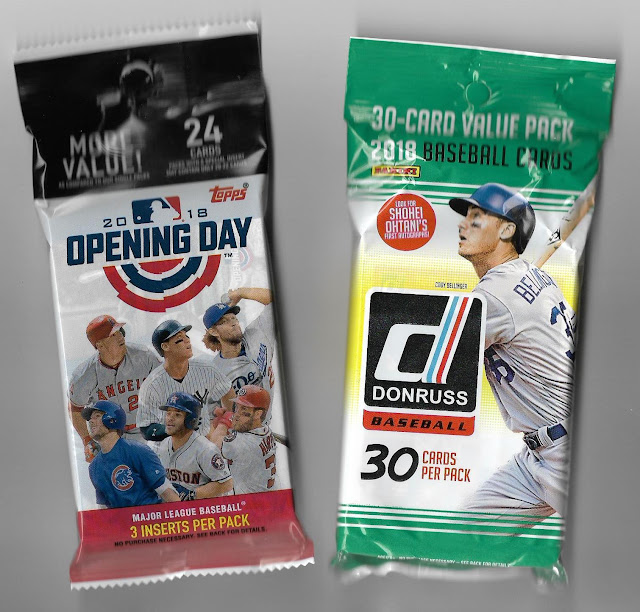 After Topps flagship and Heritage comes a number of products that don't appeal to me and I wouldn't miss if they disappeared.

Opening Day is redundant. Panini Donruss is incomplete and often incompetent. Gypsy Queen is too expensive for really ugly cards.

After that, I believe, is Bowman, which means less to me than the three other sets I just mentioned.

It's a long gap between Heritage and the return of stuff I I'm interested in, like Series 2 and Allen and Ginter. A whole season goes by before Series 2 shows up in June and A&G appears at some point in the summer.

That's quite the wait. And although I'm more immersed in vintage and other non-current collection pursuits than ever, it's weird to go so long without sampling some cards. It's been three weeks since I've sampled from my local Target or Walmart.

So, today, I was in Walmart buying the wildly random things one buys in Walmart (electric toothbrush heads, sticky notes and a pizza cutter) when I swung over to the card aisle -- although in Walmart one doesn't really "swing," they more often dodge, stop-and-start, dodge, stare uncomfortably and then dodge again in order to get to the card aisle.

When I finally arrived, before me was everything that has been released thus far. Series 1, Heritage and the three "dead zone" sets, Opening Day, Donruss and Gypsy Queen. I grabbed the least-painful options for OD and Donruss with a rack pack apiece, laughed in Gypsy Queen's face and headed for the register. 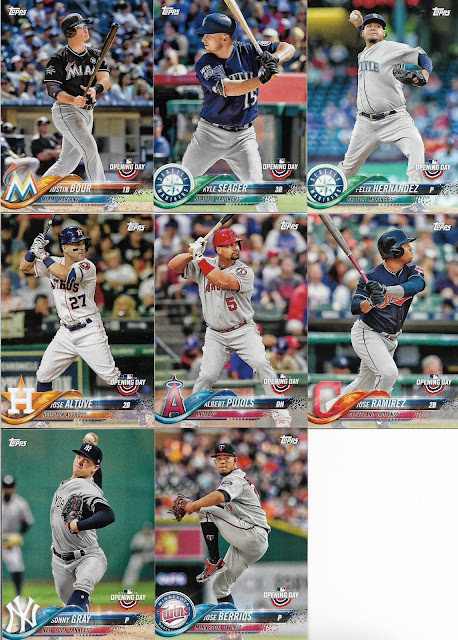 It's pointless showing Opening Day cards of players who've already appeared in Series 1, so here are the eight dudes that you'll likely be pulling in Series 2. It's not the most exciting assortment of photos. 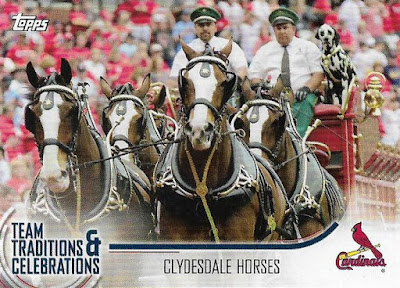 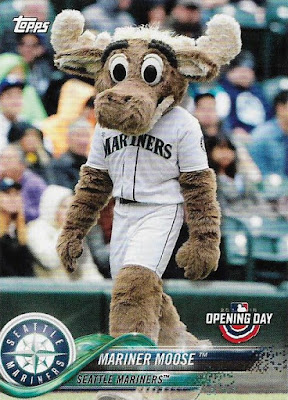 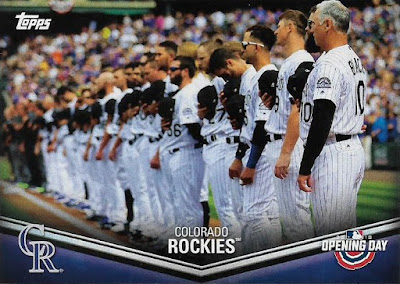 Opening Day has made its name in recent years with its inserts. Most of them aren't executed as well as they could be, but you have to love mascots.

I seem to pull Mariner Moose every year. 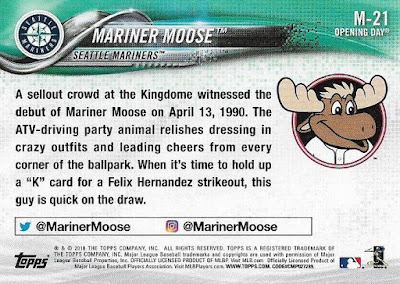 This year, there's a drawing on the back. It kind of looks like a frog with antlers.

Also, it wouldn't be Opening Day without this ... 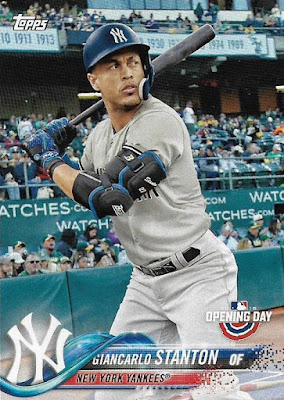 ... which is a photoshopped version of this ... 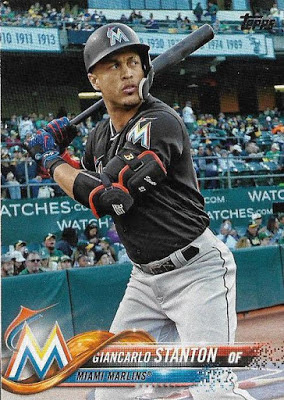 They photoshopped the orange right out of that massive arm protector.

That's about all the excitement for Opening Day. Let's take a look at Panini's latest Donruss product. 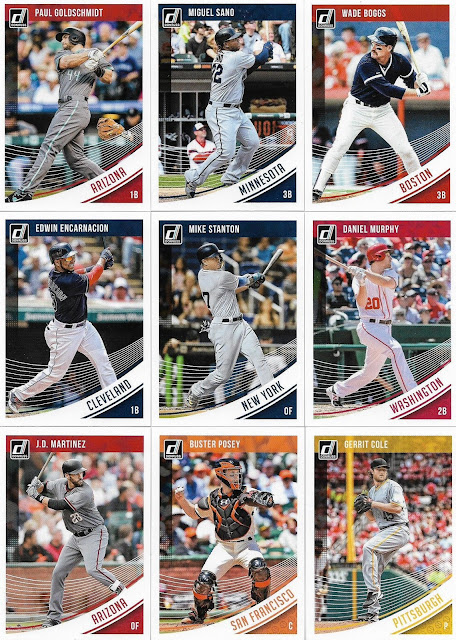 This is your base card look to Donruss this year.

After last year's colorless product, these cards look more lively. I'm struggling to understand the "sound waves" traveling through the photo. I'm assuming this is some sort of tribute to 1984 Donruss, which is the featured retro design for the short-prints this year. But it's not doing it for me.

Also notice that Stanton is with his new team but Cole is not. 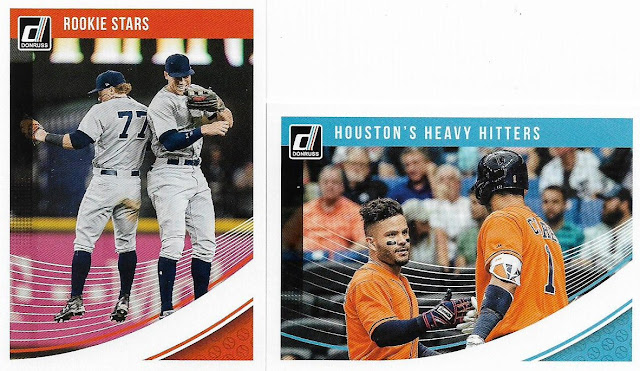 There are combo cards this year, with no words on the white swoosh. Not a good look. With no logos and no words it looks like somebody forgot to finish the card. 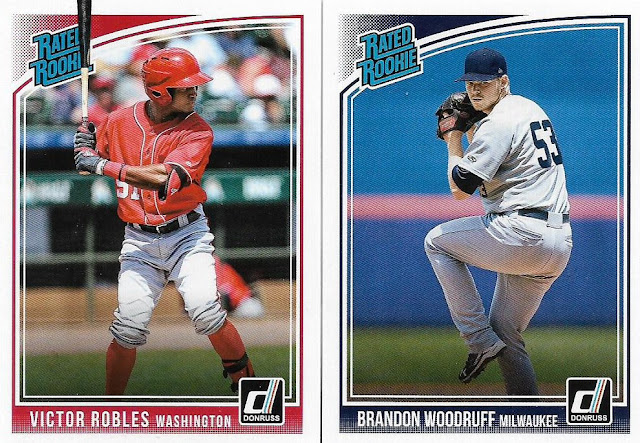 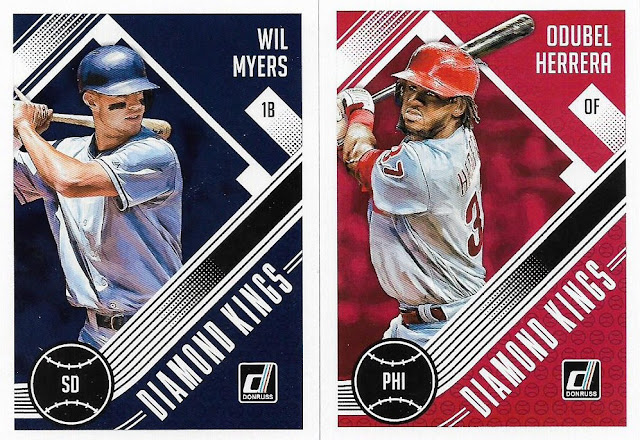 There is quite a bit of variety in these 30-card packs. Here are the Rated Rookies and Diamond Kings I pulled. Unfortunately, the Diamond King design is bordering on 2012 Triple Play territory. 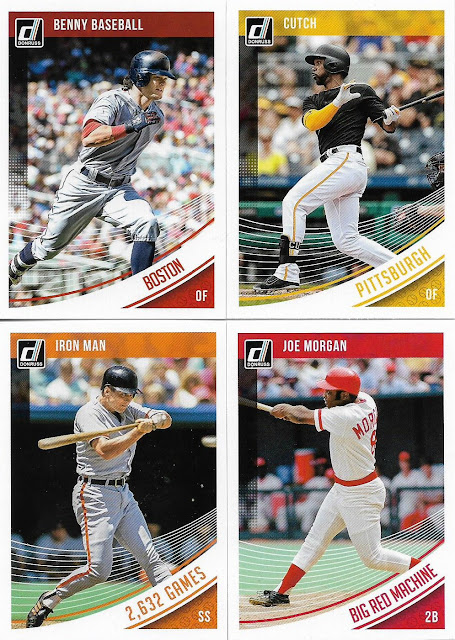 Here are what I think are nickname variations. I'm not going to pretend I'm fully informed about Panini Donruss. 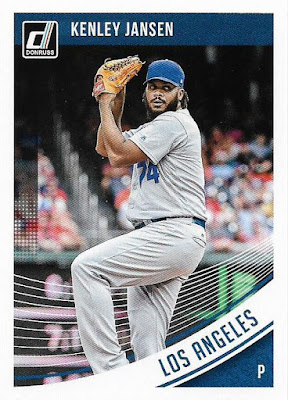 This is the only Dodger I pulled out of both rack packs. Kind of bummer because I know I won't be buying any more packs of either of these the rest of the year. 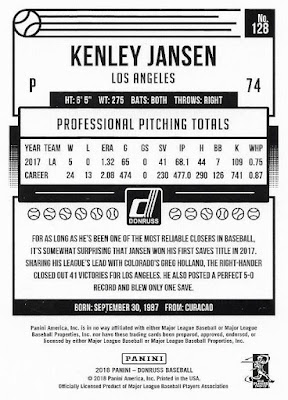 That is your look at the back. Panini tries very hard to keep you from looking at the back of its cards. It either makes the type impossible to read or creates the most mind-numbing view ever. Every last back of these Donruss cards is black-and-white. They will bore you to tears. 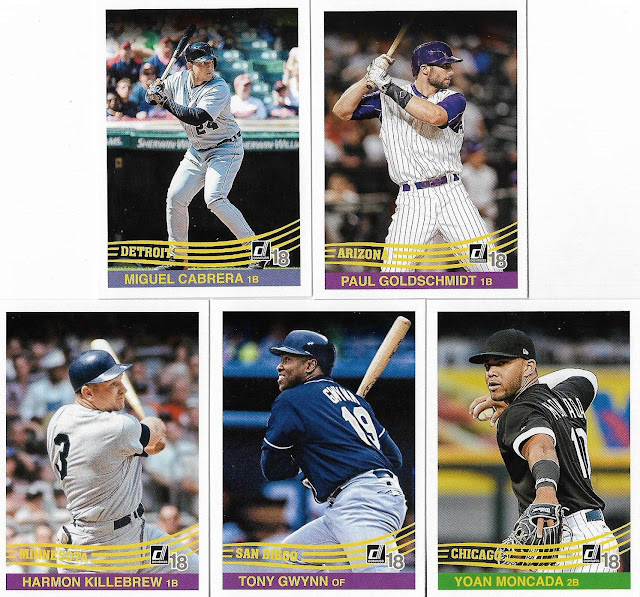 This is the only reason for collecting Donruss each year, the retro cards.

The 1984 Donruss set is my all-time favorite (the only Donruss set I have completed). I was psyched to get five of these in one pack. I was counting on maybe one at the most. They are quite nice, with classic, fat waves, unlike what's on the base cards.

Just don't look at the backs. 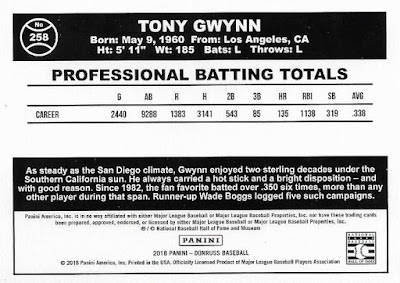 I said DON'T look at the backs!! 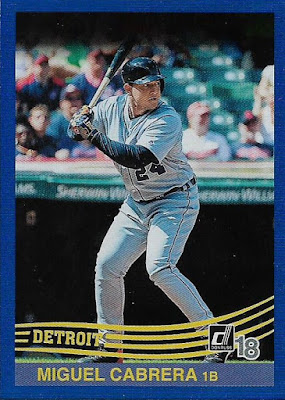 I also got a blue-bordered foily '84-themed card of Miguel Cabrera.

That's always the way isn't it? And when you hold back a couple of packages from mailing in hopes you might beef up the package with a purchase, you end up pulling no cards to put in those packages. Don't tell me this is coincidence!!!

Anyway this is about all you can find in the card aisles during the spring.

If I feel the urge to buy cards at the big box stores during the rest of the spring, I'll just go back to Series 1 or Heritage. But more likely I'll just stick to my non-current card collection interests and avoid "the dead zone" all together.

I mean you can't even see the future with one of those Donruss cards.

Jamie Meyers said…
This year's Donruss are utterly hideous except for the 1984 throwbacks. Those actually look somewhat decent.
March 26, 2018 at 8:26 PM

Zippy Zappy said…
I was curious what these two were like and thanks to you I got my answers. Thank you for your service.
March 26, 2018 at 9:14 PM

Jeremya1um said…
I actually enjoyed what I got from the Opening Day blaster my wife got me 2 weeks ago. Like you said, the inserts were nice and keep it on the shelves.
I was debating on getting some Donruss this year. After seeing how difficult the backs are to read and how ugly they look with the black and white, I’ll probably get a few packs, but not much, so thanks for the heads up.
March 26, 2018 at 10:04 PM

Anonymous said…
I got a Donruss hanger today and I was wondering if I got some sort of "hot pack" because more than half of the pack was variations or 1984 or Diamond Kings or Rated Rookies... but then I found out that they're printed in much higher quantities than they had in the past... and the funny thing is that I got pretty much the same variations, DK's and Rated Rookies that you did. I did get an actual "hit", but I'll save that for my own blog.

Two things I found out when researching this:
1) "Mike" Stanton is a variation
2) According to Cardboard Connection, variations can be spotted by looking at the baseball in the upper left corner. Base card has a white ball with black seasms, variations have black balls with white seams.
https://www.cardboardconnection.com/2018-donruss-baseball-variations-guide
March 26, 2018 at 11:23 PM

Fuji said…
I'm patiently waiting for Stadium Club and Archives. The only problem is that when they eventually get released, I'll probably never see it hit the shelves at my local Target(s)... and it's unlikely that I'm gonna buy a hobby box of either.
March 27, 2018 at 12:05 AM

Nick said…
The one thing I'll give Donruss is that you certainly get a lot of variety out of a simple rack pack, which is more than I can say for Gypsy Queen. I kinda like the faint nod to the '84 swooshes ('84 is also my favorite Donruss design) but they're really bordering into Topps territory with all these pointless gimmicks and variations. I'll probably end up buying some Donruss during my next Target run just for the heck of it.
March 27, 2018 at 12:13 AM

Commishbob said…
Ok...that makes sense. I should have guessed that. Topps isn't alone in that stuff apparently.
March 27, 2018 at 1:35 AM