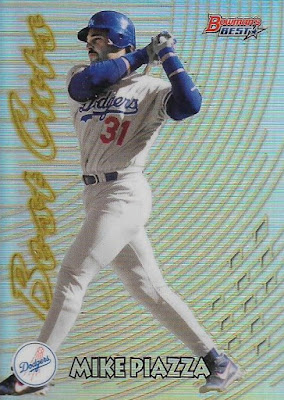 I make my living as a writer and an editor, which automatically means I am not handy around the house.

I don't want to make generalizations, but I haven't come across many writers who could build additions onto their homes. I'm sure there are those who can (and will now make themselves known), but being Tim the Toolman Taylor is not anything that I've enjoyed doing.

My father is handy around the house. He grew up during The Depression and The War. People didn't have money, they did things themselves. It was an entire nation of DIY shows. When I was a teenager, he tried to get me interested in working on the car. I'd stand in front of the engine and try to keep my mind from wandering. It wasn't that I couldn't do it, or didn't understand, it's that my brain didn't want to go there.

Now I have my own car and my own house. I often pay others to fix the car and the house. I've never been obsessed with being frugal. That seems to be "a guy trait," but I don't have it. I'd rather have something fixed right than bumble through it myself. But sometimes money is tighter and I force myself to fix things without running to someone else. I can handle the small projects, some plumbing, minor car repairs. But don't get me near electricity.

Last summer there was a hole in the foundation near the back steps. It was nothing to freak out over, but it was getting bigger and the lesson I had gotten from my father on patching concrete was fading from my memory. It was time to take action.

It's easier than ever to fix things yourself because of youtube. There are tutorials everywhere. And even though the hole was one awkward mother to patch, situated under overhanging siding, as I had to lie on my chest on the driveway to get to the spots I needed, I tackled it.

Despite my newfound confidence, it's not going to make me start undertaking a dozen home projects. I still naturally gravitate away from manual labor. I'm much better -- and much more eager -- to patch holes in my baseball card collection.

In the baseball card collecting world, sometimes you patch holes yourself, sometimes you get someone else to patch them. But there's no guilt involved in "hiring out" another collector. It's called "trading" and it's all part of the process.

Recently, Nick from Dime Boxes sent me some cards that I believe he found at one of his recent card shows (to illustrate how many card shows he finds, he's been to another card show since he sent me these cards). Several of them filled notable holes in my collection. 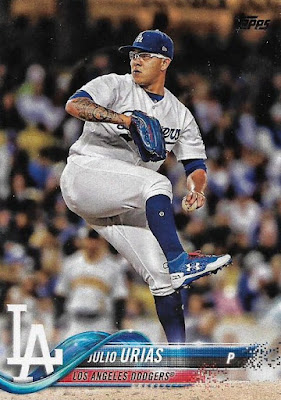 Oh, right, forgot about all those inserts. 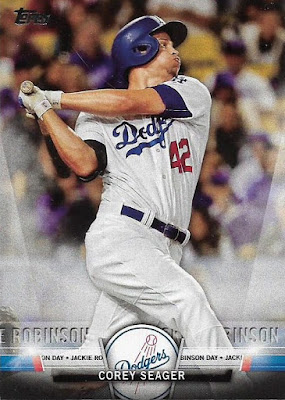 Here's one of those 2018 inserts now. Still a lot of patching ahead. 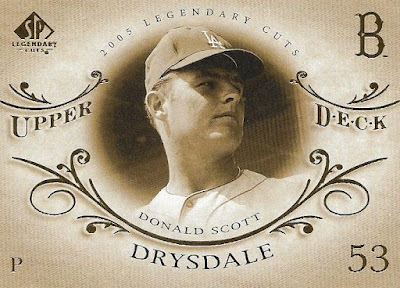 This card completes the 2005 Upper Deck Legendary Cuts Dodgers team set. Maybe not the best-looking of the legendary cuts series, but it's certainly distinctive and that makes it memorable. 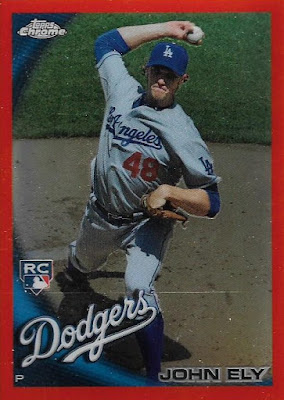 The long-forgotten John Ely makes a return appearance to ensure that I am down to Russell Martin and Manny Ramirez for my quest to complete the orange refractor Dodgers in 2010 Chrome. Patch. Those. Holes. 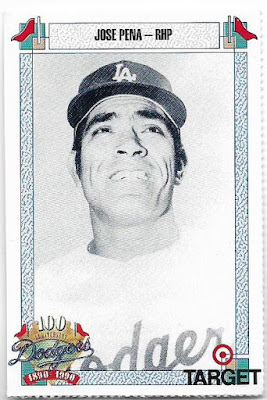 The 1990 Target Dodgers want list is more like a crater. However, I just completed an inventory on this set and put up a want list, so this Jose Pena send was like a well-placed squeeze of concrete caulk. Perfect timing with my Target want list fresh in mind. 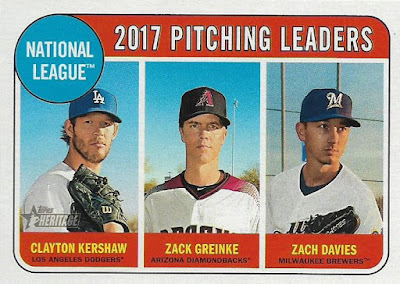 Still working on that 2018 Heritage hole. This is the last of the Dodger-related league leaders cards I needed. That leaves Pederson, a World Series card, the Bellinger checklist and four freakin' short-prints. 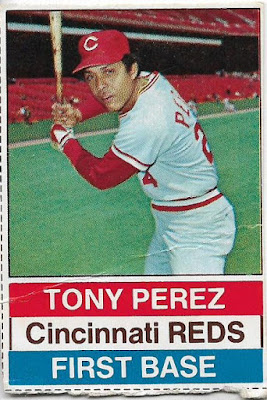 You don't need the fanciest materials to patch holes. Sometimes an oddball with a crease will do. Thanks to the advice on this post, I am collecting both Hostess panels and single cards and this '76 Perez goes toward the set where I've made the most progress, 1976. 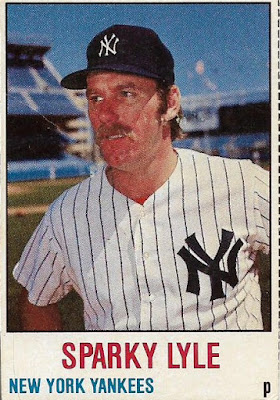 Nick threw in a 1978 Hostess of Albert Walter Lyle, too. 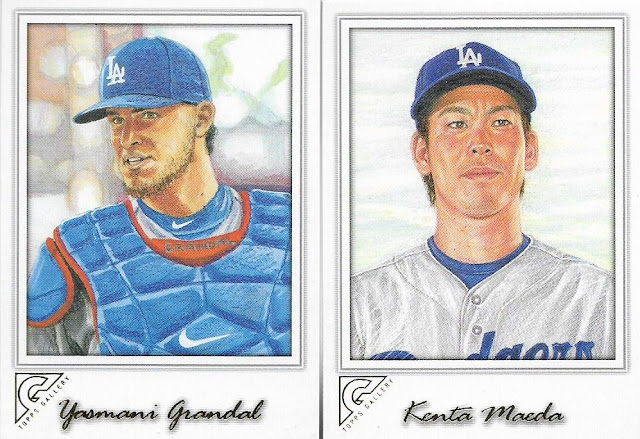 How many people bought last year's Gallery reboot? It seems it may have been limited to family members of the players and the artist and addicted card blogging fanatics.

This is why these are just my second and third Gallery Dodgers.

Major void still with this set. 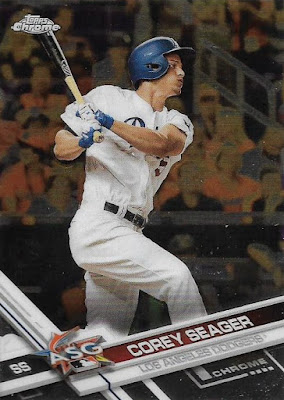 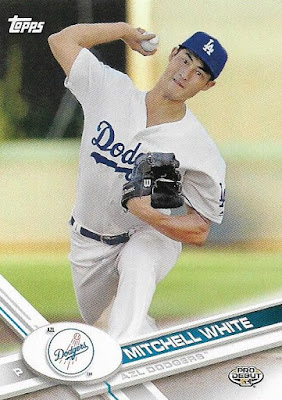 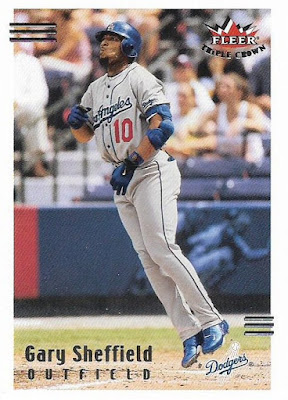 Three more sets that need plenty of patching. The first two are from last year and I basically ignored them. The last is 2002 Fleer Triple Crown. I don't know if anybody bought that set. I never see them.

Some cards aren't really about patching holes. Sure, you'd like to have all of every insert and parallel, but the tasks are impossible so why not just enjoy the ride?

So, enjoy the ride. 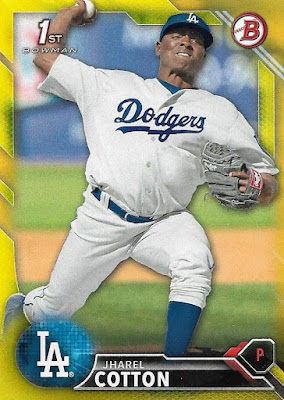 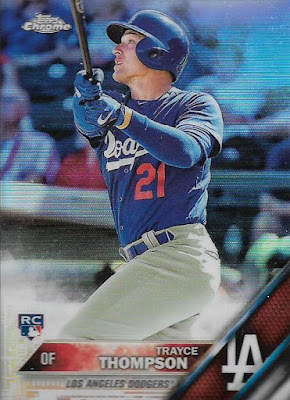 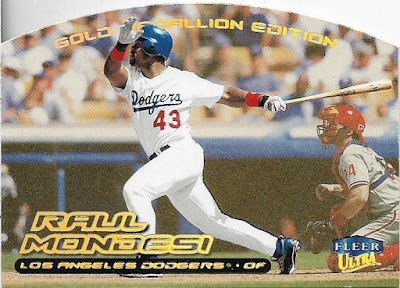 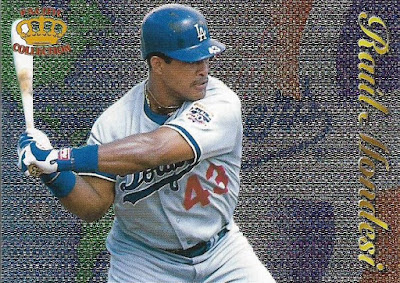 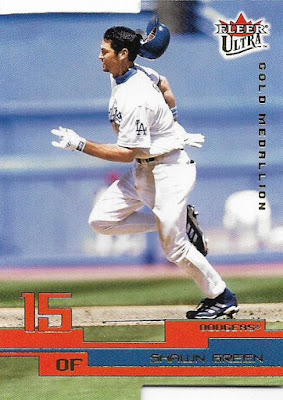 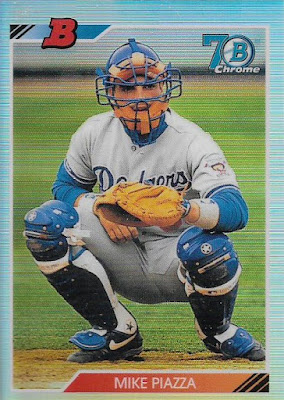 The Piazza Chrome card is from last year's 70th anniversary insert salute. You turn-of-the-century collectors may remember that Bowman has already chromed up Piazza's 1992 card. It did so way back in 2002. 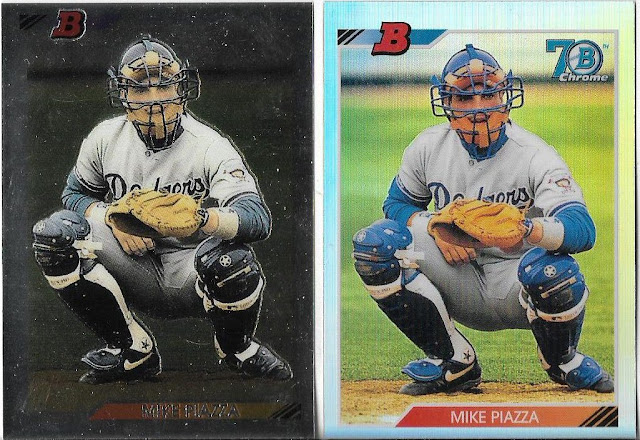 Just a slight change in chrome technology it seems. 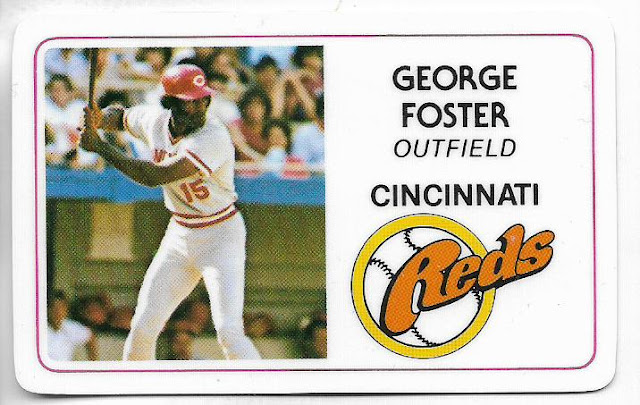 Every time I acquire one of these Perma-Graphics cards from the early 1980s it takes me back to reading Baseball Digest on my bed in the bedroom.

I was maybe 15 and over the moon for baseball and the various cardboard knick-knacks advertised in baseball periodicals. I wanted those TCMA cards and Fritsch exclusives and anything that said "hand collated" on it.

And I really, really wanted the Perma-Graphics cards.

But I had no money.

Do you remember that perpetual state of being broke as a kid? Anything you wanted you couldn't have because a paper route didn't pay for ANYTHING.

This is one of the big motivating factors of being in this hobby. I'm collecting cards for that kid who couldn't. That's why I treasure the Kellogg's cards and Drake's cards and others like them most of all.

The Perma-Graphics card patches a hole, that great big gaping hole in my collecting heart that I carried around with me for many years as a youngster. Lots of want. But no means.

So I'll take all the help I can get patching those holes. I can't do it all myself.

Anonymous said…
Great cards, and I hate to say this about a Yankee, but... That Sparky Lyle is easily my favorite.

ketchupman36 said…
Every home project I undertake ends up taking twice as long as I planned because I am incompetent in most (nay, all) handyman areas. Still, I take pride in having a job completed.
March 27, 2018 at 11:12 PM

Nick said…
I'm probably the least handy person I know. I just don't have the aptitude for hands-on projects. It's not a trait I'm particularly proud of, but one I've long learned to accept -- besides, I'd rather read novels and collect baseball cards than work on an old car (I don't even know what kind of old cars people try and restore). Glad that package couple help patch up a few holes in your collection.
March 28, 2018 at 12:21 AM

Fuji said…
Sounds like your dad and my dad would have gotten along. I don't regret a lot of things, but I do wish I would have listen to my father about cars and handyman stuff more as a kid.
March 28, 2018 at 1:14 AM

The Lost Collector said…
My dad can fix anything, including putting a car back together. He's done it multiple times. That gene completely skipped me.

But glad to see I'm not the only one who watches a bunch of YouTube videos before I tackle on a "small" home project. Last year I took down a chandelier and replaced it with a new one one, doing the wiring and all. It was a big accomplishment for me, and I still expect it to blow up or fall every time I turn on the dining room light.
March 28, 2018 at 11:52 AM

BobWalkthePlank said…
Growing up my Dad worked midnight shift for good part of my childhood. Often times he would fix things while I was in school so I didn't get the on the job training that would have probably made me much more useful today. I still call my Dad for pointers on things, but will contract out for big projects.
March 28, 2018 at 1:04 PM

Doe M.G. said…
I can't be the only one bummed about not seeing the before and after photos of said crack. The funniest DIY thread I've ever read-https://boardgamegeek.com/thread/767465/hey-everybody-look-what-i-just-did-my-toilet -Keep reading through, there will be photos. lol
March 28, 2018 at 2:53 PM

Aaron B said…
My dad is the same way. I still call him to this day to come fix things or take care of dead animals, because come on, I'm not gonna do it!

One special memory I have with my dad and collecting. My dad used to smoke when I was kid. My mother and I hated it. My dad was starting to get into collecting cards (this was during the Buffalo Bills Super Bowl Run in the early 90's). So my mom and I made a deal with my dad, if he stopped smoking, he would get an to spend that money on cards instead. Essentially an "allowance". Don't care what we call it because it worked and he never smoked again
March 28, 2018 at 3:08 PM

Mark Hoyle said…
Spent many hours with my father and grandfather learning how to fix things. Now I’m a GC. So all the people who can’t do these projects hire me or my company. So all in all it helps me buy more cards.
March 28, 2018 at 4:42 PM