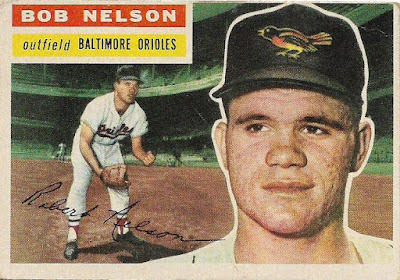 This is Bob Nelson.

He was one of the bonus babies of the 1950s, signed for a big bunch of money and then forced onto a major league roster before he was ready.

His high school career was legendary. He so dominated pitchers that he was nicknamed "the Babe Ruth of Texas." He apparently was so good of a high school player, in fact, that he gets two nicknames. His baseball-reference page says Nelson's nickname is "Babe," but you can't find Nelson by searching for "Bob Nelson," because he's listed under "Tex Nelson." 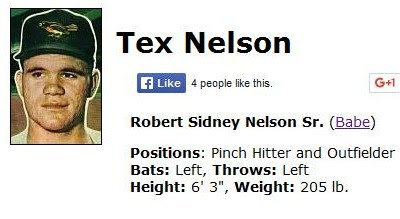 Nelson was hardly a man, though, when he played with the Orioles in 1955. Teammates noticed that the 18-year-old was overmatched. In a book detailing the mistakes made during the bonus baby era, former teammates like Chuck Diering and Wayne Causey said Nelson was a nice kid, who hit the crap out of the ball in batting practice, but just didn't have it in him to succeed at the major league level. He didn't have the toughness, he didn't have the head for it. 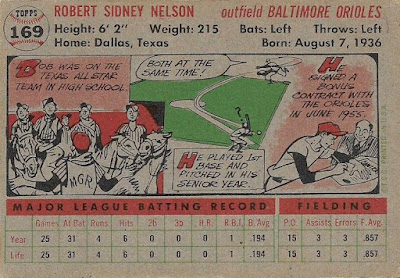 All of those high school accolades didn't matter a wit anymore. Babe/Tex Nelson eventually did find the minor leagues two years later in 1957. And he never made it back to the majors, playing in the minor leagues until 1961.

Twenty years later, I saw this card for the first time when it was one of the cards selected out of the grocery bag of '50s cards gifted to me and my brothers by my dad's co-worker.

I didn't know Nelson's background at all. Never heard of him. And there wasn't much to his stats. I remember being alarmed by Nelson's pock-marked face. As a teenager, it was a sore subject. I had no idea that who I was looking at was a teenager himself.

I'm showing this card because it's one of the 1956 Topps cards sent to me recently by Commish Bob of The Five Tool Collector. Of course, he's an Orioles fan, so I have to show an Orioles card.

Here are some of the other '56s he sent: 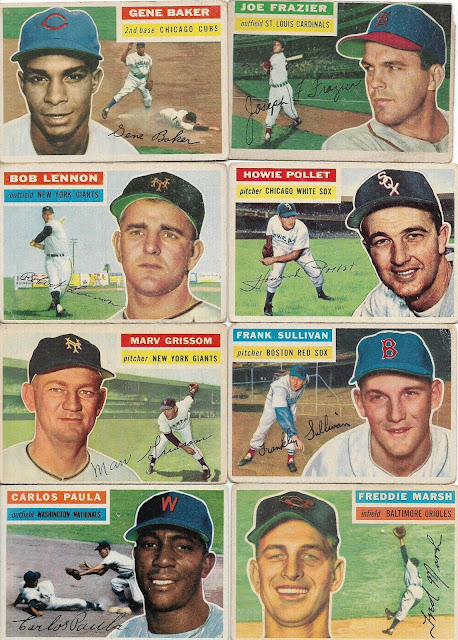 And here are a couple more that didn't fit with the others: 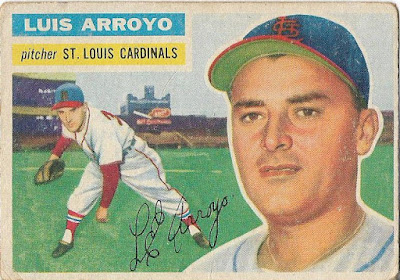 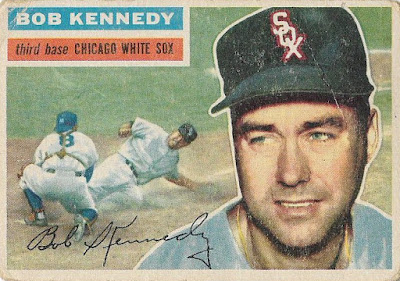 Most of these fit just fine in my '56 set quest. A couple I will probably upgrade.

As you know, '56s don't fit in customary 9-pocket pages. You have to find 8-pocket pages. They're not rare or anything, they're just not available at your friendly neighborhood big-box store. You have to order them online. And if you know anything about me and ordering things online, I prefer all of my online hobby purchases to be CARDS.

As I've said many times, shopping for pages and binders is like shopping for socks and underwear -- necessities but a complete party-pooper of an activity. I can't get myself to buy them (the pages, not the underwear) for anything. I'm currently wrapping up two weeks of vacation and do you think I could've spent 20 minutes of that vacation ordering some 8-pocket pages?

I also don't like seeing '56 cards stacked out in the open. These aren't regular cards you know.

So in a few days I'll resign myself to ordering a few more 8-pocket pages.

The sacrifices we set-collectors make.

Stack22 said…
I've found that the 8 pocket pages are't deep enough, which leaves the top row a little exposed. But they're still the best (only) option. http://www.amazon.com/review/reviews-lightbox?ie=UTF8&asin=B004L5KKMI
December 5, 2015 at 9:58 AM

Johnnys Trading Spot said…
i know what what you mean with the top loaded 8 pocket pages, the sideloaded(middle) work a little better.
December 5, 2015 at 11:36 AM

night owl said…
I prefer the top-loaded kind only because I've ruined a few cards adding them to side-loaded pages.
December 5, 2015 at 12:07 PM

Commishbob said…
For months now I've been pulling cards and other photo type memorabilia out of my old binder sheets because they were the 80s vintage PVC-based pages. I've been lucky that only a couple of things, mostly glossy pics, have had issues. So I'm in the market for good 8 pockets too. I much prefer the side-loaders. Right now though all my stuff is biding time in boxes.
December 5, 2015 at 10:57 PM

Jim from Downingtown said…
I had side-loaded pages in the 1980s, and found that the cards tended to slide out of them when you turn the pages. I remember having pages with blue, red, or clear strips where the holes are. (As I recall, the red pages were very brittle and broke vertically when flexed to turn the page).

AdamE said…
Fyi. If you ever find a card stuck in an old page or case don't force it out and potentially lose some paper, put it in the freezer for a bit. I know out sounds crazy but it works.
December 6, 2015 at 2:04 PM