My kind of woman 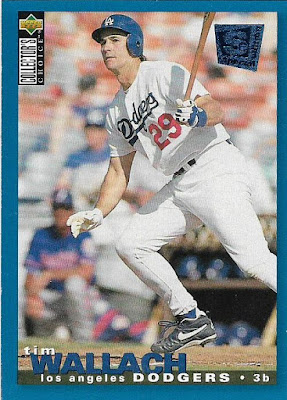 No, I'm not referring to Tim Wallach. Don't be so literal.

Out of all the card collectors in the hobby, what percentage do you think are women? Five percent? Ten percent? I'd like to go higher than that, but I can't based on my experience.

There's no doubt there are hard-core female collectors. Any woman who has run a card blog is definitely hard-core and I've come across maybe 20-25 blogs operated by women since I began my own. But that's probably not even five percent of all the card blogs that I have known.

On Twitter, I see maybe a slightly higher percentage. But it still can't be more than 10 percent. "Out in the field," it's even less. Out of all the card shows I've been to in the last 10 years I might be able to count the number of women I saw collecting on both hands. (Meanwhile, there are far more women behind the tables).

To me this is just an accepted part of the hobby. Most women don't care. I get it. My extended family is filled with women and girls -- they outnumber the men by quite a bit. Out of that group, I've found one girl who is interested in cards, and her interest might be waning.

It's just the way it is. Personally, I think every guy who is interested in sports should collect cards. If they don't, they're kind of a lost cause for me. It's what they should be doing, even if it's only a pack at the start of the season. But women, for the most part, seem to be able to separate their sports fandom and their tendency to collect. I know plenty of women who collect, but they're not accumulating sports cards.

Given the number of women in my life, sometimes I think: what would it be like if more women collected cards? Wouldn't that be great? More and more people with cards. More traders. Untapped potential!

I think this is why we bloggers get giddy when a woman starts a card blog. This is what we've been waiting for for ages. Card collecting has migrated to the other half!

More than a year ago, I discovered A Cracked Bat, which is run by Julie, and when I saw it, I'm pretty sure I thought, "hot damn, a female collector!" It didn't take long for a trade to be arranged. It helps that she has one of the better-written card blogs in our little world.

Meanwhile, plenty of other collectors have discovered A Cracked Bat and made trades of their own. And we've now come full circle, because here I am with another group of cards from Julie.

These cards were heavy on recent issues and a few throwbacks to the '90s. Let's see what came out of the ol' envelope: 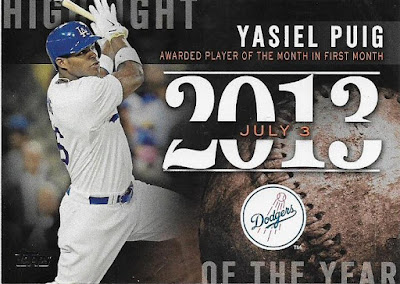 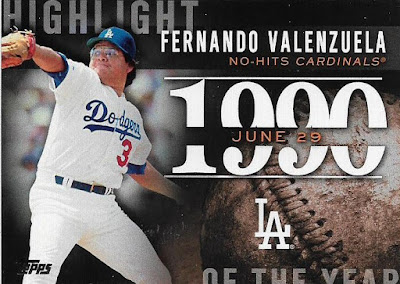 A couple of Highlight inserts from this year's Topps. There are so many of these things that there are two Fernando cards -- one young Fernando and one glasses-wearing Fernando.

However, I'm not as bored with this insert as some appear to be. I like timeline stuff. It'd be cool to have all of these cards. 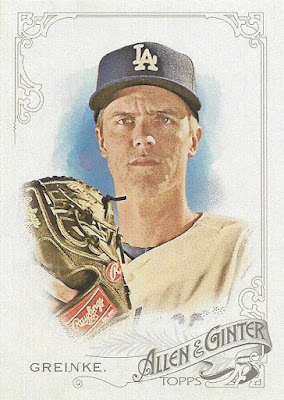 Let's get the ugly out of the way early. In the five-stages-of-grief model, I'm pretty much in the anger mode with Greinke. I'm sorry I ever liked the guy. I'm sorry I ever liked on Twitter the photo of him with his family (newborn baby included). He couldn't have gone to the Rangers or the Pirates or the Red Sox. He had to go to a team that I don't even think should be a team. He had to go to the same team that plunked Greinke near the head, setting off that big brawl two years ago. And now he's a member of that team. Gross. 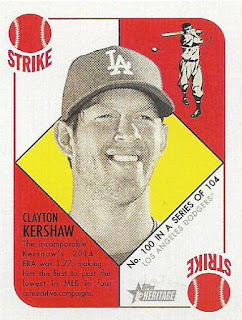 Let's move on to someone who is still a good guy. This is the only card I want from that new Topps Heritage '51 set that came out a couple of months ago.

These cards resemble the old 1951 set in most ways, except the corners are actual corners instead of being rounded. That's not really cool, but my scanner likes it. 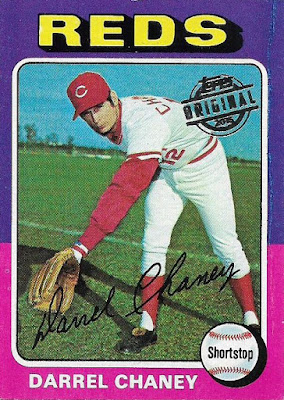 I had to pry this out of Julie's hands. She wanted to keep it. She loves the buybacks and is the biggest hoarder of buybacks in the eastern half of the country.

OK, I'm kidding. I had to speak up and say I wanted this card before she threw it in the garbage.

This is the 40th 1975 Topps buyback I now own. Looking forward to how far I can take this. Throw a buyback Robin Yount at me and there will be no stopping me. 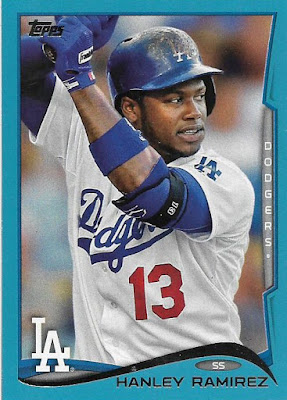 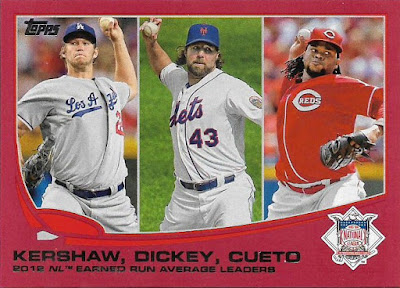 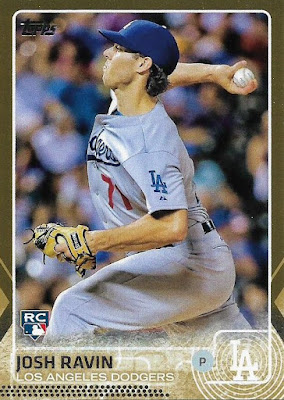 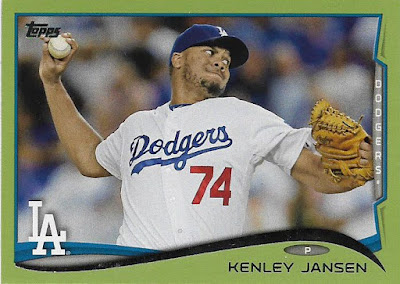 I am so much a sucker for the colored parallels. I still don't think I've completed a team set of the non-gold parallels for any set, but I'm awfully close on the 2013 cards for both red and blue. Might as well demonstrate how crazy I am and pick up the last couple. 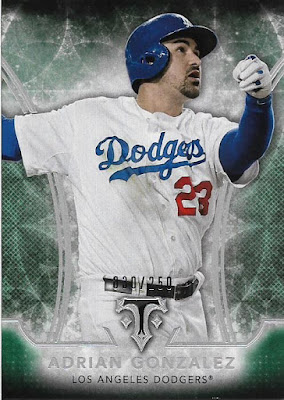 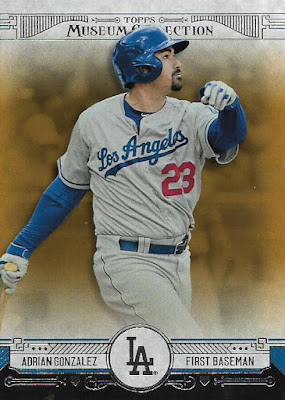 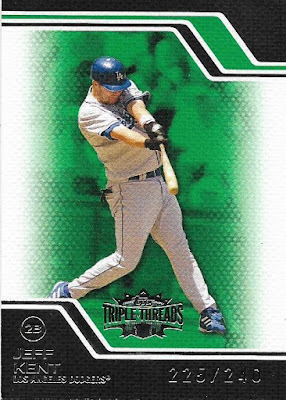 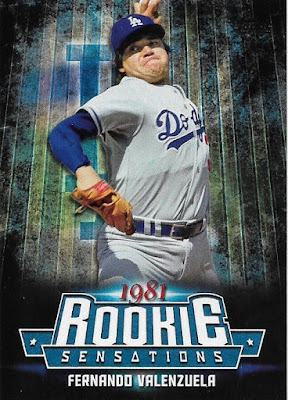 Topps is all over Fernando this year. I'm sure he's being paid handsomely. 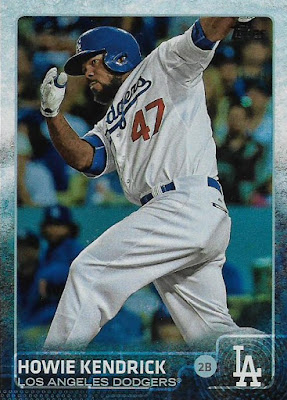 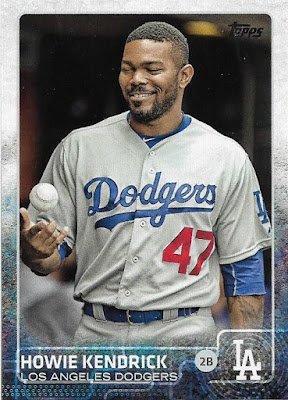 Final two cards are of the soon-to-be non-Dodger second baseman Howie Kendrick. The top card is a foil parallel.

The second card is a short-print photo variation. That's how out-of-hand the photo SP's have gotten. How many Howie Kendrick collectors are there really?

I know which way this is going. Sometime very soon, there will be a photo variation of every single card in the set. As soon as Topps figures out a way to make it feasible, it's happening. Won't that be fun?

So there you are. Some more snazzy cards from Julie. If that doesn't make you wish more women would collect and write card blogs, I don't know what will.

Lord knows I love my wife. With all my heart. But a gal who collects baseball cards? That's my kind of woman.

acrackedbat said…
Wow - Greg, that's a pretty nice write up! I'm a bit speechless...wordless. Your blog started me down this Cracked path and I thank you for it. I've learned a great deal about the hobby from your blog. I'm guilty of not always commenting but I read every post. You're a talented writer with a wonderful sense of humor, biting as it is at times. I like that.
December 9, 2015 at 9:51 PM

Adam Kaningher said…
I wonder how many of us can trace our blog's lineage to either Night Owl or Dime Box Nick. It's got to be a pretty solid chunk.
December 9, 2015 at 11:52 PM

Steve at 1975BaseballCards.com said…
That would be an interesting trivia list. I'm pretty sure my first blog was the Fleer sticker project.

A yount buyback would be quite the prize I thiInk I saw one sell on eBay for a lot more than I expected. Hope one crosses paths with you.
December 10, 2015 at 2:20 AM

BobWalkthePlank said…
We are much better as a group having Julie around. Great writer and a great trader!
December 10, 2015 at 7:45 AM