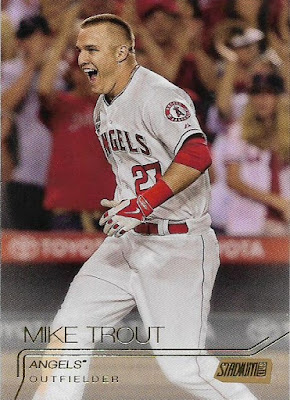 I was shuffling through some 2015 dupes the other day when the sun glinting in from the window happened to catch the card I was holding in my hand just right.

That's when I discovered that I had stuck a gold foil parallel of Mike Trout in the dupes stack.

This is really nothing new. It's happened several times already this year. With Stadium Club alone. I don't like these kinds of parallels. They're too subtle to have an impact. If I don't notice them when I'm going through the pack, what's the point? The gold foil (or black -- yes, I've put the black foil in the dupes pile, too) that was printed on the card has lost its purpose. I didn't notice.

This is why I prefer colored border parallels. Big, blue shiny bordered chrome parallels. Red and green and purple parallels. Those are my kind of parallels. Not only are they so, so, soooo pretty, but you notice them right away when you open the pack: "DAMN! That's a special card!"

But I know others don't feel the way I do. I know that because this gold-foiled Trout is selling for no less than $8 on COMC. I also know that because I've noticed the nostalgia that collectors of a certain age have expressed over the rebirth of Stadium Club and the foil parallels that go with it.

And that's because they -- and stuff like Stadium Club foil-letter printing -- came from the '90s.

All of that subtle parallel stupid first showed up in the '90s. And it's remained ever since. Searching for the similarities and differences -- do I have this card or not/is this a parallel or not? -- is the closest thing to work for me in this hobby.

For example, I received a card package from The Card Papoy last week. It was quite the thrill because I've never received cards from France before (Kevin, send me an email, I need your return address).

The vast majority of the cards were from the 1990s and the vast majority I was able to identify instantly. I knew whether I had the card or not. Even with the multitude of brands from that decade, it was still pretty easy. 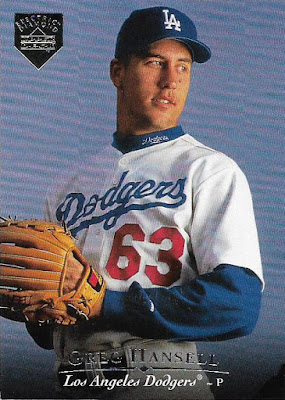 It's the 1995 Upper Deck Minors card of Greg Hansen, the Electric Diamond version.

Yeah, yeah, people say Electric Diamond was outstanding in 1995 -- I'm glad I wasn't collecting then -- but it's kind of a pain in the butt now. This card was instantly familiar to me, but I didn't know if that was because I already owned it or if I merely owned the base card.

So off to the binders I went. I went through the pages and discovered -- no, I don't have the Electric Diamond version. I also don't have the base card version in the binder either, which probably means it's sitting in my giant dupes box somewhere. 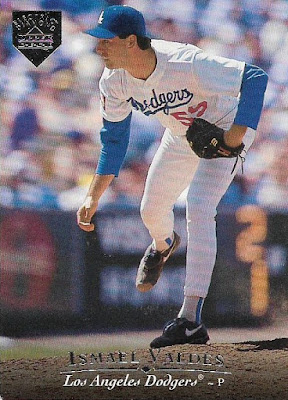 Same deal with this card. Do I have it? Do I just own the base card? Another trip to the binders. And the discovery: it's new to me!

OK, I don't make a separate trip to the binders for every card. I usually stack up the parallels I'm not sure of and then make one trip at once. But it's still pretty tedious. And there's the whole overriding thought going through my head: the regular card and parallel card are the same card.

But collect it I must. 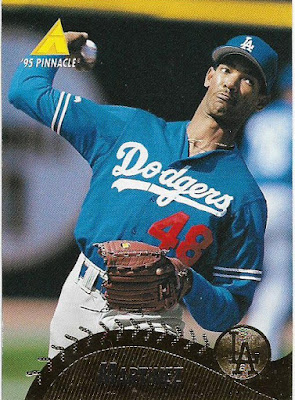 This is the base version of Ramon Martinez's 1995 Pinnacle card. My records say that I own this card already. But during a check for foil parallels, I came across my '95 Pinnacle Dodgers cards and realized that what I actually own is the Dufex parallel. 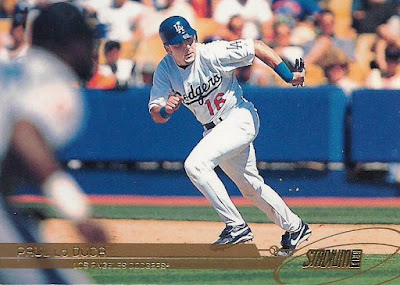 This one I caught right away. A gold bar is much more different than a silver bar. More parallels like this please. 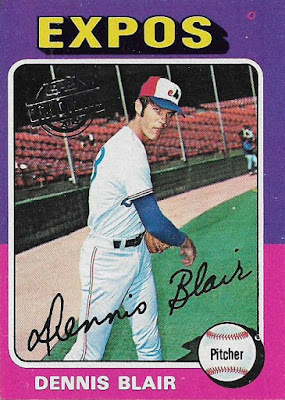 Here is a parallel that isn't from the '90s, but its heart is in the '90s. Foil stamping is the only difference and that is so 1994. But in this case I am gladly adding these '75 buybacks to keep the '75 collecting dream alive. 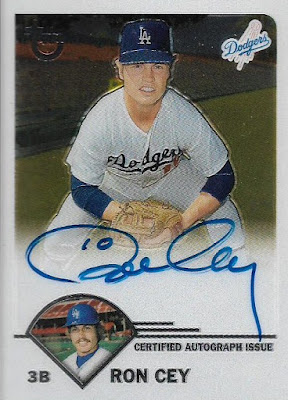 Here is a noticeable parallel that's right up there with colored border parallels. Autographed cards are so impressive that you don't even notice that many of them are parallels. The thing that throws me about this card is the vast age difference between Main Photo Cey and Inset Photo Cey. 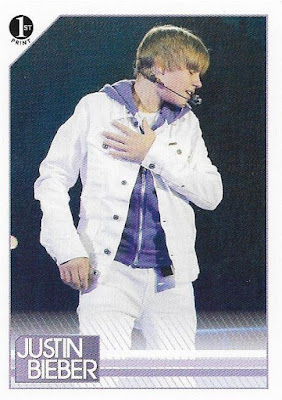 Of course it wouldn't be a Card Papoy package with out a Bieber Fever card.

Here is how little I know about Justin Bieber:

I know he's a singer and he's Canadian and that little girls used to like him. That's it. I can't tell you one song that he has sung or anything else about him.

So, yeah, take all that parallel talk for what it's worth -- an old man who likes his clearly defined, short-and-sweet 1970s cards. The guy doesn't even know a Justin Bieber song!

And I collect what I must.

Twitch said…
As the unofficial "Annoying-'90s-Kid-in-Residence" of the cardsphere, I'm actually in agreement with you in this instance. I have a pronounced dislike for throwing an extra tiny foil stamp on a card and calling it a parallel, or in the case of 2015 Stadium Club, merely changing the color on an EXTREMELY THIN font. The only real exception I can think of for this is 1995-96 Upper Deck basketball Electric Court parallels, where the little basketball dude is getting electrocuted.

JayP said…
I've always felt like subtle, sometimes hidden parallels and SPs are the card companies' ways of "sticking it to the consumers"
December 29, 2015 at 12:10 AM

AdamE said…
You don't like the dufex parallels? They are not even close to throwing a little foil on there and calling it different. The dufex (it does have many names which can be confusing though,dufex, pinnacle collection, museum collection) was and still is the greatest parallel ever.
December 29, 2015 at 4:00 AM

Anonymous said…
"If I don't notice them when I'm going through the pack, what's the point?"
-I couldn't possibly say it any better.

That said, I've got to agree with AdamE. Dufex parallels are just about my favorite card thing of all time. To me, that's what a parallel should be.
December 29, 2015 at 8:48 AM

night owl said…
Dufex is another "tilt it so you know it's a different card" thing. It's more apparent than the foil stamping because it's all over the card, but I'd prefer I didn't have DO things to my card to determine it's different.
December 29, 2015 at 12:20 PM

AdamE said…
Tilt? You shouldn't have to tilt dufex to see that it's different. They are vibrant, the colors pop right of the card. Yeah, tilting makes then change colors but they pop with no tilting involved.

(I'm going to stop now. It makes no sense that the semi-color blind guy with no writing skills is trying to describe the wonder that is dufex to the color conosour himself,the writing machine, Night Owl.
December 29, 2015 at 1:53 PM

Drew said…
Ugh, totally agree on those pointless parallels. I don't understand the need at all, especially when player/team collecting. And unfortunately, Justin Bieber is making a "comeback".. until his next trip to rehab, of course. The Bieber fever, or plague, has not ended yet.
December 29, 2015 at 8:42 PM

Fuji said…
I too wish card companies would make their parallels stand out more. However... I must admit, I've added a handful of those Stadium Club parallels to my collection because the vendors threw them in their dime boxes/quarter bins.
December 31, 2015 at 10:19 PM

Chris said…
I thought the original concept with the 1993 Stadium Club "First Day" parallel was pretty cool. I remember ripping packs hoping to get one. Even if it was only Oscar Azocar. I always wondered how momentous of a task it won be to put that set together. Probably easier now with the amount of ripped product out there. When they make a card obvious like the 94 Electric Diamonds, or the pinnacle Artist Proofs, or Ultra Gold Medallions that was fine, but when it is as subtle as a tint of copper, bronze, silver, gold, or steel. Then you are really tasking my old eyes.
January 3, 2016 at 11:41 AM