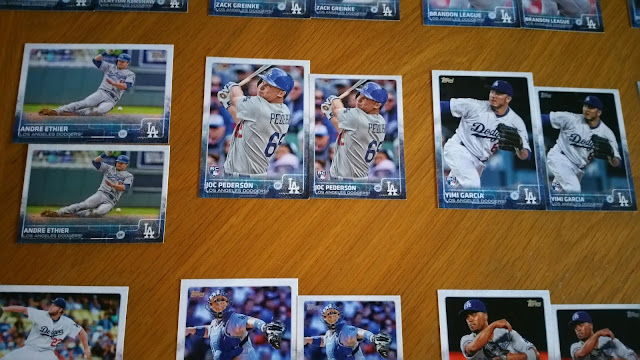 This is the year we're supposed to be saluting the 1975 Topps mini. It was 40 years ago that one of the first parallel sets ever was released.

I have done a couple of special '75 mini posts in the past year. But I don't need an anniversary to talk about my favorite set of all-time. I hope I will always have things to say about the card set from my childhood that is now iconic.

So here is one more tribute to that 40-year-old set, featuring one more self-tribute from Topps.

As you probably know, Topps recently released an online exclusive of its 2015 flagship set in mini form. You fork over 100 bucks and you get every card from flagship in mini form, plus 10 extra cards of current players on the 1975 mini design.

Mini fan that I am, there is still no way I'm paying $100 for a parallel set, just for 10 cards on my favorite design.

Fortunately, I was able to get the cards I wanted without doing that.

My good friend R.C. decided to purchase the full set online and then decided he wasn't very keen on it. He generously sent me the Dodgers from the mini set. 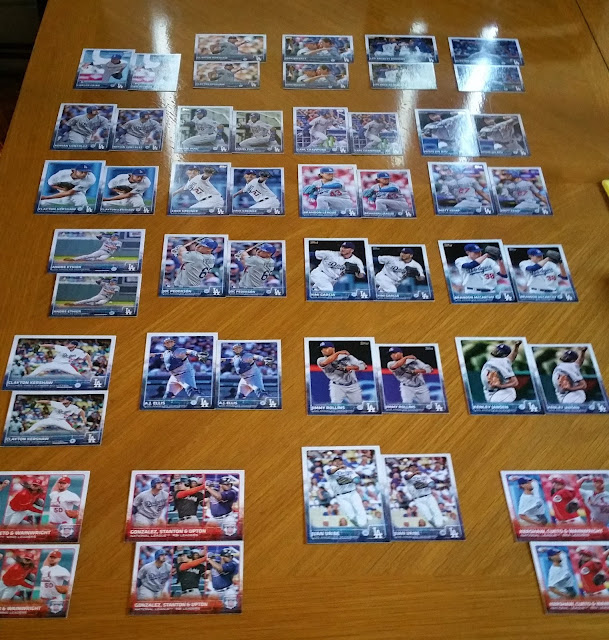 That is the complete 2015 Dodgers mini set, paired up against its flagship card to get the full mini effect.

This is the first time since Topps began its mini-exclusive plague in 2012 that I have acquired every card in the team set. Both 2012 and 2013 are close to completion but a couple cards away. 2014 is way off.

R.C. also sent a parallel to the parallels. 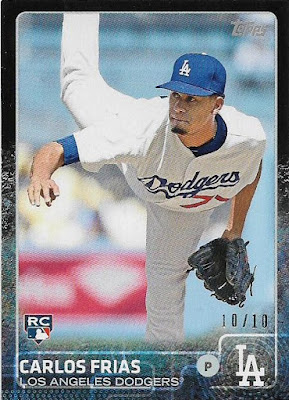 Receiving all of these is great. I have the mini pages ready to go (still some leftover from the free box from UltraPro) and I'll happily deposit them. They're good for what they are.

But they're really not the point of this post. 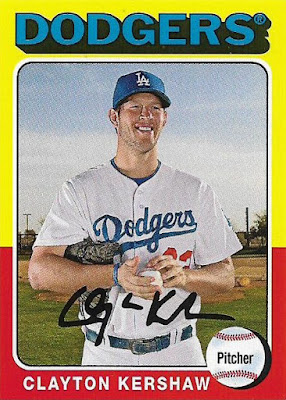 This is one of the 10 '75 mini exclusives from the 2015 mini set. It's the only one I want. I don't care about Bryant or Harper or never-to-have-another-season-like-that-again Arrieta. I wanted the real deal, Kershaw.

This gives me an excellent excuse to obsessively contrast and compare this latest 1975 mini tribute to the actual '75 minis, as well as at least another card.

But let's look at this card first.

Kershaw is featured with a the yellow-red border that was prominent in '75 Topps. There is one glaring difference about this card though, and I'm not talking about the ridiculous team trademark. But I'll get to that in a minute.

Overall it's a faithful tribute. The front shines, while the back ... well, let's see the back. 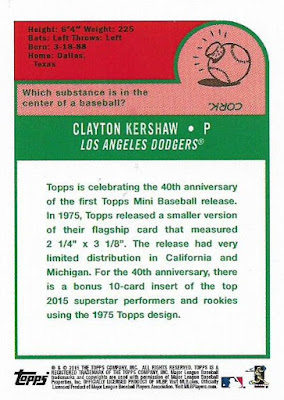 The first thing I notice is no stats, just a write-up. Credit goes to using the proper look and colors and formatting, although in the actual '75 set, the green bar that lists the player's name did not list the team. It also listed the full name of the player, which this does not.

The write-up on the back also frustratingly repeats a fact that has been handed down in the hobby for years -- that the original '75 minis had a limited release and were restricted to California and Michigan -- which is actually not completely true. I did not live in California or Michigan as a kid, yet, shockingly, I was buying 1975 minis at the corner store in Upstate New York in 1975. I believe there's enough room on the back of that card to squeeze "Upstate New York" in there.

I appreciate the cartoon on the back, even if it's repeated from the back of Sal Bando's card in the '75 set. 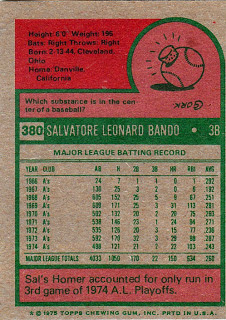 Perhaps what I appreciate the most about the back is the card stock.

No, it's not old-fashioned cardboard, but it somewhat sturdier than what cards are printed on these days. While the front offers the usual glossy coating, the back features almost a matte finish.

That makes the card appear a little less flimsy than this card: 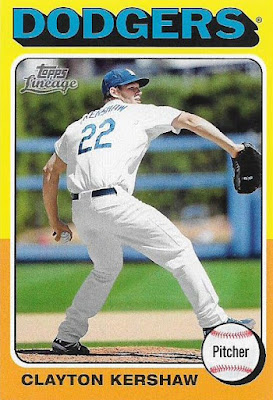 That is the last time Kershaw was shown on a 1975 tribute set. This is from the 2011 Lineage set.

There are a few things different about this card than the original '75 minis, even more differences than the 2015 version. For starters, there was no yellow-on-the-top, orange-on-the-bottom border combination in the '75 set (there was orange on the top and yellow on the bottom).

Willie Crawford is the original '75 mini (the only Dodger in the set with the yellow-red-non-All-Star border combo).

You can probably notice the glaring difference in the 2015 mini now. The letters on the name are white. The name letters for the original yellow-red cards were black (the yellow-red All-Star card name letters were yellow). As someone who has looked at this set more than any other, that difference is jarring. But whatever.

The differences in the Lineage cards include the lack of a facsimile autograph and the added Lineage trademark (as well as the team trademark). Also, the side borders for the Lineage '75 minis are skinnier than in the actual set.

The reason they are skinner is:

The Lineage card is thinner than both the original '75 mini and the 2015 mini.

In fact, another plus for the 2015 mini is that it is pretty much identical in size -- both height and width -- to the original '75 mini. The Crawford mini is slightly taller, but that could be related to the fact that cards weren't as uniform from card to card as they are today.

Both the Lineage mini and 2015 mini feature team letters that are quite a bit bolder than on the original mini.

But bolder team letters or no, white letters or no, glossy finish or no, I'm pretty happy with this card. It's nice to have something new that connects me 40 years back to that first year I collected cards.

After all, I completed the original '75 mini set at the end of last year.

There's no topping that as far as tributes.

acrackedbat said…
I'm happy RC sent these to you. I was actually going to send the set to you after Christmas. See, Santa brought me two sets; one to keep and one to share around. He told me I couldn't open it til the 25th though. Thanks for the wonderful assortment of cards which arrived a couple of days ago! I'll share them soon N.O.! Have a wonderful Christmas!
December 12, 2015 at 2:54 PM