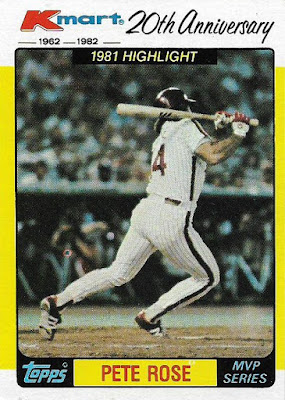 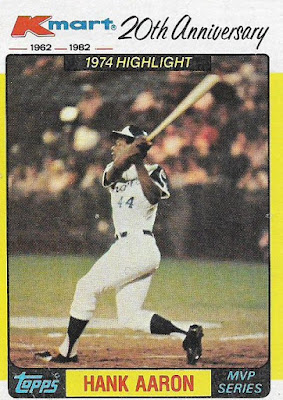 The 1982 Topps Kmart set soared through my collecting world like a comet. A, bright, shining boxed set that you could purchase only at Kmart. For the first time in my life, I had a reason to go to Kmart that didn't involve record albums.

I remember the boxes being stacked up at the individual checkout counters. They were right next to the register, and if I remember correctly, you would have to ask the checkout person for a box, and they'd put it on the counter for you.

The boxes sold for $2 or $3, I believe. But even that seemed like a large sum of money. I recall appealing to my brother, who worked at Kmart, to grab us a couple boxes. Come on, an entirely new set from a store just a couple miles away? This opportunity didn't come along every day.

We were used to getting our cards from packs, wax, rack or cello. We knew how to fish through a box to get a card or cut a card off a box. But a box all to itself of just cards? This -- this was new.

An entire set in a box. We needed to own this.

I'm probably repeating facts that everyone knows, but the 1982 Kmart set was among the first of its kind. Topps had licensed its name to other companies so they could promote burgers or snack cakes. But this time, Topps was teaming up with Kmart to promote just cards, a self-contained card set.

The set featured the MVPs for the AL and NL for each year of Kmart's existence -- from 1962 through 1981. Each card was a reprint of the player's Topps card from the year they won the MVP, placed on Kmart's 20th anniversary design.

The set was issued in such large quantities in 1982 that it is virtually worthless in terms of cost now. You can get the entire boxed set for under a buck. While cards were soaring in value during the '80s and '90s, the Kmart set was decreasing in value. Now that's a feat.

I could see it at my own Kmart. Those sets that we longed for during the summer, were still stacked up in October. So many little red boxes. The comet extinguished.

Also, when I saw the cards, I wasn't impressed. Since the first set I ever collected was 1975 Topps, I was fully aware of the MVP subset from that year and this was Kmart doing the same thing -- only adding the MVPs from 1975 through 1981. Hell, even the fake 1962 Maury Wills card was the same.

There is only one thing that redeems that tired old set in my eyes, and I was reminded of it when I received the above Pete Rose card from Max of Starting Nine.

The last three cards in the set do not resemble the others. They are really the only unique cards in the set (the Fred Lynn card is strangely different, but not unique). They celebrate three individual feats -- Don Drysdale's consecutive scoreless pitching streak, Hank Aaron's career home run mark, and Pete Rose's NL career hit mark.

The last two cards -- Aaron and Rose -- are night cards. The only night cards in the set.

I don't know what happened to the Kmart boxed set that I eventually landed back in the early '80s. All I have left are the three highlight cards and the Dodgers from the set. I don't have any desire to reacquire it, but I'm happy the non-Dodger night cards in the set now have a home.

The '82 Kmart set deserves credit for spawning the avalanche of boxed sets paired up with other companies that appeared through the rest of the decade and into the '90s. Kmart even issued another boxed set of current players in 1990.

But '82 was when it was amazing and new. Until it wasn't.

Matthew Glidden said…
Kaybee Toys went down a similar path and I was SO EXCITED to get that little playing card sized box at about age 13. I think the Kaybee Kings set includes a night card for Nolan Ryan, should you end up with one. There's a scan mixed into this 30 Years of Cardboard post:

Steve at 1975BaseballCards.com said…
My favorite thing about this set is the Fred Lynn MVP card. I think it's either from the same photo shoot or might even be a full shot of his cropped 1975 rookie card. If you look closely at his rookie card, it actually looks weird like Topps made some kind of weird edit. I wrote about Kmart set and included both the MVP card and his rookie card for comparison: http://1975baseballcards.com/1982-kmart-baseball-cards/
December 30, 2015 at 1:14 AM