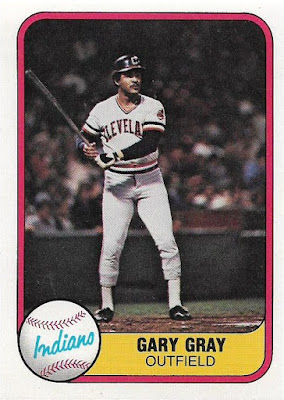 Figure out which major leaguer in history has a name that most resembles yours. (Those of you who share a name with a big leaguer are disqualified. Go gloat somewhere else).

Gary Gray is my player.

Neither his first name nor his last name is the same as my first or last name. But this is how close his name is to mine:

In my lifetime, I have been mistakenly called "Gary" more than any other incorrect name ever. It's freakish how many people confuse "Greg" with "Gary." Also, there is no other wrong last name that has shown up more often on envelopes sent to my home than "Gray."

So, in some ways, I might as well be "Gary Gray," because apparently there are a significant number of people I have come across over 40-plus years who think that's my name.

The actual Gary Gray didn't have much of an impact in the majors or in the card world. He has just three Topps cards, three Fleer cards and a Donruss card. He has a few minor league cards, including this awesome dusk card.

His big league career lasted from 1977-82, with his best season being his last, with the Mariners. But he stayed in pro ball all the way through 1987.

He'll always have some significance for me, because there may be nobody in major league history who has my name, but there is one who is pretty damn close.

Comatoad said…
You can call me Ray, or you can call me Jay....Seriously, the closest I came was Duff Brumley, a former Cardinals player I blogged about awhile ago. After appearing in two ball games, he was quickly forgotten.

Unknown said…
What about me? Two different players in two different sports with the same name?
December 28, 2015 at 10:53 PM

defgav said…
My guy is Gavin Baugh, sharing the same first name and the first couple letters of the last name (plus another same letter in the middle). He never made the majors, but got a shared prospects card in 1993 Topps.
December 29, 2015 at 3:18 PM

Adam Kaningher said…
Mine might be Dave Kingman. Perhaps not that close, but with a bit of translation the last name comes out about the same.
December 29, 2015 at 11:19 PM

Steve at 1975BaseballCards.com said…
That is weird how the brain works. Grey or Grue are closer to Greg purely from a letter angle. Anyway, thanks for the interesting post Gary :-)
December 31, 2015 at 2:15 AM