There's no need to fear, Donruss and Fleer are here 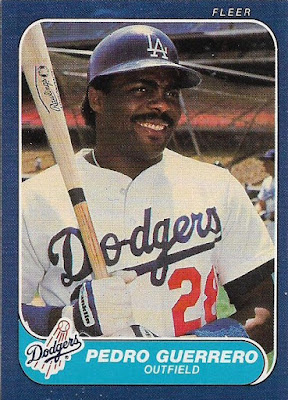 I received a rather random package in the mail a few days ago from Nick M., who has sent me cards several times (Nick, my mind is slipping and I can't recall what you collect these days, ship me an email when you can).

He said that I mentioned the desire for some mid-1980s Donruss and Fleer.

This is the trouble with running three blogs. I don't remember what I said half the time. Did I really say I wanted mid-80s Donruss and Fleer?

Yeah, I guess that sounds like something I would have said. The mid-1980s was the only period during that decade where I completely shunned pack purchasing. I have never opened a pack of Fleer from 1985, 1986 or 1987, and I can say the same thing about 1986 and 1987 Donruss. Every other brand and year from that decade, I'm good. I know what's in it.

So Nick sent me some '86 Fleer, both the flagship and traded variety, which I'm looking forward to reviewing. And he also sent some '86 Donruss, which we'll look at together once we get our courage up. 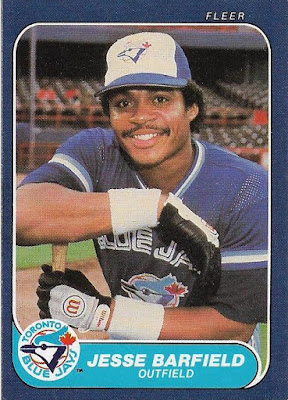 I've mentioned before that I have a mental block when it comes to 1986 Fleer. Having never purchased packs of Fleer in 1985 and 1986, I didn't form a connection to the cards, and I constantly confused the two. Most of the time I figured '86 Fleer was '85 Fleer. It was almost as if Fleer didn't even put out a set in 1986. 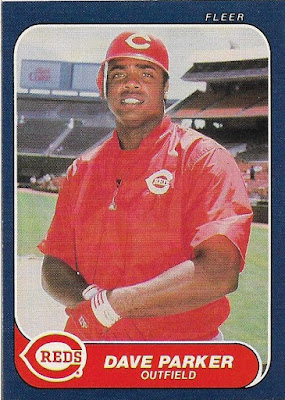 This is the reason for my interest in a handful of '86 Fleer -- to form a connection. I can look at these cards at my leisure and discover the things that I would have discovered in 1986 if I didn't spend the entire year in a classroom or a bar. For example, here Dave Parker wants you to buy a refreshing glass of Diet Coke. 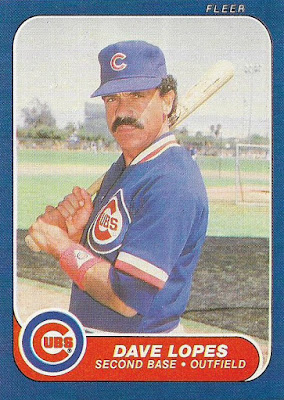 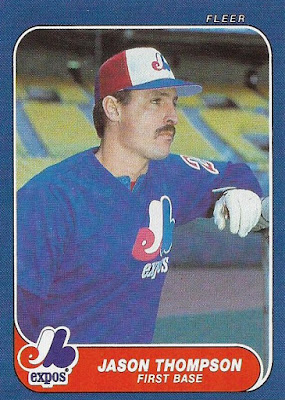 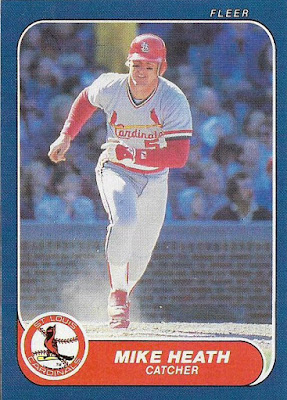 One of the joys of receiving cards from unfamiliar sets of the past is spotting players with unfamiliar teams. Here we have Davey Lopes in one of his few cards as a Cub; Jason Thompson in what I believe is his only card as an Expo; and Mike Heath during his very brief time as a Cardinal. 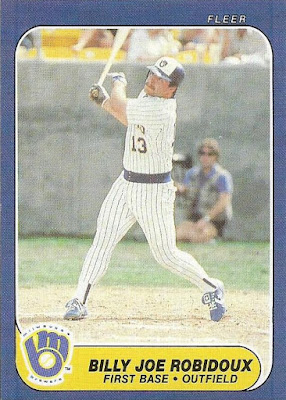 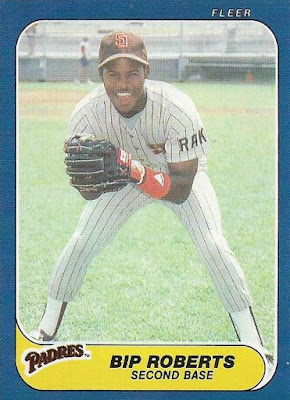 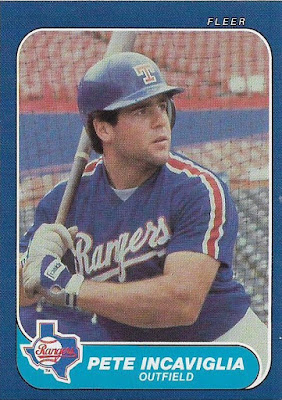 If you want rookies, well, I'm told 1986 Fleer Update is the place for rookies. Some guy named Bonds and some guy named Canseco. I don't have either of those for you, but I do now have rookie cards of the once legendary Billy Joe Robidoux, the always legendary Bip Roberts, and the future mullet man Pete Incavaiglia.

Incaviglia's card also demonstrates the most extraordinary waste of a card back that I may have ever seen. 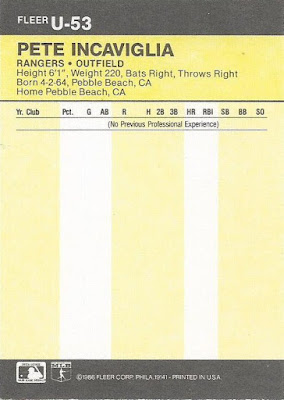 Make sure you take your full hour for lunch after putting that one together, boys. 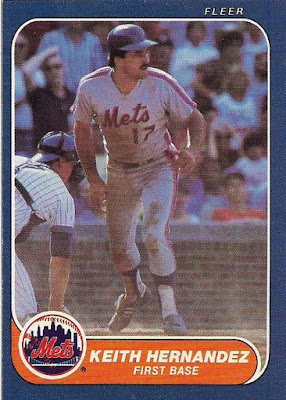 Fleer, as always, depicts what Topps never did. Here is Keith Hernandez in action. You're not really sure what happened although it can't be good for the Cubs with the way the catcher is crouching and Hernandez is bolting. But what clinches that it is another typical Cubsian flub is the despondent fan in the background, standing up in disgust with an "Oh no, not this again" hand to the head. 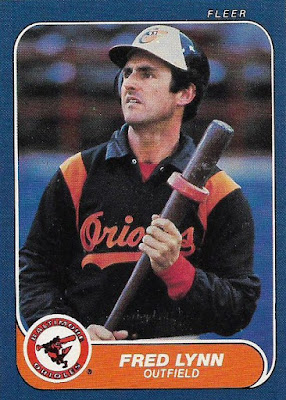 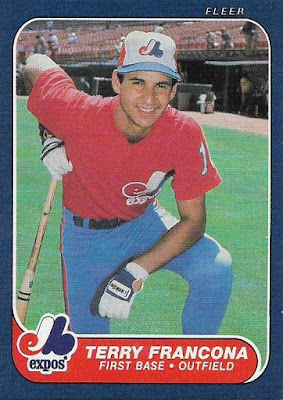 Many 1980s Fleer photos are just a bit off. Francona is leaning on his bat in a typical pose, but his arm is so awkwardly bent it looks like he's going to break it clean off. Meanwhile, Lynn appears to be about to audition for a musical performance called "My Bat And I". Fleer is filled with so many cutting-room floor photos. 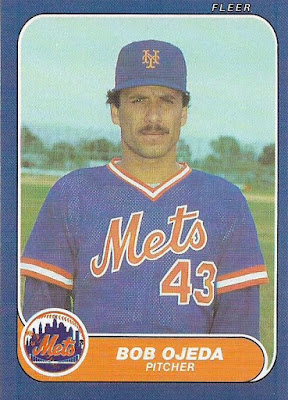 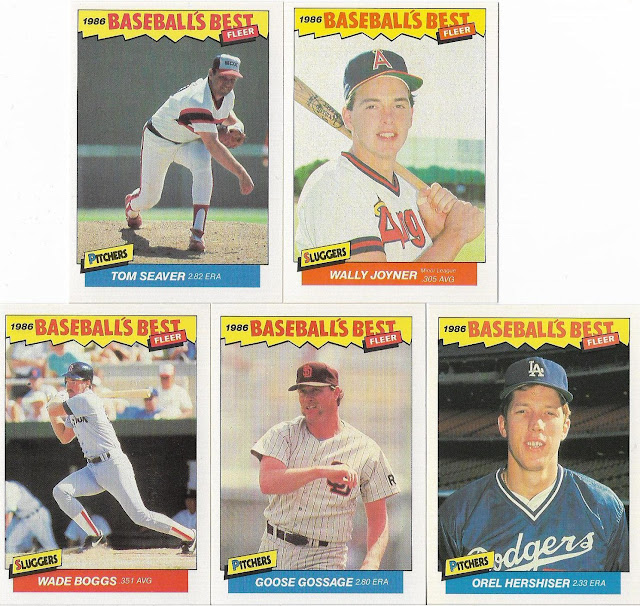 Nick also sent a few cards from Fleer's Baseball's Best set from that year. If you ask me, these are better executed than Fleer's primary set that year. Better look. The cardboard seems sturdier, too, even if it's not.

But overall, '86 Fleer has it going on because now I'm going to show you what Nick sent me from Donruss from that year. How many times have I mentioned on this blog how awful '86 Donruss is? Twenty? Thirty? Fifty?

I'll never get over the sheer torture of those tightly packed horizontal black lines. I seriously weep for kids who had to collect this set. Thank goodness there were options. The smart kids chose Topps or Fleer. The kids who chose '86 Donruss were cursed with sporadic seizures. 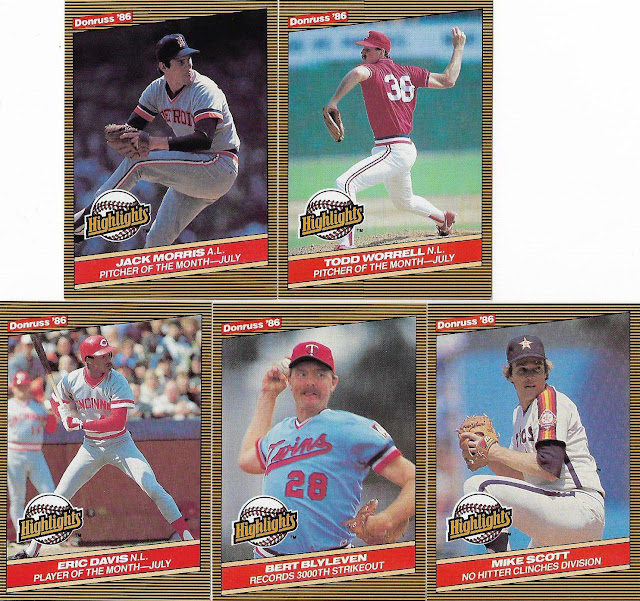 Donruss came out with a few different spin-off sets in 1986, stubbornly sticking to that same alarming design but changing the background color to a puke gold, which is appropriate considering the room-spinning pattern they chose. 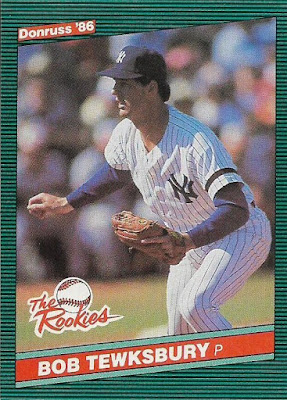 Not doing much better with the green background either.

I think it's safe to say my curiosity over 1986 Donruss is done forever.

The same goes for 1986 Fleer. I'm happy to have a healthy sampling from what is a very average set. Hopefully I won't forget about it anymore.

Thanks for a little look at what it was like to open packs of this stuff in 1986, Nick. Something tells me I didn't miss a whole lot.

Mike Matson said…
Love the Jays and Expos..
Incaviglia also is an answer to a trivia question.. He's the reason a player must be with the team that drafted him before being eligible to be traded. He was drafted by the Expos and didn't want to play there
December 1, 2015 at 7:55 PM

Tony L. said…
I always found strange humor in the fact that Billy Jo Robidoux was not a Cajun, but rather was from Massachusetts. Also, that Fleer card is an uncorrected error -- Robidoux did not spell his name with any e's in it.
December 1, 2015 at 8:24 PM

madding said…
I started buying packs in 1986 as a 10 year old. Topps was 35 cents a pack (MSRP), Fleer was also 35 cents but quickly sold out, and Donruss was 60 cents. So, yeah, Donruss was the premium stuff at the time. Earlier Donruss packs were available but even more expensive.
December 2, 2015 at 4:50 AM

Big Tone said…
That shot of Hernandez looks like It might have been snapped after a home plate collision.
December 2, 2015 at 1:56 PM

Billy Kingsley said…
I like the Fleer design. The back shown looks bad, but I understand the reason it exists, they wanted to have a uniform look across all the cards.

The Donruss set is not one I can really bring myself to say I like. (and that's rare because I like most sets) The colors don't bother me too much, but that semi-horizontal design is just a killer.
December 2, 2015 at 3:37 PM

Mark Hoyle said…
Played against Billy Joe in High school. State finals 1980. Was a pretty imposing player even in high school
December 3, 2015 at 10:04 AM