Supplier of cards ... and babes 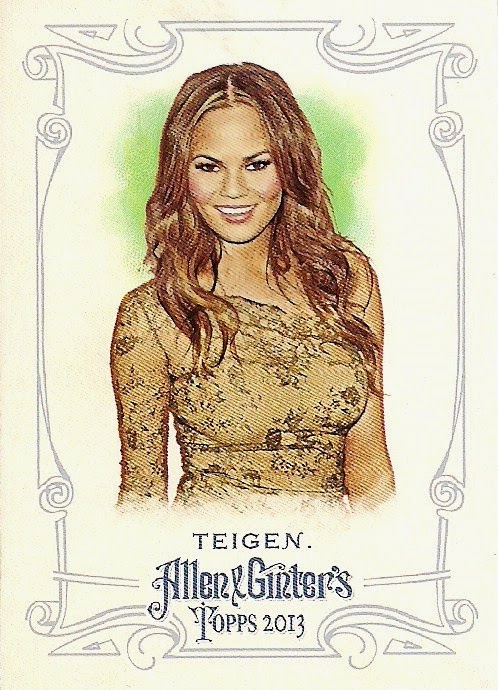 All right, I didn't get much response from yesterday's post, so I'm not going to believe anybody ever again when they cry about how kids don't collect anymore. I showed you that they did and obviously it's not that interesting to you.

Granted, you might need to have kids and have been collecting for quite awhile to appreciate what the big deal was. So I thought I'd write about something else -- to which almost every male can relate:

Yeah, you're interested now, huh? All I have to do is flash a picture of a pretty girl.

Max from Starting Nine sent me another card package recently. He does a good job of finding stuff that I like and need. I've written plenty about that and you'll see those cards in a minute.

But he also does a pretty good job of finding a pretty woman for me now and then. Yes, I'm happily married, and, no, he's not sending me actual women, no need to panic. But this doesn't mean that I don't like girls on cards. Honestly, why are we collecting dudes on cards anyway?

Max will throw some Benchwarmer chick in a Dodgers cap my way periodically or call my attention to something that is curvacious and Dodger-like. He did that the other day when last year's Allen and Ginter Babe Of The Year, Chrissy Teigen, threw out the first ball at the Dodger game on Tuesday. 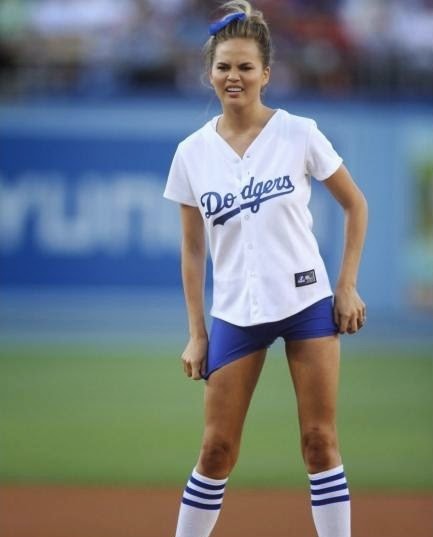 THAT is the photo that should have appeared on A&G.

You'll be happy to know that Teigen's first pitch was a lot less embarrassing than you might expect throwing in those tighty-tight shorts.

In fact, here is a chart: 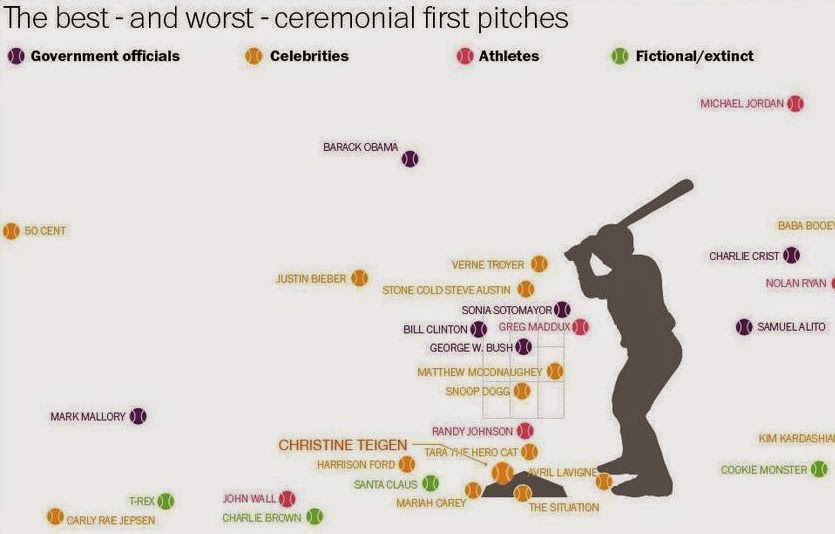 I don't know who some of those people are, but I do know that Teigen was at least over the plate if somewhat appropriately bouncy.

I'm happy to have Teigen relieve Alyssa Milano on the sidebar for awhile. Alyssa is worthy of staying there for the length of this blog -- no matter how kooky her tweets are -- but I think I needed the update.

OK, now for the baseball card portion of the post. Here are some cards from Max: 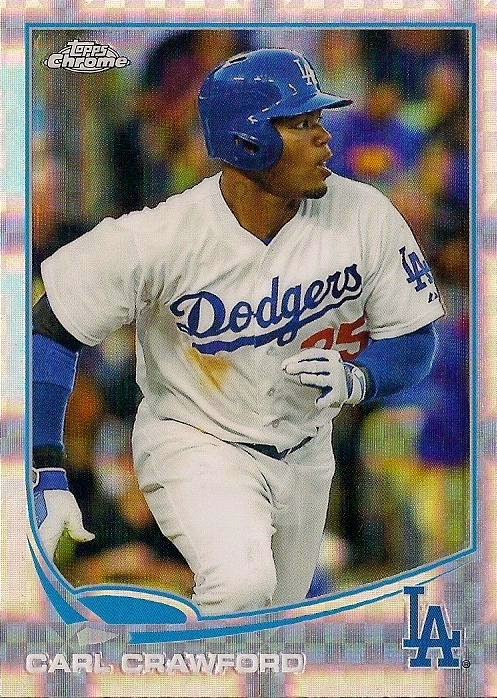 These were all obtained from some dime box scrounging at a card show, Max said. He's found something that I'm convinced I'll never see.

Carl Crawford, even in his formerly-known-as-an-X-fractor state, is very worthy of a dime box these days. Might need to downgrade him to the nickel box. 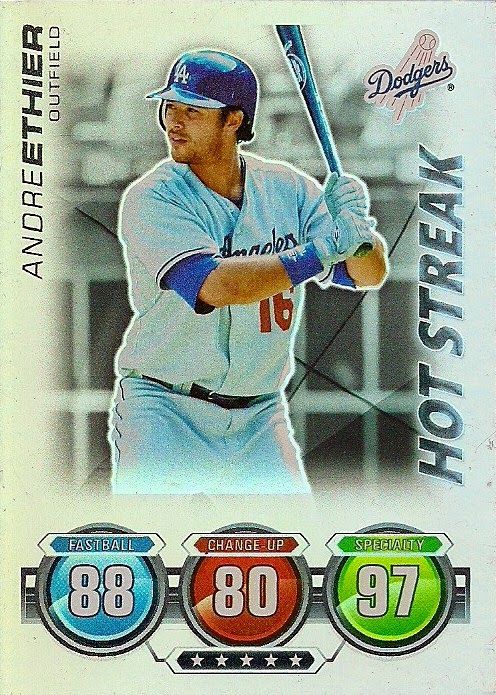 Andre Ethier? Hot Streak? (*begins uncontrollable laughter. 20 minutes pass. Wipes away tears. Still can't stop giggling. Gets a glass of water. Drinks it. Spits it up while looking at the scan again. Controls self. Returns to blog post*) 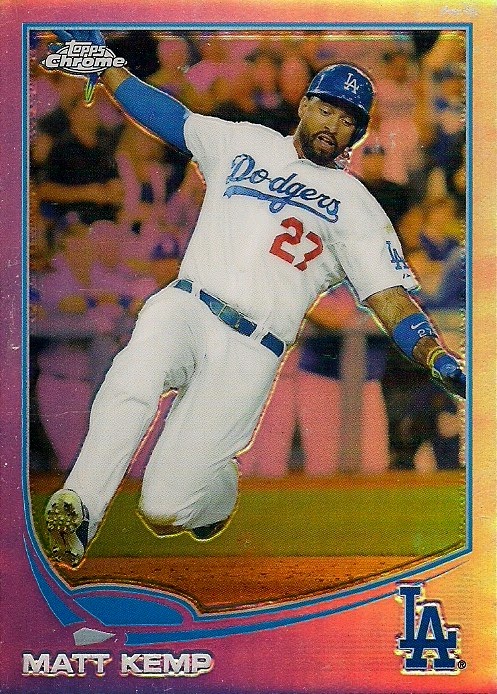 I would love for Matt Kemp, last week's NL Player of the Week, to continue the pace that he's on right through the regular season, postseason, World Series, the inevitable victory, and then during the champagne celebration, find Fox's Jon Morosi, who has had Kemp traded at least 25 times during the last two years, and pants the guy on national TV. 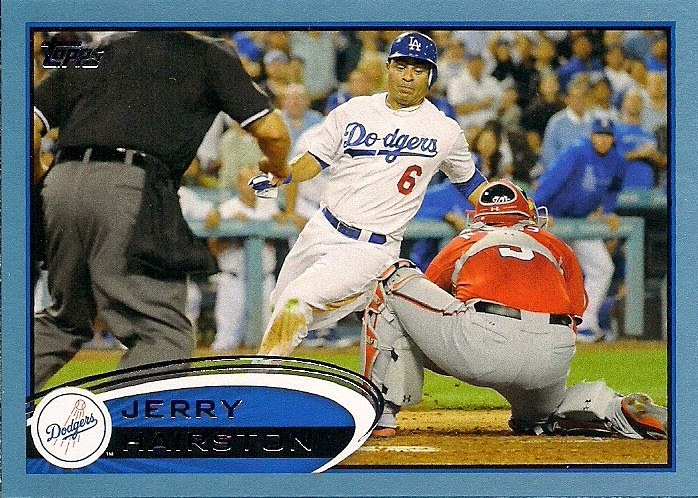 I've determined already that Jerry Hairston was safe on this play against the Nationals. But if this had occurred in 2014, he'd be safe already because Wilson Ramos is not leaving Hairston A RUNNING LANE! THIS IS CRUCIAL, STUPID CATCHER, YOU HAVE TO LEAVE A RUNNING LANE, SO WE CAN PROVIDE FANS WITH THE MOST AWKWARD PLAYS AT THE PLATE THAT I HAVE EVER SEEN IN 40 YEARS OF WATCHING BASEBALL! GET WITH THE PROGRAM! IT'S DAINTY BALL NOW! 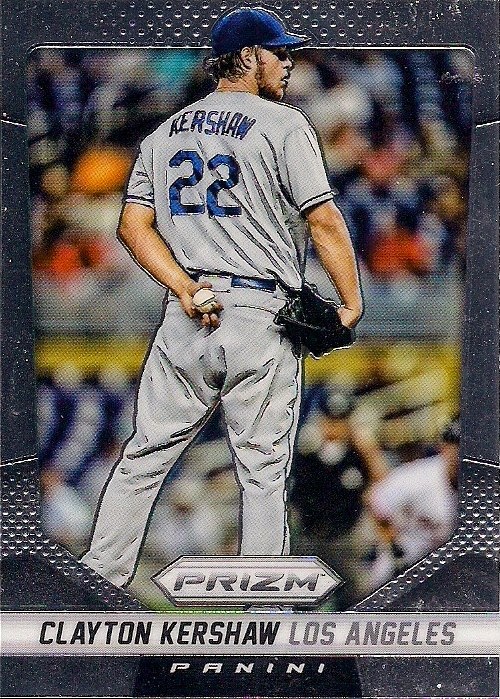 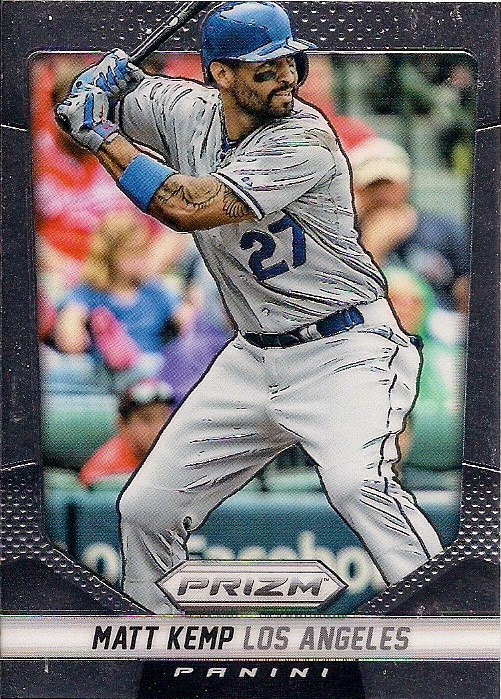 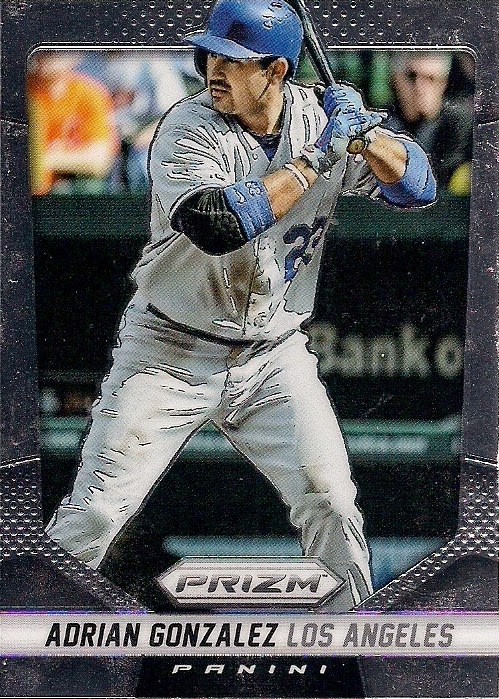 I don't know where everyone is finding this year's Panini Prizm product, but I'm still pleased that folks that aren't me are willing to pick up cards of players in their prison uniforms so they can send me the Los Angeleses.

All three of these guys were key players in the Dodgers taking 3 of 4 games from the Angels in the annual Freeway Series. I'm the last guy to be keeping track of interleague standings. I care less about whether the Angels lead the Dodgers or the Dodgers lead the Angels in this series than when the next iphone comes out. But I know a certain Angels fan who relentlessly brings up Angels positives and Dodgers negatives so all I'm going to say is: IN THE LAST FOUR GAMES BETWEEN THE DODGERS AND ANGELS, THE DODGERS LEAD 3-1, BITCH!

I have to say that because he never will.

But I hope that interested you more than heart-warming stories of kids collecting.

EDIT: Here is an additional photo of Teigen for people with odd hang-ups about pulled back hair and scrunched up faces: 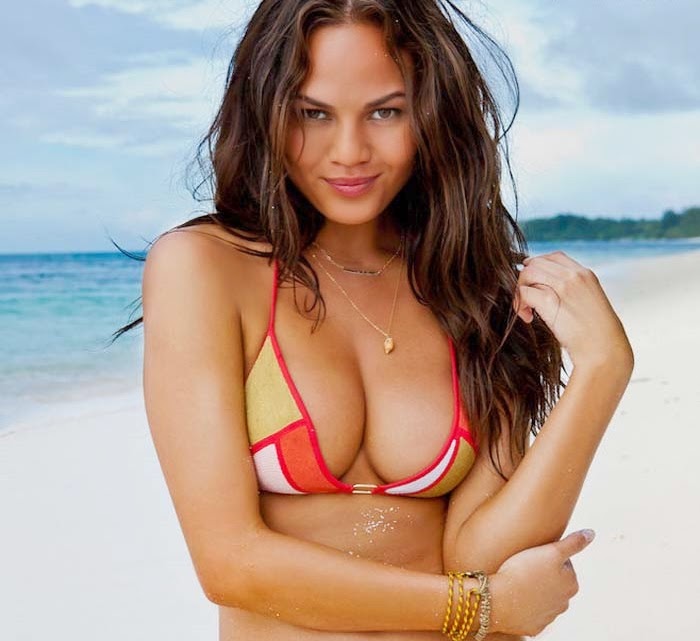 If people have a problem with this one, professional help may be required.

Jim from Downingtown said…
1. I don't read SI, so I have no idea who she is.
2. The A&G photo is hardly a flattering shot (tight dress - yes, otherwise - no)
3. The Dodgers photo is sporty yes, but hardly babelicious with the pulled-back hair and scrunched-up face.
4. I'm sure she's sexy-looking, but just not in these 2 pix.

Commishbob said…
Like Jim, I had no idea who she was until the video showed up pretty much everyplace.

Jupiterhill said…
Now I'm disappointed because I never knew Aylssa Milano was on your sidebar. I should scroll down more. I also didn't know Ron Cey was on the sidebar, but then again, I don't need to see him everyday.
August 9, 2014 at 12:17 AM

SpastikMooss said…
I also miss Alyssa, mostly due to the pulled-back hair and scrunched-up face.

Jeff said…
I like pulled back hair. Scrunchy face doesn't bother me.

jacobmrley said…
I see my career as baseball babe pimp is both loved and hated in equal amounts. Glad to be of service either way.
August 21, 2014 at 3:56 PM