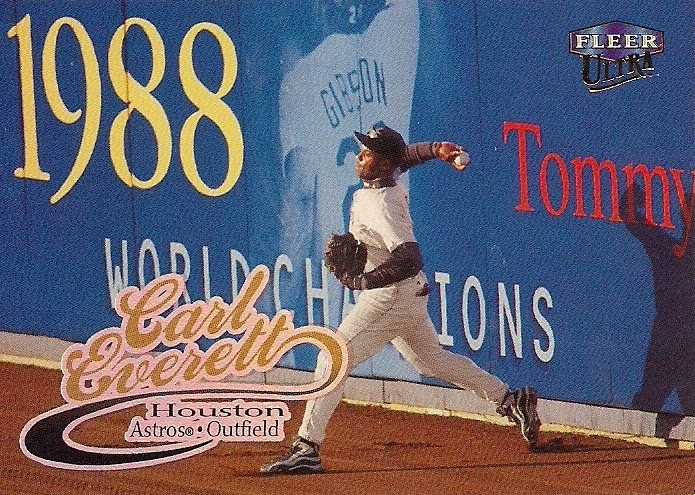 Brian from Play at the Plate pulled a fast one when he sent all those Dodgers cards from the turn of the century.

One of the cards is the one you see here. It's actually not a Dodger card at all. It's an Astros card.

But even a Rangers fan can recognize Gibby trotting to first with his fist upraised in the background. And the 1988 World Champions (or Chaions) were the Dodgers. And "Tommy" has got to refer to Lasorda, right? Looking at the card, it seems more Dodgers than Astros.

So what do I do with this thing?

Cards that go in my Dodgers binders are reserved for people who play for the Dodgers, or are listed as playing with the Dodgers. Carl Everett never did.

If I was gcrl, I'd have a separate binder set up for "Dodger Stadium in the background" cards. But I don't have one of those, nor do I want to start a new collection.

Yet, throwing this in a box seems harsh, given all the Dodgerness on the card.

I could pay tribute to Everett and his denial of commonly known facts, like dinosaurs and the moon landing, and put this card in my Dodger binder and simply pretend it's not there. But I probably won't do that.

Perhaps I'll just set it aside and then when other cards fall into my collection that are similar, maybe I can build a page with them -- although I don't like the idea of even more cards just sitting around.

So, basically, this card just leaves me confused.

Thanks a lot, Brian.

I was just getting a handle on this collecting thing.

steelehere said…
I'm with you on the anti-Chris Perez bandwagon. I'd throw Brandon League and Brian Wilson on there as well. Fortunately, Paco Rodriguez is up for good since Paul Malholm is out for the year.
August 4, 2014 at 12:23 AM