That is so old 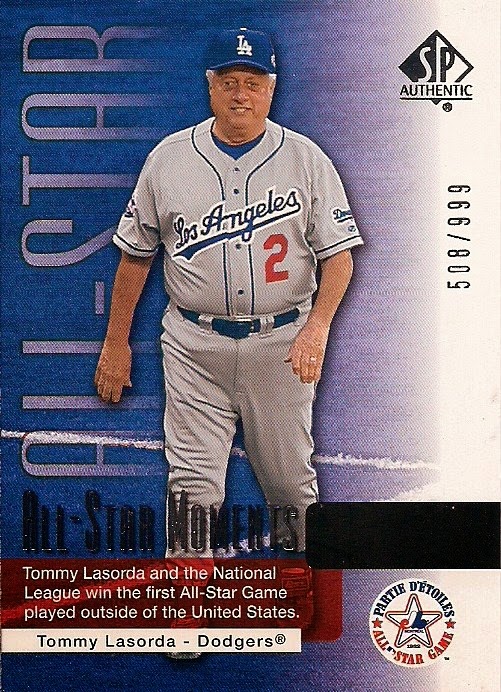 There's been a lot of talk about age in the sports world lately. With the deaths of Bob Welch, Tony Gwynn and Chuck Noll, you've heard the following in casual conversations:

In case you haven't noticed, this is a youth-driven culture. Nobody reads anything, looks at anything, mentions anything unless it involves someone young:

Everyone: Was she hot?

This is the world in which we live. It is particularly apparent online. Check out virtually any news site that is not connected to a "reputable newspaper" (and even a number of them have come over to the dark side).

"Children as young as nine determined to get tans to imitate bronzed celebrities."

OK, maybe we're just obsessed with celebrities, people we can make fun of, and sex. But you have to admit, there's a lot of young folks mentioned in the above three links (and no, they're not really links, go find that crap yourself. It won't be difficult). And that's not even including all the various click-bait stories that pop up on the leading websites.

Youth, now more than ever, controls the world. It sells everything. And as an ever-aging parent who has a child of a certain persuasion that requires me to be around teenagers quite a bit, I am fully aware of how noticed they are and how ignored I am.

This is why I like baseball cards (yay! I finally got around to them again).

Sure, the new, "young" baseball cards get all the news. Topps Series 2, blah, blah, blah. That's just the way of our culture, again. And there are a number of collectors who collect only the latest and greatest. I would imagine the corporations like those collectors best. Youth and those who like "new" are the only demographic.

But baseball card collecting does not recognize demographics.

Some of the most expensive, most valued and most desired cards are as ancient as great grandmother's rocker. Probably even older.

In fact, one of the greatest compliments you can give a card or a collector is to look at that card and exclaim "That is so OLD!" Yep, the putdown of teenagers through the ages, dismissively deriding something because of its advanced age, is a point of pride in this hobby.

That probably won't shut up the "hobby is dying" Chicken Littles  but, for me, I think it's pretty cool. Old age is valued. Staying power is valued. History and community and tradition is valued.

And with that, I now present the latest and greatest ... oldest card in my collection

These three cards are all equal in ancientness: 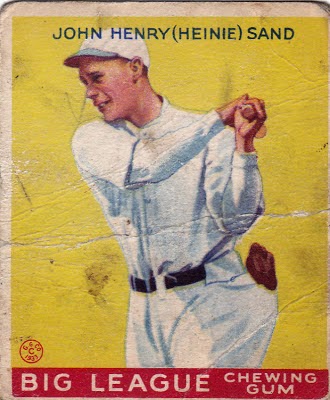 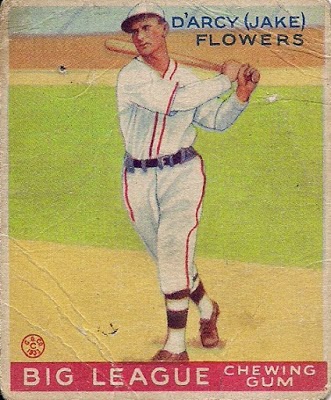 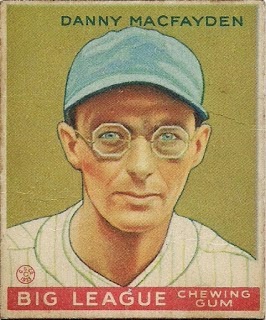 Then Zippy Zappy entered the picture and dropped this card on me: 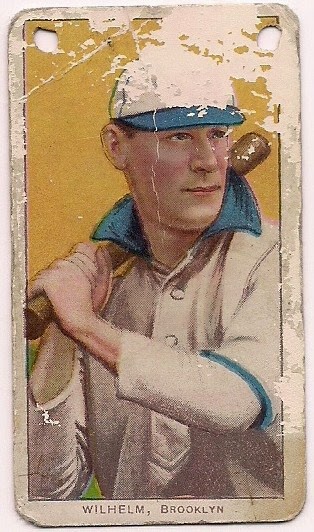 That is a 1909 T206 card of Brooklyn Superbas' pitcher Kaiser Wilhelm. That's right, the same set that brought you the Honus Wagner card that people won't stop talking about (you would think Wagner was a 14-year-old girl who robbed a bank).

Even more fantastic is Wilhelm was a pitcher and he's got a bat on his shoulder because THAT'S WHAT PITCHERS DID IN 1909!

As for the condition, I don't mind it at all. In fact I am intrigued by the two punch holes at the top. Did people wear baseball cards around their neck like a locket in 1909?

I admit that I suffer a bit from the youth syndrome that I mentioned  above. I've never paid much attention to the T206 set or any tobacco-era sets. For most of my collecting life, the 1950s was as far into the past as I would go, because while I have always appreciated vintage, those tobacco cards were always ... so OLD.

I've come around on that, although getting more T206's isn't No. 1 on my card priority list. I think with advancing age and a growing dislike for how the media and the general public underlines and emphasizes anything just because it involves youth, I'm gravitating more and more to items that can last. Items with a lot more staying power than a super short print from 2012 Topps.

That probably means I'm SO OLD.

Lasting longer than the latest Lindsay Lohan story is a true accomplishment these days.

Commishbob said…
Those cards are just so cool. I'm jealous, I don't have a single '33 Goudy (or WWG) in my collection.

Jim from Downingtown said…
Those Goudey cards are cool. I'm jealous - my oldest card (not counting the Topps 1952-54 Reprints) is a 1955 card of Phillies' manager Mayo Smith.

Jim from Downingtown said…
Oh, and I just got a 1955 Red Man card a few weeks ago.

Hackenbush said…
I think one of the reasons I'm not excited about the current cards is that I just can't seem to keep track of the players these days. I turned on the Cubs-Marlins game and found I'd never heard of half of their lineup. I don't know what it is about aging, which I seem to be doing rapidly. My taste in books has run more to history and biography as well. BTW the new Ted Williams book, "The Kid", (not the one by his daughter) is very good if you don't mind the length (765 pages).
June 17, 2014 at 10:16 PM

Robert said…
The only reason that I remember that the capital of Nevada is Carson City is my 8th grade geography teacher's name was Miss Carson.

That's a wonderful T206 you are now the proud owner of!! Funny how the loss of paper and the two bullet holes probably add more character to the card. Maybe one day, many years from now I will attempt to purchase a card from that set. Maybe...

Play at the Plate said…
I absolutely cannot stand society's obsession with celebrities and EVERY SINGLE thing about them. It sickens me. At my job we have 4 televisions that are tuned to news stations. Even the "main stream" media has to throw in little celebrity stories to keep the masses tuned in. While I wouldn't actively wish harm on another person (well, most persons) if I never had to see or hear another thing about ANY Kardashian I would be just fine.