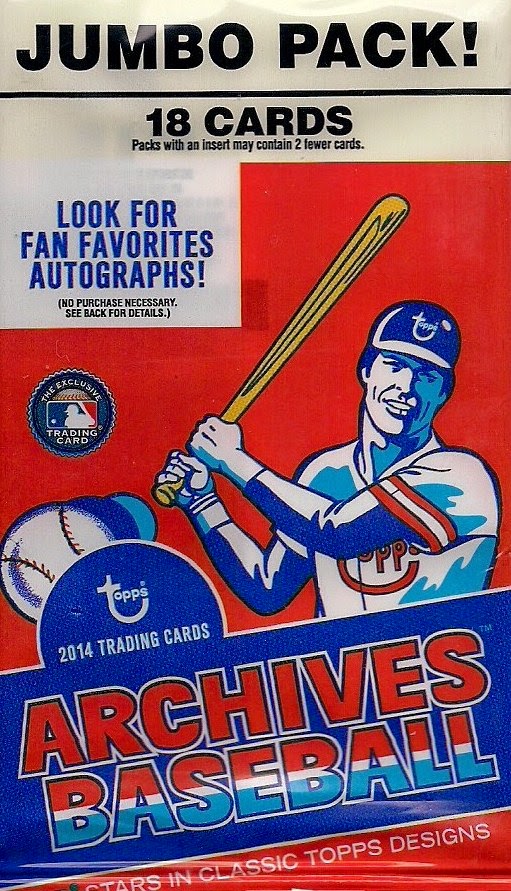 Here's the thing. I really want to like Archives. I really, really do. But it's pretty obvious that Archives can't be what I want it to be. What it should be. It's not going to happen. And I don't want a product that can't aspire to that.

But still there is this waaaaaaant. It's current and retired players on OLD designs! I love old designs! Current players? Meh. But old designs??? Can't get enough. This is why Fan Favorites worked so well a decade ago. Of course, back then they had the better cardboard. And no short-prints. And a wide variety of designs instead of just four. And autographed cards that one could actually pull (I know, I pulled two in 2004 out of common ordinary blasters).

And this year, Archives made it worse. By repeating one of the designs it just used two years ago. And by announcing that the 1989 design needed to make a comeback. And ... AND ... by keeping the shortprints -- but making them the same designs as the base set. Arrrrrgh!

It just keeps getting better and better.

It's very limited want, mind you. Even unrealistic expectations know when it's hopeless. It's a "quick pass by the card aisle" kind of want. In fact, if Target had any single packs of Archives (do they even make those?), I would've gladly taken one of those. But all that was available was a $5.99 rack pack of 18. So, for 33 cents per skinny notecard, I grabbed one.

Here is what was inside: 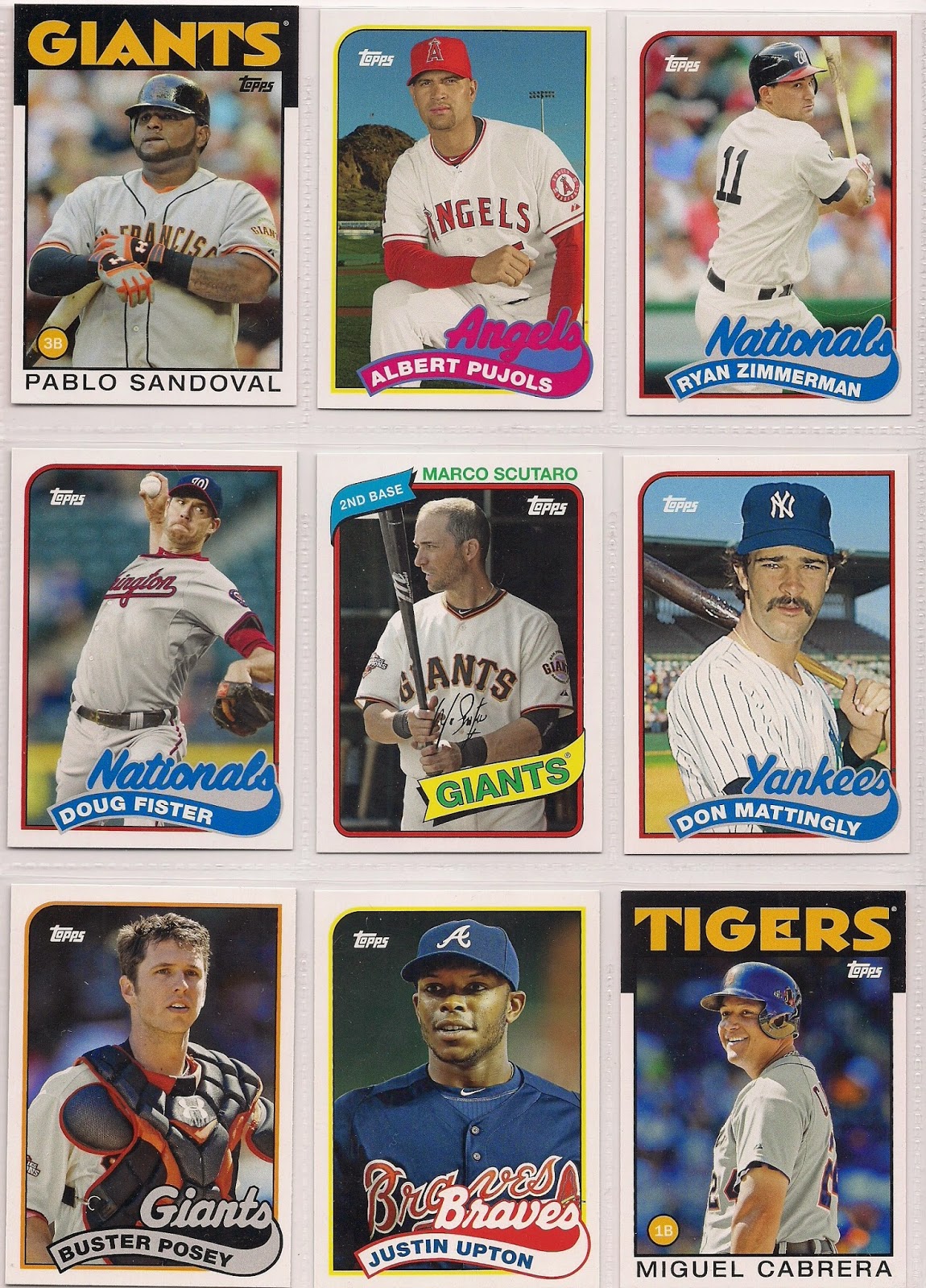 Archives isn't worth the individual-card treatment, so I'm showing you nine cards at once. This is the bottom panel. I opened the bottom first, because I thought it would be good luck. Obviously, that failed. There are three Giants there -- proof that I should never open a pack of modern stuff again. Also, that Mattingly looks very odd -- like Mattingly was cut out from some other image and placed on the photo.

Also, the page is a tribute to junk wax. Six cards honoring 1989. I almost fell into a coma shuffling through these. May I stop enjoying current cards before 2038 Heritage arrives. 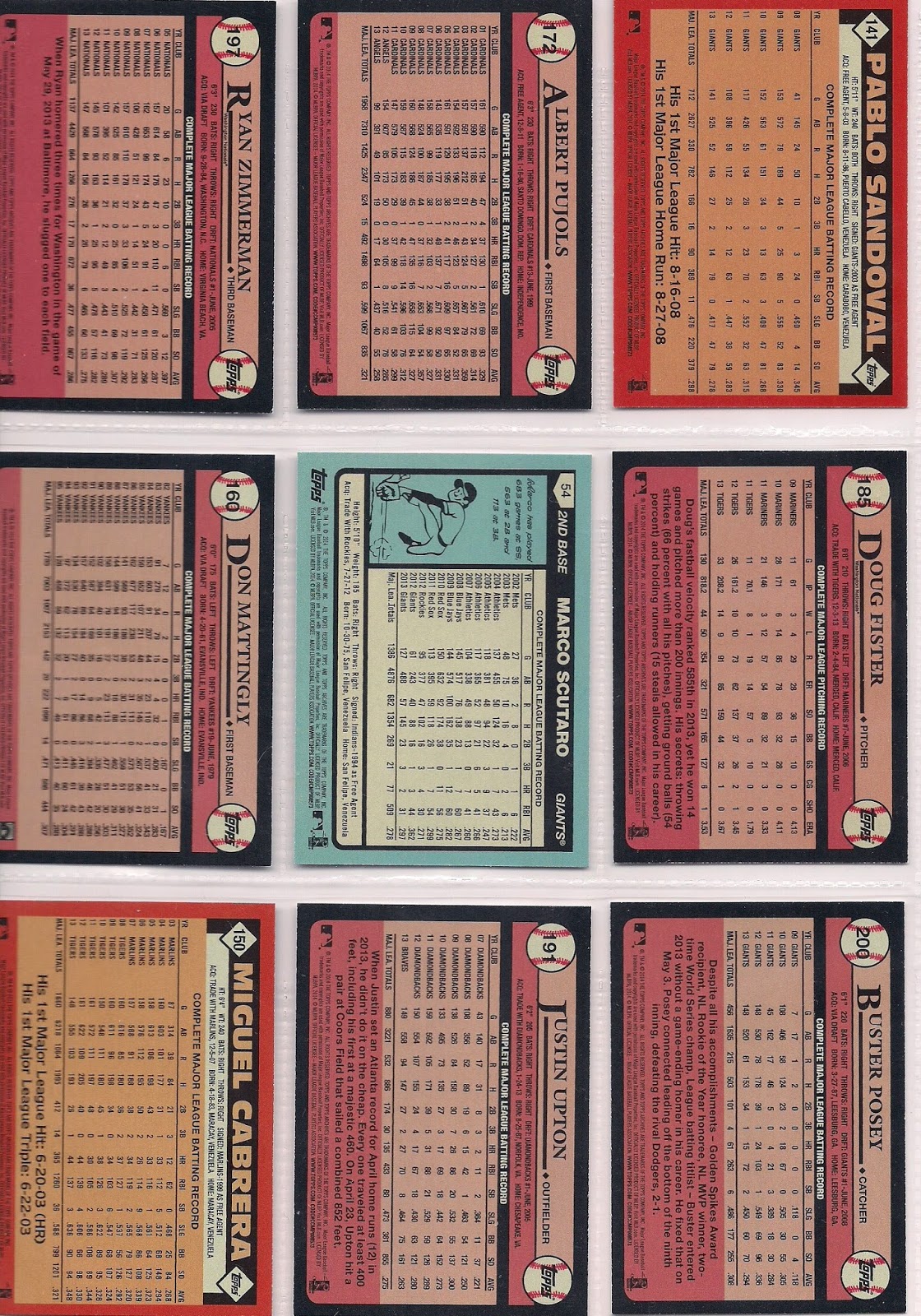 I can go up to my dupes box and view the same thing. Damn dull. I just can't get over this 1989 thing.

Let's move on to the top panel of cards: 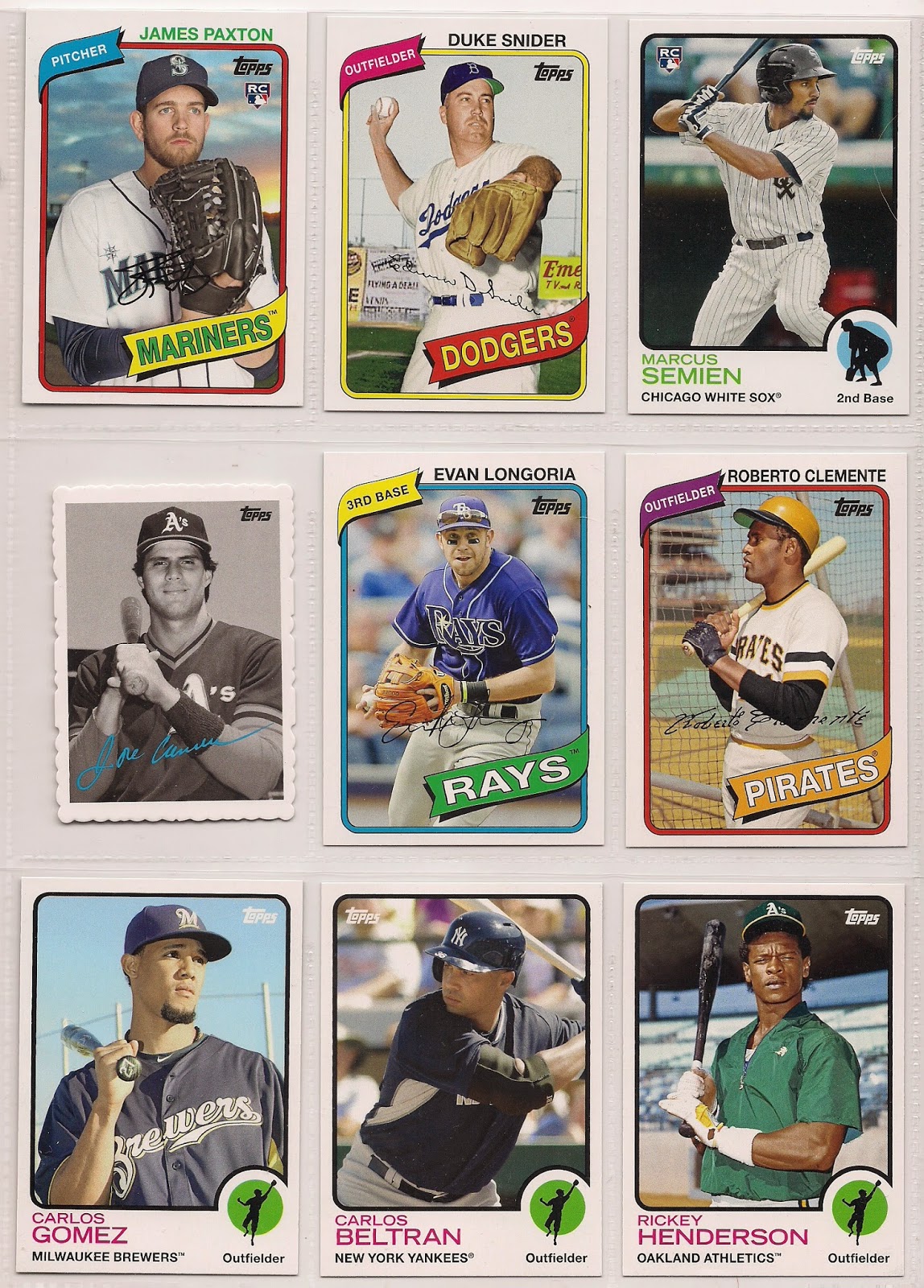 This is a little better.

First there is a Dodger card. I don't really need another modern-day Duke Snider, but at least it's not another Nationals card.

This also gives you a good look at the only design selected by Archives this year that interests me in the least -- the 1973 Topps design. 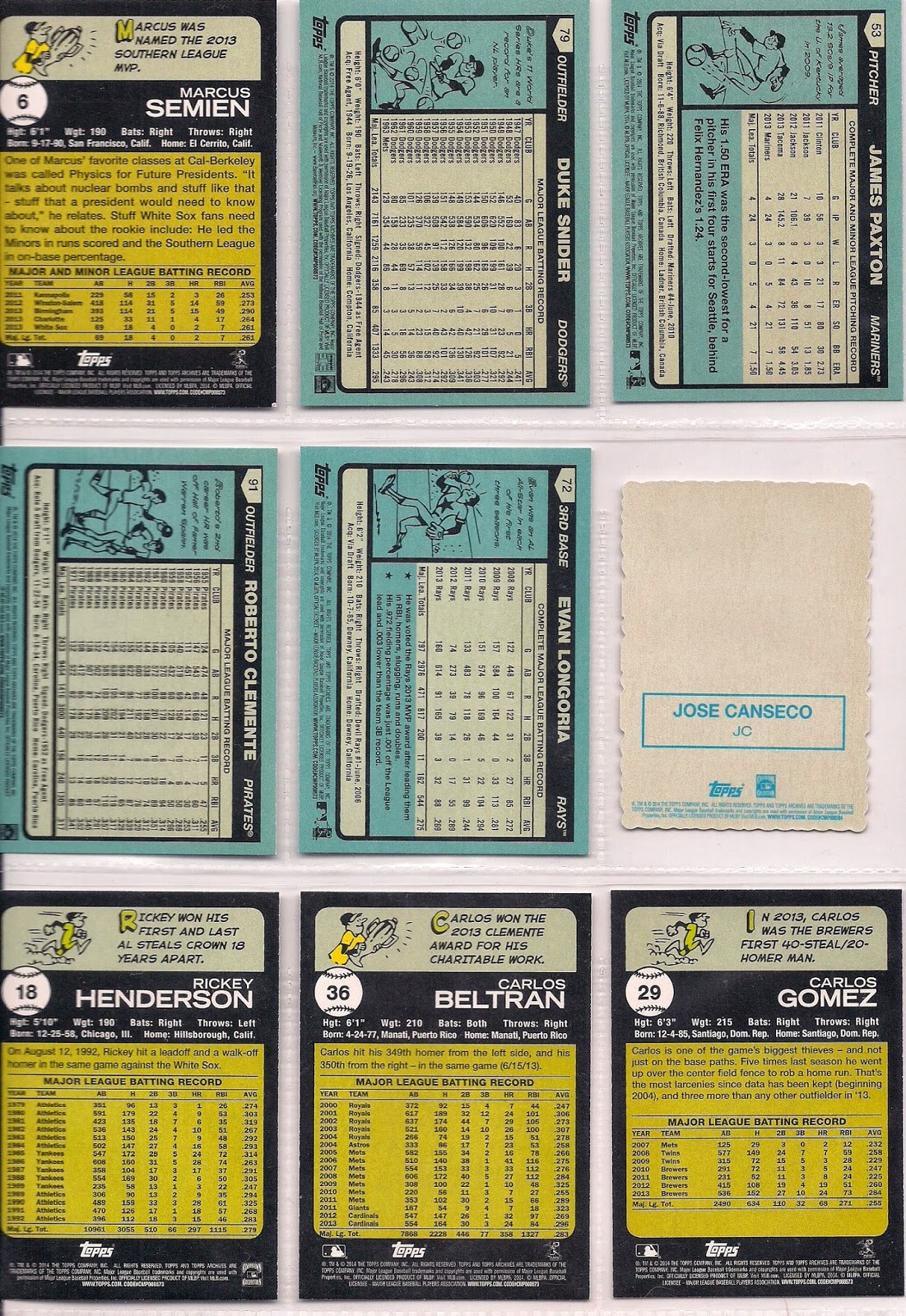 Those are the backs. The 1973 and 1980 card backs have some of the most interesting cartoons in Topps history. But these ones are pretty dull.

You will notice I didn't pull a single shortprint. Anybody who is chasing this set I hope is buying boxes, because collation at the retail outlet is insanity.

This is the third consecutive year that I have bought these cards and instantly thought "now, what do I do with them?"

As usual, the Snider is staying with me. A couple others I imagine will interest someone. The rest will go in a box, to sit forever -- wishing they could be in a binder, with the Fan Favorite sets from 2003-05.

But they can't. Because they're inferior versions of what could be. Of what should be.

And that's why this set is the most disappointing thing Topps has produced in the last five years.

Yet, I had to check it out.

Offy said…
The main thing that interested me in this set were the Major League cards, but once I saw that Topps was offering a special 5"x7" set of the cards, I jumped at those with a 10% off code and left these as an afterthought. Any autographs of players that interest me can usually be picked up fairly cheaply on eBay. The cost of the box, the short prints, and the lack of pulling anything that warrants the price of the box will keep me far away from this stuff.
June 6, 2014 at 9:24 PM

Paul Hadsall said…
I'm ok with them using the 1989 design for this set. If you can ignore the fact that we all have a million of the cards & are sick of looking at them, the design does have some classic appeal.

Tony L. said…
I guess the higher-ups at Topps are trying to spur sales of the 843,294 cases of 1989 cards that they still have in their possession by including their designs both as the "die-cut minis" and then in Archives. I would have preferred 1979 instead.

Hackenbush said…
Can't argue with anything you've said. The 1973's are my favorites too. I own the three ATFF's sets and have them in a binder as well and nothing has come close to beating them. I've yet to spend a dime on Archives.
June 6, 2014 at 9:50 PM

hiflew said…
I am happy that Topps "borrowed" my idea from my 2012 Quarry Unlimited set and made the Tigers orange. I am not going to collect this entire set, but I am going to have to collect all the 1986 Topps knockoffs. If anything just so I can do a side-by-side comparison with my set.
June 6, 2014 at 10:47 PM

Nick said…
"Archives can't be what I want it to be."

That pretty much sums up my feelings towards this set in one sentence. So much wasted potential.
June 6, 2014 at 11:28 PM

Stubby said…
I can't disagree with anything you've said about Archives. What tips me in the direction of buying them, though, in nearly obscene amounts, is this: The flagship card designs of the last 5 years or so are all the same and all irredeemably ugly. All the pictures in the flagship look exactly alike, making the flagship even uglier. 2014 is, without a doubt in my mind, the ugliest Topps card design of all time. Quite possibly the ugliest card design of all time, period. At least Topps was still TRYING when they first came up with the designs used in this set. And you not only get a mix of old timers and current stars (albeit all the good ones as SPs), you get a good mix of posed, action and candids, as we discussed before. I am not so unrealistic as to hope that Archives would aspire to what it could be; I just wish the flagship could aspire to be what Archives currently is (albeit without the short prints). Having said that, I have little doubt that 2015 Topps will be even uglier and more boring than this year's flagship. I feel Topps hit a home run with Heritage this year, so they could certainly do better if they wanted to. They just don't want to.
June 7, 2014 at 12:11 AM

Jim from Downingtown said…
I have a great solution. It avoids both issues of a) us getting crappy cards, and b) Topps making money from us with their sub-par junk: Buy the ACTUAL old cards.
June 7, 2014 at 12:33 AM

The Topps Baseball Fanatic said…
i don't like the fact that they threw in the 1980 design again like they did in 2012. Topps makes too many "retro-style" sets that it's becoming a snoozefest. I say that they should stick with just heritage and eliminate the rest.
June 7, 2014 at 6:44 PM