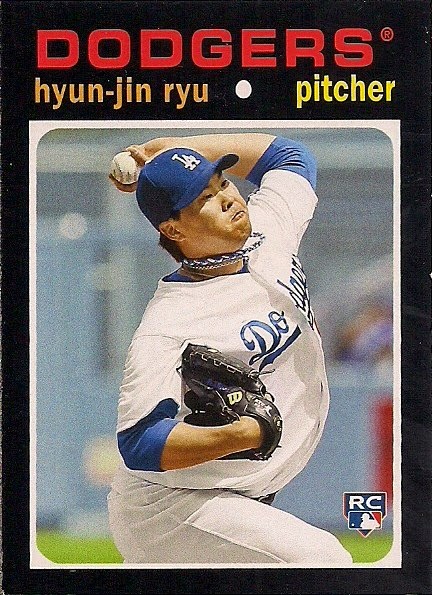 But then I opened the mail. And there was a note from my friend Tom from Oregon, who sends me stuff every once in awhile.

And now I'm posting. At whatever time this is.

You'll see what Tom wrote to get me off my butt in a minute.

But first some cards from Tom and a couple other people.

As you know, I haven't devoted much of this blog to current cards lately. Ever since Heritage, Topps has issued one bullshit set after another if I may be so ... accurate. I bought a rack pack of Opening Day and that's the last bit of new that I have acquired. Since then, Gypsy Queen, Bowman and Archives have arrived (along with some high-end crap I can never keep straight) and I haven't budged.

Some other folks, though, aren't as picky as I am, and thanks to that I received my first taste of GQ, Bowman and Archives recently. 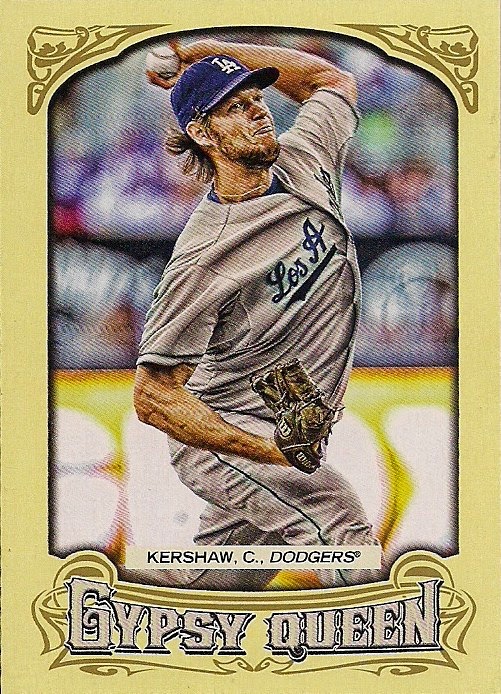 This here is my first Gypsy Queen base card. It's from Nationals fan Jason, who is on Twitter.

Giving my opinion of GQ at this stage is pretty pointless because I continue to find the set horrifying yet Topps still keeps releasing it each year. But, I can't resist giving opinions, so I'll just say that it's nice they decided to put a little color in GQ this year. Of course, it's about the worst color they could have selected. "Puke yellow." Yup, that'd be my first choice, too. 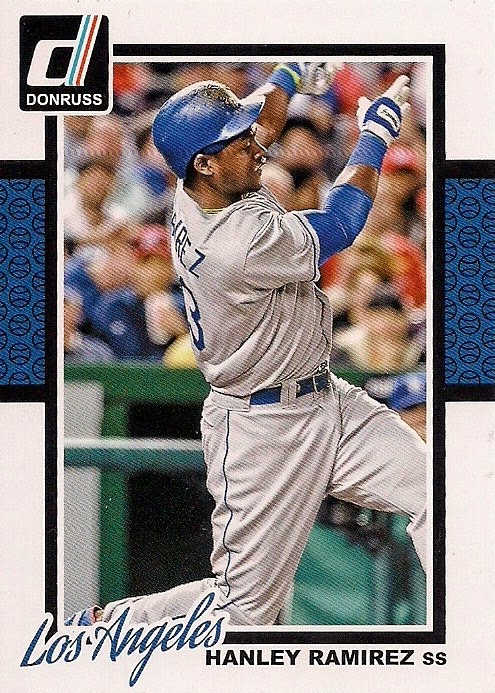 Jason also sent this Panini Donruss card of Hanley Ramirez. I've also weighed in negatively on this set. So, let's move on before my mom starts lecturing me about not being able to say something nice. 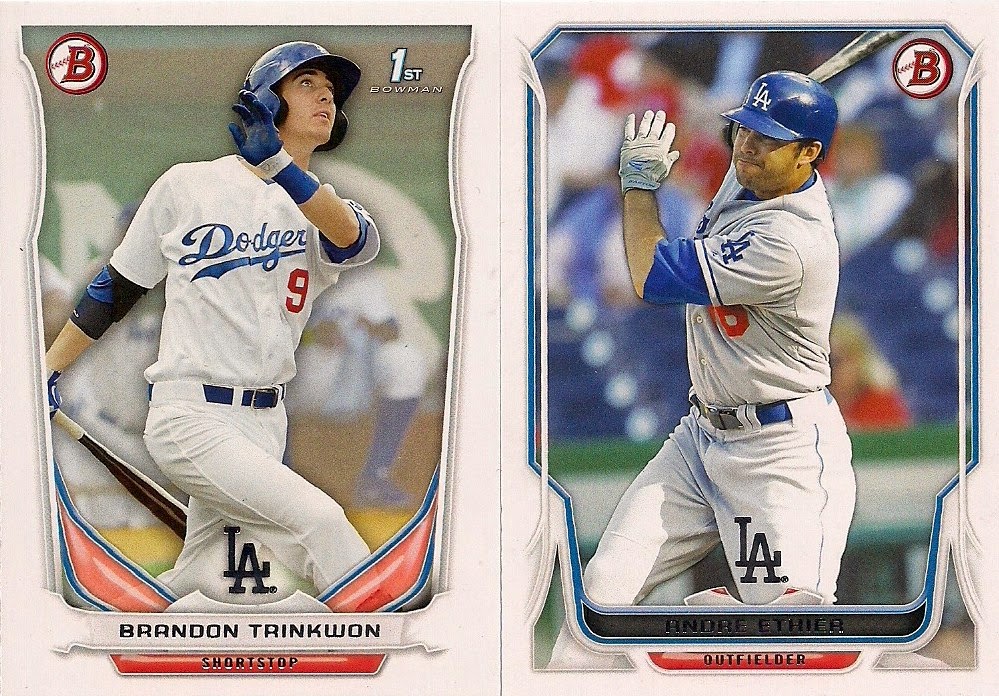 Ryan from Ryan's Pitch, another Twitter friend of mine, sent me my first look at this year's Bowman.

It's about as exciting as it usually is. I mean who isn't fascinated when they pull cards of people they've never heard of in their lives? Brandon Trinkwon COULD be a Dodger prospect. He also COULD be the guy I saw walking down the street today twirling his cap and singing to himself dressed in a Dodger uniform. If we didn't have the internet, Bowman could pull tricks like this on unsuspecting collectors every year. 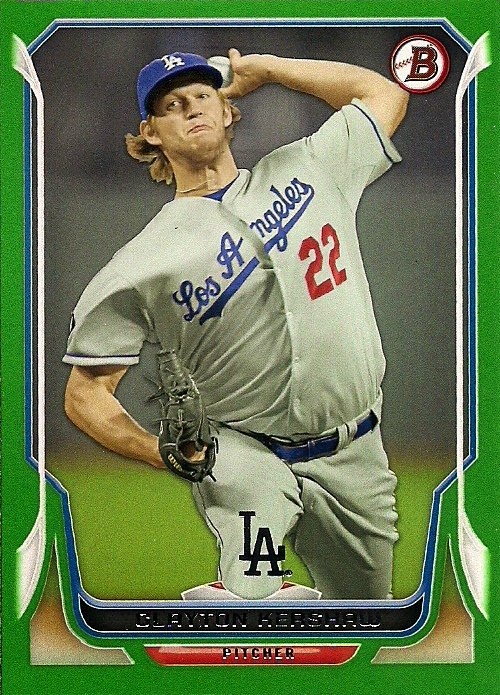 Of course, Ryan had to go and make me feel all guilty about bad-mouthing Bowman with this green, numbered beauty of my favorite player. There is something about the green and the waviness that makes me think of ribbon candy. Ribbon candy isn't my thing, which is good, because I never want to be tempted to nibble on a card.

And now we're down to the card that Tom from Oregon sent.

It also happens to be a short-print. Because Archives thinks it's good enough for short-prints (it's not). 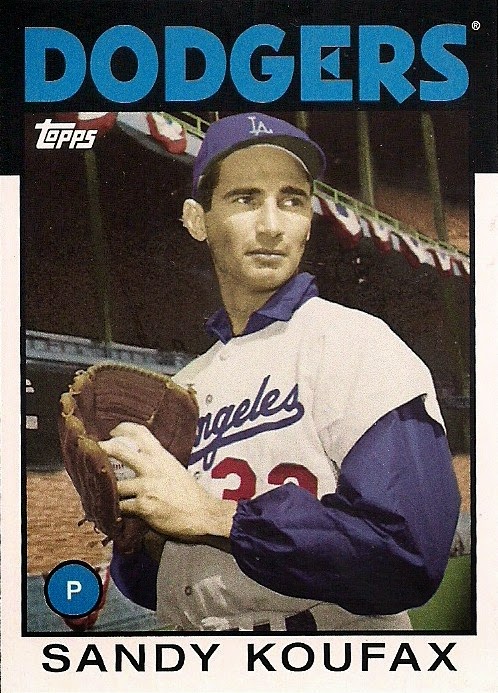 I instantly feel sorry for any Dodger fans who have to flag down an SP Sandy ... in the 1986 Topps design.

But at least it's a different photo than the usual. I half expect someone to tell me that Koufax is airbrushed into a "Los Angeles" cap for reasons no one can fathom. (If that is the Polo Grounds in the background, then I have my suspicions, although the Mets played in the Polo Grounds for their first years, but then why the bunting?)

Still, no unfortunate revelation like that will ruin the reason why I am posting at this random time after I decided I didn't have any time to post.

And that's because the last line of Tom's note read like this:

And so it does.

Thanks for the cards.

Nachos Grande said…
I hear you. After this year's Heritage I haven't purchased anything new either. I really wanted to like Archives but after two years of not completing the set Topps finally couldn't fool me for a third year straight. Here's hoping Allen & Ginter doesn't suck... If it does, I might be done altogether with cards.
June 9, 2014 at 4:08 PM