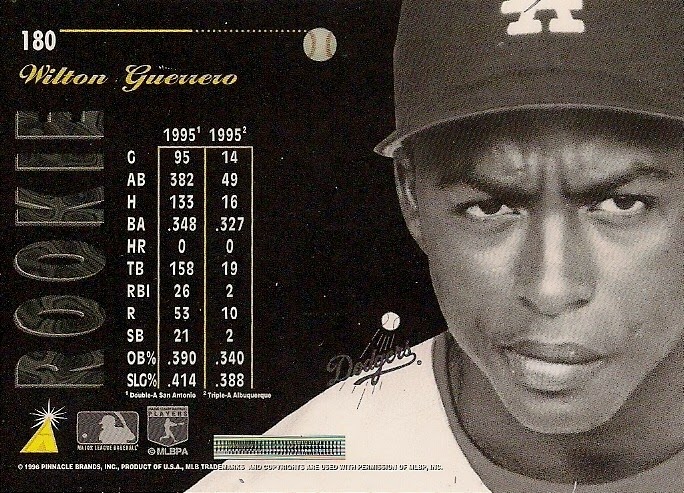 Wilton Guerrero is expressing the way I feel today. I'm really beginning to question whether I have the time to write a once-a-day blog anymore.

June used to be a carefree month. Outside of July, the absolute best. But now, it's overloaded with projects and obligations and work on my days off. I have a notebook of blog ideas, and it taunts me even more than ever. There is no way I can formulate one of those ideas into a post.

There is one thing that makes me continue to keep up the facade. People are still sending me cards.

As long as they send them, I'll keep posting them.

Whether it's in a format that's readable, well, I make no guarantees anymore.

So, here are some cards from Max of Starting Nine. I think they're pretty cool. Maybe you will, too 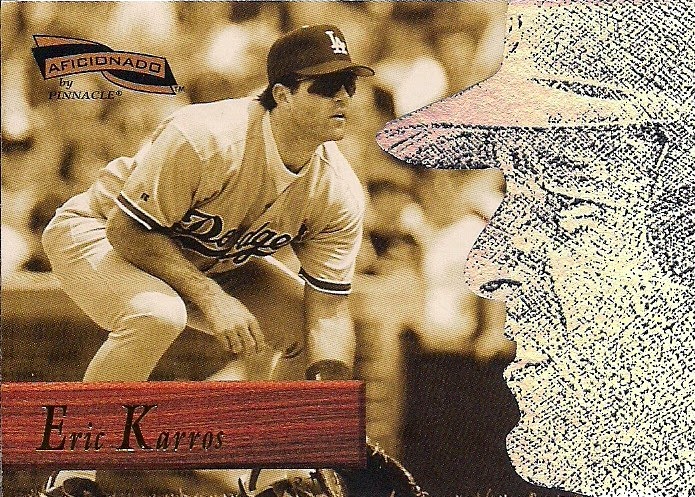 Max sent several of these '96 Pinnacle Aficianado Dodgers cards. I've called this set one of the most grotesque of all-time. Fortunately, I need to show only one of them here as I had all the others already. 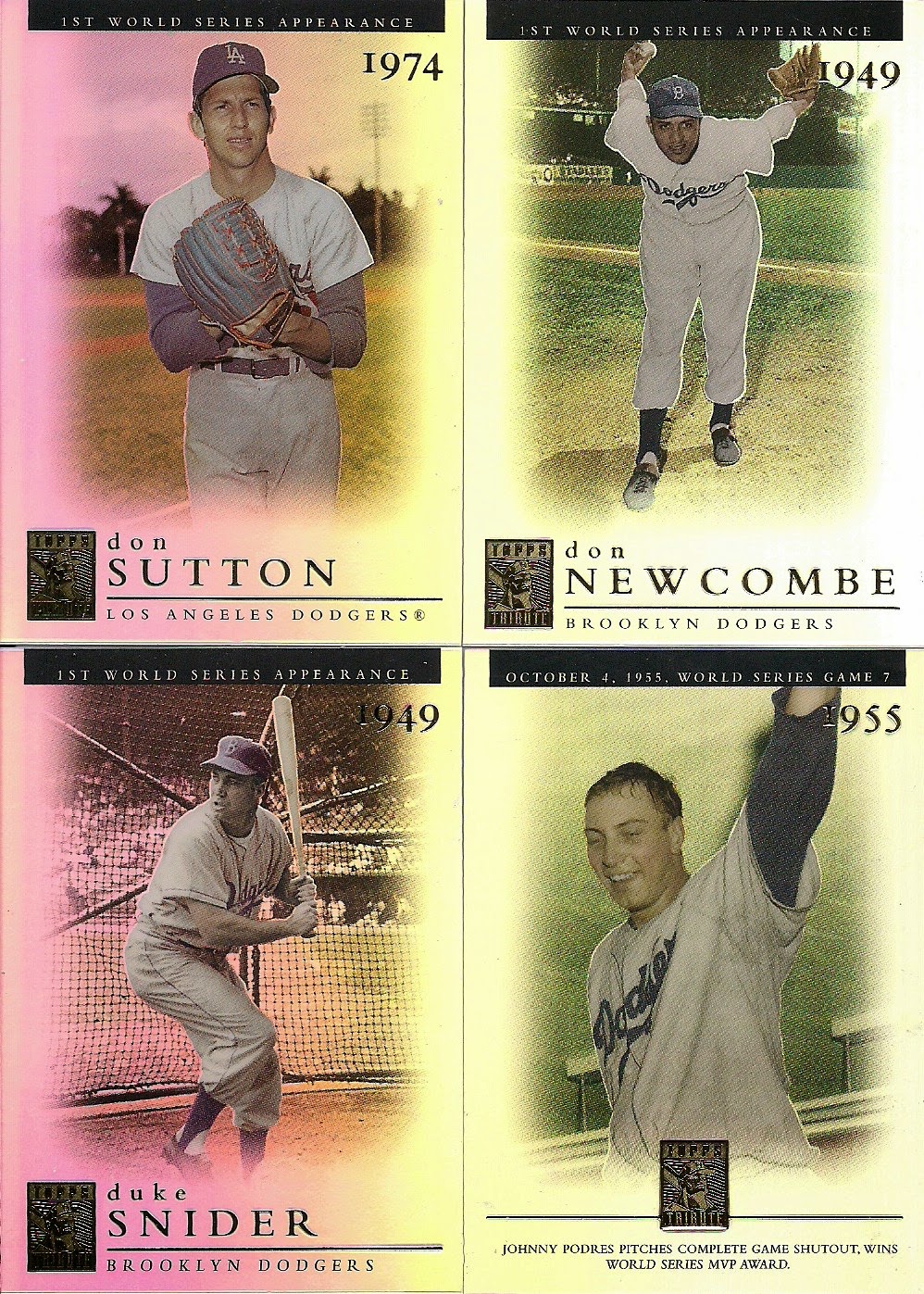 I think Max stumbled across a large lot of Topps Tribute cards at some point. These are four more from a wonderful avalanche of Tribute I've received from him. The Snider and Podres photos have appeared time and again. But the back of the Podres card makes up for it: 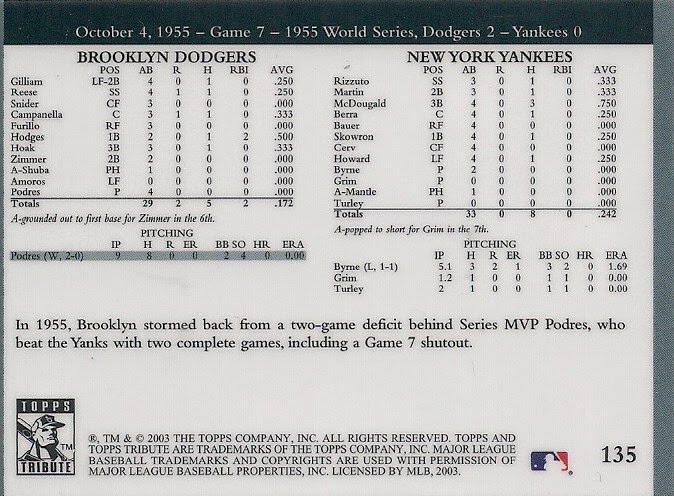 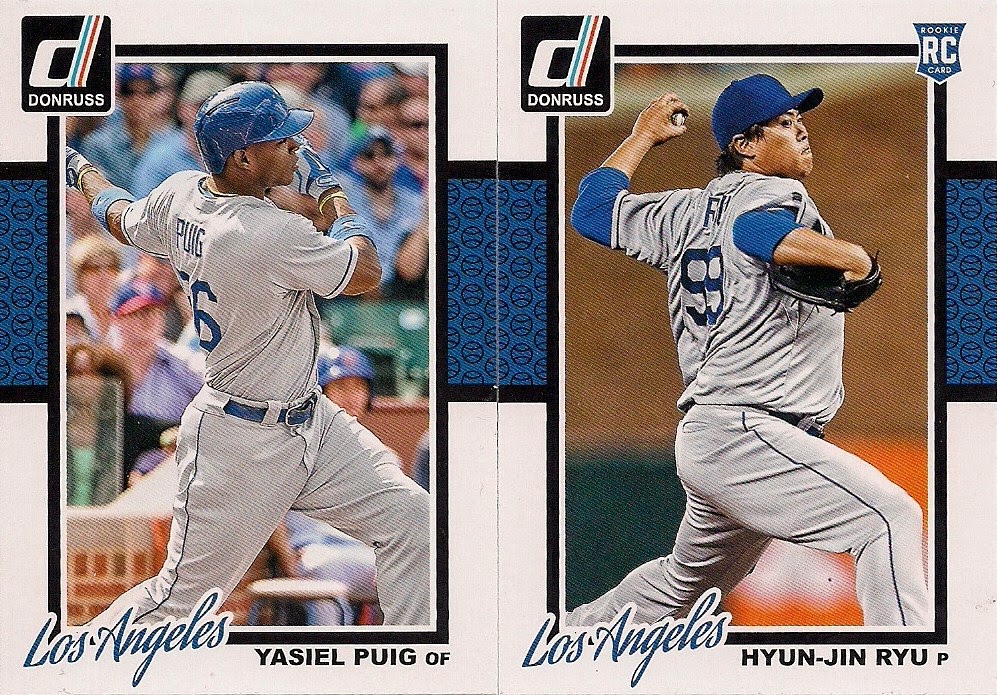 Max is also my chief supplier of 2014 Donruss cards. Someone needs to explain to me why Ryu gets a rookie card logo but Puig does not. 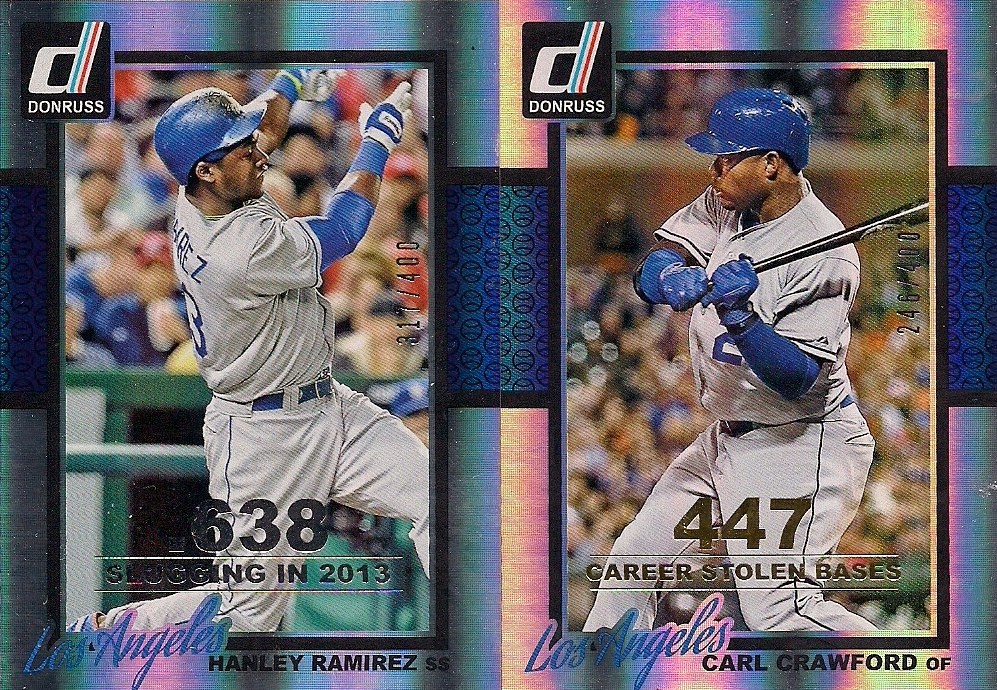 These are shiny parallels that are lost on me because it's a logo-less set and because I don't remember the old production line Donruss cards (at least I think that's what they're referencing). 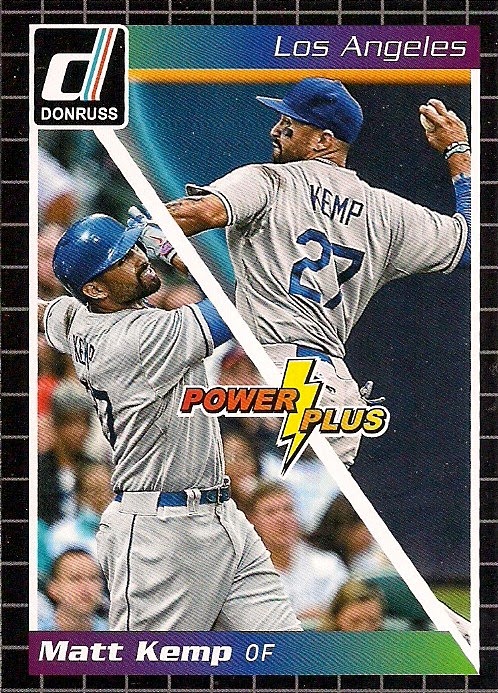 This, on the other hand, is very Donruss-y. And there's so much going on with it that I don't notice any logo issues at all. Perhaps the whole set should look like this. 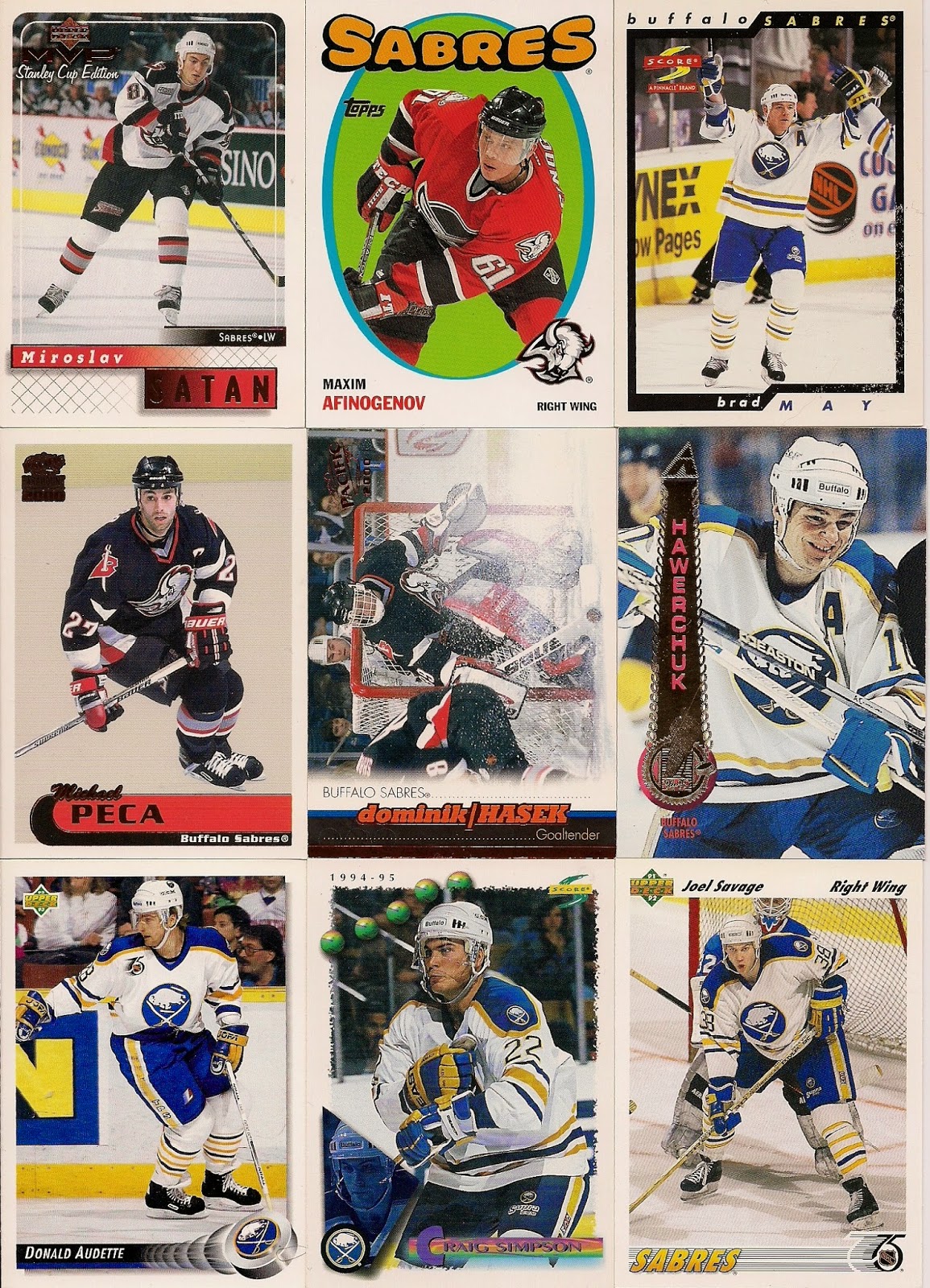 I also received a small stack of Sabres cards, helping me recall the good old days when the Sabres actually featured players worth watching, who were NHL household names.

I especially appreciate the Dominik Hasek card. The most impressive goalie I've ever seen. He also drove really, really, really fast through the streets of Buffalo. 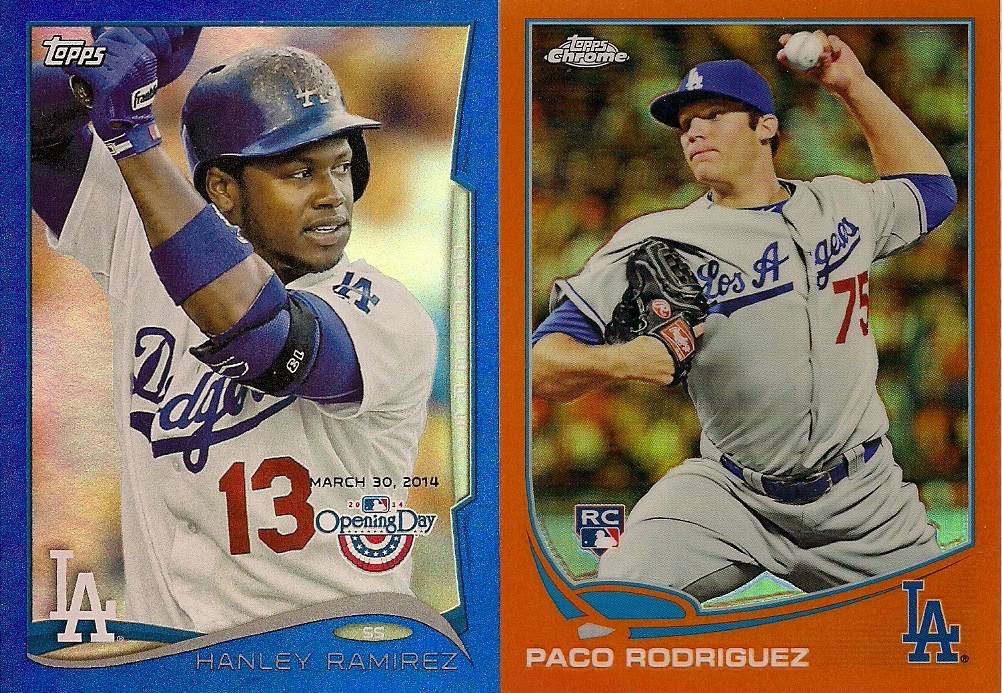 Here are cards that are more my speed. I proudly admit my allegiance to colored parallels. 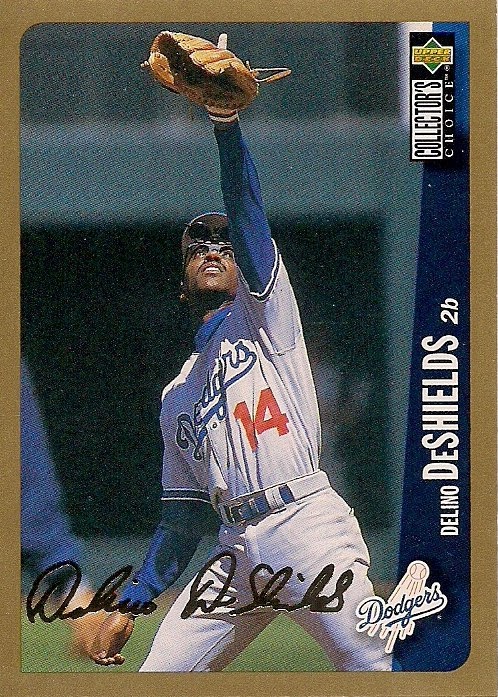 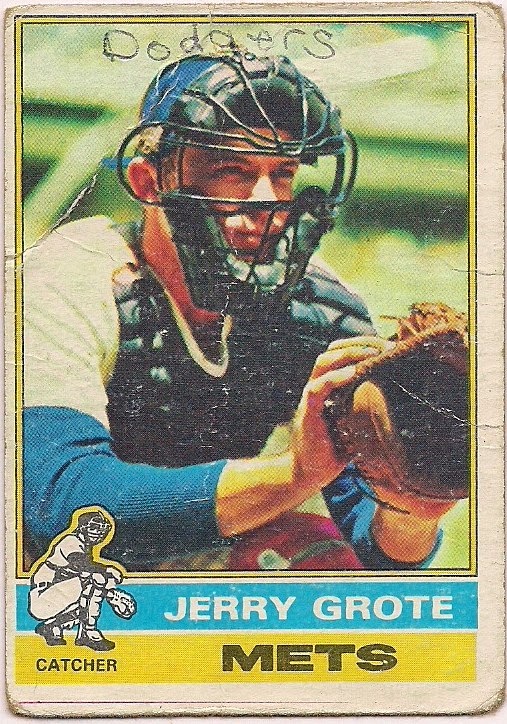 This isn't even the worst-conditioned 1976 Jerry Grote card that I own. But it IS the first one with "Dodgers" scrawled on it. I don't know where one obtains a card like this. Are card shows actually offering up scrawled-on cards? 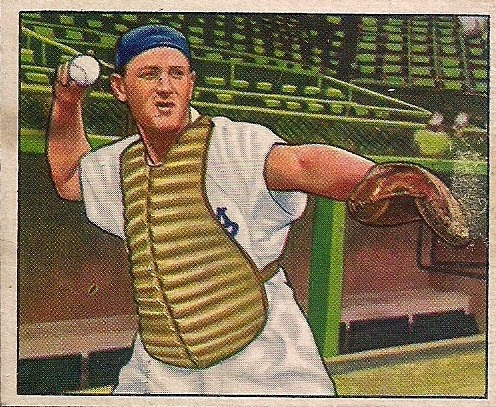 Best-for-last time. This is another 1950 Bowman card. I think I have five of the Dodgers now. I better put up a want list.

This is a card of Bruce Edwards, who caught for Brooklyn between 1946-51 before being dealt away in the Andy Pafko trade. He was also the Dodgers' starter at catcher until Roy Campanella came along in 1948.

But good ol' Bowman was still clinging to the old days on the card back:

Bruce wasn't even the best receiver on his team at this point.

So, that was quite the eclectic selection of cards from Max. And I'm very appreciative as usual.

I really hope I can keep posting every day because I really do want to do that.

But not if I have to sacrifice my sanity.

petethan said…
From experience, I cannot guarantee that a break in posting is enough to retain (obtain?) sanity. But here's hoping that you can do it all...
June 16, 2014 at 7:55 PM

acrackedbat said…
I realized how much I missed writing after discovering your blog, Night Owl. I'd been on a two year hiatus. I'll do my part sending cards, if it keeps the "pen" moving.
June 16, 2014 at 10:16 PM

jacobmrley said…
I want so much to blog everyday but it never happens for an abundance of reasons. If you feel like skipping a day or two, we will all forgive you. If the blog becomes a chore, what is the point? Somewhere in between pushing yourself and enjoying yourself, the blog should lie - or something like that.

That glorious Jerry Grote card came in a Listia lot I picked up of some really well loved 1970's cards (hey, free is free). I figured you'd get a kick out of it, if nothing else. Mission accomplished.
June 17, 2014 at 1:57 PM