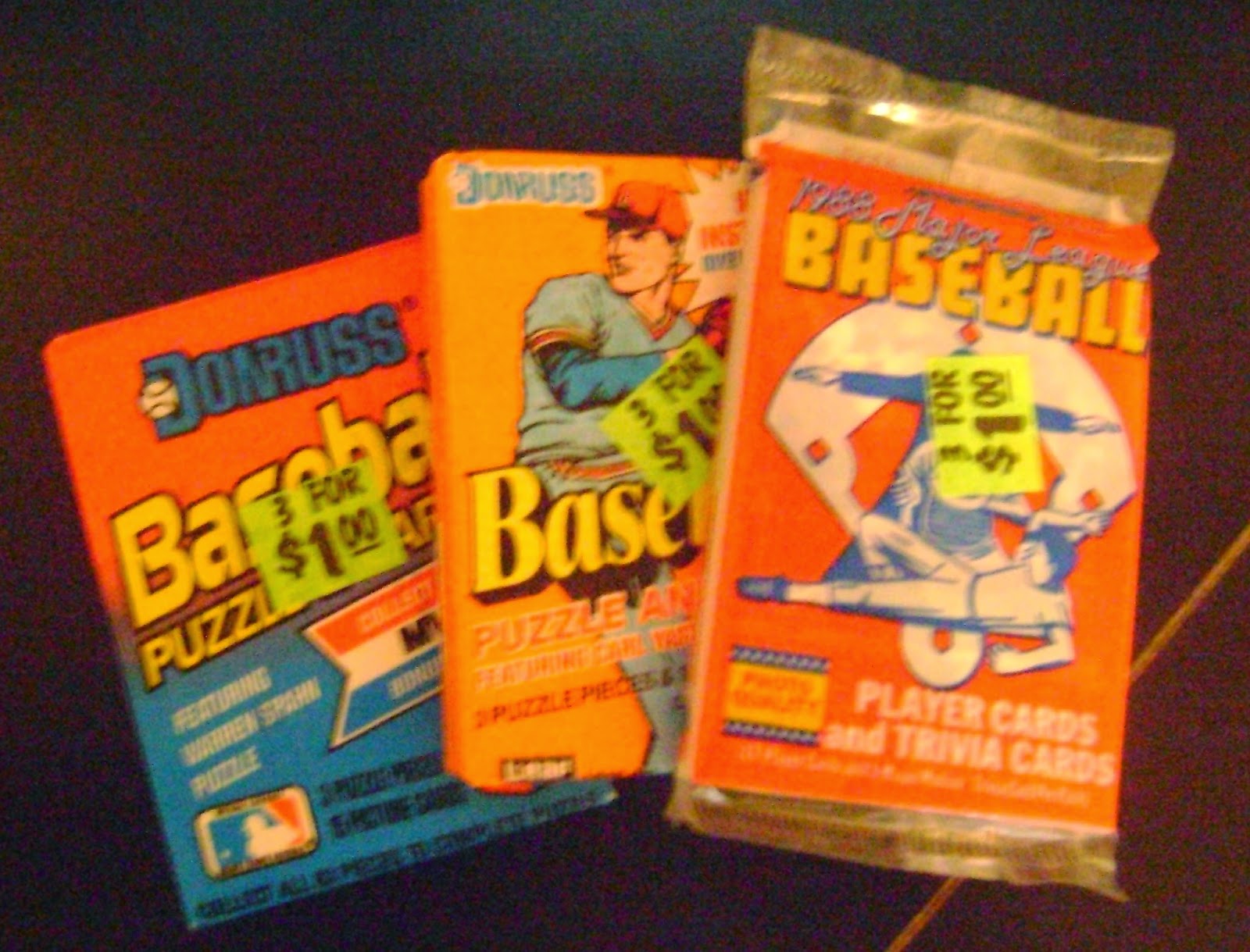 I've opened a lot of baseball card packs in my life. But I am well aware that I haven't opened as many as some people.

Even years later, when some of those packs continued to reproduce, I never bothered with them. Why, on earth, for instance, would I want to open 1991 Donruss? (I actually did open a pack for this blog, though. For the greater good, of course).

So, when my wife stumbled across some 3-for-$1.00 junk wax packs at the dollar store the other day and brought them home for me, I was elated. "Finally," I thought, "a chance to open 1988 Score."

I never opened '88 Score in 1988. I wasn't even aware Score existed until 1989. As for the other two packs up there, it's possible I opened a pack of '89 Donruss and '90 Donruss at some point long ago. But if I did, it was just one pack. And I was not impressed enough to retain the memory.

You've seen all these cards before, so I'll make this as quick and painless as possible. 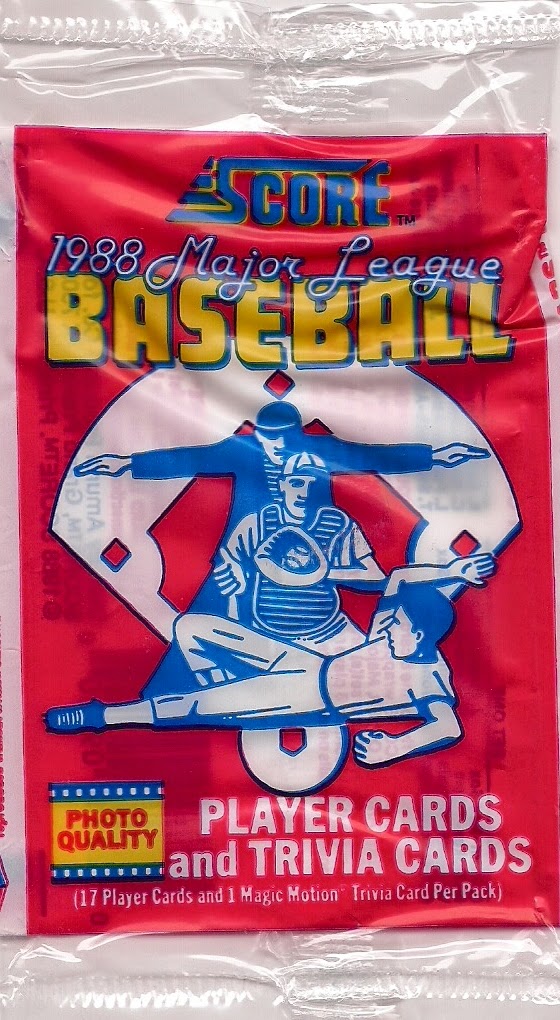 First, I have this entire set already (I think the fact that I collected the full set without opening a pack speaks for itself).

Secondly, I wasn't aware that the cards were sorted in packs by the various colors. In this pack, it was three purple, followed by three blue, three red, etc., until there were two yellow at the end. By the way, it's always annoyed me how '88 Score is front-loaded with stars. 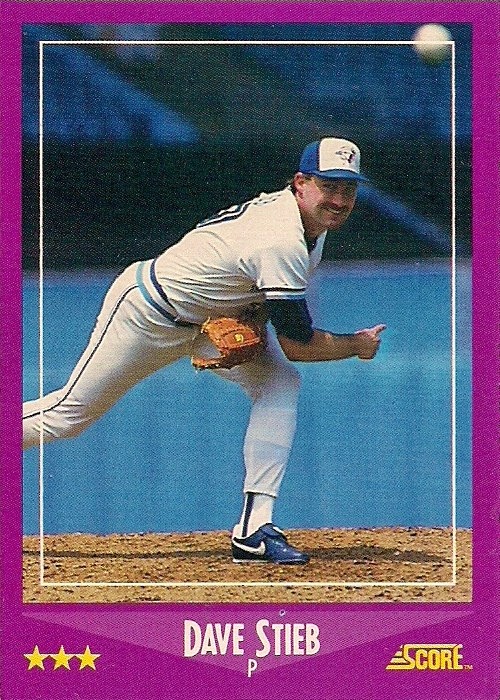 Biggest deal in the pack: Not too much excitement, but I'll go with Dave Stieb. 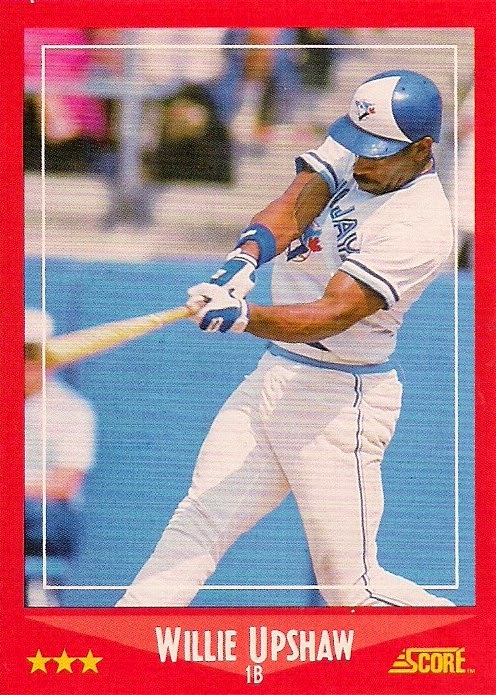 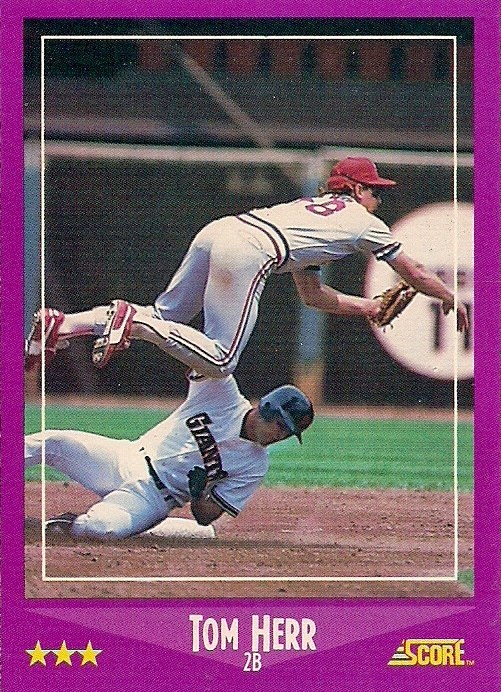 Favorite card in the pack: Anytime there is a Giant being retired on a card, I hold a little party. There is cake and balloons and everything. Maybe if you stop being a Giants fan, I'll invite you. Also, if that Giant happens to be Will Clark, this is now my favorite card of the entire '88 Score set. 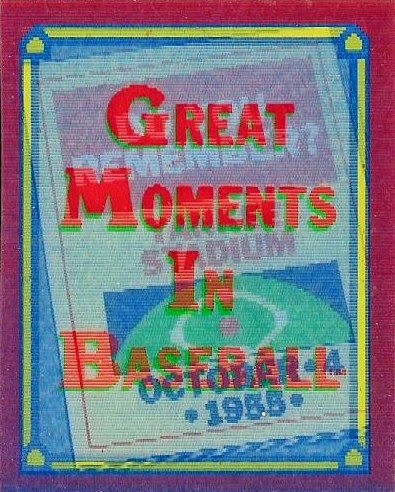 Special added value: In '88 Score it was these "magic motion" things, which were basically boring history lesson versions of Sportflics. At least this one recalls Sandy Amoros' catch. This set has a bit of a hold on me, but after opening this pack, I don't know if it does anymore. The usual dark photos that plague '89 Donruss seemed to overwhelm this pack. Also, the green-yellow borders, which I don't enjoy, dominated this pack. 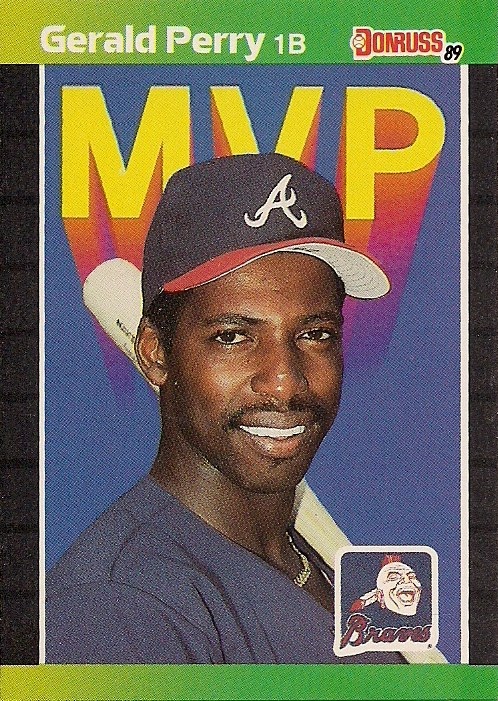 Biggest deal in the pack: I'll be blunt: this pack blew. I'm going with one of the MVP insert cards. And it's a really boring one. 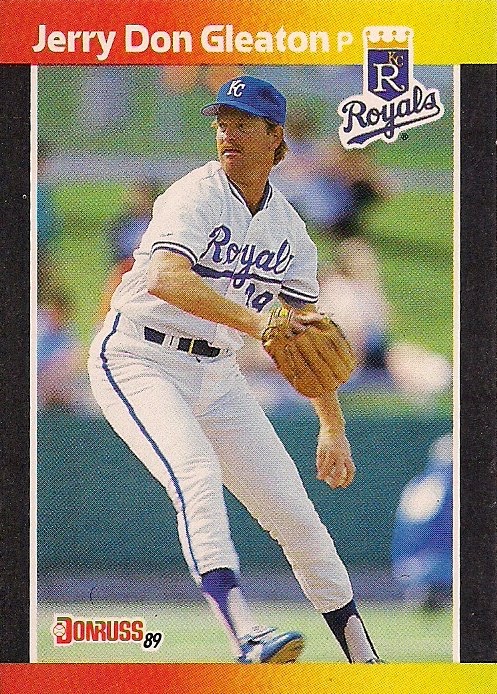 Best-looking card in the pack: One of only three non-shadowed cards in the pack. Why else would I select Jerry Don Gleaton? 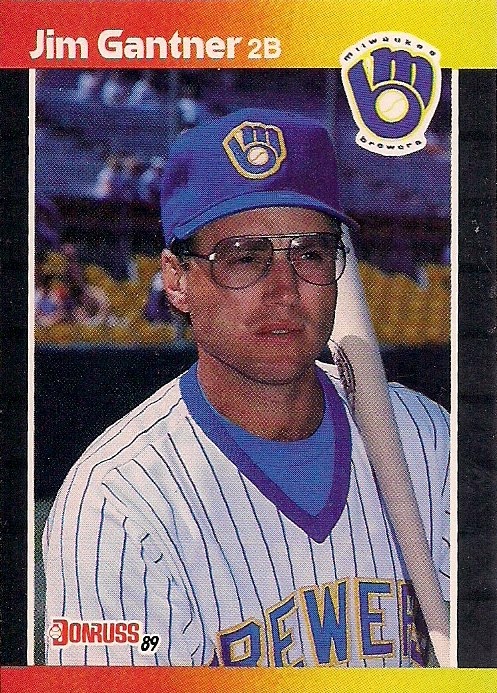 Favorite card in the pack: Have to go with some large '80s glasses. 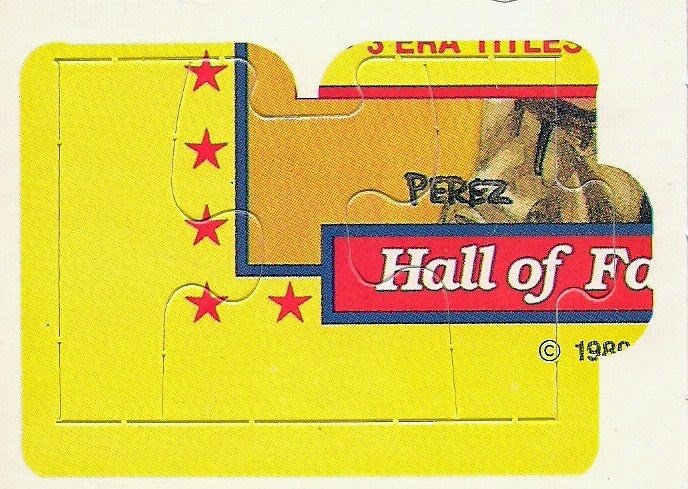 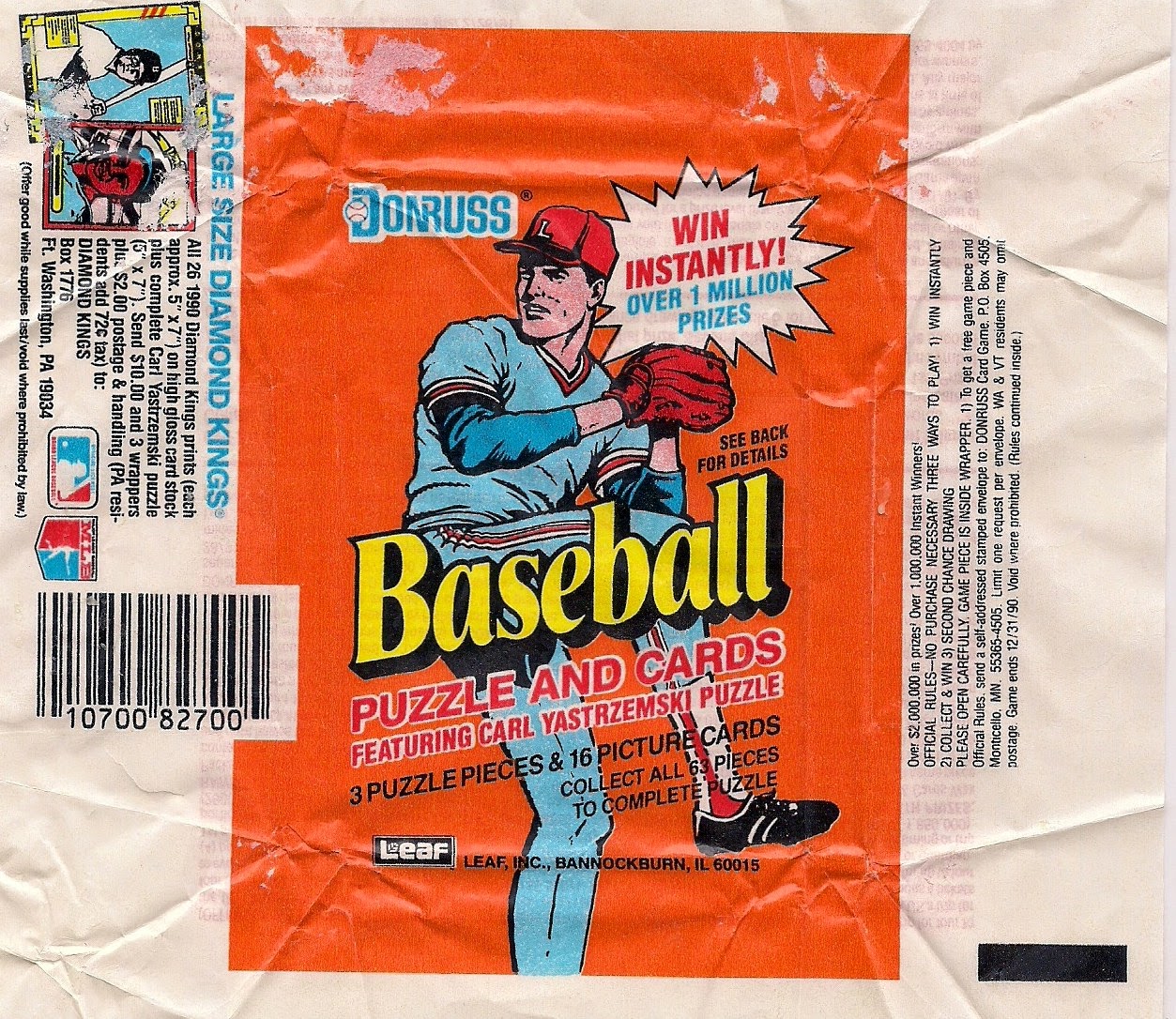 Both Dave Schmidt and Luis Polonia appeared in two out of the three packs I opened. I know that's not exciting. We're talking junk wax here. 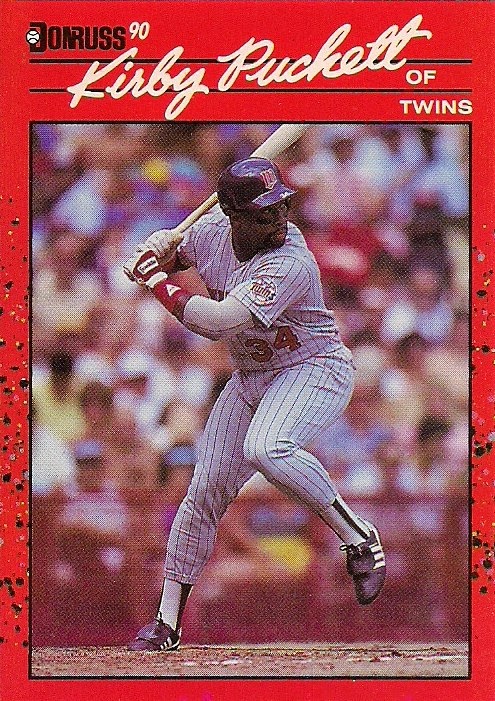 Biggest deal in the pack: Always nice to pull a Kirby Puckett card. Even all these years later. Even from 1990 Donruss. 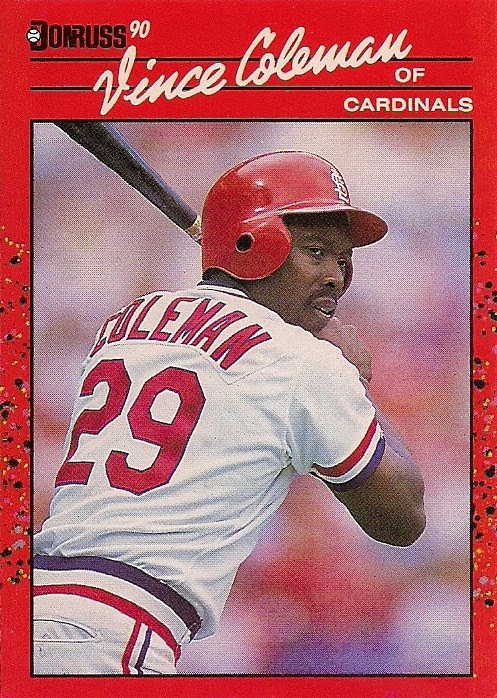 Best-looking card in the pack: The only players that look good in '90 Donruss are teams that wear red. 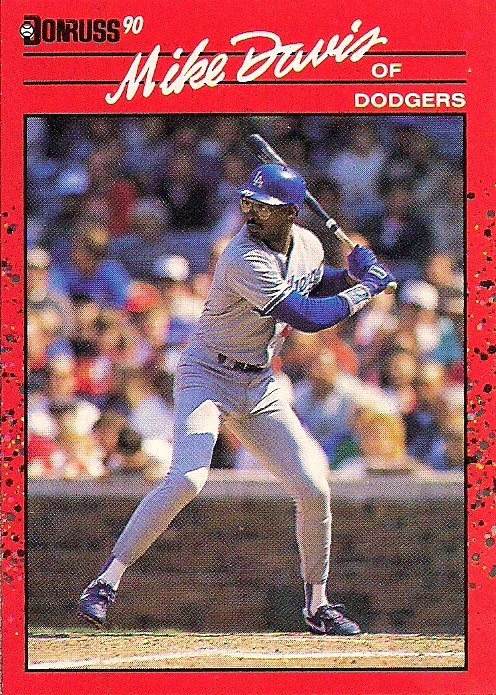 Favorite card in the pack: I actually pulled this card of Mike Davis on his birthday. 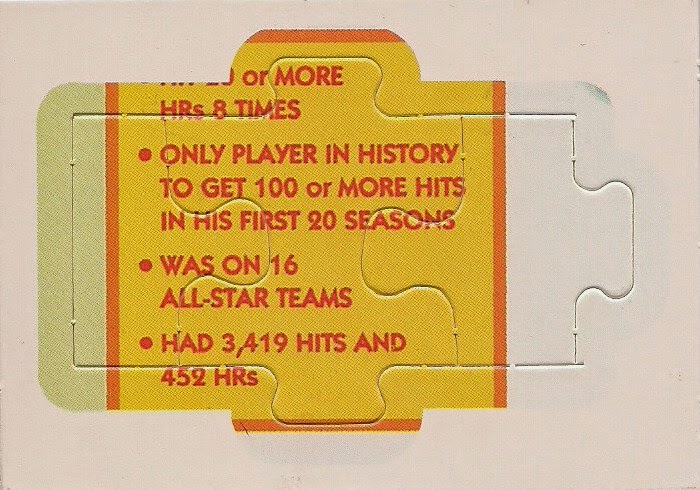 Special added value: Carl Yastrzemski puzzle piece. At least I have fewer of these.

I will store away the wrappers just so I can be reminded and not be tempted to return to that dollar store and open any others.

hiflew said…
I have opened literally hundreds of 1988 Score and every single pack had 3 of 5 colors and 2 of the 6th color although the color with two was random. I always felt like green was the short stack more than any other color. I don't have any solid data to back that up, but it's how I remember it.
June 14, 2014 at 10:27 PM

Stealing Home said…
The wrappers were the real prize, N.O.
88 Score gives you the disco-neon font. And the "cartoon" - i can't in all seriousness refer to it as an illustration,now, can I? - is priceless. Not only is it the strangest PATP ever, but it seems each participant was lifted from a completely unrelated play and shoved into the mash-up.

90 Donruss at least gives us a legitimate illustration, but who is that pitching, and what about that "L" logo on his cap? Does it stand for the Losers? Maybe the Lefties? And where did those million prizes end up? I've been blogging a while now and haven't heard about one person who took home one of those million.

I think all three of those '90 Donruss cards are pretty sharp. The Puckett photo is great despite the fact that the lighting it looks like it was shot at about 6:15 in the morning.