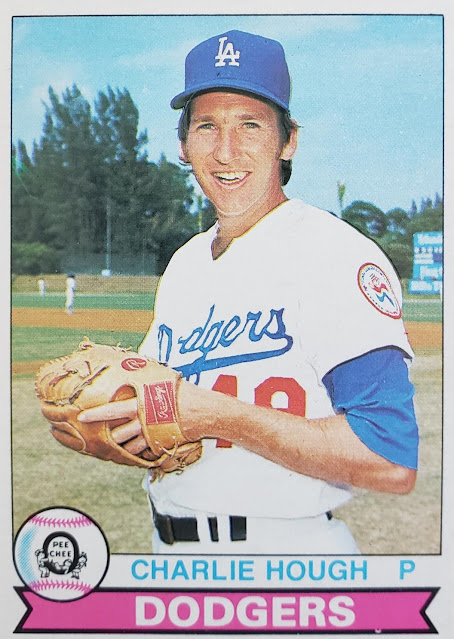 Happy Canada Day to my north-of-the-border readers!
It's tradition around here to try to acknowledge this day -- since I practically live in Canada according to some downstaters. I've been running out of topics the past few years, but fortunately this year the most recent set I've completed happens to be Canadian!
Charlie Hough was the last card I needed to finish the 1979 O-Pee-Chee Dodgers set. It arrived Monday, just in time for Canada Day festivities. (Someone who actually lives in Canada will have to fill me in on what those are). 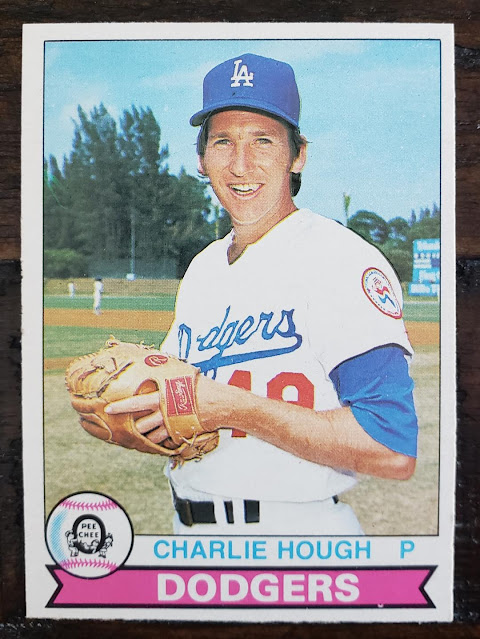 Here is the card with a wider crop so you can see the trademark ragged edges.
This is the third '70s Dodgers OPC set I've completed after 1977 and 1978. But '79 is a landmark OPC baseball set as it's the first one that tells you on every single card front -- not just the ones where a player has recently changed teams -- that the card is O-Pee-Chee and not Topps.
Of course, the most fun part of OPC, and the reason I look out for these cards, especially from the '70s and '80s, are the cards that show them with two different teams -- in this case, one is the Dodgers. 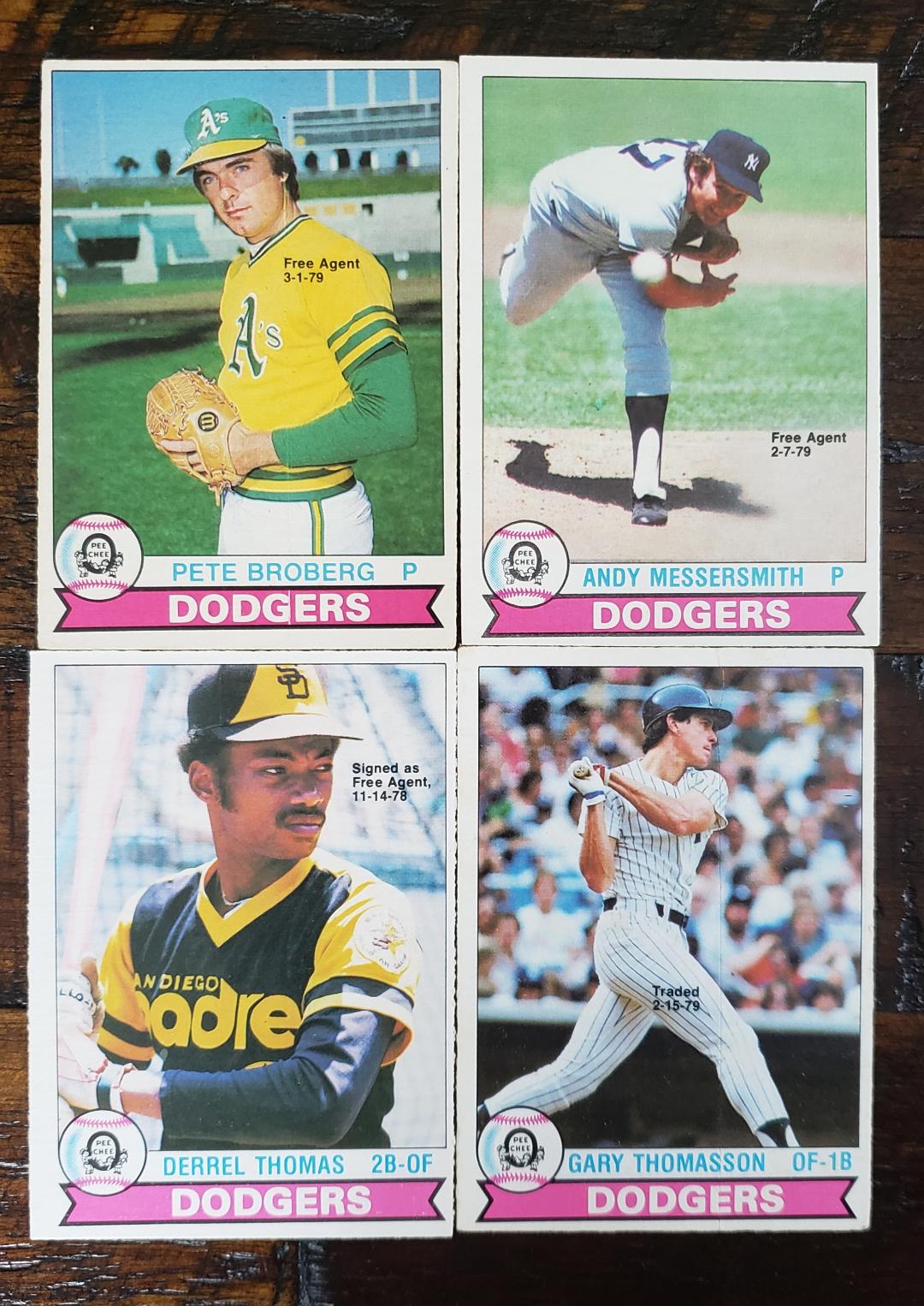 Here are most of the "transition cards" in the '79 team set. My favorite is the Andy Messersmith because it's one of the only cards acknowledging Messersmith's return to the Dodgers. The clashing uniforms of the A's and Padres are great fun, too. 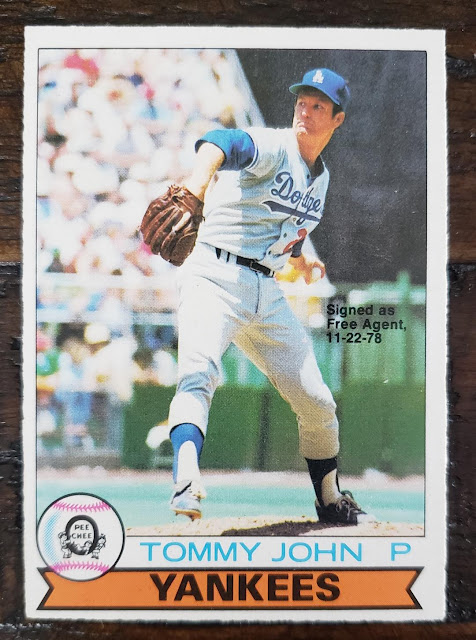 This is the only card in the team set that shows a player with the Dodgers but lists him with a different team. It's a famous one. I've written about it before, it was a Cardboard Appreciation topic (have you voted in the new poll?)
Of course, I must show you a celebratory picture of the entire team set: 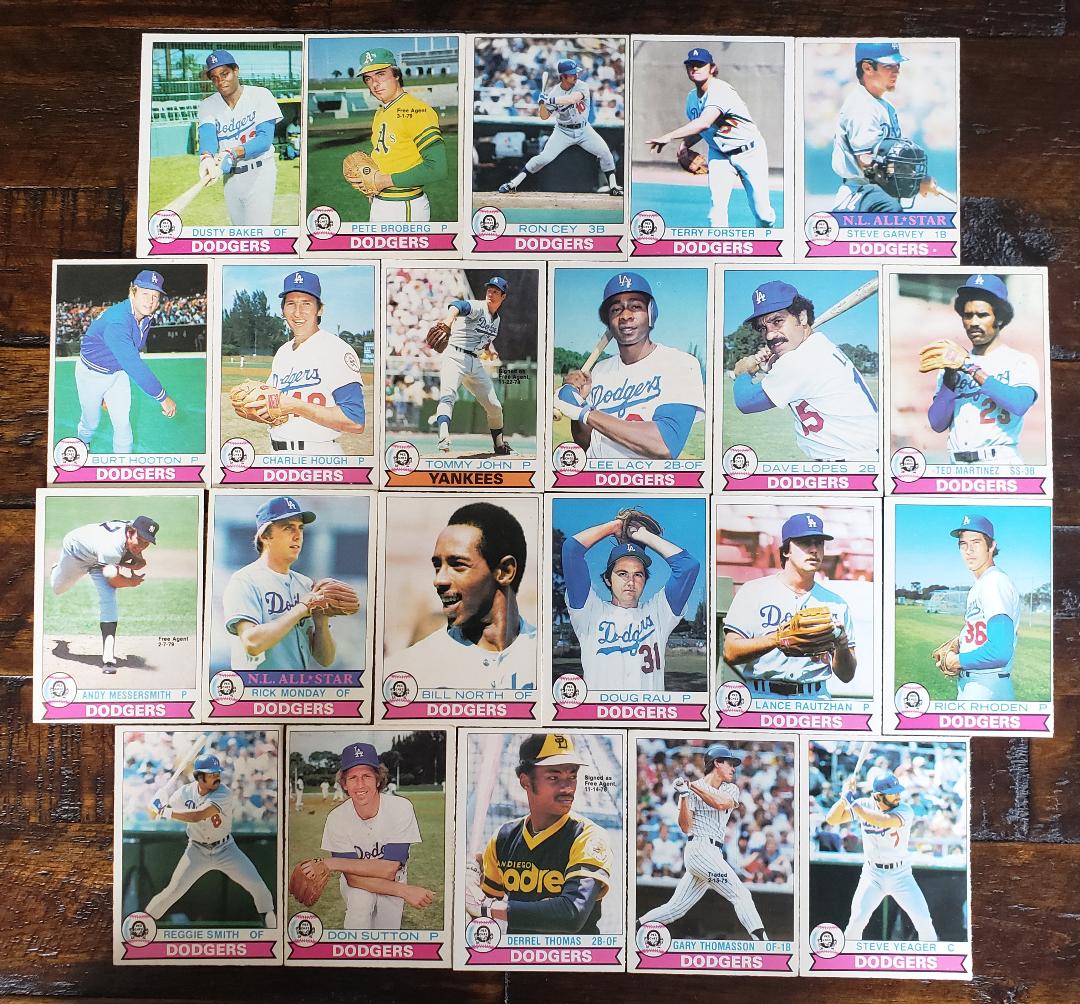 That is 22 cards in the '79 OPC team set (although Trading Card Database considers Tommy John a Yankees card).
The Topps Dodgers team set contains 27 cards, understandable as OPC sets were traditionally smaller during this period.
Players in the Topps set that aren't in the OPC set are: Bobby Castillo, Vic Davalillo, Joe Ferguson, Jerry Grote, Manny Mota, Johnny Oates, Bill Russell, Bob Welch and the Dodgers prospects card. That's mostly bit players that OPC avoided, although skipping Russell is odd and going without the Welch rookie card was a big miss. OPC also didn't include the team photo card.
I tend to forget about going for OPC Dodgers cards but have been trying to make up a little ground amid all the other pressing wants that I have. They're just so much fun to add to the collection and are pretty available to a cash-strapped collector like me.
That's because U.S. collectors ignore Canada like every other U.S. citizen does.
Except for us folks who practically live there ourselves. 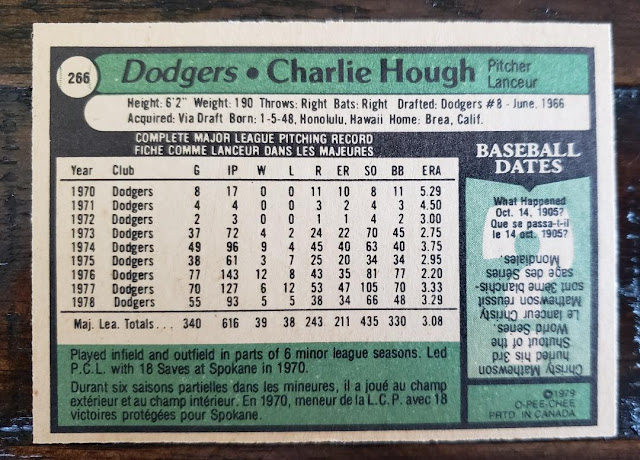 I almost forgot. Here is the back with all of the French and the crammed-in text.
Those celebrating, enjoy what's left of the day. I'm going to imagine that it involves looking through some OPC cards. ... At least it did for me.

Sean said…
As a Canadian living abroad I do miss the home country this time of the year. Mostly the occasion is marked similar to July 4th in the US - fireworks, beer and people just hanging out. Notably less gunfire in the Canadian one though.

Brett Alan said…
I just want to know what Tommy John and Darrell Thomas were "Signed as Free Agent" but Andy Messersmith and Pete Broberg were just "Free Agent". Blatant discrimination against people without two first names, I tell you! (OK, it's actually probably because they were signed later, but what fun is complaining about that?)
July 1, 2022 at 10:00 PM

Fuji said…
Congratulations on completing this team set. At first I thought you completed the entire 79OPC set... and I was going to be super jealous.

I just started building an A's OPC team set. A recent post over at Johnnys Trading Spot motivated me to pick up some 71T A's cards on eBay, but it didn't arrive in time for Canada Day. Even if it did, I won't have access to my scanner until probably tomorrow afternoon.
July 2, 2022 at 9:12 AM

RonEaston said…
As a Canadian Canadian, one that lives there and hasnt moved away and watches Canadian Bacon every five years to keep their free health care, the answer to what goes on on Canada day is "Tossing of the Beaver, Maple Leaf macrame, Maple syrup infused poetry readings, singing 10 verses of "Stompin' Tom Romp", and pond hockey in, not on, a pond. Oh and typing out run-on sentences.
July 2, 2022 at 10:32 AM

Nick said…
I've always wondered how the people at OPC decided to leave out of their set from the original Topps checklist. Russell & Welch are strange omissions & I'd be interested to know what their reasoning (if there was any) was there.
July 2, 2022 at 5:14 PM

Nick Vossbrink said…
I've never thought about doing a complete team set but I do like grabbing the "Traded" cards to go with my Topps team sets. Also I just grabbed the 1979 BK Yankees Tommy John.
July 4, 2022 at 9:41 AM

Mike Matson said…
Believe me, as a Canadian collector it's nice to have a couple collectors in the States that are willing to trade/send here. Though what a lot of them don't realize is it costs us just as much to send to the States...
We have parades, people getting together, fireworks. All the normal stuff..

Though after the fireworks, that's usually our day to perform the yearly ritual to remove all our bitterness and rage to be infused to the Canadian Geese.