The acquisitions before THE ACQUISITIONS 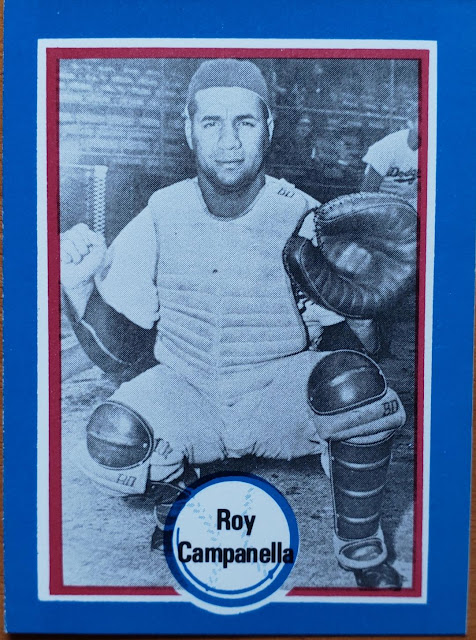 I received some cards in the mail today that will require their own individual posts. But before I do that, I must clear the way for them with some earlier acquisitions that my feeble brain is unable to figure out how to make them their own readable posts.
So, massive regurgitation of not-so-recent arrivals it is!!!
Let's start with the marvelous Roy Campanella Shakey's Pizza card above and some sends from Rod of Padrographs. 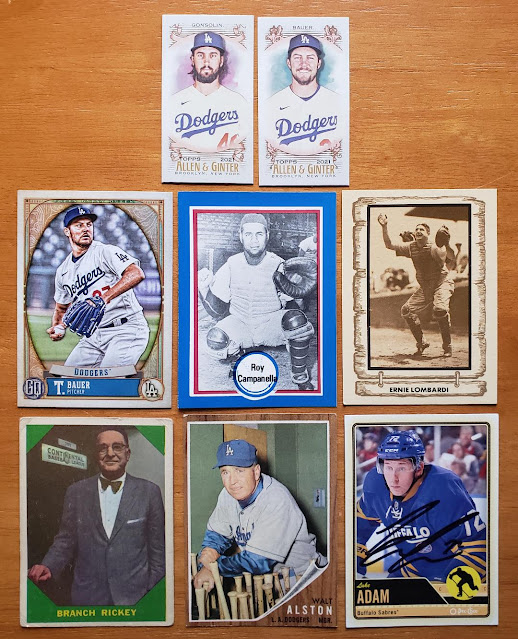 Rod recently held a small team group break in order to downsize his collection and I signed up for the Dodgers. All of the above cards (one is not a baseball player, I am aware) are either cards I didn't have or can repurpose in some fashion.
I don't associate Ernie Lombardi with the Dodgers at all -- 100 percent Reds. But the Dodgers are listed on the back of the 1980 Cramer card, with the other teams he played for, and Lombardi did begin his career with Brooklyn in 1931. He's also listed with the Dodgers in the set on TCDB, I'm not sure how it came up with that designation, unless the photo is a tip-off.
Back to the Campy card. This is my first Shakey's card from the 1976 Greatest Players set. It's a large set and several Dodgers are involved. I should probably do something about that. I've mentioned before that I had an obsession with Shakey's as a kid. Even though the pizza chain began out west and is predominantly known as a West Coast chain, there was one next to the Dairy Queen in Binghamton, N.Y., in the '70s and I really wanted to go in there. Never did. 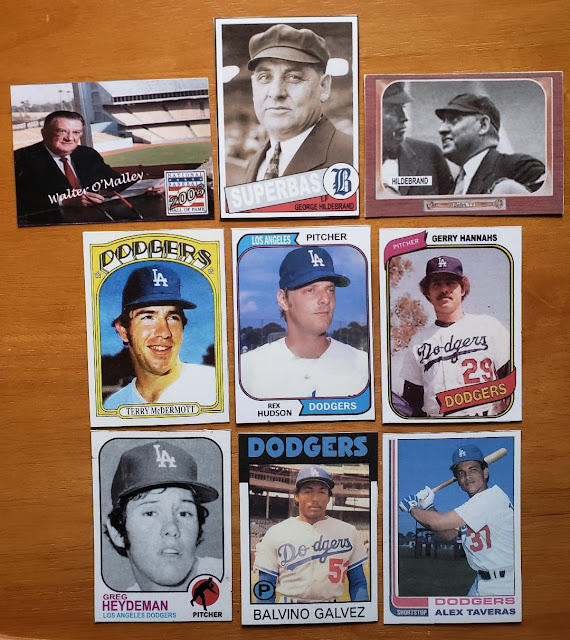 Rod added some of his famous custom cards.
He's sent me some before, specifically the three in the middle. My favorites are the Galvez and Taveras cards at the bottom. Both played minimally for the Dodgers in the '80s but I certainly was aware of them at the time and that means I wished I had a card of them then.
At top, George Hildebrand was an umpire for about 20 years until the mid-1930s. Before that he played briefly for Brooklyn and is credited with inventing the spitball when he was in the minors. Good stuff!

The requisite dupes in the package. This is another reminder that I am ALWAYS willing to send out my Dodgers extras to a fellow Dodgers collecting enthusiast. My email is out there. Just say the word. 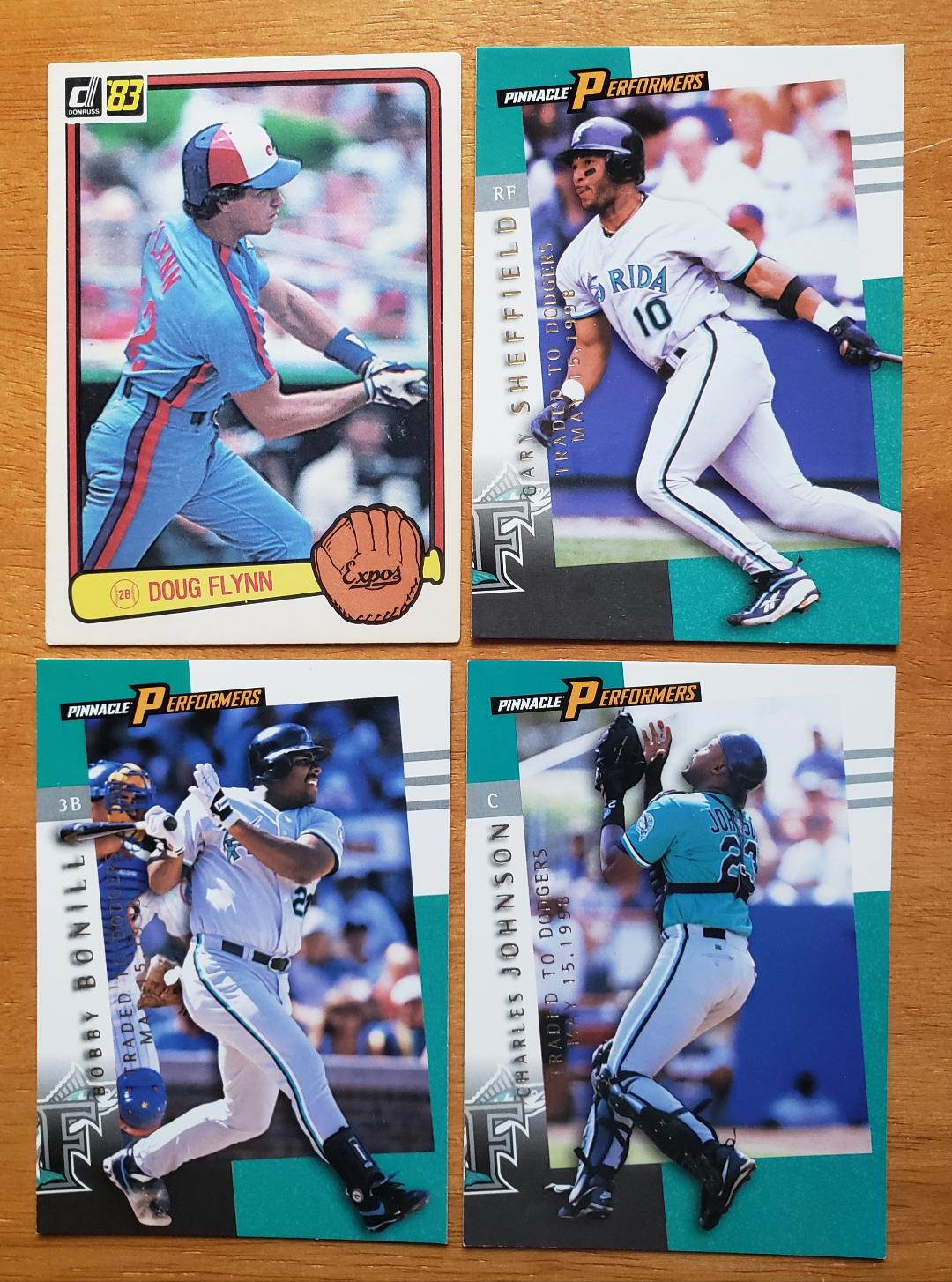 Moving on to another Time Travel card from Diamond Jesters.
Matt pointed out that the above three Marlins cards are also "Dodgers cards" and wondered whether I would pounce on them.
Well, I was a bit mortified about them as, gee they really do look like Marlins and also they're THREE reminders of that stupid Mike Piazza trade the Dodgers made. So I waffled for a little before finally agreeing to them. I added the '83 Donruss Doug Flynn to ease the pain a bit. 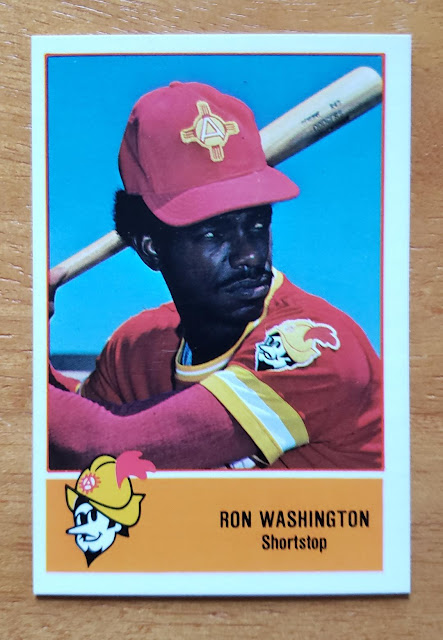 This little one-card purchase arrived from Shane of the card blog Off The Wall.
I often am late to the party on these card-sale threads on Twitter as they usually happen when I'm working. So I thought I'd for sure have missed out on this great Albuquerque Dukes card of the future MLB manager. Turns out either everyone had this card already or they've forgotten how wonderful Ron Washington cards are! And what about that hat??? If I was the vintage-hats-of-old-minor-league-teams-that-cost-60-bucks-to-own type of fan, I'd have one of those Dukes hats by now.
Speaking of Cramer cards, this is one from the 1978 minor league sets. These are the minor league sets I first knew, looking through collector catalogs. They have a charm and flash that minor league sets that followed do not. I love the '91 Line Drive set, but give me all of those minor league cards from 1977-81. 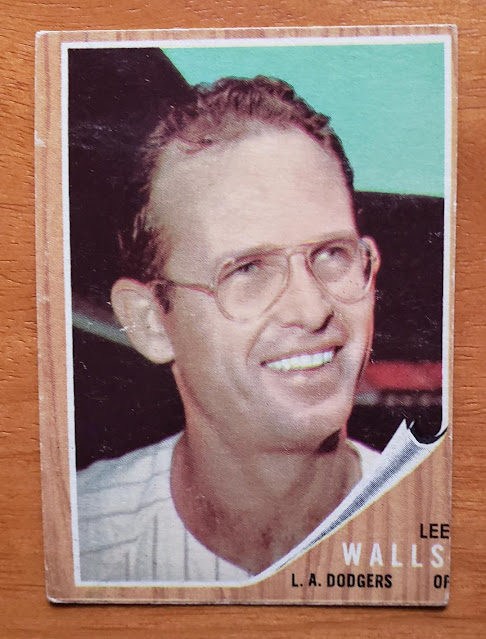 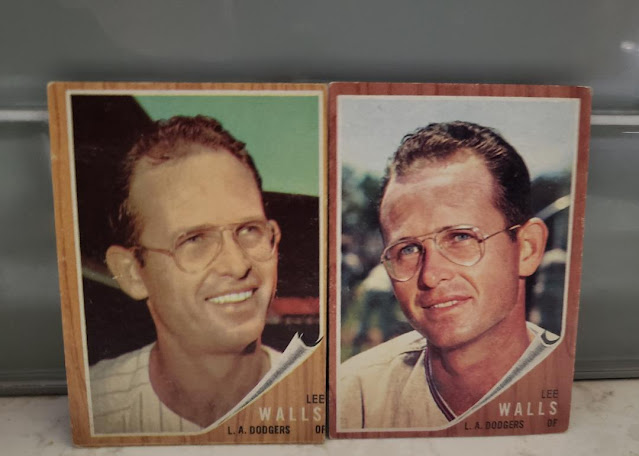 You can see the green tint a bit better on the card on the left. And, oh yes, they are different photos!
I knew about the green tints but I always thought the photos were the same, like the Gene Conley. Turns out there are differences on just about all the variations from out-and-out new photos like Walls (and the Wally Moons I have, which I had no idea one was a green tint) to slight cropping differences.
Boy do I feel silly, but at least I found out in the process that some veteran collectors didn't even know about the green tints!
All right, that was a lot of fun to go through, and, even better, I cleared out my card desk a little bit. I'm days away from sending out my last two giveaway packages, and I am so looking forward to a little more order in my card room -- it's been cards everywhere for the last couple of months.
It'll be an opportunity to send out some more trade packages, too, which I've been slacking on.
Many thanks on all the cards and all the folks who continue to transact with me!

Johnnys Trading Spot said…
I knew about the green tints, but I didn't know some of the photos were different. I may have to make an effort to obtain my Braves.
July 5, 2022 at 8:58 PM

Nick said…
I have a bunch of PWEs/smaller packages that I also need to come up with some semblance of a post for on my blog. Not that I don't enjoy writing those kinds of posts, but I have a hard time tying them all together. Love that Ron Washington - I bought a couple Cramer minor leaguers (including Rick Sutcliffe!) from Shane in that same sale.
July 5, 2022 at 9:09 PM

Old Cards said…
62 Topps - Duplicate cards of the same player, different poses, green tint and no tint. What a great time when cards didn't have to be logical or make sense!
July 5, 2022 at 10:13 PM

Fuji said…
I vaguely know about the green tint variations... but the different photos is completely new to me. I wonder how many collectors have gone out of their way to build a complete master set of these.
July 6, 2022 at 12:55 AM

Bo said…
Those Marlins cards came from me. I picked out two originally, then realized I had all three sitting there and had to include them as a group.

Never seen that Branch Rickey card with the Continental Baseball League sign - love it!
July 6, 2022 at 9:48 AM

Nick Vossbrink said…
Yeah I'm glad that none of the Giants green tints are photo changes (let alone superior photos like the Moon) since I really hate how badly the greens are printed.
July 7, 2022 at 12:17 AM

Brett Alan said…
When you did the post a couple weeks ago about the "A Future With The Dodgers" publication, I shared the link with the uniform expert Paul Lukas, who I thought would enjoy it. Indeed he did, and he featured it as part of his daily post on his site today with a recommendation: https://uni-watch.com/2022/07/07/devils-unveil-new-40th-anniversary-logo/ It's the third item down.
July 7, 2022 at 1:37 PM

Jon said…
That Ernie Lombardi is my favorite card from the Cramer set, and that's saying something because that set has a lot of great photos in it.
July 12, 2022 at 7:36 PM