Congratulations! You have too many cards 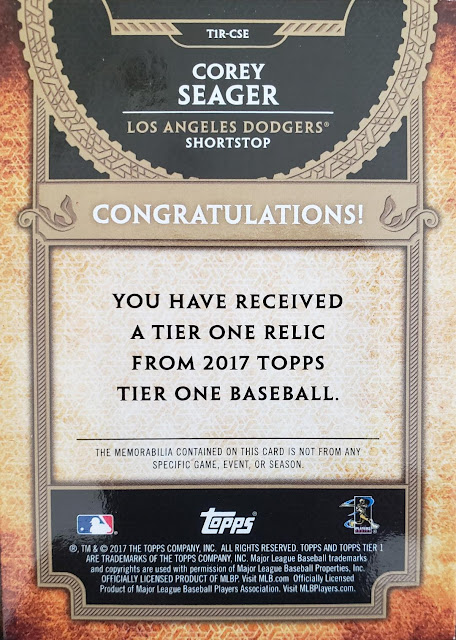 For years, decades upon decades really, I had no idea how many Dodgers cards I had.
Until maybe 10 years ago, I couldn't be bothered with totaling them up. But then I started the process and a couple of years ago I arrived at a total and have been watching it grow ever since.
So I've known I've been coming up on a team-collecting milestone for quite awhile. I wrote about it in that Beckett magazine article about my pursuit of as many Dodgers cards as I can:

I wrote that last fall, knowing the day would be coming.
It arrived last week.
I received a power-packed envelope from reader Simpson. He was one of the winners in the 5,000-post/5,000-card giveaway. I don't expect anything back from anyone from this giveaway, but the cards sure were pretty. And they got me to that milestone!
Let's count them in order of how I pulled them out of the envelope: 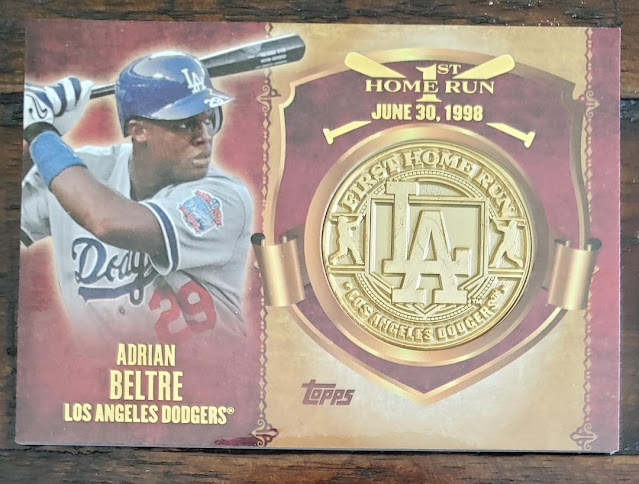 24,998
This is one of the medallion things from 2015 when Topps was throwing the "first home run" theme at us. It's super shiny and thick and it was very nice at the time to see Beltre in a Dodgers uniform again, instead of all those Texas Rangers cards. 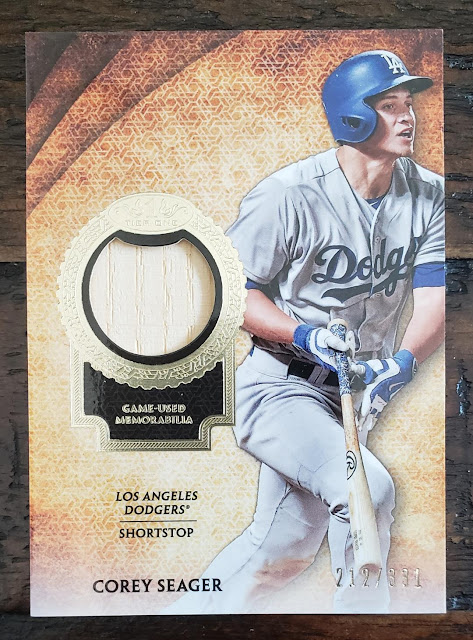 24, 999
Speaking of Dodgers Who Became Rangers, another super-thick hunk of cardboard of World Series MVP Corey Seager. I think this card gives me a trifecta for Seager -- remember those, rookie card, autograph card, relic card? 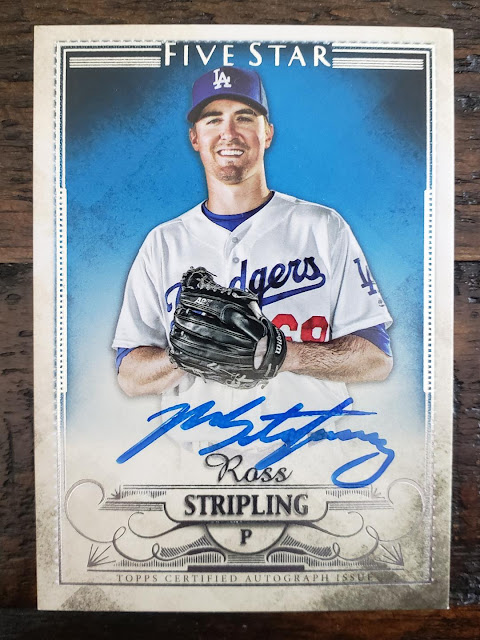 25,000!!!!!!!!!
I couldn't have asked for a fancier card for the super-round number. Sure, Stripling is long gone from the Dodgers and maybe they still could've used him, but nobody is raining on my milestone!! I HAS 25,000 Dodgers cards!
Let's keep counting. 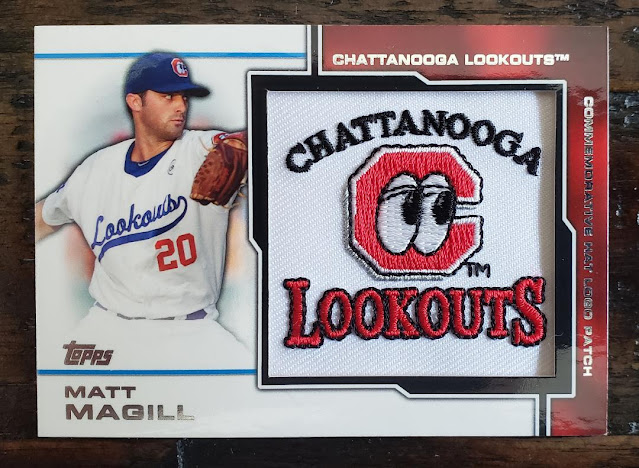 OK, a card like this always throws a wrench into things.
I do store cards of Dodgers minor leaguers with my other Dodgers cards. But I don't count them toward the total of Dodgers. Fun little card though. 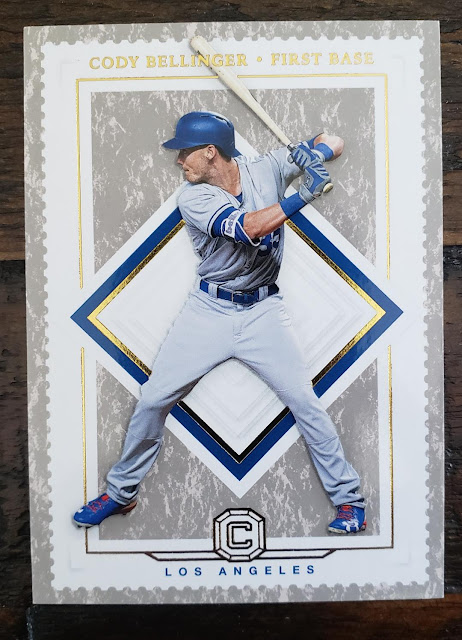 25,001
The only active Dodger in the group. This is numbered but that is not a relic behind Bellinger as I originally thought. It's just quite thick like about every card Simpson sent. 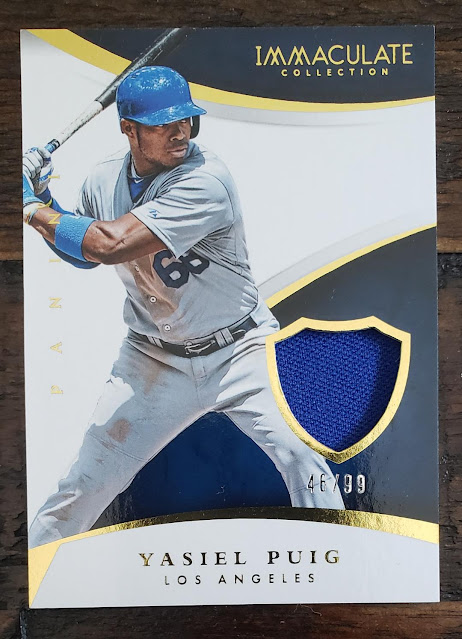 25,002
Staying with fancy Panini stuff. I think this is the first color swatch for a Puig card that I own. The blue is darker in hand, like its from a T-shirt. 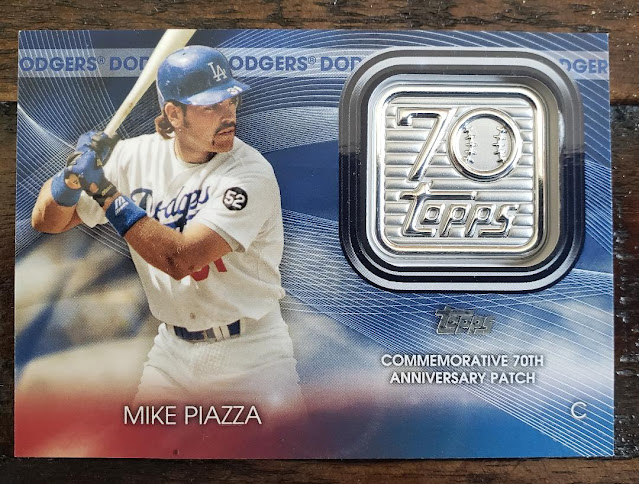 25,003
Ha, I just posted about these. I think I'm seriously going to complete this team set, even though it's ridiculous Topps is calling these patches.
If you visit my sidebar regularly, you know I have a ticker counting up the number of Dodger cards in my collection and it is officially up to date as of July 3, 2022. 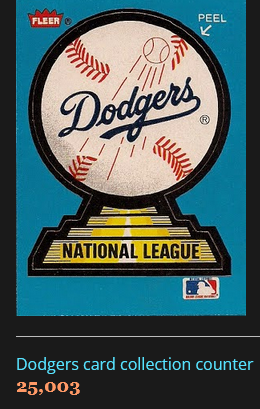 The cards that Simpson sent were quite fitting -- it's like he knew they were going to hit the milestone, most of them wished me congratulations right on the back! 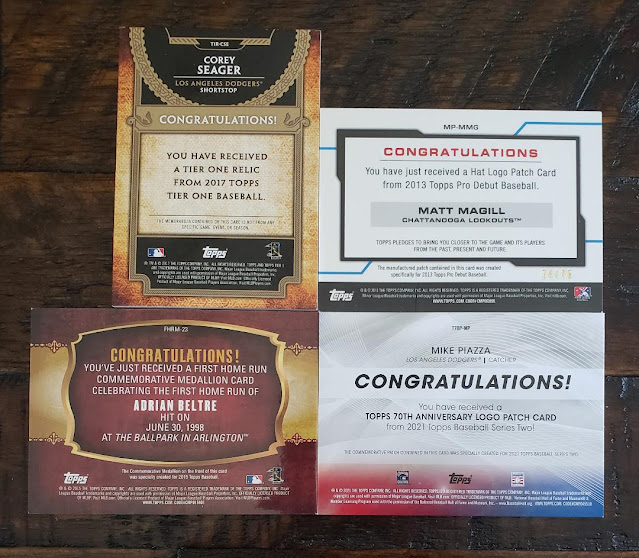 But I'm pretty sure the 25,000 total that I arrived at is not accurate. Who knows what the total really is. In fact, Trading Card Database says this little celebration is a little tardy.
According to TCDB, I surpassed 25,000 probably a couple of weeks ago and the total actually is 25,032 Dodger cards.
Hmmm.
At any rate, I have too many cards.

Johnnys Trading Spot said…
CONGRATS ON THE MILESTONE. THAT SURE WAS A SUPER SWEET PACKAGE. I LOVE THE HIGH END STUFF. I THINK THAT HR MEDALLION IS A GOLD PARALLEL.
July 3, 2022 at 9:28 PM

BSEBALLCOMMISH75 said…
Mr. Owl sir I hear that you are looking for me please check your email I sent you an email from my email address where you can reach me at congratulations on your 25,000+ Dodgers collection be sure to check the spam folder as well & tell Mrs Owl that you plan to get another 25,000 Dodgers before you turn 90

Nick said…
I can't even imagine what having 25,000 different cards of a single team looks like - definitely a testament to the longevity & general joy of your collection! Congrats!
July 4, 2022 at 5:13 PM

simpson said…
congrats on the awesome milestone, and I swear I had no idea when I sent them over! glad you enjoyed them and here's to the next 25k!
July 4, 2022 at 7:42 PM

Jafronius said…
Congrats on 25K! Much better that it was the Stripling than one of those Panini as the milestone card.
July 5, 2022 at 2:04 PM