The worst of the 'Future Stars' 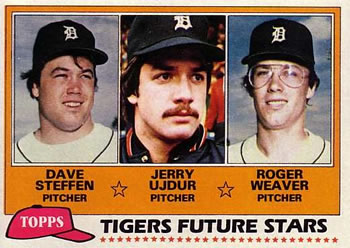 Here at Night Owl Cards, sometimes we take requests.
We're particular, of course. We don't respond to requests that are dumb, don't make sense or are plain annoying. And we're less likely to answer requests that take way too much work, usually responding with "why don't you do it yourself on your own blog?"
But, when the research is already done, and I haven't thrown out the paperwork yet, and it's sitting RIGHT THERE, then, yeah, I'll take your request.
After last night's post (corrections and updates all made), people wondered what are the worst of the Future Stars/Rookie Stars/Top Prospects cards? Also, which cards featured the "worst of the best," the highest lowest WAR, meaning what card displayed three or four players (I'm leaving out the two-player cards) who were all successful major leaguers, and which had the lowest WAR of them all?
I have all that information right here. It simply took a few minutes this morning when I couldn't sleep to compile.
I'll start with the worst of the best and then get to the absolute worst -- i.e., the fun stuff -- after that.
WORST OF THE BEST
There aren't a lot of prospect cards that showcase three or four players who all went on to notable major league careers. There are actually just three prospect cards that stand out above the rest. One kicked off yesterday's post. Another was guessed at in the comments yesterday. The other is also very familiar to vintage collectors. Here are the three: 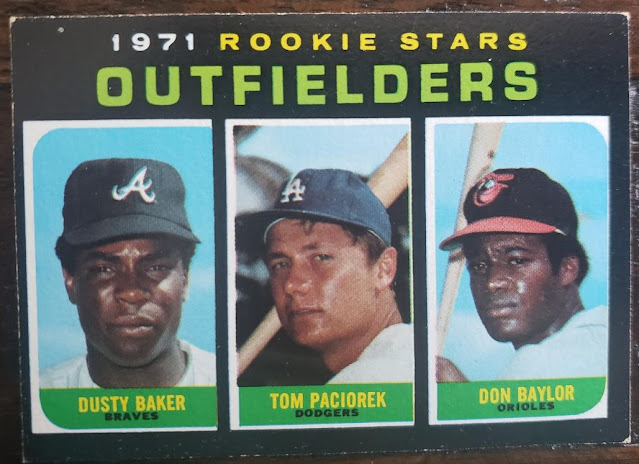 3. Dusty Baker/Tom Paciorek/Don Baylor, 1971 Topps
The low man on the totem pole on this card, which finished just out of the top 10 in collective WAR in the three-player card category, is Tom Paciorek. He produced a career WAR of 7.5, which pales in comparison to Baker and Baylor but is still pretty good for a prospect and is the third best of all players in his position. 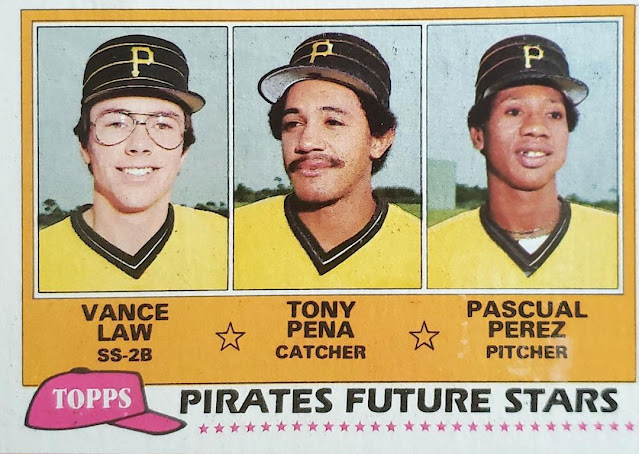 2. Vance Law/Tony Pena/Pascual Perez, 1981 Topps
This card, mentioned at the start of yesterday's post and 21st overall among the three-player prospect cards, features Vance Law as the "low man" but with a WAR of 10.6. There are only two multi-player prospect cards (again, excluding the two-player cards) with the lowest-rung player owning a double-digit career WAR. 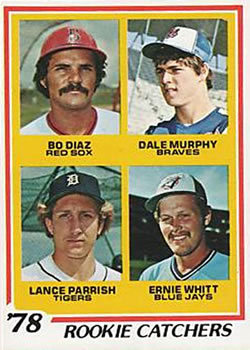 1. Bo Diaz/Dale Murphy/Lance Parrish/Ernie Whitt, 1978 Topps
I'm sure a number of readers guessed this for the top. It's quite the rarity, especially since all these guys are catchers in the '70s, during a time when catchers batted .220 and nobody flinched. But on this card, here is each player's career WAR:
Bo Diaz - 11.5
Dale Murphy - 46.5
Lance Parrish - 39.5
Ernie Whitt - 18.3
Diaz is the low guy on this card but he would be the high guy on plenty of other past prospect cards, and that makes this the best collective future stars card.
OK, enough of that. Let's get to the dismal.
THE WORST OF THE FUTURE STARS
One thing about this.
The worst multi-player prospect cards feature players who never made the majors. But I don't know how to quantify those when there is no major league WAR to calculate. So I am excluding them, even though you could justifiably argue they're definitely the worst.
Especially this card: 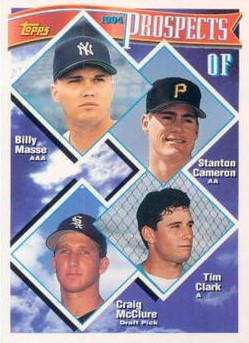 None of these guys made the major leagues. This is the only card I could find (again, there are plenty of two-player cards where nobody made the majors) in which all three or four (or five) players did not make the majors.
The 1981 Tigers prospect card at the top of the post, and mentioned in the comments yesterday, is definitely in the worst category. But one of the players, Dave Steffen, did not make the majors so I can't really rank it (the two other guys come to a collective minus 1.1 WAR).
So let's move on to the worst 10 all-time that I can rank. Here are the worst of those prospects who did see major league time: 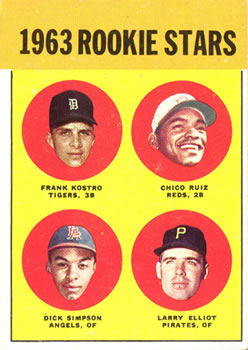 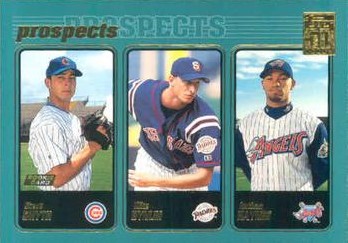 9. Steve Smyth/Mike Bynum/Nathan Haynes, 2001 Topps (-3.1 WAR)
Baseball-reference claims all three of these guys made the major leagues. I'll take its word for it. 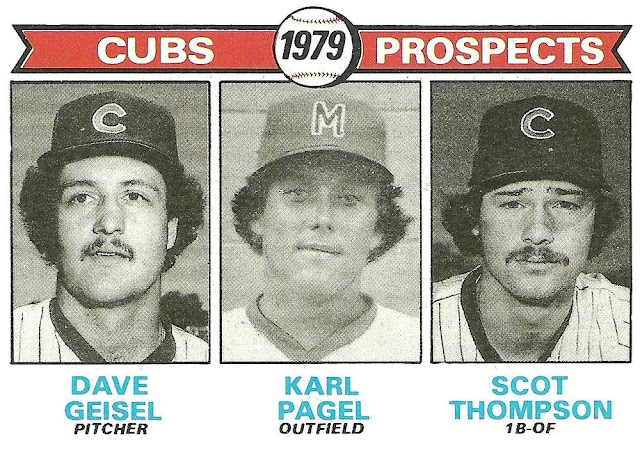 8. Dave Geisel/Karl Pagel/Scot Thompson, 1979 Topps (-3.1 WAR)
During my initial research, I was surprised when coming across Scot Thompson's career WAR. It is minus 5.7, that is really low, the lowest of any of the prospects in the 1979 set that made the majors. And he appeared on quite a few of his own cards. 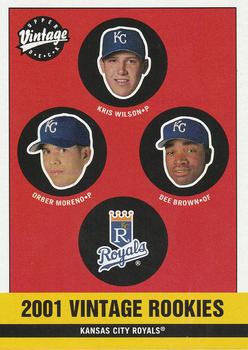 7. Kris Wilson/Orber Moreno/Dee Brown, 2001 Upper Deck Vintage (-3.2 WAR)
Have you ever asked yourself which player has appeared on the most multi-player rookie cards? The answer to that has to be Dee Brown, who is on like five or six of them. Of course, this is during an era with competing card companies, when everyone was doing the retro thing, too. 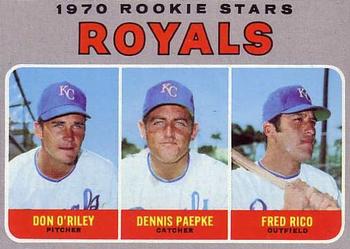 6. Don O'Riley/Dennis Paepke/Fred Rico, 1970 Topps (-3.3 WAR)
I forgot at the beginning of this post to tell Royals fans to maybe skip reading this one. They are all over this bottom 10 and we're not done with them either. 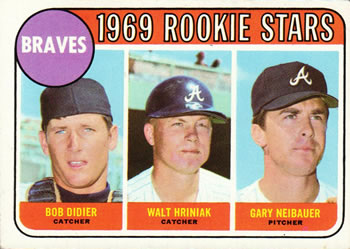 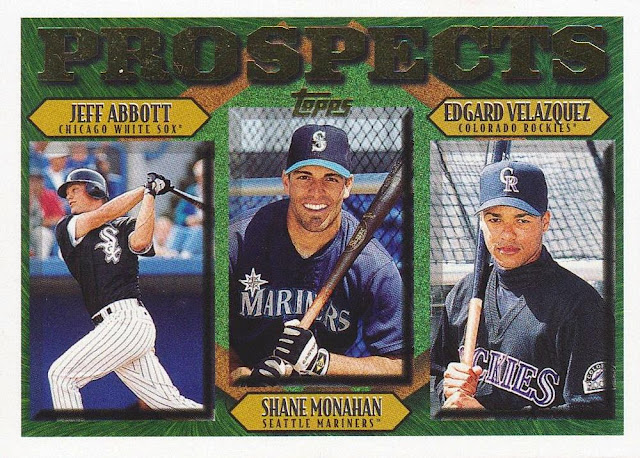 4. Jeff Abbott/Shane Monahan/Edgard Velazquez, 1997 Topps (-3.7 WAR)
Edgard Velazquez later became Edgard Clemente on his baseball cards. None of these guys lasted more than four years in the majors and since almost the entirety of their careers were in the late '90s, they don't register with me at all. 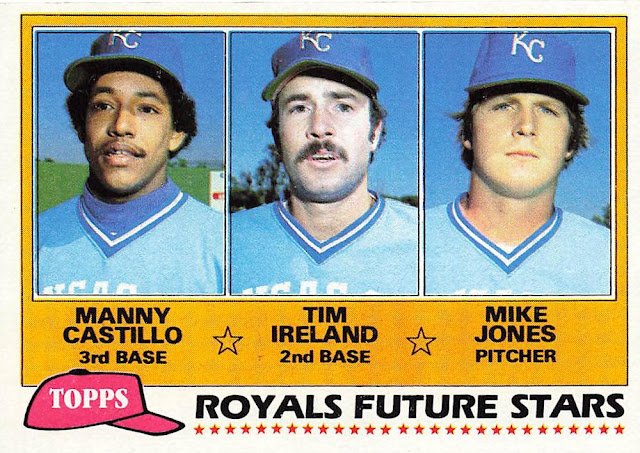 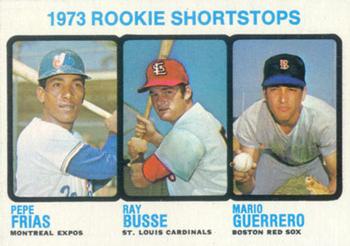 2. Pepe Frias/Ray Busse/Mario Guerrero, 1973 Topps (-5.7 WAR)
The '70s liked their shortstops swift of glove and ill-equipped at the plate (and with crudely drawn team logos). This status does not surprise 9-year-old me at all who looked at the stats on the back of Pepe Frias' 1975 Topps card and wondered why he had a baseball card. 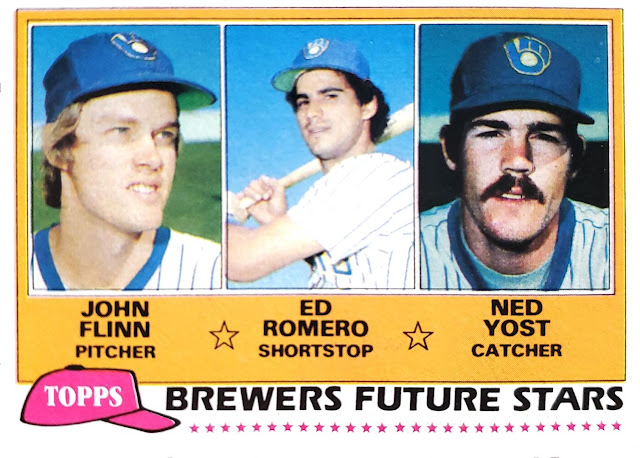 1. John Flinn/Ed Romero/Ned Yost, 1981 Topps (-10.0 WAR)
Negative 10.0! Yikes!
Here are the individual numbers:
Flinn: (-1.1)
Romero: (-5.2)
Yost (-3.7)
This card came out in a year the Brewers made the playoffs and a year before they made the World Series. Although I think we know why they fell off as the '80s went on.
Yost is known more now as a manager, particularly the manager of the 2015 World Champion Royals.
There you go, Royals fans, something good out of this post.
OK, I don't want to leave without showing this card: 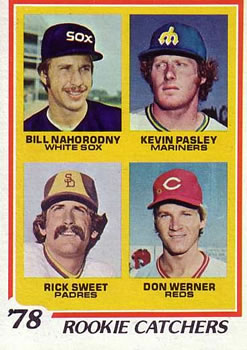 With the exception of the 1963 Topps card that ranked at No. 10, this is the four-player prospect card with the worst total WAR at minus 2.7. It's interested me for quite awhile, one for Kevin Pasley's second straight rookie prospects appearance, first as a Dodger in 1977 and then as a Mariner here. Also, three of the four players feature airbrushed hats. The other guy was supposed to replace Johnny Bench someday.
OK, now I think I can feed all my papers to the shredder.
I assure you my next post will be much less research-intensive.

On a different note, I was always surprised Topps didn’t utilize 4 player cards for offensive and defensive players during the 1970’s and 1980’s to make their NFL sets deeper for each team. They only time they used them was for team leader cards.
November 24, 2021 at 9:21 PM

Bill@Bravestarr said…
Great job again! I was surprised at the Romero/Yost numbers but then not. The Scot Thompson number is crazy because he played through like ‘85 or something.
November 24, 2021 at 9:30 PM

bryan was here said…
Very interesting post tonight. I remember Ed Romero sticking around the majors for quite a while, at least into the early '90s. And Jerry Ujdur was with the Indians for a brief moment. I remember they brought him into a game and he proceeded to pitch batting practice. Rough to watch, he was soon dispatched back to Triple A and promptly disappeared.
November 24, 2021 at 11:47 PM

night owl said…
No, that was the previous post: https://nightowlcards.blogspot.com/2021/11/the-best-of-future-stars.html

I probably didn't explain the "best of the worst" part well but it's the card in which the player with the lowest WAR has a WAR score that's higher than the lowest WAR guy on any other card. And that would be the '78 Diaz-Murphy-Parrish-Whitt card because of Diaz's WAR.
November 25, 2021 at 2:41 PM

Bo said…
Thanks for taking my request! This is cool stuff, hope you scan those papers before shredding them.

In a way you have to be pretty "good" to accumulate a large negative WAR, because you have to play a lot of games to push the number far enough away from zero.
November 25, 2021 at 4:19 PM

steelehere said…
I omitted it from my earlier comment, Happy Thanksgiving!
November 25, 2021 at 8:21 PM

Fuji said…
Glad you shared this information. I don't think I was familiar with the Baker/Paciorek/Baylor card until now. Hopefully I can find a copy at a reasonable price one day. Until, I'll settle for tracking down that very unique 1994 Topps OF Prospects card.
November 26, 2021 at 9:32 AM

Nick said…
Thank you for doing this post! I suppose I'm a bit strange, in that I generally prefer "Worst Of" stuff to "Best Of." A cumulative -10 WAR is downright scary - way higher than I thought the "best of the worst" card would be.
November 26, 2021 at 7:59 PM

Nick Vossbrink said…
Love it. The perfect companion piece to the other post and just as interesting.
December 2, 2021 at 9:37 AM