November 26, 2021
I'm a pretty advanced collector, I would say, but I just can't get out from underneath the junk wax era.
It's been 30 years since then and I'm still coming across junk wax cards that I need. 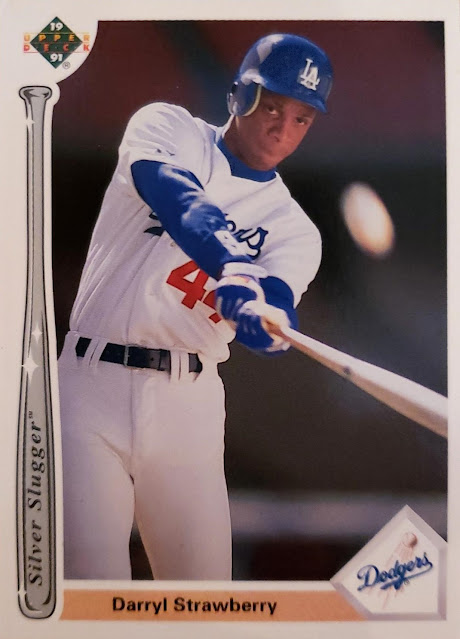 This is from the 18-card Upper Deck Silver Sluggers set issued in 1991. TCDB says this set was issued one card per jumbo pack. I assume that means you could find them only in hobby shops? As a mere retail collector in '91, I had no idea what a jumbo pack was.
But now, thanks to reader Mike, who sent along a nice selection of needs, I have completed the Dodgers portion of the Silver Sluggers set, a two whole cards, 30 years after it was issued during a period known for how abundant cards were ... and still are.
But some were sneakily elusive.
I looked quickly through my wants from this time period to see what else I need from years of easily attainable cards. This is a brief rundown of brands that are not complete in my collection as far as Dodgers:
Classic, Dodgers Police Set ('88 mostly), Nestle's, O-Pee-Chee, Sportflics, Donruss Baseball's Best, Sports Illustrated For Kids, Starting Lineup, all those 1990 Target cards, Swell, Fleer Ultra Update, Bicycle Playing Cards, Leaf (parallels), Topps (parallels), Fleer (inserts), Score (inserts), Topps Magazine, Finest, Ted Williams Company (inserts).
You can see when the inserts and parallels started to ramp up around 1992, 1993, that's when it got bleak for this set collector and my enthusiasm started to run out. 1994 was around the corner and I moved on for something less frustrating.
When I look at all I need from that period now, I think "how?" I've been accumulating at a rate that few collectors match in the last dozen years and still I've got a lot of work to do. Perhaps I need to spend a few months focusing on just those junk wax needs (well, some of them will take more than a few months). But that probaby won't happen because I love '70s Kellogg's and Hostess and vintage so much more than junk wax.
So, I'll depend mostly on good folks like Mike for those welcome junk wax finds. 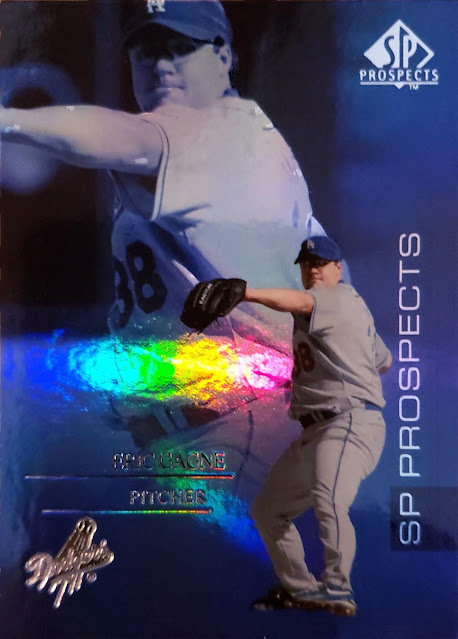 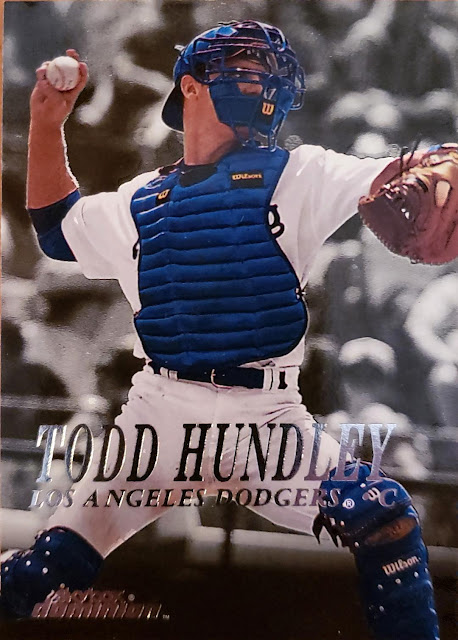 Here are a couple of more modern needs. I don't get all cranky when these sets are all unfinished because 1) these sets don't mean much to me and 2) there are eleventy billion of them. 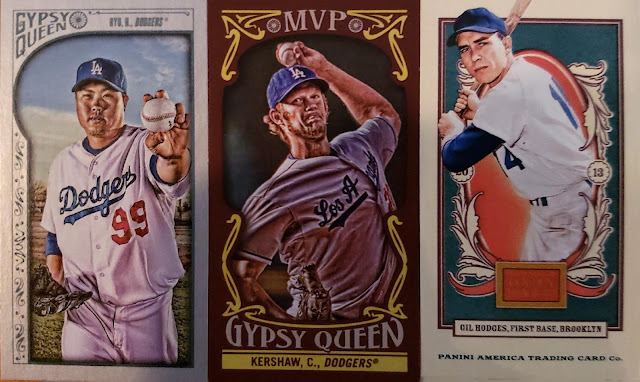 Wooo! Mike found some mini needs! This is the good omen that's going to get Gil Hodges in the Hall in a few weeks, I'm calling it now. 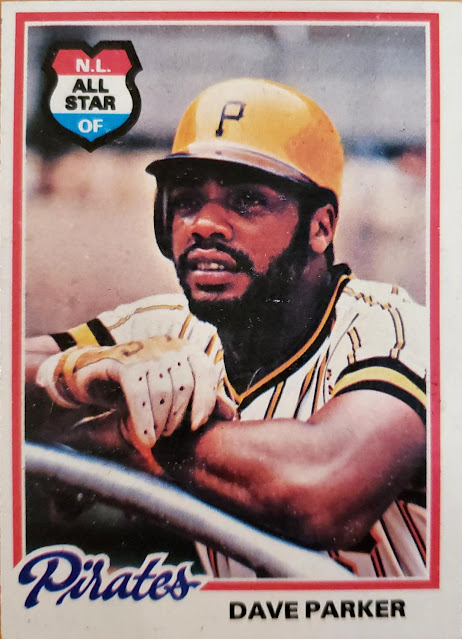 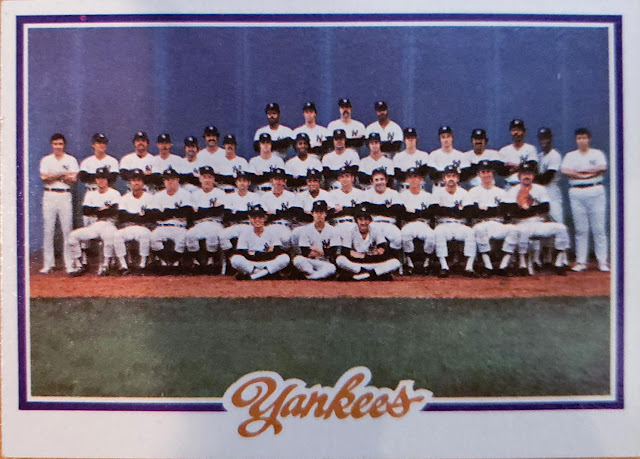 Mike also set a couple of 1978 Topps upgrades! (Maybe focus on junk wax instead of all the upgrades, night owl?)
Two things about the Yankees team card: One, why did Catfish Hunter bring his glove with him when everyone else knew to leave theirs in the dugout?
Secondly, this shot always looked antiseptic to me, like it was taken in a vacuum.
But that's because Topps cropped out the good bits. 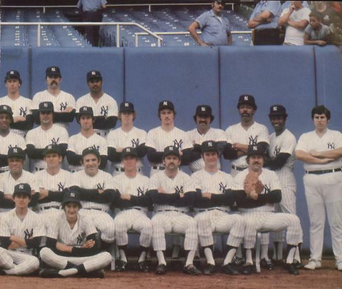 Come to think of it, I think Topps airbrushed the wall higher to erase the onlookers! No wonder the card shot looked weird to me.
Anyway, many thanks to Mike for getting me one card closer to wrapping up all those pesky junk wax Dodgers.
Maybe I'll have them all finished in another 30 years.

Nick said…
The amount of late '90s-early 2000s stuff I still need is even scarier than all the "junk wax" floating out there I don't have. Although the junk wax is a bit more painful because it feels like I *should* have found those cards years ago now.
November 26, 2021 at 8:04 PM

Swing And A Pop-up said…
With all the cards I've accumulated over the years it is embarrassing that I haven't completed basic junk wax sets like 1988 Score and 1989 Donruss.
November 26, 2021 at 9:10 PM

night owl said…
Public service announcement: I have turned off blog comments temporarily as some spammer was commenting on every post, and in the process of removing them (as well as removing all the email notifications), I accidentally deleted the previous comment on this post. I'll turn them back on in a day or two.
November 27, 2021 at 12:34 AM

Bulldog said…
Did not know about the Silver Slugger cards. Good to know. Really good photo on the Hundley card and I like that Kershaw Gypsy Queen card.
November 28, 2021 at 10:29 AM

Nick Vossbrink said…
As someone who was collecting big time in those junk wax years, I kind of love how I can still come across cards I've never heard of.
November 28, 2021 at 1:22 PM

Laurens said…
I left the comment about finding Upper Deck jumbo packs at my local pharmacy store, so from my experience they were not only a hobby only release.
November 29, 2021 at 1:12 AM

Jon said…
I'm always finding that I still need cards from this era, and it doesn't bother me in the least. Given how much a lot of stuff has gone up in recent years, it's kind of nice to know that there's still plenty of cards that can be had on the cheap.
November 29, 2021 at 8:15 AM