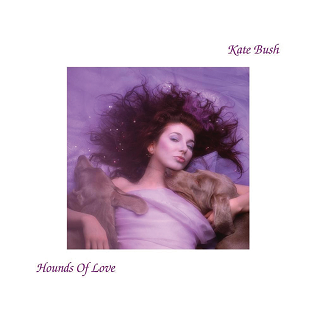 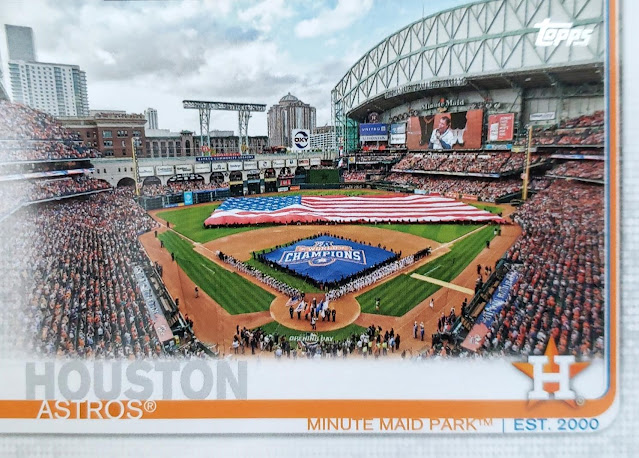 Track 1: Running Up That Hill
The one American "hit" off of the album, I believe it went to No. 30 on the charts, which irked me back in 1985. The electronic drums propel this song almost to its conclusion. It's about Bush's wish that the sexes could take each other's places in order to understand each other. That's impossible, of course, therefore, Bush's line about "a deal with God," which was the original title for the song.
I like to think that if players could wear headphones in the field one of them could have "Running Up That Hill" playing as they ran up Tal's Hill in Houston, prior to its removal in 2016 (I know this card is from 2019, that's as close as I could get). 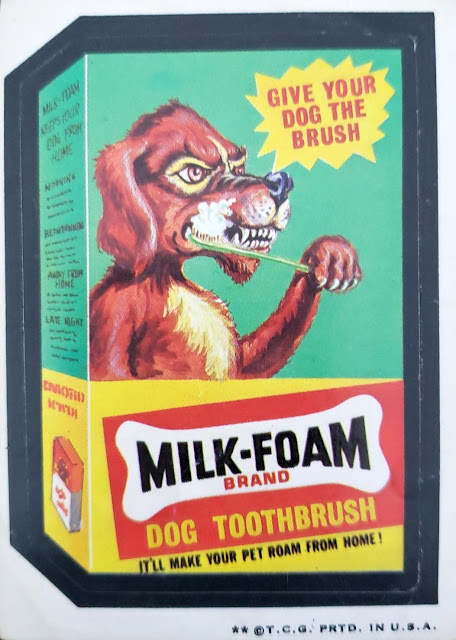 Track 2: Hounds Of Love
A terrific visual about being hounded by your fears, whether that's fear of commitment or whatever, compared to being hunted in the woods by a pack of dogs. "Take my shoes off, and throw them in the lake."
There are some great scary hounds cards in Magic: The Gathering, but since I don't collect that stuff, I am posting a foaming-at-the-mouth Wacky Packages hound. 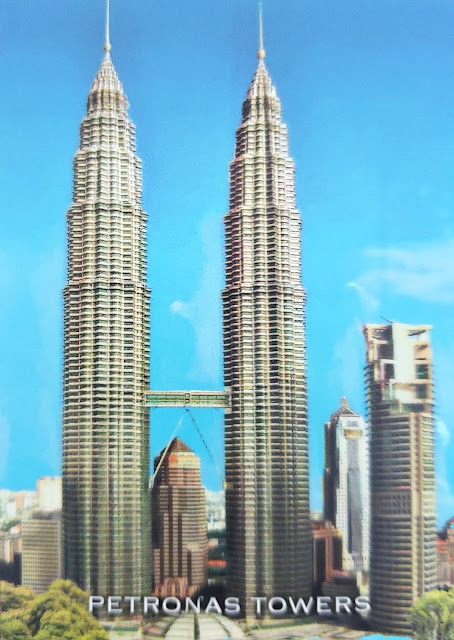 Track 3: The Big Sky
This song sounds so huge for its theme, which is about the simple enjoyment you found as kid by looking up at the sky and watching the clouds. It's easy to forget that amazement when we are adults but I think it doesn't matter what age you are, if you were standing on the ground looking up at the Petronas Towers in Malaysia on a cloudless day, you'd be a kid again. 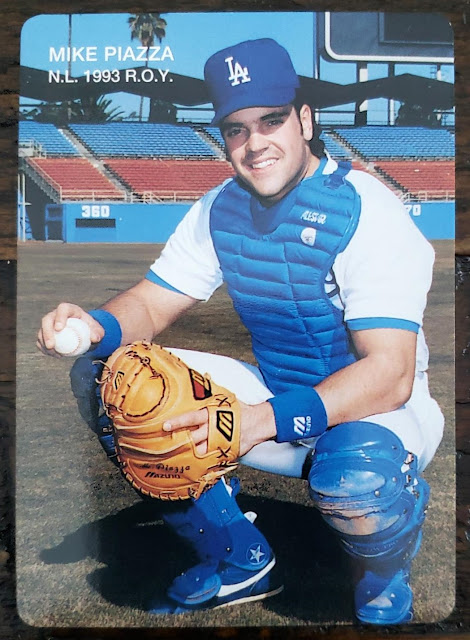 Track 4: Mother Stands For Comfort
Kate Bush isn't going to go where you think she should. This is a song sung from the perspective of a murderer. The murderer knows that his mother will always protect him and look out for him no matter what he's done.
But for simpler comfort, I recommend searching out a Mother's Cookie, both the cookie and the card. 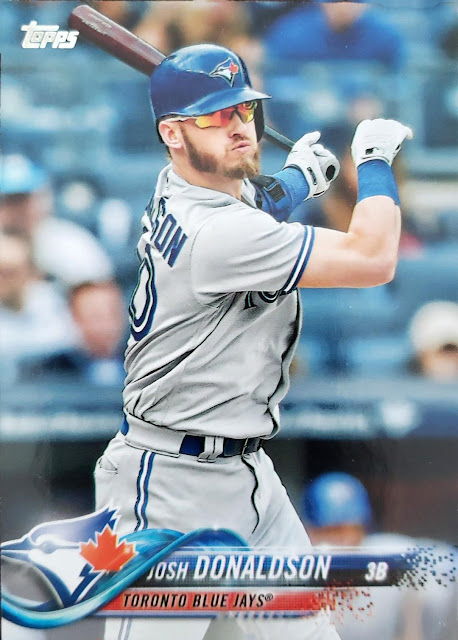 Track 5: Cloudbusting
A song written about philosopher and psychologist Wilhelm Reich and his son, Peter, from Peter's perspective in the memoir "A Book Of Dreams". Peter described his memories of him and his father on the family farm, "cloudbusting," which would involve pointing a machine, that his father had made, at the sky to make it rain. The song also refers to Reich's arrest and Peter's feeling of helplessness after his dad was in jail. Helplessness is a big theme on this album, which is why 2019 me related so much to it. I love Kate's voice on this: "I just know that something good is going to happen."
This was one of the easiest cards to find in the whole exercise, just had to find someone nicknamed, "Bringer Of Rain".
"The Ninth Wave" begins 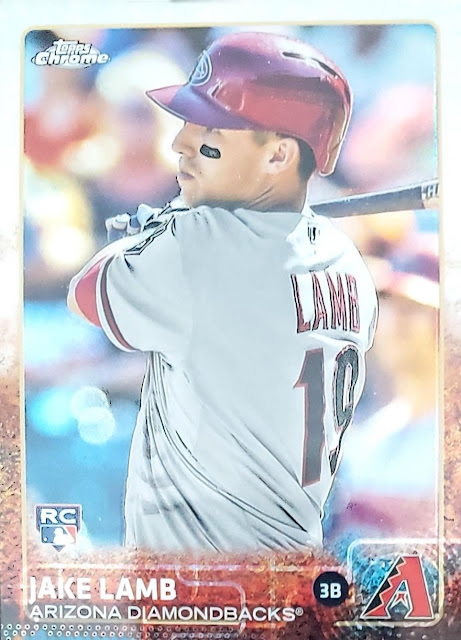 Track 6: And Dream Of Sheep
Another easy pick. Finally, Jake Lamb has a use for me.
The Ninth Wave is not only about a woman alone at sea, but alone at sea at night (the video for this song is Bush singing to the sky from a life raft in the darkened water). She's waiting for someone to rescue her but it's starting to look like it's not going to happen, and she's fighting sleep because she knows if she falls asleep, she'll drown.But she wants to sleep to get away from her problems. She does fall asleep, and then the next song begins.
I listened to this song over and over those nights at my mom and dad's house. 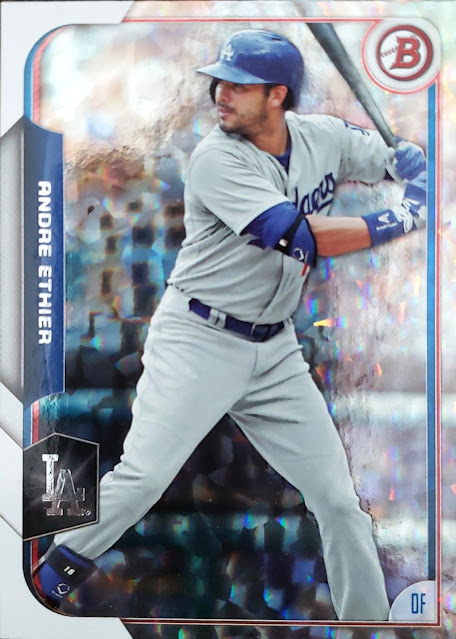 Track 7: Under Ice
So the woman has fallen asleep and now it's one nightmare after another, she's on a frozen lake and then she gets a glimpse of someone under the ice and then she realizes to her horror that it's her under the ice.
I looked closely at these Bowman Ice parallels to see if the image of the player is under "the ice." But no, they're superimposed on the ice effect. What a relief. 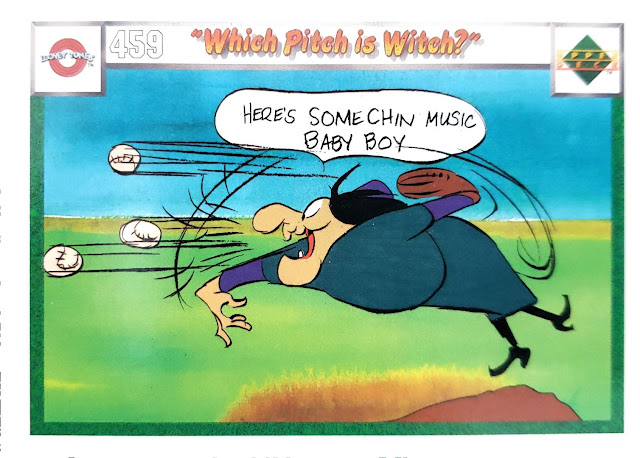 Track 8: Waking The Witch
The dream continues as all of these people from the character's past try to wake her up so she doesn't drown, her parents and her teacher, and then it morphs into a medieval witch trial in which Bush is lashing out against sexism and fear of women's power. "Confess to me, girl."
It was at the point of these last two songs that I decided in 1986 that Bush wasn't for me. They're not traditional songs, rather arty and progressive, with a bunch of frightening voices and strange sounds, and this song ends with a helicopter traveling overhead and someone yelling "Get Out Of the Water!". None of the Side 2 songs are accessible at first listen. I wasn't ready for all of that.
Anyway, I'm sure the first witch I knew was the one on Bugs Bunny cartoons. 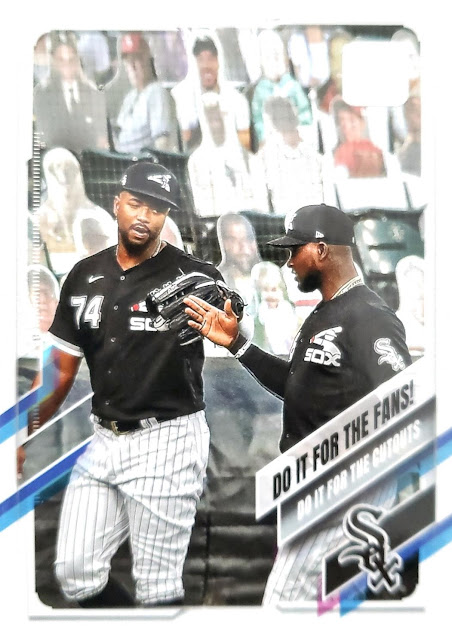 Track 9: Watching You Without Me
Kate Bush has said a lot of these songs are her own nightmares illustrated in music and this song refers to the character being able to see her loved ones worrying about her, waiting for her to come home, but her having no way to communicate with them.
Not really the same thing, but I thought of the cardboard cutouts in vogue during the 2020 baseball season and how it was images of specific people, "watching" the players, without the person pictured actually being there. "Watching You Without Me." 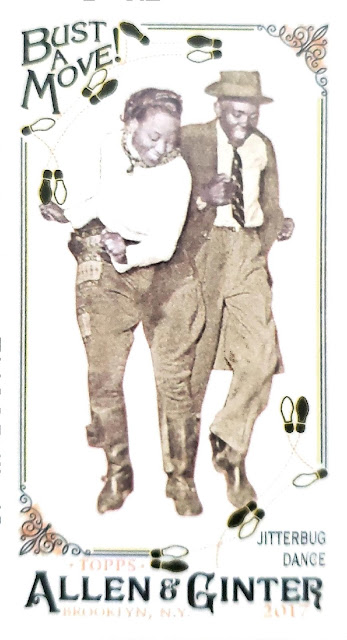 Track 10: Jig Of Life
Allen & Ginter is so good for these "Match the Song Title" projects.
Bush was highly influenced by her surroundings in Ireland with this song, there are Irish musicians on it. She's said the dream continues with this song in which the character's future self comes to her and tells her not to give up, because if she doesn't stay alive neither does her future self. 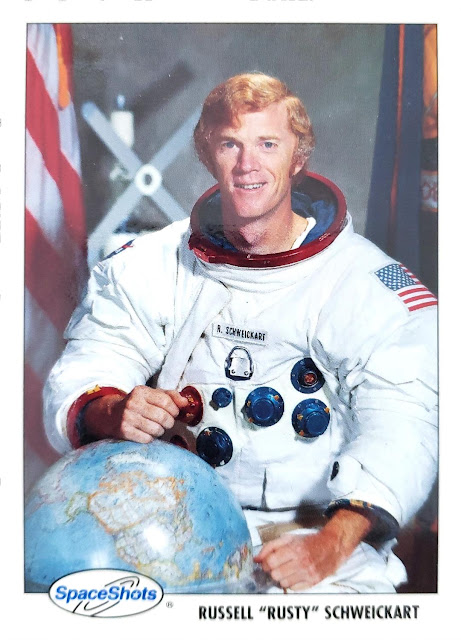 Track 11: Hello Earth
The song is kind of like the perspective astronauts have looking down at the earth, but Bush has twisted it into being able to look at the earth from the character's position in the water. 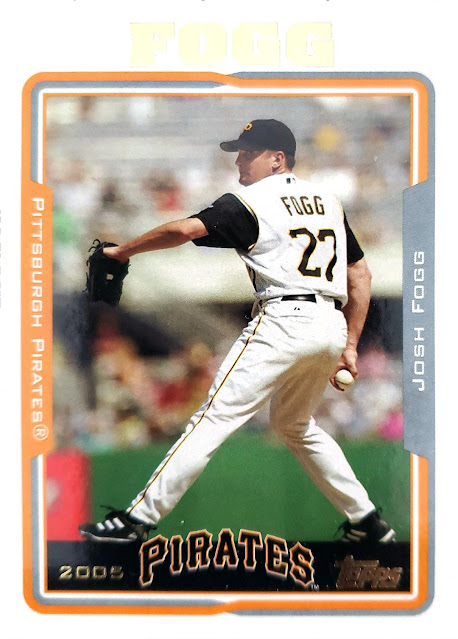 Track 12: The Morning Fog
The finale, the character has finally been rescued and she has new perspective on life and she's grateful.
Josh "Fog" Fogg is appropriate here. I was noticing when I selected this card that the border around it is orange, rather than the gold of the other Pirates cards in the set. 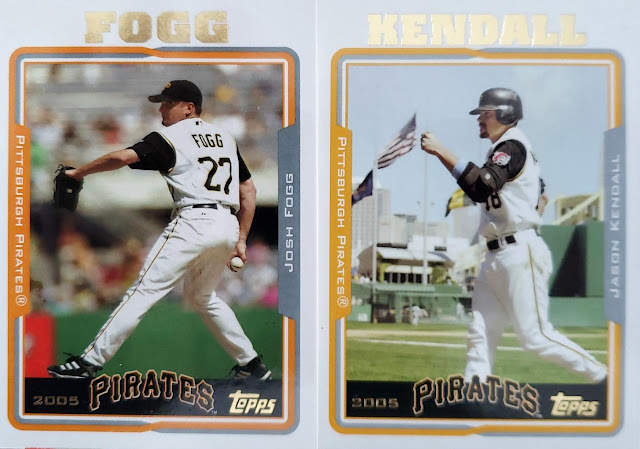 Hmmm.
And that's where the needle comes off the record.
Even after all these years of so many new musicians and genres since the mid-1980s, Kate Bush remains an acquired taste. Even her biggest fans would probably admit she's "weird" and certainly not conventional. But that's why we love her.
Kate Bush doesn't have many trading cards, you'd think given how popular she was in England that she would've shown up in the UK version of the 1991 MusiCards set. But I just purchased one of the few and I may post it sometime.
I haven't really moved past this album and a couple of her other ones, but I hope to, amid all of the other music I've discovered over recent years.
I'm just happy I was able to salvage that cassette tape that died in vain all those years ago. It still bothers me that I did that.

Dave L said…
I read 75% of your posts and I generally enjoy your take on collecting and your personal Dodger fandom. Todays post really hit home for the first time. I just lost my mom (at 94 years) and she was insistent on being cared for in her home right until the end. I am fortunate that my brother was incredibly supportive, and we were able to afford the round the clock care she required. Your story was heartbreaking and so relatable. I’m sorry for your moms loss and challenges it presented.

I am also grateful for your recognition of Hounds of Love, which has always been a favorite LP of mine. Your connection to your personal ordeal is very moving. Thank you for sharing.

Relating each track to a specific card is hilarious and (kind of) ridiculous, but very creative. I enjoyed it very much. Thanks. It’s got me thinking of a similar exercise with a record that’s dear to me…
Dave
November 29, 2021 at 8:33 PM

Brett Alan said…
I've never really gotten into Kate Bush, but I can certainly relate to your experiences--my mother passed away, as I've mentioned before, in 2015. Actually as I'm reading this my wife is taking her mother to a doctor's appointment--just a routine visit, no reason to think anything's wrong (knock on wood!), but it's a reminder of those feeling too. Thanks for this.
November 29, 2021 at 9:24 PM

bbcardz said…
The way you tie these concepts together (music, trading cards, family life & death) make for a very compelling post. This was deep, personal and very thought-provoking. I've always loved "Running Up That Hill" and "Don't Give Up" and yet I don't have any Kate Bush albums.
November 29, 2021 at 9:36 PM

CaptKirk42 said…
I love Kate Bush. I first heard of her when Eric Idle hosted Saturday Night Live in 1978 and had her as the musical guest. Back then the guest host picked or had a big influence on who the musical guest would be. Then I didn't hear much about her until a few years later when a high school acquaintance was big into her. Then a couple of years later I started getting more into her stuff and getting her albums. I remember when "Hounds of Love" came out and discovering it. It quickly became my favorite album of hers.
November 30, 2021 at 9:56 AM

Jon said…
I've heard a few of her albums over the years, but this isn't one of them. I guess it's time to give it a listen! I hate to say that this was a great post, given all the sadness and all, so I'll just say that it was extremely well written :)
December 3, 2021 at 8:21 AM

defgav said…
It may be recency bias, but this got my vote for post of the year over at N.Grande.

It's doubling down on the weird, but perhaps my favorite Kate Bush song is a very slowed-down mix of "Wuthering Heights". Good for late night listening when I don't feel like listening to real music but want to hear something. (YouTube link)
December 4, 2021 at 3:39 PM