Something about thoughts counting

May 07, 2021
The Dodgers stink you guys. They can't field. They can't run the bases. Their starters can pitch, but not well enough to compensate for the nothing offense and it doesn't matter anyway because they're only going to be removed so a bullpen full of people I don't know can blow the game to smithereens.
I know, I know. Your team has problems, too. And I can lean on last year's World Series title. But this is my blog and my team and my feelings. It's hard to watch them right now. Thank goodness I don't have the time lately to watch.
I need a baseball pick-me-up from my cards and fortunately folks are helping out.
I received a card and a letter the other day from a collector named Richard. He's emailed me before. I don't have a lot of blog interactions from collectors who are 20 years older than me, so it was nice to get a hand-written letter and some kind thoughts within:
"Thank you for your blog, it makes my day"
That's what it said. That's mighty nice. Richard collects stuff I don't expect people that age to collect like 2021 cards and chrome, fancy things. He also collects autographs and asked me to sign something for him.
Oh, and there was a card. 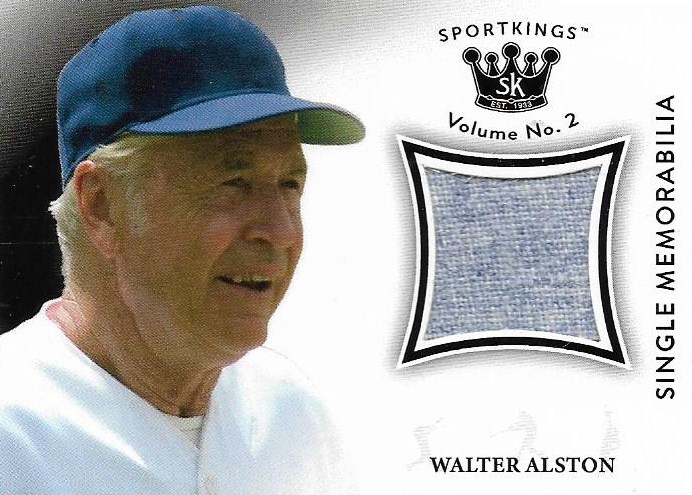 It's my first Walter Alston relic card.
Isn't that nifty. I don't deal with Sage cards at all -- unlicensed stuff you know -- but this is cool enough. Manager relics don't come around every day.
Rich also threw in a 2021 Dodger card that I needed. 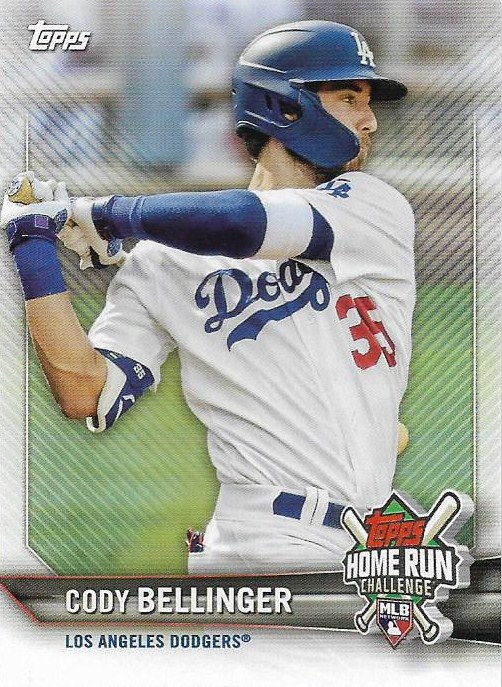 Oof. That's an unpleasant reminder.
These cards reward you if you correctly guess the date when the player featured will hit a home run this season. But Bellinger won't be hitting home runs for awhile because a clumsy A's pitcher ran into him while fielding a ball down the line the first week of the season. This is the second significant injury to a Dodger starter in a game against the A's in three years (Kendall Graveman broke Justin Turner's wrist with a pitch in 2018). Ban games against A's. Ban interleague play. 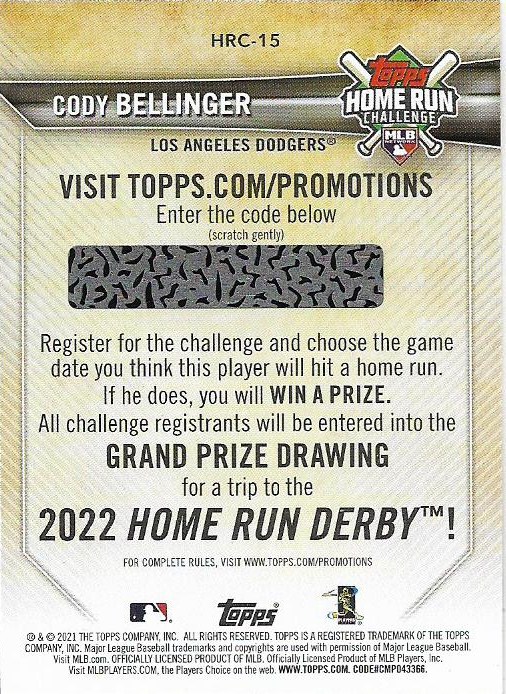 I'd say scratching off the code is pointless -- there's probably all April and May dates in there -- but it doesn't matter because I don't want any trip to the dumb home run derby anyway. I wouldn't be able to stay for the All-Star Game and what's more sad than going to the derby of fake home runs and then leaving before the game?
Stay snug in the pockets, coins, no scratching for you.
So, anyway, it's the thought that counts. It's nice to hear that your blog means something to people and then they throw in cards on top of that.
Still in my "the Dodgers stink" snit fit, I received another card just today. This arrived from Jeremy from Topps Cards That Never Were. It's a card I was interested in a few weeks ago and he remembered enough to send it along. 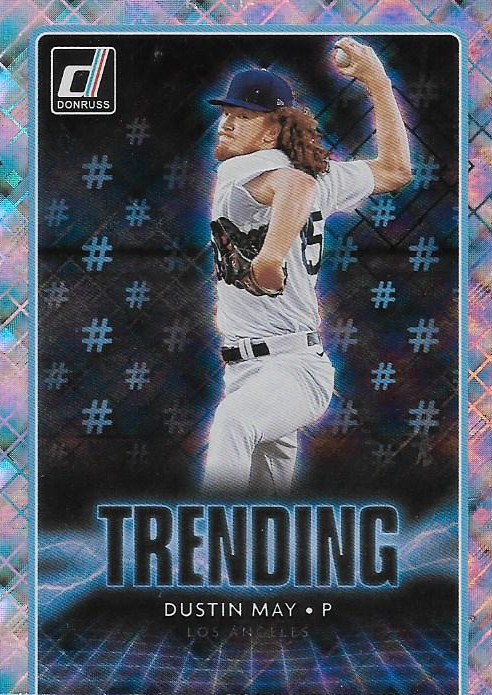 Ouch.
Dustin May is out for the season with TJ surgery.
But I still like the shininess, even if the floating hashtags are weird (I'm imaging collecting cards as a kid with TVs floating in the background behind the player).
The injuries to Dodgers players is probably the worst team news this season. It seems like more times than not the team that wins the World Series is able to avoid significant injuries.
I've said many times that I'm glad that I'm not a baseball fan who only roots for my team and nothing else. I'd be a basket case. A card collection adds depth to your fanhood, adds perspective and knowledge. And it also gives you a place to go when your team isn't doing so well.
It lets your thoughts move somewhere else instead of focusing on the issues with your team.
Because teams sucking is temporary. Cards are forever.

steelehere said…
Going to the 2022 Home Run Derby alone just might be worth it for you as it’s at Dodger Stadium. I’d imagine if you have one, that walking 9n the hallowed grounds of Chavez Ravine has to be very high up on your bucket list.
May 7, 2021 at 8:27 PM

Nick said…
Looking at my Cubs cards was a lot more fun than actually watching the Cubs for the first 15-20 games of the year there - I don't know that I'd ever seen a team hit so poorly for a prolonged period of time. It's gotten a bit better lately, but as you said, we're all allowed to complain about our favorite teams once in a while!
May 7, 2021 at 8:47 PM

Johnnys Trading Spot said…
Yes, we are entitled to a little team fussing. My Braves went from the bottom to the top and now sitting in the middle. Seems like this is going to feel like a really LONG year. Really cool for Richard to reach out like that.
May 7, 2021 at 8:59 PM

Fuji said…
I was kind of happy to see the Dodgers struggle... until the Giants passed them up and now I have to deal with all of my co-workers and friends who are Giants fans chirping about how great their team is. It's a long season and the cream always rises to the top. It'll be interesting to see which of our teams will be there or if the Giants will shock the baseball world and win the NL West.
May 8, 2021 at 8:28 AM

Peter K Steinberg said…
I wish young pitchers like May knew how to pitch and not just throw or "hurl". Might have prevented the need for TJ surgery. Oh well. Maybe he'll be the same guy in 2023.

Nick Vossbrink said…
Am enjoying the Giants doing well but they're kind of limping along on offense and have an awful bullpen as well so it's only a matter of time for things to catch up to them.

Can definitely say that baseball-wise it's always fun to see the big-budget teams struggle though. Yankees and Dodgers will figure things out sooner or later si we've got to get our enjoyment in while it lasts.
May 8, 2021 at 5:15 PM

Your first 3 sentences reminds me of this:

Jeremya1um said…
If I send you cards of the entire Yankees, Twins, and Padres rosters, will the whole injury thing work too? Asking for a friend.
May 10, 2021 at 12:07 PM