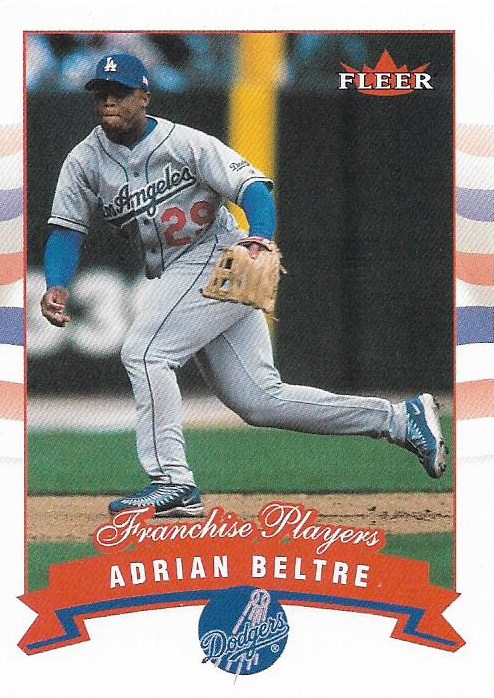 Twice within the last few days I have started on a post idea -- pulled cards, done some research -- before figuring out I had already written that post.
This is to be expected for someone who has been blogging about cards for more than a dozen years, at least five times a week. But it's getting more and more frustrating.
I'm not frustrated because it wastes time. I have the time to post because I make the time to post. It's frustrating because it's happening more often and I feel like the new ideas aren't as reachable as they have been in the past. Maybe I'm blogging too often. If I blogged less, I'd be able to create more thoughtful content and have more time to create posts like that.
Perhaps if I cut down to blogging four days a week, I could do that.
This is just a thought right now. I've prided myself on blogging as often as I can (because I need to write). And if there are people out there who read this with their morning coffee every day, well, I don't want to disappoint them.
But churning out posts at an assembly-line rate doesn't seem like a good idea anymore.
I don't know, just stuff that pops up in my head when I have to scrap two straight posts that I thought I had never written before. So leave your thoughts in the comments or don't -- yeah, yeah, I know, it's my blog.
While you're doing that, I'm going to finish showing off what I received from Nachos Grande's Breakers Club 2. I showed the 2021 Heritage cards yesterday. 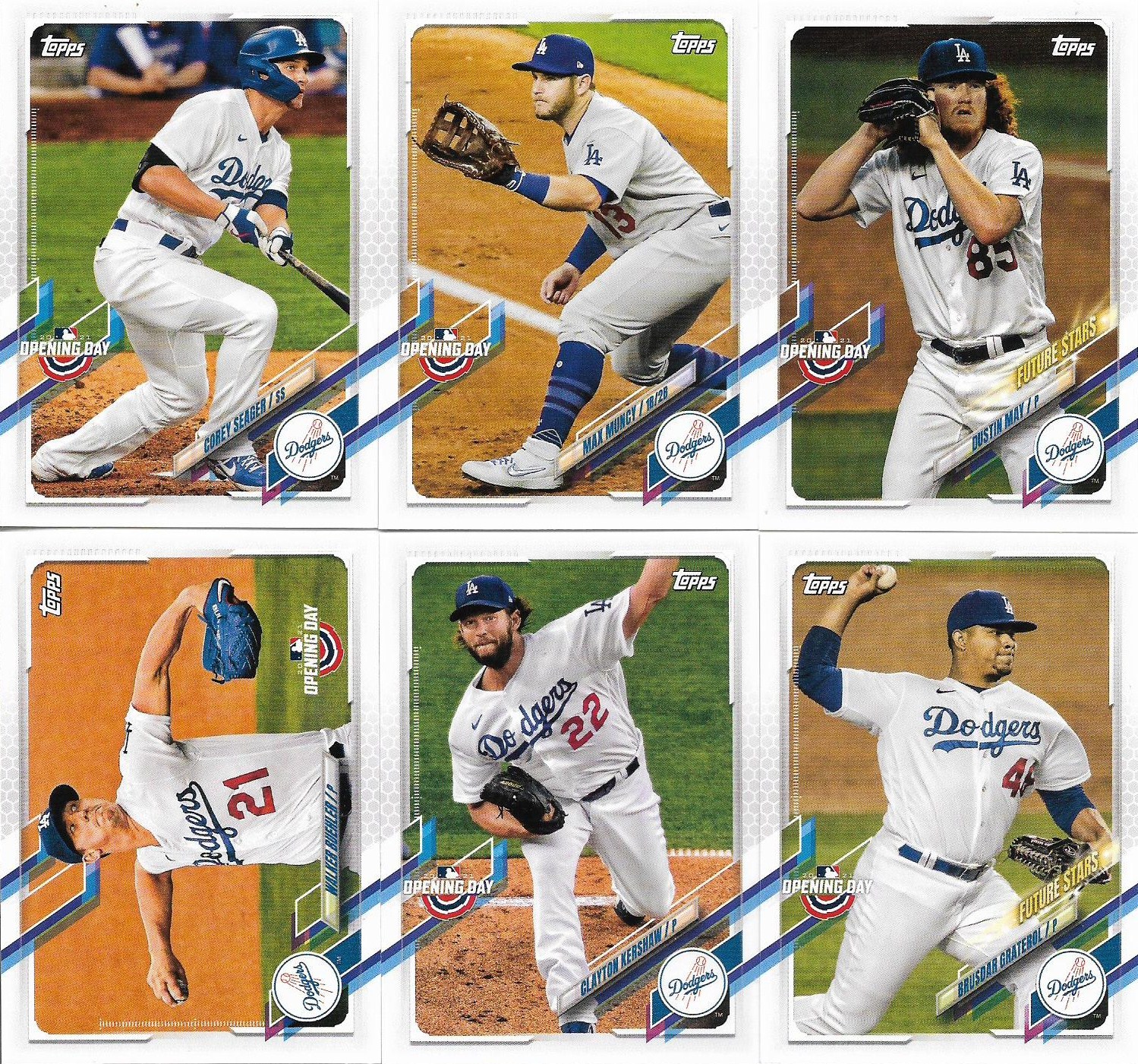 The big selling point to Chris' recent breaks -- for me -- is the new stuff that he opens. With no packs to open, this is the best way to get the Dodgers that I need, whether I feel like I'm being impatient or not. 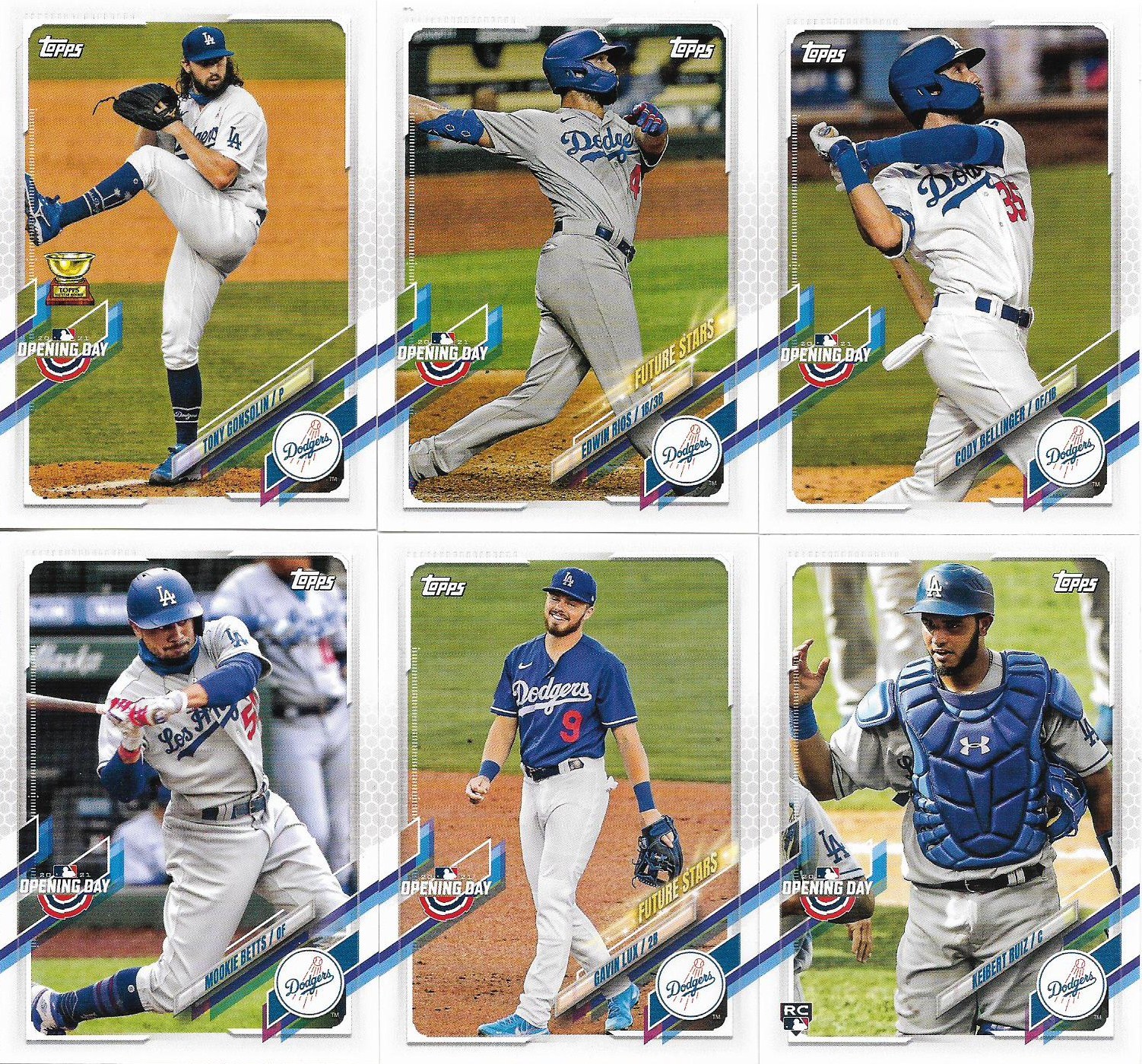 I've never even really liked Opening Day -- there are plenty of posts about that on this blog -- so grabbing all the Dodgers at once from one of the most pointless sets Topps makes is a no-brainer. 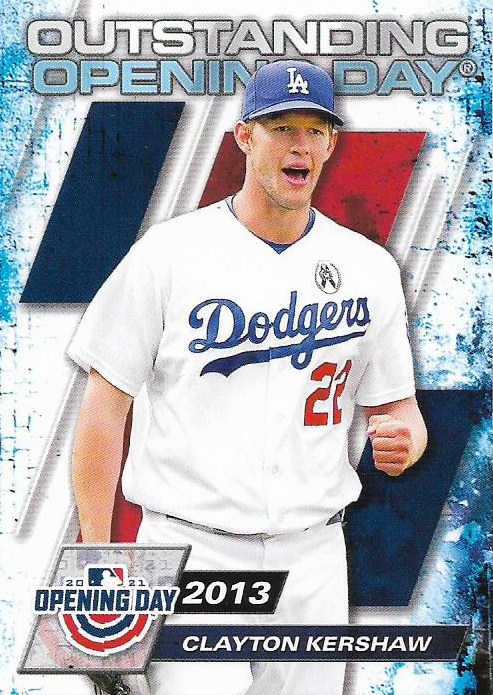 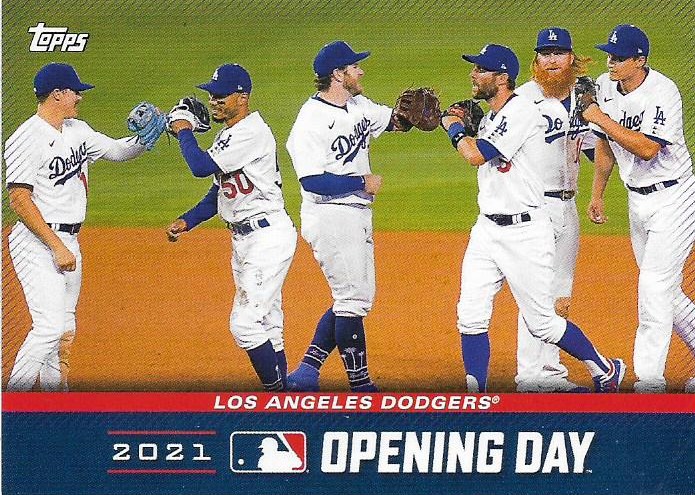 I ended up with a couple of the inserts. In recent years the inserts have been OD's strong point, especially last year. But there are no "Spring Has Sprung" inserts this year and the designs are rather uninteresting compared with past ones. The best part of these two is that the back of each card discusses a Dodgers triumphant victory over the Giants. 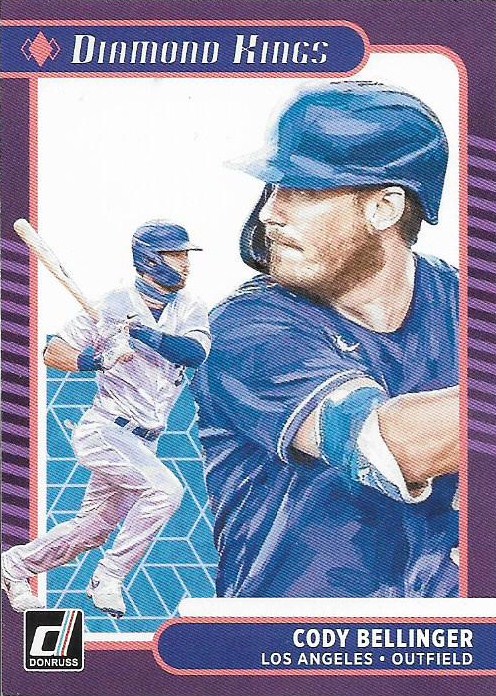 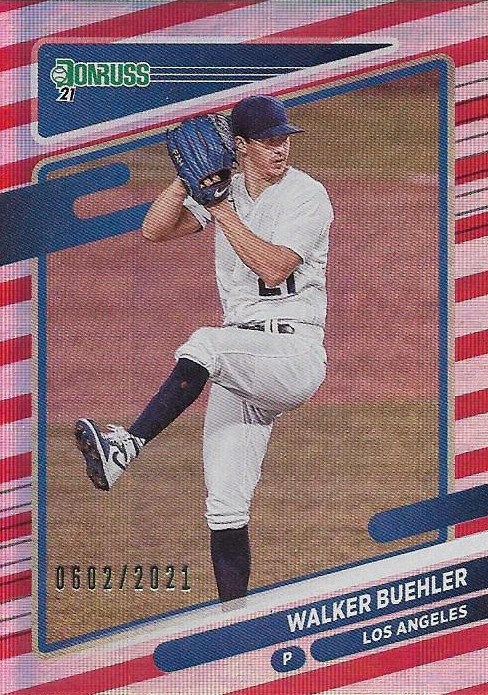 Nachos also opened a box of Panini Donruss but somebody had shipped me most of the Dodgers from that set before the group break ones could arrive. What's above is what I needed. The candy cane parallel is weird. Most of Donruss' parallels are weird and because of the random nature of them, Panini could come up with an infinite number of parallels (it's the toaster oven parallel, it's the red-speckled belly sparrow parallel, it's the power steering fluid parallel). You think they have a lot of them now? It could be much more worse and ridiculous. 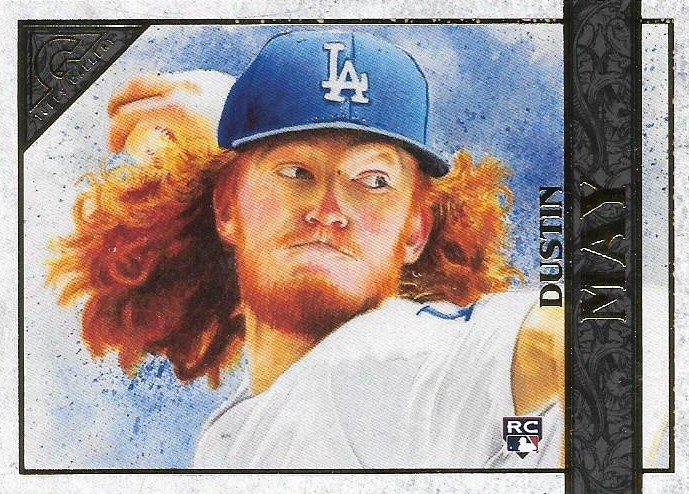 One last current card to show and it's from 2020 Gallery, one of those sets that allegedly passed through a big box store like a ship in the night that no one saw.
Chris opens a lot of boxes from the turn of the century, either late '90s stuff or cards from around 2000-04. I barely collected those years so I welcome getting the cards I need. But I'm starting to have them all now and that time period makes things difficult to finish off because short-printing is all over base sets from that time and also collation is not cool at all.
Still ...

These finished off the base team sets for 2002 Fleer Focus, 2003 Playoff Portraits and 2004 Leaf Second Edition. This is good, because the chances of me pursuing any parallels or inserts from this time period are nonexistent.
The most successful set for me from this time though was 2003 Donruss Studio, which was unexpected, just because I didn't know what the set offered.

I was able to wrap up the base set for the Dodgers with these three cards. 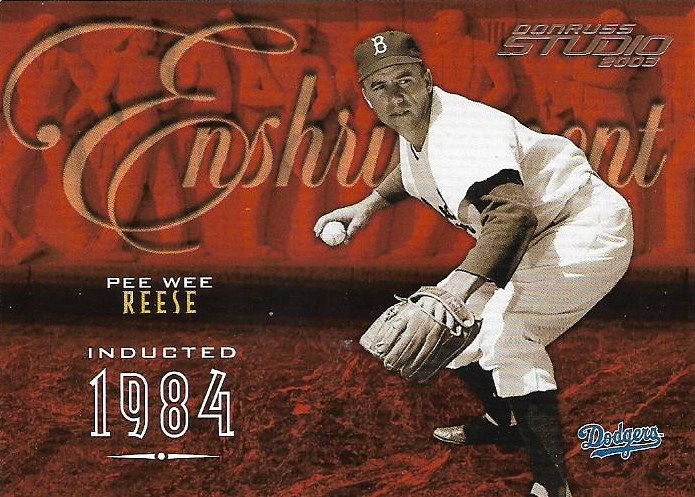 I got a very nice numbered insert of Pee Wee. Unexpected, because the Braves absolutely dominate all the inserts and hits from this era. 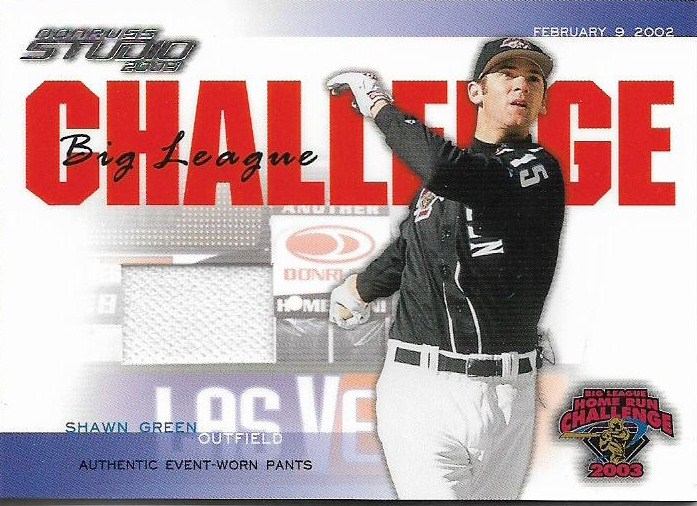 And I got a relic, too!
Sure it's from a Home Run Challenge uniform.
Sure it's "event-worn pants."
Sure it's my 11th Shawn Green relic as the SG relics are growing like weeds again after I pruned back a few when I had reached 15.
I still feel special. 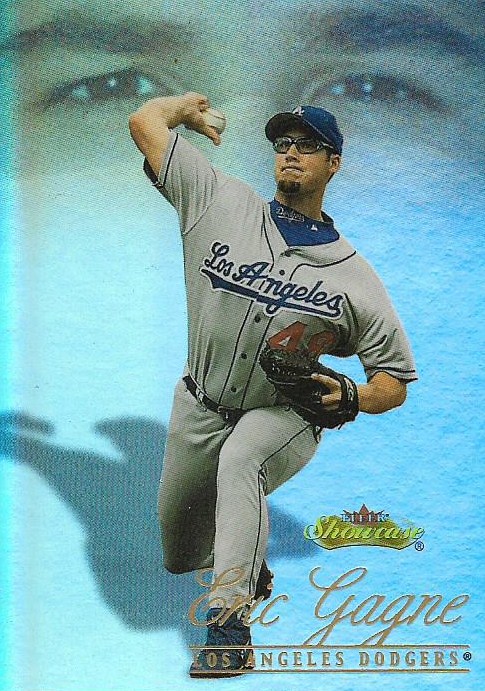 The Group Break included Fleer Showcase from 2001. This is one of those fancy sets that makes me feel like I'm walking in one of those expensive clothing and jewelry stores and security is going to kick me out at any moment. It's a bit too upscale for me.
This unsettling Gagne card, though, was the only card pulled that I needed. I guess I'm fancier than I think.
But Chris added a set that's more my speed as he opened a box of 2015 Finest. I love Finest, especially from the 2000s, and I looked forward to this box more than most of them. 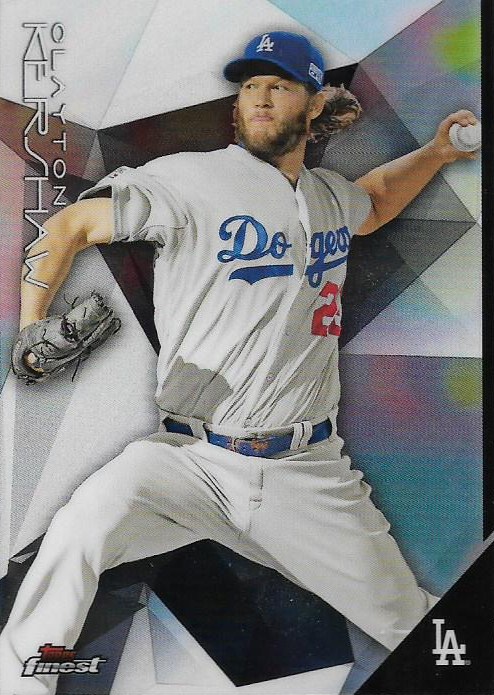 I received the last Dodger from the set that I needed -- Kershaw, of course. 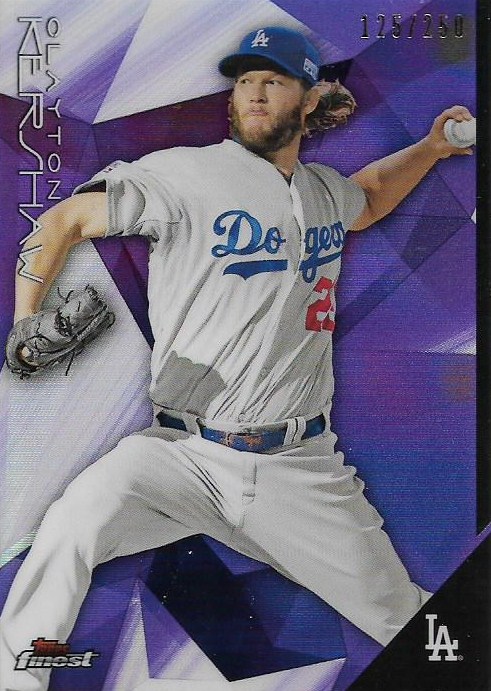 And just to show all those people who were withholding the Kershaw from me, I landed the numbered purple Kershaw, too! 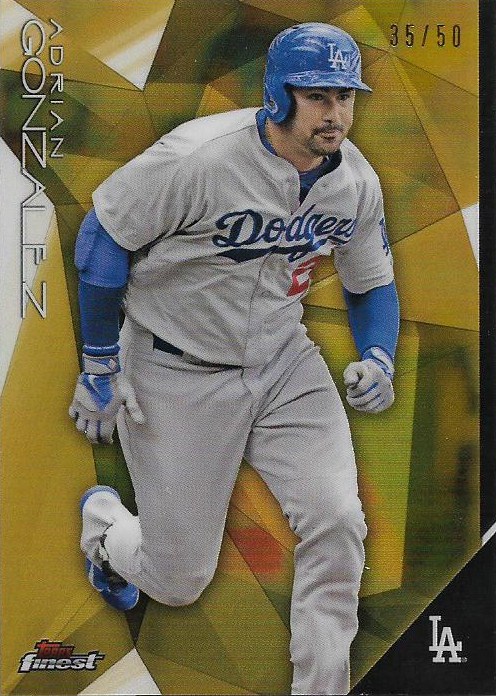 Also a gold parallel Gonzalez numbered to 50.
So, this is the stuff that's making me feel more productive in my collecting pursuit while there are no packs to open. I let somebody else open the packs for me!
Hey, it's a lot better than spending $300 on a box myself.
Anyway, that's another show-and-tell post, but that's all I have after striking out on my earlier planned post.
You never know, the inspiration may strike again, and I'll be posting rapid fire as always. But if I cut back, please know that it's not due to time constraints or stress or disinterest.
It's more that I hate it when I repeat myself.

carlsonjok said…
Uh, your 5 times a week content is still more thoughtful than my 5 times a year dreck. So, if you want to cut back, I say go for it. Ultimately, the only person you need to please is yourself.
May 11, 2021 at 7:31 PM

John Bateman said…
MLB Baseball is 144 years old - Miguel Cabrera is the only active player in the top 175 of all time Runs Batted In leaders (with Pujols retirement and Cano suspension). The all-time RBIs list does not change very rapidly anymore - there is not much too look, everyone is staying in there same position. However if you look create new list (for most RBIs say from 2005 to today.) that list would be always changing. There would be newness to it and the reason to look at it, would be the constant changing.

Most collectors like myself mid 50s and up, it becomes harder and harder to find things new about baseball cards from 1952 to 1991. Maybe the focus should become more of the last 15 years - such as what are the trends or different about cards.

One blogger noted that Nick Castellones(sp) of the Reds is usually shown as a fielder on his Topps cards even though he is a terrible fielder. That post felt like a Night Owl post - The ability to look at cards and see something no one else sees and write about it.

I know you probably dont have all the Topps cards from the last 15 years (I don't even have 7% of them - its not the 80s anymore) but I know you can probably find something that no one else can see. Write about it. And make it interesting.
May 11, 2021 at 7:36 PM

Peter K Steinberg said…
As you say it's your blog & your rules. You pull cards and research and draft something: go with it. You perspective might be different. And even if it's not, it's writing and there is value to your writing in that I think I speak for all your readers: we'll read it & benefit from it.
May 11, 2021 at 7:56 PM

Nachos Grande said…
Glad you ended up with so many Dodgers that you could actually use! We'll see if I can continue to pull Dodgers left and right with the next Breaker's Club.
May 11, 2021 at 8:24 PM

Johnnys Trading Spot said…
Heck, If I didn't repeat myself...repeat myself, I'd have no I'd have no posts to write posts to write. That was fun. Most of my posts differ so much from yours because they're more of a show and tell mixed in occasionally with some contextual writing. Hmmmmmmmmmmmmm, maybe that's why you have a gazillion followers. Not to mention a gazillion posts, it's bound (an idea) to repeat it self or come to the forefront. That's okay, I don't believe the newer post version would bore any of us faithful readers. Heck (again), I pee everyday and I don't mind repeating that :) Also noting that many of your faithful may not have been following you when you first wrote it. so it would be new for them. Just saying.
May 11, 2021 at 8:38 PM

steelehere said…
I check you blog everyday around 5pm PST looking for new content. I can understand if you want to slow down as what you’ve done is very impressive. If you’re just looking for ideas, you have a lot of regular features that are always great reads when you update them.
May 11, 2021 at 8:54 PM

Matt said…
So what if you've already covered the topic? Chances are you'll be able to add some fresh perspective, especially if a few years have passed since the post. Besides, your talent for writing is as much a reason to read your blog as the topics themselves. We all appreciate the work you put into your posts!
May 12, 2021 at 11:11 AM

Bo said…
You consistently notice things about cards that nobody else seems to. You have particularly good pattern recognition which makes for interesting posts.

I mailed out a PWE with your '67s - I was actually wondering if you would be writing a blog post on the backs of those cards. Hal Reniff is one of the funnier writeups I've seen - "the chunky righthander works in the Yankees ticket office in the offseason". When I pulled the Leon Wagner card for you by mistake I noticed the bit about him rollerskating with his wife. There's probably lots of other gems like that in the set.
May 12, 2021 at 11:47 AM

Nick said…
I've settled into a once-a-week blogging routine lately - mostly due to time constraints and lack of writing energy - but I've found it to be an enjoyable pace. I did feel at times in the earlier years of my blog that I forced posts or tried to churn them out on an "assembly line," as you said. It's great to be a frequent poster, and I always love reading day-in, day-out posts on blogs like yours, but for me it's been nice to pull back the reigns a bit.
May 12, 2021 at 12:09 PM

Fuji said…
I'm impressed that you caught yourself and figured out that you've written about the topic before. That's one good thing about having a bad memory. I'm sure I've written about the same thing on numerous occasions, but since I don't remember it doesn't bother me :D
May 12, 2021 at 9:16 PM

Nick Vossbrink said…
Nice haul. I just went through my collected break from Chris as well. I can't bring myself to blog about those kinds of things. Trades yes but even breaks are tough. I'll keep on my one per week frequency for now and see what happens.