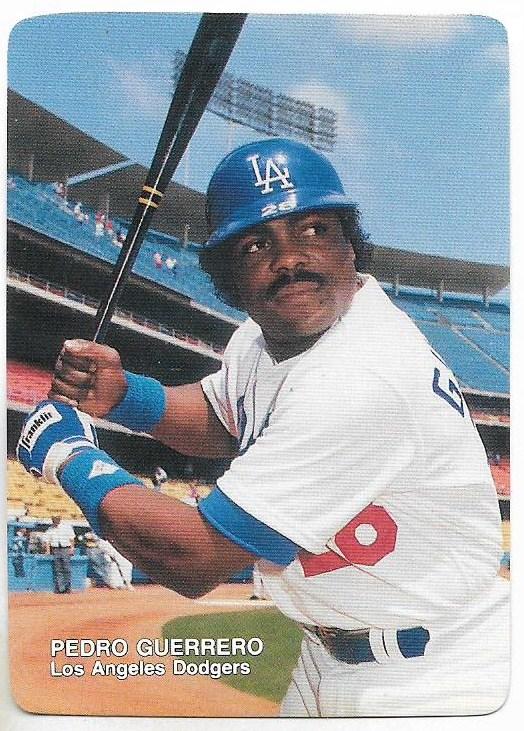 For years, the phrase "mother's cookies" meant to me exactly that: the cookies my mom baked.
In fact, I would have looked at you oddly if you said, "mother's cookies." Why the need to be so formal? Nobody calls her "mother." She's mom!
Mother's cookies -- or Mom's cookies -- makes me think of all the cookies my mom made, those ones I'll never have again. Like most kids, I think my mom made the best cookies and nobody else's mom could come close. She didn't make anything exotic, but what she made tasted better than anything else: the best chocolate-chip cookies, the best peanut butter cookies, at Christmas time, the best cream-cheese cookies.
It's rude but it's true, sometimes I'd go over to a friend's house and have one of their mom's cookies and I'd want to spit it out: "these aren't mom's cookies!"
I've lived on the East Coast all my life, so I knew nothing about the California-based company called "Mother's Cookies," which had been churning out cookies for more than 60 years by the time I started collecting baseball cards. Those cookies, and the cards that came from that company, never worked their way to any east coast store or vending machine I ever saw.
I think the first time I became aware of Mother's Cookies cards was likely flipping through a Fritsch catalog, which sold all kinds of regional issues. But I didn't pay much attention. It all seemed so far away. Mother's Cookies sets go back to the '50s, but the heyday for those cards was the mid-1980s to the late 1990s. And those cards always featured West Coast teams like the Dodgers, Giants, Angels, Padres, A's, Mariners and also Texas' Astros and Rangers.
The closest team to me out of that group is Houston, more than 1,600 miles away!
As card blogs popped up and I began to become more familiar with regional issues -- one of the great things about blogs is how they can originate from anywhere -- I'd read odes to Mother's Cookies and I started to get interest in them a little bit. 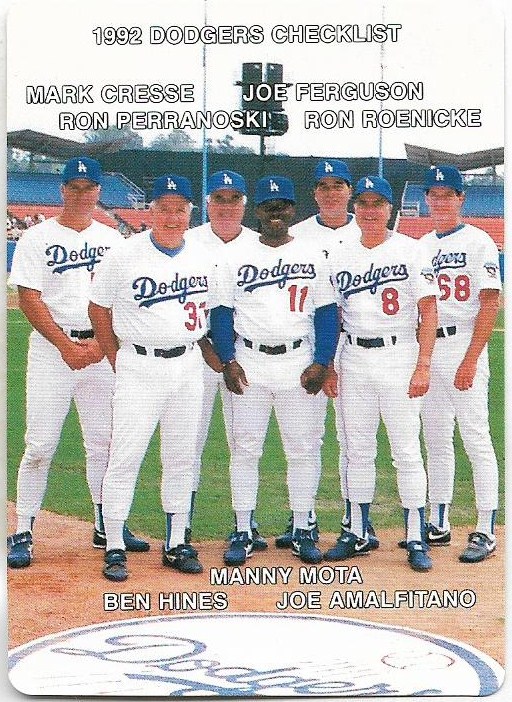 Not that interested in them, mind you. The cards' trademark rounded corners make them look like any Broder card. But I did like how inclusive the cards were, each team set showcased almost everyone on the team and coaches, too! And I also liked how just about all of the pictures are taken within Dodger Stadium. It might be the best set for picturing the most beautiful stadium in the world.
So I've added a few of the cards over the years -- just a few.
The Pedro Guerrero at the top of the post is my only 1988 Mother's Cookies card. 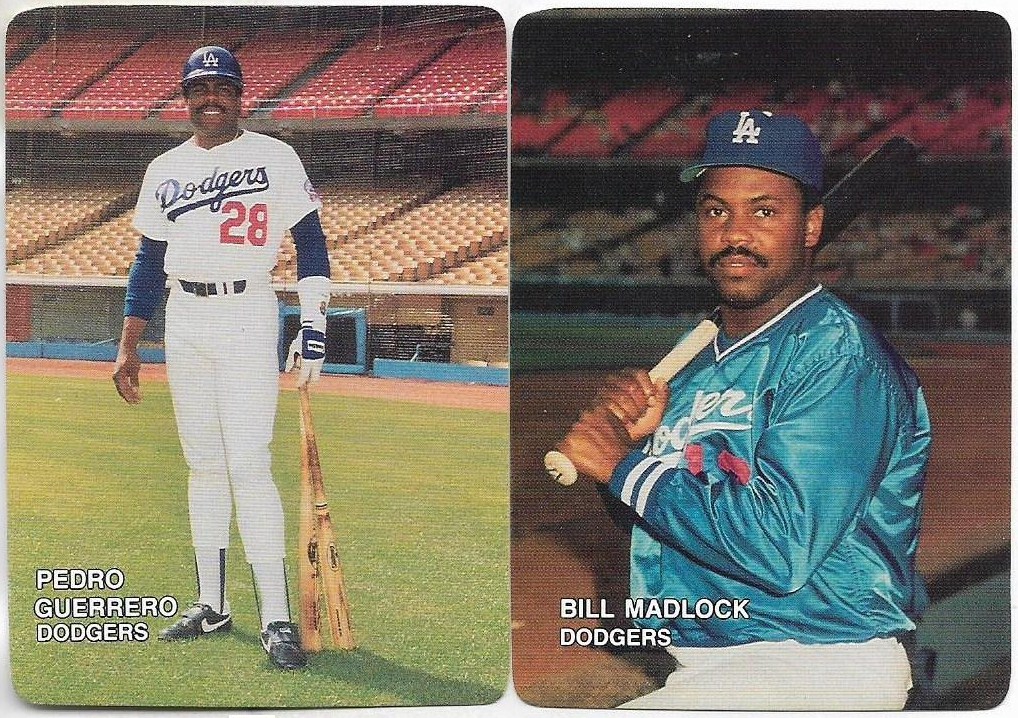 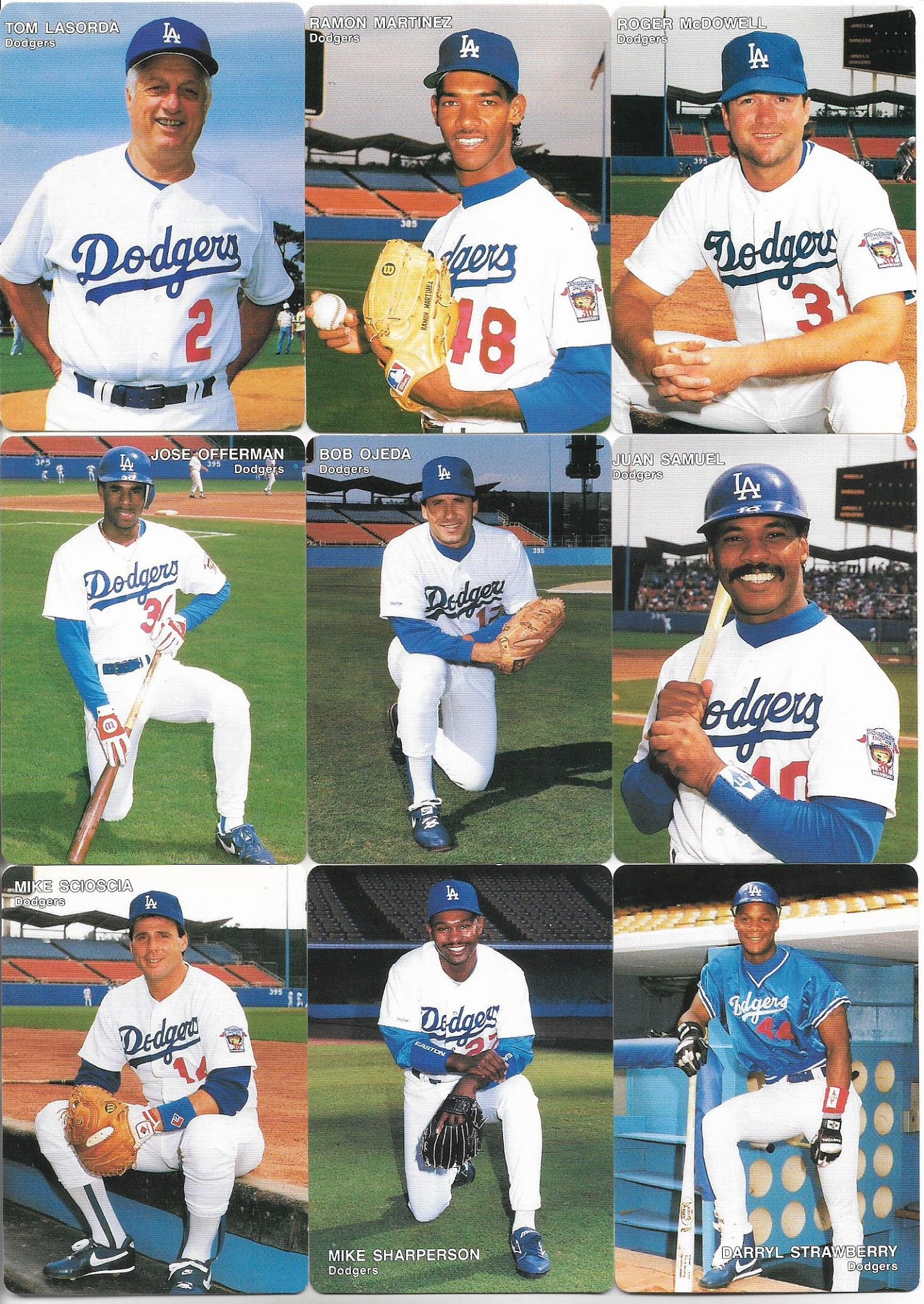 Just some of them.
It figures I have the whole '92 set. The Dodgers were epicly bad that year and I'm pretty sure all of their '92 cards are more plentiful than any other year's cards because of how horrid they were. 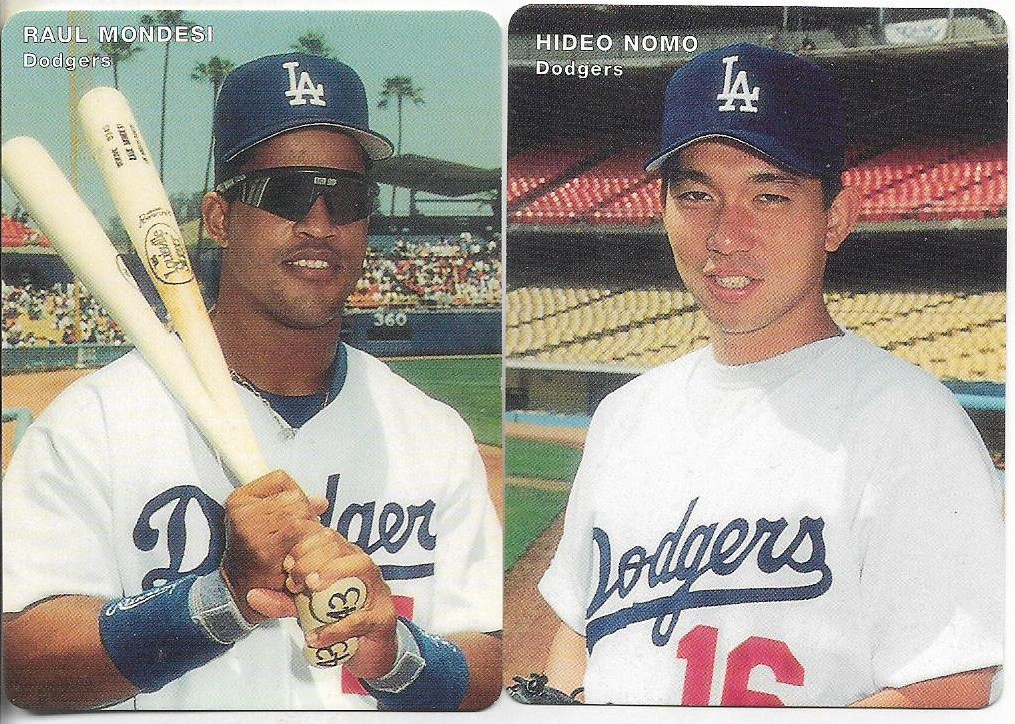 Moving on to 1995, just two MC cards from that set. A prominent pair. 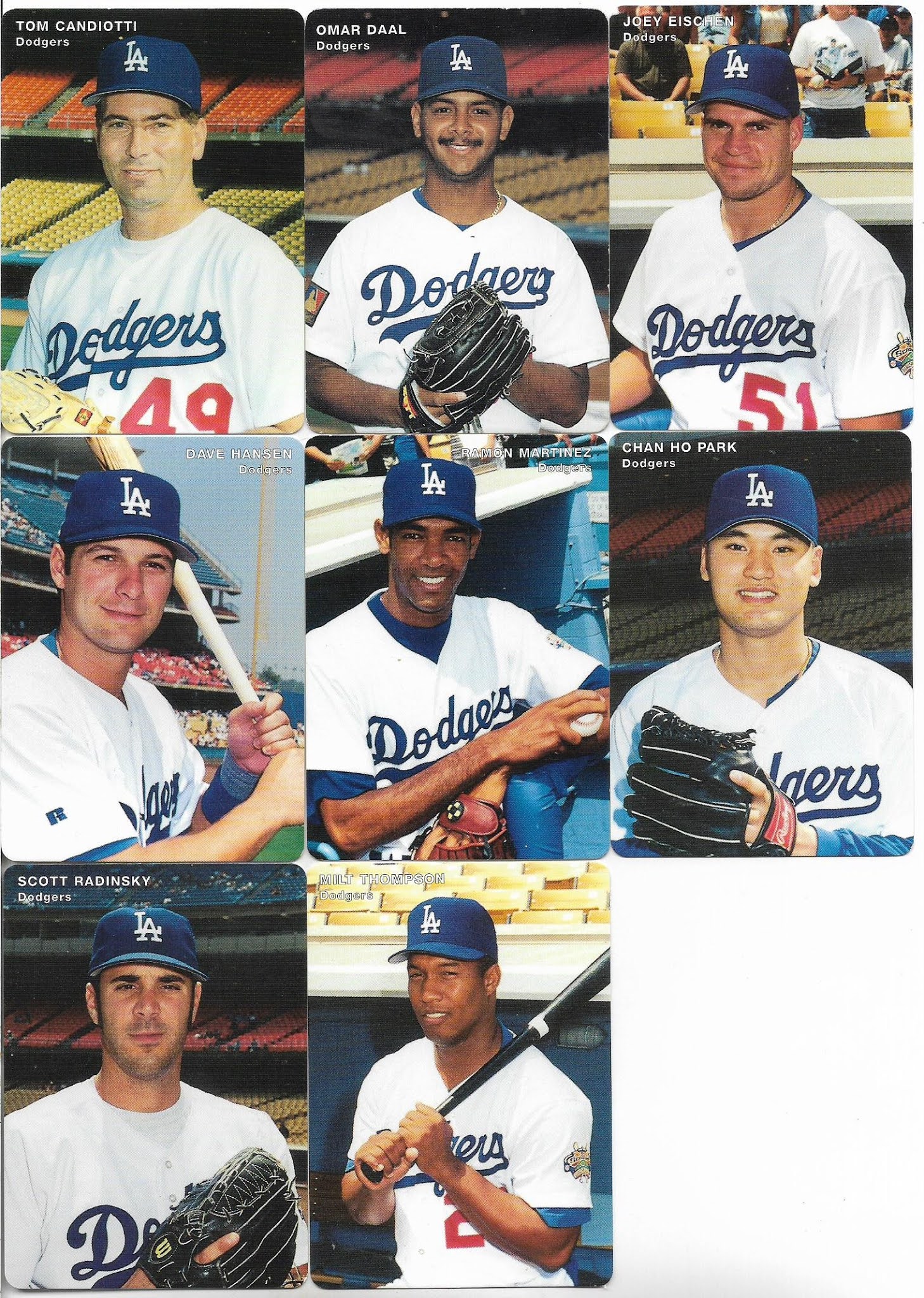 The '96 MC cards that I own give you a good idea of the randomness that can be found in their sets -- although the Omar Daal card is actually from 1994 and I didn't discover that until I had scanned it already and I ain't rescanning Omar. Part of the reason is because those rounded corners make Mother's Cookies cards a bitch to scan.
They're not Kellogg's or even Hostess, but, on Mother's Day, it seems like the best card thing you can do is buy some Mother's Cookies cards. So I've finally done something I should have done years ago and started ordering some Mother's Cookies Dodgers sets. Today -- Happy Mother's Day! -- I picked up the Dodgers Mother's Cookies complete sets from 1987, 1989 and 1990.
I don't have a clear idea on when the MC sets began for the Dodgers and when they ended, but I'll get there. (There is also that Piazza-Salmon set from around '93/'94 but I have most of those).
In fact, I could make this a Mother's Day tradition.
So, congrats, Mother's Cookies, you've finally worked your way into my life. But I guarantee your cookies aren't as good as my mom's were.

Johnnys Trading Spot said…
Some of those 50's sets can get pricey. so much that reprints were made in the 80's.

Nick said…
I don't have any clear memories of my mom ever baking cookies - so I guess for me, "Mother's Cookies" has always signified the baseball cards. I'm a big fan of these, mostly because they've always been somewhat exotic to me since they were issued halfway across the country from where I live. The Dodgers sets are especially cool given the Dodger Stadium scenery in the background.
May 9, 2021 at 7:32 PM

Peter K Steinberg said…
Thanks! I'll take the Strawberry. You have my address. Much appreciated. You're the man. & all that. Sincerely, Peter
May 9, 2021 at 7:34 PM

Nick Vossbrink said…
While I agree that these look like Broders, I believe their production quality is a little better plus the backs are a bit more interesting. The Giants and A's cards in the 1980s were, I believe shot and produced by Barry Colla who also operated in that more-legit Broder sphere.
May 9, 2021 at 8:02 PM

Johnnys Trading Spot said…
CORRECTION: My bad..I confused those with the Johnston cookies.
May 9, 2021 at 9:04 PM

GCA said…
I just saw some A's and Giants sets for sale at a shop called Peninsula Sports Cards - in California when Fuji and I met up. Stay tuned for posts from both of us soon. And I wasn't out here primarily for cards....
May 10, 2021 at 1:19 AM

defgav said…
Definitely ate my share of Mother's Cookies as a kid in Southern California. The type I think of first are the frosted oatmeal cookies.. which were good, but a little too hard/crunchy.
May 10, 2021 at 12:08 PM

Fuji said…
Mother's Cookies always takes me back to my childhood when I'd circle the giveaway day on the schedule and beg my brother to take me to the game. As a kid, I think it was just cool to be able to add something different to my collection.

Decades later, I also appreciated how they encouraged fans who attended the games to trade with each other by handing out only a partial set with a bunch of duplicates of one player. Back in the day it was pretty annoying, since I wasn't the type to stand around and ask strangers if they wanted to trade. But in hindsight the concept is pretty cool.