Late-term Dodgers (the ones not mentioned already) 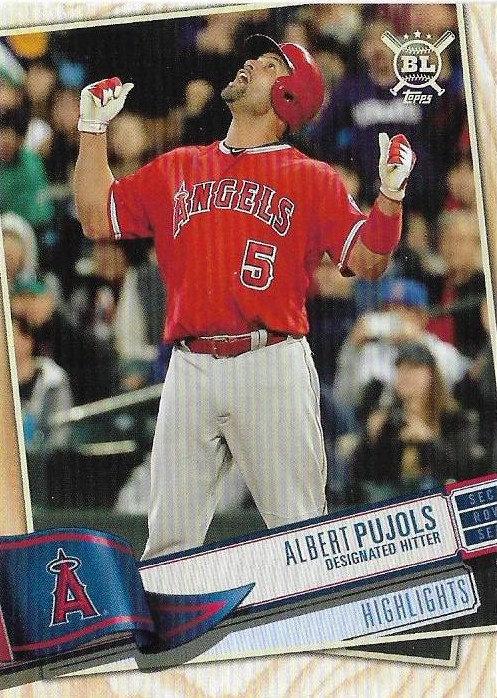 Obviously, I considered last night's Dodgers-Diamondbacks game must-see viewing because of Albert Pujols' debut in a Dodgers uniform.
I had already been told by two people that the Dodgers' signing was a "dumb move," -- there are always people ready to piss on the Dodgers' parade even before anything has even happened -- so all the more reason for me to be pleased when Pujols knocked in the eventual decisive run with his first Dodgers hit.
Even if you aren't a Dodgers fan, it was bizarre to see Pujols in a blue uniform, let alone a Dodger blue one. He played 20 years for the very red Cardinals and equally red Angels -- both well-known adversaries of the Dodgers. And now he was starting for them.
Pujols' signing underlines our natural interest in players joining unfamiliar teams, especially at the end of a player's career. The Dodgers are full of such examples in their history, as I'm sure a lot of teams are (I have a feeling this is an even more-common phenomenon with fading stars and big-market teams since those teams have the money to throw at players who are accustomed to a certain lifestyle).
It's so interesting to us that I had an idea to address such Dodgers examples tonight, only to see that two or three other baseball writers -- some much more read than me -- had already seized this topic and listed off a bunch of players who I had planned on citing.
Here's an example from Jay Jaffe: 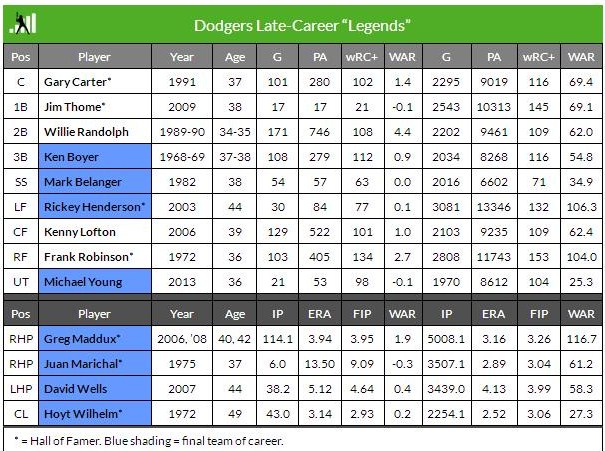 OK, that's a bunch of people I was going to mention. I even pulled Dodgers cards for all of them.
Then there was another example from Christopher Kamka with these pictures attached: 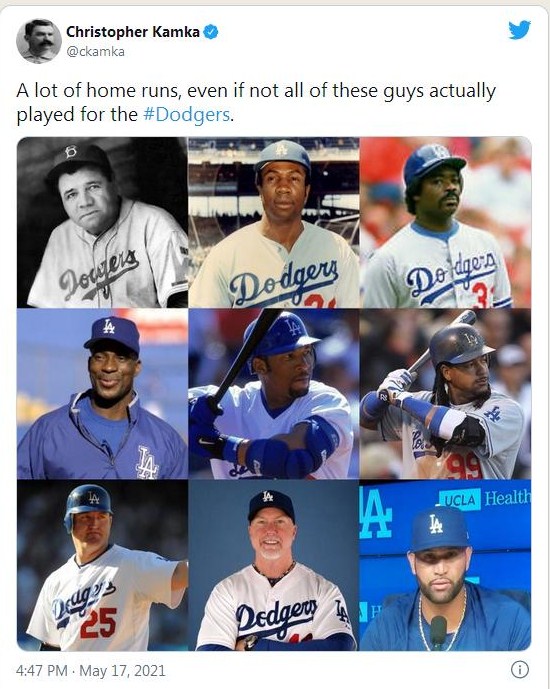 OK, there is Fred McGriff and Manny and those were guys I was going to mention, too.
And then the blog post where I saw each of the above examples. The SABR Baseball Card blog mentioned Hack Wilson, Dick Allen, Jim Bunning, Rickey Henderson, Greg Maddux, Juan Marichal, Frank Robinson, all guys on my previous list.
And then there were comments on this post or that mentioning Eddie Murray and Chase Utley and y'all have thought about this a lot!
But I will not back down from a challenge. I may be loathe to repeat what other people are saying (and repeating myself) but that merely inspired me to find the late-term Dodgers that these other people did not mention.
Here are 12 of them that weren't mentioned yet (or at least I haven't read anywhere else yet): 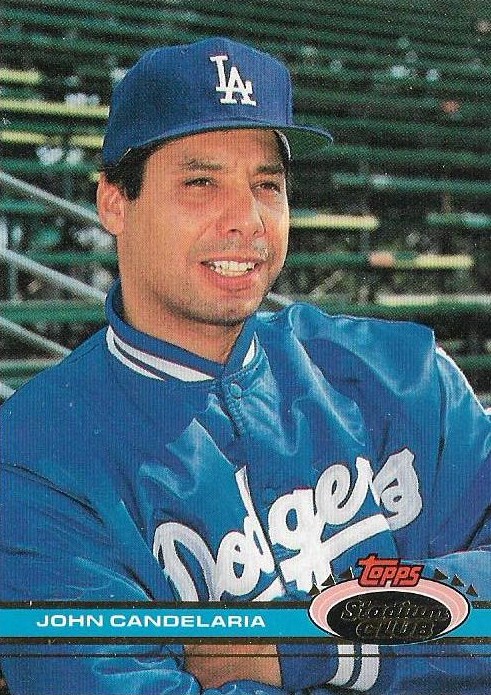 1. John Candelaria (1991-92)
Candelaria only seems like he was with the Dodgers for a long time because his time there corresponded with the peak baseball card glut period of the early '90s. But it was just two years. For those who experienced Candelaria's 10-plus years with the Pirates and knew the story about how the Dodgers allegedly rejected Candelaria during a baseball tryout because of his sketchy smoking habits, it was downright odd to see him as a Dodger on cards. 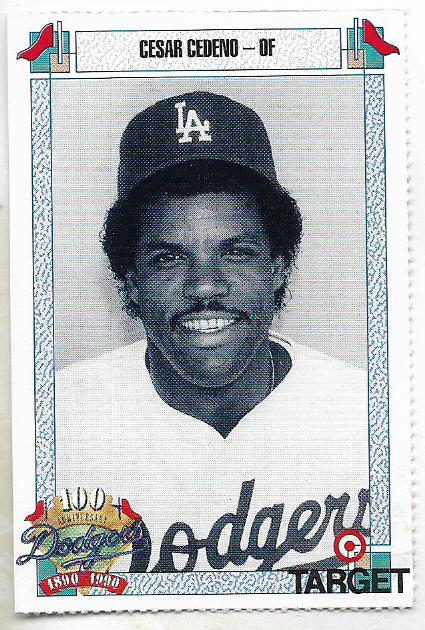 2. Cesar Cedeno (1986)
Considered "the next Willie Mays" by some during the early 1970s, Cedeno is known first as an Astro and then as a Red. He spent less than 40 games with the Dodgers in 1986, which is why this Target card is about the only one that can be found with him in a Dodgers uniform. 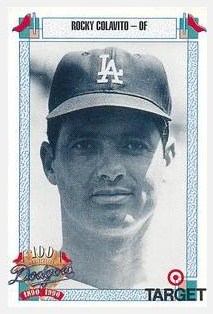 3. Rocky Colavito (1968)
More 1990 Target inclusiveness, Colavito spent the final year of his career with two big-market teams, the Dodgers and Yankees. Neither stay was very long, 40 games with the Dodgers and 39 with the Yankees. 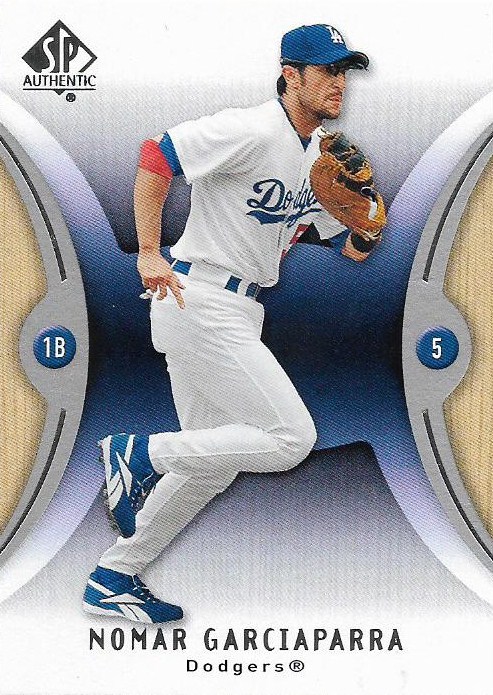 4. Nomar Garciaparra (2006-08)
I'm surprised Garciaparra wasn't mentioned on any of the above lists. Perhaps if he was still a shortstop by the time he reached the Dodgers he would have bumped Mark Belanger off Jaffe's list. Garciaparra is now well-associated with the Dodgers because of his job with the L.A. broadcast crew. 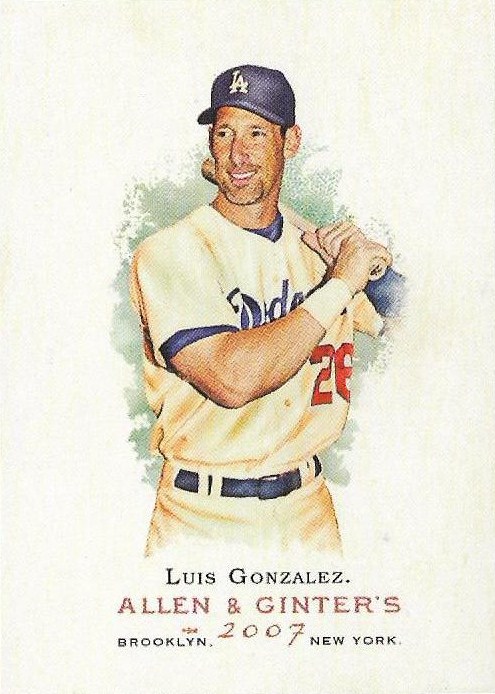 5. Luis Gonzalez (2007)
Not a popular Dodger with fans and some fellow Dodgers as he was one of the veterans known to have thrown their weight around a bit too forcefully when it came to some of the youngsters on that team, like Matt Kemp, James Loney and Russell Martin. Gonzalez closed out his career in '08 with the Marlins. 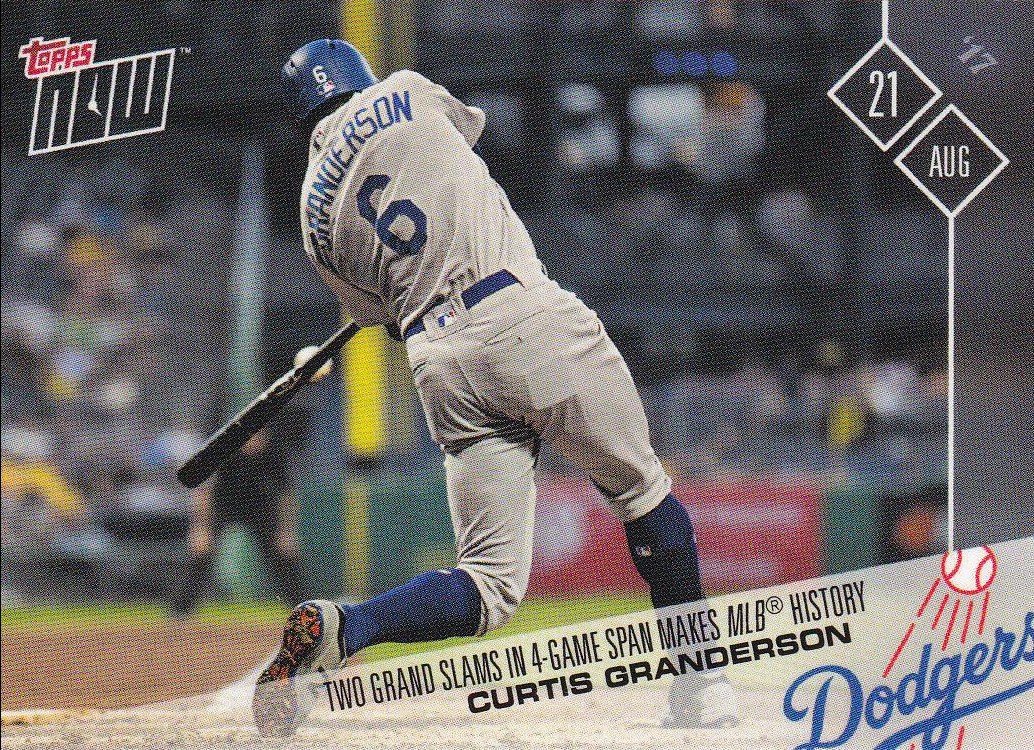 6. Curtis Granderson (2017)
Everyone buying Topps Now Dodgers cards right now is buying the Pujols card. But I used the Pujols opportunity to finally add a Curtis Granderson Topps Now card. Pujols -- if he lasts the rest of the season with L.A. -- will get a card in Topps Update this year. All there is for Granderson is Topps Now stuff so, fine, I'll take a card showing off one of Grandyman's 36 games with the Dodgers. 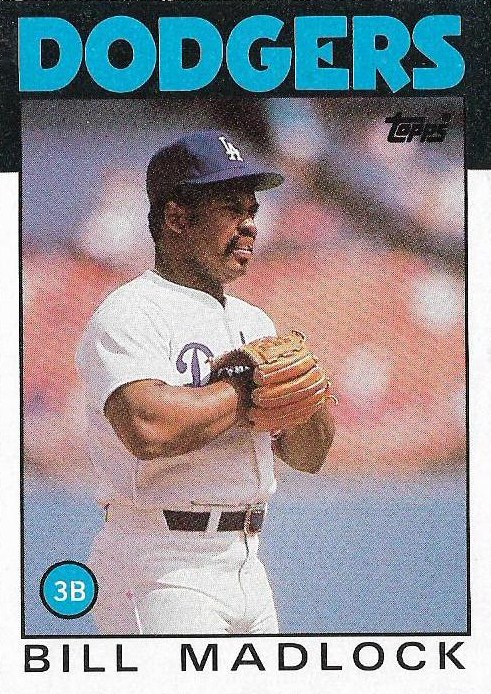 7. Bill Madlock (1985-87)
I can hear some collectors who began hoarding baseball cards in '87 saying "I think of Madlock first as a Dodger." OK, youngster, everyone else on the planet thought it was downright weird to see Mad Dog wearing those colors. Madlock was one of those players that I wished would play for L.A. back when he was starring for the Pirates. But he was only a part-time player by the time he was there in '85. He ended his career with the Tigers in '87. 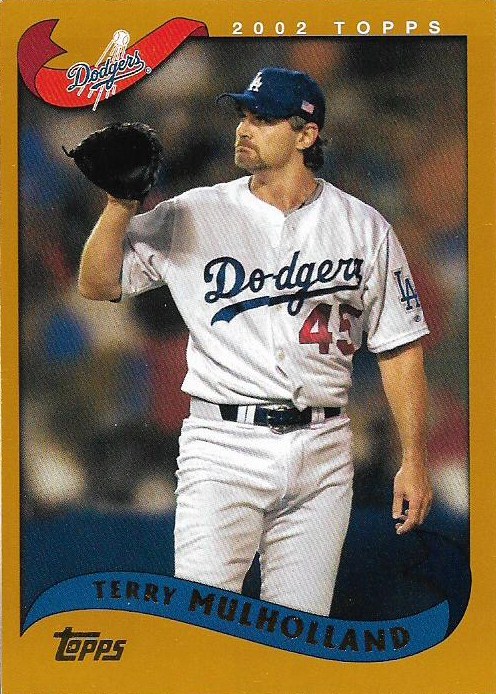 8. Terry Mulholland (2001-02)
Terry Mulholland's MLB career is a road map through most of the baseball teams in the United States. But even with that much traveling it was still a shock to see him with the Dodgers. This was a guy who had three different tours with the Giants! Mulholland actually lasted four more years after his L.A. stint and played for three more teams! 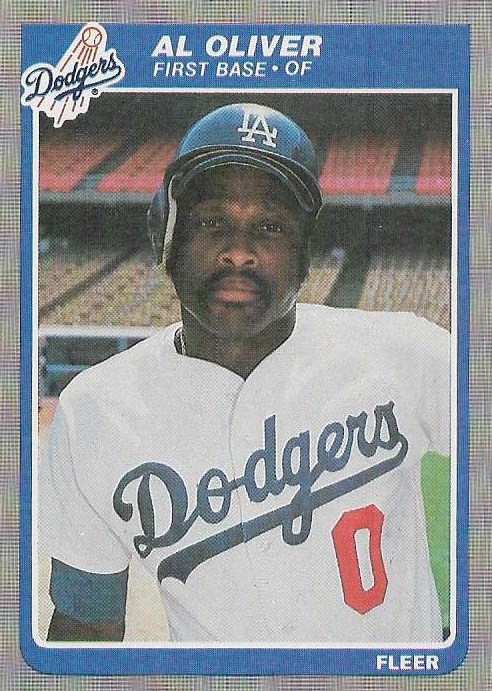 9. Al Oliver (1985)
I would've maimed in the late '70s to see Scoop in a Dodgers uniform. But it didn't happen until the tail end of his career in the mid-1980s and it was for just 35 games. Thank goodness we had traded sets by then to capture the momentous occasion. 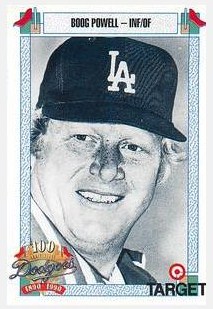 10. Boog Powell (1977)
One of the great misses of my baseball viewing days is that I was watching baseball in 1977 and I do not remember Powell batting for the Dodgers in a single game that year. I was still getting to know who everyone was so it's possible I saw him and it didn't even register ... and that's a shame. 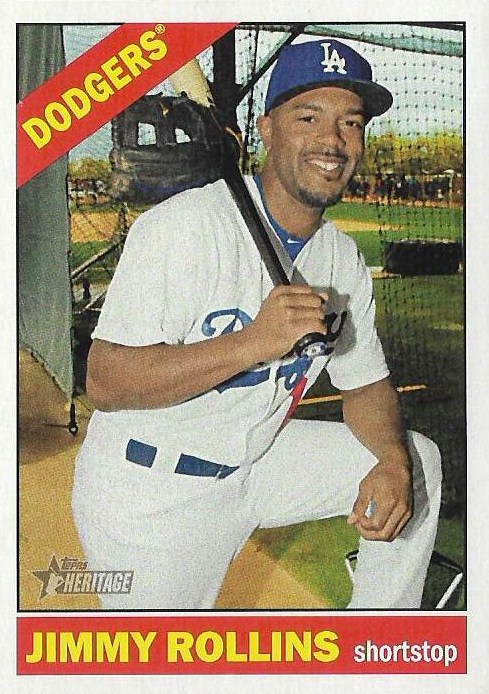 11. Jimmy Rollins (2015)
I have 20 different cards of Rollins as a Dodger, which is a tad excessive for someone who played just a single year for the team. 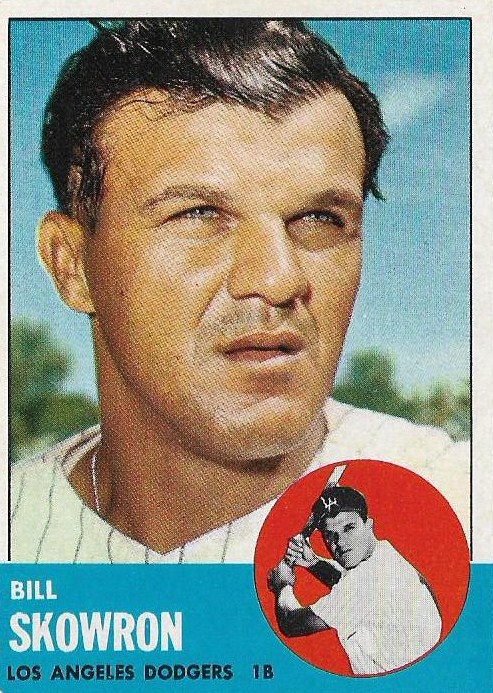 12. Bill Skowron (1963)
Bill Skowron is like my ultimate hero. He spent all those years with the Yankees in the '50s, beating up on the Dodgers in the World Series and then he came to the Dodgers in '63 and promptly hassled the Yankees to help the Dodgers win the World Series that year. Skowron wasn't really at the end of his career in '63 as he played five more years for three other teams, but his time with L.A. is notable.
So there is 12 late-term Dodgers that you haven't read anywhere else (maybe). And I got through the list without mentioning Andruw Jones!
There are actually a whole bunch more notable late-term Dodgers than even all the folks who have been cited in the past 48 hours, guys like Sandy Alomar Jr., Dave Goltz, Jim Leyritz, Ken Brett, Rick Dempsey, Steve Finley, Bobby Bonilla, Josh Beckett, John Tudor, Jerry Grote, David Freese, Kevin Elster, Don Stanhouse, Jody Reed, Gregg Olson, Sal Maglie, Enos Cabell, Mike Blowers, Wilson Alvarez, Greg Gagne, Phil Garner, Charles Johnson, Zoilo Versailles, Kevin Tapani, Juan Rivera, Bill Mueller, Marquis Grissom, Garret Anderson, Corey Snyder, Larrin Lagrow, Bob Ojeda, Scott Podsednik, Mike Lieberthal, Mark Ellis, Bill North, Jeromy Burnitz, Dan Haren and several more.
But you get the idea.
I'm going to wait for Pujols' 2021 Update card to get my first card of him as a Dodger -- I only grab Topps Now cards if I'm desperate because I don't like how they look and they're too expensive.
So, it's a gamble that he will last that long in a Dodgers uniform. But, so far, so good.

Jeff B - Wax Pack Wonders said…
Love that you took some of the lesser known short term Dodgers for your list. A couple were new to me, and I'm pretty in tune to the topic of players having short stints with teams.

I saw a great stat today listing the last 5 over 40 Dodger players too get both a hit and an RBI in the same game. Pujols, Brad Ausmus, someone I can't remember and then Greg Maddux and David Wells. Wells was 44 when he did it.
May 18, 2021 at 7:12 PM

Nick said…
Always love an unfamiliar uniform-themed post! Gotta find those Target Dodgers cards, pretty sure those are the only ones of Colavito, Powell & Cedeno in the Dodger blue.
May 18, 2021 at 11:14 PM

Brett Alan said…
Always have to plug Dime Box Nick's excellent Short-Term Stops series for anyone who doesn't know it. Most of his picks are late-career, but there are some early career guys, and one very notable guy who is always thought of as a Dodger even though he only played in (his first) 8 games for them.
May 18, 2021 at 11:25 PM

POISON75 said…
2 more Pitchers to add to the list are Hoyt Wilhelm & Brian Wilson both most likely to play for the hated Giants team. 1 catcher in Gary Carter 1st base Enos Cabell
May 19, 2021 at 12:01 AM

Fuji said…
There are collectors who think of Madlock as a Dodger first? I guess there's always at least one. But if we surveyed fellow collectors, I'd bet it's less than 5%. That being said... that 86T card is one of the first cards that pops into my head when I think of him. But he'll always be a Pirate first.

Great list. I always enjoy taking the trip down memory lane and reminiscing on player's tenures with teams they aren't well remembered for.
May 19, 2021 at 11:03 AM

Chris said…
I knew you'd be able to dig deeper into Dodgers short-term stops. Pujols in blue will take some getting used to for sure. In fact when I saw that tweet with the nine sluggers I recognized every player except him.
May 19, 2021 at 11:56 AM