We just did this 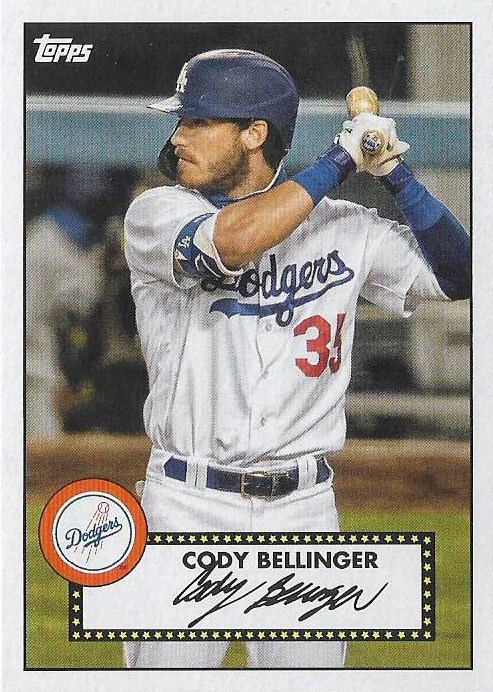 Three years ago, capitalizing on rookie sensation Cody Bellinger's 2017 season, Topps decided to issue a Target-exclusive 30-card series of nothing but Bellinger highlights.
Inserted into packs, your chances of completing that series was through going to Target many, many times or just being done with it and getting the whole thing on ebay.
I did neither because that is very on-brand for me. And, therefore, I'm nowhere near finishing the 2018 Cody Bellinger highlight insert set. 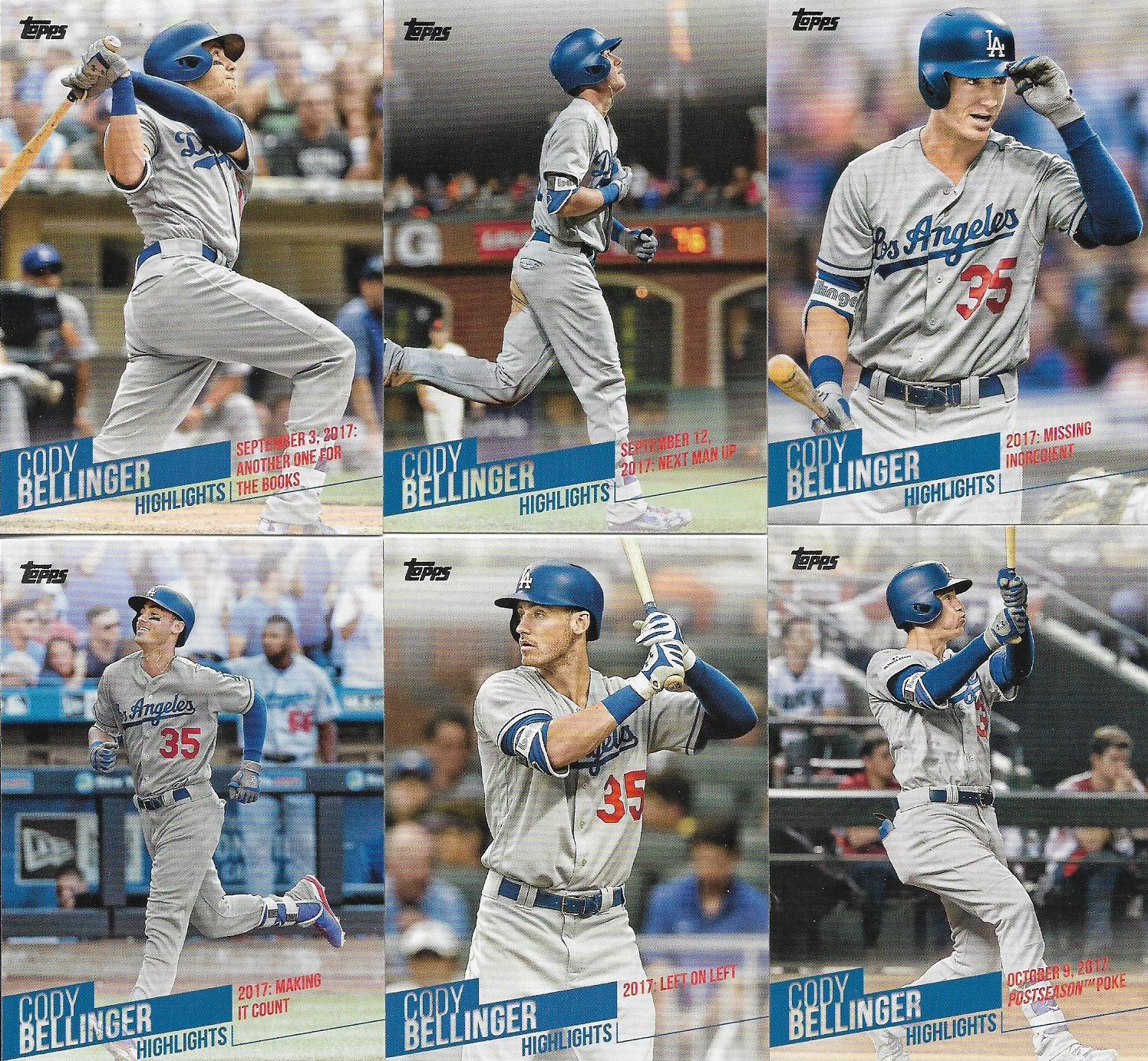 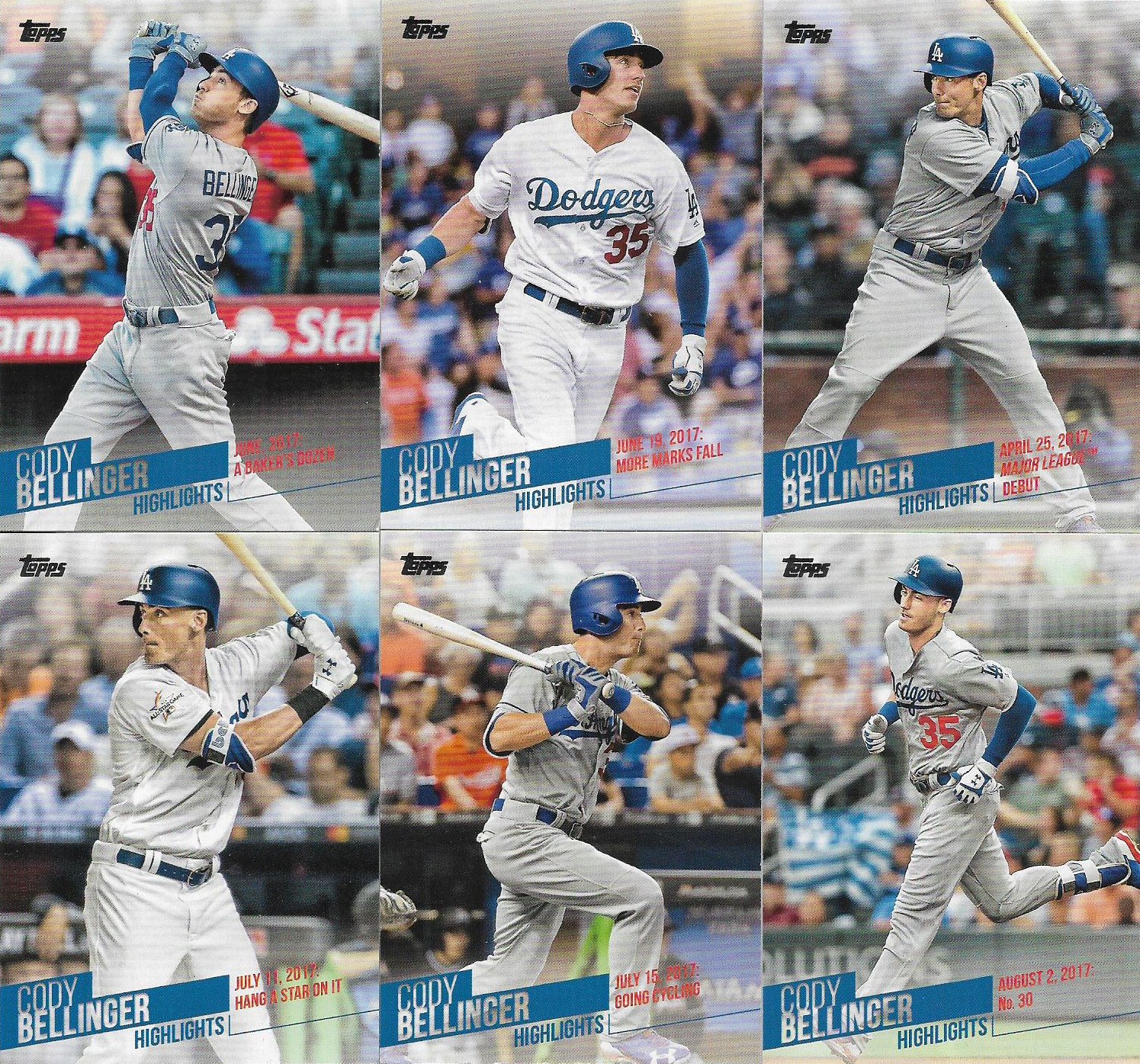 That's all I have.
That may seem like a lot -- because it's basically the same card repeated over and over -- but it's just 12 of the cards. I have 18 others to go.
Oh, and there are parallels: 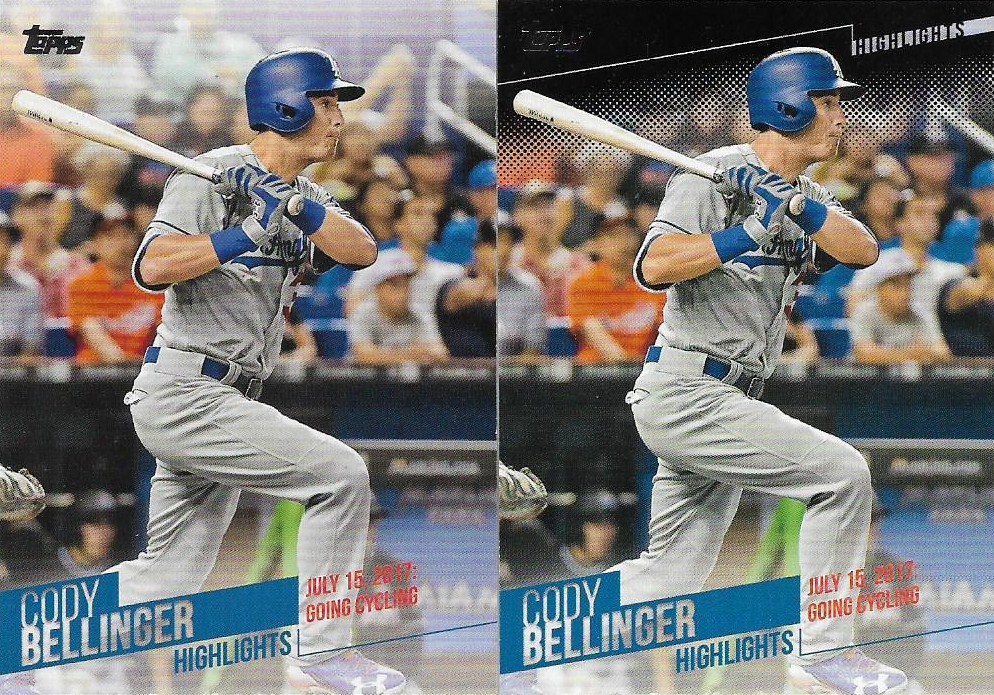 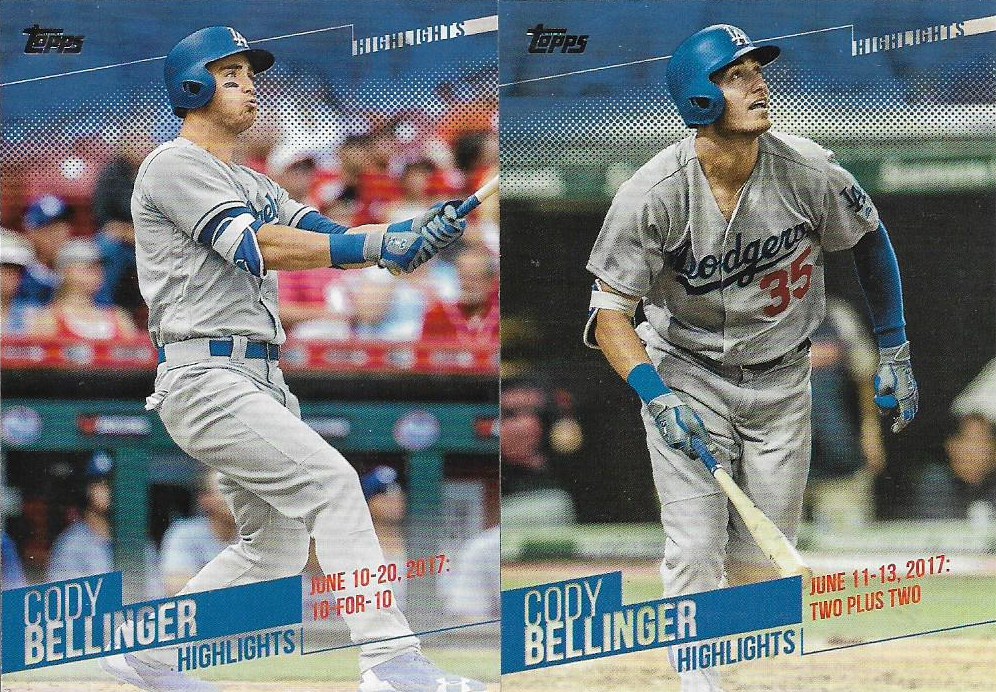 And blue ones.
So, of course, I haven't finished it in the last three years. It's not interesting enough for me to make the effort to complete it. I'm not a player collector, so the appeal of the same dude over and over, on the same design over and over, is lost on me.
But since it's cards of a Dodger player then, yeah, the objective is to one day have the whole set. And, sure, the stupid parallels, too, although there's much less of a chance that I do that.
So that's been the plan, way, way, way back in my brain for the last three years: pick up the rest some day just to have them all, I'll grab one here and then maybe another one a few months later, find a deal for a few others after that and before you know it, I'll have the whole, little set all to my ... 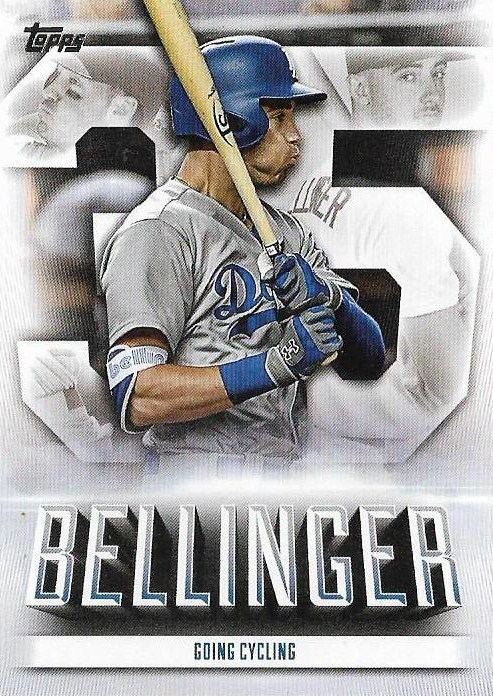 "BAM!"
Says Topps.
"Good god, what is that?" I say.
"Why it's a 30-card Target-exclusive insert of Cody Bellinger," Topps answers, clearly in the grips of senility because IT JUST ISSUED THE SAME THING THREE YEARS AGO.
Who is going to go through this again? Collectors just as forgetful as Topps? (p.s. I don't really think Topps is being forgetful). Yeah, sure, Topps, this is a brand new concept, I've never heard of such a thing showing up in Target ever before.
This also isn't the first time that Topps has done this. I know there were a couple of different retail-only insert sets for Aaron Judge. And somebody else who I don't remember. I suppose since Topps keeps doing this that somebody is buying these excruciatingly similar cards. But, actually, I'm a bit insulted. 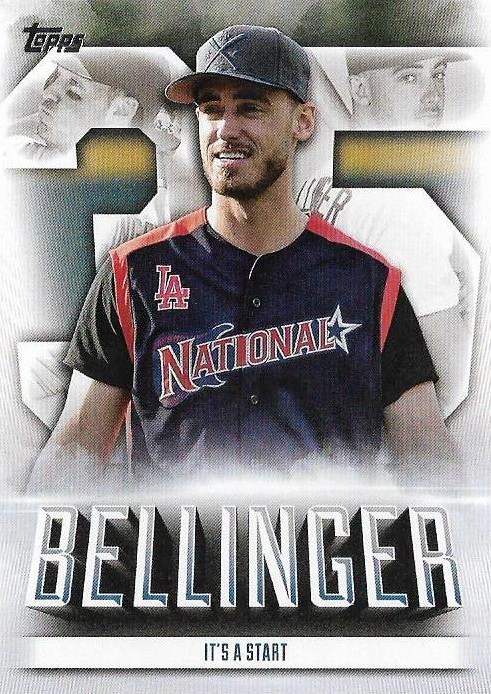 These two Cody Bellinger "No We Didn't Really Just Do This Same Insert Set Three Years Ago" cards came from Jeremy of Topps Cards That Never Were.
He also sent the Bellinger at the top of the post and the one here below: 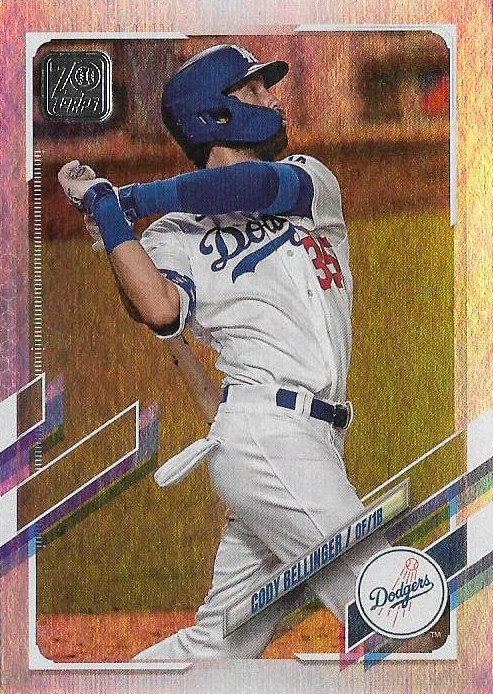 That's the foil version that doesn't look nearly as good as this scan.
Jeremy's accompanying note said, "Hope you can use MORE Bellinger cards."
OK, so he didn't really emphasize "more" like that.
And, yeah, I could use them, although I'm not exactly deficient in the number Bellinger cards in my collection.
He's been in a Dodger uniform only since 2017 but just a couple of months ago I mentioned that Bellinger had reached 25th all-time in terms of which players have the most cards in my collection.
Bellinger is now 18th on that list with 221 cards total.
I don't actively search out Bellinger cards, they just arrive in trades for Dodgers or simply fall out of the packs that I buy. There are so many of them. In two years -- barring injury or trade -- I will likely have more Bellinger cards than cards of anyone who isn't Clayton Kershaw, Mike Piazza or Hideo Nomo. That's how quickly Topps is making cards of the guy.
The alternative, some Brewers or Twins fan will say right now, is having Topps make no cards of your players. And I realize that.
But, honestly, the exact same thing every three years?
I don't need that. I've done it already.
Well ... I've been meaning to do it anyway.

Brett Alan said…
They did Alonso and Betts as well. I don't even have a single card from the Alonso set, because it came out after I stopped going to shows for COVID reasons. Betts I have a bunch of because they were in dime boxes.

They never do veteran players, who would actually have enough interesting moments to make the set make sense. A Pujols or Miggy or Kershaw set would make a lot more sense, but it doesn't happen. Also, when Gio started doing "Minor League Days" cards on When Topps Had (Base)balls, I mentioned that if you're going to do a set of 30 cards of a guy who's played two seasons in the majors, they should put in some minor league cards for variety's sake, but they don't. At least that All-Star game card shows a different uniform.
April 11, 2021 at 8:48 PM

bryan was here said…
Topps did a Bryce Harper "Welcome To Philly" subset a couple years ago. I,too, would like to see some other worthy veteran get the treatment, and include their minor league days as well.
April 11, 2021 at 11:15 PM

Nick Vossbrink said…
Now that Topps has Mantle back in the fold I'm looking forward to Heritage having a 20-card Mantle set every year.
April 12, 2021 at 12:57 AM

Anonymous said…
Meanwhile, Caleb Thielbar is approaching a decade of service without a big league card...
April 12, 2021 at 5:29 AM