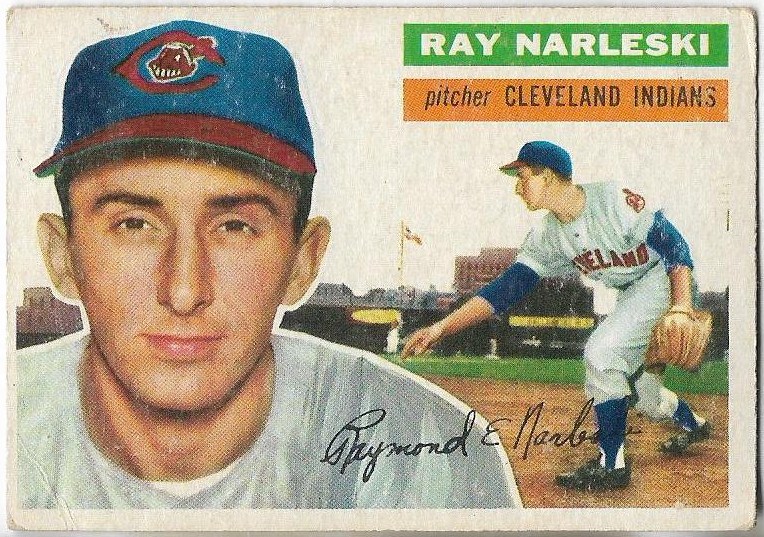 I found this card sitting behind an upgraded version of the card when I was pulling all my 1956 Topps cards out of the binder for my completion post the other day.
I had no idea it was there and it's kind of neat to have another '56 dupe again -- I think I've traded most of the others away.
I'm now in the process of returning those '56 cards to their forever home and taking my time with it. Because, really, once that's done, I'm done with the '56 set for good and then, now what?
That's a very real feeling when you accomplish a task on this kind of collecting level. 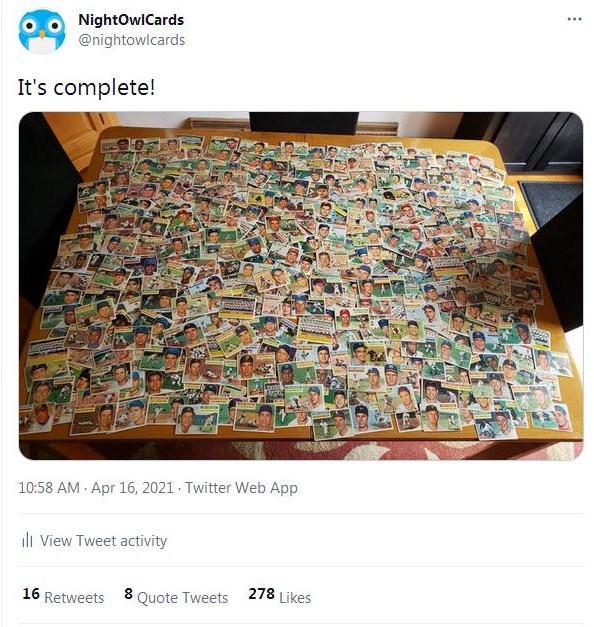 I think most collectors understand the achievement. This is my most-liked tweet in nine years on Twitter, and I can't imagine any collector not clicking that "like" button, you'd have to have some kind of issue.
Out of all the comments on this tweet, there were lots of congratulations, a few really weird responses (there are always those people) and a couple of "don't forget about the checklists" comments (there are always those people, too).
But what the "don't forget about the checklists" people are actually saying is: "now what?"
So, yeah, right. That.
Well, looking forward, I think finishing the '56 Topps set means I'm done with the periodic '56 of the Month" posts that I've written for the life of the blog. There doesn't seem to be much of a point anymore. I like researching stuff about the subjects, but the posts don't get a lot of readers and that's a lot of work for little return, even if I learn something.
I'm probably done with trying to complete a set that came out before I was born. I'm just not interested in those older '60s or '50s sets and definitely not anything before that. Even something like '59, which I like a lot, is not anything I see on the horizon. I'm sort of relieved though. I can axe out some serious spending.
But the "now what" includes the current feeling that I've now finished all of the Big Sets In My Life.
I'm done with them. I completed the 1975 Topps set and the '75 minis. I completed all of the Topps sets from my childhood all the way until young adulthood. I've completed sets that came out before I collected but I remember seeing all through growing up, 1971 Topps and '72 Topps and '73 Topps. And now, the '56 set -- the biggest dragon since I was a teenager -- has been slain.
What's left? There is nothing out there that I feel a burning need to complete.
Sure, since I don't have to squirrel away cash for expensive '56 cards, I can devote stuff to expensive 1970 Topps cards, like Bench and Ryan. Or, crazy expensive cards in the 1967 Topps set.
Or, if I just want to relax the wallet for the next several months, I can continue collecting oddballs from the '70s because those are always fun things from the kid era. 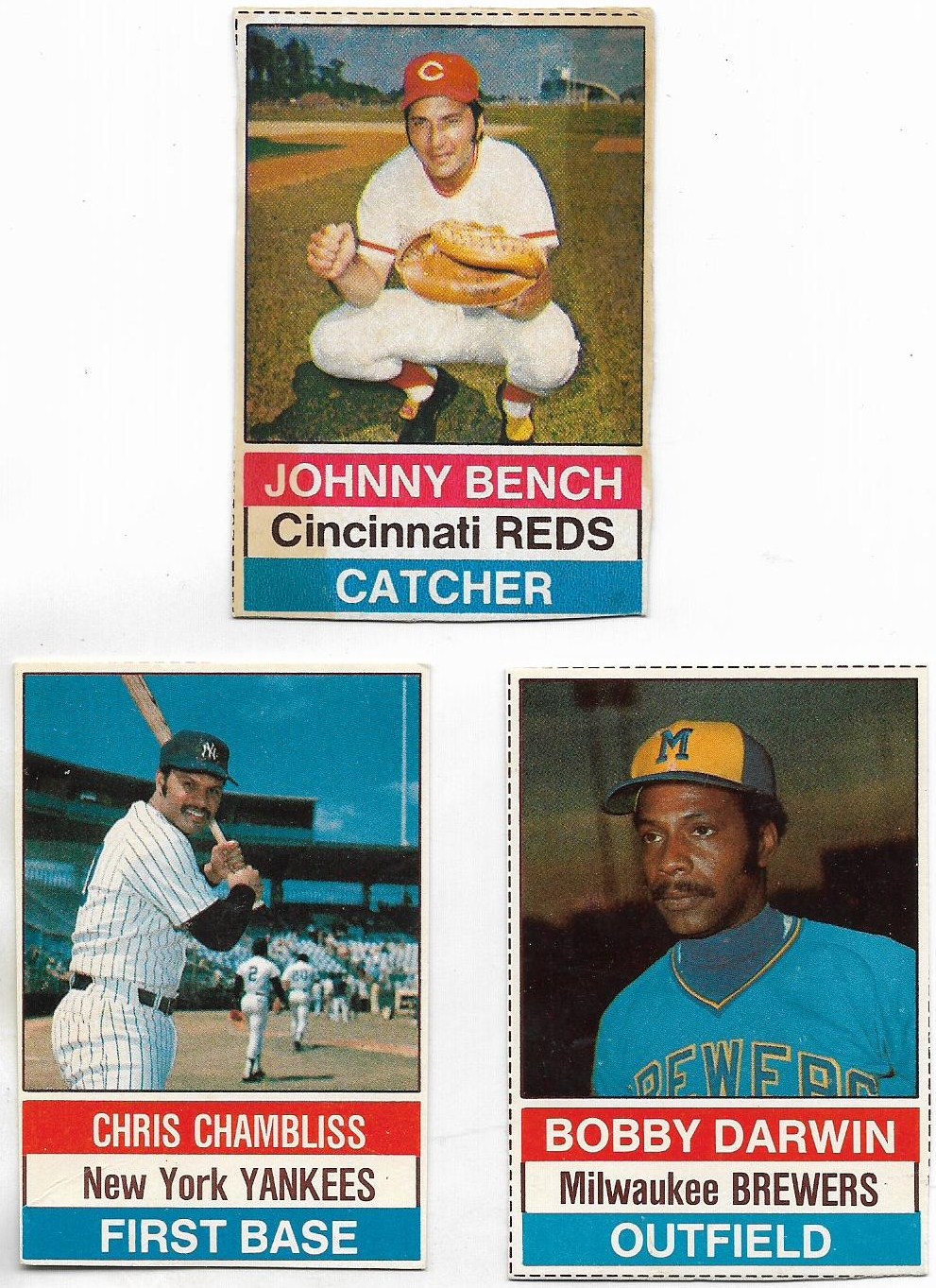 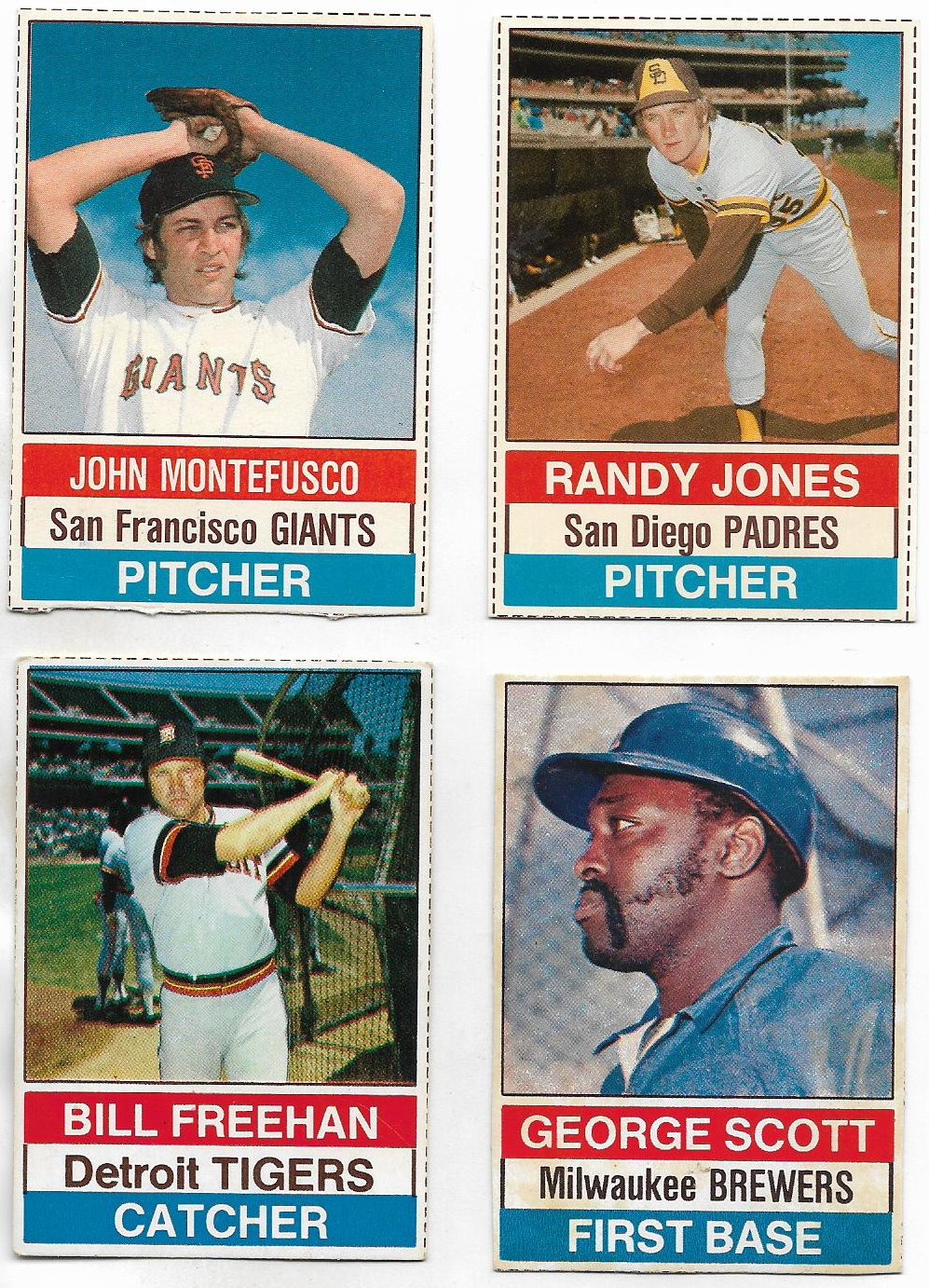 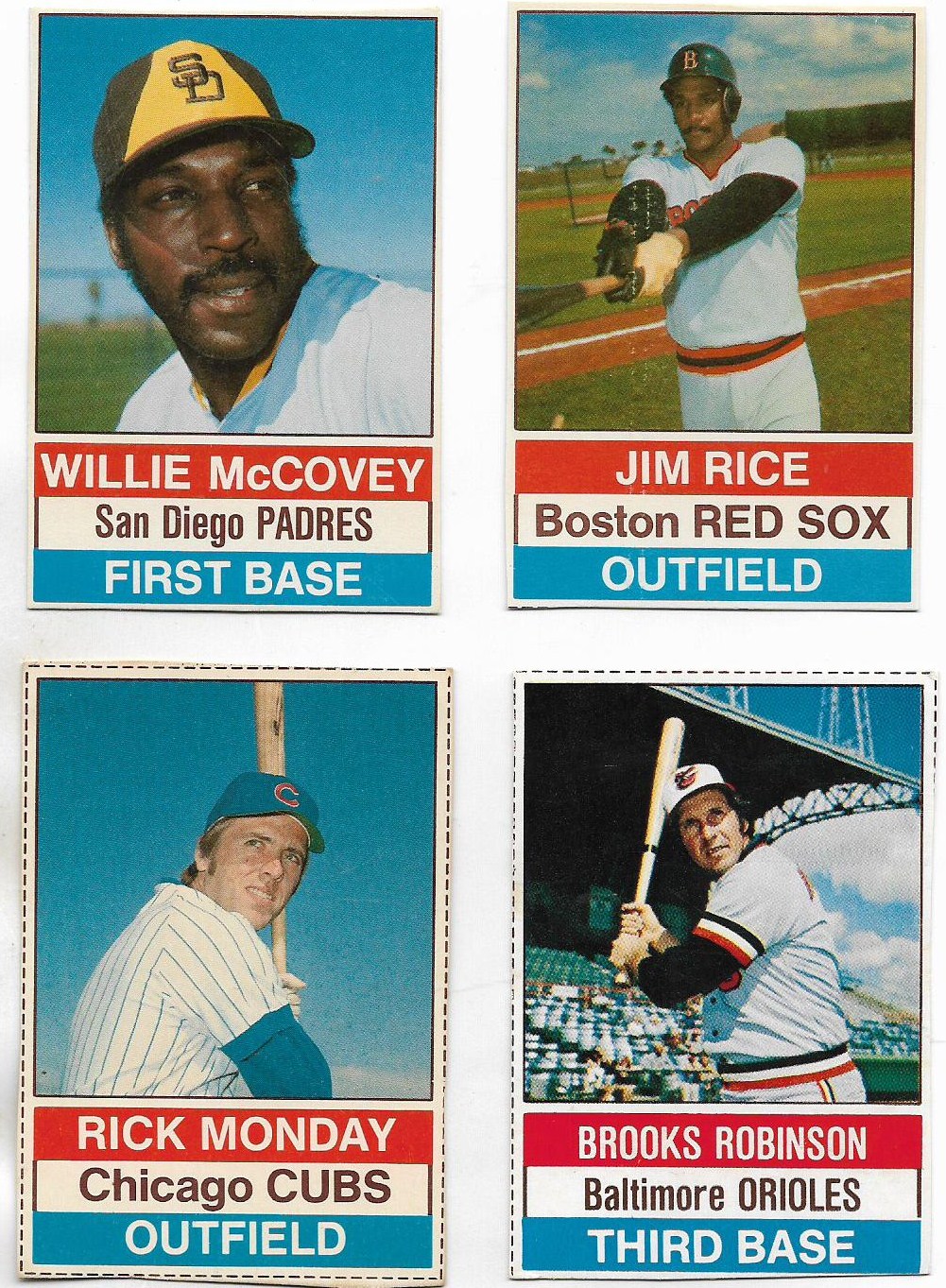 I just added some more 1976 Hostess cards to my growing set and there's another group on the way. I've been enjoying learning the many nuances of the Hostess cards, even if I can't be bothered much with the brown backs and black stripes and all that.
I'll continue chasing Kellogg's cards from the '70s, stepping up my bids for cards from the '75, '79 and '80 sets. And I can finally commit myself to getting those '80s Fleer sets finished. 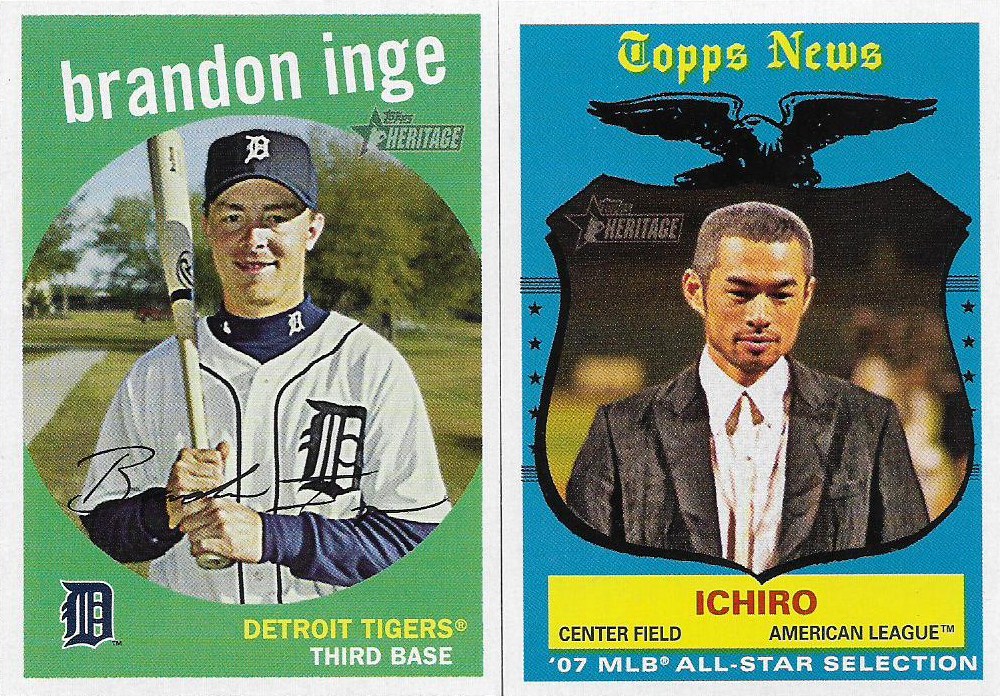 And here's something. After putting the dumb Heritage short-prints from the 2008 set on the back burner for ages, I've started picking up a few again. I'm down to the final five.
I will always have some kind of card set to chase. I will always have a list, that's not going away.
But that child-like thrill, that decades-long yearning to finish a particular set that meant so much to me when I was 12 is probably gone now. That's a bit sad. Part of me thinks that might kill my enthusiasm for collecting a little.
But the collector in me is probably safe and still strong.
So let's go.

Old Cards said…
This post made me look at your want lists for cards prior to 1980. As far as "now what?", as a follower of your blog, I am looking forward to your completion of the 1967 Topps and 1970 Topps sets, probably as much as I anticipated your completion of the 1956 set. Easy for me to say since you are footing the bill for those expensive cards, but, nevertheless, I will be watching for any progress you make and hoping you find some bargains.
April 18, 2021 at 9:28 PM

Billy Kingsley said…
You could always tackle the project I'm working on in the NBA, NHL and NASCAR: (at least) one card of every person to ever get one.

It would be an exceptional challenge for the MLB, since you have such a large roster, a longer history of cards and perhaps most importantly, your sport is actually fully covered on cardboard. Since you've built such an impression collection already you'd have a good base to work from.
April 19, 2021 at 3:30 AM

Michael Ott said…
Sounds like you still have plenty of quests to keep you happy.
If you ever change your mind, I could give you a jumpstart on 64.

Matt said…
That was a heck of a chase though. I have so many chases that I wished I felt a sense of completion. It seems I finish one set just to move onto another. Of course mine are nowhere near comparable to 56.

gregory said…
Take a couple of weeks away from the "now what?" question. You know, like the way athletes take time away from their sport after they win a championship. (Because finishing that '56 set is pretty much the same as winning a championship!)
April 19, 2021 at 11:42 AM