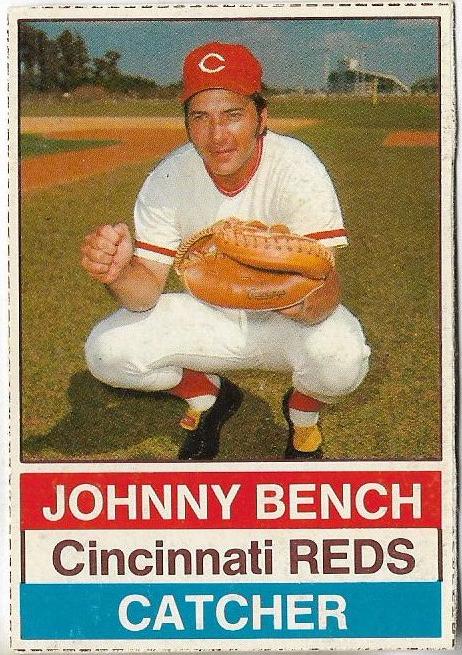 Twitter, I don't need to tell you, emphasizes the negative.
I think it comes with the territory. It's a social media forum that broadcasts people's thoughts and views indiscriminately. My grandmother often said, a long time ago, that "fools names and fools places often appear in public places," and that was uttered way before the internet. But she was so on point.
Obviously, I'm one of those fools. I try to be nice and I try to be positive, and I often fail. I also try to be honest and I think I do a better job on that than the others. I see a lot of dishonesty online and on Twitter in particular and it bothers me quite a bit.
Twitter has been filled with hobby dishonesty lately. There is the flipping mentality and the folks who try to tell you there is nothing wrong with it. There is the NFT craze with folks trying to convince you that you'll get rich off of digital images. There is so much dishonesty in that, and that's when I fail at being positive and nice.
Twitter is so filled with that stuff, in fact, that Sooz, the former card blogger/former Beckett writer/former Topps employee who is back in the hobby again, geared her popular Twitter CardChat feature toward hobby positivity this week.
Her questions included: What is the nicest thing anyone has ever done for you in the hobby? What is the nicest thing you have seen someone do in the hobby? What collectible company has been the best at spreading kindness in the hobby? Who is the kindest collector you have met (physical meeting not necessary)?
I didn't have a lot of answers for these questions, I admit. I felt guilty about that because when it comes to one of the CardChats where it invites critical answers, I'm all words.
I need to work on that. But also, I think I was stumped for answers on the kindness questions because I know the Blogging hobby. I've known it for a dozen years. Twitter likes to think that it has the kindest collectors and, yes, there are plenty of them. But Twitter has no idea. Blogging kindness is off the charts and is a tradition unmatched by any other medium when it comes to collecting. I might add that some of the most well-known Twitter card kindness folks were/are also card bloggers.
So, when Sooz asked, "What is the nicest thing anyone has ever done for you in the hobby?" I thought, "my gosh, how in the world do I answer that question?" There have been SO MANY. Hundreds. Yes, hundreds. Literally hundreds of kind hobby gestures for the writer of this blog.
My blog is full of those stories. If anyone wants to see hobby kindness, read up. It's all there. Somebody sent me a '56 Koufax just because. Somebody sent me a '56 Yogi just because. Somebody sent me a '56 Feller just because. Somebody sent me a '53 Bowman Color Pee Wee Reese just because. Somebody sent me two entire card albums full of cards just because. Somebody sent me a Yasiel Puig rookie when he was the biggest, hottest star on the planet just because. Somebody accumulated cards for an entire year and then sent them out to anyone who asked just because. During the peak of the pandemic, bloggers decided to offer up free cards on Fridays just because. Several people sent me cards after my parents died and I can't think of a kinder gesture.
That is just off the top of my head. There is so much more -- I feel stupid for leaving it all out because it's so crazy it needs to be recognized.
This hobby is full of kindness, that's been established. But hobby blogging kindness? You can't match it.
Some of those kind folks have moved on. A couple have even passed on. Then there are those who keep showing their generosity like clockwork, at least a couple times a year.
Dave has sent me wild cards beyond my imagination dozens of times. He did it again a couple of weeks ago. He sent me the 1956 Topps Pirates team card because it was one of the last cards I needed in the chase for that set.
But he didn't stop there. 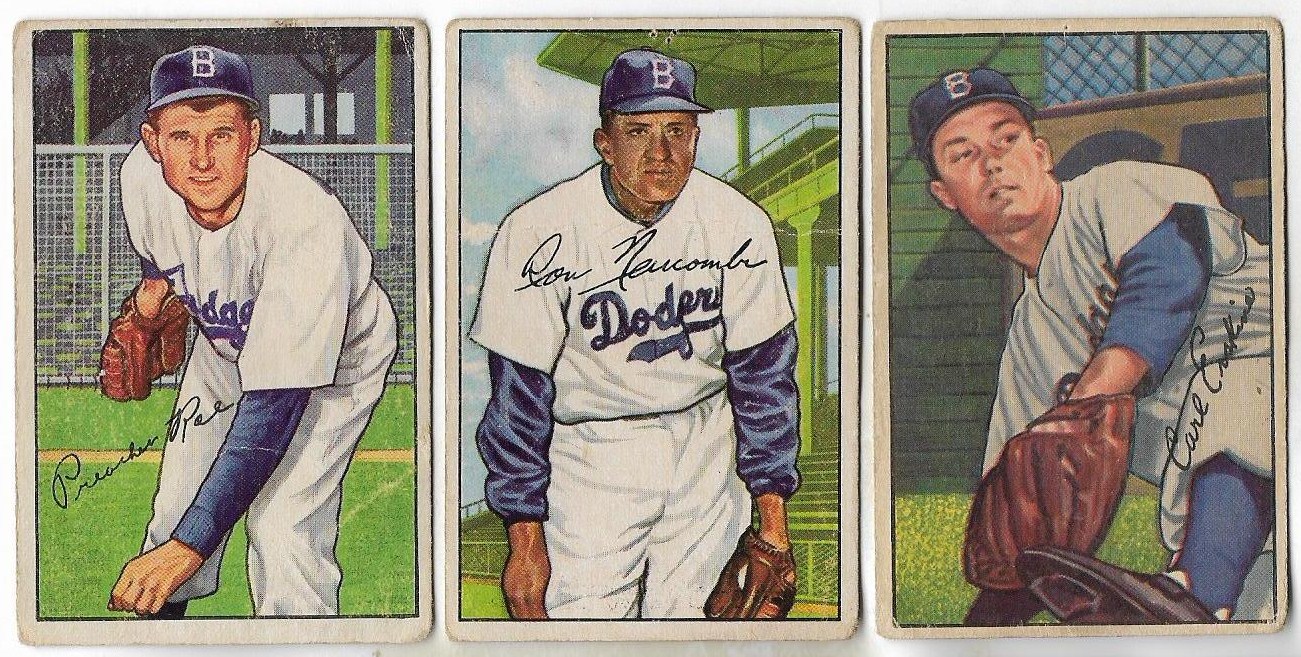 The package included three 1952 Bowman Dodgers off my want list. This is hobby generosity right here, Twitter! This is my example, CardChat!
The '52 Bowman set is just beautiful. I wasn't aware it was so packed with Dodgers cards. I thought I've done pretty well with this set and there are still seven to go! 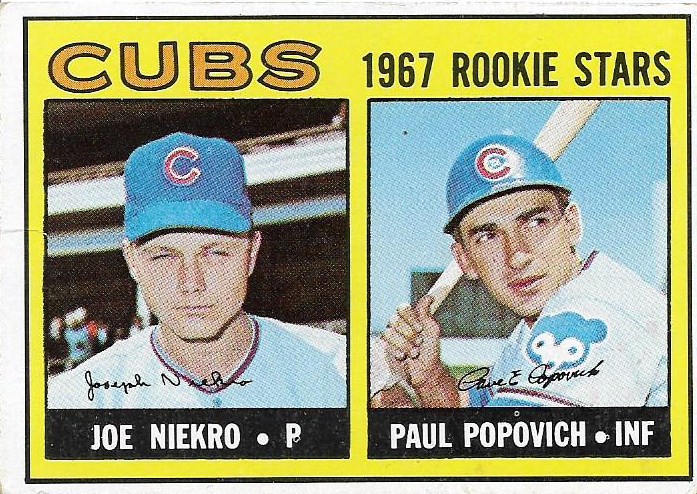 Dave wasn't done. Here is a high-numbered card from the '67 Topps set I am allegedly collecting. These are not easy to find for reasonable cash quantities, let alone receiving one for free. 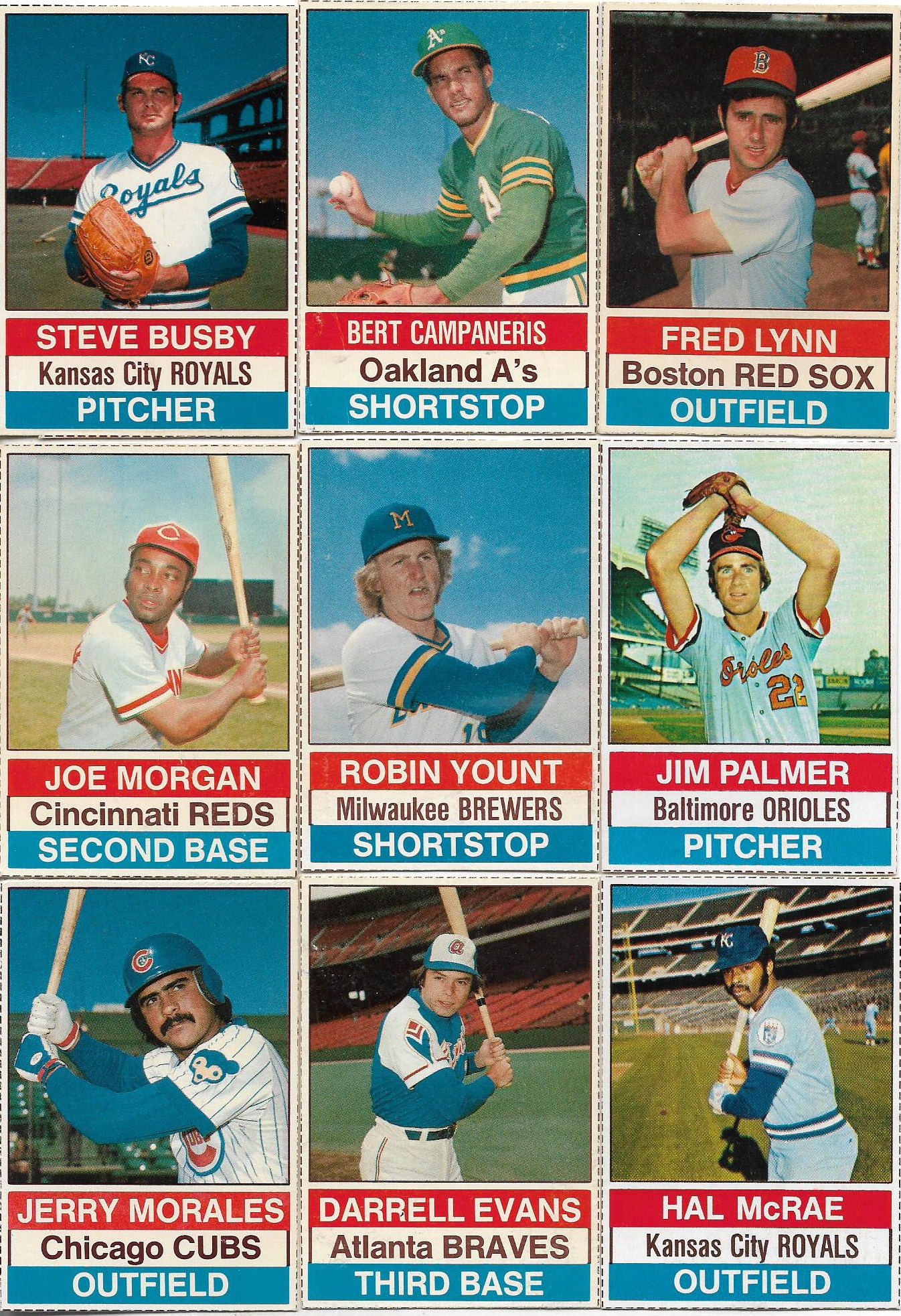 Then there is this. A bunch of prime-condition 1976 Hostess cards for my set completion quest. It doesn't seem to matter what set I'm collecting, Dave pops in on queue with cards tailored for my particular mission. 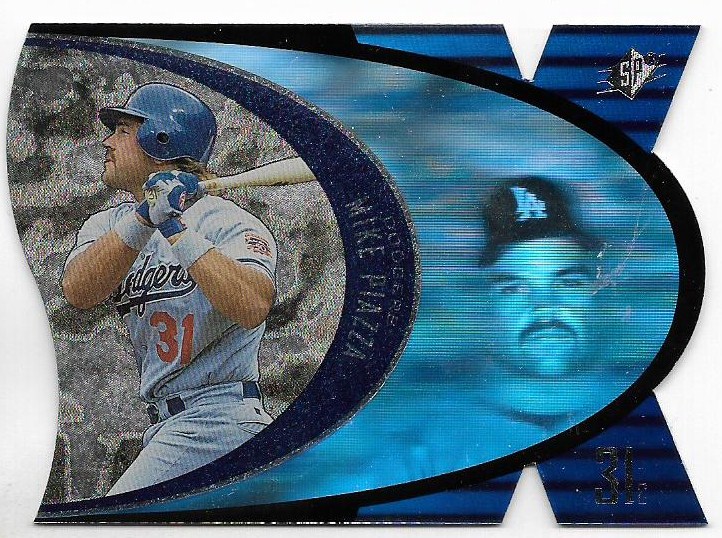 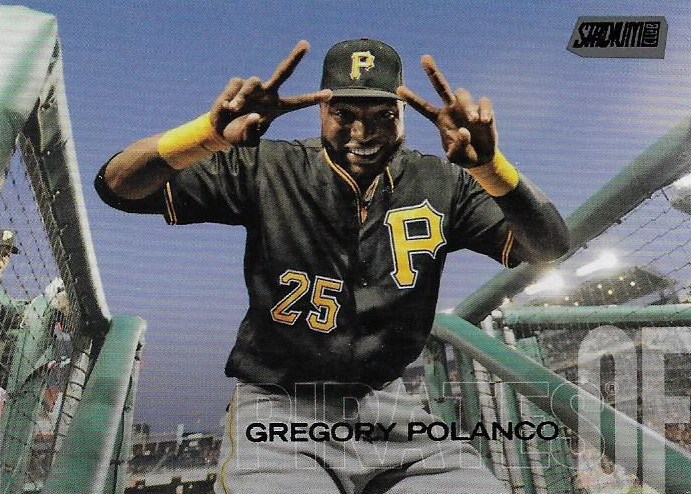 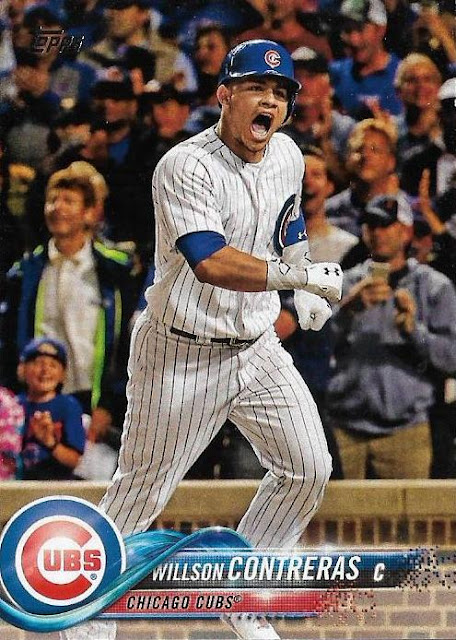 He didn't forget some other collecting pursuits either, like Dodgers and night cards. I'm a bit embarrassed to say that I've lost track of where my night card binder is.
I was looking to see if the above two cards made the frankenset (the Polanco damn well better) and I couldn't find the binder! I've recently shifted around some binders to eliminate a couple of overstuffed ones that I've had. That caused me to move the placement of some binders. And that was enough to confuse my brain! 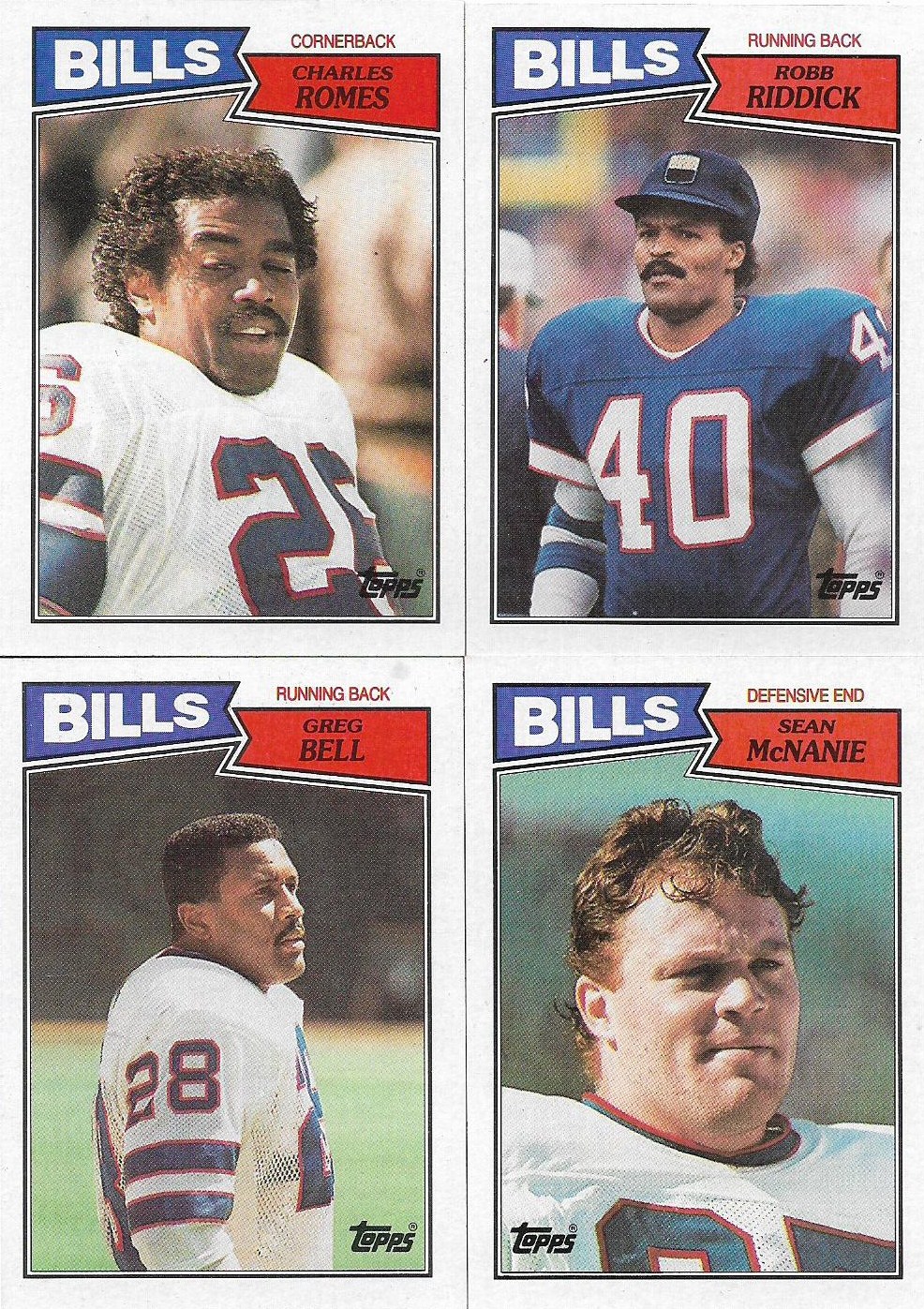 Dave is always good for some Bills and Sabres, too. I ignore late '80s football as if it's done me wrong, but it's not so bad. These '87s are all new. 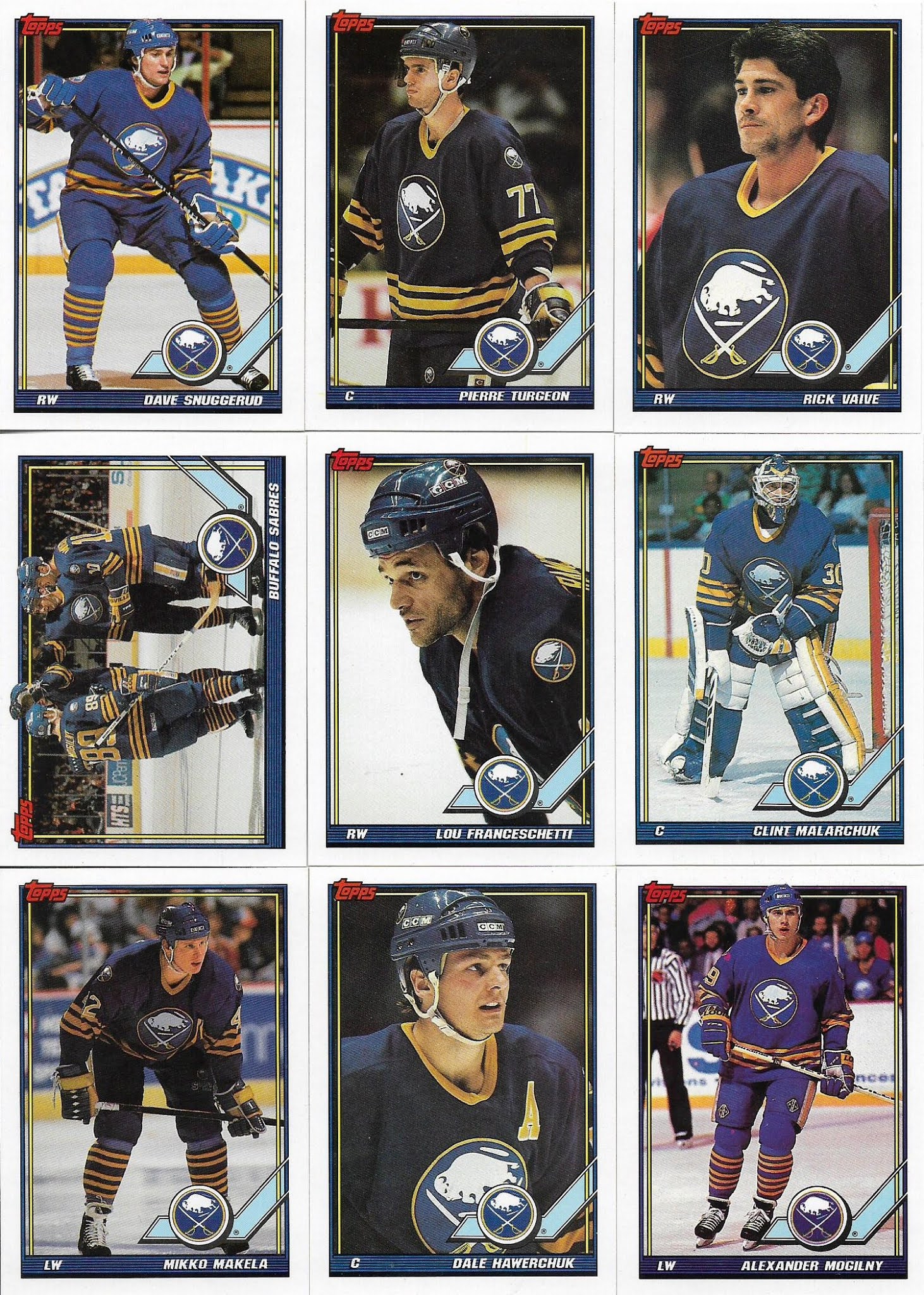 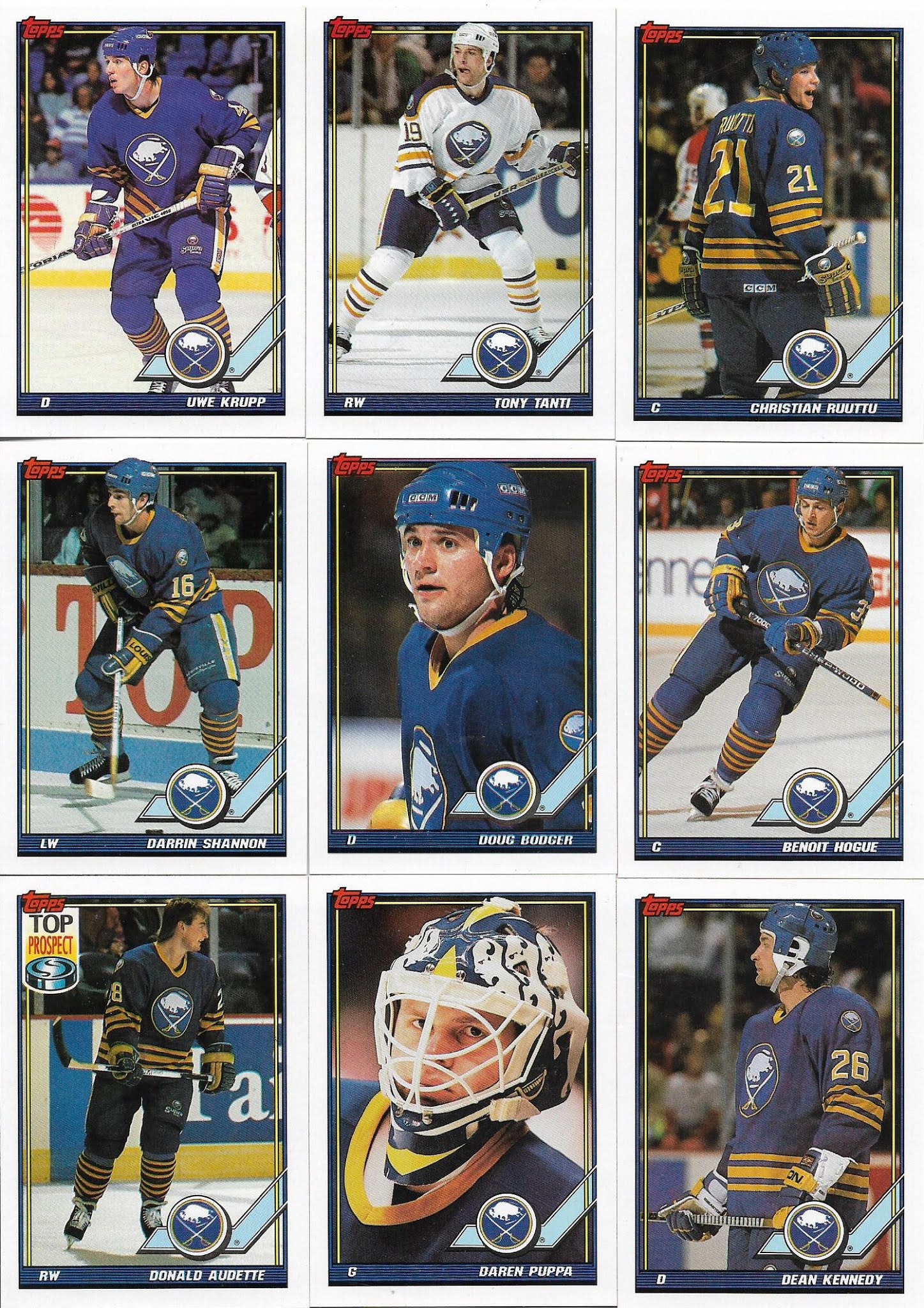 I think he sent me the entire 1991 Topps Sabres set, too (this isn't all of them). This is right when I knew every single Sabres player, which hasn't been the case for many moons.
The best part of the '91 Topps hockey set are those gleaming backs: 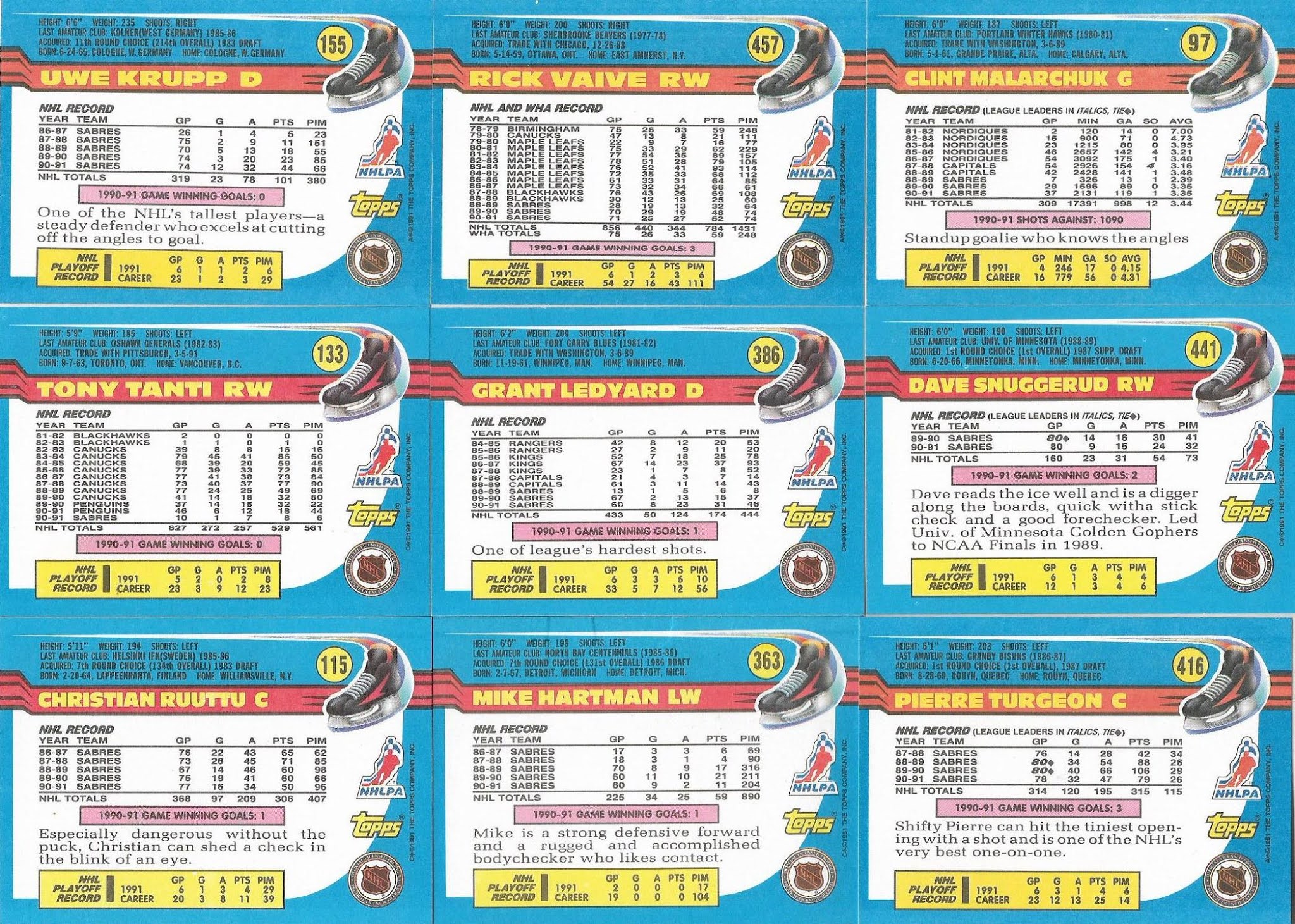 Hockey card collectors were so lucky. Baseball was stuck with those dull gray backs in '91. Yeah, I know that's what we liked back then, but I sure would've gone for something like this on my baseball backs at that time.
So, there you are. That's just another example of good in the hobby. Dave doesn't blog (at least that I know of), but blogging does attract that kind of generosity.
Twelve years later, I am still citing examples and maybe I can't come up with them when Twitter asks me a question but that doesn't mean I'm not grateful.
It means I've just won an award and I'm at the podium in front of crowd of my peers, holding my Oscar and now I'm trying to think of everyone to thank. It's a bit overwhelming.
Thanks again for participating in the best part of this card hobby. The blogging part.

bryan was here said…
It's awesome that little RAOKs (random acts of kindness) are prevalent in many different collecting circles. I'm sure the people who sent you cards probably enjoy it as much, if not more, than you do receiving them. Kindness and generosity will get you places in this world.

My uncle and I have been doing this for almost as long as I've been collecting. Even recently, I found a Rocky Colavito card for his collection, and I'm always looking for Brett Favre cards, especially insert cards.
April 22, 2021 at 7:03 PM

Brett Alan said…
I don't think any hobby act of kindness has impressed me more than that time someone arranged for you to receive a birthday card from your favorite player and childhood idol!

Not having been collecting at the time, but knowing the 1991 baseball set well, it's so weird to me to see that design on hockey cards. You're right about the brightness of the backs being nicer.
April 22, 2021 at 7:31 PM

Nick said…
It's a noteworthy event when someone sends free cards to another person on Twitter, but around the blogs that's just the norm. That's why blogging will always be better. Where else are you gonna find people who send other people '52 Bowmans out of the goodness of their heart?
April 22, 2021 at 9:21 PM

POISON75 said…
Greetings:
Mr. Owl that Joe Niekro is a nice one you earned it. Like I mentioned in a previous blog comment not counting the Variants I'm down to 5 for my 1967 set. However I am not sure what you have if any but....recently I made a trade with a person in Nova Scotia,Canada that started me on my 75th birthday present to myself. That being he sent(more later on the way from him) 330 of the 1975 O PEE CHEE Baseball Set. Between the 1967 set & 1975 set those are 2 of the greatest sets we both agree upon being #1 in our collections. So what's the remainder for your buyback 1975 set as well your 1967 set.
April 23, 2021 at 2:52 AM

Anonymous said…
Sending hockey cards isn't kind. Unless the recipient is Canadian.
April 23, 2021 at 6:01 AM

Matt said…
I am amazed I don't recall ever seeing those '91 hockey cards before. Those are fantastic - better than their baseball counterparts.
April 23, 2021 at 10:57 AM

Fuji said…
I can't speak to the kindness, generosity, or even dishonesty on Twitter... because I rarely use it for its intended purpose. I mainly use Twitter to respond to direct messages and rarely if ever read "tweets" unless someone shares one with me.

But I agree that blogging kindness is off the charts. Answering the question about the nicest thing anyone has ever done for me in the hobby would be close to impossible... only because I'd feel guilty choosing just one. There have been so many generous and thoughtful gifts sent to me over the years. Plus hundreds of thoughtful and kind comments left on my blog. I can still remember the support I received from the blogosphere and readers of the blog when my mother passed away two years ago. I guess that would be a pretty good candidate for nicest thing people have done for me in the hobby.
April 24, 2021 at 8:37 AM

Jon said…
I'd say that you've been very fortunate over the years. Also, blog people are far superior to Twitter people in every aspect!
April 25, 2021 at 8:41 AM

Mark Hoyle said…
The kindness amongst the card community is amazing. Your one of my favorites to send cards too.
April 25, 2021 at 9:20 AM

Peter K Steinberg said…
Nice new cards!! The kindness seems unlimited in my experience though I know it's also kind of a subset thing. I'm sure there are unkind bloggers just as there are dinks on Twitter. But I love that there are really nice and kind people out there.
April 25, 2021 at 5:58 PM

Swing And A Pop-up said…
Don't know anything about Twitter because I don't use it...but I've heard very few positive things about it. I couldn't choose what has been the nicest thing someone has done for me in the hobby either but I do know that these bloggers that hang out here are by far the nicest I've met.
April 25, 2021 at 6:26 PM