Nothing compares to comparing 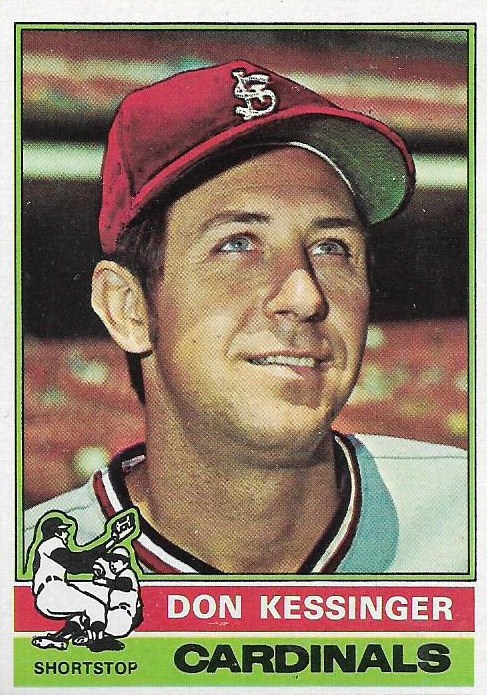 There's been a lot of moaning about not be able to go out and about, and when people are able to go out and about, they can't find what they went out and about for (i.e. baseball cards).
But when I think about it, I prefer it this way.
I actually don't enjoy going to stores that sell cards (or sold cards). My sole mission once I found myself inside a Walmart, aside from finding cards, is "how do I get out of here?" Target isn't any better. Slow people. Packs of people. Screaming kids. Running kids. Messy aisles, blocked aisles, people-filled aisles. Long lines. Judgy cashiers. Wind-blown parking lots. Crazy drivers in parking lots. I could go on.
I'm not a fan of most communal events. It's probably why I'm attracted to a solitary hobby. And I've found, in the last year, that I much prefer ordering my cards in the quiet of my home and then, once they arrive safely and without any potential for exchanging insurance information in the parking lot, I can contrast and compare the cards for as long as I own them.
I love comparing cards, noting the differences and discovering new elements you never noticed about cards that are decades old.
Recently I've been comparing the Hostess cards that I have been ordering. Since they are from 1976, I've been comparing them to the 1976 Topps set. Topps provided the photos for the Hostess cards that year so it's interesting what you can find.
For example, I've known about the '76 Topps Don Kessinger card with Kessinger airbrushed into Cardinals gear for a long, long time. 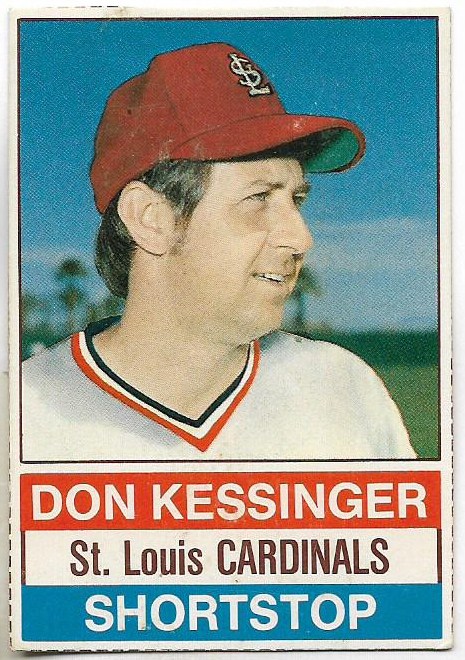 Newer to me is the '76 Hostess Kessinger card. But you will note that the hat and collar are also airbrushed and I would argue that the hat in the Hostess photo is much less apparent. 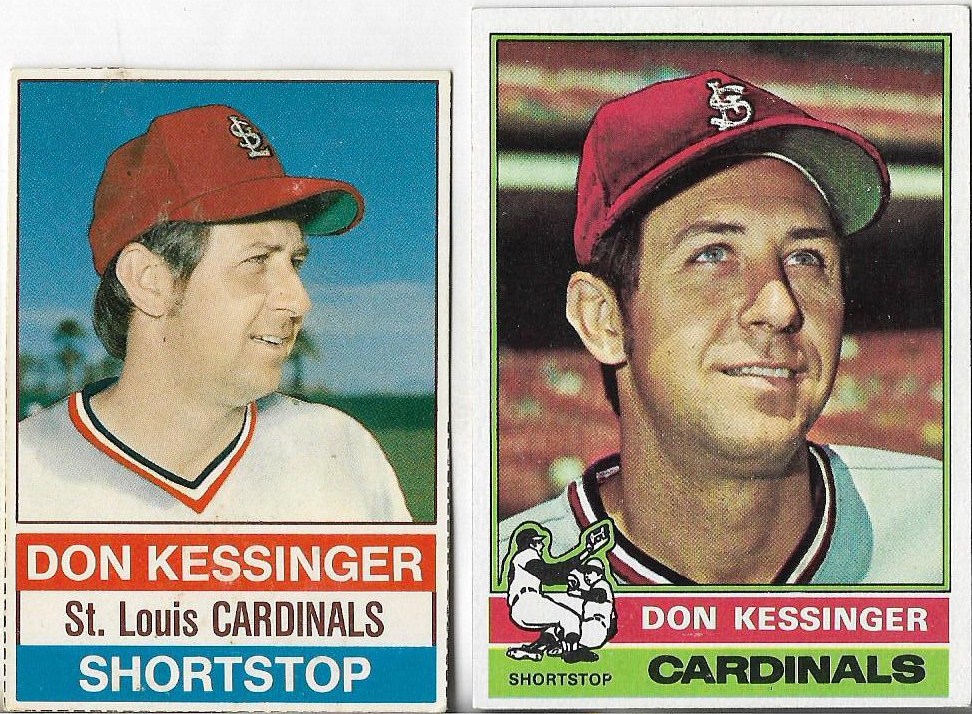 Here they are side-by-side so you can all compare for yourselves, because nothing compares to comparing.
Although both Kessinger photos received similar treatment, the location of each seems to be different, with the Hostess Kessinger at a spring training site and the Topps Kessinger at an MLB stadium.
However, there are other '76 Hostess cards with photos that are very nearly identical to the Topps picture from that same year. 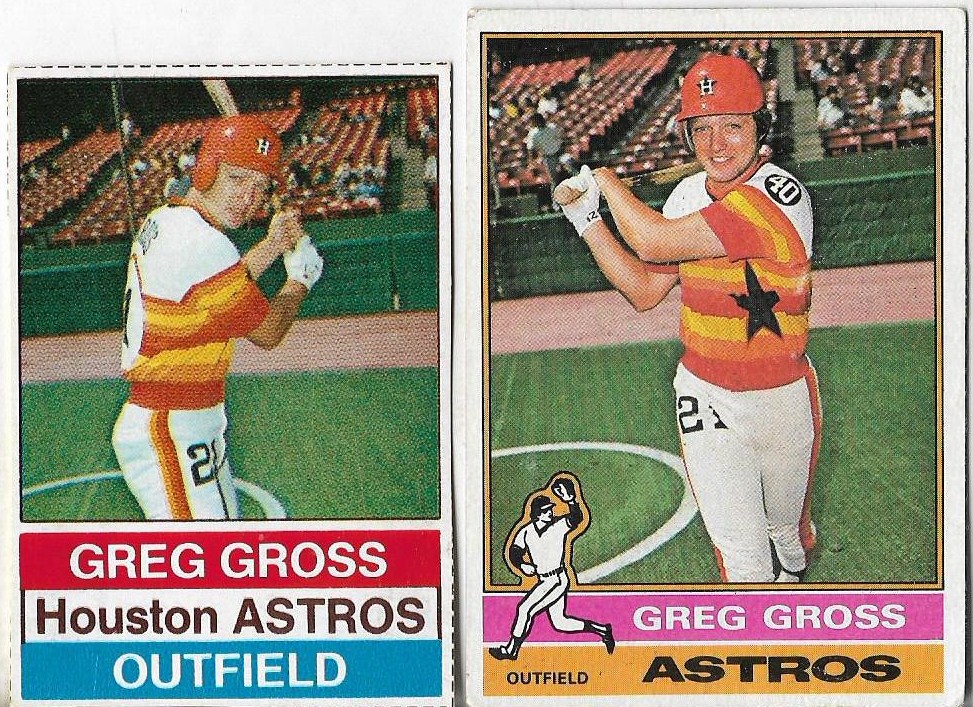 Greg Gross is posing with his bat at Candlestick Park on each card and it's almost certain that it's the same photoshoot as Gross is positioned just outside the batting circle in the same spot on each card. I don't necessarily see the same cluster of fans in the background, but these pictures couldn't have been snapped more than 10 minutes apart.
Gross appears to be wearing the uniform with the number on the back enclosed in a white circle. I don't know how long the Astros wore those uniforms, perhaps only in 1975, because all I remember is the number on the back being superimposed on the rainbow design that wrapped around the uniform.
And that's the kind of detail you get by collecting not just the Topps card but the Hostess card. 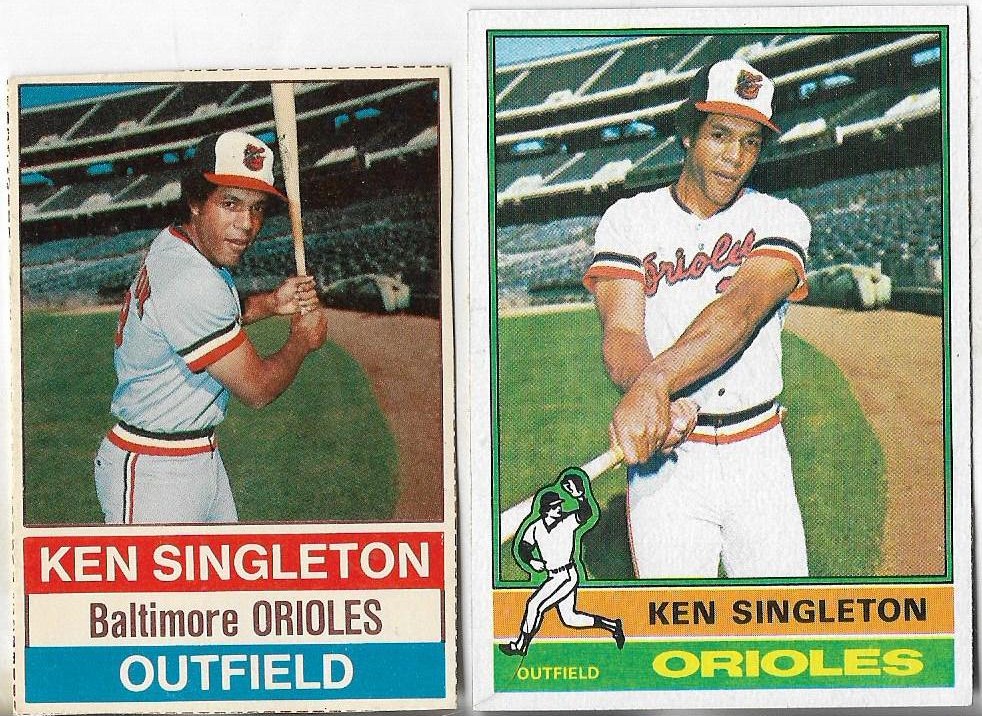 Another example of a different card, but definitely the same photo session. Ken Singleton is going through his posing routine at Memorial Stadium, I believe. The tinting on the Hostess card would have you think he's wearing a road uniform, but I believe that's the home uni and the same session because everything in the background is identical. (Nobody was cutting out backgrounds back then). 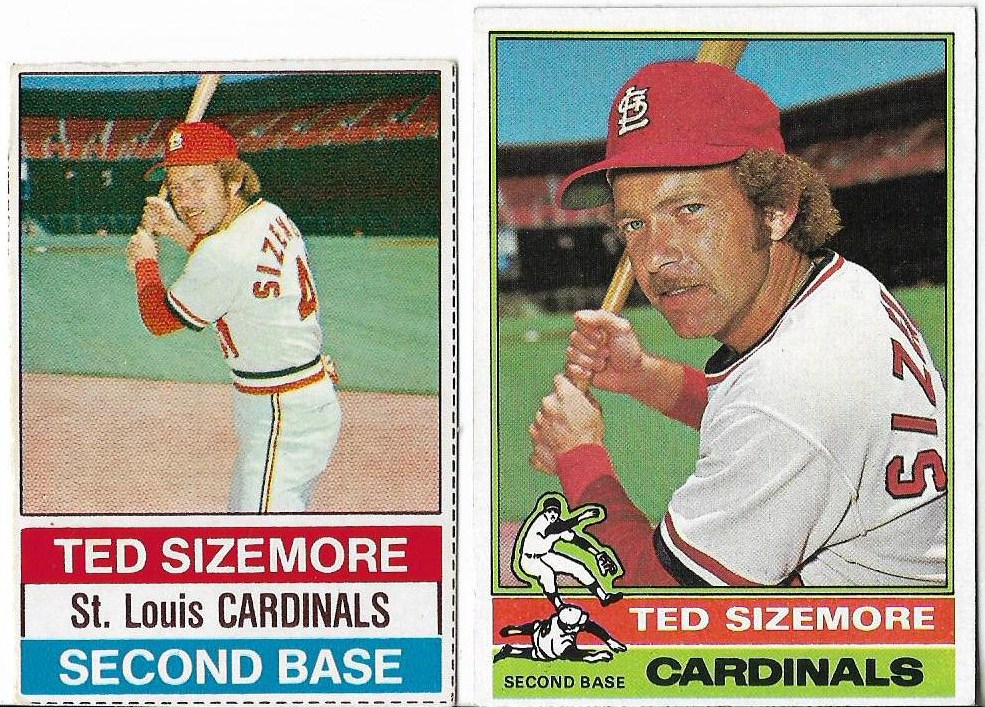 Here is another fun one with some interesting "spot the differences." Ted Sizemore is posing at Candlestick Park in both pictures and likely standing in the exact same spot, but Topps cropped in on Sizemore (probably at his request so the ladies could check out his perm). Sizemore is also displaying his serious side on the Topps card while more fun-loving on the Hostess. 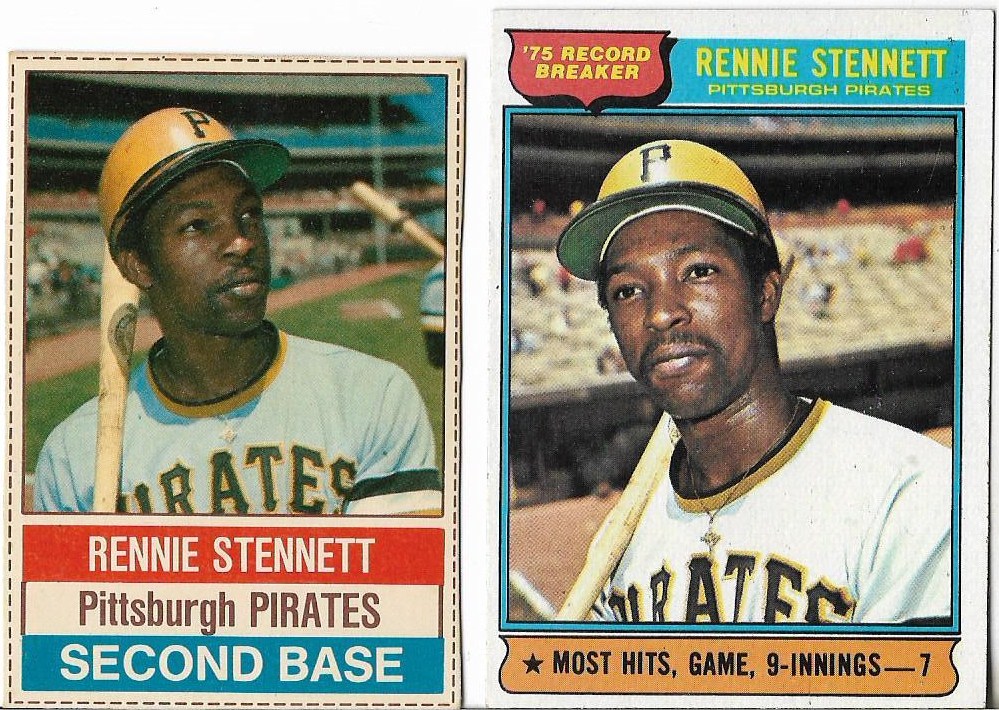 I like this one because Rennie Stennett's Hostess card is not most similar to his Topps base card from that year but his record-breaker card.
It seems like the same photoshoot in each case with Stennett wearing the double-hat combo and the same neck jewelry. He's got the bat on his right shoulder in each. But there is just enough different to make it interesting. It makes me wonder which photo was taken first. 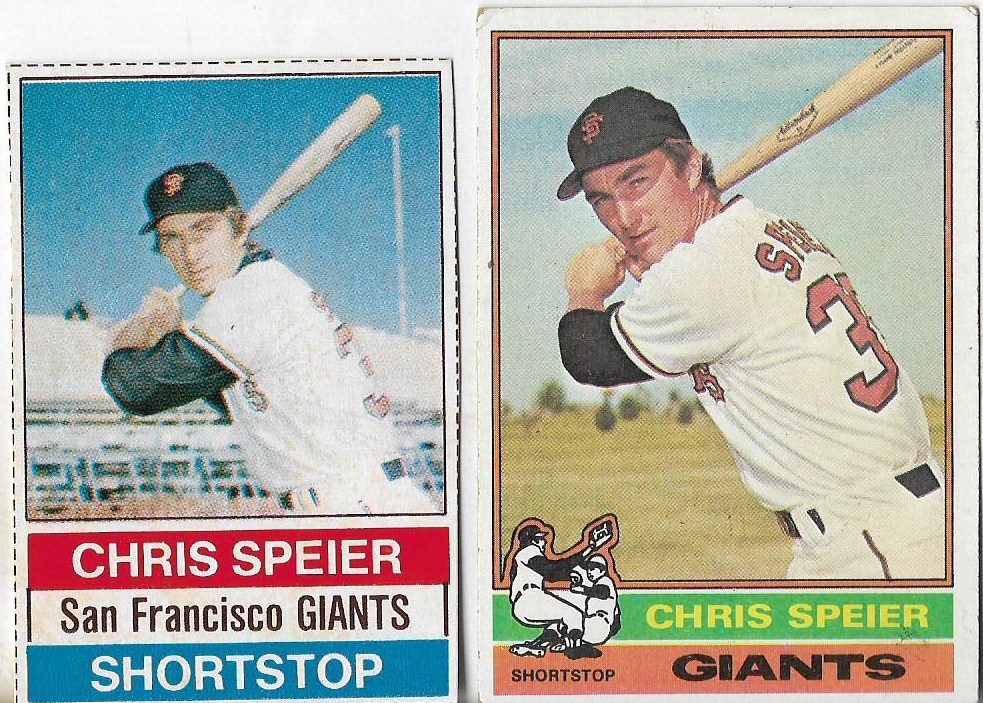 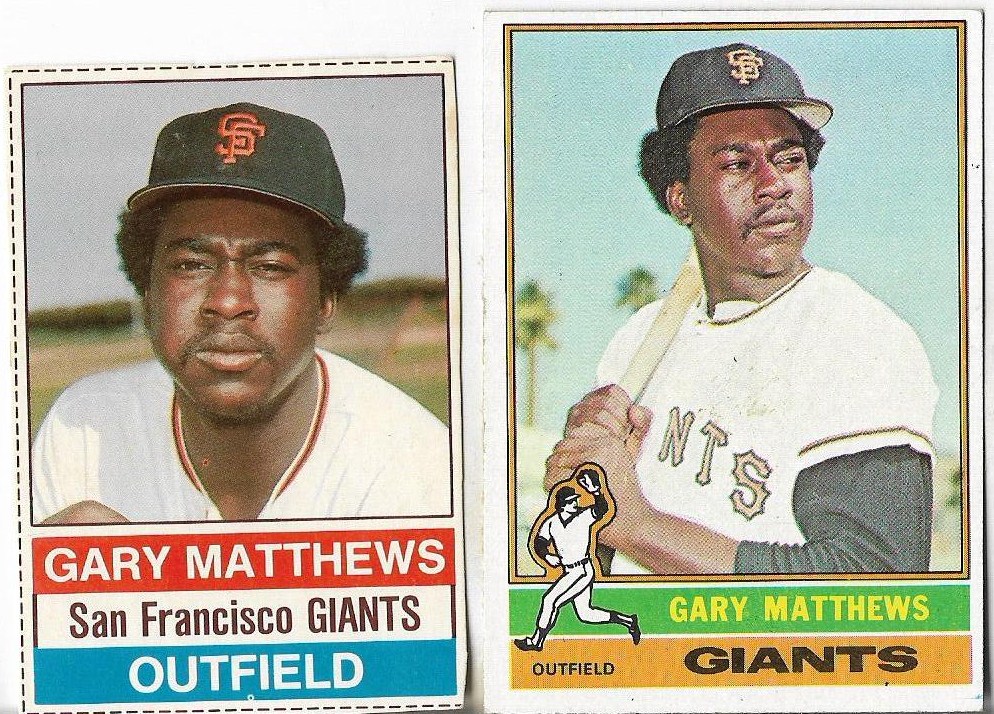 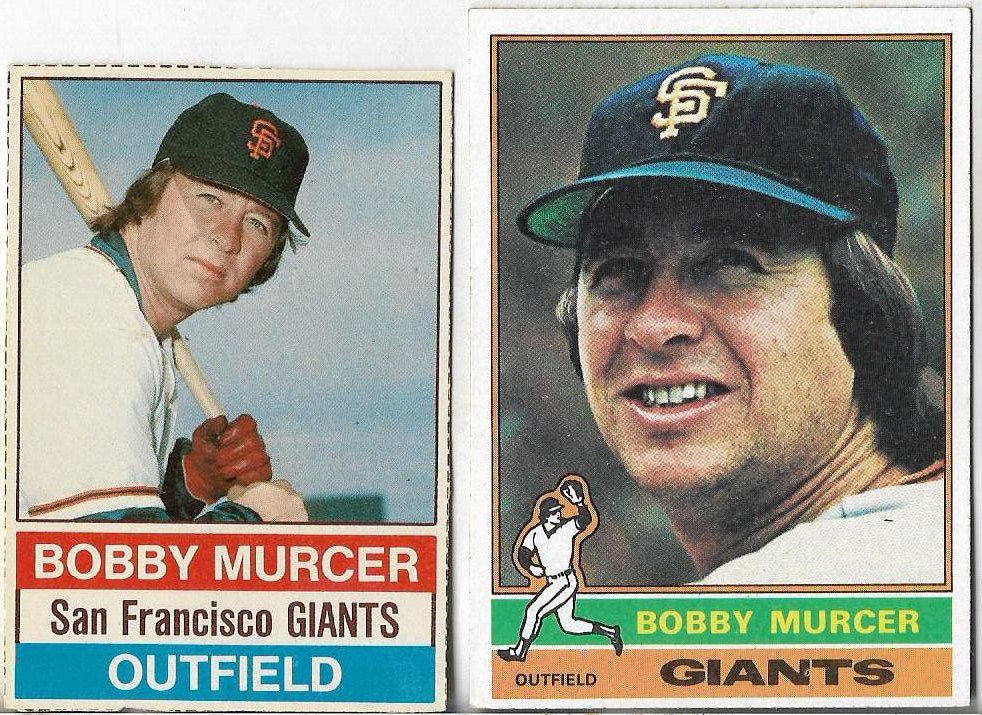 There are some Hostess-Topps comparisons in which both photos could have been taken at the same time but there's not enough to make a determination as in the case of these three Giants examples.
I've owned that Chris Speier Topps card ever since 1976 and it's always looked to me as if he's posing in the desert. It's a pretty good bet that both Speier shots are at spring training so they could have been taken at the same stadium, but likely not the same day (seems to be colder in the Hostess shot) and not the same spot.
The Matthews and Murcer each contain close-cropping and I couldn't tell you in either case. 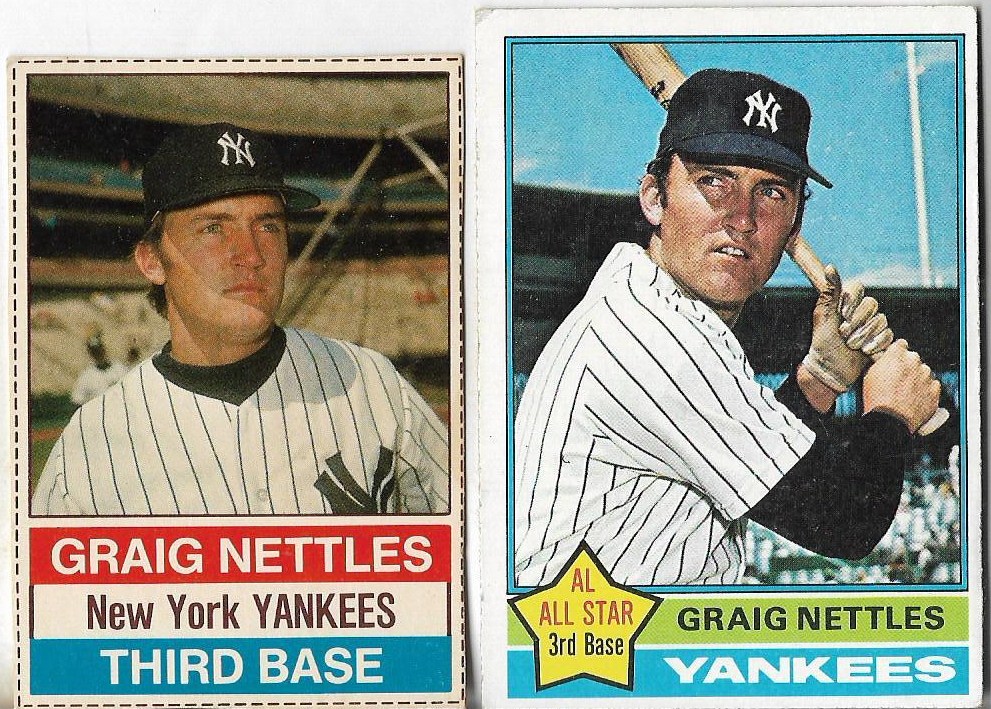 Graig Nettles seems to be wearing a lot of the same stuff in each photo but I don't think they're in the same place and are probably many days apart. 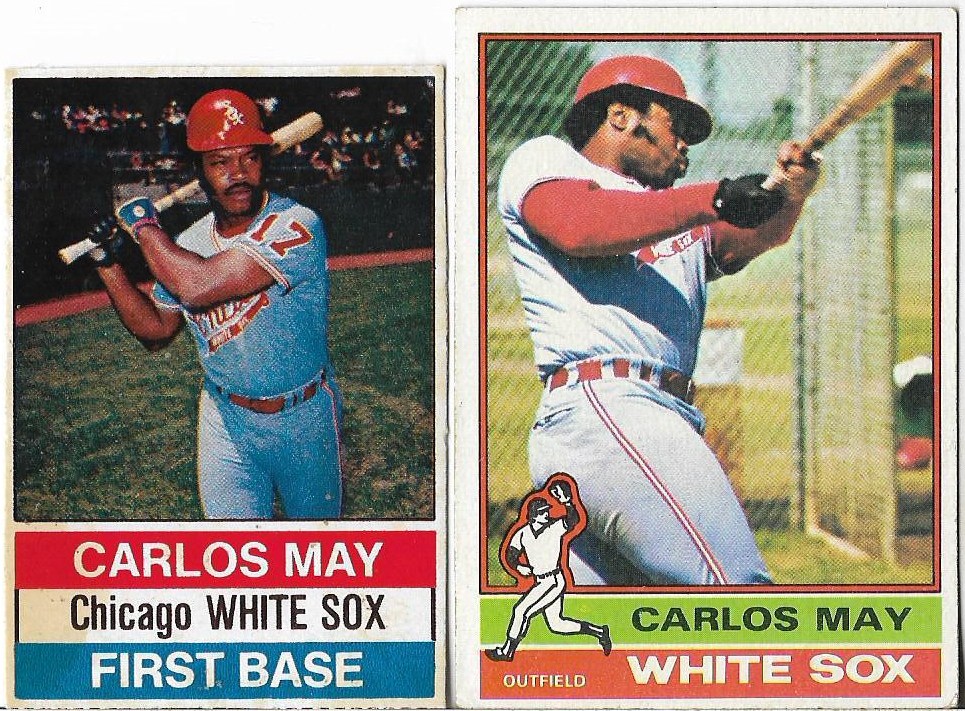 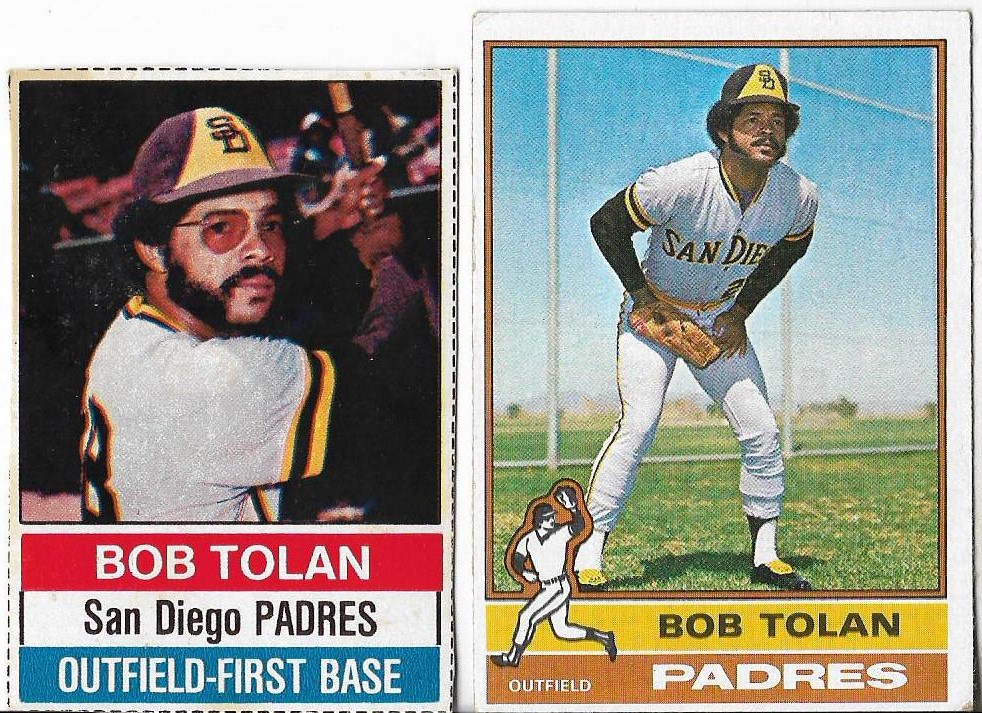 Same goes with Carlos May and Bob Tolan, although both seems to be wearing the same uniform in each case. 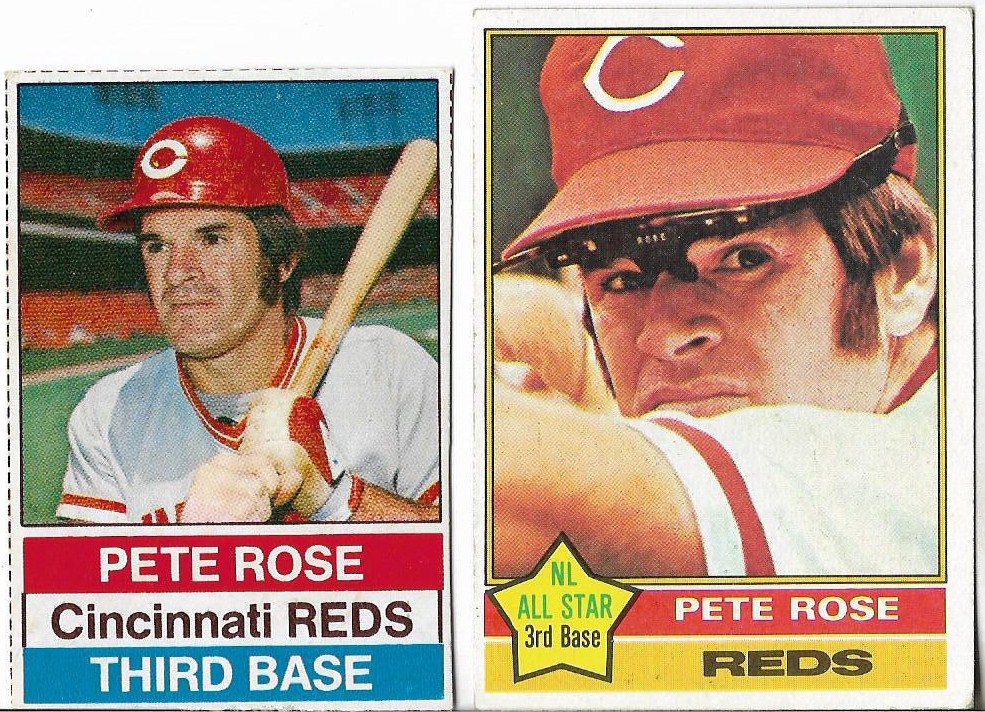 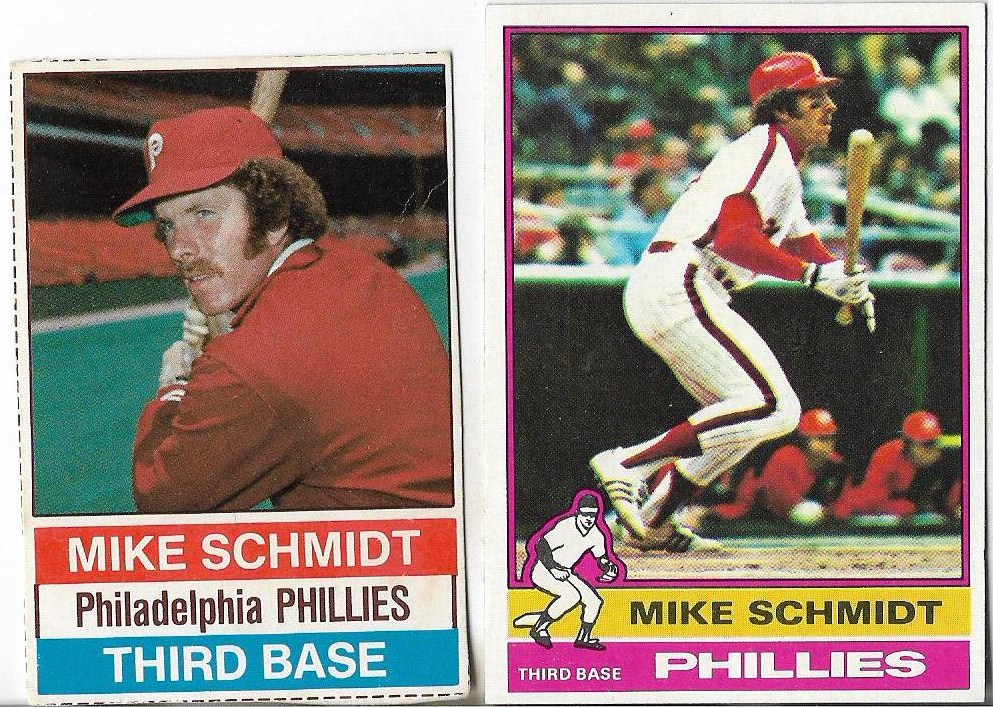 Then there are the cases of the superstars, in which Topps often seemed to have a special photo in mind for players like this. It certainly seems the case for both Rose and Schmidt, as those are two of the best photos in the entire 1976 Topps set. Also, I just don't see Hostess showcasing photos that are anything like that.
All of the Hostess cards that you see here came from my recent purchase of cards for my '76 completion quest. I've been focused on this particular mission a lot lately. But, still, I need 37 more cards to finish it, which seems just out-of-hand for a food issue from the mid-70s. I can't imagine how large kids would be in the '70s if every mom let kids buy as many Hostess snacks as it took to try to find all of these cards.
Fortunately, I don't need to eat that stuff, nor even brave the wacky shoppers at the big-box store to get my cards and do my comparisons.

The Angels In Order said…
Solitary hobbies are wonderful. I've been committing my time solely to my childhood hobby of model building. It was an escape for me then, and it is again now. I'd be happy to never leave the house again.
April 27, 2021 at 8:43 PM

sg488 said…
99 percent of my purchases are online just for reasons you stated, I love checking the mail hoping my cards have arrived,and I hate Monday holidays cause there is no mail.
April 27, 2021 at 10:41 PM

Fuji said…
My local Target rarely has cards. They haven't in years. But that doesn't keep me from going there... especially during the summer when we're not in the middle of a pandemic. I enjoy the stroll (gotta get my steps) and free AC.

As for cards... most of my purchases the past 13 years have been online or at local card shows or flea markets. But this past year, it's been purely online. I miss walking around the flea market... but after watching a YT video of a local card show... I've decided to hold off on going to one of those until the hobby settles down. I can't deal with rubbing elbows with hundreds of other collectors in person.
April 28, 2021 at 12:51 AM

Bo said…
Comparing the photos like that is a fun thing to do. (Perhaps another blog series?) The most fruitful time would be the late '80s when a player might have a base card, a sticker book sticker, a Topps Big card, one or two food issues, maybe another oddball or two, all produced by Topps and using their small corps of in-house photographers. More cards in the '90s but less likely to have been all shot by one or two guys. I've certainly noticed similarities within a year. Occasionally I'll even see a photo in a modern set like archives and realize it came from the same shoot as a card that appeared in the '80s.
April 28, 2021 at 10:44 AM

May and Tolan also appear to be spring shots in the Topps set, with photos in the big league parks in the Hostess set.
April 28, 2021 at 11:18 AM

Also, this is yet another note to myself to never again speculate on stadium sites on baseball cards because I always get it wrong and I am always told I'm wrong, often multiple times.
April 28, 2021 at 9:09 PM