I traded this for these 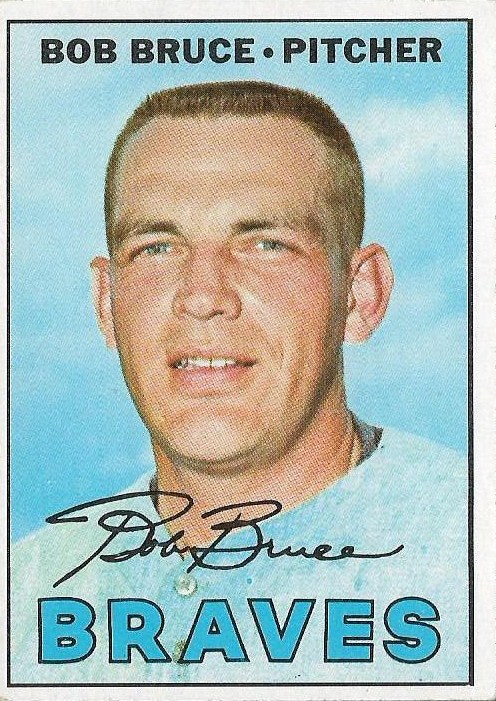 Like many folks, I've enjoyed the good fortune of a few extra funds lately. I've been a good owlie and dedicated almost all of it toward real life requirements and needs. I finally got that new roof so I can end years worth of hand-wringing over squirrels and rain clouds.
But I've also used some to gain some long-sought cards, which you've seen here over the last couple of months. And you'll see some more.
I also decided to grab a smattering of cards for trade bait. These are cards that I care nothing about but I know others value quite a bit. They are from that late '80s/early '90s period, and I'm not going to show them because I want to use them for when I think it's the right moment.
But probably the most coveted one that I grabbed -- no, it's not the '89 Upper Deck Junior -- is this one: 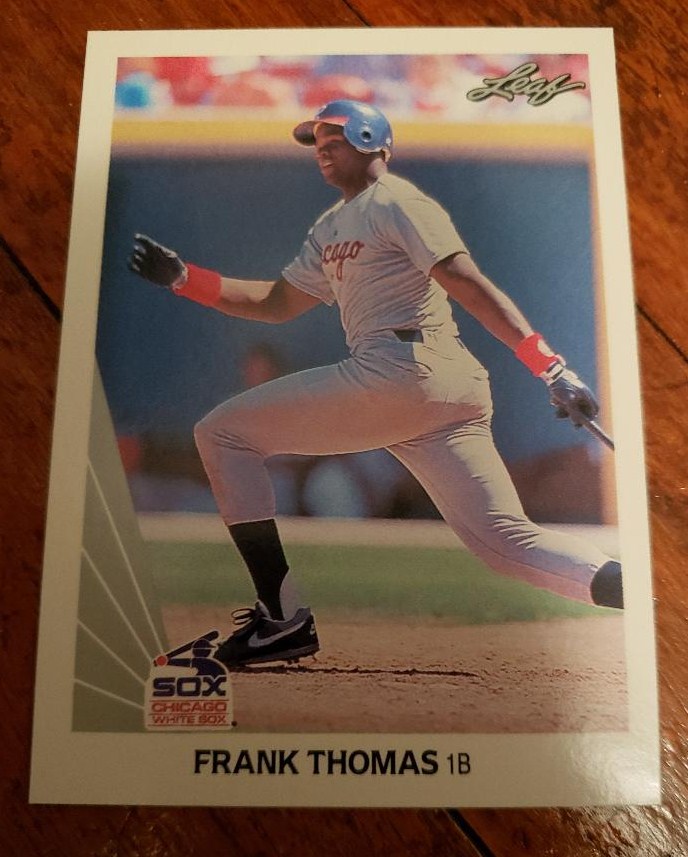 For those of you who ignore cards from this period, that's the 1990 Leaf Frank Thomas card. I have no connection to 1990 Leaf and very little interest in Frank Thomas. But I know that Thomas means a lot to many collectors of a certain age.
The number of Gwynn/Maddux/Thomas collectors -- yes, all three -- that I've come across since starting this blog has to be in the double-digits. For me, cards of those guys -- well, except for Maddux Dodgers cards -- are just cards. Nothing special.
So this card was targeted solely for trade.
I didn't expect to give it up so quickly.
I had been dealing with a reader named Dave, who sent me a few 1967 Topps cards a couple of months ago. He was mentioning his card interests in an email and said that he was collecting the 1990 Leaf set and he'd love to get his hands on the Frank Thomas from that set.
I smiled at the email. "I think I can do something about that, Dave."
And I sent it off. With only a vague idea of what I'd receive. Because I was suddenly giddy that I could help someone fulfill their baseball card dream.
Dave sent me four 1967 Topps cards in the exchange. The Bob Bruce I showed at the top is rather special to me -- yes, as special as a 1990 Leaf Frank Thomas -- because it is the first 1967 Topps card I ever saw as a kid and, goodness, was that card as old as dirt! It's nice to have it back in my possession after decades and decades apart. 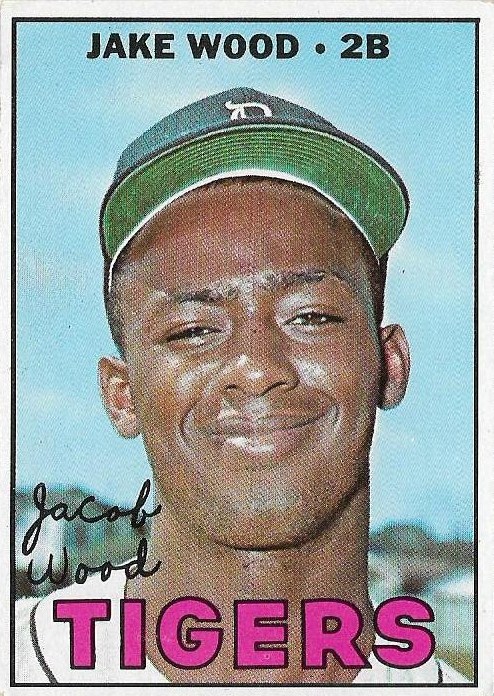 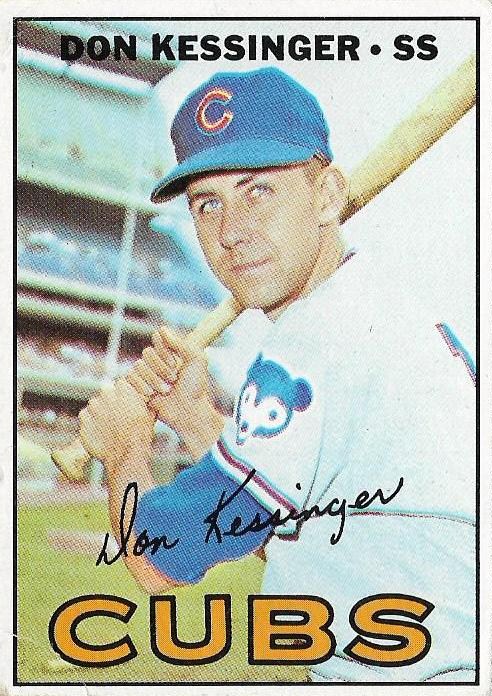 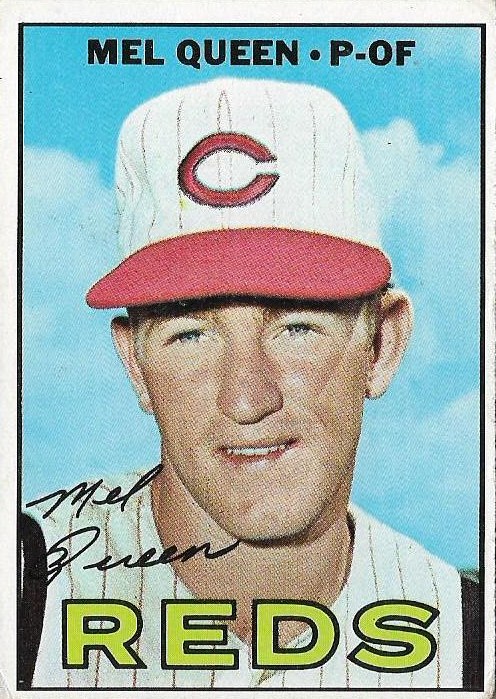 Those are the other '67s that I received. I'm going to carry out on my threat to make Jake Wood a Cardboard Appreciation Hall of Famer, I swear.
The Mel Queen card I owned already, but that's OK. All the flippers are trying to corner the market on Shohei Ohtani cards ... 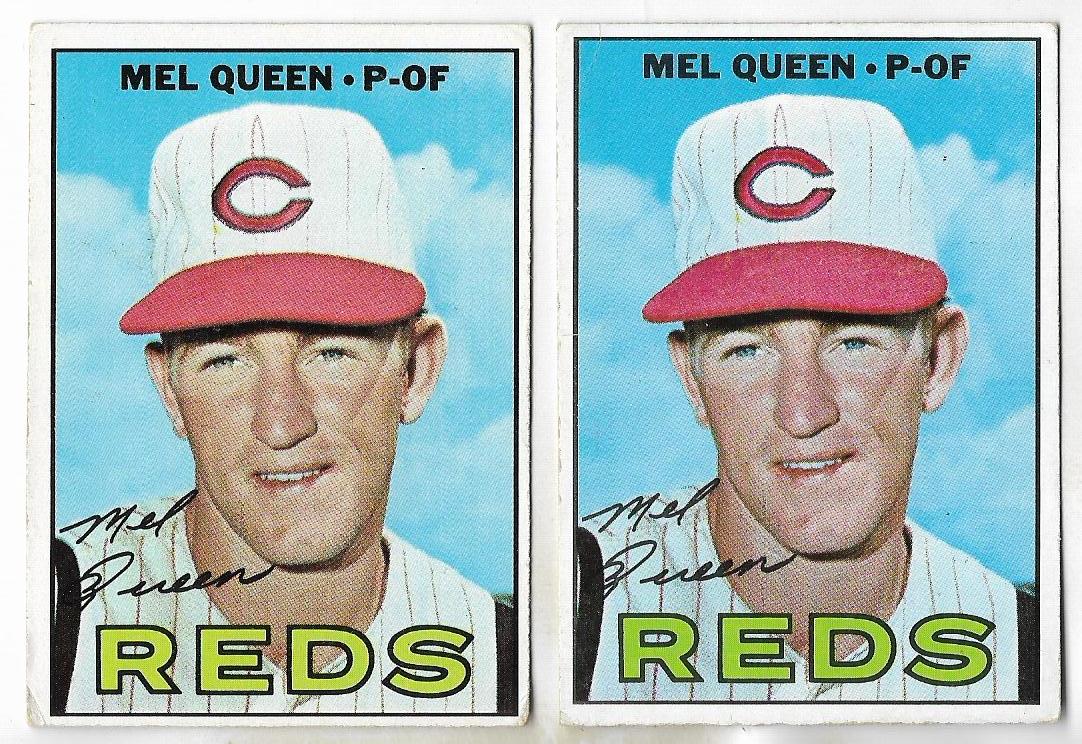 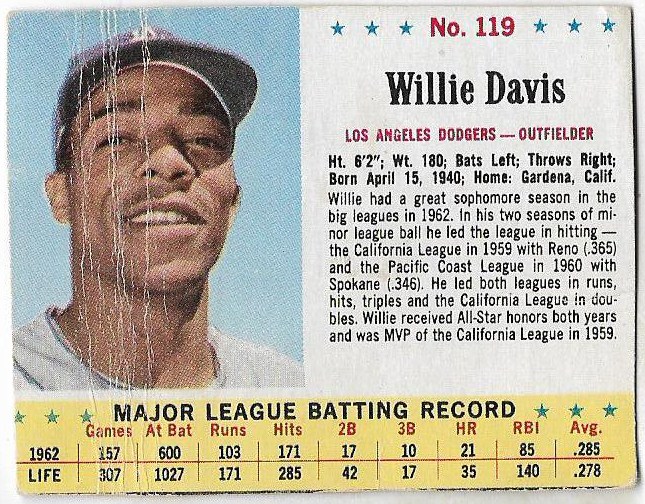 In typical Post fashion, Willie has aged quite a bit, adding some wrinkles and shrunk, as well. 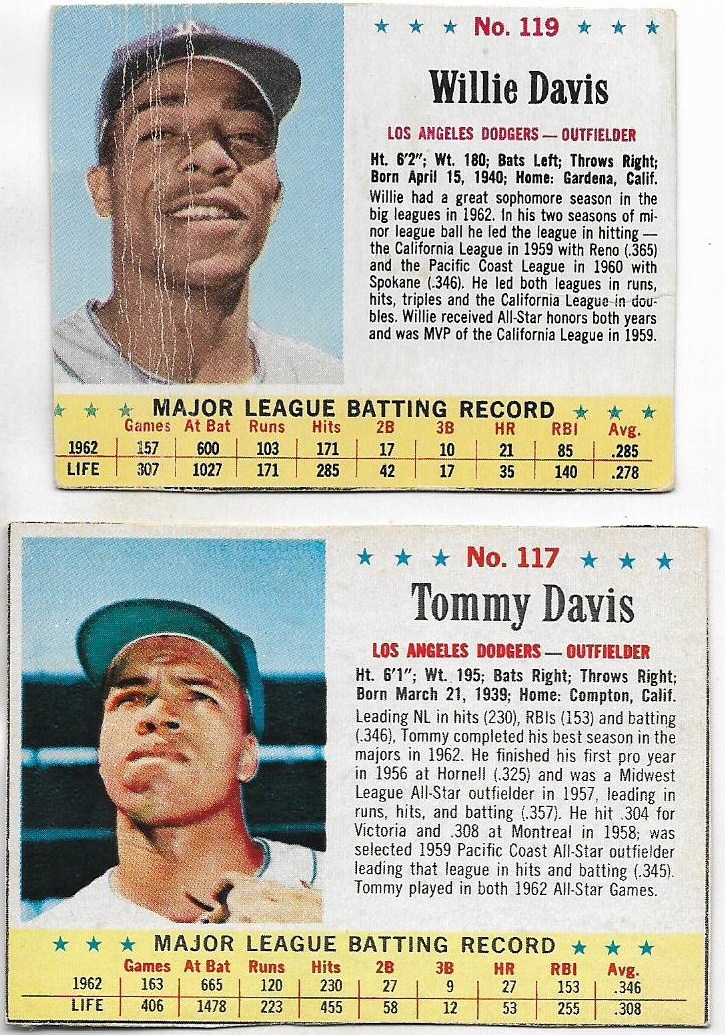 Somebody didn't like the empty space on the sides of Post cards. I admire the collector's quest for tidiness but Tommy is a bit concerned.

Dave also upped my total of Jim Neidlinger autographs from Zero to Three! Now I just need to get the famed Upper Deck card of Neidlinger swinging the bat signed.
That's all a nice bit of variety for one card -- albeit a coveted one -- from the junk wax era.
I think Dave made out pretty well, too. He got that Thomas card that people charge too much for and I threw in a few Dodger oddballs from the '80s.
It's all about where you're coming from. Thank goodness we don't all like the same things or we'd never get any trading done.
Like the sign says:

You never know what I will find valuable.
And what I won't.

Nick said…
I've been swapping cards with Dave here and there recently as well - he's a generous soul! Glad you could find a good home for the Big Hurt rookie, and looks like you got a nice return for it. I always wondered why that one specific year of Post seemed smaller than the others.
April 13, 2021 at 7:32 PM

night owl said…
Wow, Dave said it was Post and I didn't question it, nor did I know that one of the differences between Post and Jello was the smaller size. Thanks!
April 13, 2021 at 8:59 PM

Fuji said…
Maddux/Gwynn/Thomas are all three guys I enjoy collecting. Had you replaced Thomas with Ricky... it would have been my personal collection trifecta.
April 13, 2021 at 11:47 PM

Dave said…
I did indeed make out well and covet the Big Hurt. I had no idea about the Three Dog being
Jello...coulda sworn BeckettIDd it it as Post. I have not checked, but are the card numbers the same ?
April 15, 2021 at 5:38 PM