Here we are in 2021, still collecting Panini Donruss 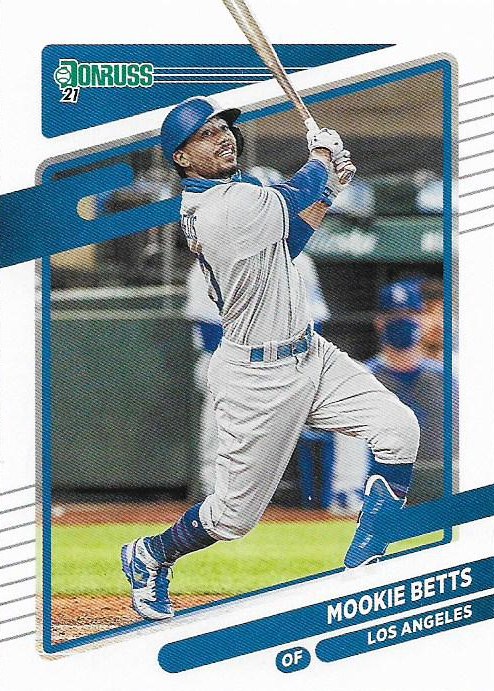 Don't you hate it when someone asks you a question in the comments of your post and you can't answer it? By the time you're able to find the answer, it's the next day or whatever and it seems pointless to answer in the comments, unless that person has that notifications thing going (I don't).
John asked me a question about the Bob Bruce '67 Topps card I put at the top of last night's post, was it the error version or correct version? I was at work when I saw the comment and the card was at home.
So I'll just post it here: It's the regular version, John, not the "RBAVES" error. Now that's service for you!
I'm also going to show off the cards that he sent me just the other day. It was mostly a bunch of newly released Dodgers, particularly stuff from this year's Panini Donruss offering. 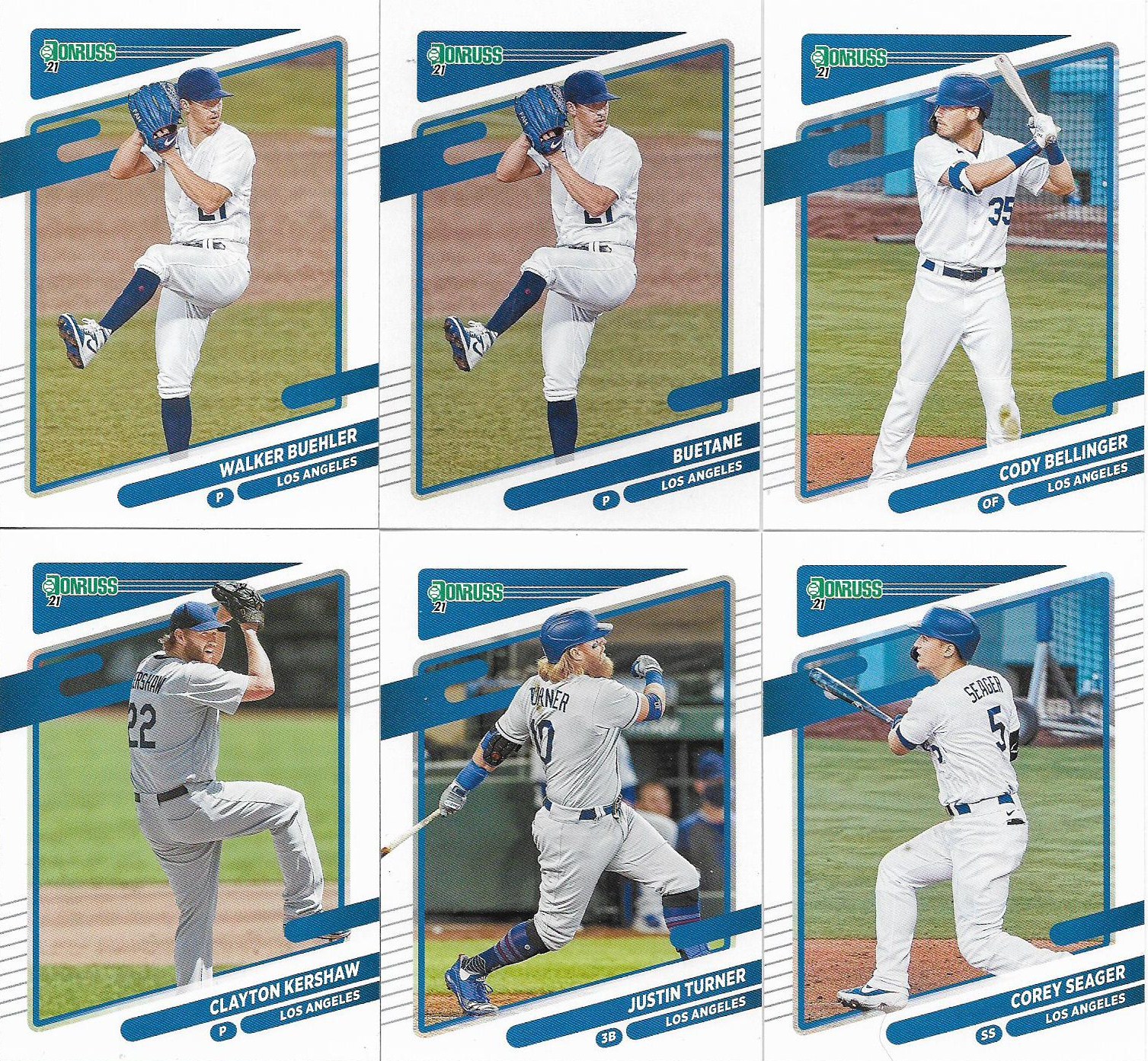 These were all also pulled for me in a Nachos Grande group break, which is the perils of being a popular blogger who enters a group break.
But there were a couple of the Donruss cards that didn't show up in the break. The Mookie Betts up top is one. 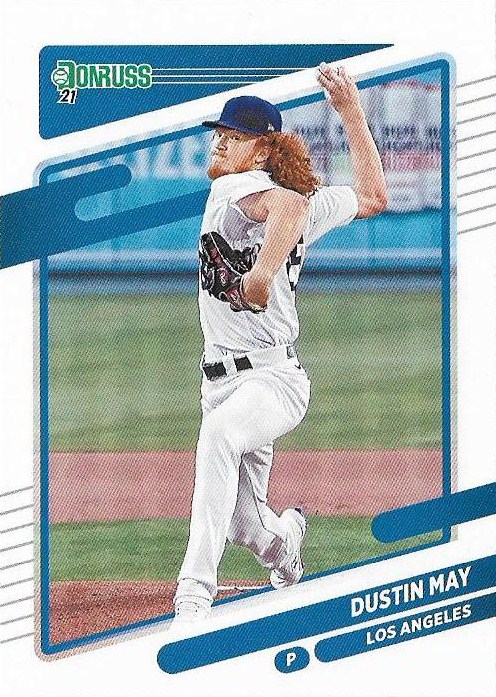 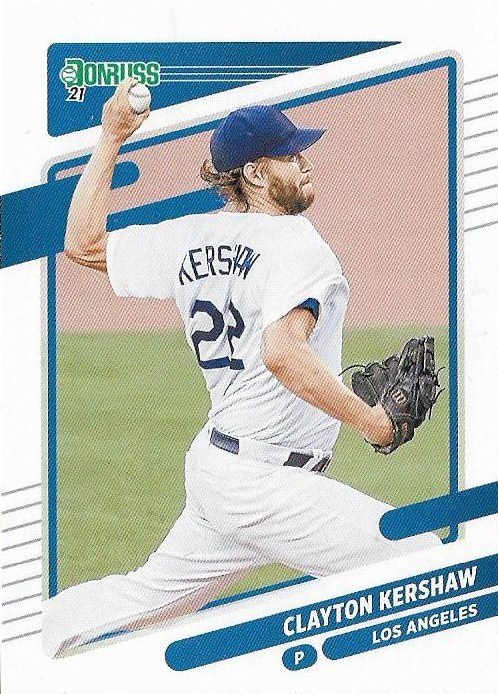 These are the other two. I believe the Kershaw is a variation from the earlier one I showed, or maybe vice versa, who knows, who cares, it's Donruss.
There have been many, many mentions of the similarity between the 2021 Donruss design and the 2021 Topps flagship design and, yup, they are definitely similar.
While, naturally, I prefer cards with logos, I think I like the Donruss design better. I prefer the smooth slashies over the angular slashies. Also the design elements that move into the picture, which both card sets have, aren't interfering with the image as much as the Topps slashes do.
And you can read the damn names in the Donruss set.
OK, that's all being very cordial about Panini Donruss -- have I mentioned that I really like the green Donruss logo on the blue backdrop, too? -- but I haven't changed my stance on this set. I still think there's no need for anyone to buy it and that it probably shouldn't exist.
I'm definitely on the record on this, going back to when Panini resurrected the brand in 2014 with this atrocity: 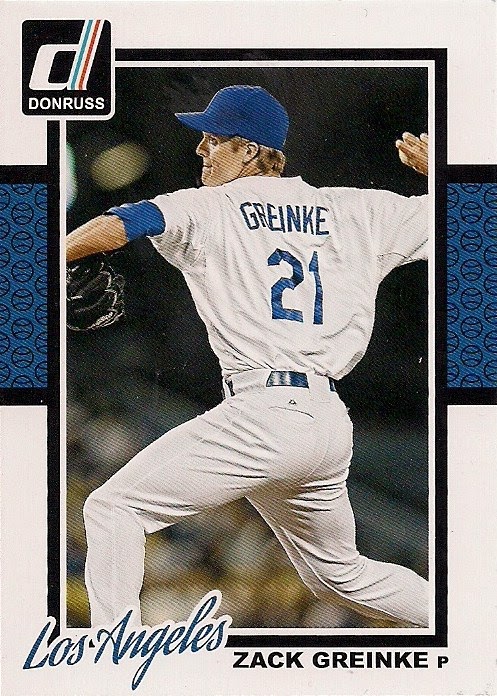 That's just gross. I actually bought a pack of this. And featured it on the blog.
Never would I have imagined then that people would still be collecting this brand seven years later. I figured Donruss would fizzle out in a couple of years. I was so wrong.
Admittedly, Donruss has mixed up the photos a little better since 2014 and the designs have improved over the last few years. But they're still not great. There are still no logos. The backs are still unreadable and puzzling -- Justin Turner's card back says that he "dents the orb," what the hell? 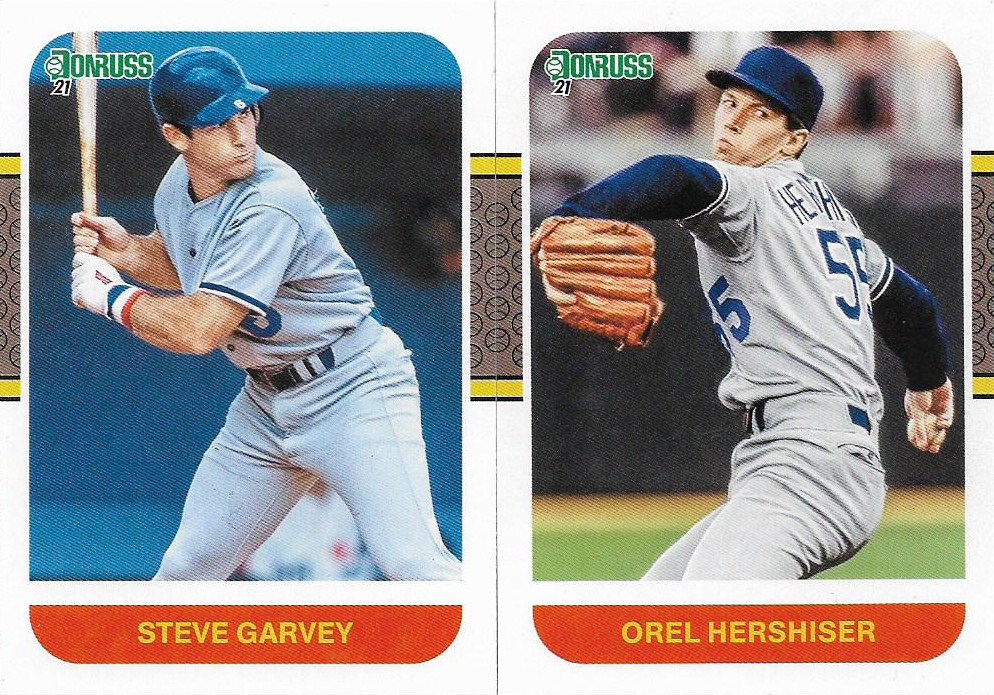 Then there is this that makes me want to rip up all my Panini cards and scatter them outside so birds can build nests with the bits.
No, I am not upset about new cards of Garvey and Hershiser to collect, in fact, I'm thrilled. However, I am almost certain that there is some sort of weird copyright rule that forced Panini to transform its tribute to the 1987 Donruss set from the only redeeming aspect of that original set -- the black borders -- into boring ol' white borders. Otherwise, why would you do this? At least make them that maroon Opening Day color from that year.
Here is another thing that baffles me with Panini's '80s Donruss tributes. I have mentioned this before. I am the only one who I am aware of who has ever mentioned it. I don't understand why nobody else cares or doesn't see it or -- HOW CAN YOU NOT SEE IT, IT'S SLAPPING ME IN THE FACE! 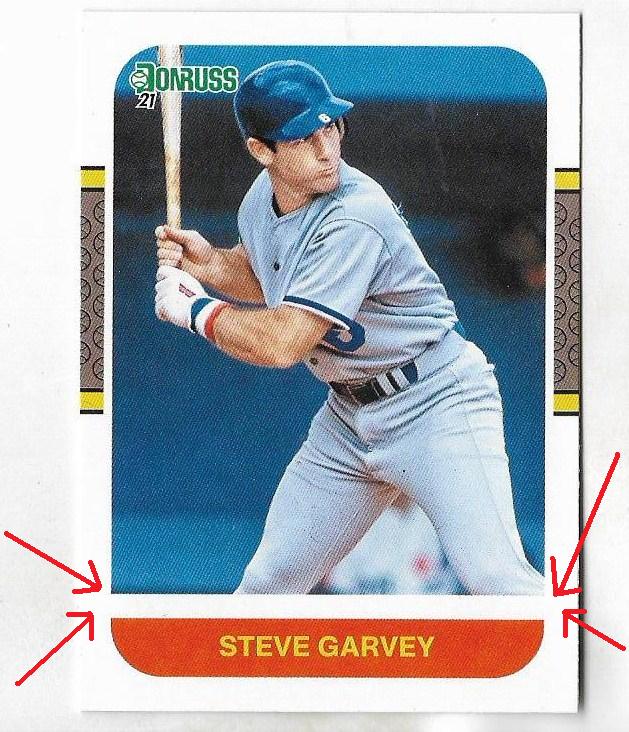 It's the white bar that Panini places at the bottom of the photo for all of its retro cards in the Donruss set. It's been there the last three years even though it's never been there in any of those original sets.
Let's review: 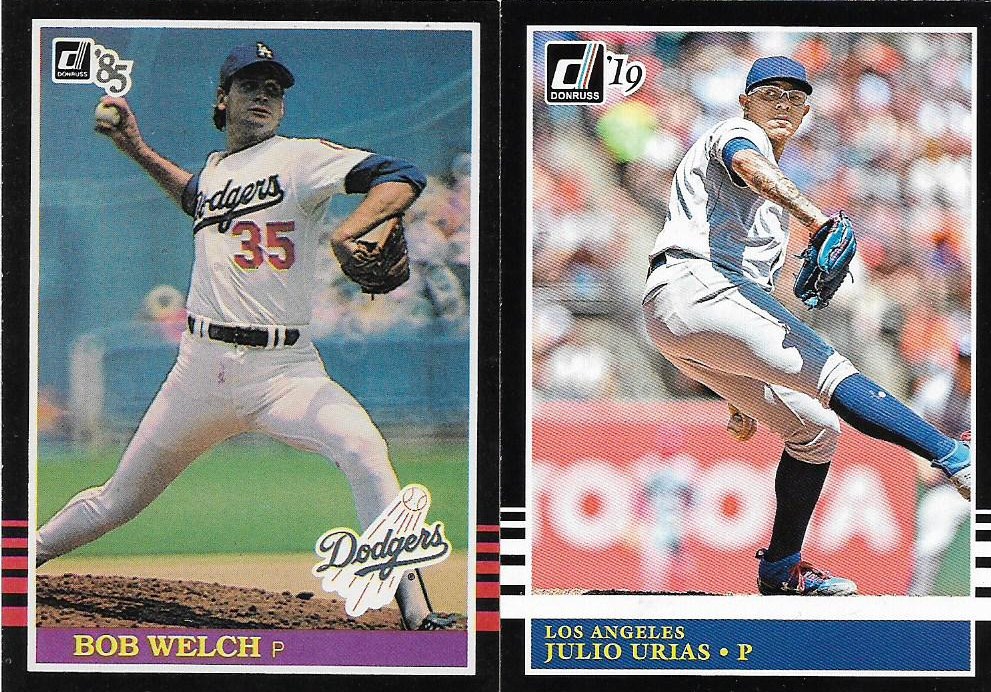 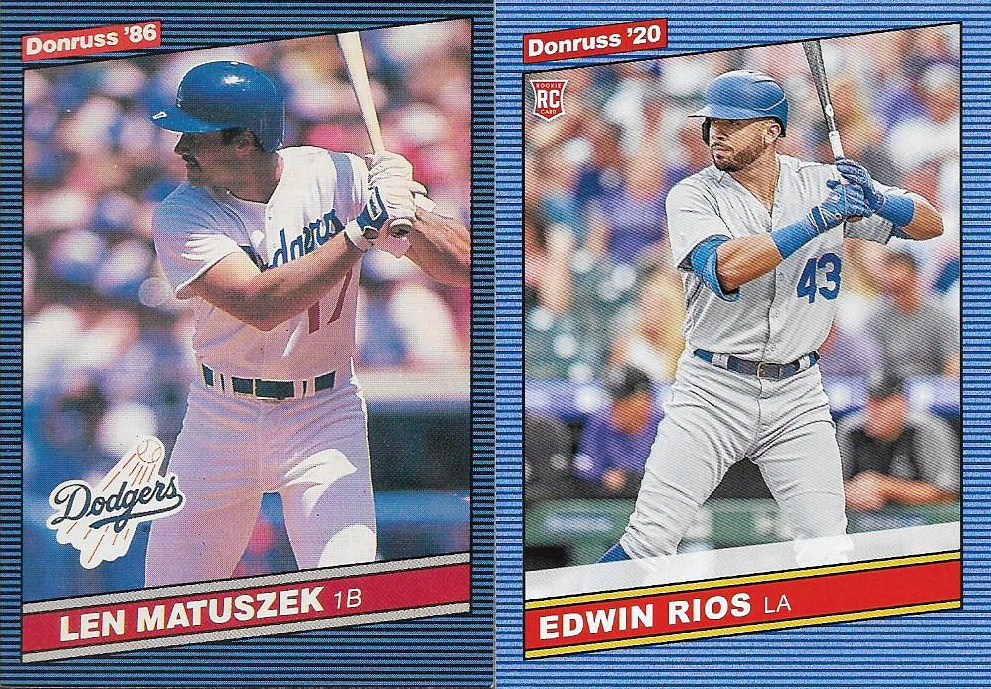 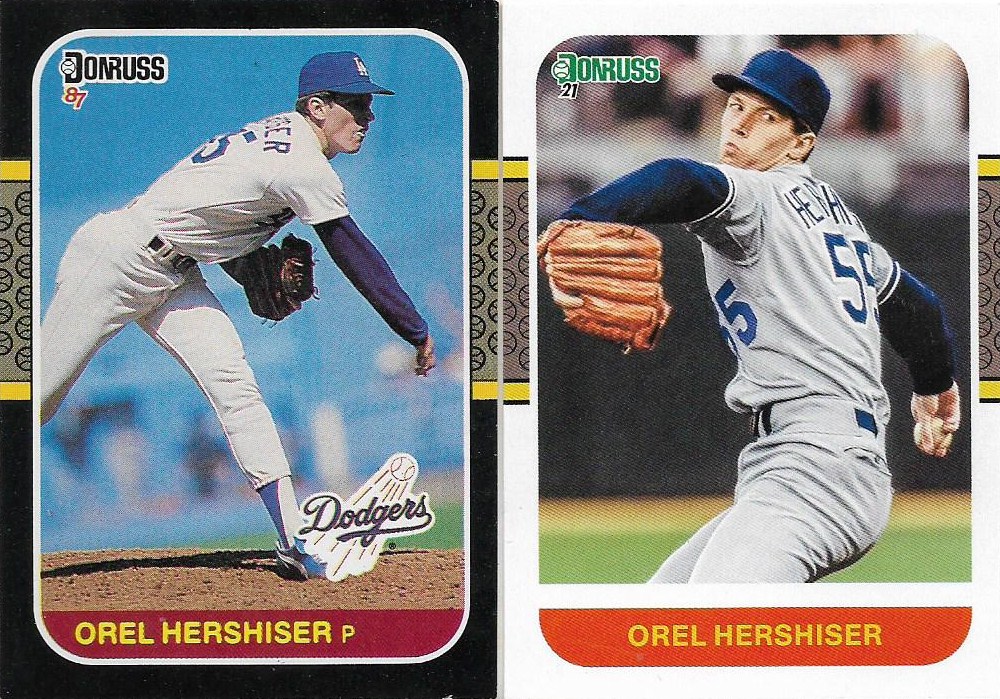 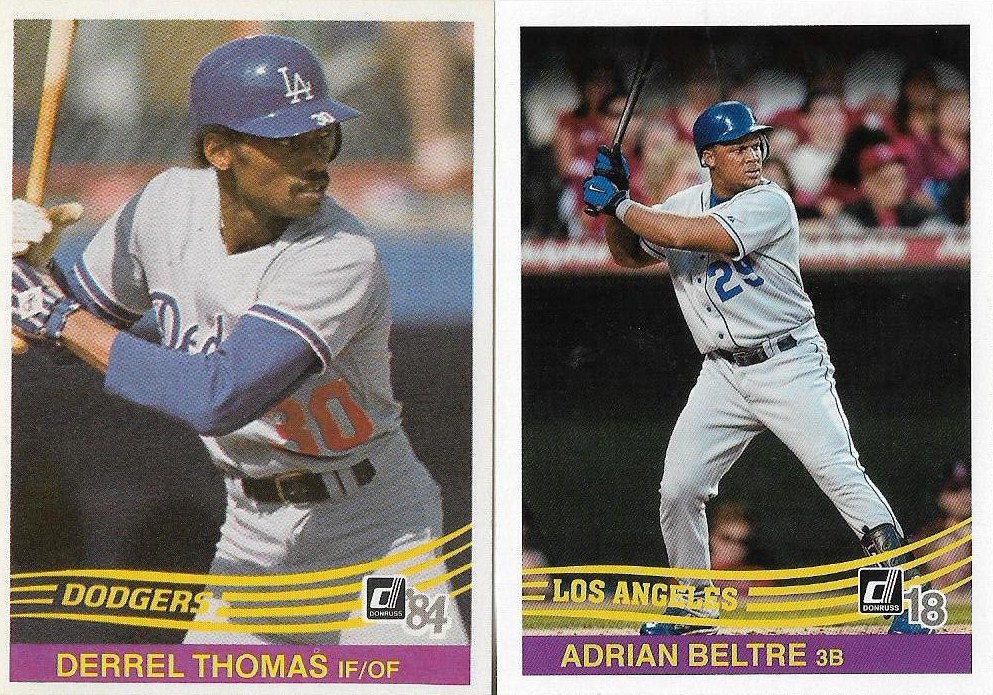 I just stare at these cards and my brain goes, "why, why, why?" I know the answer is "U.S. copyright law is completely out of control," but maybe it's just inexplicable Panini weirdness.
Anyway, I'll get off Donruss now and show a few other current Dodgers that John sent: 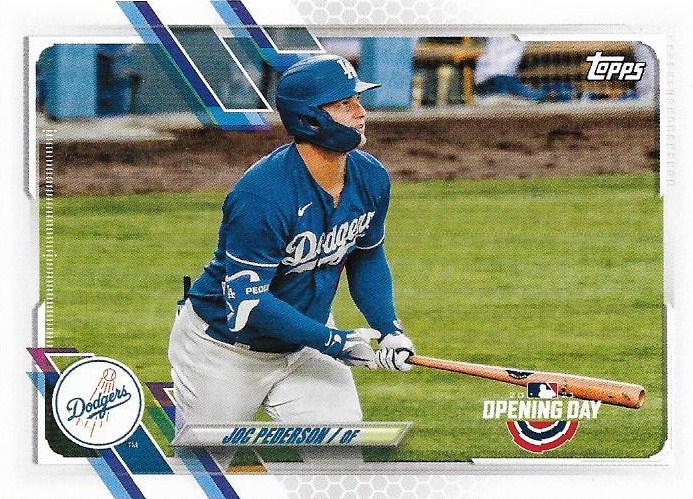 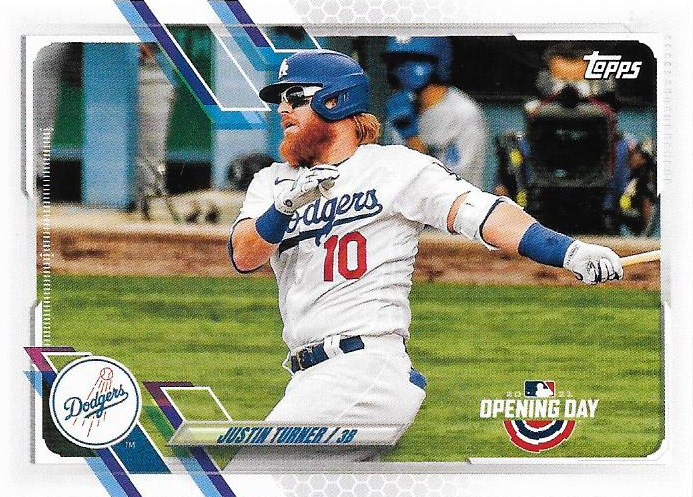 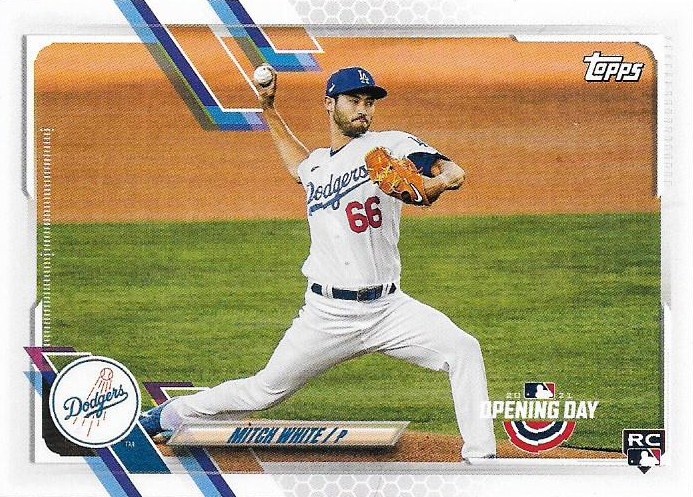 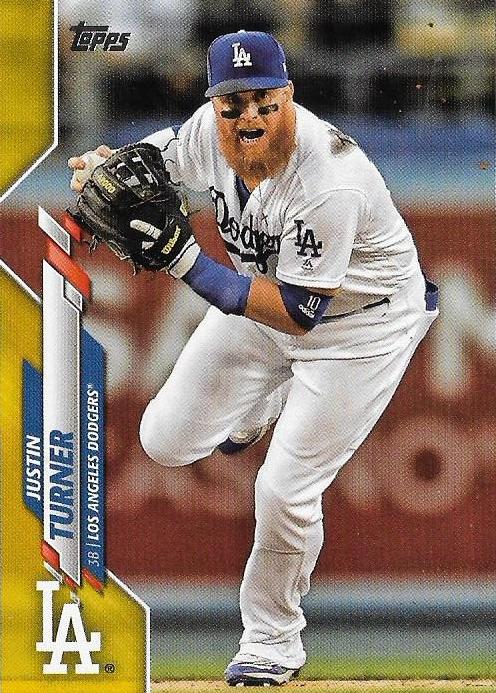 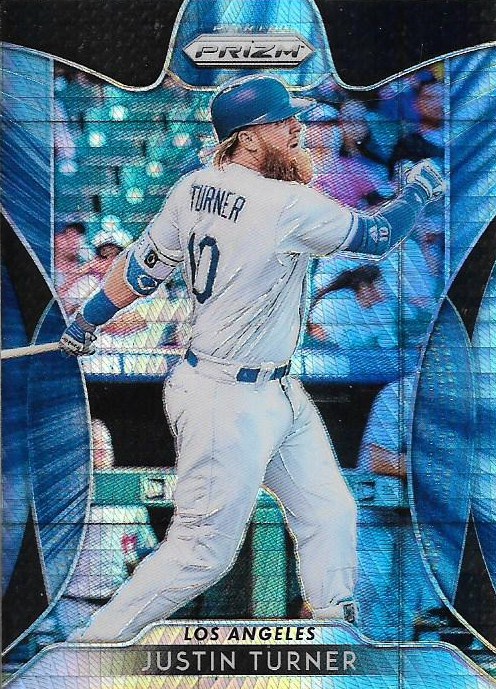 Those are the first 2021 Opening Day Dodgers in my collection. Guess it's time to add another want list to the blog!
The yellow Turner is the Walgreen's version.
It's always nice to get some 2020 and 2021 cards that were never available on the store shelves around me. Even if it's Panini.
Panini's Donruss set is still around for a few reasons:
1. It's the only alternative to Topps
2. Some people don't care about the logos, I guess
3. Donruss has added a lot of bells-and-whistles to the set, lots of inserts, a bazillion variations, many of which are ridiculous but that liven up a box break and distract you from the plainness of the pictures.
But I still haven't purchased a pack since 2015.

Nachos Grande said…
I think the white bar might be there so as to make more parallels (Panini loves parallels)
April 14, 2021 at 8:32 PM

Nachos Grande said…
Actually, I take back my last comment. I went back and looked at this year's Panini parallels and those white bars are still fully white bars even for various parallels.

Johnnys Trading Spot said…
I'd prefer logos, but I'm good with Panini. I wish that hadn't got all stupid with the variations. The nicknames (if they were real and cool) would be okay, but larger images, and text spacing on the backs not good. The Retro stat variations are okay too, but not the "reverse" backs.
April 14, 2021 at 9:11 PM

John Bateman said…
Donruss is boring but reliable. It is also usually the first set where you can get all the stars, as Topps leaves some for the second series.
April 14, 2021 at 9:35 PM

Jeremya1um said…
I would’ve never noticed the white bar had you not pointed it out. The old school versions definitely look better.
April 14, 2021 at 10:12 PM

gcrl said…
The white bar is there for the stat line (season and career) parallels as far as I can tell. They are the only parallels that make use of it, anyway. And believe me, I've seen most of the parallels.
April 15, 2021 at 12:51 AM

I've said it before, Panini/Donruss is just overpriced MSA sets from the '80s. You know the ones, the King B Jerky, Kraft Macaroni and Cheese, Chef Boyardee and many many others. Imagine pulling an Alan Trammel auto out of your box of Cap'n Crunch. As far as I'm concerned, the Panini disgracing of the Donruss brand is way worse than Upper Deck propping up Fleer "Weekend At Bernie's" style for a few years in the late aughts.

John Collins said…
I draw the line at obviously removed / airbrushed logos. To me those cards look horrible and always have. Yes, real Donruss cards in the 80's and the 90's could be boring as well, but at least they had the logos.
April 15, 2021 at 5:05 PM

GTT said…
I actually kind of like the white bar for the 1987 Donruss cards. In my opinion, the player name box looks kind of nice floating around, kind of '70s.

Jeremy said…
I don't collect Panini baseball cards, but they have sometimes have nice designs (Diamonds Kings, for instance, is gorgeous).

My guess is that the card companies might argue that it is hard to remain profitable if they have to share the license with another company. Considering the massive shortages of new product these days, that's probably not true, if it ever was.

I'm all for Panini getting an MLB license, but it seems it will take a major paradigm shift among major sports leagues for that to happen.
April 16, 2021 at 1:46 AM

GCA said…
"Here we are in 2021 still collecting Donruss".

For all the reasons you said.

And not Topps either. For the same reasons too.

Peter K Steinberg said…
The cards are nauseating, and not just because they are Dodgers! The white bar is terrible. The lack of logos is heinous. And I'm relatively sick now of these retro sets harking back and paying homage to themselves & how wonderful they were.
April 16, 2021 at 5:18 PM