More of those stupid buybacks and answering your most-asked questions 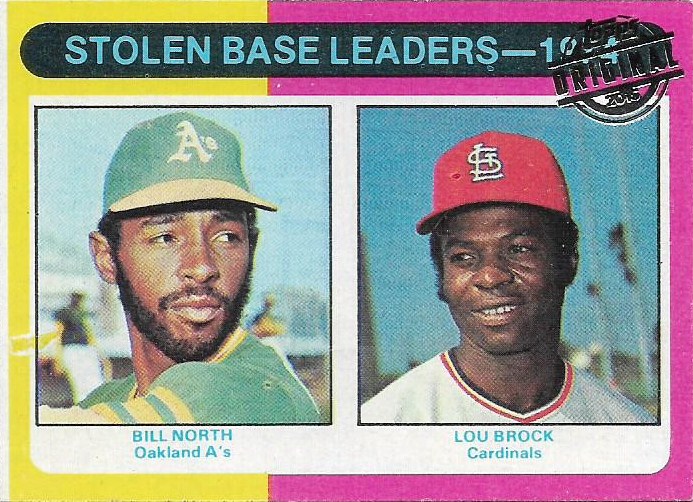 I started scanning my latest arrival of 1975 Topps buybacks the other day to plan for a future post. I hadn't intended to publish it today -- I tend to write about these a lot and I like to rotate topics a little more frequently.
But then someone mentioned in the comments yesterday that they were wondering about my progress and, heck, that's a sign if I ever saw one. A question about buybacks as I'm scanning the buybacks? You're getting a buybacks post!
What's more, I'm also going to answer some of the questions I get about this collection all the time. It produces more questions than any other thing I collect so I'm not going to worry whether I'm boring someone right now. Obviously not everyone is bored.
Most of the latest group of buybacks came from COMC, because it's easily been the most productive outlet for a crazy pursuit like this. But these two arrived from other places: 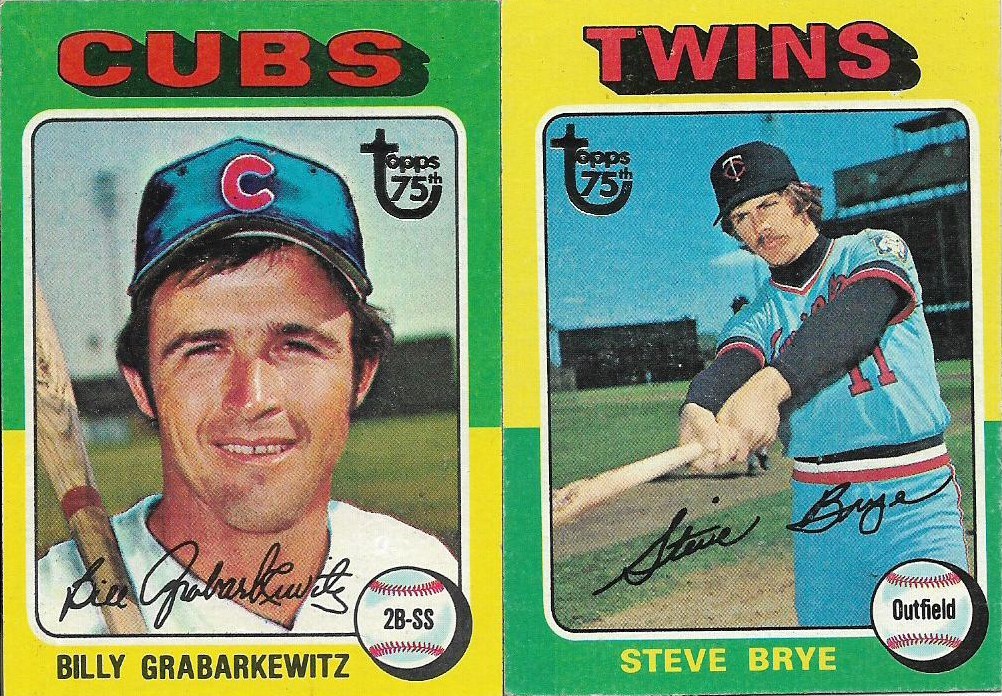 The Grabarketwitz arrived from Sportlots, which hasn't offered up many '75 buybacks that I've needed. I think I was too far into my pursuit by the time I started searching Sportlots. But Billy Eyechart gets my hopes up that I'll find others in the future.
The Steve Brye is from ebay, again not a place where I've found many '75 buybacks that I need. But you never know with ebay's massive "inventory," so I'll keep on checking.
Now let's get to the COMC cards: 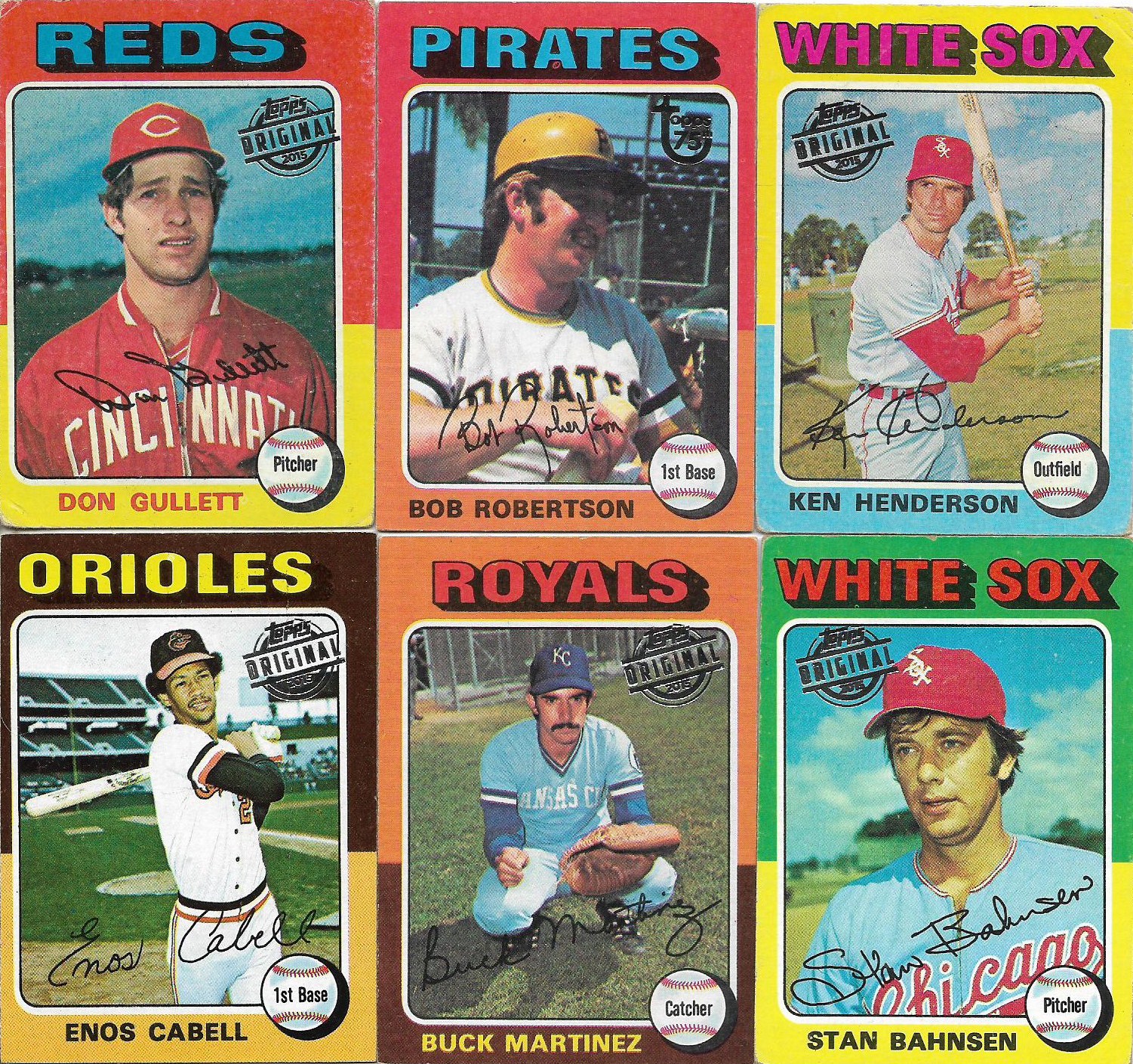 There are 32 buybacks from COMC this time around. And although people are always asking me what superstars I have in '75 buybacks, I think nabbing cards of players like Don Gullett and Enos Cabell is a pretty decent find. These guys were a big deal back in my day and even if they've faded as time has gone on, I still respect their cards. 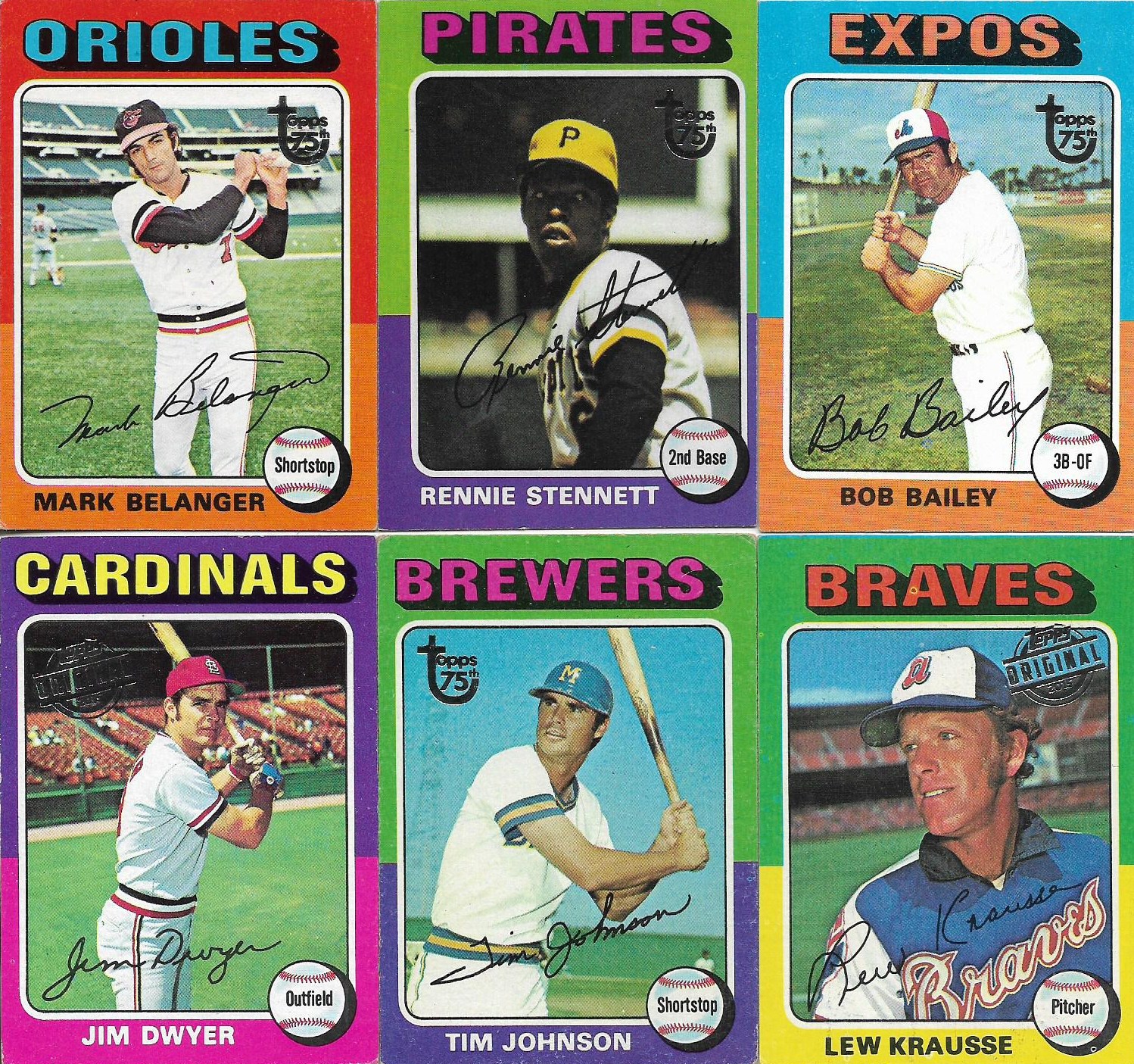 More key ones in Mark Belanger and Rennie Stennett. Back when I was first starting this quest, I said I wouldn't go above paying $2 per buyback. That threshold has changed as I've gotten deeper into the quest and the hobby has become more expensive. I've moved on to being OK with paying between 3-4 dollars if I have to. I still ignore anything $5 and above unless it's someone very notable. 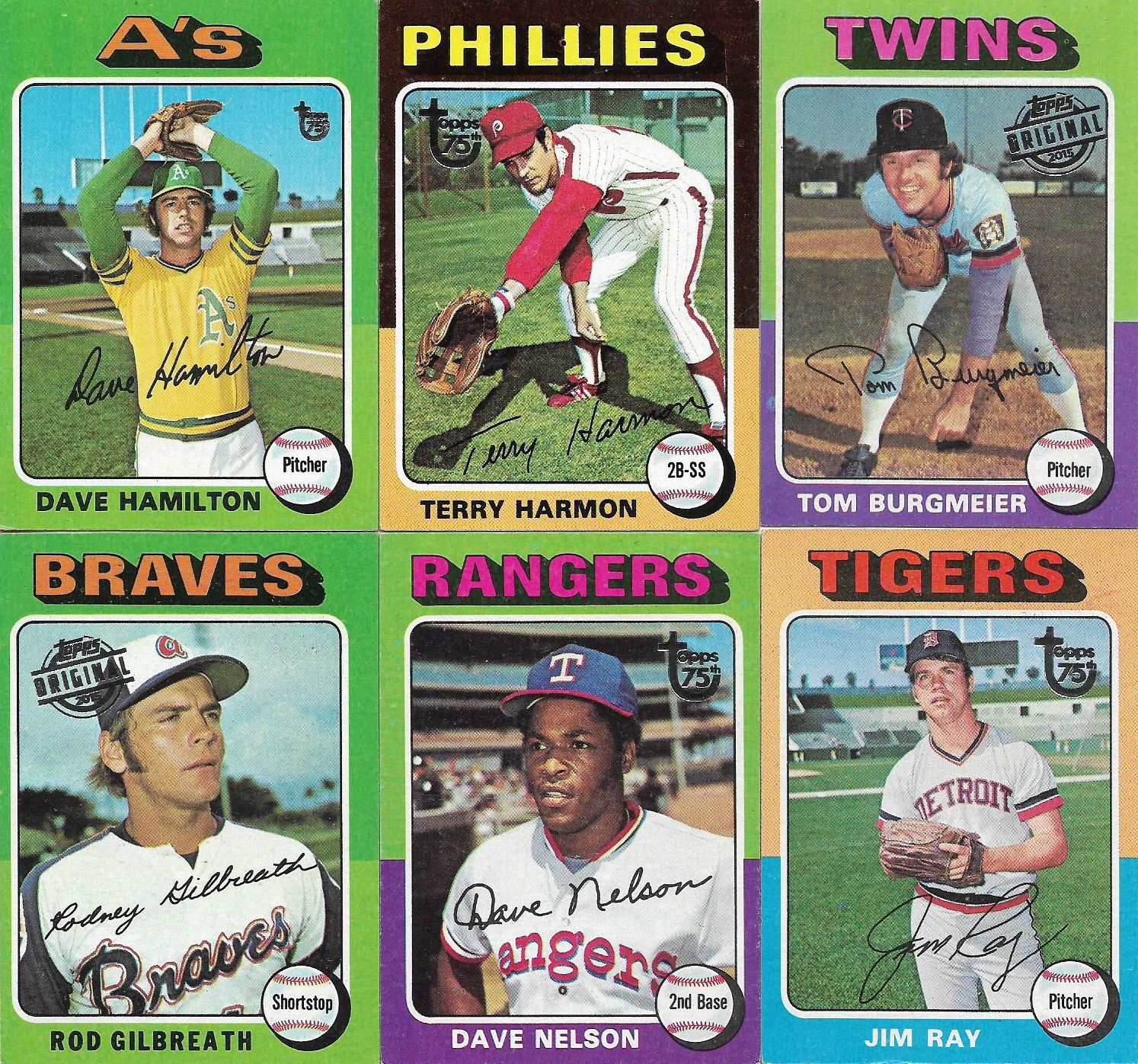 More and more! This includes cards that I owned as a kid in '75, like Gilbreath and Nelson. 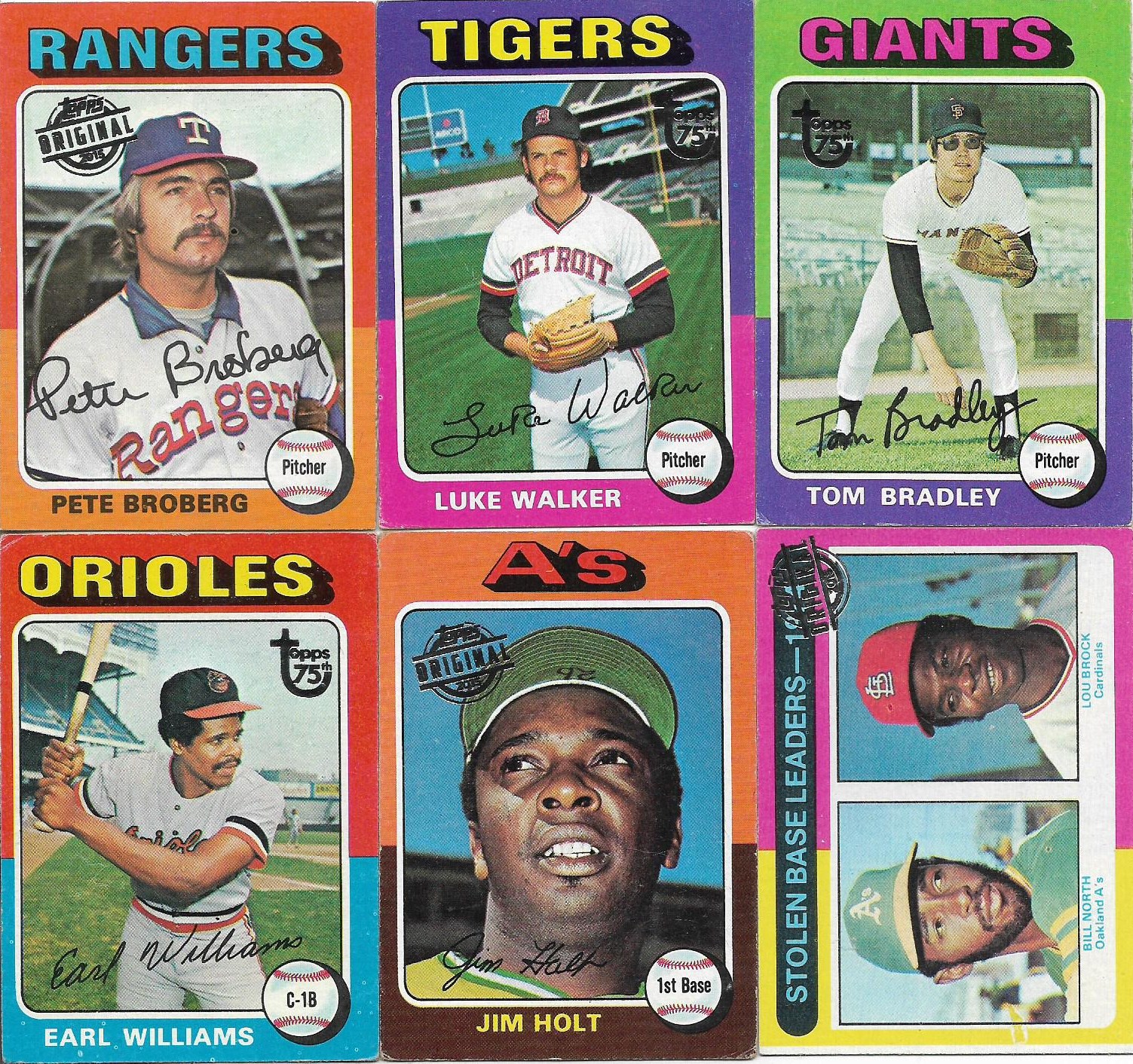 That is the rest of them. The stolen base leaders card I appreciate the most as it seems like a feat to land a buyback of one of the subsets. They don't come around that much. I also like how the leaders card shows a white edge on the left, like it was on the bottom row of a sheet and was miscut.
Once I showed these cards on Twitter I immediately landed a trade for more buybacks from @KCRissler. And I'm always surprised by how excited I get when I land that kind of a trade. 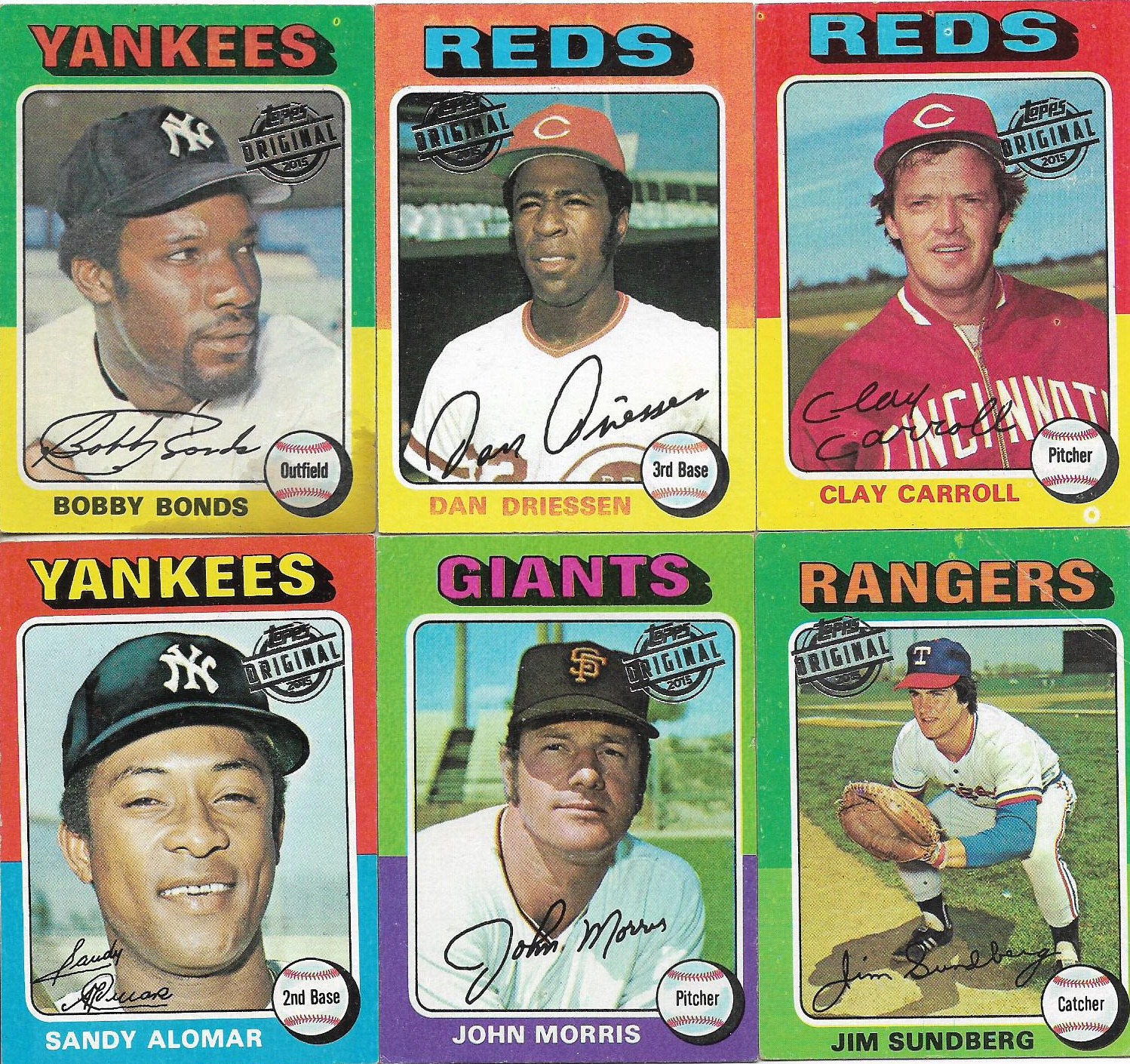 Reds and Yankees dominate here, which is also key as both were prominent teams at the time, the Reds the pending World Champs and the Yankees on the way there.
Someone's pointed out the stain on the Bobby Bonds card already and as I've mentioned before, I don't care about the condition of these cards. They've already been damaged by a foil stamp, you can't hurt it anymore. 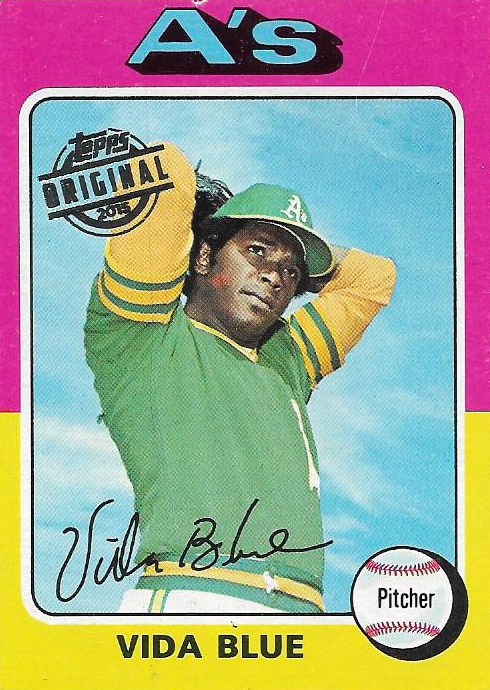 David said…
Great writeup, makes me want to take on this challenge as well. 1976?

gregory said…
It's pretty cool to see the progress you've made on this project. No doubt this post will get more folks to help you out on your search. I'll be one of them!
May 1, 2021 at 6:52 AM

Fuji said…
A. Congratulations on reaching the 66% mark. That's an awesome achievement.

B. Love the Vida! It's a great looking card.

C. Sucks to hear COMC is still behind. I'm debating on spending the last $10 or so I have in my account just so I can receive my shipment before the start of the new school year.
May 1, 2021 at 8:59 AM

Brett Alan said…
I think I've said this before, but some new 1975 buybacks (if that isn't a contradiction in terms) should be coming in 2024 Heritage.

BaseSetCalling said…
Have a brand new question that hopefully you can answer next time: have you filled up a binder page yet?

But the needs list basically answers that in that I can’t see many sequences of 9 card #s not needed.

So here’s hoping that when we see these again, 9 page-mates have been acquired - that will look cool.

I enjoyed these cards but don’t buy very many hobby boxes so never pulled many of them - just 4 of them I think. But I enjoyed finding a card that had been in a pack twice. I met my first goal of pulling a ‘75. Then I met my 2nd goal of pulling a card I remembered well from childhood, which was a ‘76 Lopes Highlight. I was in awe of most Highlights cards then. Hopefully all of the ‘75s are out there.

night owl said…
I can answer both of those questions now:

I had one page where all 9 pockets were filled until this latest group and now three pages are filled. Every page has at least two cards, except the last one, in which there are only 3 cards on that page anyway (658-660).

Four of the '75 All-Stars are in my buyback set: Cey, Messersmith, Burroughs and Wynn. I also know that the Garvey and Carew AS cards exist as buybacks. I haven't seen any of the others I don't think.
May 1, 2021 at 4:22 PM

Jon said…
I'm not sure if you've looked or not, but checking the sold out option on COMC yields some interesting names; Aaron, Killebrew, Santo, Torre, and the Ryan that you mentioned. So it looks like at least a few of the bigger names have gotten the stamp treatment.
May 1, 2021 at 9:42 PM

Anonymous said…
This is a great project IMO. I am collecting 2012 Topps flagship buybacks myself. Why, because I decided to build the 2012 Topps golden relics set, and then decided to go for the 2012 Topps World Series Rings, and then the World series pins, and then to get one card from every subset, and then one thing led to another, and said what the heck, I'll go for the master set. Slowly, very slowly, on a budget, and through trading, and no more than $20 a week of ebay purchase. And then added 2012 Topps On line exclusive mini, then 2012 Topps Chrome, and then 2012 Topps Opening Day, in pursuit of some rainbows across all 4 sets. And so, when I first saw a buyback, of course I had to have them too. And also throwback style sets, so when Transcendant puts out the Derek Jeter career cards SN/87, or imagines the Kris Bryant cards going back 20 years before his career began and SN/65, I need those too.
May 1, 2021 at 9:51 PM

Jeremy said…
I haven't bought anything on COMC since last June, I think. I still have about $30 in credit or so sitting in my account there. Besides them being unable to handle their customer volume, I'm also finding that because they are so slow to list cards that the amount of cards they have for sale is not as good as it used to be, and that prices are becoming higher because of it.
May 3, 2021 at 12:40 AM

AdamE said…
What other cards haven't you seen?

I haven't seen the yankees team card featuring Virdon and I have looked for it every single day since 75 buybacks became a thing.
May 6, 2021 at 5:05 PM