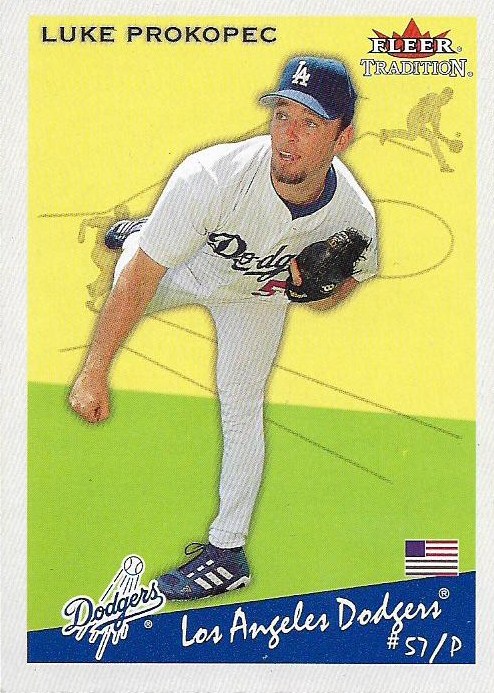 My good card buddy Angus sent me an email this morning letting me know that a card show is taking place this weekend an hour from me.
This is a place where Angus and I have traveled for a show before. But as we're still in the middle of a pandemic, he can't cross the border to get to the show and I'm not comfortable yet going to one.
It's encouraging to see New York State opening up enough to hold events like this. The state where I live has been much stricter about this than other states, and while it's made a lot of people furious, I've been OK with it. I've never been a crowd person anyway.
The thought of being in a crowd -- even a masked-up, socially distanced one -- of collectors in the relatively confined space of a hotel convention room puts me a bit on edge. It's probably safe enough, but I think I'll wait for the summer or fall. I'll be fully vaccinated by then and much more comfortable. Also, the reports I've heard from other shows -- of inflated card product, so much newness outweighing the vintage and newbies parading around with their weird new card ideas -- doesn't make me any more willing.
There have been lots of other bloggers and folks I know on Twitter who have been to shows in the last few months, and that's fine. Do what you do. But I also know there are others more tentative. Nick from Dime Boxes -- who thrives on card shows -- is still waiting to go. He sent me an envelope recently with just a few items, as he hasn't had shows to replenish his trade material.
Let's take a look: 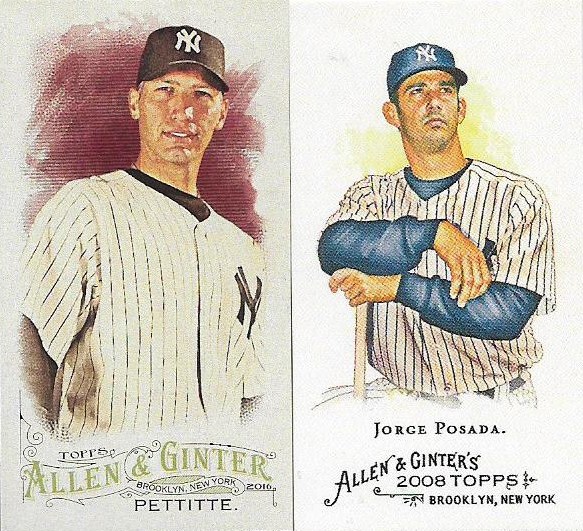 A couple of Yankees try to break into my A&G frankenset binder. Nope, that's not happening. Somebody take these off my hands! 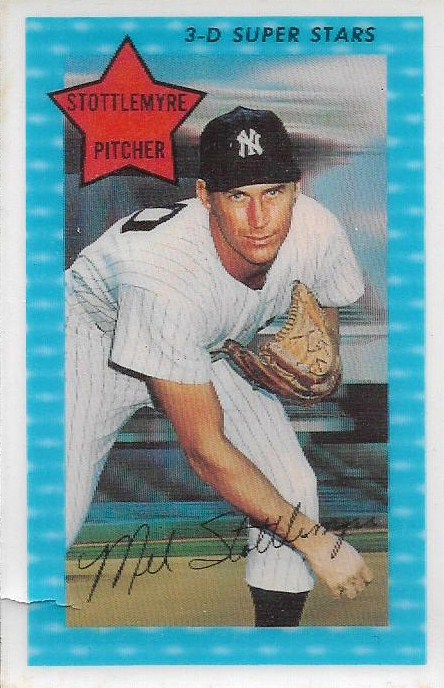 Here's another Yankee that I should welcome with open arms but surprisingly it's one of the few 1971 Kellogg's cards that I have already! 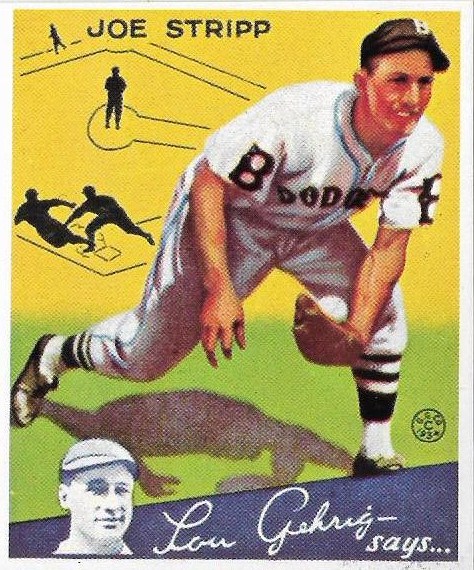 This is a reprint of the 1934 Goudey Jersey Joe Stripp card. In my usual clueless fashion, I never realized that 2002 Fleer Tradition (see card at the top of the post) was a take-off on that design.
Reprints are great if you don't have the moldy original already. But I do: 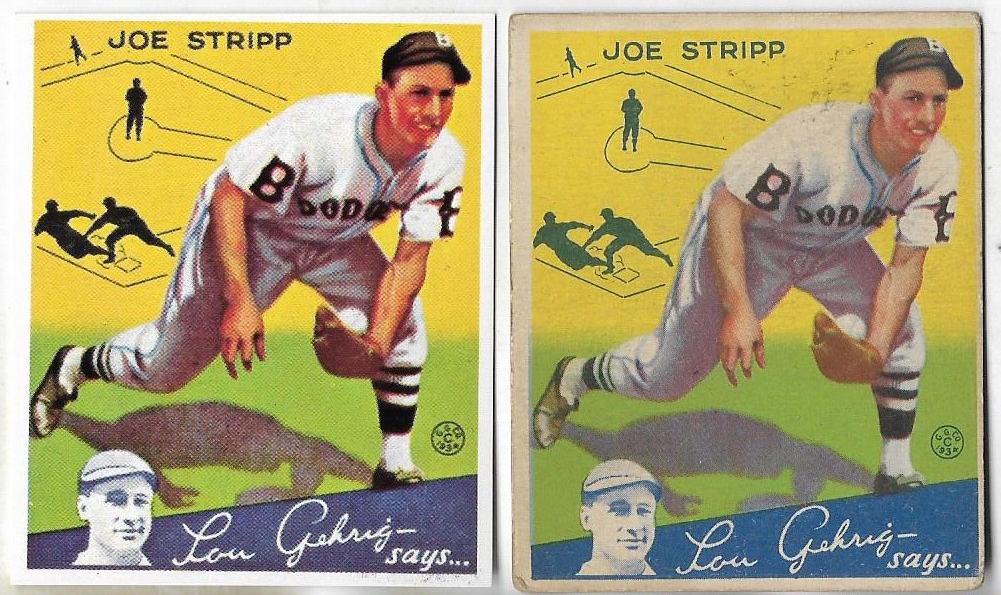 OK, so this envelope isn't going so well right now.
Let's pick it up with some Dodger needs: 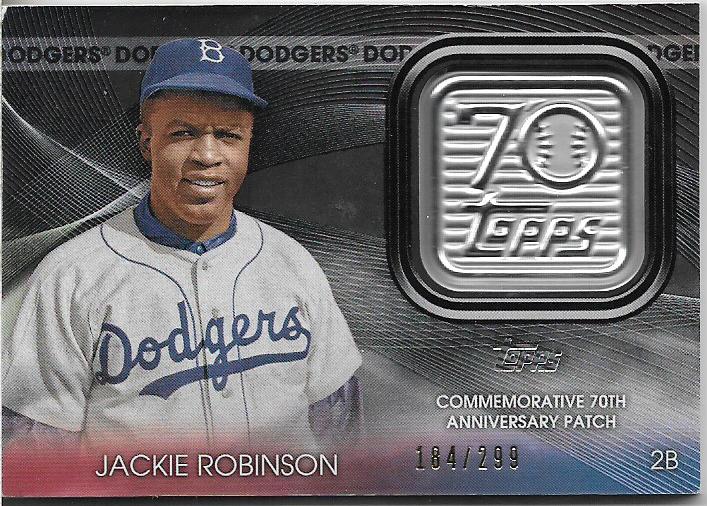 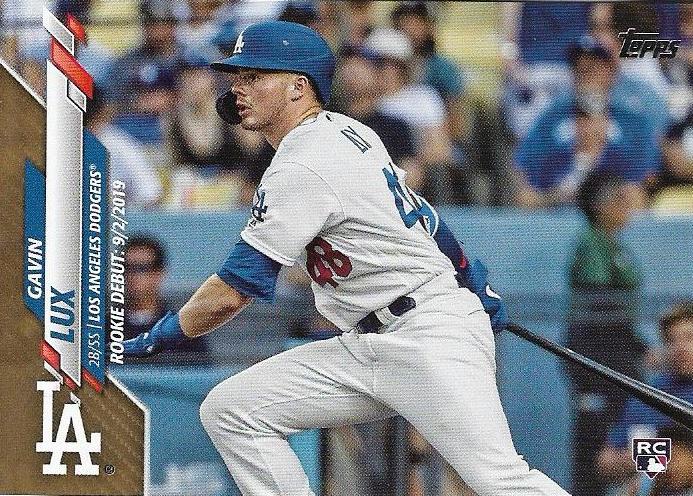 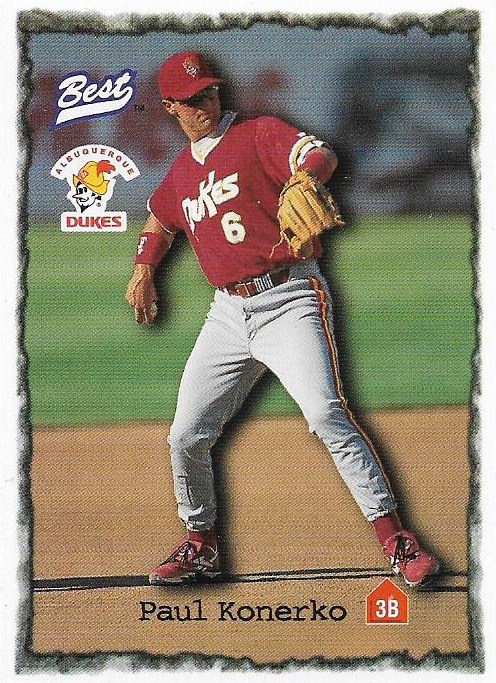 All key stuff there. I threatened recently to show off my top 10 favorite manupatch thingies in my collection. Then I looked through the box where I throw such stuff and I couldn't even come up with five. So, never mind. Maybe stop making these, Topps?
The Gavin Lux card is the 43rd one in my collection, which is just obnoxious compared with how many major league games he's played. He's in Darrell Evans and Vida Blue territory in terms of total cards I own (and he'll be surpassing many other players who should have had more cards very soon). 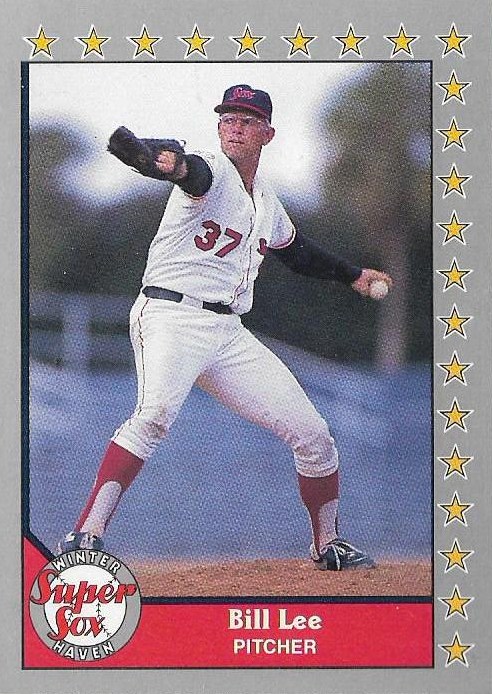 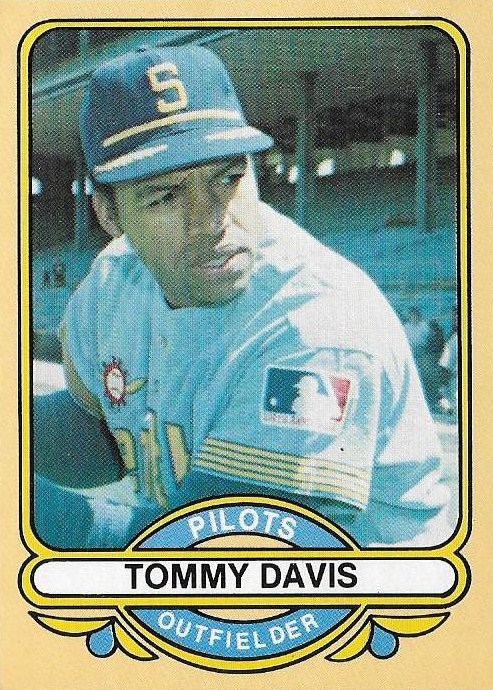 Speaking of those great old guys, Nick and I share an appreciation for tribute sets of old-school players and both of these fill that list.
So, not too bad there. But obviously, Nick and I both need to get to a show.
In time.
I'm not locked up in my house or anything. I'm back to working regularly in the office. I've been to restaurants. I've been in book stores. Four days ago, the wife and I traveled to Syracuse (also where the card show is) to do some shopping and eating. It felt good. And comfortable. 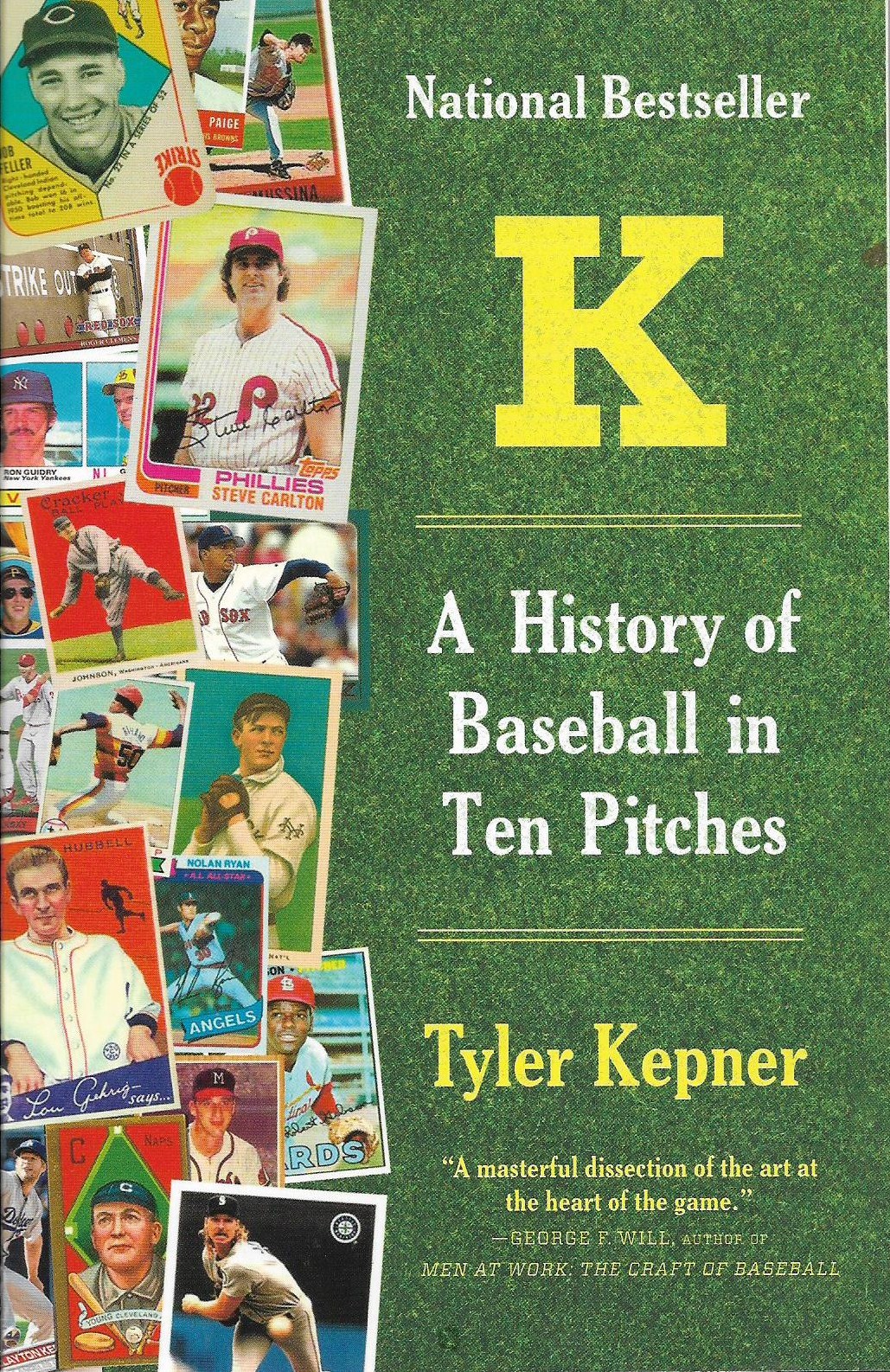 I even bought a book ... with cards on them. They were each hand-selected by Tyler Kepner for his book. I've heard good things about this.
So, I'll get there with card shows. Listen, I'm even a little uncomfortable going to shows when there's not a pandemic. I'm just not ready to be rubbing elbows with bros yet.

Billy Kingsley said…
I'm not yet either, but I have multiple diseases and a compromised immune system on the best days so I just don't feel it's worth the risk. They've been having them here in the Hudson Valley since August. About 15 minutes from home and outside in the parking lot when it's warm enough. Still not feeling it.
April 8, 2021 at 9:25 PM

Brett Alan said…
Yeah, I wouldn't be mad at all if the manupatch were retired, or at least mothballed for a while.

Getting my second dose of the vaccine on the 20th. Once I've had two weeks from that, I'll be happy to head back to shows. Looks like the red-letter day for me is the Garfield show on May 16. But until I'm fully vaccinated I'm still not going anywhere I don't have to.
April 8, 2021 at 9:42 PM

Nick said…
I figure if I waited a year, I can wait another few months. Hoping to get the vaccine in the next week or two, and even then I probably won't feel comfortable doing a card show until summer or so - maybe the National in August if that's still on.

Glad there were a few cards in there you need! At the very least, I'm looking forward to card shows so I can replenish my trade stacks again. My Dodger piles are running dangerously low, hence the Pilots & A&G minis!
April 8, 2021 at 11:08 PM

Nick Vossbrink said…
Not there yet either. I see photos of stuff reopening and my brain just says nope. Maybe once I get my firs shot things will change. But right now? I don't want to hang out anywhere.
April 9, 2021 at 12:01 AM

BaseSetCalling said…
I would sure like to open a pack of Fleer Tradition. I like the few cards I have from it. My favorite us a Blue Jays card with that little American flag on it.
April 9, 2021 at 1:30 AM

madding said…
I'm in the same boat. We've had our regular show here every month since last fall, but I just couldn't bring myself to do it even if I double masked and avoided everyone. I have my first vaccine scheduled for next week, though, which means that I might consider going to one by June or so.

From what I've heard and what I assume, the shows are not going to be anything like they used to be because of what's happened to the entire hobby, though. I'm not going to get my hopes up.
April 9, 2021 at 1:55 AM

bbcardz said…
Count me as one of those tentative guys. I'd just rather err on the side of caution. I just got my vaccine appointment for Sat. 4/10 (J & J). The gf had her first shot on Monday. I'll wait 3 or 4 weeks before I start feeling comfortable going to a card show. Until then I'll keep on quarantining.
April 9, 2021 at 5:13 AM

Fuji said…
The last card show I attended was a week before California went into a lockdown in March of 2020. I have a friend who might be co-promoting a show this summer. That's probably the first show I'll attend. I'm more inclined to start walking around flea markets... but two of the three that I usually hit up are still shut down.
April 9, 2021 at 8:47 AM

Old Cards said…
A few weeks ago, my friend wanted me to go to a show with him in Nashville (about 30 minutes away), but I declined for the same reason you guys have stated. Got my 2nd shot of the vaccine last Tuesday, so maybe I will consider it in the near future.
April 9, 2021 at 9:28 AM

GTT said…
The Tyler Kepner book is a really good one. My grandpa gave it to me a while back, and the author does a great job of capturing the essence of each pitch.
April 9, 2021 at 10:44 AM

Card bubbles said…
Got my second shot about a month ago. Ready to attend my first show in a long time in a couple of weeks. If I already left this comment I’m sorry.
April 9, 2021 at 3:40 PM

Jon said…
A lot of folks seem to still be hesitant to leave the house, hopefully they'll get over it soon. It's time to start living again. Personally speaking, I haven't been to a show in quite some time, but have went to plenty of other crowded places in the last year, and have remained Rona-free. Life is much too short for me to spend it hiding under the bed.
April 11, 2021 at 8:28 AM

AdamE said…
I would go to one tomorrow if I could but there are none around me. The last one I went to was probably in September. It was a mall show with only about 4 tables. I guess turn out was so bad they didn't have any more, to many people afraid to go out. Seems odd we just went through Spring Training here in AZ with no card shows but it is what it is.
April 13, 2021 at 1:36 PM