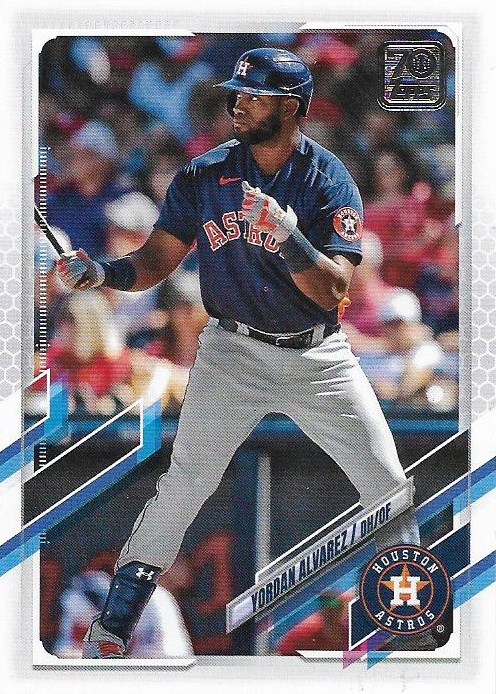 Back in October I posted about a potential new series where I celebrate cards that received a common, ordinary number that is meant for common, ordinary commons.
Admittedly, this series is based on the somewhat old practice of rewarding star players a card number that ends in a "0" or "5."
That doesn't happen as much anymore. I was reminded of that fact when I pulled the card of Yordan Alvarez in 2021 Topps. Alvarez is card number 300. Alvarez has done some impressive things in his short career, but he's also never played a full season, being a major leaguer for not even three years. A player like this would be laughed at back in the '70s and '80s if he was suggested as a "double zero" card number candidate.
I looked at the other players with double zeroes in their card numbers in Series 1. They are the more sensible Christian Yelich (100) and Jacob deGrom (200). But it's still pretty obvious that Topps is playing fast and loose with who gets the so-called hero numbers and has been much less strict since the mid-1990s. For example, in 2021, the Tigers team card is at No. 70, someone named Dalton Varsho is at No. 10 and Brandon Workman is at No. 160. Meanwhile, Blake Snell, who did just a few things in 2020, gets card No. 261.
Still, I'm pressing on with this series for at least one more time.
The premise is I will find 10 interesting cards in my collection at a certain card number (I've cut it down from the 12 I compiled the last time). Then I will find five other interesting cards at that card number that I don't have, but wish I did.
The card number I am choosing this time is in honor of the player I pulled out of my 2021 Topps blaster FOUR TIMES. 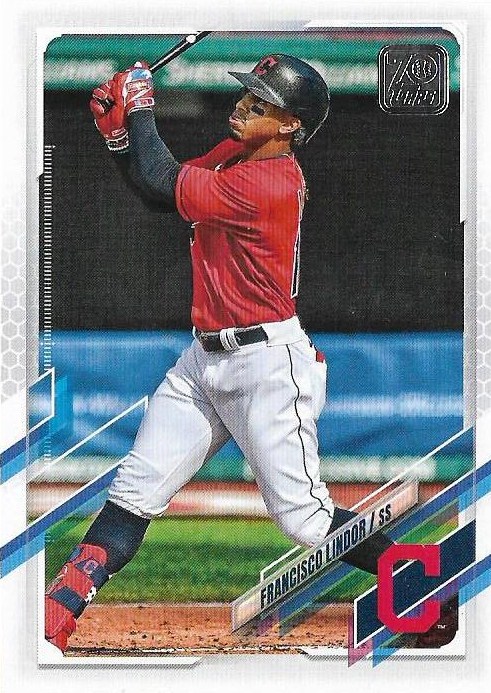 Francisco Lindor is a star player -- at least the Mets hope he still is. But Topps gave him card No. 309 -- the number of a common player in years gone by.
So let's see whatever cool cards I can find at No. 309 in my collection.
Here we go. 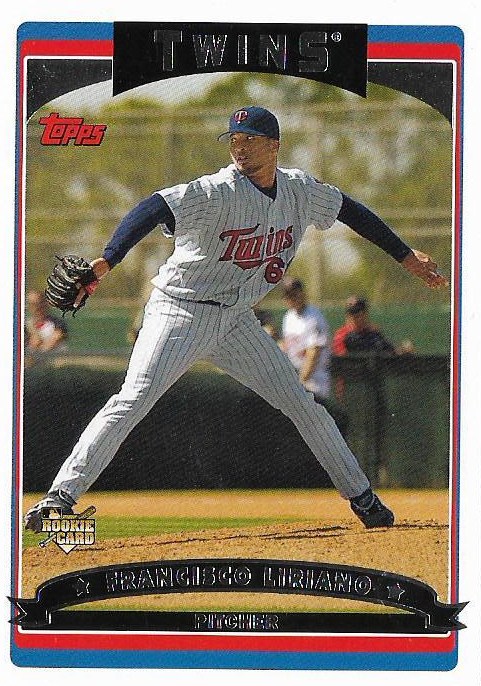 10. Francisco Liriano, 2006 Topps: It's always nice when you can look back at a card set from 15 years ago and know that some of the rookie card dudes produced decent careers. Liriano is still on a major league roster and still appearing on baseball cards and that makes this card cool. 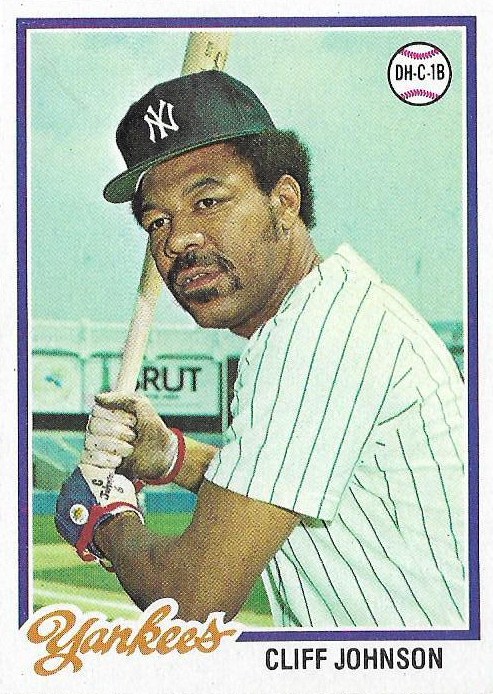 9. Cliff Johnson, 1978 Topps: This is Cliff Johnson's first card appearance with a new team after playing six years with the Astros. At the time of the trade to the Yankees (the Astros got Dave Bergman), Johnson's appearance in a Yankee uniform seemed very odd. That's what I think of when I see this card. It's also one of the few '78 Topps Yankees cards in which the player is posing. Most are action shots. And look how Topps had to squeeze "DH-C-1B" into that tiny baseball. 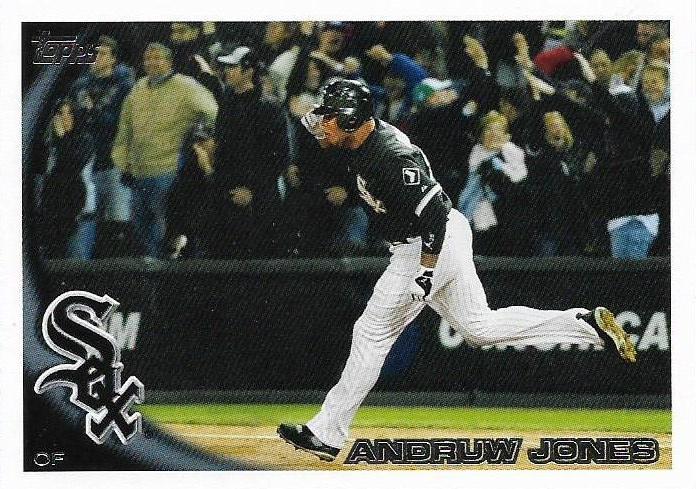 8. Andruw Jones, 2010 Topps Update: I was so pleased that the Dodgers no longer had Andruw Jones on the roster that I wanted to run excitedly right along with Jones in this picture. "The Dodgers don't have to pretend that an overweight .158 hitter is a starting player anymore!" I would exclaim. You'll never find a card like this with Jones dressed as a Dodger. I'm not saying he didn't have a couple of cool Dodgers cards, he did ('08 Masterpieces comes to mind). But he certainly didn't do anything to get fans out of their seats. 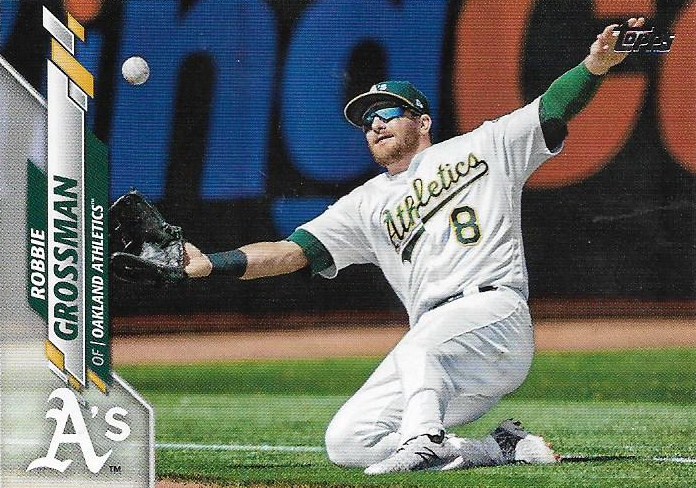 7. Robbie Grossman, 2020 Topps: Robbie Grossman has had his share of diving-catch-in-the-outfield cards but this is the best one as the anticipation is the best part of the photo. Grossman may not be the most exciting player-- the Tigers fan I know lamented his team's offseason moves by pointing out that Grossman was their primary signing -- but he has his share of exciting baseball cards. 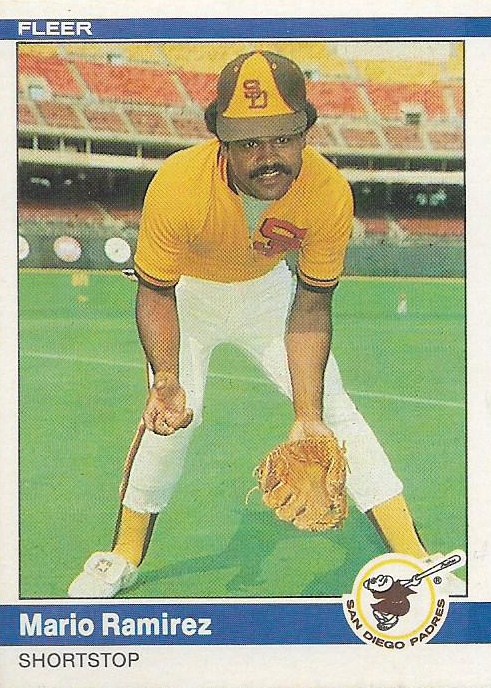 6. Mario Ramirez, 1984 Fleer: I don't know how Fleer did it, but it managed to turn an exceedingly common baseball pose into something interesting. I find this card amusing as Mario Ramirez seems to be having great difficulty posing this way. His hat is off-kilter, he's straining to keep his pose while looking at the camera. Yet, he still has a smile on his face! Or is that a grimace? 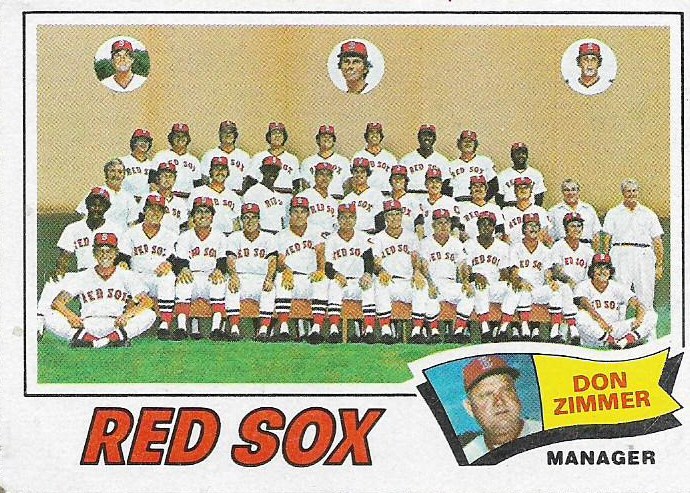 5. Boston Red Sox team checklist: The longer we are away from these team checklists from the '70s, the more I miss them. There is so much to study and in the Red Sox's case, there are those players who didn't make the team photo floating creepily above the rest of the team. 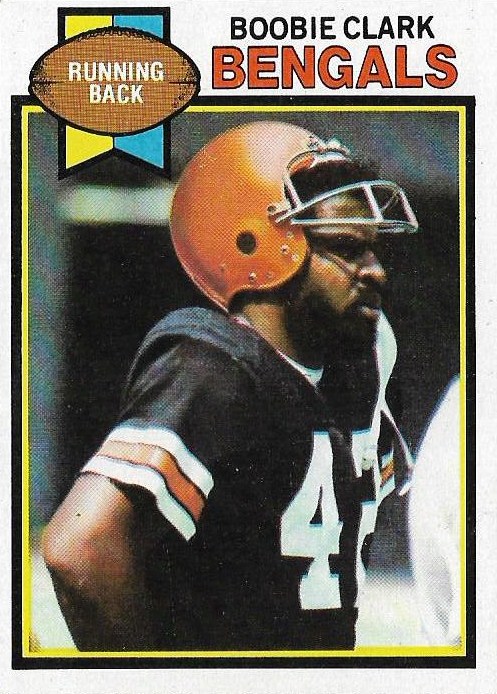 4. Boobie Clark, 1979 Topps football: A rare football sighting on this countdown, but there are plenty of interesting "commoners" in football sets, too. Boobie Clark was a regular in the Bengals' backfield in the 1970s and, oh, the hilarity when an apostrophe was added to the end of his first name. The best part of Boobie's card (there you go) is that Topps has no problems convincing kids that Boobie is Clark's given name. It's Boobie on the front and Boobie on the back. His given name was Charles. 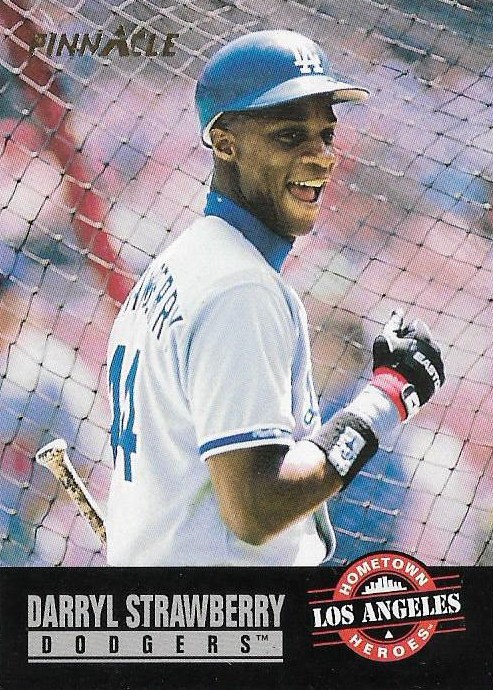 3. Darryl Strawberry, Hometown Heroes, 1993 Pinnacle: I'm a sucker for a happy ballplayer in the batting cage. It's especially enjoyable because Strawberry didn't have a ton of happy baseball moments with the Dodgers. But this may be his happiest card as a Dodger. 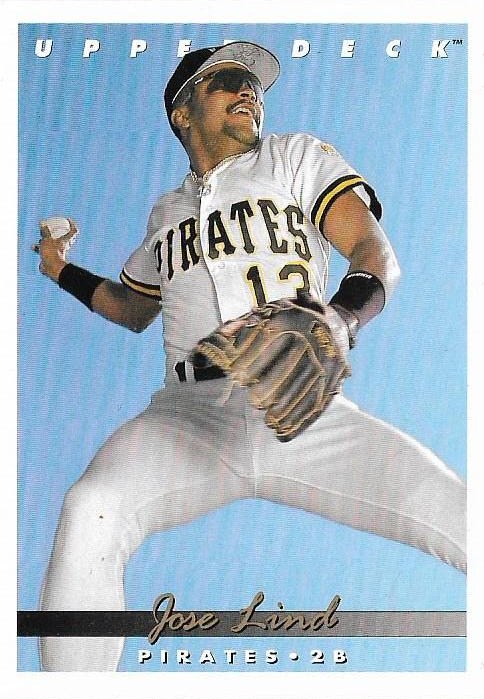 2. Jose Lind, 1993 Upper Deck: Upper Deck didn't fool around with hero numbers for the most part, which is why you'll see a lot of '93 UD in this series if I continue running it. The Jose Lind card is one of my favorites. I wonder what a full set of players shot while the photographer lies on the ground would look like? I bet it'd be pretty darn cool. 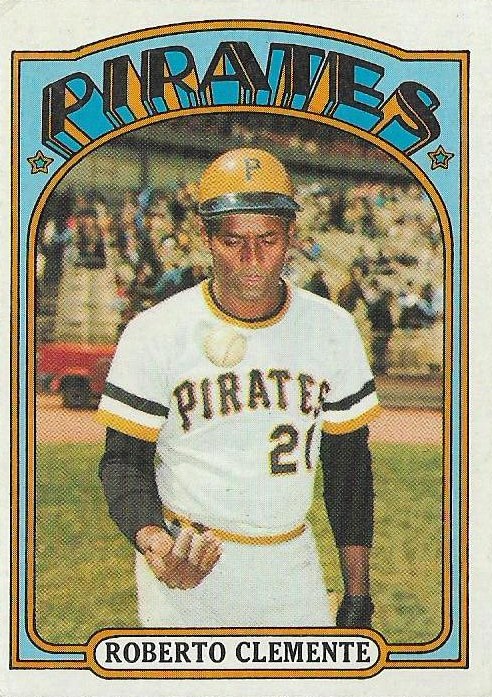 1. Roberto Clemente, 1972 Topps: We have another ringer! The top card in the first edition of this series was Carl Yastrzemski's rookie card from 1960. The reason Clemente's card didn't receive a zero at the end of his card number is because in '72 Topps created "In-Action cards" for some players and those In-Action cards immediately followed the player's regular card. Maybe because Topps wanted those cards to be special, it would position the stars at a card number ending in "9" with the In-Action card following with a zero card number. This card is, of course, a classic and I still think it would have made a better final card than the '73 Clemente.
OK, now for five No. 309 cards I wish I had (and maybe someday I will): 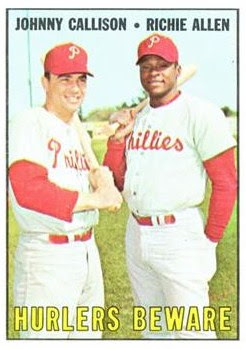 1. Hurlers Beware, 1967 Topps: If I hope to complete this set someday, I need to grab this card. The combo cards in this set are tremendous (2016 Heritage paid tribute to it with a couple Phillies high-fiving at home plate at No. 309, which doesn't exactly have the same effect). 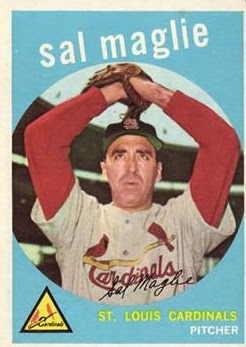 2. Sal Maglie, 1959 Topps: I had no idea that Maglie pitched for the Cardinals until I saw this card while researching the card number. He appeared in 10 games for St. Louis to close out his career in 1958. 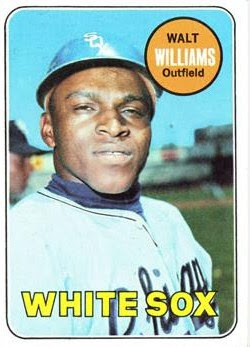 3. Walt Williams, 1969 Topps: I think I might've had this card once. It's totally unacceptable that I let it go. 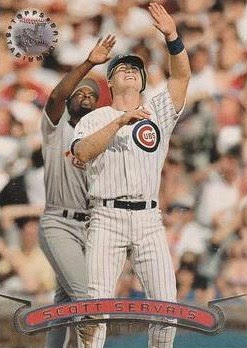 4. Scott Servais, 1996 Stadium Club: What is going on in this photo? It's either the weirdest baseball play ever or aliens are landing at the ballpark. 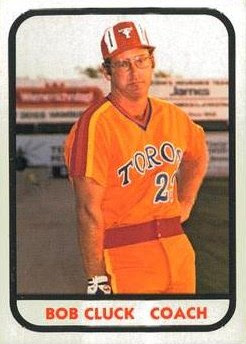 5. Bob Cluck, 1981 TCMA Minor League: NEED IT! Not only does Bob look Clucking fantastic in those wonderful Toros '70s uniforms but I once interviewed him when he was the pitching coach for the Houston Astros. So I absolutely have to have this card!
All right, so that's plenty of mileage for card number 309. Please treat this "common" card number with respect in the future.

John Bateman said…
Wow. A sighting of my favorite card of all time, the 1972 Topps set is the first set I collected, I was living in Pittsburgh, the Pirates won the World Series six months before the card came out and Clemente would die a six months later after the card came out.

Fuji said…
I cheated and did a quick search to see if Gwynn or Rickey had any 309 cards. Didn't see any of Mr. Padre, but The Man of Steal has a SP card from last year's flagship set. Still not enough to unseat Clemente though. From what I found on COMC... it's easily the greatest #309 in the history of sports cards.
March 7, 2021 at 8:24 PM

Brett Alan said…
Nice touch with the number from the back of the card with each entry. Funny how the first two in this post are both Francisco Li....

Sal Maglie was on Nick's Short-Term Stops team for the Cardinals, with that same card showing, so I'd say you should have remembered that, but I didn't, either!
March 7, 2021 at 10:20 PM

madding said…
Andruw Jones played for the White Sox?! I do not remember this at all!

bbcardz said…
Love seeing cards from '69 and '72 featured here. Great selection of cards--except for the 2010 Topps Update Jones. He holds the title of Worst Dodger Player Ever. He was a total disgrace to the uniform and like you, I was so glad when he was gone.

hiflew said…
I absolutely love the Mario Ramirez card. He reminds me of a newborn wildebeest trying to stand up for the first time before the predators get him. Fantastic.

The floating heads on the team card almost look like an "In Memoriam" type deal. Very unsettling.
March 8, 2021 at 4:35 AM