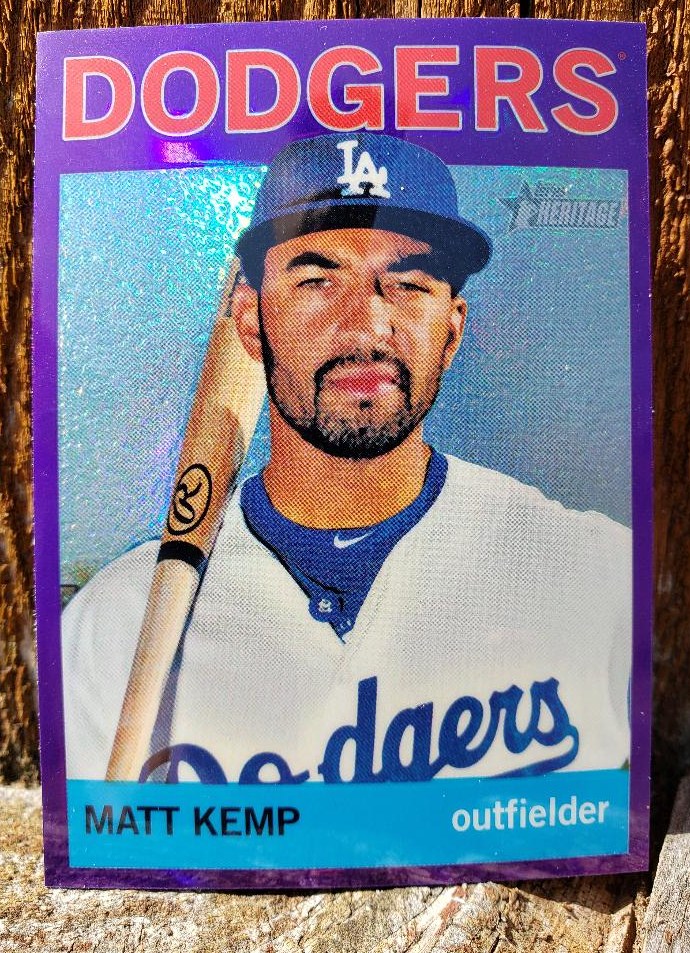 I enjoy picking up snazzy chrome cards of forgotten or discarded Dodgers for cheap.
It's amazing to me what collectors kick to the curb so callously in pursuit of the latest and greatest.
And so with a recent quick Sportlots order I nabbed the following four: 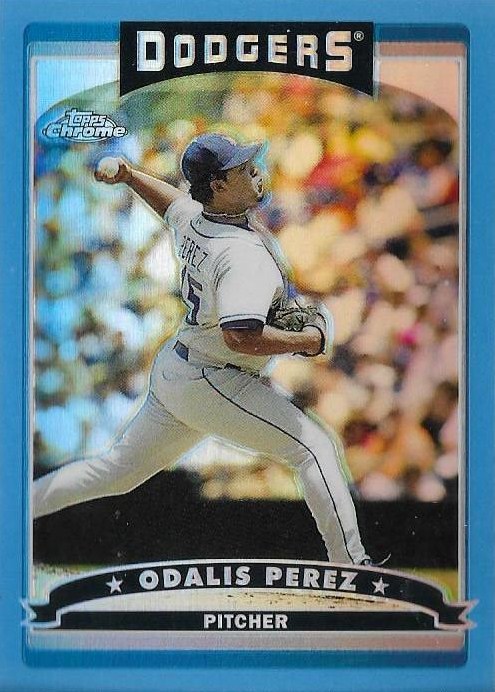 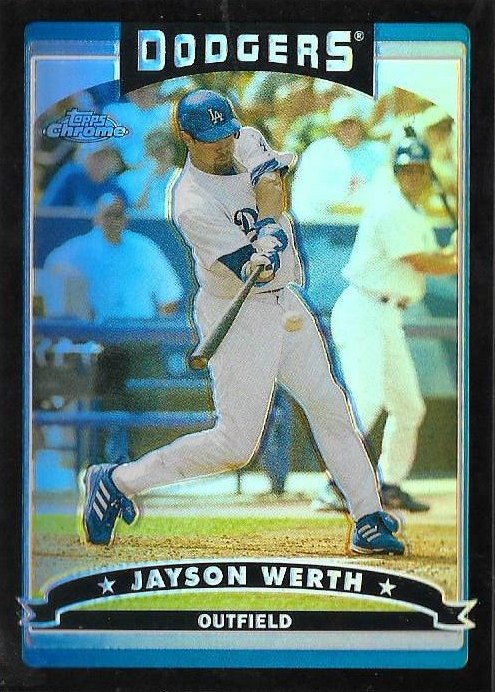 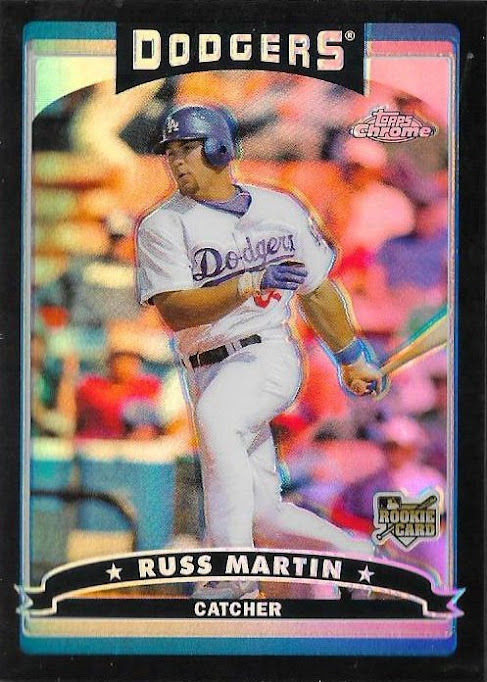 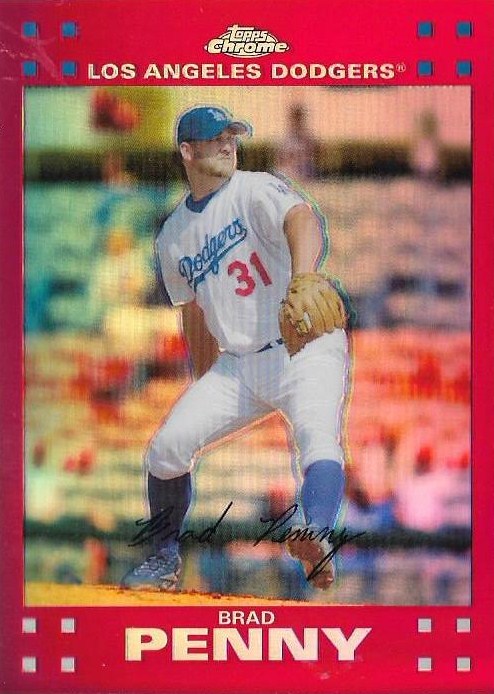 It's nice to be a veteran of card collecting and of baseball watching so you have the memory of when all of the above were a big deal ... well, maybe not Odalis Perez.
And speaking of memories, this year marks the 25th anniversary of Topps' Chrome brand. It began in 1996 and what a phenomenon it's been. Chrome has also been pretty darn polarizing.
To some collectors, they are the most ridiculous cards, basically asking collectors to buy the same card twice. To others, they are the most glorious cards ever made and really the only collectible cards worth their time.
As usual, I fall somewhere in the middle.
I enjoy Chrome quite a bit, but it was a bigger deal for me a few years ago when Topps designs still had borders. Ever since 2016, Chrome hasn't meant much to me.
On the other side, I have very little interest in the first six years or so of Chrome. The brand (the technology actually showed up a few years earlier with Finest) debuted during a year in which I didn't collect or purchase a single card. 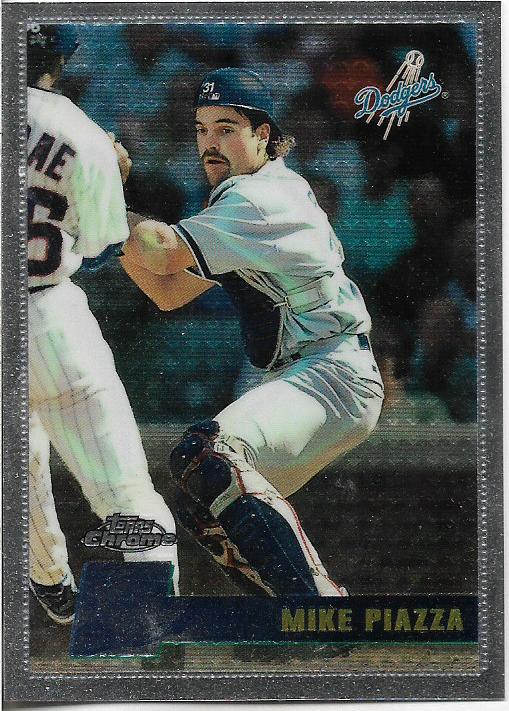 Those first Chrome cards don't look that great in comparison. although I'm sure they were a big deal at the time. They don't scan well at all. Poor Mike Piazza here will be the least shiny card you will see in the whole post. (The fact that it's not a refractor and most of the others are has something do with it).
Also, what was with all the dots running through the first Chrome cards? It's not a good look.
To commemorate this anniversary I thought I'd pull out my favorite Chrome cards from my collection. Obviously, they're all Dodgers.
Also, to take advantage of the arrival of spring weather, I decided to photograph the cards outside in the sunshine, so you can see the shiny cards as they were meant to be seen, with the sun beaming down on them as God intended.
Here are some of my favorite shinies: 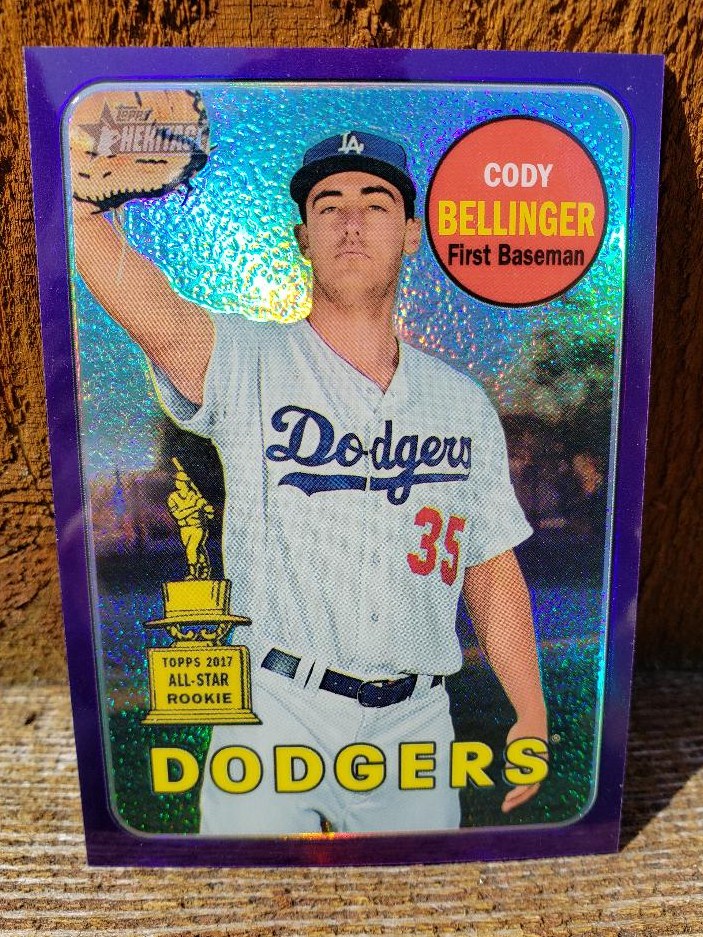 13. 2018 Heritage Chrome purple refractor Cody Bellinger: The Heritage purples that sometimes pop up in "hot box" blasters are always cool. I've experienced the thrill of pulling one per pack. They almost always turn out well, which is unusual because normally I don't like chromed-up cards of old designs. This particular card is enhanced by the monster rookie trophy of the era and Bellinger's cool pose. 12. 2015 Topps Chrome pink refractor Clayton Kershaw: Topps has been in the habit of including unnumbered pink or orange chrome parallels in its fat packs over the years. Most of the pink cards don't leave much of an impression but the 2015 cards are an exception because of the magnificent borders. This is one of Kershaw's best base-card photos and notice the dead plant tickling his chin! 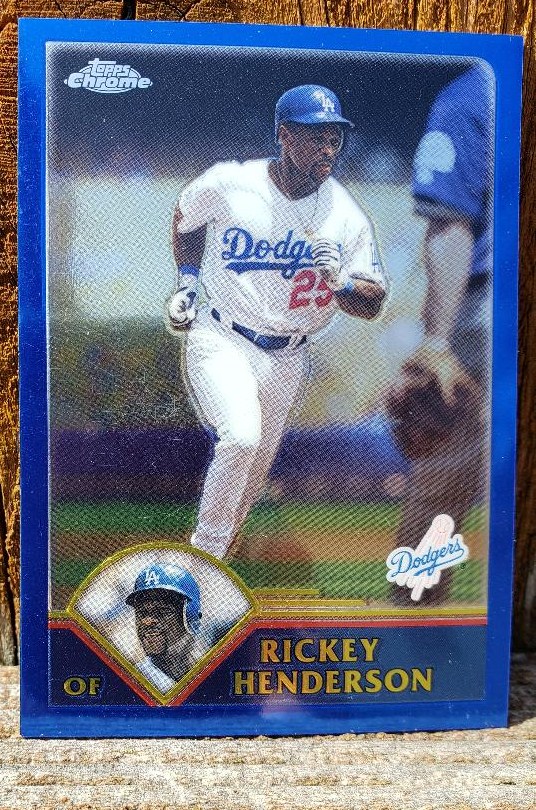 11. 2003 Topps Chrome Traded Rickey Henderson: To me, the golden age of Chrome is 2003-2015. Chrome was really rounding into form in '03 with those magnificent blue borders, which look fantastic. Chrome would kick it into overdrive with the return of white borders in '04. 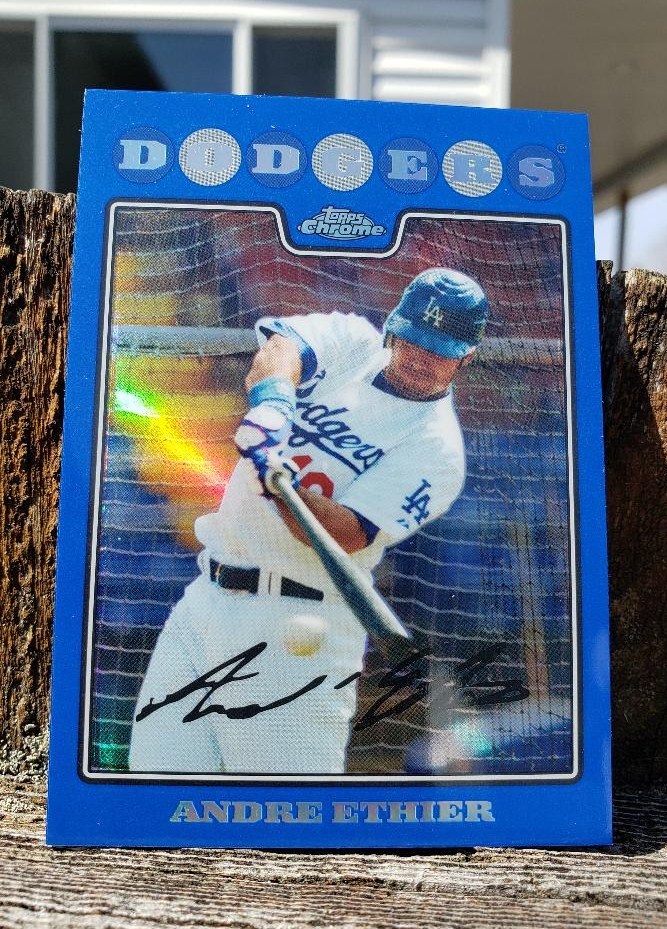 10. 2008 Topps Chrome blue refractor Andre Ethier: This was my favorite Chrome card the instant it came into my collection. The fat '08 Topps borders make the colored Chrome cards stand out. And Ethier's batting cage swing is perfect. This also is probably the best shade of blue that Chrome has ever used. 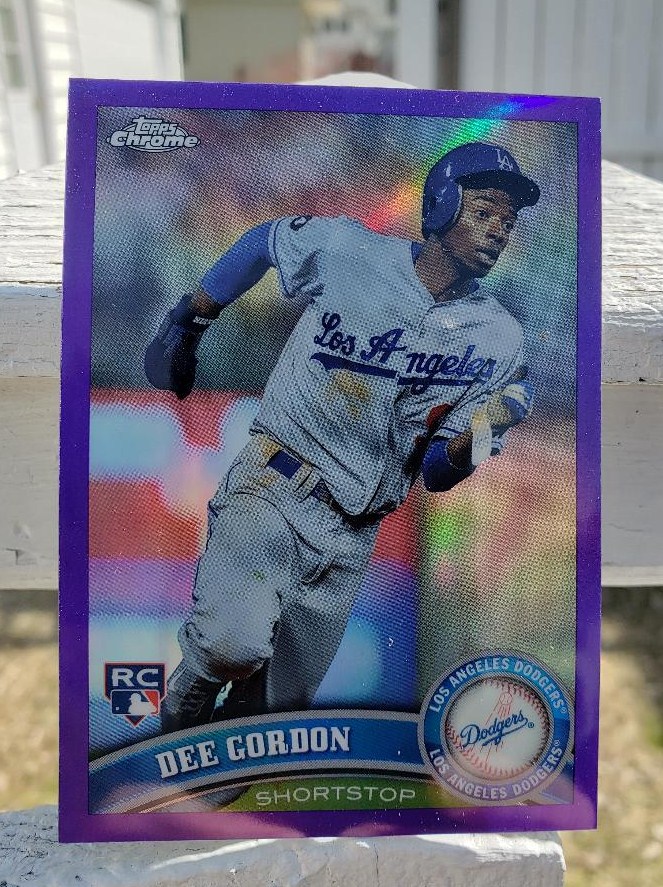 9. 2011 Topps Chrome purple refractor Dee Gordon: This is the first numbered card on this list and it's Gordon's rookie card. Topps went with a different photo of Gordon for the Chrome card than the leaping shot in the Traded set that I liked so much. At first, I was disappointed until I realized how great this one is, too. 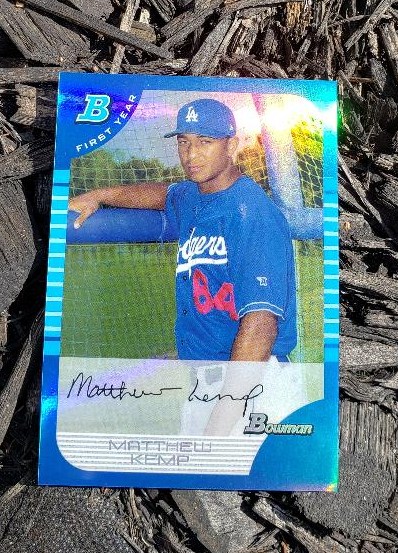 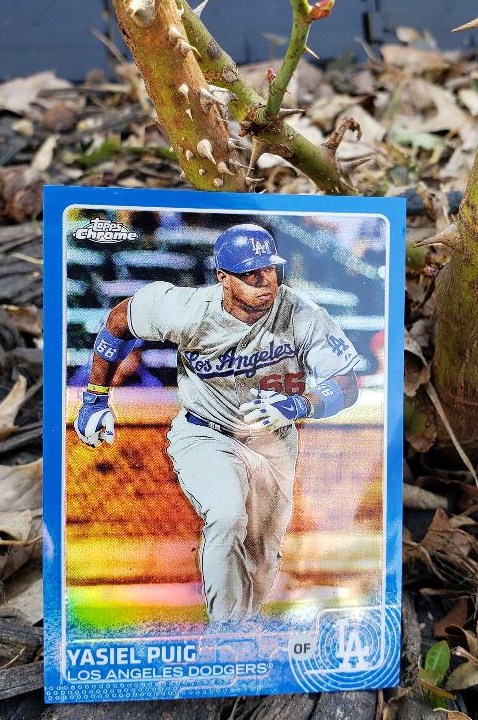 7. 2015 Topps Chrome blue refractor Yasiel Puig: Beautiful card of the player that some found too prickly for their delicate baseball-played-my-way selves. The 2015 blue cards are right up there with the '08 blue cards. The 2015 ones are numbered but the '08 ones aren't. 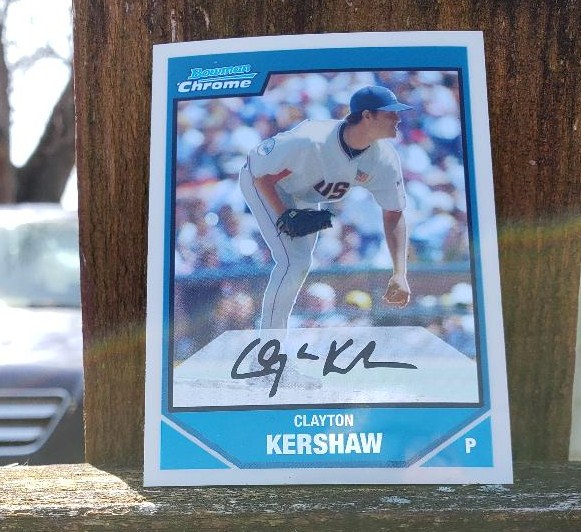 6. 2007 Bowman Chrome Draft Picks & Prospects Clayton Kershaw: The only plain-white border card on this list. I'm as big of a sucker for early-year Kershaw cards as most collectors. I am fortunate that I was able to get some of them before folks knew who he would become. 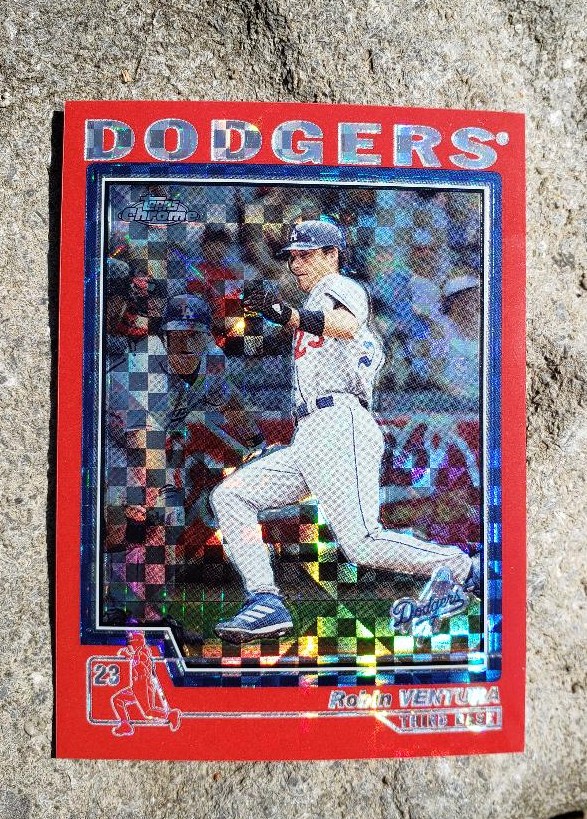 5. 2004 Topps Chrome red xfractor Robin Ventura: How the heck aren't these numbered? As much as like blue refractors because they match with my favorite team, the red ones really stand out and are often the most-elusive. 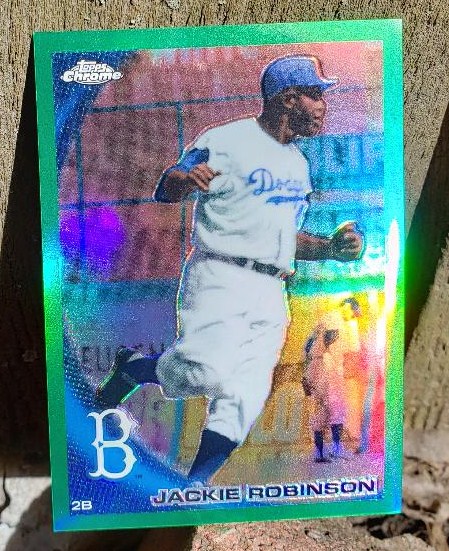 4. 2010 Topps Chrome wrapper redemption green refractor Jackie Robinson: The image doesn't exactly translate well with the sun shining on it, but it's a great card. The best thing about this card is probably that it is one of the only 2010 Chrome cards I have that is flat. I still think Topps needs to issue a recall on 2010 Chrome. 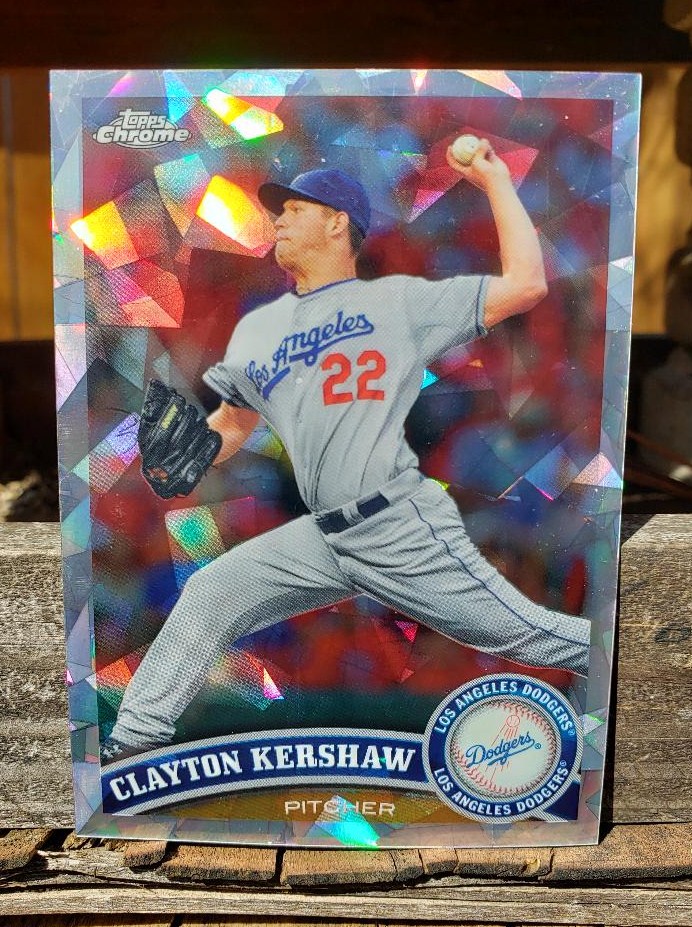 3. 2011 Topps Chrome atomic refractor Clayton Kershaw: Love the atomic refractors from 2011. It was a proud moment when I obtained this card. In the picture, it is balancing on the bird house in our backyard and the card flickered as the wind blew the house gently back and forth. 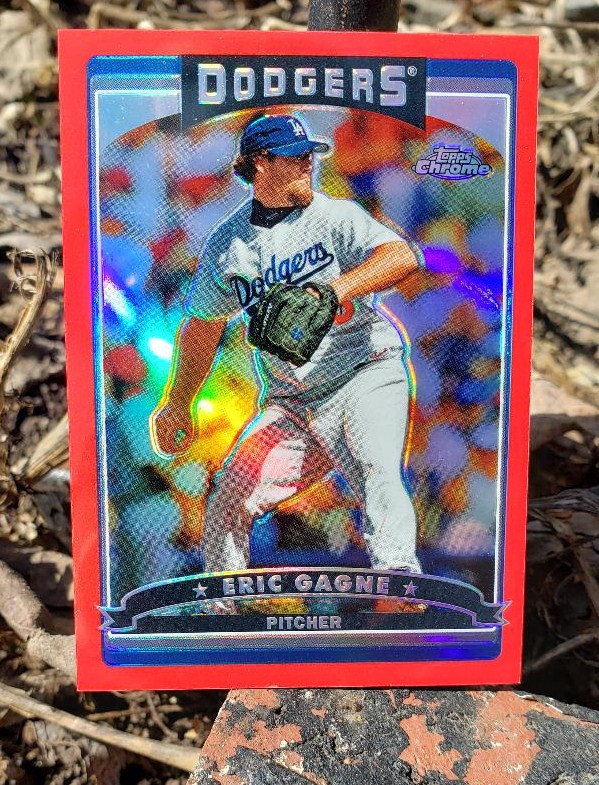 2. 2006 Topps Chrome red refractor Eric Gagne: 2006 red refractors are phenomenal. Eric Gagne cards are completely ignored, which is why I have two versions of Gagne's black refractor from this set and other stupid things I shouldn't have. I don't care what people say about Gagne. I interviewed him in person on the turf at Olympic Stadium in Montreal and ... send all his cards to ME! 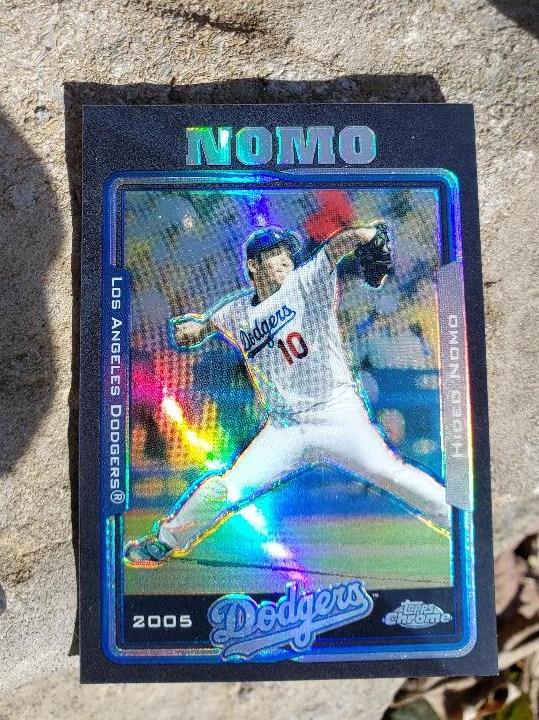 1. 2005 Topps Chrome black refractor Hideo Nomo: The black refractors from '05 Topps is probably peak Chrome. It's Chrome's version of the 1971 Topps set. Just beautiful and bad-ass.
The picture didn't come out the clearest so here is the card scanned: 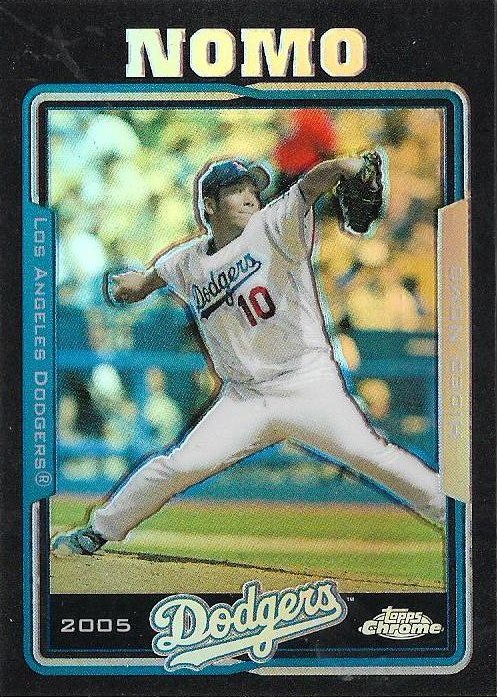 Of course, Chrome picks up all the marks and specks on the scanner.
It is a temperamental set and not for everyone. But I'm still pretty happy that Chrome came alive in that year 25 years ago when collecting was completely dead to me.

Hackenbush said…
I still find scanning to be the most efficient but when done right I think most cards look better photographed. I like shiny cards but they don't often fit into my collecting goals, whatever they are.
March 23, 2021 at 7:40 PM

Nick said…
I wouldn't be sad if Topps discontinued the Chrome brand, but it's a bit hard to imagine a card year without it. If nothing else, I'd miss the refractors - love everything you showed here, especially those 2006 ones. That design seemed to work really well with the Chrome treatment, for whatever reason.
March 23, 2021 at 8:22 PM

Johnnys Trading Spot said…
Lots of big time shiny here for sure. Several PC guys too. I too am not a fan of chrome whether Topps or Bowman.
March 23, 2021 at 10:41 PM

Fuji said…
As I was scrolling down... I was secretly hoping your #1 spot would belong to Nomo. Your post actually motivated me to buy my first baseball card in over a month. I just purchased Nomo's 2004 Chrome refractor on eBay. I've wanted that card for a very long time.
March 23, 2021 at 11:58 PM

Jay said…
Great post, Greg. I fall in the middle on Chromes just as you do. Once I completed all my Heritage Giants team sets - base cards - I’ve moved on to the Chromes, and while it is a little odd to buy the same card twice, they look pretty fantastic in the binder.
March 24, 2021 at 12:39 AM

BaseSetCalling said…
The way Topps counts anniversaries, I think last year was Chrome’s 25th. Maybe if it wasn’t the topsy-turvy year that it was, they would have noted that.

Some day I want to decorate a Christmas tree with topladers double loaded with shiny cards.
March 27, 2021 at 5:23 PM