The man behind my baseball card cartoon obsession 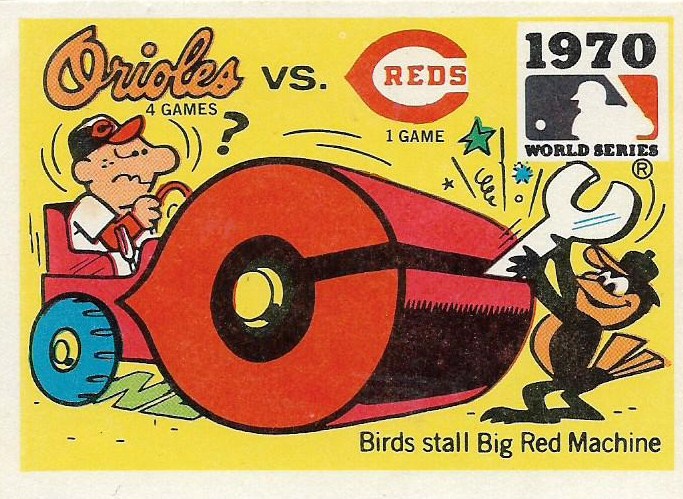 There is, without a doubt, a cartoon gene that runs through my family.
I'm not sure how far back it goes or who had artistic talent even a couple of generations ago. My mom liked to create art, greeting cards and pottery and stuff like that. But that's about all I know.
But my brother and I loved drawing and especially cartoons. We both drew our own cartoons when the mood struck us. My brother, in particular, caught the cartooning bug, even attending an early evening cartooning class for a few months. Both of us can still draw, although I don't think either of us does that much anymore.
This also explains my daughter's love for art as it pertains to drawing and graphics and it's now her profession.
There is something very old-school about appreciating the art of cartoons and drawing. (A few weeks ago, a co-worker who is not even in his mid-20s, when a few older fellow employees were mourning the disappearance of few too-expensive comics in the newspaper, announced: "who reads cartoons?"). But I can't get out of that mind-set. I devoured the comics when I was a kid, even cut out the daily strips and collected them. I had favorites. I had ones I hated. I critiqued them. My brother did, too. It was a huge part of our world.
This is why I enjoyed the cartoons on the backs of baseball cards so much and lament their disappearance. And now I'm going to talk about something else younger people don't appreciate: Laughlin baseball card cartoons. 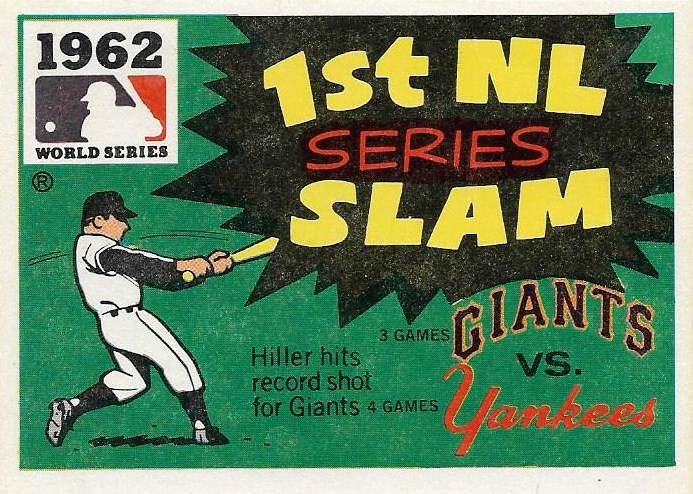 I love these things.
I've written about them on the blog before. (My blog is basically a daily regurgitation at this point). I first discovered these cards as "stickers," as Fleer issued a set of the World Series retrospective in 1980 with team stickers on the back (or the cartoons on the back, whichever you prefer).
But even before I saw those stickers in the store, the cartoons were always around. I probably saw them in advertisements and the like. Robert Laughlin's art was everywhere in the '70s.
I love his cards so much, in fact, that I wrote a magazine article about him: 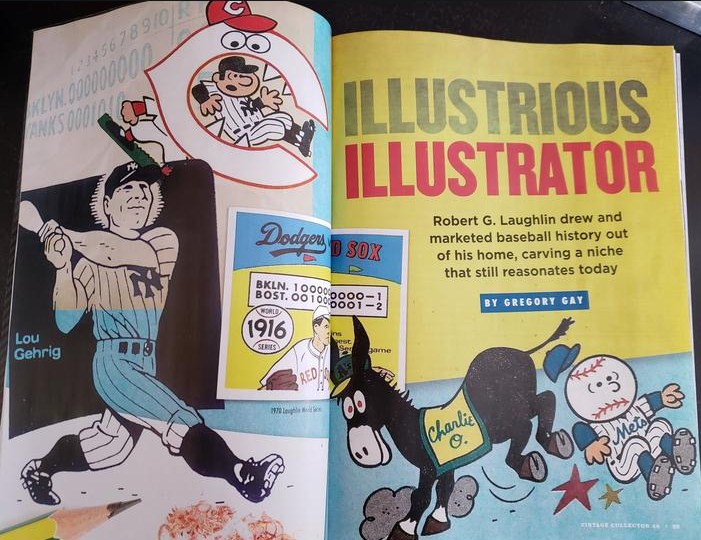 It's in the latest edition of Beckett's Vintage Collector magazine, which is arriving in subscribers' mailboxes now and should be at newsstands by the end of the month.
(By the way, reader and collector Rich emailed me recently to say that he spotted 2021 Topps for sale at Barnes and Noble. So you can now go there and pick up my article and buy some cards!)
This article is about artist and cartoonist Robert G. Laughlin, an enterprising sort who sold his card drawings out of his home, partnered with Fleer for several '70s sets and continued to make art and cards even after his relationship with Fleer ended. Laughlin passed away in 2006 and there's really not a lot about him out there.
This made the article as challenging as any I've written for Beckett. Not only was I dealing with limited information on someone who died 15 years ago but his story is filled with legal copyright issues and conflicting info on the internet. Confusion is everywhere.
For the most part, I was able to track Laughlin's sets -- both the ones he drew himself and the ones for Fleer -- and the dates for those sets, as well. But it wasn't easy. For example, there are a lot of references to Laughlin's initial World Series set, drawn in black-and-white, as being produced in 1968. But it was produced in 1967.
The discrepancy comes from the copyright listed on the back of the 1970 and 1971 World Series sets that came out after Laughlin took the job with Fleer. 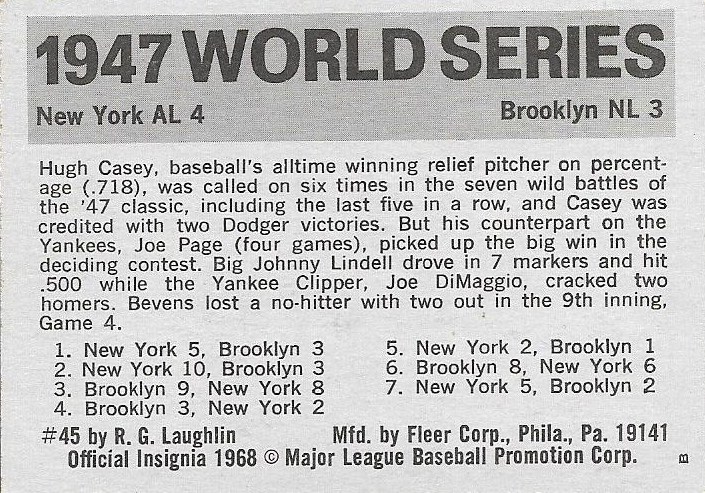 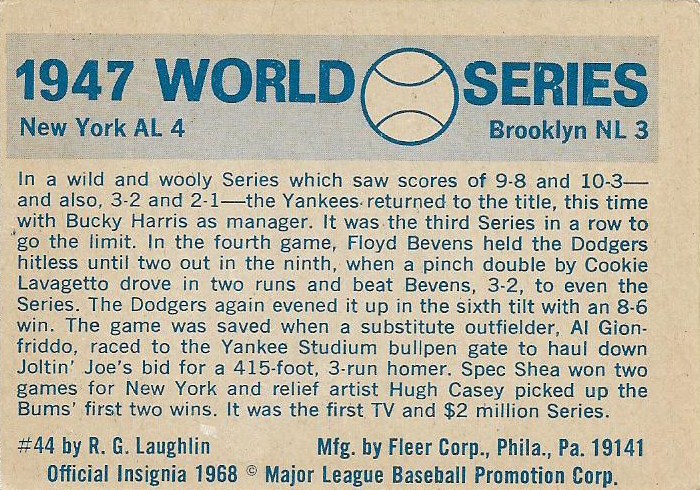 The top card is from the 1970 Fleer World Series set and the bottom one is from the 1971 set. Notice that both read "1968" at the bottom. That leads folks to believe that this is a reference to the original set and that it was issued in 1968. But that copyright does not pertain to the set but to the MLB copyright. The original cards from 1967 -- which are rather rare -- display a 1967 copyright.
So, anyway, there is a lot of explaining like that in the article. I thought it was necessary to clear up the confusion on all of Laughlin's sets, when they were issued, etc. The 1971 set is a repeat of the 1970 set in a lot of ways, which adds to the confusion. Then add those stickers from 1980 and you don't know what you have in your hands half the time. 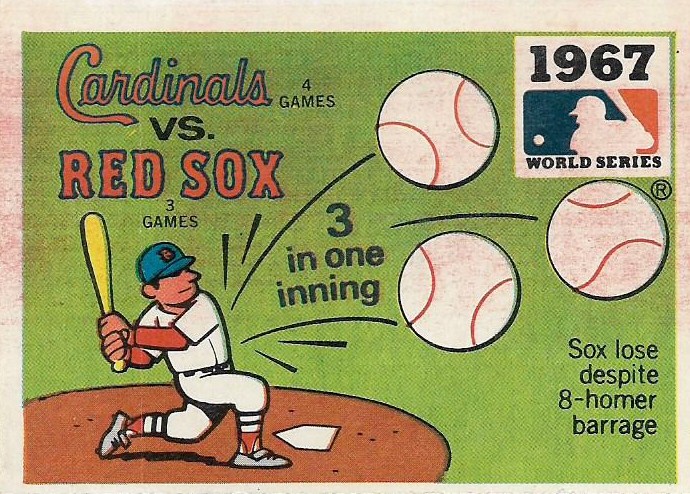 But I didn't want to the article to get bogged down with "inside baseball" details even though I felt they were necessary. As I was researching for the article, I wished I could humanize it a bit, humanize Laughlin, even with the limited information and time that I had.
So, I took a shot. And I tracked down Robert Laughlin's grandson.
He graciously gave me lots of details about his grandfather, who he remembers quite fondly. And I was able to incorporate that info in the magazine story. There is stuff about Mr. Laughlin's life in there that you won't find anywhere else and I am quite excited about that. At last, Laughlin's story has a face and a personality, even if there still isn't much out there as far as how he became inspired to create his cartoon cards. (I did find out he was a big Yankees fan with a large memorabilia collection). 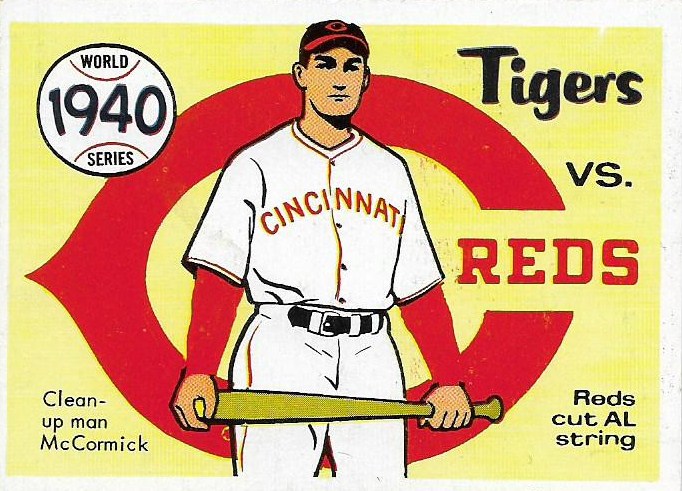 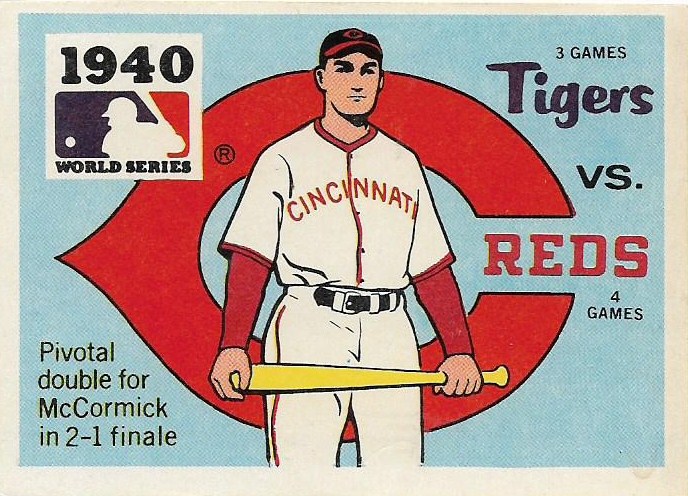 I didn't know what I was getting into when I was buying those Fleer stickers in 1980. I just knew I liked the cartoon depictions of past World Series and collected what I could. I still have those stickers.
But I didn't know about all of the variations, how Laughlin had to remove references to particular players in set updates because Fleer didn't have a license with the Players Association. Years later, I still couldn't tell the difference between the 1970 and 1971 World Series sets. I just knew I liked the art. 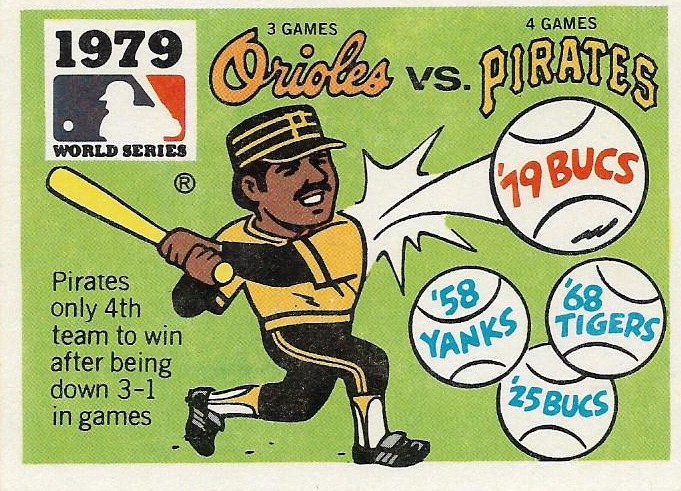 This is a cartoon drawn for the 1980 sticker set, to update with the 1979 World Series. There are other updates to the 1971 World Series set that are harder to find. There is a Clemente card remembering the 1971 Series that is also hard to find because Fleer had to remove the card after a call from the Clemente estate.
I would love to collect all of the cards in all these World Series sets but there is a lot to search out and some of it is tricky. It's not particularly expensive for the most part. But I'll probably just take what I can get when I can get to it. 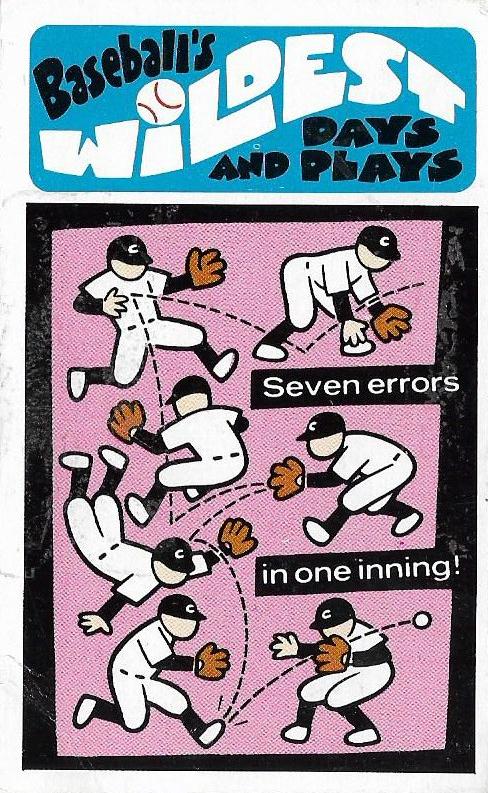 Laughlin also drew various "tall-boy" sets, both for Fleer and issued by himself, during the '70s. They're full of history, informative, witty and the cartoon drawings are perfect.
I considered it a privilege to write the article and talk to Laughlin's grandson. Part of me hopes it came out OK because there was so much to assemble.
Some may consider this just an old cartoonist's story. But when you look at what's going on today in cards, how artists are creating new cards for Project 2020 or Project 70 and how that's inspired budding card artists to make and sell their own cards online, it all comes back to Laughlin. He did it all 50 years before any of this, selling card art out of his home.
He was a pioneer.
He is one of my hobby heroes.

Johnnys Trading Spot said…
YEP, love me some Laughlin. I am slowly building all of those sets. I had to track down the history of them too.
March 5, 2021 at 7:12 PM

Shlabotnik Report said…
Looking forward to reading the article! I only have a handful of the World Series cards, but I always intend to make them more of a priority.
March 5, 2021 at 8:07 PM

Nick said…
I've never been big on baseball-card cartoons, but these Laughlins are a huge exception to that rule. I absolutely LOVE these things. My dad recently stocked some 2021 Topps at a Barnes & Noble vendor gig (I was as surprised as you were) & I'll have to get him to pick up this month's Vintage Beckett next time he's there because your article sounds like a real treat.
March 5, 2021 at 9:49 PM

Swing And A Pop-up said…
Congrats on getting another article published. I was just at my LCS today putting a down payment on a package of toploaders...I'll have to look for your article next time I go.
March 5, 2021 at 9:59 PM

CaptKirk42 said…
Love the Laughlin cards. Some of my earlies memories of getting baseball cards was getting some of the 1970 (or maybe 71) Fleer World Series cards. I seem to recall as a kid having a mix of both, but in later years what I had left were just 1970 and in recent years completed that set, need to get around to completing 71 set. Anyway some of my first memories are getting some rack packs of one of those sets, from some kind of department like store in a mall. It might have been one of the toy stores in a mall and I was just confusing which stores we were in that trip, or where we made purchases.
March 6, 2021 at 1:09 AM

CinciCuse Bill said…
Very interesting. I’ve often wondered about those cards, especially the 67-71 cards. Congratulations on another article. I look forward to reading it.
March 6, 2021 at 9:20 AM

Fuji said…
That's awesome that Laughlin's grandson was able to help you learn more about his grandfather... and that you were able to share this info with collectors who grew up looking at the artwork he produced.

I enjoy drawing too. I'm not good at it, but I typically do every project I assign my students... and at least half of them involve drawing something.
March 7, 2021 at 11:22 AM

When I came back to drawing a few years ago, I had plans to try my hand at a few different styles that I had never attempted as a kid. None of them ended up holding my interest for very long, and I quickly fell back into my old comfort zone... cartoons! I draw pretty much daily now, always cartoons. It's a great form of escapism.
March 7, 2021 at 1:53 PM

Roger said…
Have enjoyed your column for years. In 1973, I wrote to Robert Laughlin, and he kindly wrote back with some information about his cards sets that you might find interesting. Would like to send you a copy, but do not have an address for you. Would be willing to send it to you at Beckett if you would prefer. Am not a scan and send type, as I am a bit old and old-school. Thanks!
March 7, 2021 at 9:11 PM

Matt said…
Count me among the many who always loved his artwork! I'll have to see if my local Books-A-Million has the magazine when it comes out.
March 8, 2021 at 12:20 PM

BP said…
I love the Laughlin sets too. His cards were perfect for a kid in the early 70s. And the Fleer gum was pretty ... interesting.