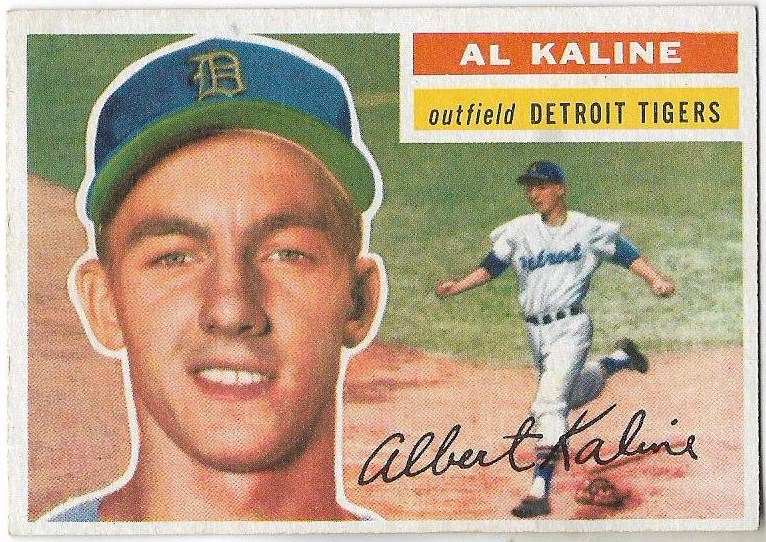 There is really no explanation for me suddenly being able to make such swift progress on the 1956 Topps set other than that "the stars aligned."
For decades, the total number of '56 Topps cards in my collection sat at around 120, each one obtained on a single, glorious early 1980s evening, a gift from my dad's co-worker, someone I had never seen and I still don't know his name.
Those were the cards that ignited the spark, that this was indeed one of the greatest sets ever made and would be amazing to complete ... you know, in another dimension, where objectives that were obviously impossible became possible.
Sure, I now owned one-third of the set. But outside of the Newcombe, Erskine and Slaughter cards, I had no big stars. None of the cards were Yankees, the team of choice of whoever gave us the cards.
Then the rest of the 1980s happened and cards became "an investment." The prices for those '56 cards, especially the stars, shot up. As the years moved on, the prices grew and grew, I exited the hobby, and by the time I returned, there was no way I could pay those prices. Besides, so many other cards I wanted were more affordable.
Completing the '56 set was a distant, distant, distant goal. Somewhere up there in the Emerald City where wizards hand out wishes.
Then, in the past five years or so, '56 cards of Robinson and Koufax found me.
I bought a cheap copy of the Banks card at a card show.
Somebody -- still don't know who -- sent me the Feller card. Another person sent me the Berra card.
In the past two years, I acquired the Williams card.
And the Aaron card.
And the Mays card.
And the Clemente card.
Stars were aligning.
With six cards remaining, I zeroed in on a fairly immaculate copy of the Al Kaline card. There is no real reason behind why some of my '56 cards are in ideal shape and some could be better. I simply have to be happy with what I am acquiring at the time. And that spiffy Kaline card made sense to me.
Five cards to go.
Fellow collectors had been noticing how close I was getting and that's always cool. I appreciate the help. These cards aren't cheap you know.
Max of Starting Nine nicely sent along the the final "high-numbered" card I need for the set. 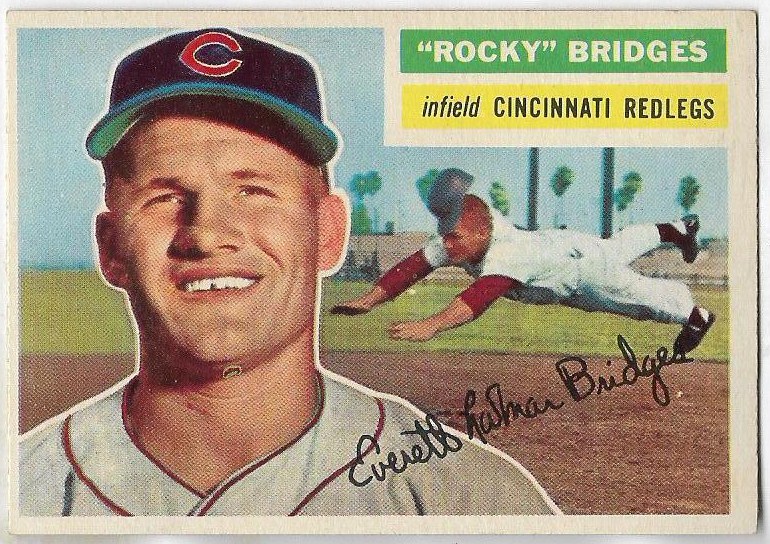 Wonderful card.
Four cards to go.
This is a '56-themed post, but it would be poor form not to acknowledge some of the other cards that Max sent along with the Rocky card. 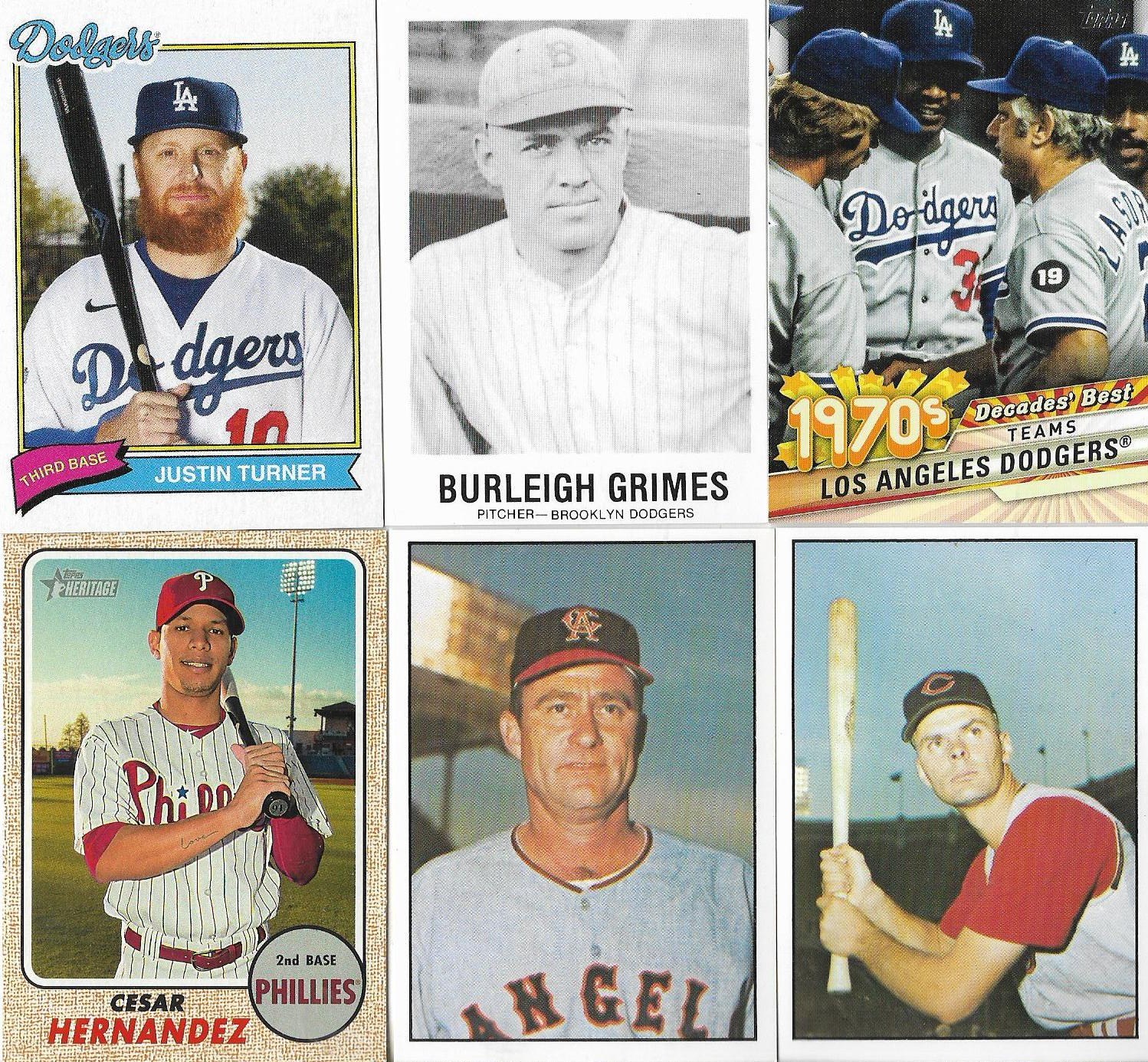 Justin Turner, featured on a 1970s tribute set but born in 1984, and the wonderful Burleigh Grimes TCMA/Galasso card are both needs. The Dodgers' '70s tribute at top right goes in the night card binder, I don't care who else is in slot No. 24. The rest are "dusk" cards, I don't really have a dusk binder. 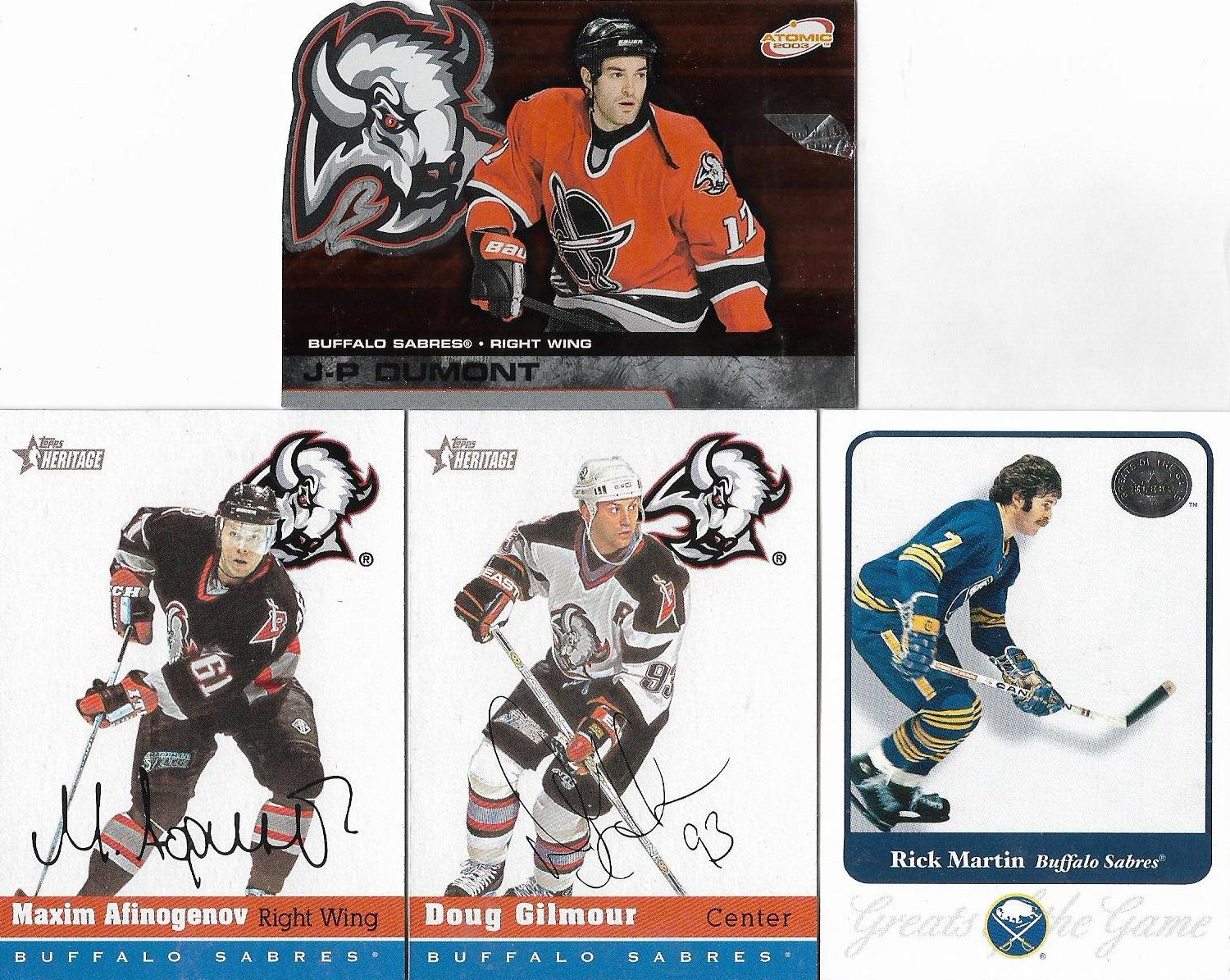 Also, some Sabres cards from back when the Sabres had a clue about playing hockey. 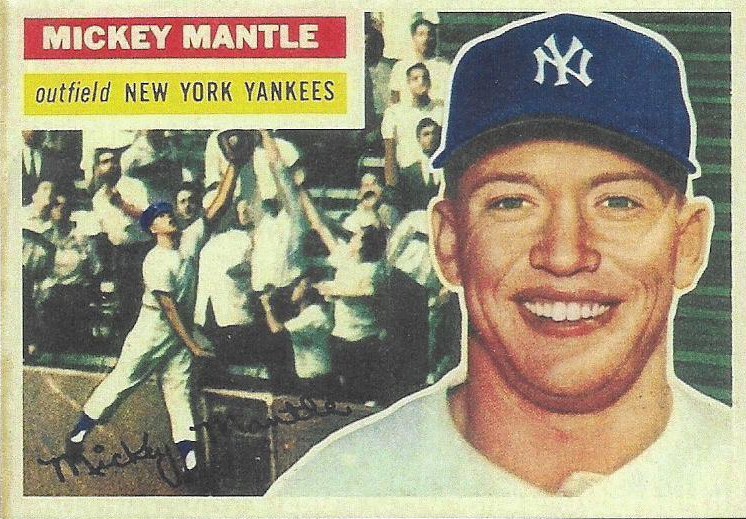 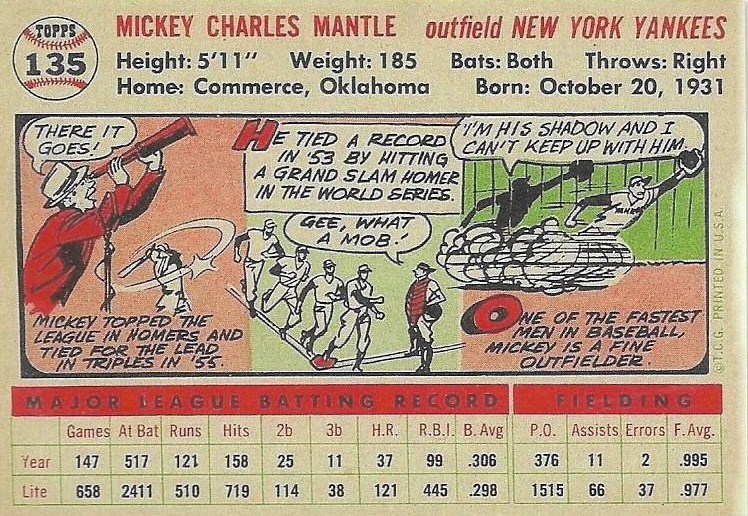 Oh, and this thing.
I don't know exactly what this is. It feels and looks like Max made it in his counterfeiting basement. It's not fooling anybody, but it's nice enough and as Max said in the note that came with the envelope: 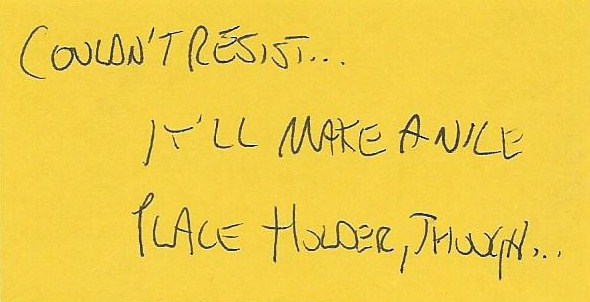 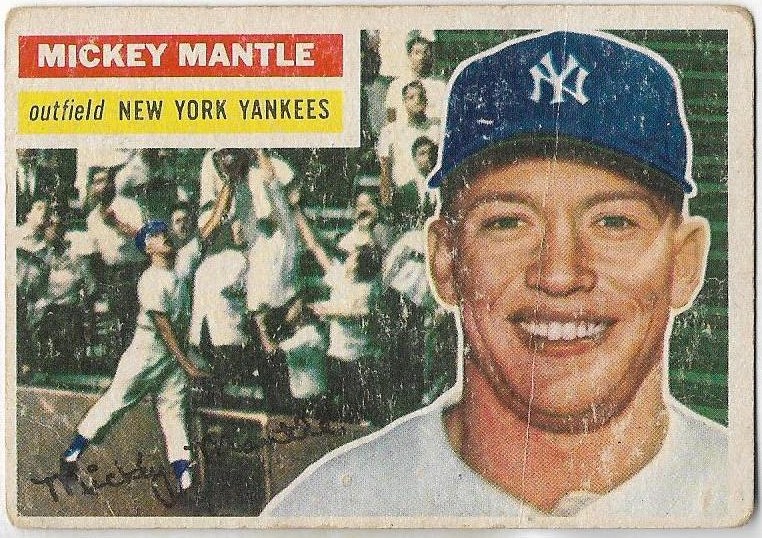 THREE TO GO.
As Dorothy once said, this ain't f'ing Kansas.
I am enjoying this tremendously.
Not only do I now own the MICKEY MANTLE card from the 1956 Topps set, but it arrived just when no one expected it to arrive -- hell, I ordered the thing and I never expected it to be anything other than the last card I needed, something that rotted on the want list for years after I had already accumulated the other 339 cards in the set.
But I just had to wipe off that smug look on Mantle's face. He doesn't get to be last and hold my set hostage.
Obviously, this card cost me more than any other single card that I have purchased in my life. But it didn't faze me ... like I said, the stars are aligned. It looks rather beat up, and it is, but in hand it looks much more impressive. You don't notice the crease that travels down the middle of his face like you do in the scan. And the scuff marks that the scanner picks up get lost in the crowd in person.
It's actually quite beautiful, with perfectly rounded corners, no major paper loss and everything intact. 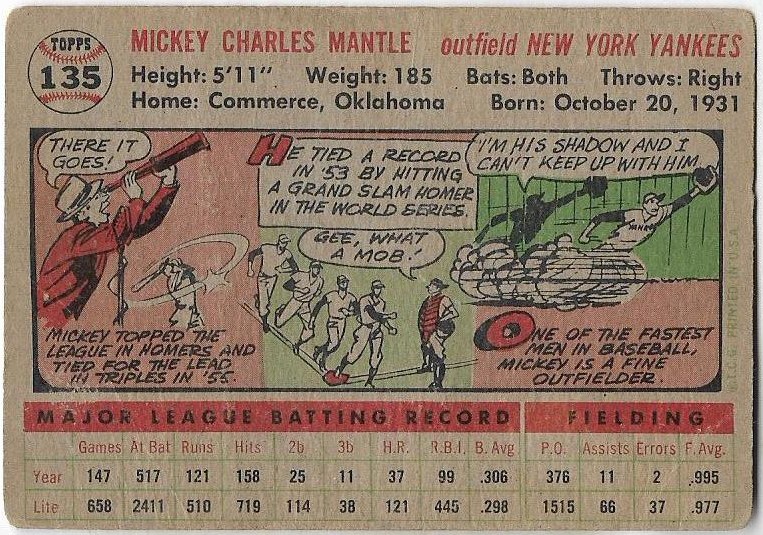 Robert from $30 A Week Habit gets the assist for my card purchase as he posted a link to the ebay sale when I showed off the Clemente '56 card I landed.
I took a look at the link and saw the card was in decent shape, especially for the price, which was way more reasonable than a lot of Mantles for sale from that year.
I filed that bit of knowledge away for a few days. And when the time was right, and the card was still there -- see ya, watchers! -- I snagged it.
As you can imagine, it feels great to own it. And it feels even better that there are now no cost-prohibitive cards left on my '56 want list.
Last to land are:
The Pirates team card
Monte Irvin
Luis Aparicio
The Pirates card is a toughie because Clemente's name is on it. The Aparicio card is a toughie because it's a rookie card and, especially in the card times in which we live, people are starting to attach weird prices to it.
However, in the recent past, I have held both the Irvin and Aparicio cards in my stack while standing at a dealer's table at a card show, only to remove them to obtain other cards.
I probably should've bought them, knowing what I now know. But I'm not worried. They will be mine.
I'm not sure what I'll write when those three cards are in my clutches and the set is complete (no, I'm not going for the two checklists). I've written so many posts about 1956 Topps, anything more would just feel like repeating myself, as I am now.
I'm a bit uncomfortable in this world. For a long time, I've asked myself over and over -- and others have asked me -- what are you going to do about the Mantle? How will you get the Mantle? How long will you have to save for the Mantle? I don't know, I'd tell myself and the others. I have no idea.
And now I own it.
I'm such a big shot.
Pretty damn nice living in Oz, tho.

Mike the History Teacher said…
And then there were three ...

Old Cards said…
Way to go on the Mantle! It is a "beautiful" card. I was one of those that asked you what you are going to do about the Mantle. According to your response, you did not seem concerned. Now I know why.
March 30, 2021 at 8:45 PM

Fuji said…
Congratulations! The light is shining bright at the end of the tunnel. I think a lot of us 56T fans are living vicariously through you.
March 30, 2021 at 10:28 PM

Billy Kingsley said…
Congratulations! It's nice to see such a lofty goal nearing completion, especially considering the hobby's theme for the past year or so has been "If I only had a brain".
March 30, 2021 at 10:41 PM

Mark Hoyle said…
Congrats Greg. Great accomplishment., beautiful set. I wish I had doubles of the Aparicio card. I grabbed one at a show a few yrs ago. Wasn’t cheap then
March 31, 2021 at 7:32 AM

Robert said…
Very glad I could help. Love seeing a set like this come together.

Matt said…
Sweet Mantle! Many of us are living vicariously through your pursuit, so we'll all be excited when you finally get this set complete!
March 31, 2021 at 10:15 AM

Bo said…
Kaline is a great card. Mantle is absolutely fantastic. But that Bridges card might just be the best of the three.

I have had your '56 wantlist in the back of my mind when checking out vintage eBay lots - I've gone back and checked a couple of times when i saw '56 stars to see if you needed them. Easy enough now to remember just three.
March 31, 2021 at 11:47 AM

jacobmrley said…
Wow, my Rocky seems so weak and ineffectual next to an actual 1956 Mantle (I let someone else do the 'reprint' job on the other one, feel free to use it as kindling).

As for the dusk cards, they have the lights on so I figured that would be good enough for you, but nooooOOOOOOoooo you have such standards for your arbitrary collecting rules.

Nick said…
Congrats, Greg! Seems like Mantle is everyone's last card with vintage set builds, so I'm glad you got him out of the way before the finish line. The last three must seem like a (relative) breeze with The Mick gone.
March 31, 2021 at 8:17 PM

Unknown said…
Congrats Great pickup. Mantle is the last one for me. He is getting the last laugh on my set holding it hostage for years now.
I did manage to snag a Carew and finish my 1967 set.
Brian
April 3, 2021 at 2:17 PM