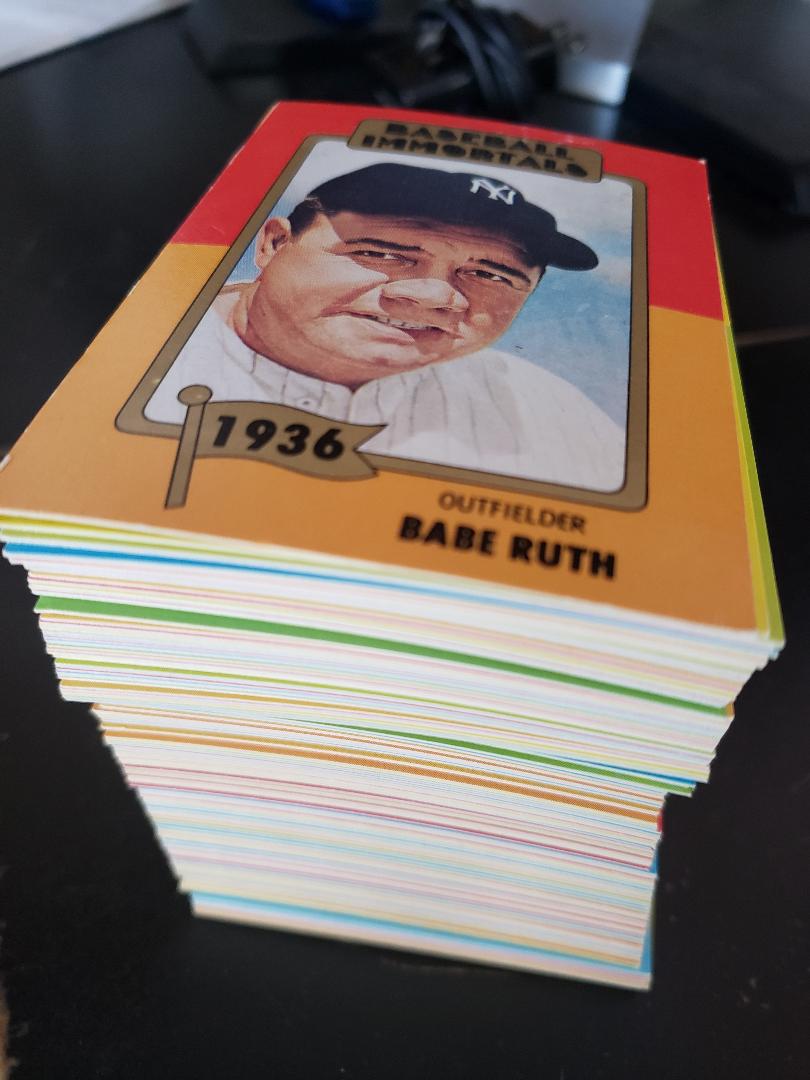 My favorite part of collecting cards doesn't have to do with collecting current players, rookie cards or prospecting.
Although I pay attention to and buy modern cards and also seek out cards from before I was collecting or even before I was born, none of those cards are why I'm doing this.
The best part of collecting for me -- where the warm fuzzies reside, what I'd save for myself after chucking the rest of my collection -- is any card that was released when I was a child or young teen.
I don't think I'm special in that way. A lot of collectors probably feel that way. But, unlike, say, the adult who grew up during the junk wax era, who can open pack after pack of 1990 Donruss and get that nostalgic rush without fear of packs ever disappearing, it's a little more difficult for me.
I can go to a discount store a couple of miles away in town and grab some 1988 Donruss packs (I think I can still do that, who knows with the hobby weirdness lately). But there's no way I can find packs of 1978 Topps down the street. Same goes for any other packs that I opened back then, cards I fished out of a cereal box or oddballs I ordered through a hobby publication.
What was once readily available isn't so much anymore.
Fortunately, I have completed just about every set that was issued from 1974 to 1984. There are a few stragglers, but they're affordable stragglers for the most part.
The Kellogg's and Hostess sets are trickier. And then there are those strange "collectors sets" that I saw only in black-and-white publications that arrived at the house four times a year in something called the TCMA Baseball Advertiser. 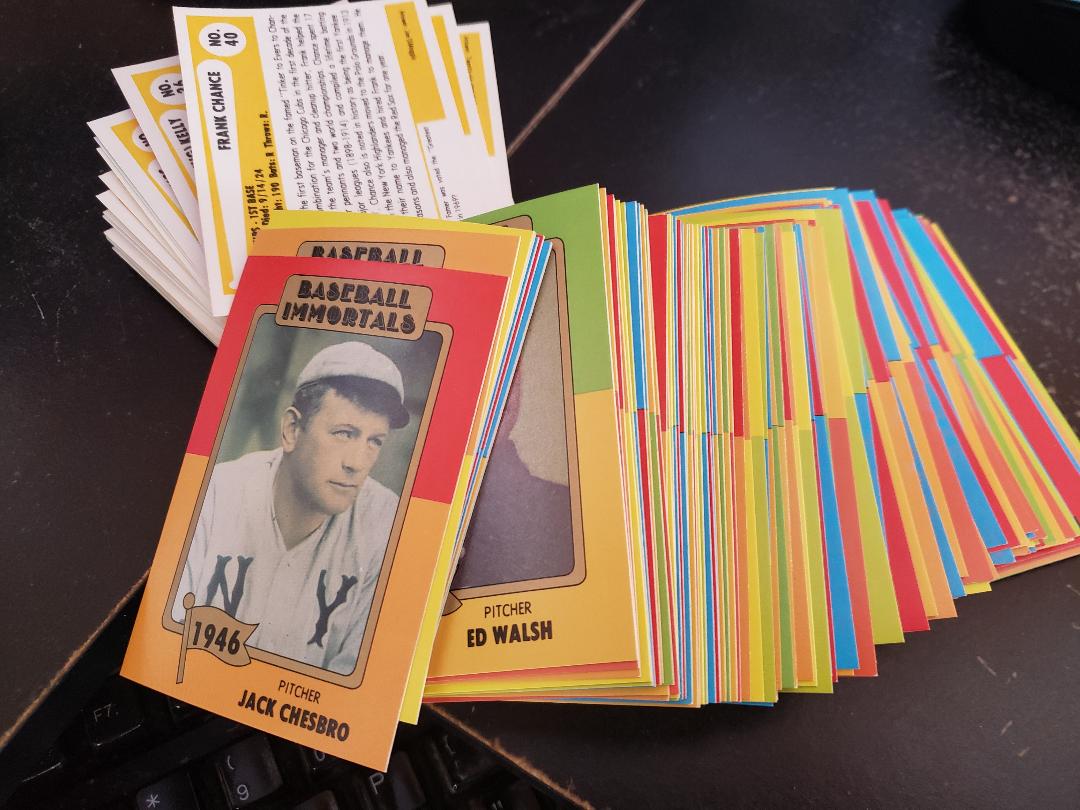 The king of those sets was the 1980 Baseball Immortals set.
I've always been unsure what to call these. I often call them the "SSPC Baseball Immortals set." But I don't know if I'm attributing it correctly. I believe the cards were originally issued by TCMA and Renata Galasso.
I suppose it doesn't matter, it keeps some of the mystery that this set held back when I first saw it when I was 14 or 15.
I fell in love immediately. The cards pictured legends of the past, I think it was years before I knew that the set contained nothing but Hall of Famers. The main appeal, for me, were the super colorful borders that paid tribute to the first card set I ever collected, my all-time favorite set, 1975 Topps.
I think collectors who weren't around at this time don't realize what a big deal printing in color was in that period. Most magazines featured a limited number of full-color pages. Newspapers were almost exclusively in black-and-white. Heck, it was still somewhat of a big-spender move to have a color TV in the 1970s.
People who grew up in the '80s and later tend to take a colorful world for granted and regard sets like '72 and '75 Topps as "gaudy." The Baseball Immortals set certainly wears that label, proudly I might add.
But color was a good way to attract buyers at the time. The more colorful the better. Every single picture in the Baseball Immortals set is in color. If that means some of the old-time 1800s ballplayers had to be colorized sketches, then so be it.
The set remains a popular set to this day. I've struggled to find it listed for something that was affordable and so I have been content, for years, to pick up card by card. Recently, I landed a decent chunk in a trade. And then, just a couple of weeks ago, I found cards 1 through 189 of the set selling for a price I could afford.
It's now mine.
That 14-year-old gawking at the set in the Baseball Advertiser is thrilled. 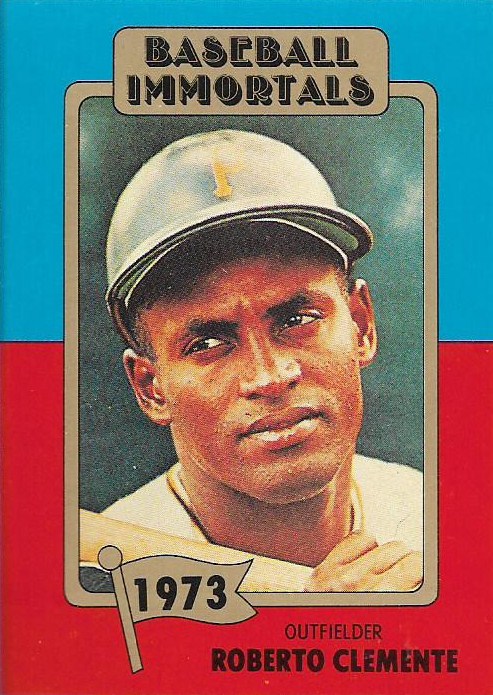 I was able to obtain all of the cards in the set except for the final 10, cards 190-199. I don't think those last 10 are any more elusive than the others so hopefully I'll be able to land those soon.
Meanwhile, I absolutely had to track the border colors much as I did with the 1975 Topps set.
There are 10 color combinations in this set. Here they are:
Red-orange
Orange-yellow
Yellow-green
Green-blue
Blue-red
Red-blue
Blue-orange
Orange-green
Green-orange
Orange-red
Some of those are the same color combos as in the '75 Topps set. But there aren't as many combos as in '75 ('75 also used purple and pink, for example).
The cards also are numbered in the order that I just listed. For example: 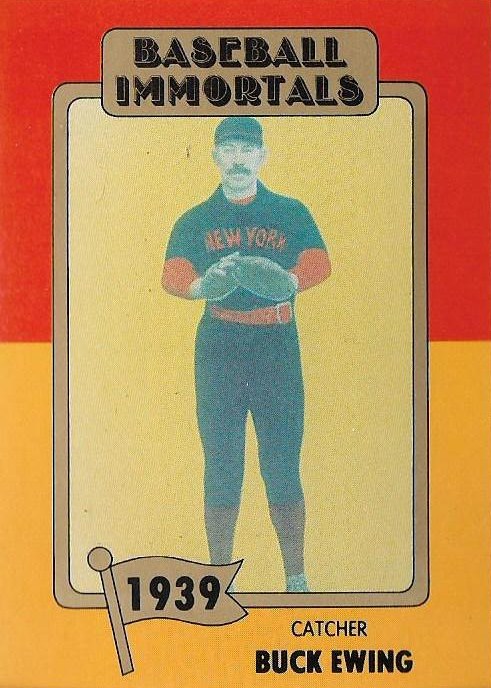 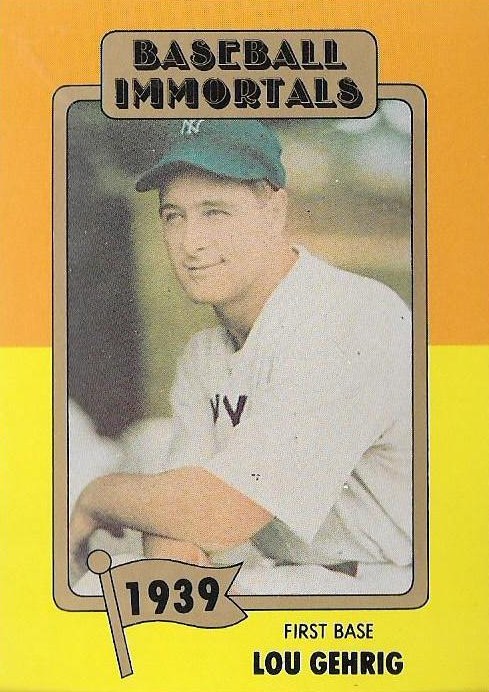 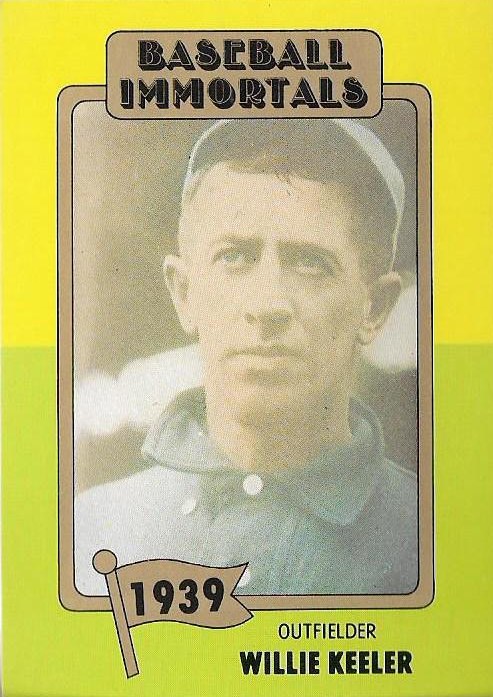 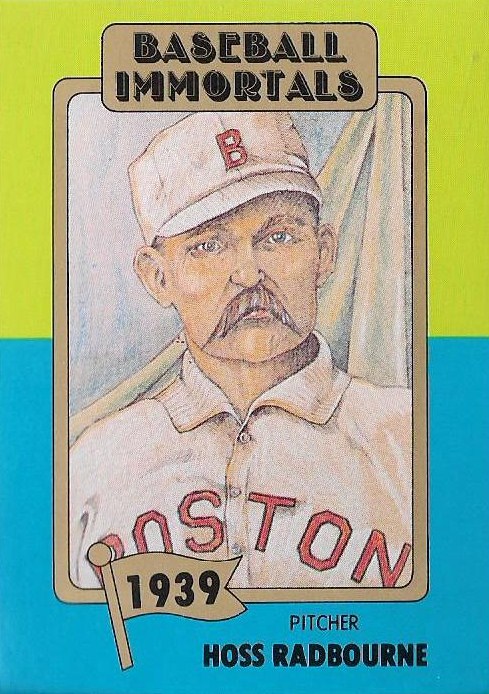 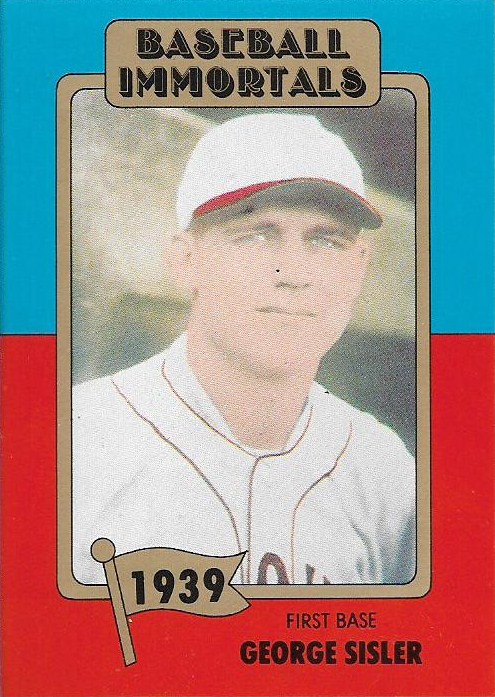 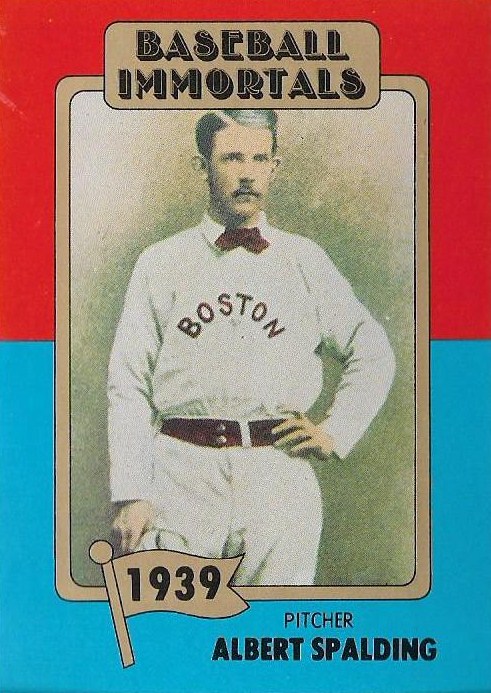 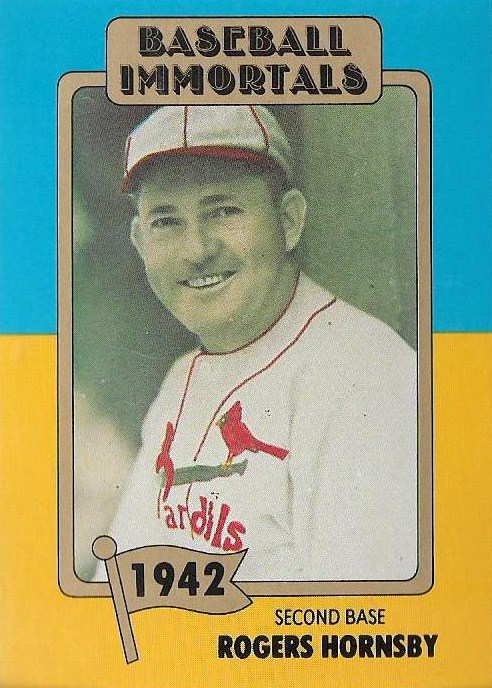 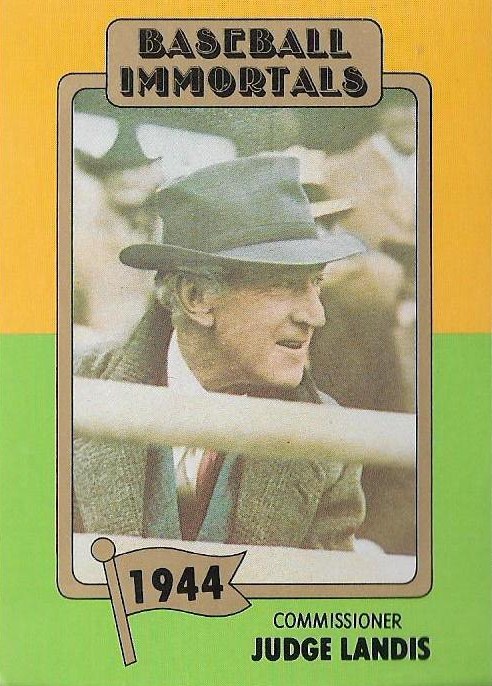 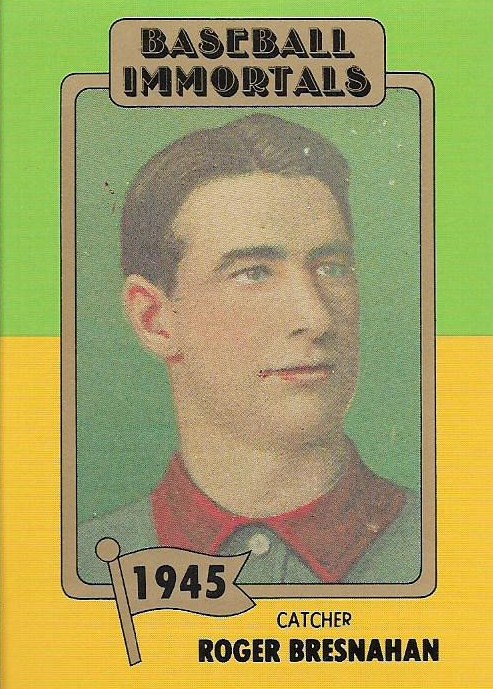 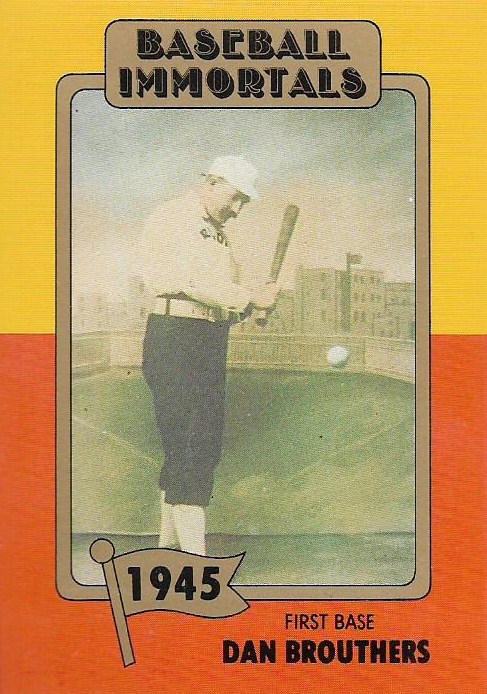 No. 30: Dan Brouthers (orange-red)
This color pattern continues throughout the whole first edition of the set, which is the first 173 cards, in other words everyone inducted into the Hall of Fame through 1980.
The remaining cards in the set were issued as periodic updates when new classes were inducted into the Hall of Fame. But the color combination didn't rotate as it did for the first 173. In this case, the color combination changed every four cards.
For example: 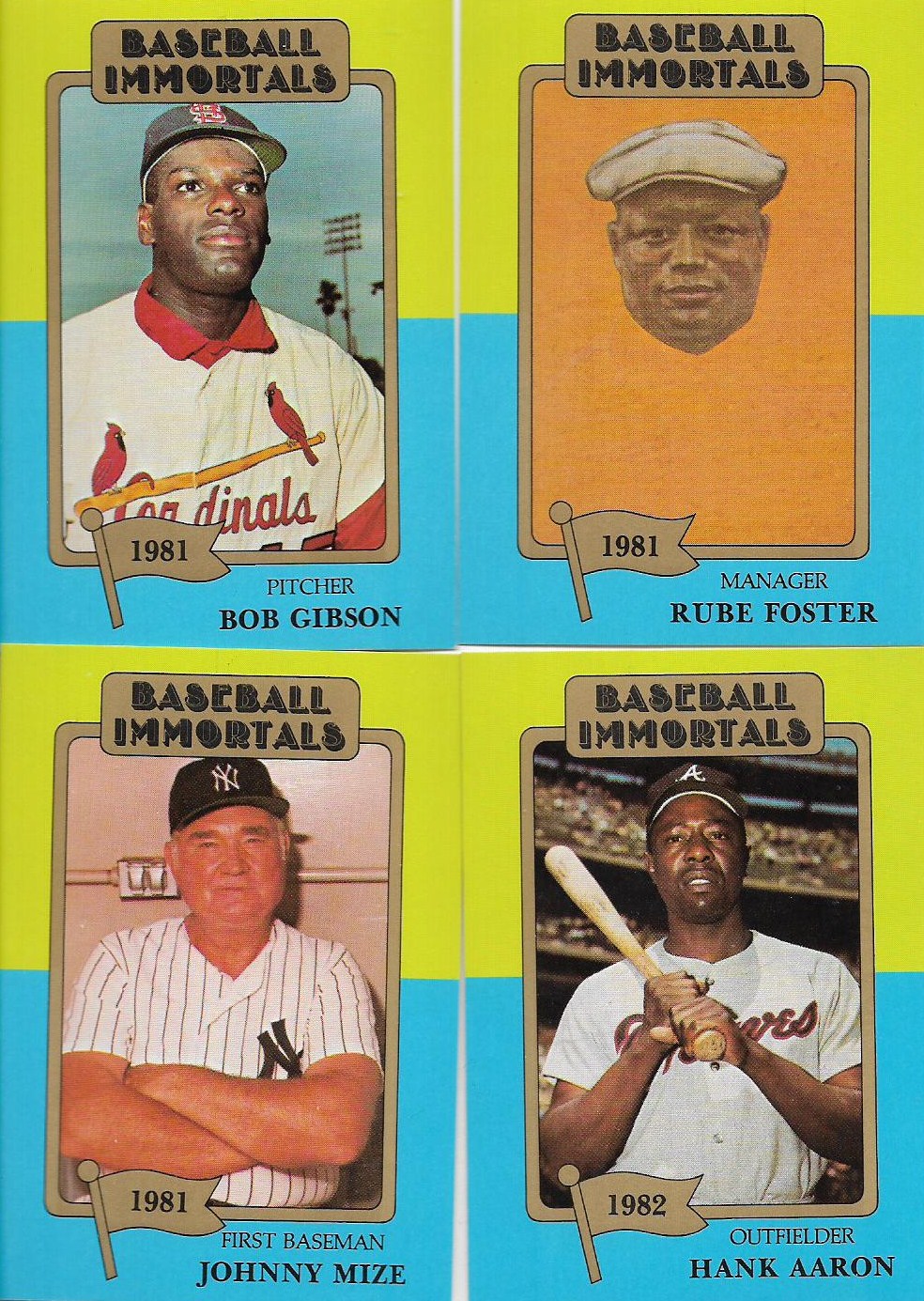 Cards No. 174-177 all are green-blue borders (including the alarming Rube Foster floating head card). 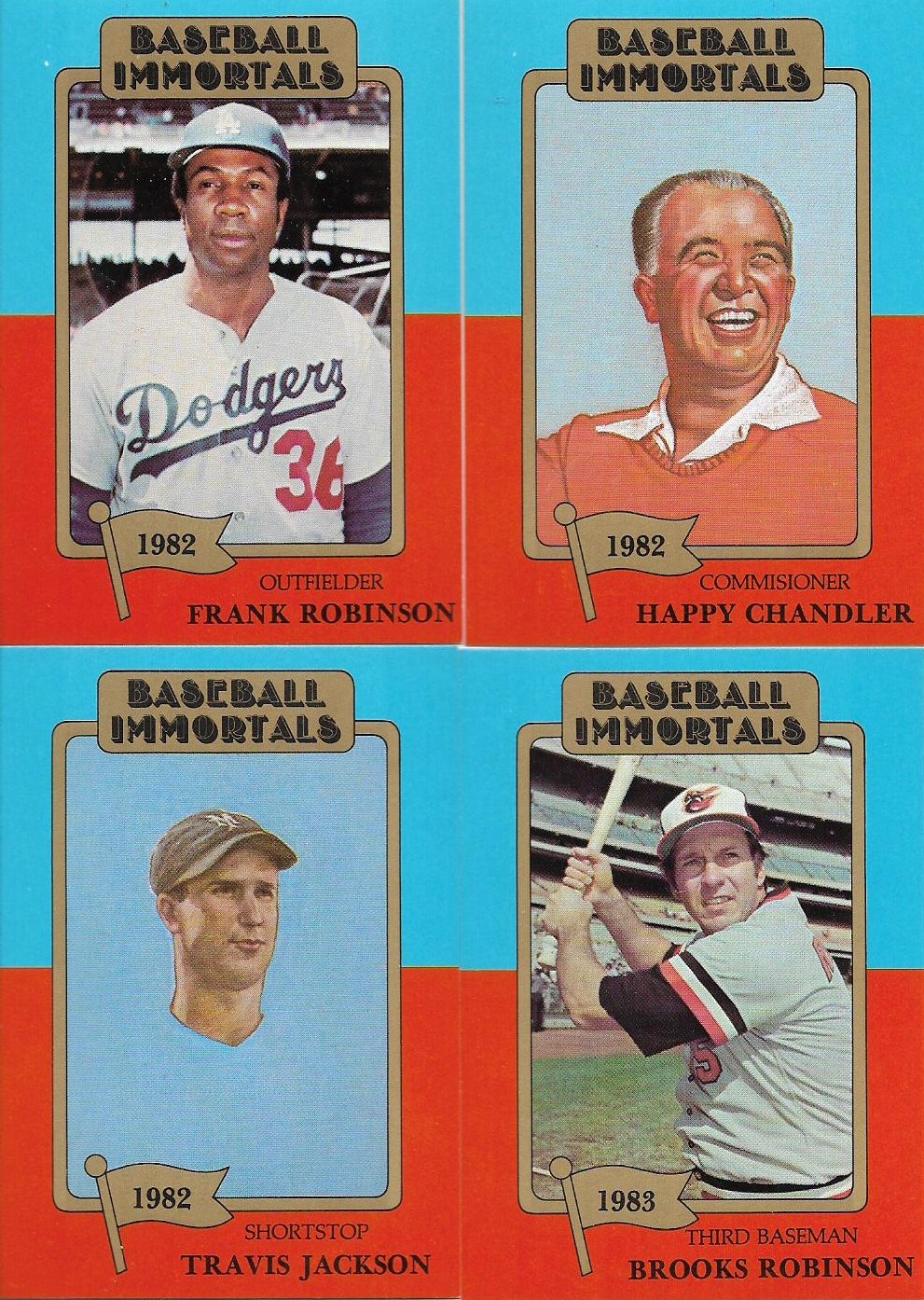 Cards 178-181 are all blue-red borders (another floating head!)
You can see that Baseball Immortals wasn't shy about using a photo of a player in a somewhat unfamiliar uniform, such as Johnny Mize as a Yankee and Frank Robinson as a Dodger. (Mize played several years for the Yankees but his best days were behind him).
I've probably gabbed far too much about the color combos in this set (especially for you color-blind readers). But I just get too excited about stuff like that.
The set is numbered in order of when a baseball figure was inducted into the Hall of Fame. That's why Babe Ruth is card No. 1 and members of that first class in 1936 follow soon afterward.
Having almost all of the cards has led to some revelations. 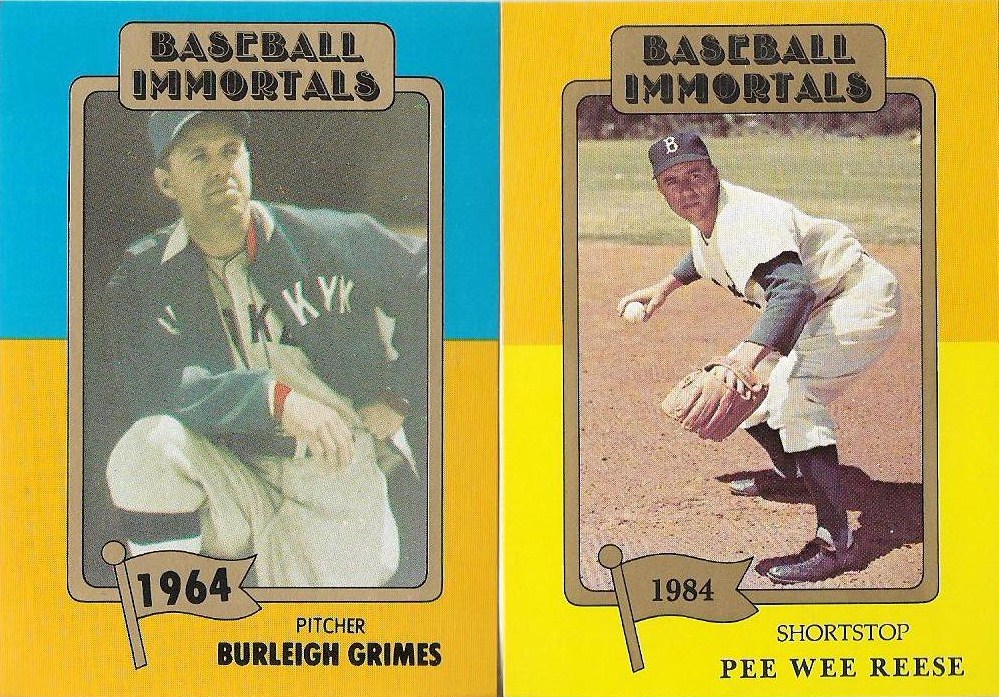 I need both of these cards for my Dodger binders. Part of the mystery of this set is I never had a handle on which cards showed players during their Dodger days.
The Pee Wee Reese card is from one of the set updates and you can see the difference in type with those cards. That continues to the back of the card, too.
Now that I've tracked down these cards, I now have a fair amount of dupes. So if anyone is collecting this set or is just looking for an obscure Hall of Famer for their Hall of Fame collection, it's possible I have an extra.
I cannot wait to put this set in a binder. It will probably join my other TCMA sets as they should all go in together and represent those exciting days when I leafed through the hobby advertiser and dreamed of owning these cards.
Now I have them. It took a little more effort than finding some cards from another collecting era. But at least I wasn't born in the mid-1950s. Finding those high numbers from your childhood must be brutal.

Phil Abramowitz said…
I remember mail ordering from Renata Galasso in the mid-to-late 80's and receiving 50 or so of these cards.
March 2, 2021 at 7:47 PM

Old Cards said…
Nice looking cards. Was not aware of this set. As much as you like 75 Topps, I can definitely see your attraction to this set. Yes. It is brutal collecting those high numbers. Much to my disappointment, I never see myself owning a Pete Rose rookie card from my favorite set, 63 Topps.
March 2, 2021 at 8:33 PM

P-town Tom said…
These were some of the first cards in my collection. My parents bought me one of those shrink-wrapped collector's binders at a retail store with pages and some cards included. Most of this set was in the binder and I remember reading the backs of the cards over and over. This set is easily in my Top 10 favorites of all-time.
March 2, 2021 at 8:44 PM

Johnnys Trading Spot said…
I love this set. There are 4 series:

hiflew said…
I remember getting some of the later series cards when I first got into collecting in 86-87. My very first LCS use to offer these grab bag packs for 50 cents each and usually there were 1-2 of this set included. I never appreciated the history of the game as a kid, so I never really tried to collect the set. I wish I could go back and smack myself for that.

Also, I absolutely must track down a copy of that Hoss Radbourne card because he looks just like Scruffy the Janitor from Futurama.
March 2, 2021 at 11:19 PM

Billy Kingsley said…
If you have a spare Dab Brouthers may I claim it please? He lived in my home town and there is a monument to him within walking distance of my house. I did do a post about it a while back.
March 2, 2021 at 11:58 PM

OhioTim said…
Thanks for information on this set. I picked up about 40 of these cards last summer at a flea market and did not know much about them. I am defintely going to be on the lookout for the rest of the cards.
March 3, 2021 at 5:42 PM

Nick said…
I've probably accumulated a near-complete set of these just picking them out of dime boxes and such throughout my collecting lifetime. The color portraits/photos and player selection have always appealed to me - it's just a well-made set all around...except the floating head cards. Those still freak me out.
March 3, 2021 at 8:43 PM

Matt said…
I really don't mind this set. I own a few of the cards myself. The gawky Colors against the photos looks unique
March 3, 2021 at 10:27 PM

acrackedbat said…
You done good! This set has always appealed to me but I can't complete them all. Hope you can nab the holdouts soon!
March 8, 2021 at 6:45 PM