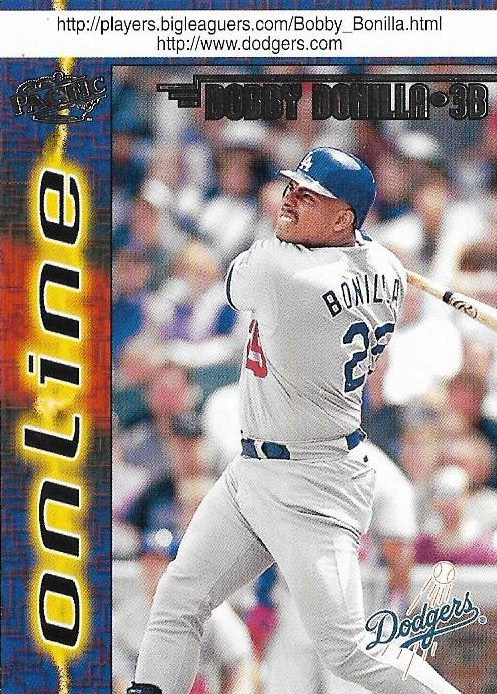 I never think that I own the largest Dodger card collection, or the 10th largest, or the 100th largest, or even the 1,000th largest.
I do know though that it is extensive and diverse. This is why I rarely enter team group breaks. With my inventory, I'd likely be adding only to my surplus. And that's just throwing money away.
So when I threw $100 at Nachos Grande's Breakers Club a couple of months ago, I needed to sit myself down for a talk and explain it:
"Self, yes, it's a lot of money, but he's opening a bunch of late '90s stuff and you always have holes where '90s cards go. When have you ever bought Pacific?
Also, he's opening 2021 product and you know you don't want to go to the card aisle and get mixed up in a knife fight on the off-chance you pull one Dodger card.
Finally, it's Nachos Grande! You know he's going to pull some fancy Dodger card, because he always does!"
OK, so I convinced myself to sign up ... and then I watched as Chris pulled a bunch of dupes for me.
But, wait ... wait ... it got better (this is called "build-up."). Sure there were doubles, even with '90s product, because here's a thing about cards from the late '90s and also the early aughts that they never tell you: those years are filled with products in which a certain portion of the team set is readily available and then the remainder is made up of a bunch of short-prints that you've never seen ever.
That's the deceptive part of team-collecting between 1995-2005. You think you need a lot of cards for the team set. But actually, you just need those 6 cards out of the 11-card base set that have all been short-printed.
Then there is stuff like this: 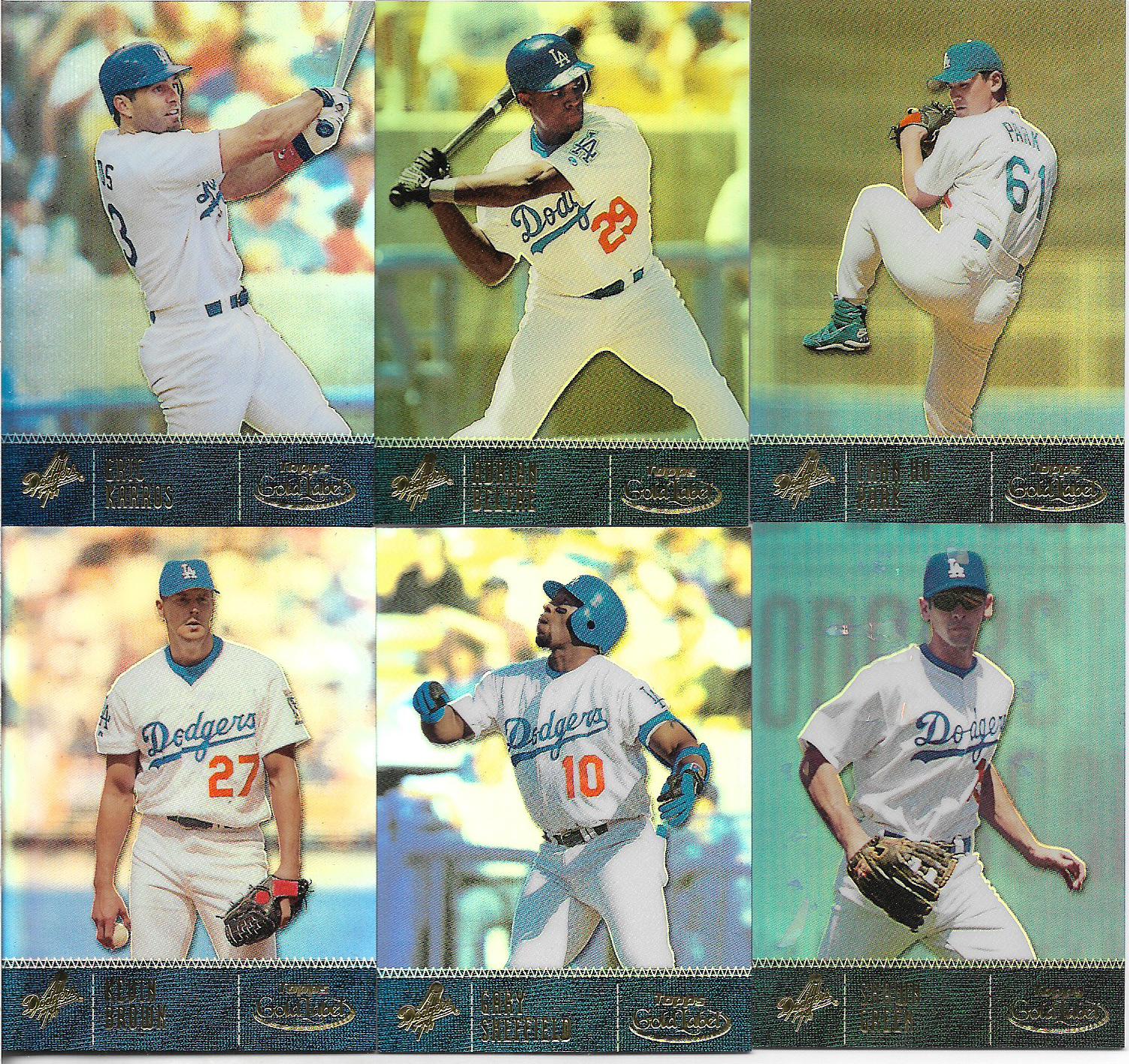 These are the 2001 Topps Gold Label cards that were pulled for me. I have all these cards.
But why? Didn't I have several '01 Gold Label cards on my want list?
Yup. I did. But the above cards are the more available Class 1 cards. My want list is filled with less-available Class 2 and Class 3 cards.
My goodness, how did anyone who collected in the '90s not throw out all their cards through pure frustration?
Chris did pull one Gold Label card I needed. 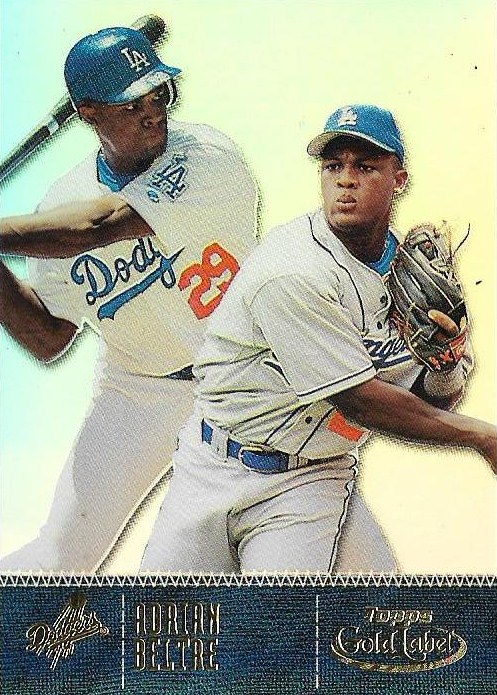 That, of course, is a Class 3 Gold Label card, which is why I needed it.
But that's the gamble of group breaks and I did know that, even with all those '90s holes, there would be a number of duplicates. I didn't fare well in the breaks for '95 Donruss and '97 Finest. All dupes.
Then there was some self-sabotaging on my part. Even though Chris was breaking a box of 2021 Topps, I went out and bought my own blaster of the stuff and pulled a whole stash of Dodgers. I just can't help throwing money at cards. But if I didn't, I wouldn't have gotten the short-print Mookie!
So, when I filtered out the 2021 Dodgers I bought for myself and the cards I already owned, I wound up with needing a total of 19 cards from the break, with a couple of key extras.
That comes to about $5 a card, which seems steep, but it turned out great. Also there are some other advantages to group breaks that no one talks about.
1. It catches your collection misfiles. 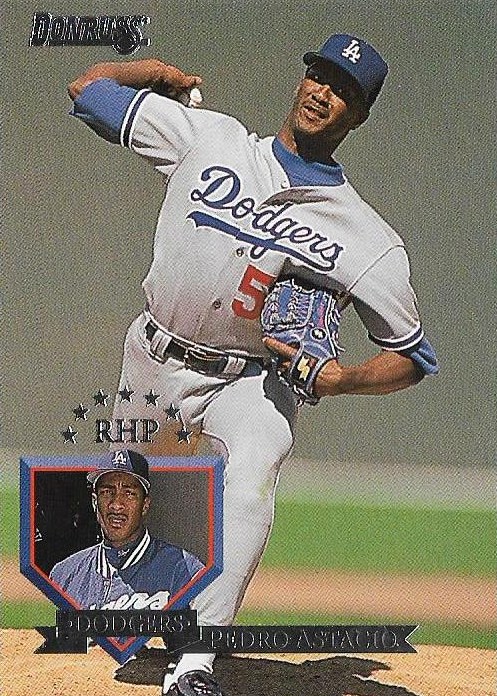 While checking the 1995 Donruss Dodgers in my collection against what was pulled, I realized I didn't have the Pedro Astacio in my binder. What the heck? I rooted through the giant box of dupes and, voila, pulled out a '95 Donruss Astacio.
2. It lights a fire under your butt 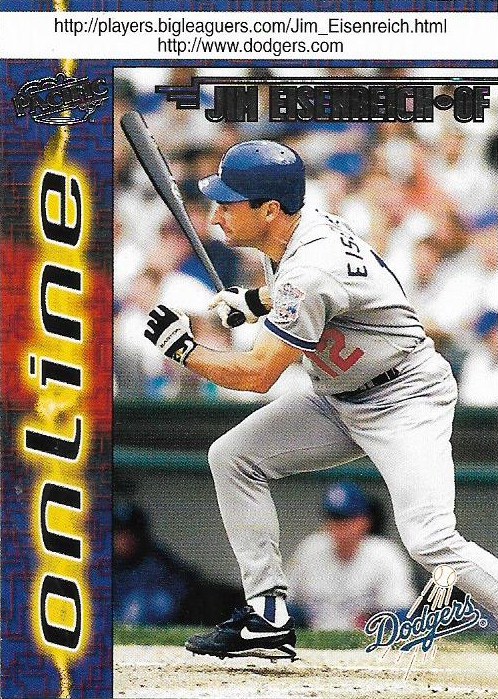 I watched the entire 1998 Pacific Online break knowing I needed just one Dodger from that set. I waited and waited and waited for Jim Eisenreich's name to be called. It never was.
So I promptly went on Sportlots and ordered the thing for 18 cents. Who knows how long that would've sat on my want list without that group break?
Other than that, I was able to land several Dodgers needs from some sets I barely pay attention to! 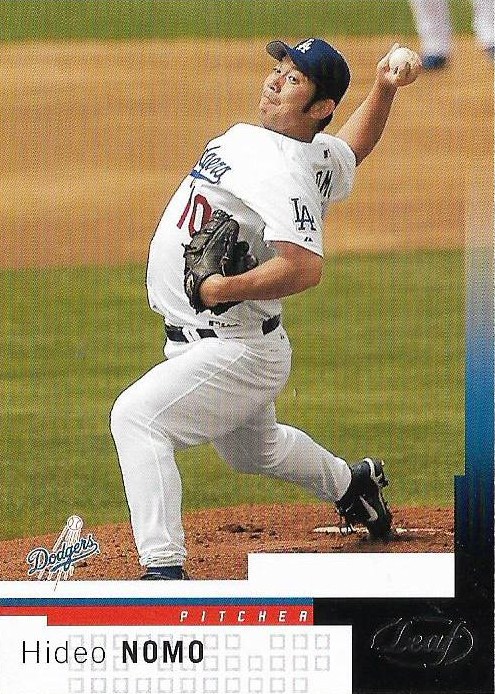 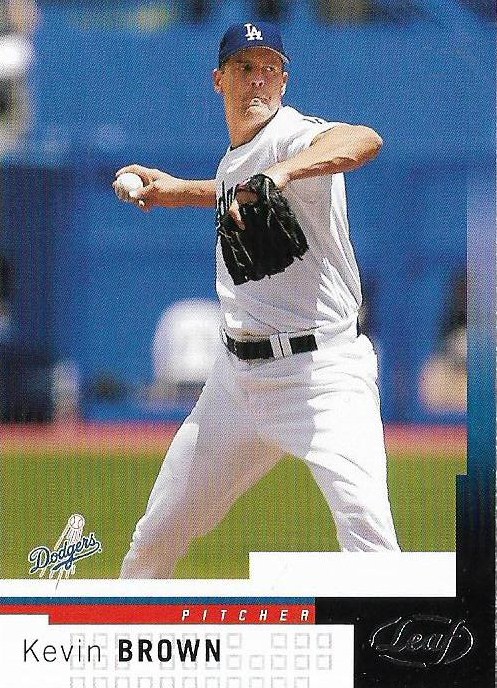 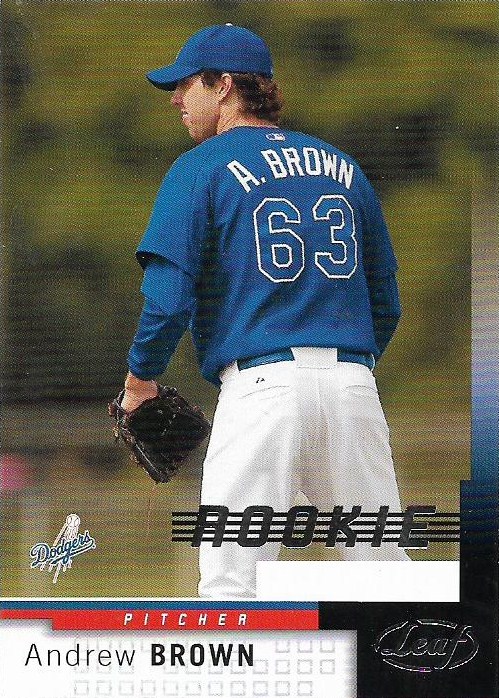 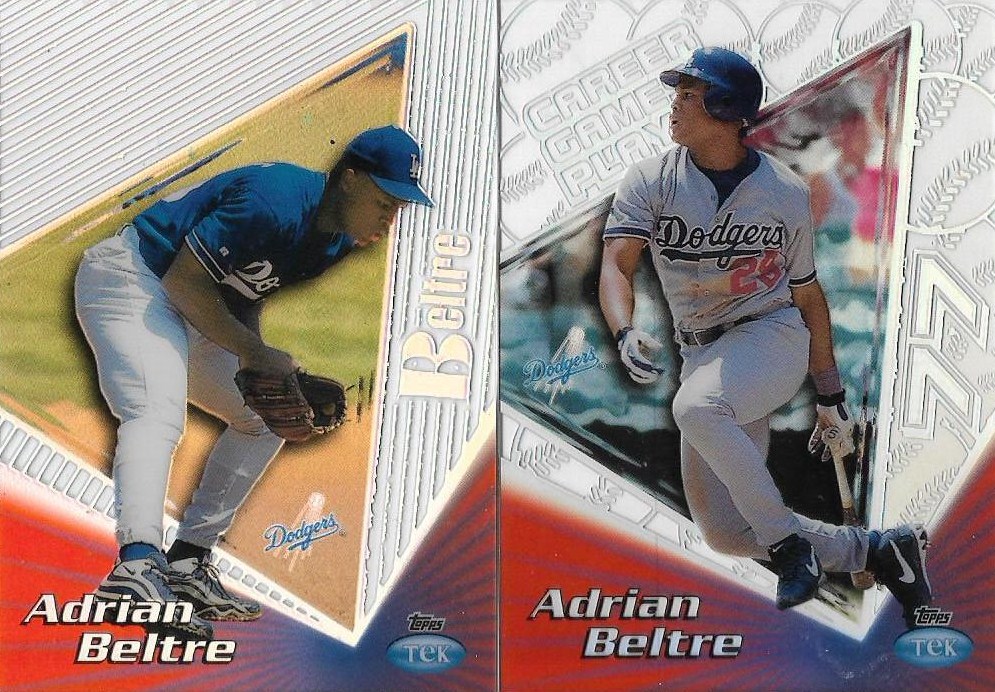 A couple more of the bazillion different parallels of Adrian Beltre in 1999 Topps Tek. I think I have four of them now? Only 65,541 to go.
Chris stressed how wild the prices were for a box of Tek. I don't fully understand the fascination with Tek. I think if I had to collect basically the same version of a card over and over and they were not even on cardboard (acetate is too flimsy), I probably would've given up collecting after the year was out. 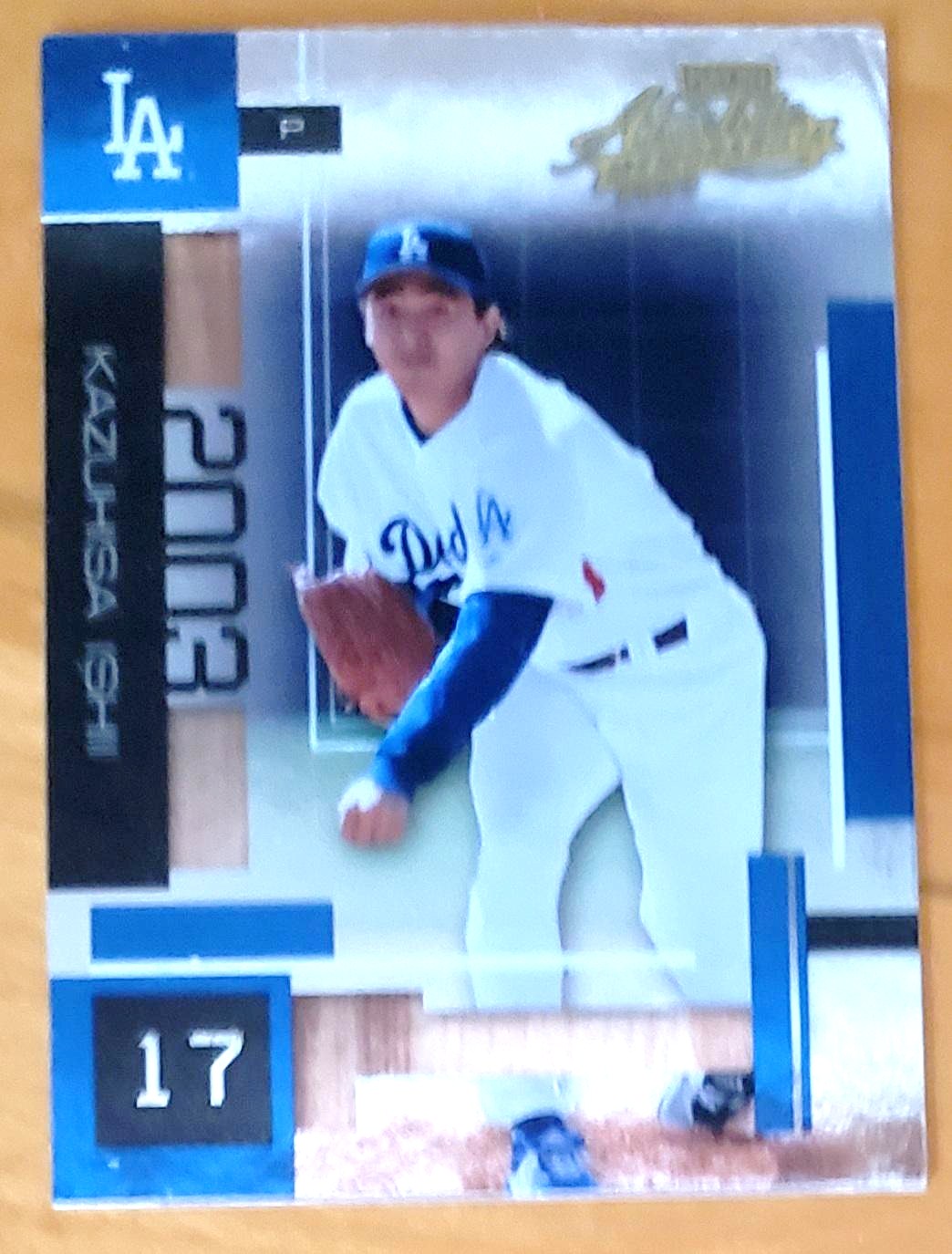 The Kaz Ishii card was the only base need that I didn't already own from 2003 Absolute Memorabilia. I took a picture of it because lots of Donruss/Playoff products around this time didn't anticipate scanners. And the picture came out blurry.
My second favorite card from the break came from this particular box though. 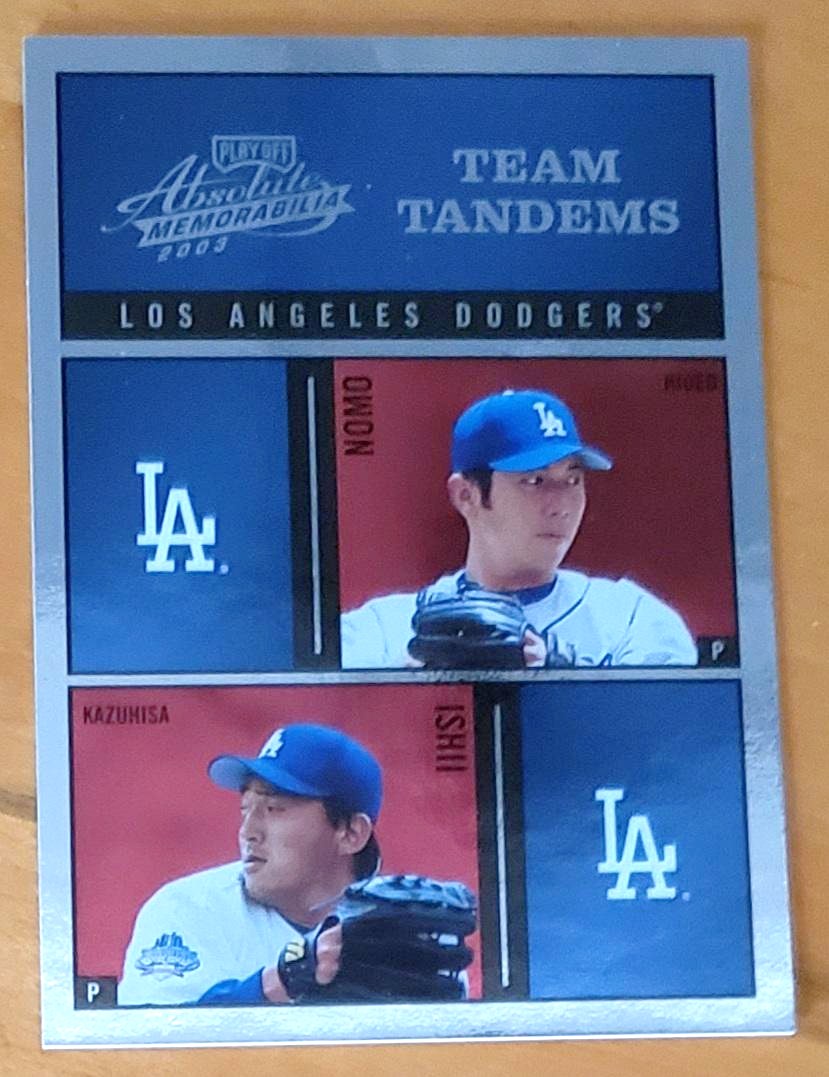 This is pretty. I like this card a lot and I had never seen it before.
I also believe it was the only Dodgers insert pulled in the entire break. This is very late '90s/early '00s for this to happen. Chris was pulling inserts of Braves, Astros and Yankees everywhere. Rangers, too, weirdly. And Barry Bonds. Ick. But the Dodgers are always shut out. Nobody wanted to put Kevin Brown on an insert card, I guess.. 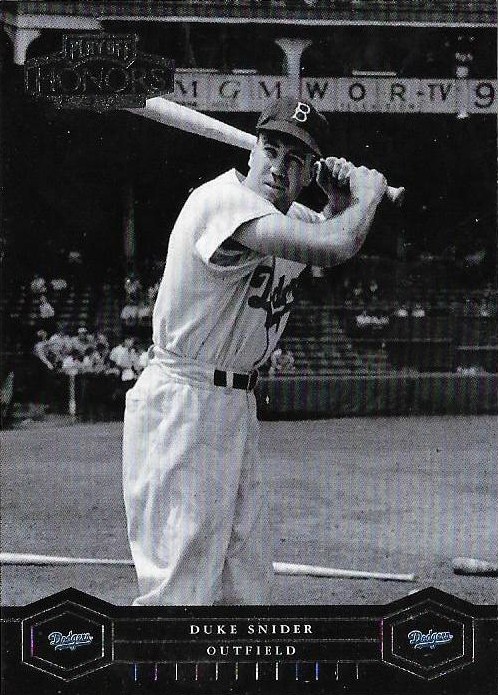 The 2004 Playoff Honors box yielded the only example of me landing one of the team short-prints with this super-excellent Duke Snider card.
I love, love, LOVE the WOR-TV 9 sign in the background. I know this was a long time before I was watching WOR Mets games in the late '70s but it sure does bring back memories. 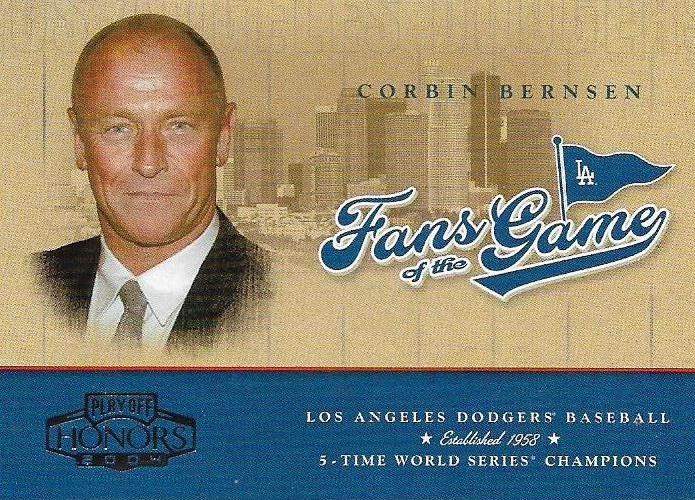 OK, I take it back, there was one other insert. Corbin Bernsen! Come on, Dorn, get in front of the ball!
Playoff was doing that celebrities-in-baseball-sets thing before it was fashionable and there are a bunch of Dodgers fans in this set, naturally. 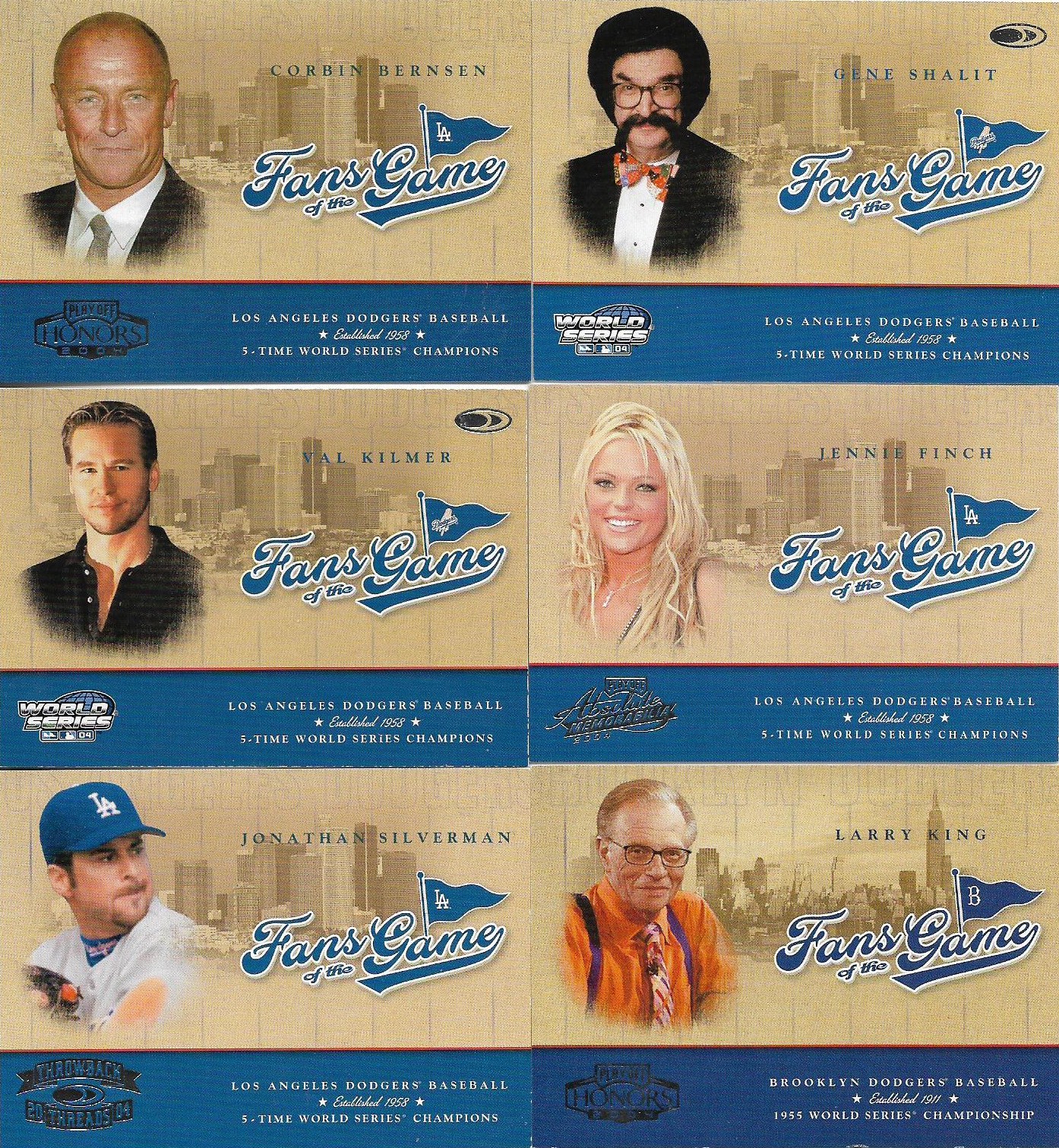 I think I just need the Stan Lee to finish off the Dodgers and I'm sure I'll be battling comic nerds for that card for awhile. 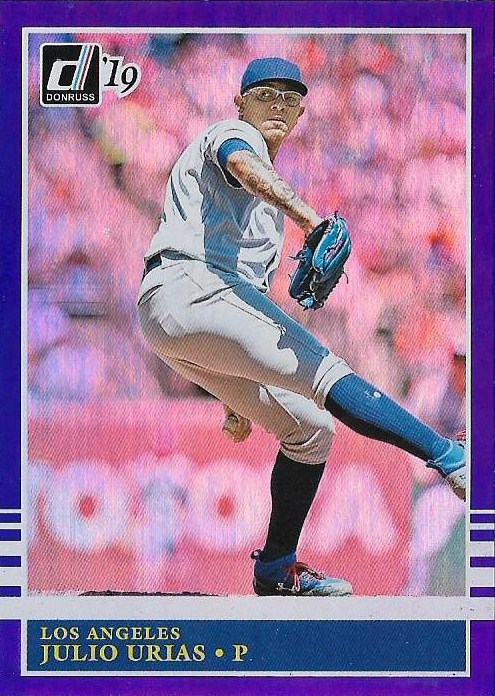 Chris busted a bunch of random packs that went into members' stacks for free. The best item for me was this purple shiny from 2019 Panini Donruss.
Another one of the boxes that Chris busted was 2018 Topps Gallery. I'm not a fan of New Gallery and the reboot is true to the original in that it mimics many of those turn-of-the-century sets where there are a whole bunch of SPs in the base set.
The rookies in this set are plentiful but a lot of the veterans and legends are of the short-printed variety. So, I landed a bunch of rookies that I already owned, which was good in one way: 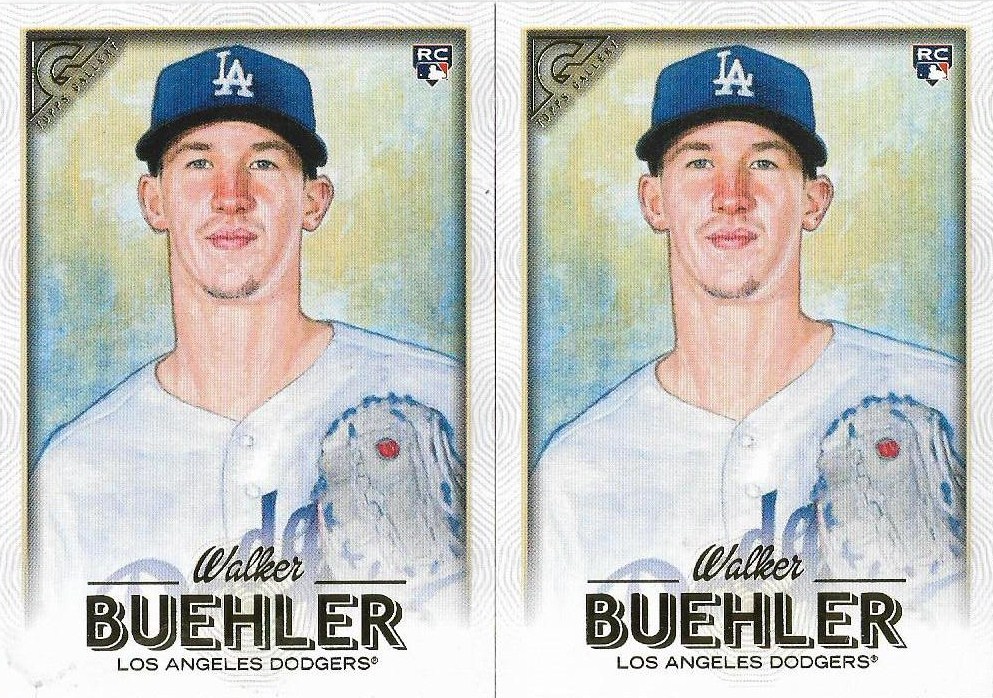 I can add these to the ever-growing Buehler rookie-card collection. (I then looked online and corralled most of the SPs).
So ...
By now, those of you who are still with me and read that my stash boiled down to $5 per card might be stuck on that figure. As you've seen the cards, you could be going "5 dollars, 5 dollars, I don't see 5 dollars-a-card for this."
I getcha. But keep in mind, I already showed the 2021 Dodgers that I received in this break on an earlier post.
And, also, I reserved the best for last for faithful readers who read all the way to the damn end of posts. 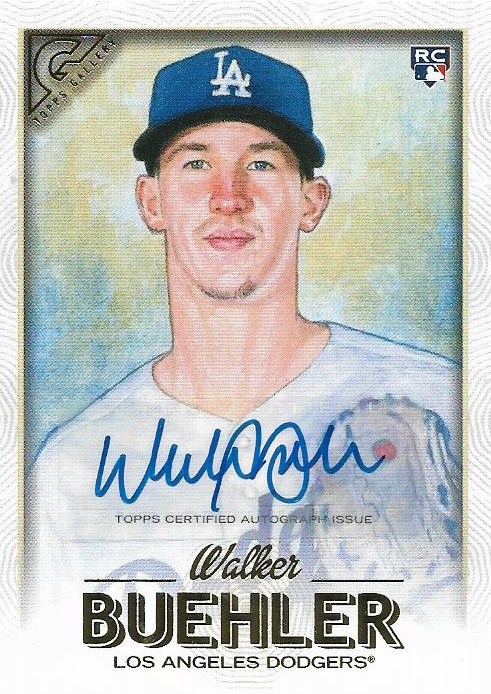 I told you Nachos Grande always finds cool Dodger cards for me.
This card may have well paid for the entire cost of the break -- if I were to sell it, which I am not. It's certainly going for more than 5 bucks.
This is not my first Walker Buehler autographed card. But it's been a long time since I've gotten one, as people have figured out who Buehler is since those first early autographs.
So, despite the duplicates -- which are always expected in group breaks -- this was very successful for me and certainly worth the cost.
I've signed up for the next Breakers Club and there's lots of 2021 product in this next one so even better chances of landing mostly cards I need.
And always the chance of getting something super-fancy.

The Diamond King said…
Always the gamble, right? Since I am not a team collector, group breaks don't hold much appeal for me. But I am glad you got some sweet stuff! Obviously, the Beuhler auto is awesome, but I love those Topps Gold, and the Beltre is sweet!
March 18, 2021 at 7:16 PM

Nick Vossbrink said…
I'm still in the place where I need a bunch of base for these sets but I still find myself side-eyeing the cost. I suspect I ended up overpaying but part of the fun of base-centered breaks like this getting the big package of Giants cards to dig through.
March 18, 2021 at 8:07 PM

Johnnys Trading Spot said…
With that Playoff Fans of the Game set, don't forget about the Dean Cain error. It says Dodger fan, but he's in NYY uniform. But is says it is a Dodgers card.
March 18, 2021 at 9:03 PM

Fuji said…
If I was ever going to join another group break... it'd most likely be one of NG's Breaker Club ones. I like the variety of the boxes he chooses. Congratulations on adding a lot of new cards to your Dodgers collection... especially the Buehler autograph.
March 18, 2021 at 11:26 PM

Nachos Grande said…
Glad you were able to get something great out of the break! Always appreciate the kind words - I certainly aim to make my group breaks "worth the money" to all participants (with the understanding that group breaks, like pack buying, are gambles). I was hoping that auto would be new to you (and that you'd be excited by it - Walker may be the new Kershaw in terms of Dodger autos that I pull for you).