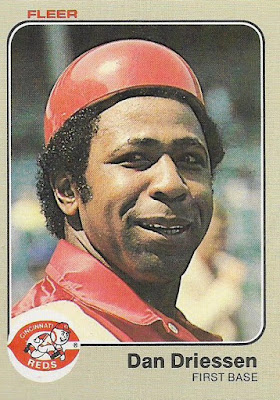 I've written quite a bit about 1989 Fleer lately, but it's about the least enjoyable Fleer set from the 1980s for me.

I just don't have a connection to it like other '80s Fleer sets. When I think about that, I believe the reason is because life was pretty good in 1989. Going to class was behind me, I was college educated. Lots of free time. A girl to wine and dine and the world to explore. I still collected cards, but they weren't getting me through anything.

Now, early 1980s Fleer? Those were some uncertain times. Thank goodness Fleer was around then.

During high school, I was a good student but not popular. I didn't feel like being smart all the time so I settled in with the kids that were like me, not quite popular, not quite eggheads, more smart-asses than anything else. Good boys who got into trouble periodically.

I didn't really belong to anything. No sports teams for the most part. No clubs. I didn't join classmates every Friday night after the football game and head up to the overlook to get wasted. I didn't ditch the game and head to the basement to smoke weed with the burnouts either. I just did my own thing and tried to cope with being a teenager as best I could. I had two things to assist me: music and cards.

Music gets all of the credit. It's a teen-aged cliche. But cards? Cards hardly get any credit for getting kids through high school, even though they certainly helped me.

That's why when I received some 1983 Fleer off my want list both from reader Chris and from J.C. of The Fleer Sticker Project, my heart skipped a happy beat upon viewing them. These were my boys, the ones that helped me through. The ones -- if you take the time to view them and appreciate them -- that have as much promise as your average confused high school student.

When I pulled the first few cards out of the package from the Fleer Sticker Project, I was hit with the memories of the 1982 World Series: 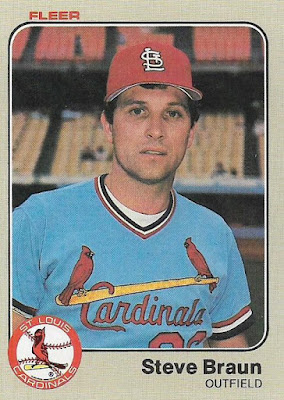 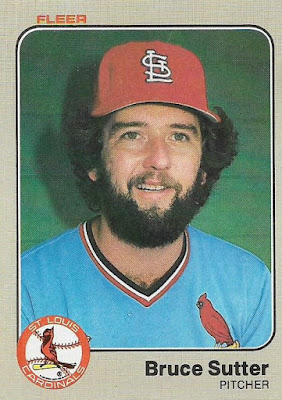 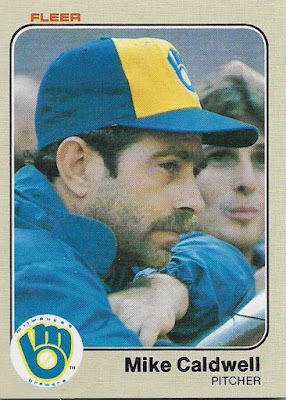 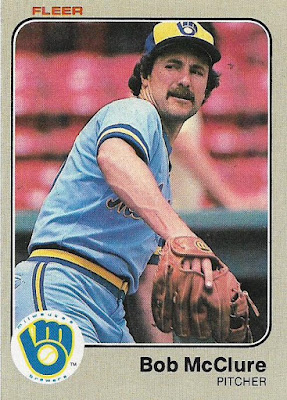 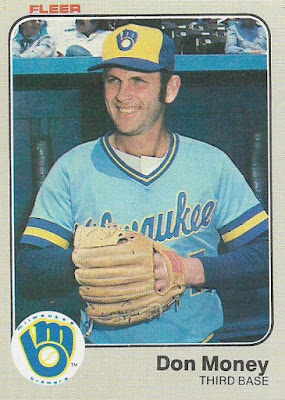 This is the World Series from my senior year in high school. I'd been a senior about a month so the confidence that I finally found in the later part of my senior year wasn't there yet. I would immerse myself in baseball to cope with those high school hallways. The World Series was HUGE then. Much bigger than it is now and it will never be that big in my mind again.

I even created a scrapbook of the entire 1982 season, culminating in the Cardinals' victory in the World Series. Wish I still had that. 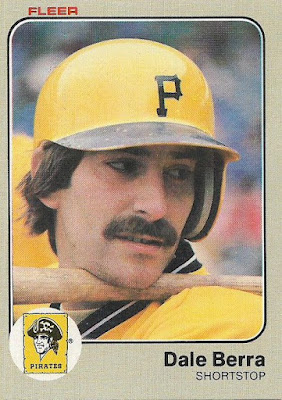 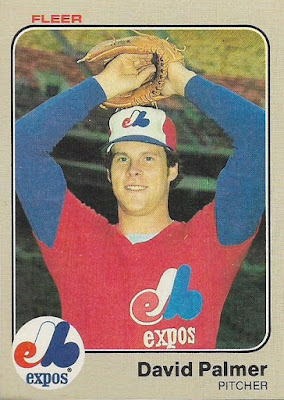 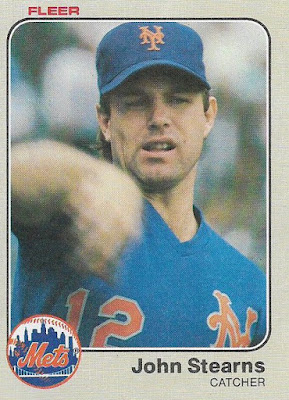 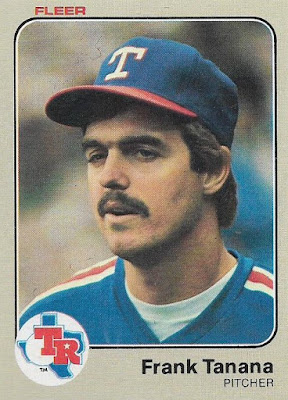 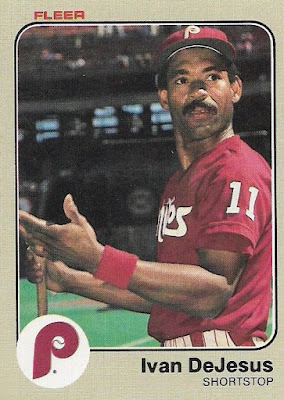 I was still a Topps guy when I was buying packs of Fleer cards. Topps' cards -- if you're going to equate it with high school stereotypes -- was the intelligent jock and class president with a cheerleader on each arm. It was definitely not like me. But I couldn't help but like and admire Topps, even though Fleer was much more my style. Look at the above cards. So many questions. What is going on? What is the photographer doing? What is the player doing?

That's Fleer. That's a parent talking to his teenage kid. What are you doing? What is that? Use your head! Come on, Fleer, you can do better than that! 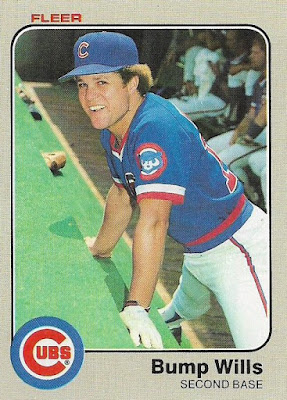 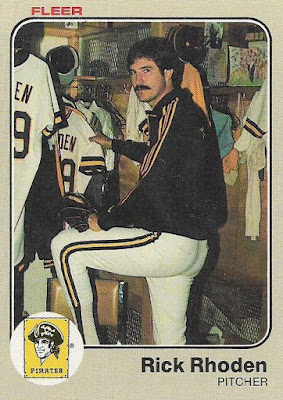 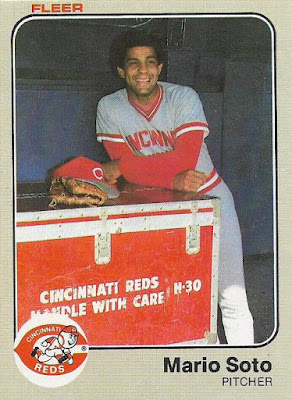 Fleer gave you moments that you just didn't see on any other card. Doesn't that sound like your average teenage outcast? Fleer didn't do what you expected or wanted it to do, but, sometimes, it turned out pretty good. Sometimes it turned into something memorable, something you might tell your friends. Did you see what that no-good, teenage son of mine did?? That was pretty good!

Mostly, when I was in high school, I would wait until the weekend to walk to the drug store to buy some cards with money I earned on my paper route. I'd stare at those cards all weekend. Then when it was time to go to school, I'd deal with the hassle of the day, and then I'd come home -- and if I was lucky, I'd have some time to flip on the record player and look through my cards. All of the cards -- whether Topps, Donruss or Fleer -- got me through. But there was only one card set that knew exactly what I was going through.

That would be Fleer. 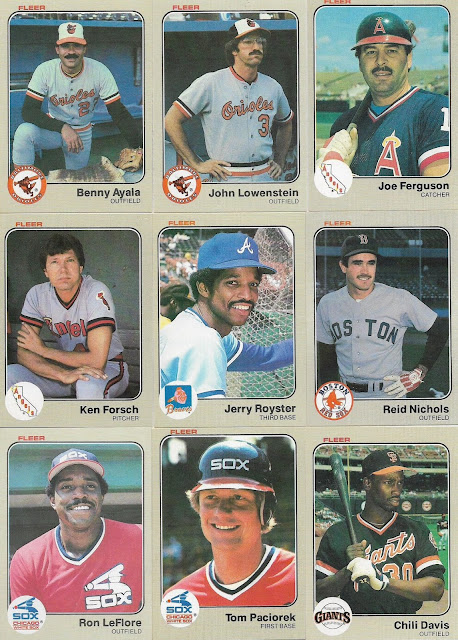 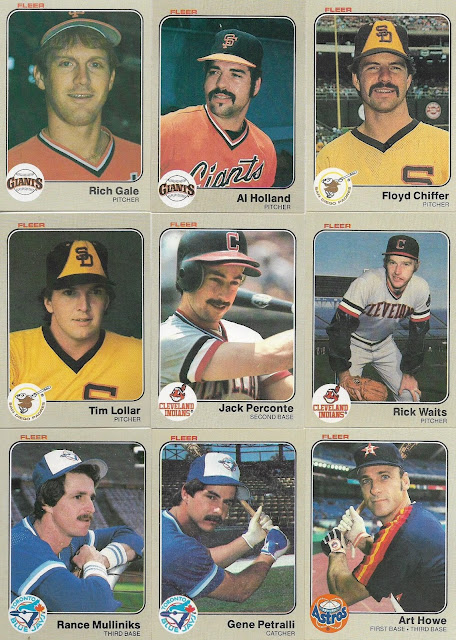 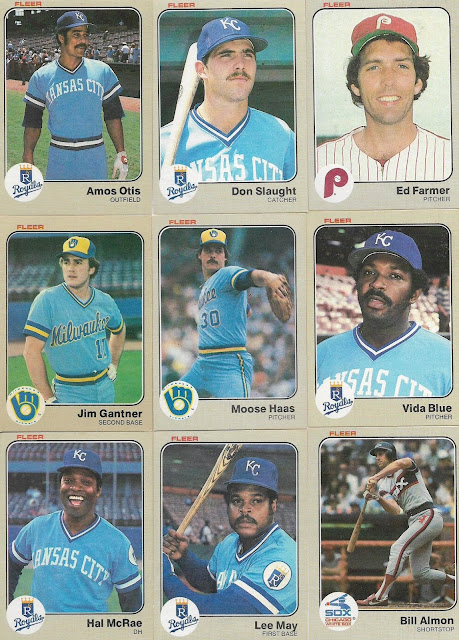 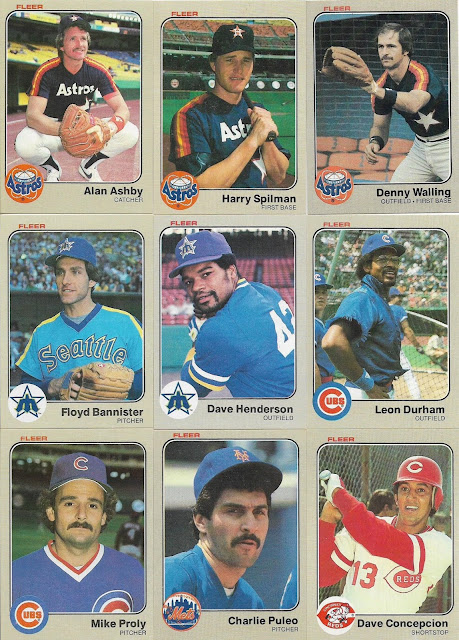 All of these players are familiar, every single one. Because I soaked up every bit of baseball I could get in high school.

Now, when I look at cards and players from this time, I think of collecting in high school and everything that meant. There's also a bit of nostalgia involved. 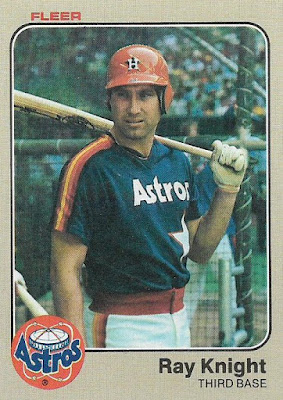 For example, I can't remember the last time I saw an orange helmet that wasn't in the NFL.

But mostly, my quest to complete this set -- and the other early 1980s Fleer sets -- is an attempt to fulfill those hopes and dreams in high school when just about every hope and dream I had was a million miles away, like it is for many high school kids.

Of course that means I really need to get that 1982 Fleer want list posted. Sophomore year was a bitch.

The Snorting Bull said…
This was my first set I collected as a kid, lived in Gettysburg, PA at the time. My father stopped in a corner store to buy a newspaper and a coffee, picked up two packs of 1983 Fleer too. My first card was a Jim Smith, who played shortstop for the Pirates. I still take this set out a few times a year and flip through the cards. Great post, I enjoy seeing these cards!!!
November 13, 2018 at 8:20 PM

acrackedbat said…
i lament the lack of memories associated with cardboard as a young person. maybe one day i'll share about my high school experience but those days were difficult ones. cards or collecting anything, would likely have made high school bearable. i did have music. thank God for that. i'm always a little envious of those (you and most of your readers) that have this connection to baseball cards. it's a good envy though.
November 13, 2018 at 8:35 PM

Commishbob said…
I loved that set. And I'm happy to see you do as well. Pic, team logo, player name take center stage. All I have left are the Orioles and a few stars/rookies. All the rest went to the dumpster long ago. I do have an unopened box stashed away for grins, though. One of these rainy days Ill take it on.
November 13, 2018 at 9:01 PM

David said…
I enjoy the introspective posts that are about more than baseball cards; they are about the author.
November 13, 2018 at 9:26 PM

When I look through my collection there are a lot of cards, just like there are a lot of songs, that take me back to another moment in my life. That's probably why I enjoy 70s and 80s cards so much more than anything from today.
November 13, 2018 at 10:54 PM

Anonymous said…
A friend of mine made the 1983 Fleer set the first time in 1990 when he was a Freshman in High School. Fast Forward to this year he is rebuilding it again all he needs is the Tom Brookens large brown box back card times 2 to complete it if you have 2 extra of them he's be grateful just send them to the blogger who knows resistance is Futile
November 14, 2018 at 2:12 AM

Fuji said…
This set is very special to me, because it's one of my earliest memories of saving up my own money and buying packs. When I first returned to the hobby about ten years ago, there were two major projects on my todo list. One was to build a 1981 Fleer baseball set (1st set my parents ever bought me) from packs. The other was a 1983 Fleer set. Bought the boxes. Built the 1981 set. Still have two 1983 wax boxes and two cello boxes unopened, because I ended up buying a complete set for $25 on a road trip down to San Diego.
November 14, 2018 at 12:03 PM

Nick said…
I love the photos in '83 Fleer, but the design is probably one of my least favorites in their run. That Mario Soto in particular has always spoken to me -- he was indeed a "Handle with Care" kind of player from what I know about him.

I'll have to write a post about my high-school collecting days sometime. It was a weird, confusing, kinda lonely (since I was the only one still collecting cards) time for me -- but still fun, of course.
November 14, 2018 at 1:08 PM

Doc Samson said…
Fantastic post, Mr. Owl. 1983 Fleer brings back such memories. I love colored borders, team logos and unusual photos -- 1983 Fleer had it all! It's funny how your post reminded me of another Fleer set twenty years after this one: the 2003 Fleer set that used the 1963 Fleer design. I just got my hands on a 2003 Fleer complete set. Oh boy, you love retro baseball cards, this set is a must-have.
November 14, 2018 at 2:21 PM