A discount box full of stuff I'd never buy 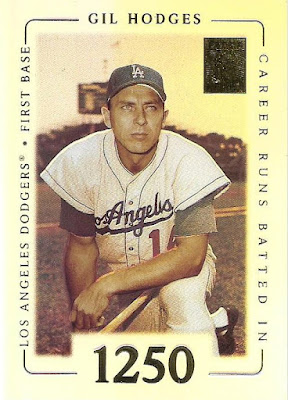 A couple of weeks ago I received a package from Cardboard Catastrophes that contained stuff that I would never buy.

This doesn't mean I didn't want what Jeff sent. It's just that I was amazed that virtually the entire package contained cards that either I have no access to, would never end up on a shopping list, or are from sets I avoid like the plague.

The card up top, a 2002 Topps Tribute item, is from a set that I've never purchased in my life. Did/does Tribute come in packs? I have no idea. I don't have a card shop near me that sells actual cards and Tribute never made an appearance in a big box store that I know of, yet Jeff found this semi-rare item in a discount box.

Oh, did I leave that part out? Apparently all these cards came from some crazy discount box that he happened upon. 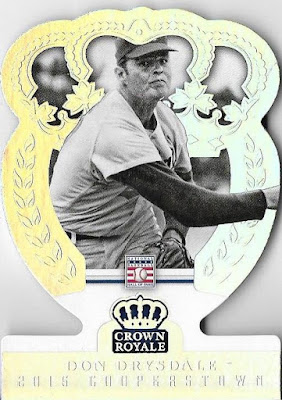 This was in a discount box, from what I understand.

It is from 2015 Panini Cooperstown, numbered to /75, die-cut a number of ways and looks like a giant mouth is swallowing Don Drysdale. I, frankly, would never pay cash for this if I stumbled across it, but I never would, and certainly not in a discount box. 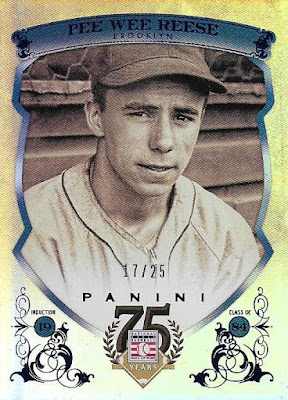 More numbered stuff. This time down to /25. Is this how underappreciated Panini is? I see Panini in card show discount boxes all the time. It's clear many collectors ignore it. But a numbered Pee Wee in a discount box? 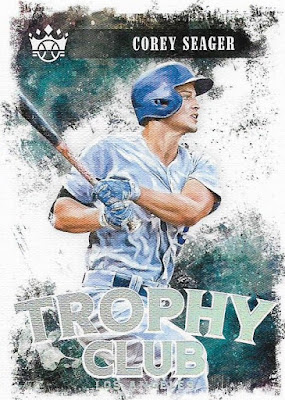 All right, this is from 2018. I'm guessing this wasn't in the discount box. Or maybe it was? I don't know what to think anymore after that Pee Wee.

I think I actually like the look of that card. 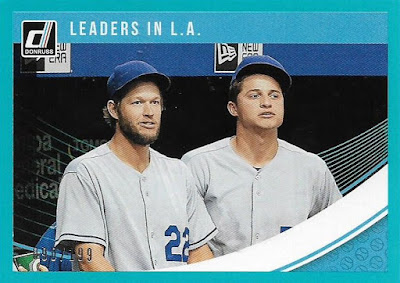 Yet another Panini item. This is a numbered parallel of one of the goofiest cards all year. Sure, this deserves to be discounted. Its value should be pennies. Even with the shiny border, I would hesitate grabbing this. 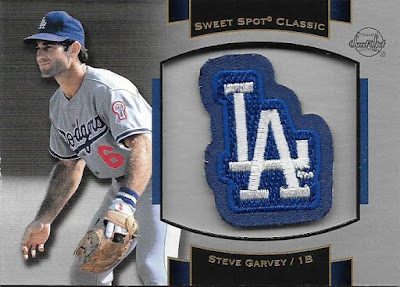 Ah, yes, a manufactured patch. I definitely don't seek these out. You don't want to know where I keep all my manu-patch cards. ... OK, I keep them in a box. But it's a box I never look through. In fact, I don't know where the box is right now. But, yeah, a picture of Garvey. I like that! 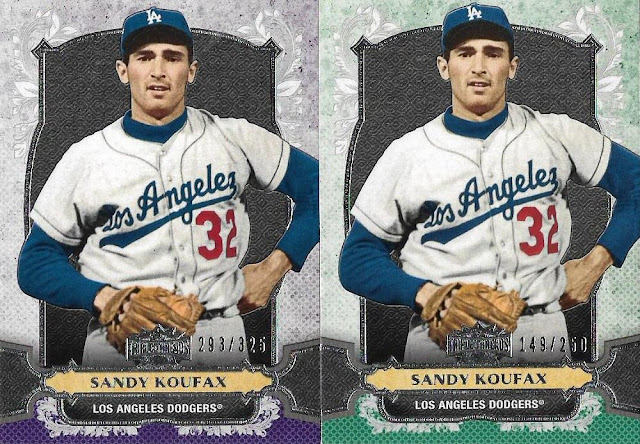 OK, yeah, weirdness. That's Triple Threads from 2014, of Koufax, in the discount box.

Triple Threads is not for me. It doesn't show up in the store down the street, it's way too fancy-looking for me, all that marble and other stuff as if the cards should echo when you put them in a box. The card thickness stretches pages and so on. This is never on my radar. 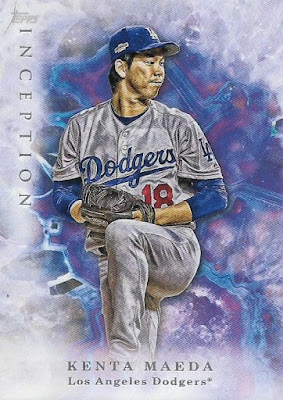 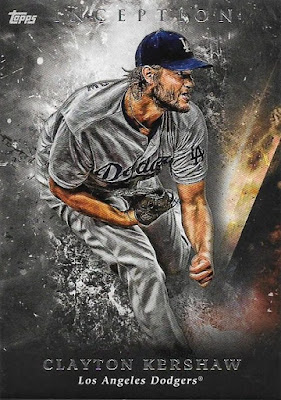 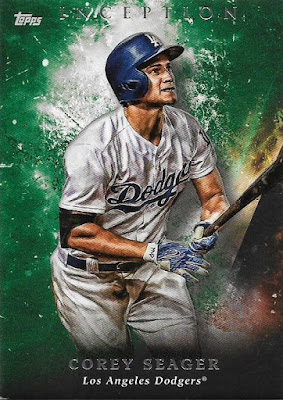 Inception, however, looks a lot nicer. Again, the thickness makes me never want to put it in binder pages. But they are snazzy cards. If they were readily available, I'd probably buy some. But since they aren't, I never think of them.

Yet, apparently they showed up in this discount box.

Actually, all of these cards, the high-end and the nonlicensed, the shiny and the patchy, I WOULD buy if the circumstances were right. In other words:

a) The cards were available where I live

b) The price was right

c) There wasn't anything cheaper or more licensed when I had cash to spend.

So, yeah, these are wanted cards.

However, Jeff did send something I definitely would never buy: 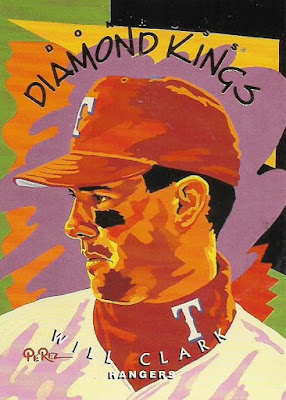 Not if it was the last card on earth.

(Always gotta be a smart-ass).

acrackedbat said…
Two cards on this page that would never make my collection - Will Clark and 2018 Donruss parallel. The others are all beauties in my binder! I'm a big fan of Cooperstown and the Royale Die Cuts. CC sent an awesome package!
November 18, 2018 at 9:11 PM

Nick Vossbrink said…
Hehe, the appropriately-named Cardboard Catastrophes it seems. I do love the maildays of cards I'd never buy. More often than not it confirms that my decision not to buy was a correct one but it's still nice to see things in the flesh. Also I'm in 100% agreement with you on all of these as being from sets that I'd never purchase.
November 18, 2018 at 10:21 PM

Fuji said…
I'm on the same page as you. I normally wouldn't look for any of this stuff (except for the Garvey manufactured patch), but if the price was right... I'd buy all of these cards and I'm not even a Dodgers fan.
November 19, 2018 at 11:33 AM

carlsonjok said…
LOL. I completely forgot about including that Will Clark.

Yes, I'm a smart-ass. No doubt about it.

Johnnys Trading Spot said…
I'm good with all of the cards rather brands. Most of the players are PC guys so I wouldn't pass on a deal.
November 19, 2018 at 6:24 PM