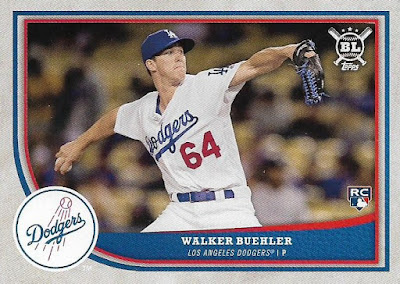 I've got a little housekeeping to do, tidying up several recent posts.

I'll start with the 10th Anniversary Giveaway. I've sent out about two-thirds of the packages. I'm going to try to get to the rest in the next week or week-and-a-half. I didn't think ahead and realize that I would be sending out all these cards during the gift-giving season. So I have to wait a bit for funds to regenerate to get the rest of the cards out the door.

Here is a look at my progress in sending out giveaway envelopes: 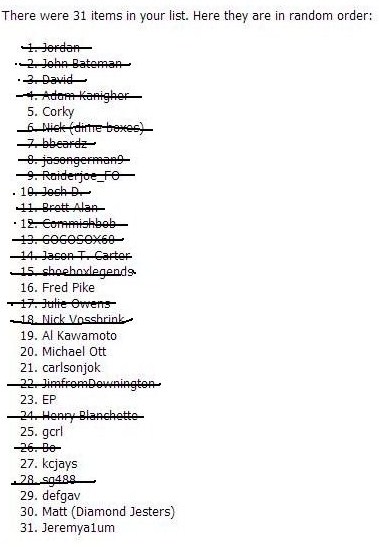 If your name is crossed off it means I have sent your giveaway prize. Hopefully it is in your possession. The two most recent envelopes I sent went to Henry Blanchette and sg488 so they probably haven't arrived yet.

I have packaged up cards for three Canadian readers but I need to send those all at once when I have funds because of the cost of sending cards "overseas." Also, I've struggled to find a good box to send Corky his 1993 Leaf cards so I'll probably need to get some postage wrap.

I thought I had an address for EP (who picked the '71 Topps 6-card lot), but I can't seem to find it. I'll need an email from him (nightlite77@yahoo.com) with an address.

Also, mr haverkamp, who is not on the above list, is still due to receive that Jackie Robinson SP card from me.

Moving on to yesterday's post (thank you for your kind words and wishes). It was suggested in the comments to turn the post into a Blog Bat-Around. I'm going to suggest that, too.

It's kind of an open-ended topic and you could probably take it in several directions. The general theme is: what memories are generated when you view certain cards or sets? Where were you in life? What were you doing when the store down the street was offering 1995 Fleer? OK we know that one. You were recoiling in horror. But what about 1988 Topps? 1997 Topps? 1989 Upper Deck? Pick as many sets as you like and see what memories they generate.

If there is enough participating, I'll make sure to follow-up to group all the blog bat-arounds.

OK, the rest of the housekeeping involves actual cards.

They were sent to me by Kerry of Cards On Cards. We must be at 60 or 70 transactions now. I lost track a long time ago. 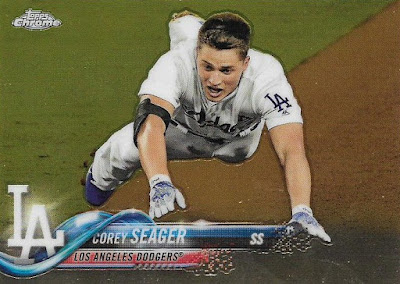 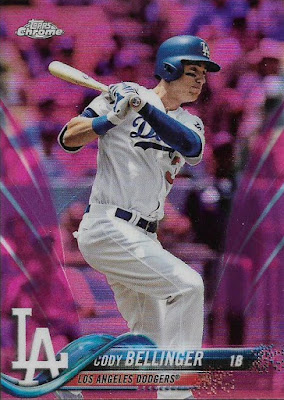 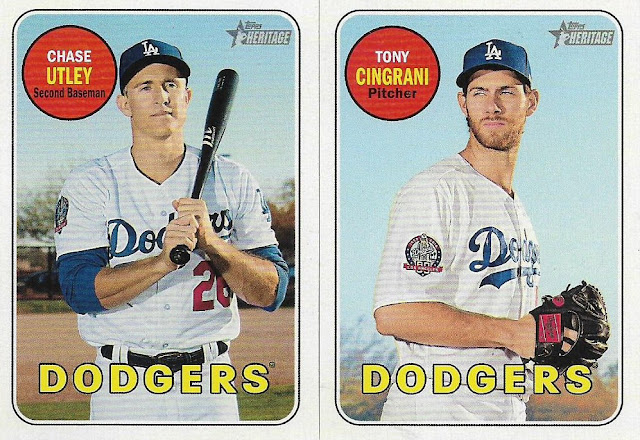 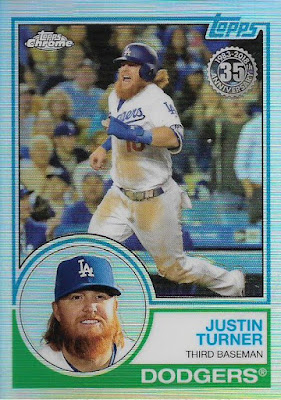 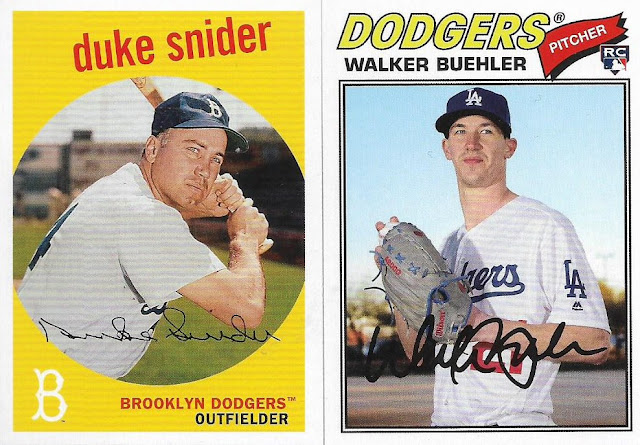 He sent some 2018 Dodger cards from my want lists and then he probably saw my post last week about reining it in on modern team collecting and probably figured "what the hell?"

I hope that makes sense. 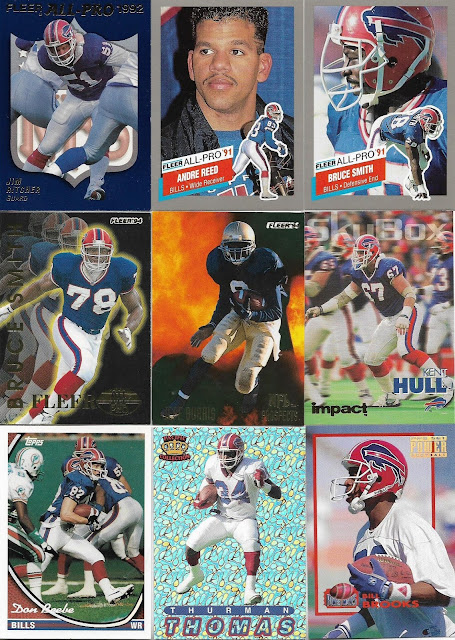 Kerry also sent a sizable grouping of Buffalo Bills cards as he recently stumbled across a bunch of football at the Goodwill.

These are welcome although I wish I had thought of this package before I went ahead and organized my Bills cards. I know I said on an earlier post that I'd only organize my Sabres cards because the Bills are stupid. Then Buffalo won two straight games and, while that's not 10 straight like the Sabres, it did get me to organize the Bills. 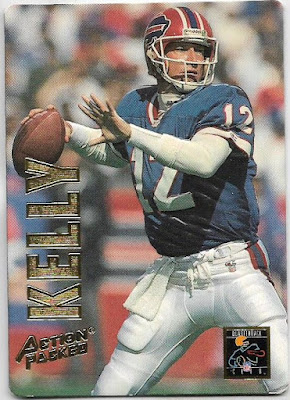 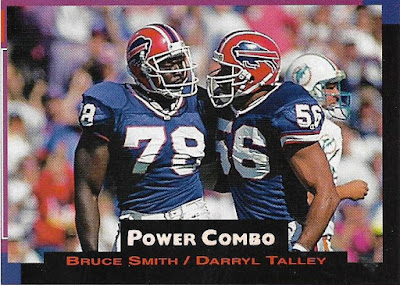 All of the cards sent were from the 1990s. I did not buy one, single, football card in the '90s. Nothing. Obviously football was all about gold like baseball was. 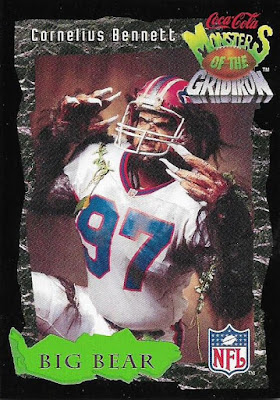 I don't know what the heck this is. Cornelius Bennett has apparently been eaten by a werewolf. 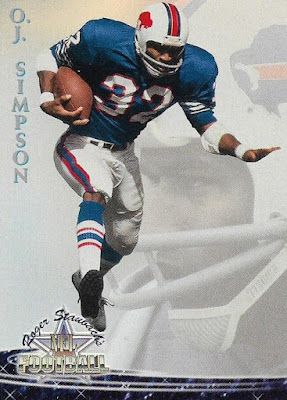 O.J. Simpson on a card produced by something called "Roger Staubach's NFL Football." It's actually a Ted Williams Company card. It was issued in 1994. Something else was happening with O.J. Simpson in 1994. Maybe not the greatest idea to put him on a card that year. 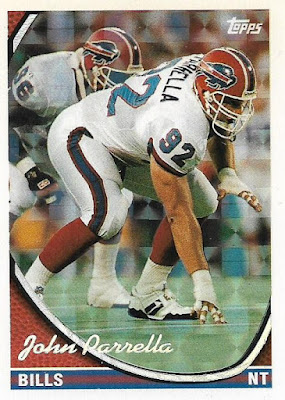 This is some sort of prism parallel from 1994. They were doing prism parallels in 1994? Isn't this pre-chrome? Pretty advanced if I'm calculating this right. 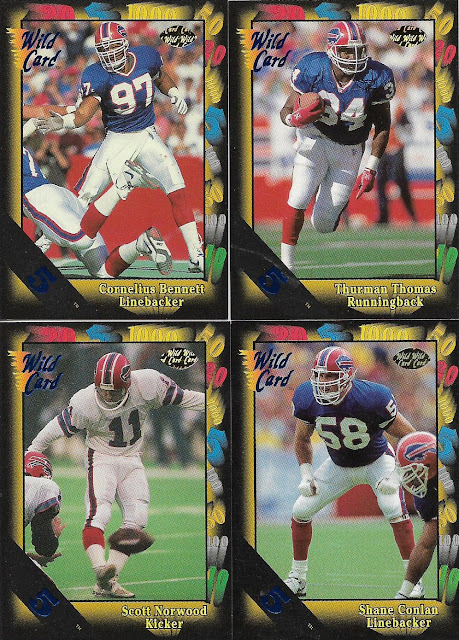 I don't know what these are, but I've seen them a bunch and I know supposedly they were hot stuff back in the early '90s. They are VERY '90s in the cheapest way possible. 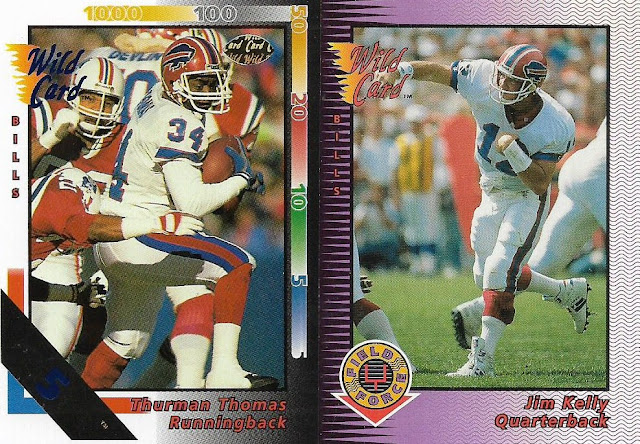 More WILD cards. I'm sorry, I should look these up and be an information blog, but I can't get excited enough to do that.

I don't expect to add much to my Bills card collection. Unlike the Sabres where I'll add some select cards, I have no plans to buy modern football cards, or go back and fill in all those past years that I missed. I have plenty already to satisfy my interests. My football card goals will remain steadfastly with the 1977 Topps completion quest until that's finished and then we'll see (I'm intrigued about 1979). 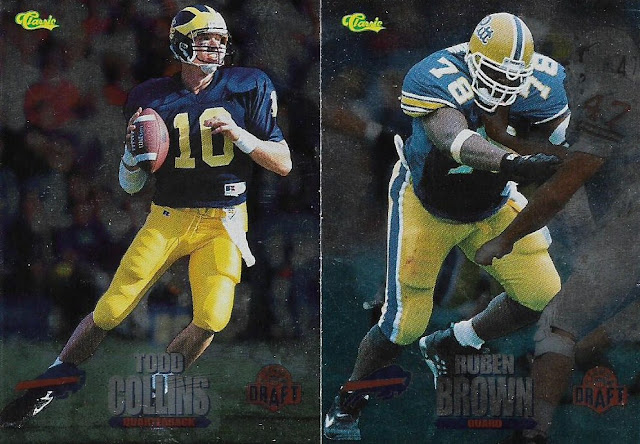 These -- no offense to Kerry -- I will never collect.

College football is right at the top for me when it comes to annoying sports. It is the only sport in which I celebrate the season's end every year. If there is a College Football Widow support group somewhere in Alabama, I want to join my sisters so we can throw a big bash when the whole travesty is finished with that annual disaster of a College Football Playoff What A Generic And Incompetent Name For A Final Let's Have Another Poll And 87 More Bowls Championship.

College football and the NFL are on separate planes and I don't like football cards mixing them up. Off to the box of rejects with these two.

But I appreciate the expanded card horizons and will still dabble a bit in hockey, football, tennis and nonsports.

And now you're up to date with where I am. I'm sure you all were wondering.

Chris said…
Ah, the Wild Card stripes. The only 1991-issue Brett Favre cards I will never own (or the draft pick autographs). The deal was, if you accumulated 5, 10, 20 duplicates and mailed them to Wild Card they would send you a single card with the 'stripe' reflecting the amount of cards you sent them. There are 1,000-stripe cards which blows my mind because who would accumulate 1,000 copies of the same card (oops, almost forgot Gavin's Grissom quest!)
November 28, 2018 at 7:42 PM

Commishbob said…
Greg, my '71 Hoyt came. Thanks so much. I'm slowly building that set. Maybe 'building' is overstating it, 'gathering randomly' is closer to the truth. And I appreciate the shiny Birds as well.
November 28, 2018 at 10:59 PM

It was truly a shame that the mostly wonderful new Topps product/set "Big League" did not bring back the combination of bubble gum and baseball cards.
November 28, 2018 at 11:51 PM

Old Cards said…
The Corey Seager card reminds of a shot of Pete Rose in a mid-air slide. Nice Duke Snider card. I collected football cards for maybe one year, when I was a kid. I have no interest in football cards or any other cards other than baseball.
November 29, 2018 at 9:33 AM

Fuji said…
Blog Bat Around = One less blog post idea for me to think of. I'm game.

Matt said…
Nice Bills additions! You know me and the 90s!