I voted for more cards of my childhood heroes 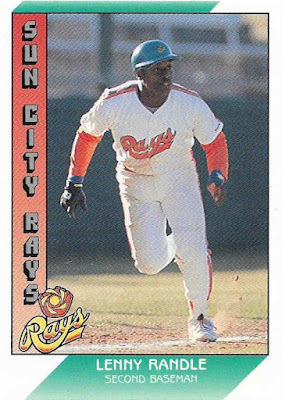 I cast my vote earlier today. I hope the internet nags are happy. Goodness. So much badgering. Does my music streaming service really need to be reminding me to vote?

Anyway, on the line at the bottom of the ballot, where it says "write-in candidate," I wrote "Lenny Randle".

OK, I didn't really do that.

But if I had thought of it while I was voting, I would have done it!  More people need to know who Lenny Randle is! More people need to know who Amos Otis is! Vote for Amos Otis! Vote for Dan Driessen! Shout Renie Martin's name on every street corner!!! Make the Google doodle one '70s or '80s player per day! Click on the doodle and find out who Jim Dwyer is. Or Tito Landrum. Or Ken Reitz. Am I the only who thinks this stuff is important? A little help here!

I guess the best I can do is continue to write about the players from my childhood, and the way to do that is to find as many cards as I can of those players. It's getting tougher. But I'm getting some assistance.

A few months ago, a couple of bloggers sent me cards from the 1989-90 T&M Senior Professional Baseball Association set. Those cards helped me relive all those players from when I was a kid and I had a hoot adding it to the binder.

There are at least two or three more sets from that short-lived league, but I hadn't planned to collect any more of them.

Then, Angus of Dawg Day Cards handed me nearly the complete set of 1991 Pacific Senior Baseball before we headed off to the card show last month. There are just five cards missing from it and I can pick those up easily. They're already in my COMC cart.

I felt a renewed sense of duty toward these cards recently. Like I said back on this post, technically I'm not a "senior." However, I happened to pull the movie ticket stub from Sunday's show out of my pocket yesterday. On it, it screamed "SENIOR".

Senior? What the hell? Then I remembered that AARP has entered my life. My wife used the senior discount for the tickets. Oh, dear, here it comes. The girl behind the ticket counter thinks I'm a senior. Everyone watching "Bohemian Rhapsody" thinks I'm a senior! (No jokes about how there are no young Queen fans because I know for a fact that's not true). I was mortified for a few quick senior moments.

But I'm over it. I'm not really a senior yet, but let's embrace some true seniors who once played in the Senior Professional Baseball Association! These dudes are OLD. 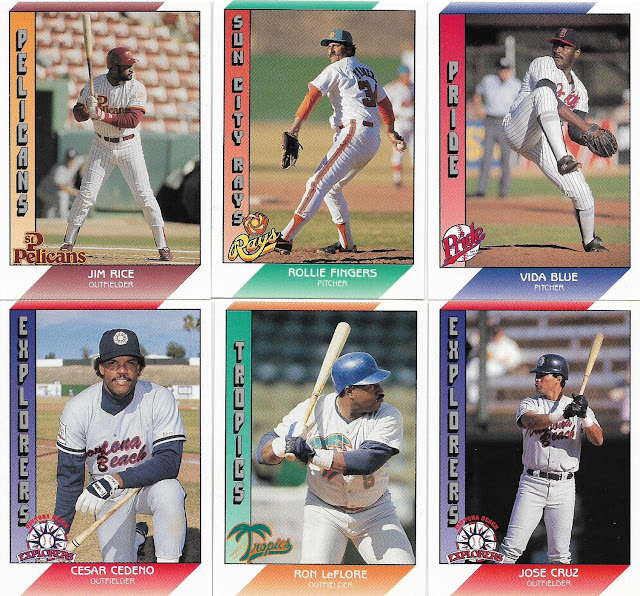 How about those Senior Stars? They could snap a young, up-and-coming ballplayer in half.

The 1991 Pacific Senior set is actually Pacific's second senior set after the less-appealing 1990 version. I like the '91 set because stylistically it matches the time period and also matches the sun-splashed locations of the league. 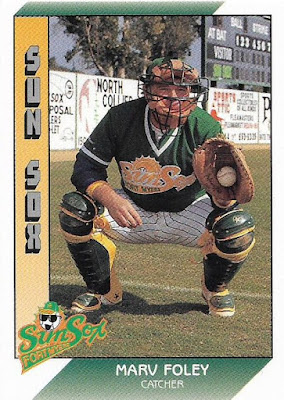 There are several interesting cards in the set. I love the backgrounds. Coca-colas signs all over the place.

I'm interested to know when these cards first appeared for sale because the league folded in late 1990 before even finishing its second season. By the time these cards arrived -- I'm guessing -- the league was dead. 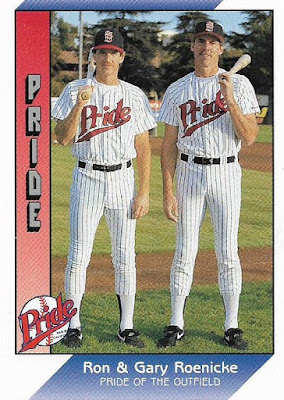 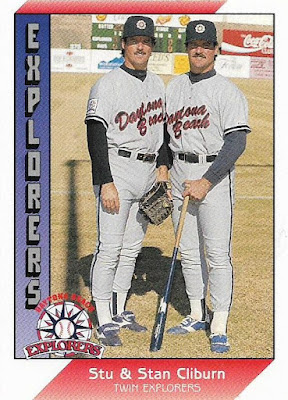 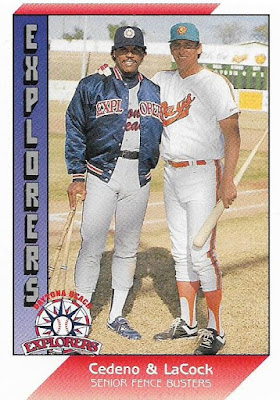 The combo cards are fun. There are several in this set. 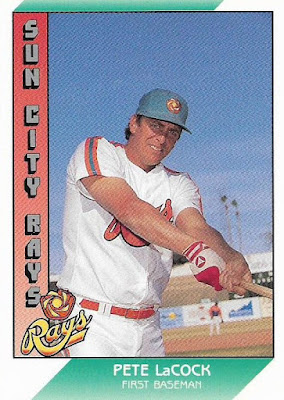 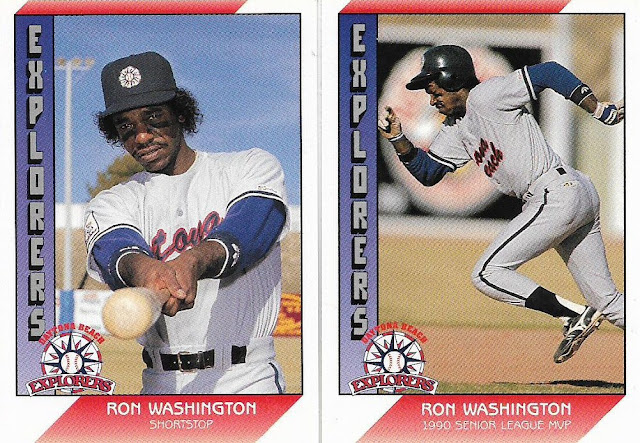 Some of the top players in the league receive multiple cards. One of those is ex-Dodger and future Rangers manager Ron Washington. Love that card on the left. 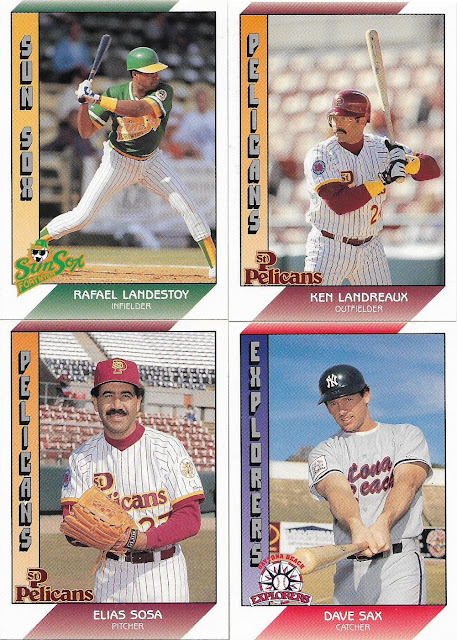 I like picking out the guys who once played for the Dodgers in these sets. 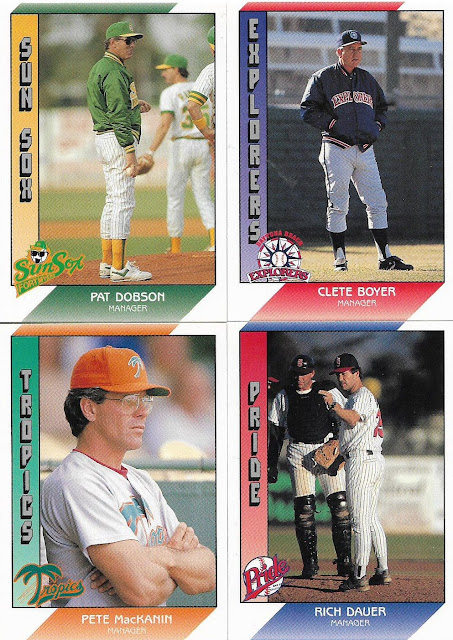 The managers for these clubs are interesting, too. Since everyone is from basically the same era, they're about the same age (I guess Boyer is an exception). How did they decide who would do the managing? 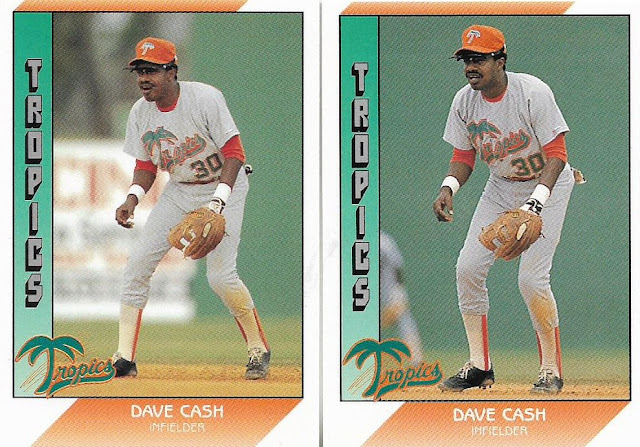 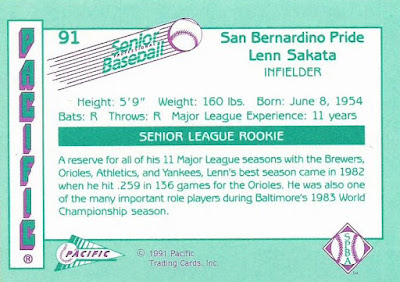 Speaking of the back, that's what they look like. Very Ocean Pacific. Classic for its time.


Angus handed me another set of interest as well. 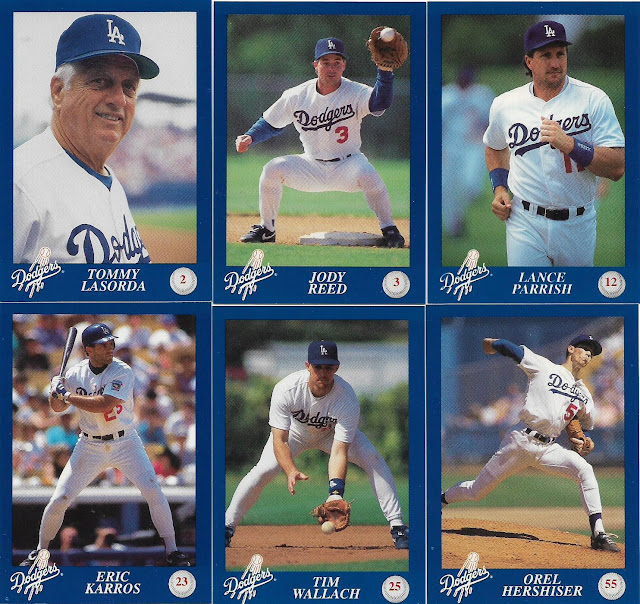 The 1993 Dodgers' D.A.R.E. "Police set" includes tell-tale signs of that year with cards of Jody Reed, Tim Wallach and one of the only cards that I know of with Lance Parrish wearing a Dodgers uniform. 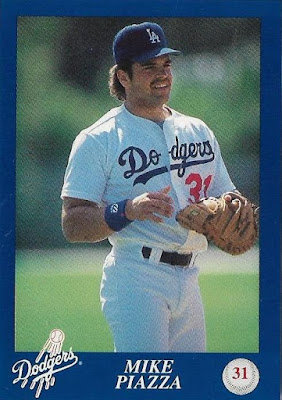 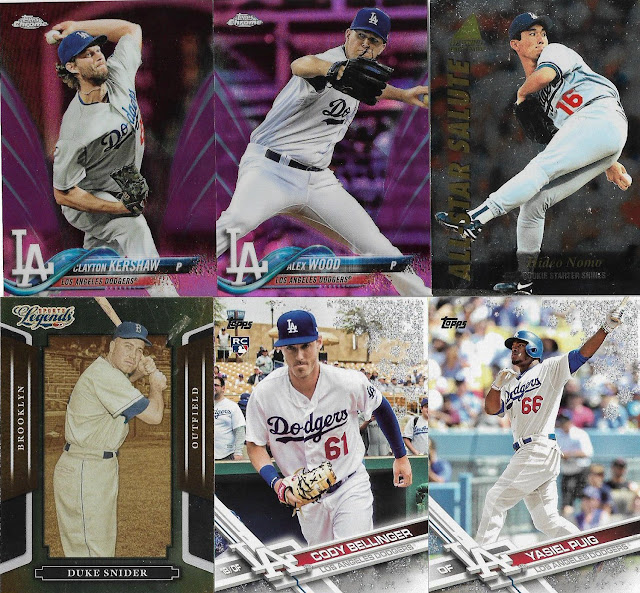 Angus did not forget more modern Dodgers cards either. 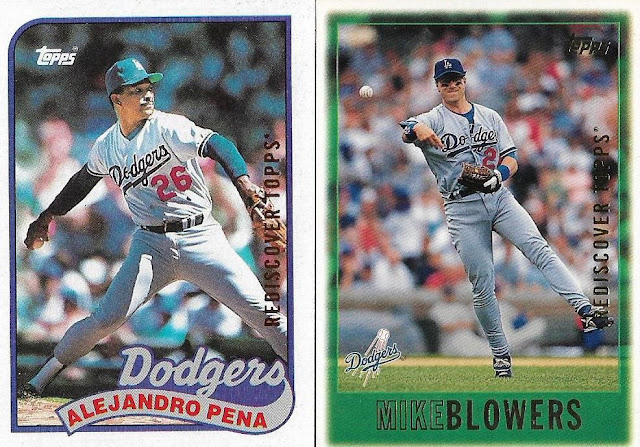 I would like to know if there are any team collectors who actively pursue buyback cards of their team. What kind of insane world is one entering doing that?

I happily take them if someone sends them to me, but there's no way I'm looking for a second version of a card just because it has a stamp (unless it's from 1975, of course). 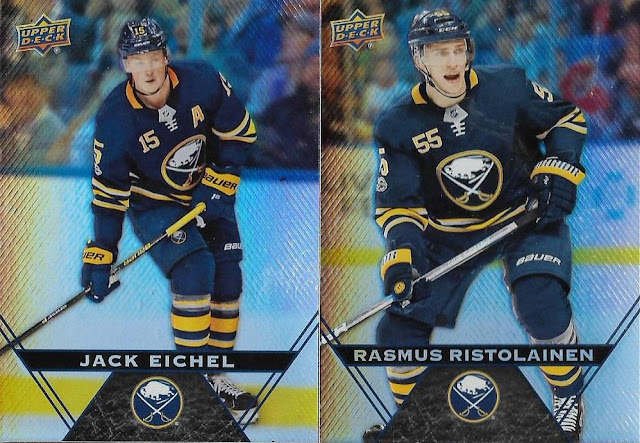 I might have to start watching Sabres games again.

The older I get, the less interested I am in new cards. In fact, just the other day, I took a look at my COMC cart, noted that I had far too many cards from 2017 and 2018 in it, and removed them and replaced them with cards of childhood heroes.

I'm probably going to be doing a lot more of that.

Bru said…
I have a big chunk of this set. Which five cards are you missing, because I might be able to save you - I dunno, a buck?

kcjays said…
Famous Amos Otis was one of my favorite Royals growing up. (A very close second to Cookie Rojas.)
November 6, 2018 at 10:05 PM

Fuji said…
Those Pacific Senior League cards are outstanding (especially the combos). Hope to find a cheap copy for my collection one day at the flea market.
November 7, 2018 at 8:37 AM

Peter K Steinberg said…
Those senior circuit cards are pretty awesome. The Ron Washington card looks slimy, is it?
November 7, 2018 at 8:42 AM

Defenders50 said…
I love how Pacific doesn't even bother with a logo because you know it's a Pacific card just by looking at it.
November 7, 2018 at 2:31 PM

Grant said…
Those Senior League cards are outstanding. I am especially fond of the '90 Jim Nettles error card.
November 7, 2018 at 4:33 PM