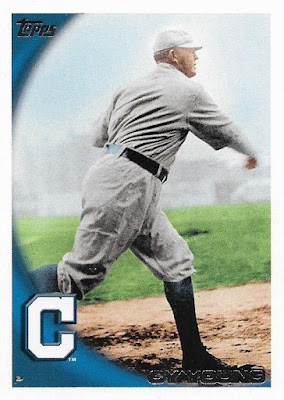 The 10th anniversary giveaway has come to a close. But first I need to get rid of this 2010 Topps short-print of Cy Young.

It's the last prize left and an interesting if I can say so myself. 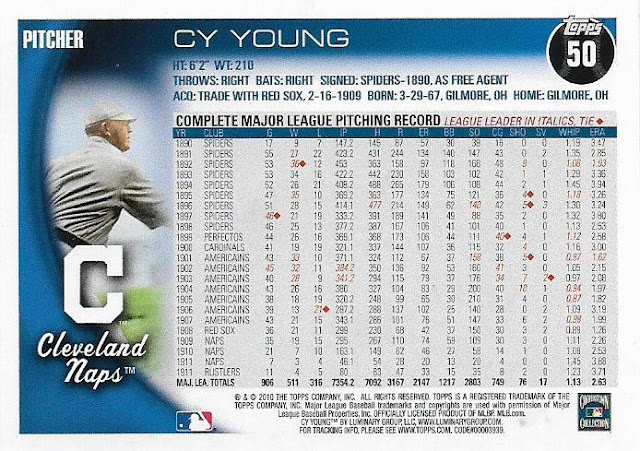 I mean look at those stats! And those teams? The Spiders? The Perfectos? The AmeriCAINS?? (What the hell, Topps, it's supposed to be the Boston Americans).

This card is destined for Sport Card Collectors, if he wants it. He just has to let me know by 8 p.m. EST Monday. Otherwise it goes to Bru. Or Fuji after that.

I will be sending out prize packages hopefully starting the end of this week. I can't send them all out at once. I don't have the time nor the money.

Fortunately, Commish Bob of the Five-Tool Collector helped in the money department by donated nearly two-dozen stamps to the cause! Thank you very much! That is a big assist. Especially for someone who is paying for a kid in college.

So I'll start sending out prize envelopes, starting with the first people who selected, and hopefully by the end of the month everyone will have been sent their cards. So I'm on the record of getting everyone's prizes correct, here is the list of them:

Phew! Let me tell you, that's a lot of organizing. I think -- I THINK -- I have just about everyone's address (need to double check Mr. Bateman). I'll probably harass you in a blog post if I don't have it.

But it seems like most people got a card they wanted so that's worth it. Thanks for picking quickly so I didn't have to drag this on for two months.

So, other than that, there's not too much else card-related I have to mention.

I did go to see "Bohemian Rhapsody," the Queen biopic today. I'm not much of a movie watcher anymore (the endless trailers confirm why), but I can't pass up a well-done tribute -- albeit playing fast-and-loose with some details -- to one of the legends of my radio youth. I went for the music and the ending does not disappoint. 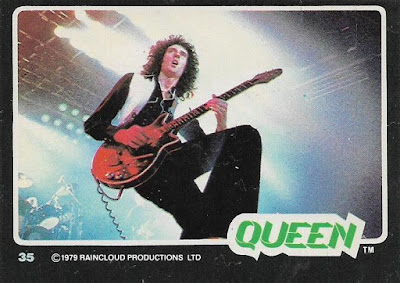 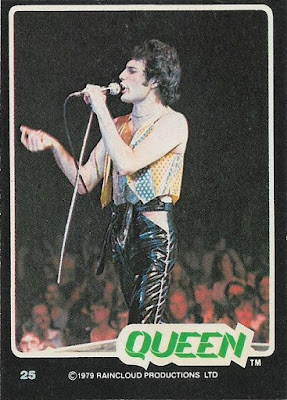 Here are a couple of Queen cards in my collection.

Finally, I received a package from one of the giveaway participants, Jeff of Cardboard Catastrophes just the other day. He sure has been hauling in the vintage lately. You'll see the cards he sent some other time, but how about this pin?: 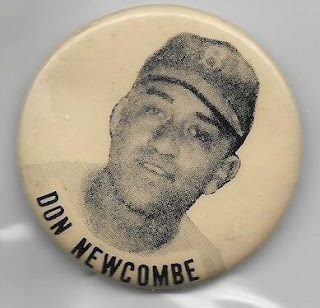 That's quite the relic from the past. Very cool. I don't know how old it is. I'm going to say it's as old as Newcombe pitching for the Dodgers, even if it isn't.

I'm probably not going to try to pin it on myself or anything else though. 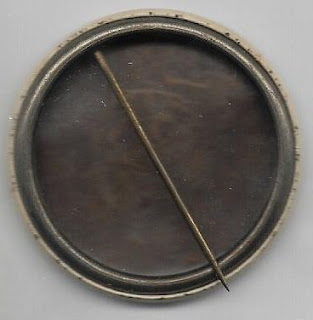 That pin sticks out a little too far and I don't know how many tetanus shots I'll need if I accidentally poke myself.

night owl said…
SportCardCollectors said via Twitter he will take the Cy Young card. Giveaway officially over!
November 4, 2018 at 8:36 PM

Billy Kingsley said…
Congratulations once again on 10 years! I specifically stated out of it so as to let people get prizes they really wanted instead of me just taking them because they were free.
November 4, 2018 at 9:45 PM

Fuji said…
I can't wait to watch Bohemian Rhapsody. Probably won't make it to the theaters... but I'll either buy it or watch it on Hulu, Amazon Prime, or Netflix when it comes out.

Brett Alan said…
Thanks again for the contest.

I can't believe Nick missed Cy Young's 11 games with the Boston Rustlers in the Short-Term Stops series!
November 5, 2018 at 4:21 PM

acrackedbat said…
I'm looking forward to the movie. Your review is enough to make me fork over the ticket and popcorn dollars. And thank you again, for the sweet card.
November 5, 2018 at 8:44 PM