The 10 worst Brewers cards in my collection 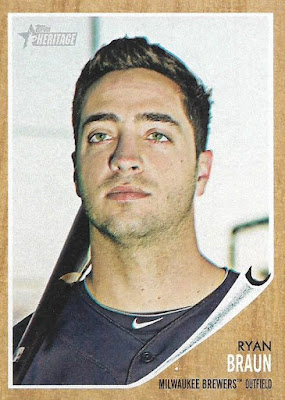 As often happens during the postseason, I select a participating team and try to find a few cards from that team that I enjoy. It helps me appreciate the teams involved a little more as well as the cards that I own.

I've even done this a time or two for teams that are playing the Dodgers in the postseason. I don't know why. I suppose it's my way of making a peace offering to my foes. And so I started making a list of some of my favorite Brewers of the past in keeping with this year's NLCS.

Then I decided: I'm not doing that.

But I'm sick of being nice to the team that's trying to beat my team, especially when it's the team that suddenly finds its bandwagon full. I've dealt with this for three years now. Two years ago, people wanted the Cubs to beat the Dodgers because --- ooooh, it's been sooooo long since the Cubs won a Series. Then last year, people wanted the Astros to win because --- ooooh, they've neevvver won the Series. Now we're supposed to do the same thing for the Brewers because of some other soooooo long thing, plus Bud Selig.

Well, how about rooting for the team who's made it to the postseason six times in a row and still hasn't won? How 'bout them?

It's time to take no prisoners. Time to showcase the 10 worst Brewers cards in my collection. Get ready for a lot (and I do mean A LOT) of Ryan Braun. 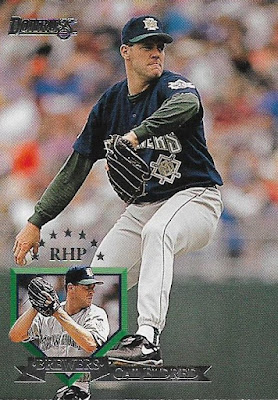 It's a good thing I didn't collect during the mid-1990s. I don't know if I could handle that much Brewers uniform. Those mid-decade things were atrocious. The crossed bats through a muddled "MB," the dark blue softball tops, the overload of green. Just eeewww. 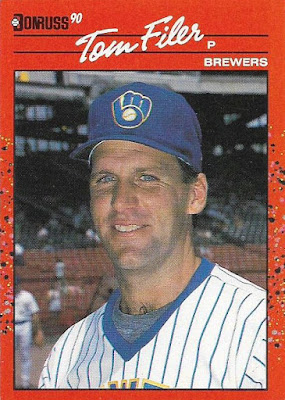 A recent worldwide poll determined that the dullest baseball card ever made was of somebody named Tom Filer in the 1990 Donruss set. For once, the world is correct. 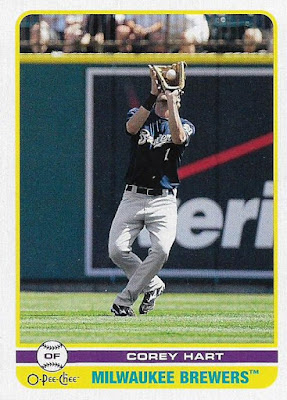 I can't figure out this card for the life of me. It's essentially a faceless card of a cross-legged dude. I know this OPC set was supposed to be paying tribute to pictures and sets from the '70s, but not even the '70s did stuff like this. 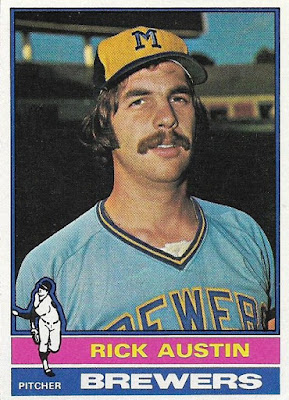 To those who weren't collecting right along with me in 1976, they probably see nothing more than a bad-ass '70s pitcher. But that's not the case at all. Austin's ERA is 4.60 for his career on the back of his card. He has minor league stats stretching back to 1968. There was even a detour to Japan. The card I owned of him featured a rip in the top-center that just seemed to fit with this pathetic piece of cardboard. In fact, seeing this card with sharp corners and no rip is still weird for me. 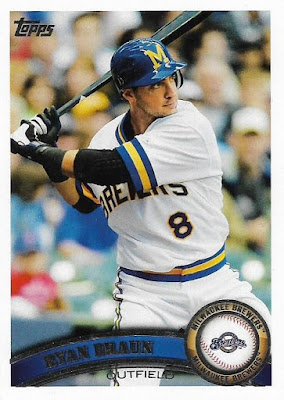 Here come the Brauns. This is card No. 1 in the 2011 flagship set. It is a card that drives me to distraction. WHY IS THE M SO HUGE ON HIS HELMET?????? Why? Every time I see this card, I ask the same question. 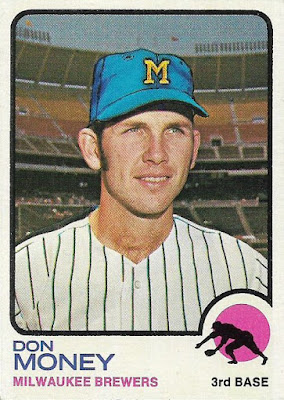 I would never classify many of the airbrushed cards -- and the Brewers have their fair share -- as the "worst," but this one is just dumb. The color blue used for the cap has never been used in anything other than comic books. The Brewers were a long way from wearing pinstripes -- those are Phillies pinstripes that the airbrusher didn't even bother to cover with a stroke of white paint. 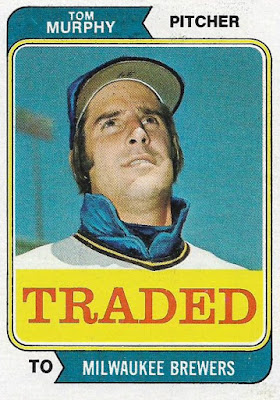 The upturned collar is baffling. I'm assuming that the collar really existed and wasn't drawn in by the airbrusher, but who plays like that? 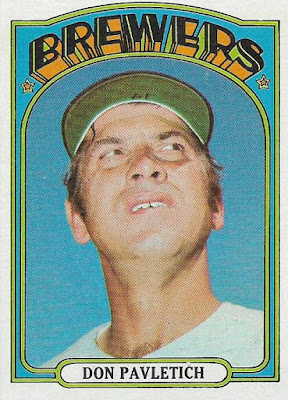 There are many cards of the 1960s and early 1970s where it is very difficult to determine from the photo that person pictured is an actual ballplayer. This may top the list. There is no visible sign he hits or throws a ball for a living. If I didn't know this was a baseball card, I might think that this is the town grouch who has just stepped out of his apartment in his undershirt only to hear loud music coming from the third floor of the apartment and he is looking toward the source, ready to give them a piece of his mind. 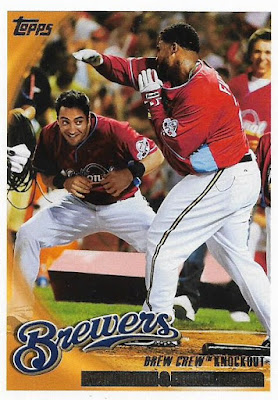 In 2010, Topps thought we should be as enamored by the Brewers' choreographed antics as they were. But actually, they became annoying pretty fast and they weren't any more pleasant on baseball cards.

But that didn't stop Topps. Braun and Fielder are not only on this particular checklist in the 2010 set ... 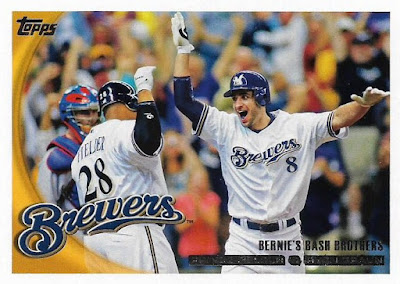 ... but they are on this particular checklist, too, because we need a SECOND checklist of these two yokels, don't we? 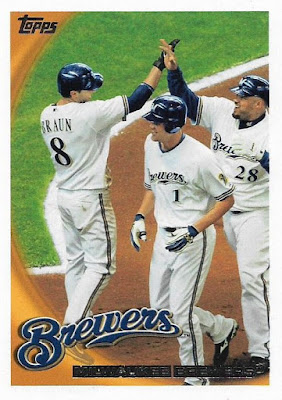 Sheesh. Why in the world did I complete this set? The Braun-Fielder-Weeks Brewers are easily my least favorite Brewers of any era. 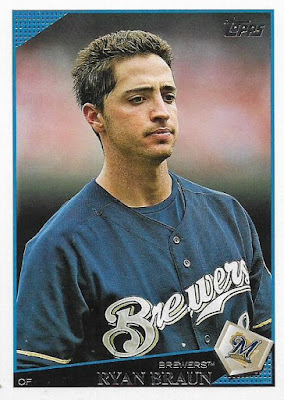 A sad card of a sad-acting individual. I guess it was appropriate for what was to come.


Truth be told, if the Brewers happen to win this series, I may end up rooting for them to win the World Series, which is actually something difficult for me to do when a team beats my Dodgers.

But I'm not expecting it to come to that. It's time to root for my Dodgers, even if everyone else is rooting for that team that can't decide if it belongs in the American League or the National League.

Old Cards said…
Hoping for Dodgers vs. Red Sox. Although the Brewers/Pilots and the Astros have been around since the 60's, they still seem like expansion teams. I like tradition in baseball.
October 12, 2018 at 10:11 PM

Brett Alan said…
The sad thing, instead of covering the pinstripes, they actually took the time to change their color, despite the fact that there was no Brewer pinstripe color to match. And if the Brewers HAD worn pinstripes, they wouldn't have been THAT color!

I can actually picture that Corey Hart picture on a 1973 Topps, except it would be much smaller and you'd see two other fielders and not know which one was Hart. I do hate it when you can't see the player's face on the card (although judging by the Dime Box Frankenset voting, many people disagree with me).
October 12, 2018 at 10:49 PM

Jim from Downingtown said…
And for the Don Money card, the Phillies wore red pinstripes, not blue. So the airbrusher took the time to neatly paint each one blue, instead of the easier task of making the entire uniform white. I mean, it couldn't have turned out any worse than that cap!
October 13, 2018 at 12:09 AM

Corky said…
On,y two sports commissioners irritate me, Bud Selig is one and anything connected to him gets a big BOO! from me. David Stern is the other one for having a personal grudge against the Sonics and working with the liar out of OKC to steal them.
October 13, 2018 at 12:55 AM

Jamie Meyers said…
Entertaining post. I have two of those ten cards signed -- the Filer and Money cards. Tom Filer is a pitching coach in the Pirates' system these days. About as nice a guy as you can find. He has signed two of those '90 Donruss cards for me, which means I only had two copies of it in the house. That's surprising in an of itself, given how much of that crap I bought that year.
October 13, 2018 at 8:03 AM

Jeremya1um said…
I almost forgot about Selig being with Milwaukee. Just another reason to root against them and for a Dodgers-Sox series.
October 13, 2018 at 8:17 AM

Johnnys Trading Spot said…
I'm torn. On one hand the dodger blew away my Braves, a good reason to root for the Brew Crew, the Braves came from Milwaukee is another. On the other hand I despise Bud Selig, big time! I guess I'll just route for the winning NL team in the WS.
October 13, 2018 at 11:10 AM

Fuji said…
I've jumped on all three bandwagons you've mentioned. The reason? The Padres suck and haven't gone to the playoffs since 2006. And the A's finally made the playoffs this season, but were knocked out immediately. So it's either root for teams like the Brewers or start watching football and hockey. I'm not ready to do the latter.
October 13, 2018 at 11:31 AM

BaseSetCalling said…
Perhaps the most uniformed-challenged team ever. I mean, what does a ‘Brewer’ even look like? What color is involved - only the gold of the grain I guess.

Currently, they do have the grain worked into the logos, etc. Yawn. Grain! Even ‘Cornhusker’ iconography is more exciting than grain.

Sure, most everyone likes Beer. But who expects The Beer Guy to win an athletic contest that doesn’t in any way involve drinking the Beer?

Then when they did finally ace the creation of a baseball uniform - the baseball-in-glove icon (seen on Filer’s cap up there)that is also cleverly the letters “m” and “b” - they ditch it for the boring dark blue Grain homage of today.

Just take a look at the crowd shots from Miller Park and you will see near 50% of fans wearing the old cool stuff. Speaks for itself on how smart of a Uni change that was.

Matt Prigge said…
I'm always a little surprised at how baseball fans in general hate Selig, while fans in Milwaukee adore him. He was utterly neglectful of the Brewers in the 90s and I knew they'd never turn it around as a franchise until his family sold the club. He made a lot of bad decisions as team president that he forever gets a pass on. And as commissioner... I mean, I doubt anyone would have done anything different in regards to the strike or steroids. He was a stooge of the owners because that's what the commissioner has always been.
October 14, 2018 at 2:49 PM

Peter K Steinberg said…
This was a fun post to read and consider. Very unique approach to the games being played. The Dodgers have had five previous opportunities to try to lose the World Series; why do they deserve another shot?
October 14, 2018 at 7:09 PM