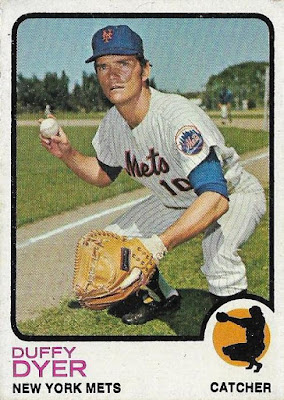 One of the things that I've most enjoyed about my continuing quest to complete the 1973 Topps set is the perspective that these cards provide.

I do love backgrounds on my cards, something that is in much shorter supply on modern cards. As I've mentioned before, I like seeing "baseball" on my cards. That's not just the player in a uniform. It's other players and the field and the stands and fans and fences and equipment and everything that makes up this great game. I collect Baseball Cards, not merely Some Dude's Cards.

Take a look at one 1973 Topps card in all of its background glory: 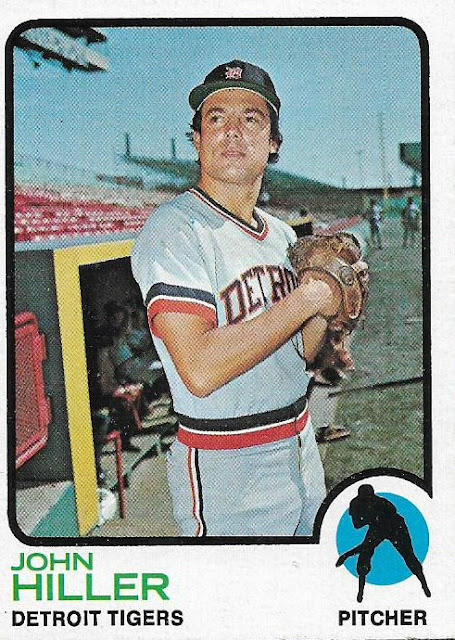 Drink in all it has to offer.

Empty stands.
Guys chilling in the dugout.
Equipment on the ground.
Players in the distance with hands on hips.

There is a story to these cards.

Recently I received two separate stacks of 1973 Topps from two of the collecting veterans of our community, Mark Hoyle and Commish Bob. (I would like to state for the record that I am younger than each of them).

The two stacks combined was close to 100 cards, some of them the same cards, obviously.

This was an excellent chance to kick off another edition of "Ranking 73ness," which I started last spring.

If you've forgotten the rules, here they are again:

After totaling all the cards that Mark and Bob sent me, here are the top 10 most 73ist cards of the bunch in reverse order: 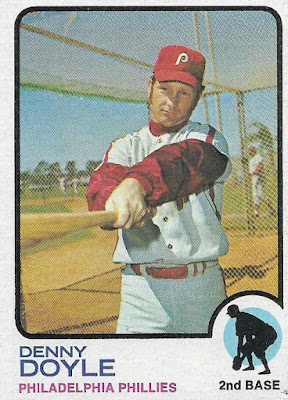 I've just added the Phillies uniforms to the Padres and A's. Because I love this card so much. 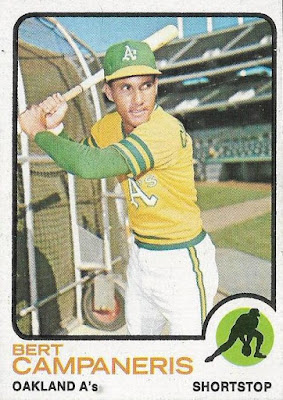 I am not above handing out surprise bonus points for batting cage wheels. 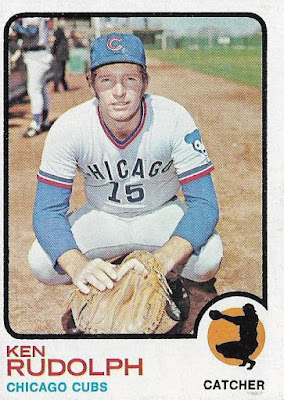 Cards need to show catchers in their crouch again. 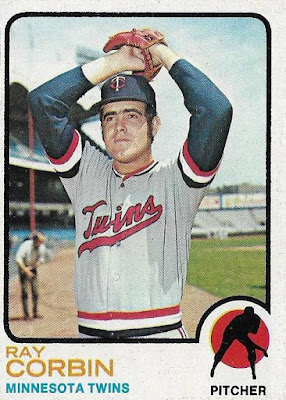 The guy in the background appears to be measuring something? But for a moment I thought a dad got on the field to play catch with his son. 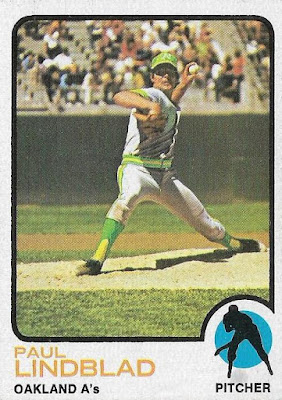 Lindblad appears to be airbrushed out of his Rangers (or maybe even Senators) uniform from head to toe. I doubt I would have noticed this as a kid but that sickly shade of green does not appear standard-issue. 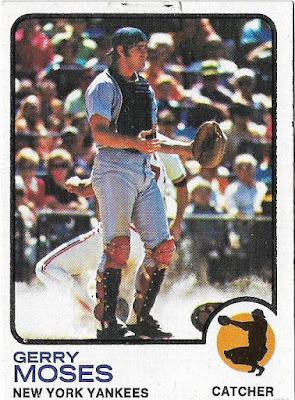 If Panini were to use this photo -- and I think it can because no MLB logo is apparent -- it would be the best Panini card ever. 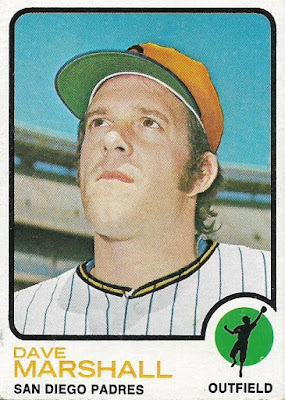 If I was collecting as a kid in 1973, I would know that something was very wrong about what Dave Marshall was wearing on his head. He seems to be bothered about it, too. 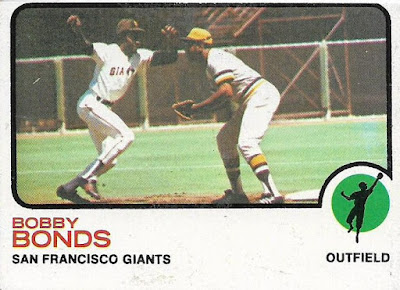 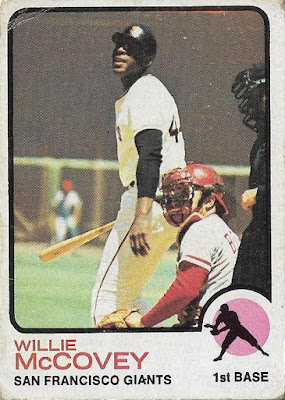 I'll be interested in seeing who can top Willie McCovey for 1973ness. 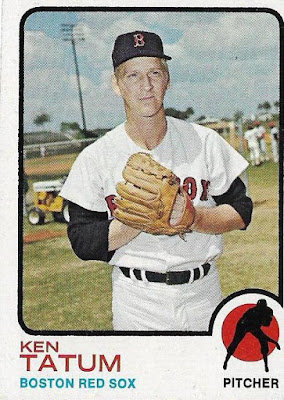 And the most 1973ist guy in a double shot of stacks.

There were quite a few more '73 cards than those 10. I feel bad that I haven't shown them, so here you go: 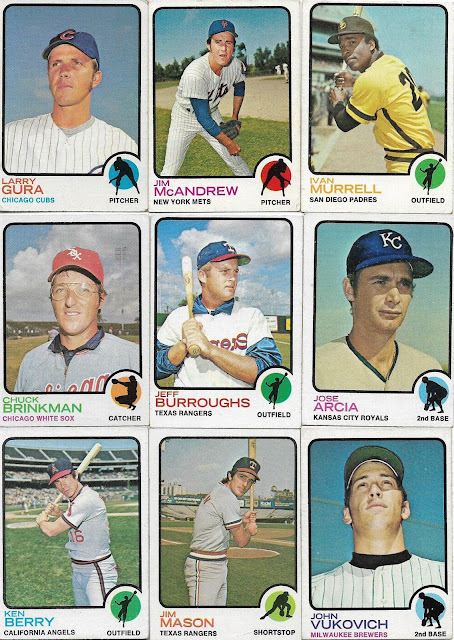 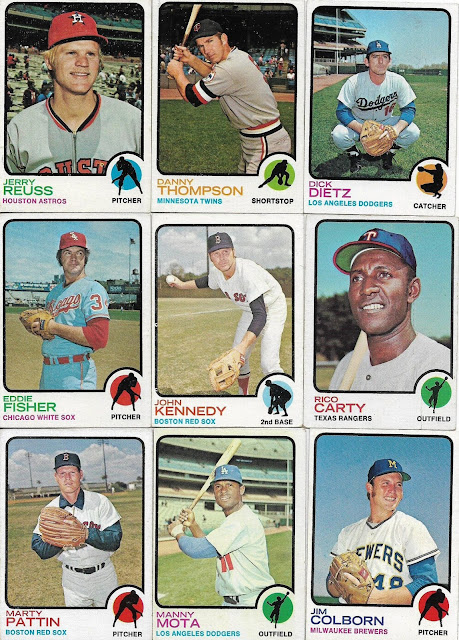 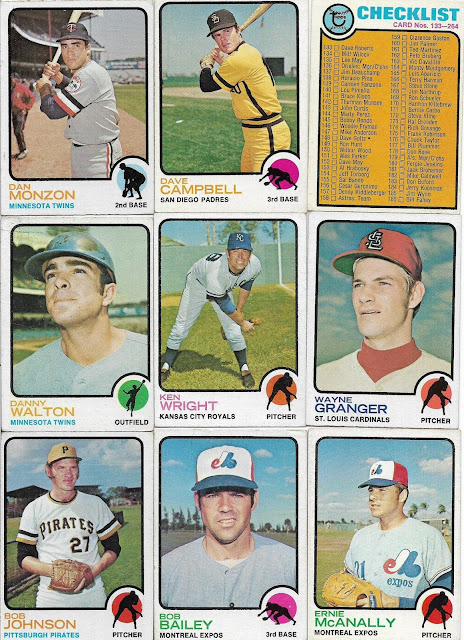 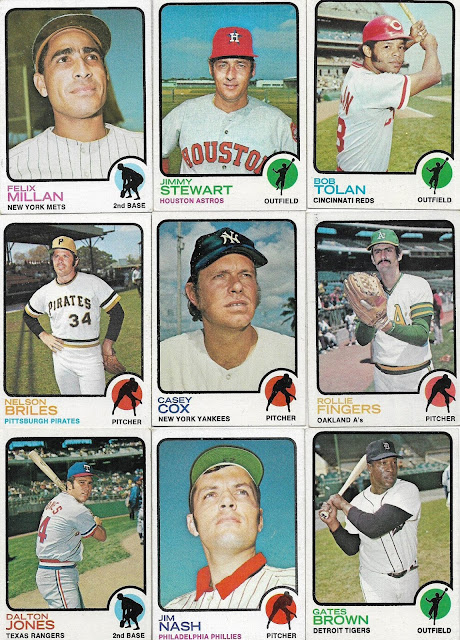 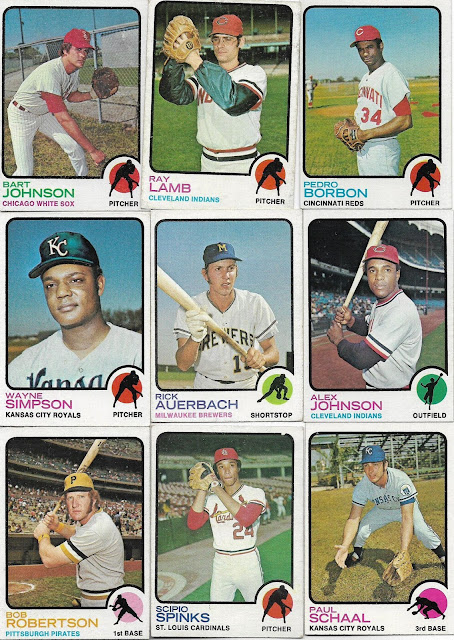 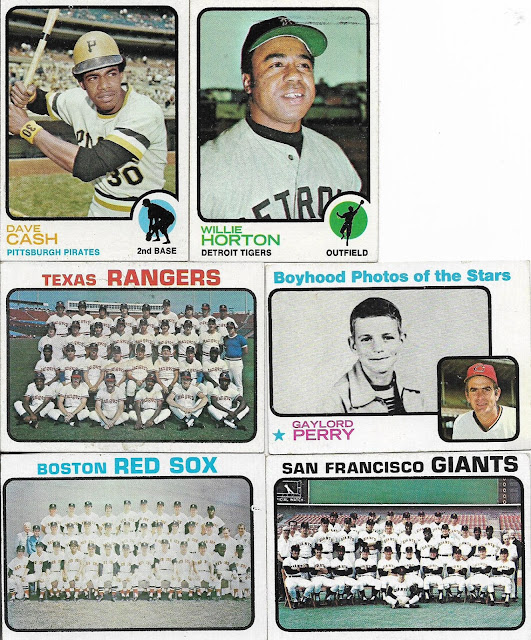 I've got to get the managers in because there won't be any in 2018 Topps: 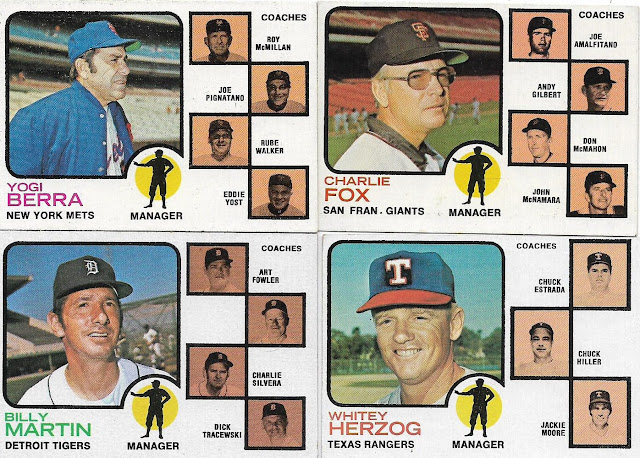 Oh, and a Kaline. 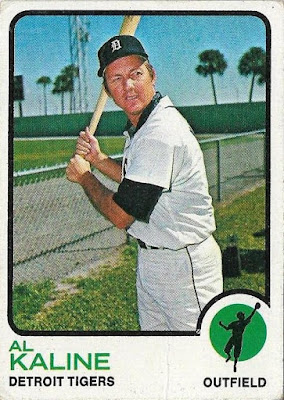 It's not going to do very well in terms of 73ness.

Nick Vossbrink said…
Those Boyhood Photos cards remain one of my all time favorite subsets. And it's starting to look like the 1973ness is especially strong with the 1973 Giants team set.
January 30, 2018 at 8:36 PM

Commishbob said…
::raises hand:: Sir...may I propose that wearing a windbreaker under uni top is a 70s thing and should be be worth a point...maybe two? And having collar of said windbreaker OUTSIDE of jersey be a bonus point? ::sits::
January 30, 2018 at 8:42 PM

steelehere said…
I think you could probably create a separate ranking system for the manager cards. Besides ranking the manager's photos, other things to rank could be number of Hall of Famers among the coaches, coaches with unique names, coaches/managers on teams they're not known for. Whitey Herzog/Rangers, John Roseboro/Angels and Warren Spahn/Indians stand out.
January 30, 2018 at 9:28 PM

Old Cards said…
Great post. You have made me have more appreciation for my 73 cards. Agree with you on the goodness of the background but I do want to see the dude, whose name appears on the card, prominently displayed and the cards you show here do a good job of that except for the Bobby Bonds card. Even with Willie Stargell on it, this a ridiculous card. Two players too far away and the same size. The featured player should be in the foreground. The Dave Nelson and Willie Davis cards are 2 other examples.
January 30, 2018 at 10:59 PM

Fuji said…
Not sure which one I like more... Kaline and palm trees or Campy at the Coliseum. It doesn't matter... that well cropped action shot of Lindblad takes both of them down.
January 31, 2018 at 12:26 AM

Mark Hoyle said…
Hope there weren't to many dupes. You should have this finished pretty soon. I don't think I'm too much older than you.
January 31, 2018 at 2:09 PM

Captain Honkass said…
I applaud your efforts into trying to define your personal ranking categories for defining favorite cards... I'm pretty all over the place in my Top Whatever countdowns... To try to define them would be an exercise in futility...
January 31, 2018 at 3:02 PM