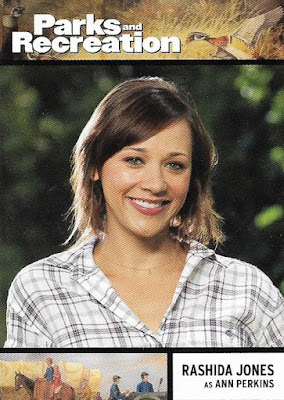 When I was in college I took a journalism interviewing class. Taught by a former reporter and editor at The Buffalo News with a sarcastic/sadistic streak, it was the most challenging and probably the most influential class of my entire college career.

I likely have never encountered interviews in my professional life as difficult as three separate ones I did in that class.

Anyway, one of the students in that class was your stereotypical bleach blonde of the late 1980s. My professor liked sports and so did many of the males in the class. She looked at sports with disgust and went on a brief rant about them one time, but fortunately I can't recall her words.

Obviously, as someone who blogs about sports and whose work life and free time is about sports, I didn't agree with her. I still don't.

That's not to say I can't enjoy a world without sports.

I can't do a post about my all-time favorite nonsports sets. I just don't know all that many of them and I don't have the cards. But I can do a top 10 list like Fuji, even if his nonsports cards are far fancier than anything I own.

So instead of fancy, I'll just expand the countdown a couple of spots. I'll list my top 12 favorite nonsports cards in my collection.

This one's for you, bleach blonde in interview class, and for all you other nonsporty types.

MY 12 FAVORITE NONSPORTS CARDS IN MY COLLECTION 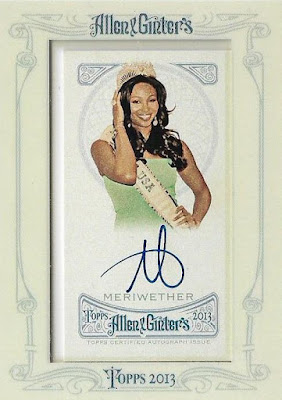 There is something awesome about signing your name with a single letter that Miss USA can get away with but no athlete can, or at least shouldn't. If you get a crown, you can sign a single letter. 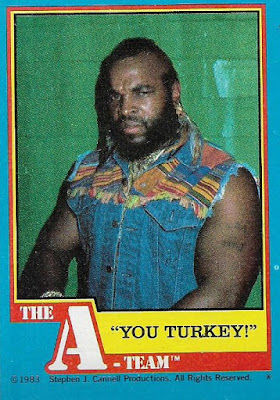 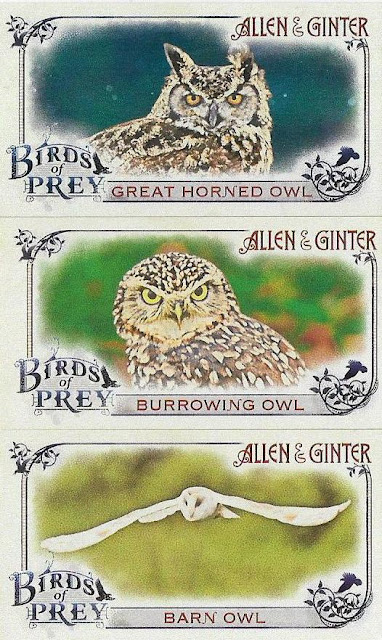 Yeah, it's three cards instead of one. When Topps makes owl cards and you're calling yourself an owl then you get to show as many as you want. 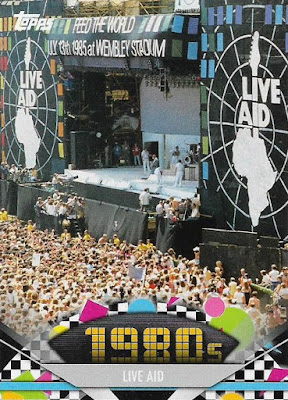 "Live Aid" was about as '80s as the '80s could get. But that's not a bad thing. In the summer of 1985 I was between colleges and on vacation with nothing to do. I watched and listened to the entire day and night, from London to Philly, on the radio and TV. It was a unique moment. 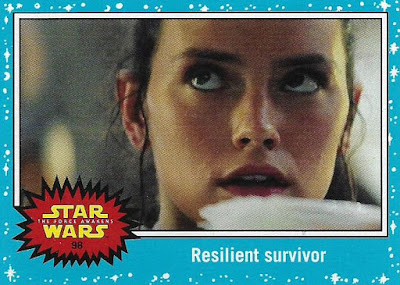 I've long lost touch with the Star Wars series, but I've always liked Daisy Ridley (don't even ask me what character she plays).

How much do I like Ridley and this card? 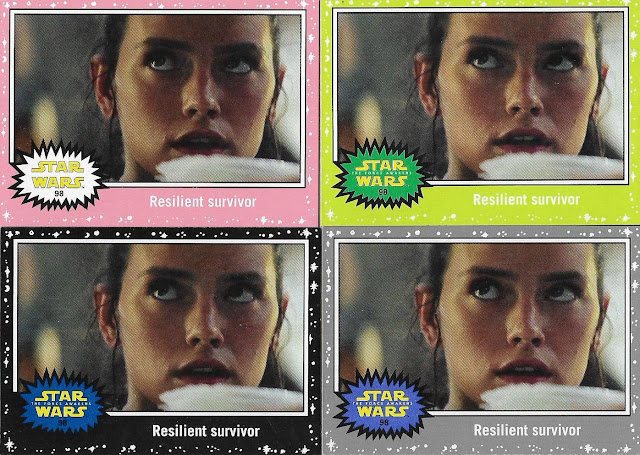 Only the spendy cards are left. 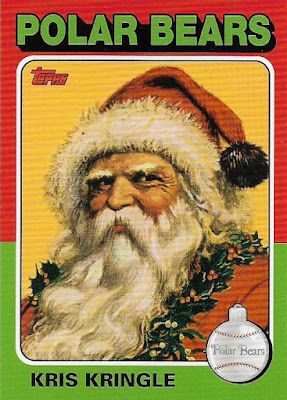 Santa Claus on a 1975 Topps card? I am there with jingle bells on. In weaker moments, I think about nabbing this entire Santa Claus set. It'd be a fun little item to have, even though sometimes I think this set is more weird than quirky. 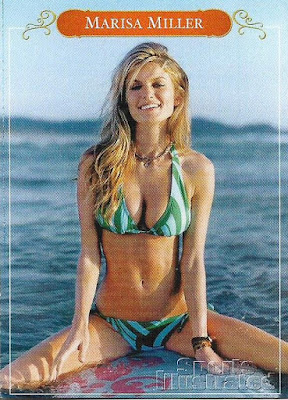 I'm pretty sure I've said this before: there are not enough cards of Marisa Miller. I have 16 more cards of Aaron Harang than I do Marisa Miller. How in the world does this make sense? 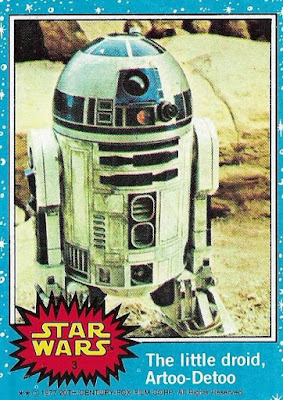 The '77 Star Wars cards and the 1980 Empire Strikes Back cards take me right back to the thrill of those two movies and collecting the cards. If I had any of the '80 ESB cards still, I'm sure at least one of them would make this list. But I really like this card and how R2-D2 is spelled "Artoo-Detoo". 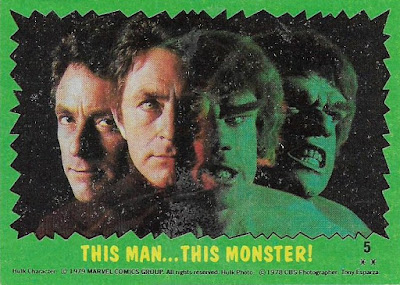 Two straight cards off of my Nonsports Binder Page.

Before The A-Team, there was The Incredible Hulk as a must-see fave. What can I say? I grew up with cheesy and violent shows. This show was highly entertaining to me and this card in particular sums up the show.

It goes without saying that there aren't nearly enough cards about TV shows these days. That doesn't matter much to me now because I don't watch any of the shows currently on TV. But there are plenty of shows from the past  that would have killed if they were card sets. I happen to be partial to sitcoms and all my money would be gone if there were sets for Cheers, Seinfeld, Taxi, WKRP in Cincinnati, Spongebob Squarepants, you name it. 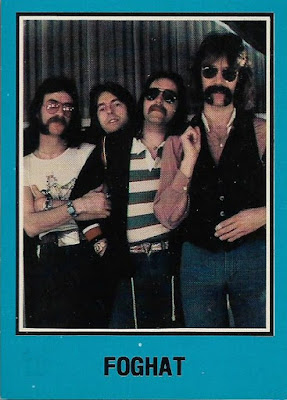 Every year on January 1st, I say my mantra, which is: "My resolution for the year: 'More Foghat, less caring about what people think about Foghat". That's my way of saying, "I understand my old, obsolete world and I don't care if you think it's old and obsolete."

Because no one under the age of 40 is interested in '70s supergroups, no one is clamoring for these 1977 Warner Brothers promo cards. That's good, because I had fully intended to pick up more of these cards a long time ago and stupid baseball got in the way again. I have to make these a priority. 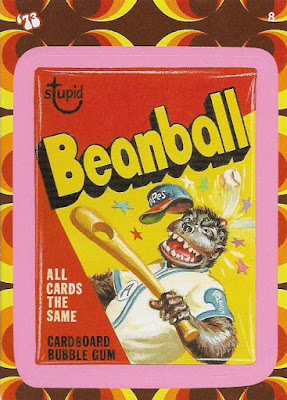 If this was the actual Beanball sticker from the original 1973 Wacky Packages, this would be listed at No. 1. The only trading card set that can compare to 1975 Topps in terms of unearthing a treasure trove of childhood memories is the 1970s Wacky Packages stickers. The Beanball spoof on the Topps 1973 baseball wrapper has always been my favorite (I suppose someone would say this qualifies as "sports," but it's really nonsports Wacky Packages that I'm paying credit to here).

One day, I will attempt to collect those original stickers (I'm assuming some are very pricey). 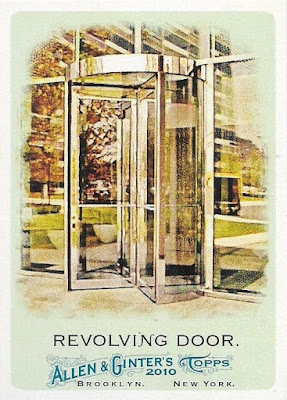 I hope you knew this was going to be first.

Revolving doors are fascinating to me and have been since the time I was 7. I should have a card of every last fascinating thing that I see in my lifetime, blobfish, somoa donuts. There NEEDS to be cards of these! At least I have the revolving door taken care of.

Unfortunately, I do not own any nonsports cards from famed 1950s sets (I once had some but traded/sold them before the nonsports bug hit), or fish and bird cards from the original Allen & Ginter. I've never been into super-ancient cards, even the baseball kind.

However, five years from now, I expect my nonsports collection to be much more robust than it is now, and a countdown of my favorites then will probably be a lot more interesting.

Still, I'll be back to baseball/sports as soon as I hit publish on this post.

Billy Kingsley said…
Awesome! I'm really glad that my countdown has inspired a few other bloggers to do their own. I've enjoyed every post and this is no exception. I've got four of the 12 you chose- sadly not the Marissa Miller, hah.

I bought the Santa set a while back. Interesting set, it even includes and autograph and a relic card.
January 29, 2018 at 8:01 PM

Hoarding Cardboard said…
I got very excited about the Rashida Jones card at the top. Then disappointed that it didn't appear again. Then excited as I realized there is a Parks and Rec trading card set out there.

At least I hope that's a card, and not a poster or something.

Hackenbush said…
Fun post! It being just a month after Christmas the revolving door reminds me of Buddy the Elf.
January 29, 2018 at 9:04 PM

Commishbob said…
You need to see the revolving door at my endocrinologist’s office building. It’s crazy big. I’m gonna post a picture after my next visit.
January 30, 2018 at 1:08 AM

Jeremya1um said…
I love the revolving door card. On our first date, my wife and I went to Planet Hollywood in Orlando, and we went through a revolving door to get into the restaurant. Soon after that, I took my copy of the door card, and inscribed our names and the date on the card. It is one of the best cards in my collection.
January 30, 2018 at 7:37 AM

Hackenbush said…
Odd coincidence. About two hours after your post went up I got an unexpected e-mail from a friend of mine---Marissa Miller.
January 30, 2018 at 7:31 PM

Fuji said…
I don't know Mr. Owl... that Miss USA Nana Meriwether card is pretty fancy. Seeing that Foghat card reminded me that I left out some pretty cool music cards in the collection. One of these days I'll update my post with those cards... and when I do... I'm thinking that Hulk card will make an appearance too. That card is awesome!
January 30, 2018 at 9:15 PM