How will Topps manage this? 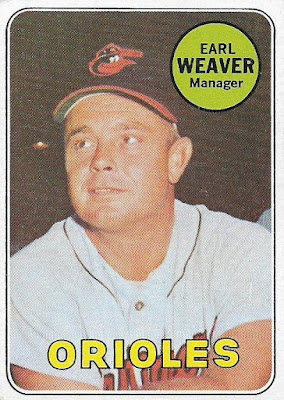 I was sorting through some cards yesterday while not torturing myself by watching the Patriots-Jaguars game, when it suddenly occurred to me that there were no manager cards in 2017 Topps Heritage.

I'm not sure why it took me almost an entire year to notice this. I don't recall reading mention of it (OK, here's a reference to it from almost a year ago), but it's definitely worth noting because Heritage's "thing," if you will, is representing that year's chosen past set as faithfully as it can. Last year's set to mimic was 1968 Topps and 1968 most definitely contained manager cards. 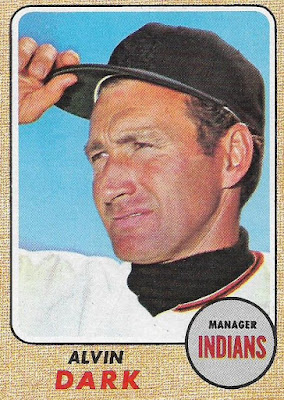 Why did manager cards suddenly disappear?

Up until last year Topps had no problem featuring managers in Heritage. The 1960s are the golden decade for manager cards and Heritage had stayed true to that decade each and every year: 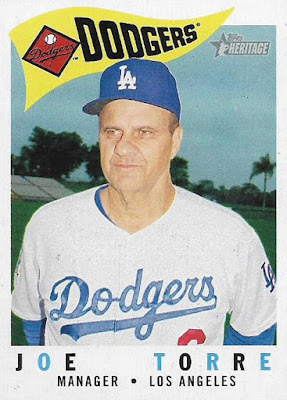 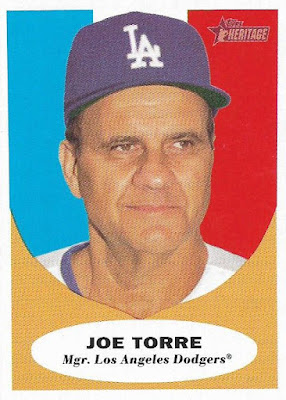 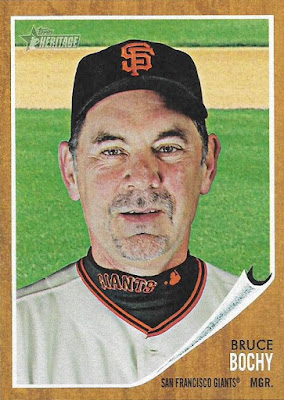 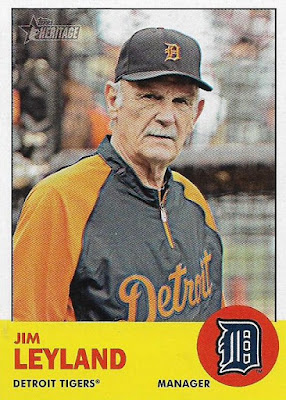 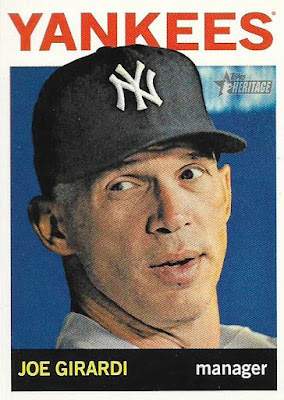 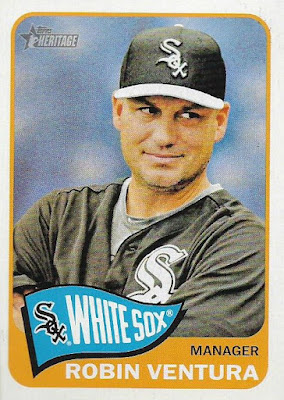 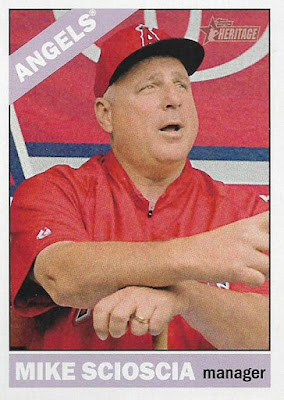 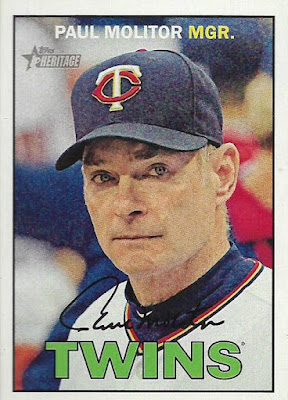 
Every year, there were manager cards, because that's what they did in the 1960s.

Until last year. When the managers vanished. 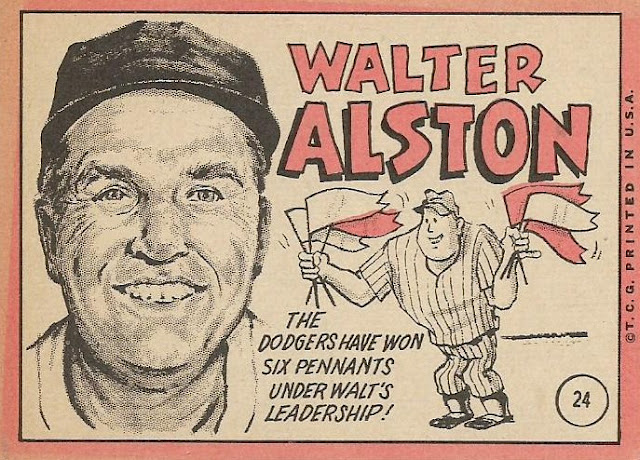 1969 Topps features one of the most memorable manager subsets in Topps' history. Each manager card in '69 contains captivating artwork on the back with a terrific likeness of each skipper.

This would be a highlight of this year's Heritage set, which will be paying homage to '69 Topps.

But now I have my doubts that we'll see this.

The absence of managers from 2017 Heritage forces me to draw only one conclusion: this is somehow related to the contract with Major League Baseball. I know managers aren't part of the Players' Association, but this has never stopped managers from appearing in Heritage before. I've never heard of a Managers Union. Perhaps managers have acquired their own licensing deal? Or is it one of those things where everyone is off limits unless they sign on the dotted line? Whatever happened, it has to be something fairly recent.

I don't know what the answer is and I certainly don't want to go digging around into the legalese of it all. The card industry has been ruined by all of the legal restrictions enough as it is. Undermining Heritage would be just one more nail in the modern-card collecting coffin for me. (I'm already put off by Heritage stuffing all the stars in the short-prints). 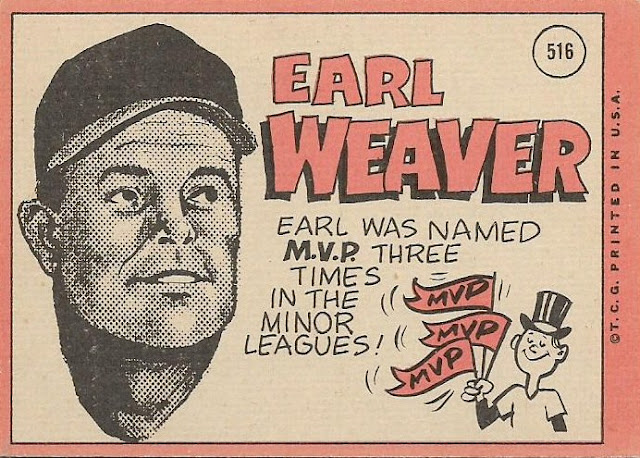 With illustrations like these, this is the worst time to stop issuing manager cards.

Jeremya1um said…
You are absolutely right. It’s bad enough that they don’t have managers or coaches in the flagship brand, but it was refreshing to see them in Heritage and pull one every now and then. I only get a pack or two or Heritage every year, so I would have never known this is you hadn’t made this post.
January 22, 2018 at 7:40 PM

Angus said…
I always enjoyed pulling team cards (whether they were the photos or team leaders), record breakers, league leaders and manager cards when I was a kid. I still see some league leader cards but don't really like what they consider team cards now. I hope the manager cards return.

As an aside, one of the earliest record breakers that I remember pulling as a kid was the 1977 OPC record breaker of Minnie Minoso. I asked my dad about him and started learning about the history of baseball and the Negro League.
January 22, 2018 at 8:14 PM

Nick Vossbrink said…
I like that you suspect the contract while I'm inclined to believe that Topps realized that the managers were taking up spots which could otherwise go to rookies.
January 22, 2018 at 8:17 PM

Chris Mays said…
I'm betting Topps just didn't care about Heritage enough to put them in. It seems to me like Heritage is less and less like the original set every single year.
January 22, 2018 at 8:55 PM

steelehere said…
Wasn't there a fairly popular blogger that took a job at Topps a few years ago? I'm not 100% sure who it was but I remember that he or she followed your blog. Whoever it is was might be able to answer this question.
January 22, 2018 at 9:19 PM

Old Cards said…
Interesting observation, but their omission does not bother me. The problem with manager cards is I don't have an extra slot for them in my 9 pocket sleeves, after I put in my lineup of pitcher thru leftfielder.
January 22, 2018 at 9:50 PM

Trevor P said…
I wouldn't mind seeing managers in Heritage this year. To me, the more pressing question is what is Bruce Bochy doing on Night Owl's blog?
January 22, 2018 at 10:40 PM

Stubby said…
What I've read is that managers have to sign individually. And, with many managers being former stars who were collector favorites, their asking prices got too high. I believe this actually has gone on for a few years as, in recent seasons, some teams had manager cards and others didn't. I didn't grouch because Terry Collins always made the cut. Topps probably had had enough of the extra negotiations and money. Or maybe someone complained about some teams getting manager cards and other teams not (possibly a Mets fan tired of all the Terry Collins cards). Personally, I do wish they'd go back to having manager cards, which look great in the old designs. The new style team cards are useless and ugly to me, and the new "combo" cards feel uninspired, but a manager is part of the team. A pretty important part, I'd say. Less so (IMO) in the season's outcome than in the team's identity. I know my Topps '69 and '70 Mets team sets would feel incomplete without cardboard of Gil Hodges. And Terry Collins is gone and I'm gonna need a Mickey Callaway.
January 22, 2018 at 11:21 PM

Fuji said…
I'll boycott this year's Heritage if they don't include their iconic manager card backs.
January 23, 2018 at 12:56 AM

Anonymous said…
I forgot all about those awesome backs on 1969 manager cards... but face it, they can't just reuse cartoons like they do with other Heritage sets. No matter how Topps would do it (actual drawings, Photoshop simulations of drawings), it would probably be a disappointment.
January 23, 2018 at 8:52 AM

Jeremya1um said…
I believe it was Suzy something. I want to say she is referred to as "Sooz", and I've seen stuff about her on the Topps website. It's too bad that Topps doesn't employ more collectors to finalize their checklists instead of some guy who just graduated college and doesn't know a lick about sports or collecting.
January 23, 2018 at 10:50 AM

Jim from Downingtown said…
I have a running feature on my blogs titled "That's Just Topps Being Topps" (which, for full disclosure, I paraphrased from a statement I once heard ex-76ers coach Jimmy Lynam say about Charles Barkley - "That's Just Charles Being Charles").

This is just another example of Topps' being either inept or greedy - two traits that they seem to have perfected over time.
January 23, 2018 at 6:18 PM